Society Aug 28, 2018
The ratio of working mothers in Japan has passed 70% for the first time. However, a look at the breakdown behind this figure reveals a harsh reality.

More than 70% of Japanese mothers have jobs in addition to their childcare responsibilities. According to the Comprehensive Survey of Living Conditions published by the Ministry of Health, Labor, and Welfare in July 2018, the ratio of employed women who are currently raising children under the age of 18 hit 70.8% in 2017. By work type, part-time and other nonregular work was most common with 37%, followed by regular work at 24.7%, while self-employed and other types of work stood at 9.1%. The ratio for those not employed was 29.2%. The proportion of working mothers has risen by more than 10 percentage points since 2007. 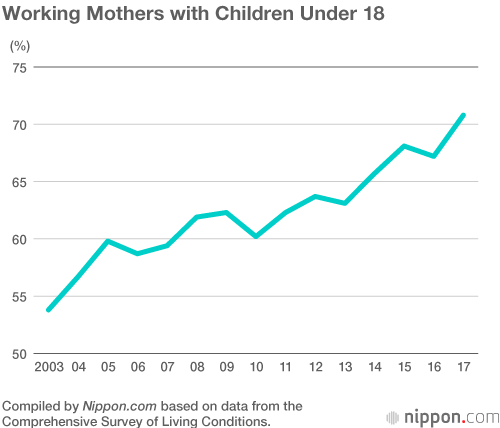 At 57.6%, more than half of mothers with a youngest child under one year old were not employed; however, as the age of the youngest child rises the ratio of those who do not work drops. Yet the rise in employment is mainly seen in an increase in mothers taking nonregular jobs. The highest ratio for mothers who have regular positions is 29.9% for those with two-year-olds, and the regular employment ratio remains between 20% and 30% for all age ranges, despite the overall rise in mothers with jobs.

While the number of working mothers is increasing, the door to regular employment cannot be said to be completely open yet. 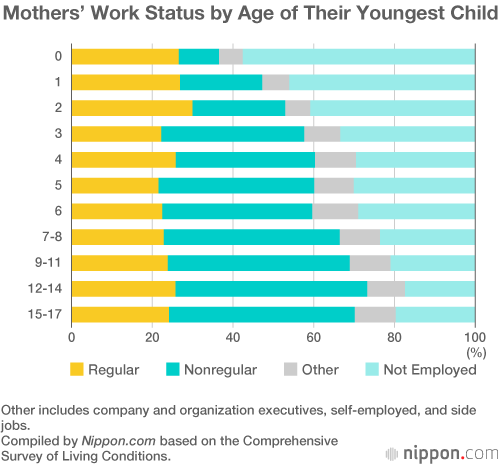