Thirty Cups a Year: The Enduring Popularity of Instant Noodles

Society Aug 24, 2018
Nissin launched its Chicken Ramen, the world’s first instant noodle dish, on August 25, 1958. Sixty years on, these easy-to-prepare meals are a global staple, with more than 100 billion servings sold each year around the world.

August 25 is marked each year in Japan as “Instant Ramen Day.” On this day in 1958, exactly 60 years ago, Nissin Foods released Chicken Ramen, the world’s first instant noodle product. At the time it was revolutionary: Put the freeze-dried block of noodles in a bowl, pour hot water over it, and in minutes you had a serving of ramen. The simplicity of the dish was a massive hit, and just half a decade later, in 1963, Nissin was selling some 200 million servings a year. And this market dominance was only reinforced with the 1971 launch of Cup Noodle, the first prepackaged instant noodle dish to hit global shelves.

The Cup Noodle brand gained fresh fame around the world in February 1972, when radicals from Japan’s United Red Army took a hostage and triggered a standoff with the police in the town of Karuizawa, Nagano Prefecture. The police officers assigned to the Asama-Sansō Incident, as this came to be called, found that the standard bentō meals they were issued quickly froze solid in the bitter cold of the Nagano mountain winter. When they were instead issued Cup Noodle servings, and images of the police slurping steaming-hot noodles while on duty went out on news broadcasts, the product saw its name recognition skyrocket. Other companies were quick to enter the market after this, and the competition in the prepackaged instant noodle space heated up rapidly. 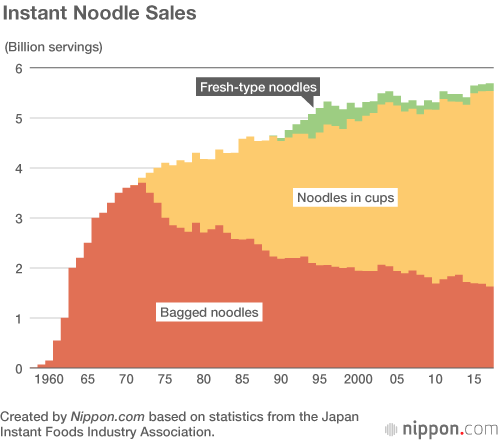 According to data from the Japan Instant Foods Industry Association, in fiscal 2017 Japanese consumers purchased a total of 5.69 billion servings of instant noodles. Of these. 3.98 billion were prepackaged in cups, while bagged noodles accounted for 1.63 billion servings, and “fresh-type noodles,” which are not flash-frozen or freeze-dried, amounted to 155.7 million servings. The total consumption in Japan reached an impressive 44.8 servings for each person in the country over the course of the year.

Growth of the domestic market as a whole has slowed since the turn of the millennium, but within the total, cup-style noodles have continued to gain ground, reaching an all-time high in unit sales in fiscal 2017. The average Japan resident eats some 30 servings of instant noodles in cups each year, making it a clear candidate for Japan’s most popular instant meal.

Instant noodles, a Japanese invention, have seen similar growth in popularity all around the world, in 2017 racking up worldwide sales of more than 100 billion servings. China, the largest national market for the products, consumed 38.6 billion servings last year. South Korea, meanwhile, took the per capita consumption crown, with around 74 servings per person per year in 2017. 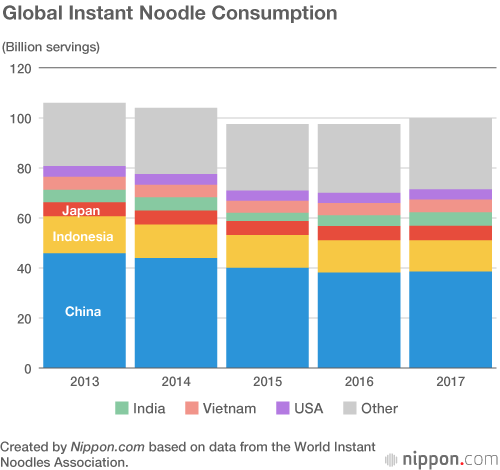