Society Sep 4, 2018
During the late twentieth and early twenty-first century, Tokyo expanded to the west with the development of new bedroom communities. However, western Tokyo’s population is expected to shrink dramatically over the next few decades.

The National Institute of Population and Social Security Research estimates that by 2045 all of Japan’s prefectures aside from Tokyo will have fewer residents than in 2015. This is a sobering indication of full-scale population decline. Even in Tokyo, which alone is expected to experience growth, there will be stark differences between municipalities.

A continuous influx of residents from regional Japan to Tokyo in the postwar era has boosted the ongoing growth of the metropolis. When there was no longer room in the central 23 municipalities, residential development radiated out and areas in western Tokyo and surrounding prefectures boomed as bedroom communities. From 1985 until 2015, central Tokyo’s population grew by 10.7%, while western Tokyo’s population grew by 24.5%, showing how the city has expanded westward.

Compiled by Nippon.com based on data from the Tokyo Statistics Division, and the National Institute of Population and Social Security Research.

The estimated population for Tokyo in 2045 is 13.61 million, representing an increase of just 0.7% compared with 2015. However, western Tokyo is expected to decrease by 7.6% to 3.84 million, which is a drop of more than 300,000. The populations of Hachiōji, Machida, and other cities in this area soared by more than 30% from 1985 to 2015, but are anticipated to drop by 10% or more by 2045. Only five western cities near central Tokyo, such as Mitaka and Chōfu, are expected to increase in population. By contrast, the population of central Tokyo is expected to grow by a further 4.6%. Having expanded westward, Tokyo will contract back toward its center. 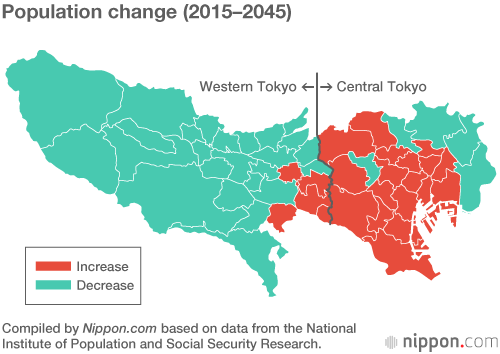 Within central Tokyo, the rate of increase is highest in the three central municipalities of Chiyoda, Chūō, and Minato, where a 30% increase compared with 2015 is anticipated. A succession of large-scale tower apartments is being built in central Tokyo to meet the demand for housing near to workplaces, and this trend is expected to continue in the future. Meanwhile, the eastern municipalities of Edogawa, Katsushika, and Adachi, close to Chiba Prefecture, are expected to shrink in population by about 10%. Even though they are part of central Tokyo, the overall population is expected to move even nearer to the city center for greater convenience.