“Mottainai!” Japan Wastes Around 6.5 Million Tons of Food Per Year

Society Sep 10, 2018
Every day the average amount of food thrown out by a Japanese person could fill up an entire rice bowl. This food waste stands in contradiction to Japan’s low food self-sufficiency rate of 40%.

The late Wangari Maathai, the first environmentalist to win the Nobel Peace Prize, was so impressed by the Japanese concept of mottainai that she sought to promote its use as a common global term to protect the environment.

It turns out, however, that the country that brought the world the mottainai concept, Japan, throws out a huge amount of food. Statistics compiled by the government show that in fiscal 2015 the amount of “food loss”—defined as any food intended for consumption that is unsold, past its expiration date, or left over—totaled 6.46 million tons. That translates to a daily average of around one rice bowl full of food waste per person—or roughly 136 grams. Meanwhile, Japan’s food self-sufficiency rate in 2015 was just 39%. In other words, despite a heavy reliance on imports, Japan is still throwing out a huge amount of food. 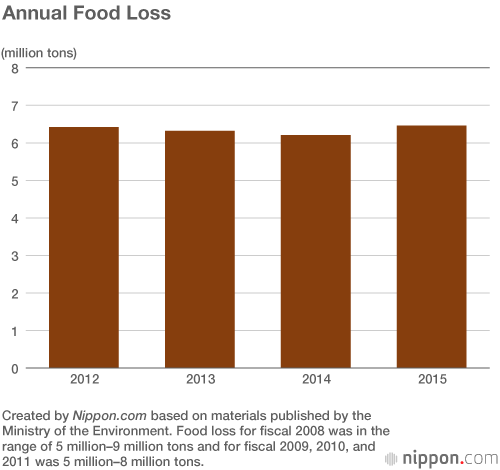 One cause of food loss is the commercial distribution practice known as the “one-third rule.” Under this practice, food makers or wholesalers should deliver products to retailers within the first third of the period that runs from the production date to the final sell-by date. If they are unable to meet that deadline, the retailers have a right to refuse the deliveries. This practice was intended to ensure that consumers receive consistent quality for food products but the time constraints are much tighter than in other countries, resulting in food makers and wholesalers throwing out a huge amount of food with no quality issues. A commission has been set up with the assistance of the Ministry of Agriculture, Forestry, and Fisheries to reconsider the commercial practices of food makers and wholesalers. Initiatives already launched include relaxing the time frame from one third to one half in the case of drink products and snacks.

There has also been an increase in “food bank” organizations that provide food products free of charge to social welfare institutions and people living in poverty by repurposing “dead stock”: products in circulation or storage that are nearing their expiration dates, products considered substandard at the manufacturing process, and unconsumed products in households. 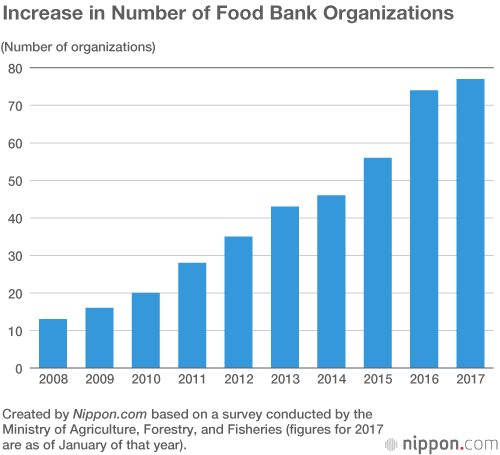 According to MAFF, there were 77 food bank organizations in Japan as of January 31, 2017, which represents a six-fold increase over a period of 10 years. The relative poverty rate in Japan, which indicates the proportion of low-income persons vis-à-vis the total population, was 15.6% in 2017. This level is significantly higher than the 11.4% average in 2013 among countries belonging to the Organization for Economic Cooperation and Development. Although Japan is an affluent country, many of its citizens are living in poverty. And despite relying on imports for its food supply, Japan is also throwing out a huge amount of food. It is hoped that the activities of food banks might help to alleviate, to some degree, those two contradictions.

Around half of all food loss comes from households. A survey conducted by MAFF found that around 20% of all raw garbage generated from households consists of unconsumed food products, and about a quarter of that food garbage is made up of products thrown out prior to their expiration date. MAFF and the Ministry of the Environment are emphasizing the importance of household initiatives to reduce food loss, encouraging citizens not to buy too much and to use and consume all that they buy.