Departure Rate for Japanese in Their Twenties Rebounds to 1990s Levels

Society Sep 28, 2018
Newly released figures show that 2.83 million Japanese traveled abroad during the 2018 summer holidays, 4.1% more than in the same period last year. The number of Japanese going abroad rose steadily from when restrictions on overseas travel were eased in 1964 and peaked at 18.49 million in 2012. Now young Japanese travelers are once again showing growing interest in foreign destinations.

The April 1, 1964, lifting of restrictions on overseas travel by Japanese citizens inaugurated the era of tourism abroad. Prior to that time, Japanese had gone overseas primarily for business or study. The freedom to travel abroad was occasioned by Japan’s abolition of foreign currency controls under International Monetary Fund rules. In 1964, 128,000 Japanese went overseas. In subsequent years, this number rose steadily thanks to a variety of factors: the spread of overseas package tours, the adoption of a floating exchange rate for the yen in 1973, the strengthening of the yen following the Plaza Accord of 1985, rising domestic incomes, and more countries exempting Japanese from the need for tourist visas. 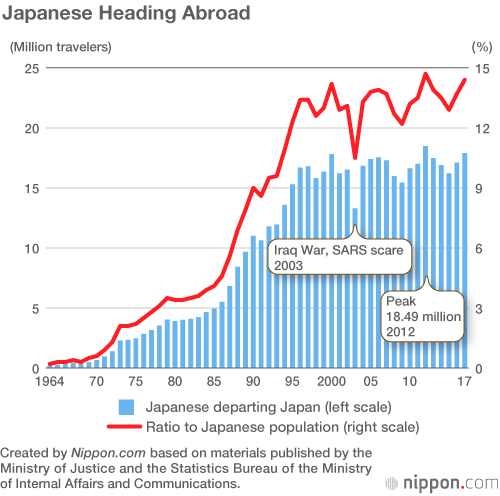 In 2000, 17.8 million Japanese traveled overseas; this number peaked at 18.5 million in 2012. Anywhere from 15 million to 18 million Japanese go abroad annually, except for in 2003, when numbers declined sharply due to the Iraq War and SARS (severe acute respiratory syndrome), a viral disease that broke out in Asian destinations that year.

While the number of Japanese going abroad has held steady overall, this has not been the case for young people. Among Japanese in their twenties, 4.6 million went overseas in 1996, the peak year; only 2.6 million did so in 2008. In terms of population, the number of Japanese in their twenties is dropping, going from 18.8 million in 1996 to 11.9 million in 2017. The departure rate among those aged 20–29 also registered a drop, going from 24.6% in 1996 to 18.4% in 2008. Compared to the mid-1990s, when the departure rate for young Japanese was highest, fewer young people have been going abroad since the mid-2000s, a trend reflected in an overall drop in the departure rate for this demographic. 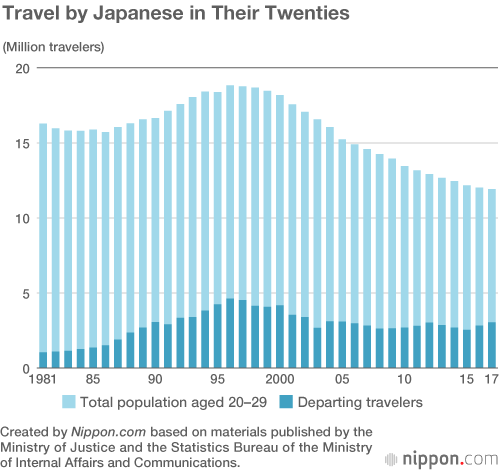 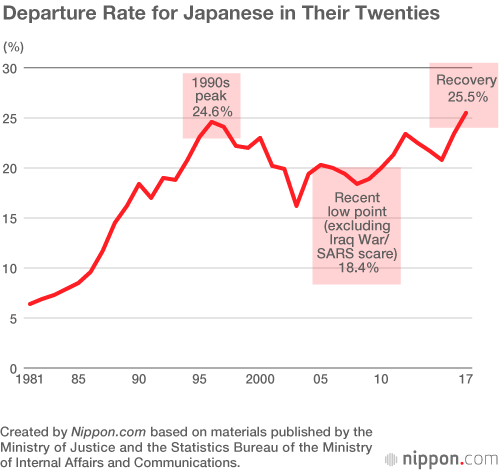 But a look at trends for overseas travel since 2010 shows that in 2012, some 3.03 million Japanese in their twenties departed Japan; the departure rate was 23.4%. In 2017, 3.05 million did so, yielding an all-time high departure rate of 25.5%. Due to population decline, actual numbers of young Japanese departing have not returned to the levels seen in the 1990s, but the departure rate has rebounded to mid-1990s levels. This fact may presage a resurgence in foreign travel by young Japanese.

(Originally published in Japanese on September 20, 2018. Data compiled by Nakamura Tetsu, professor at the College of Tourism and Hospitality of Tamagawa University. Banner photo: A crowded check-in counter at Narita Airport on July 4, 2015. © Jiji.)