Society Sep 11, 2018
Strong winds and flood tides caused by Typhoon Jebi shut down Kansai International Airport when it hit the area on September 4. The airport resumed partial operations on September 7. Concerns are high that the closure of this major arrival point for incoming foreign tourists, and the impact on imports and exports, would damage Kansai’s economy.

The powerful Typhoon Jebi made landfall in both Shikoku and the Kansai region of Honshū on September 4 this year. Widespread damage was reported, but receiving a particularly heavy blow was Kansai International Airport, where runways were flooded by the storm surge and a tanker smashed into the bridge connecting the island airport to the mainland, causing serious damage to some of the bridge’s girders. The airport closed on the afternoon of September 4 and resumed partial operations three days later, on September 7.

Kansai International Airport (KIX) first opened on September 4, 1994. It is an airport built on two artificial islands in Osaka Bay, which makes for less noise pollution for mainland residents, enabling it to be the first airport in Japan to have 24-hour operations for both passenger and cargo planes. After the economic downturn triggered by the global financial crisis of 2008, as well as sluggish tourism after the 2011 Great East Japan Earthquake, a second terminal was made operational for exclusive use by low-cost carriers in October 2012. This caused a surge in the number of arriving international flights and passengers from East Asian countries like China, Taiwan, Hong Kong, and South Korea.

The total number of passengers at KIX in 2017 was the highest ever of 28.8 million, and the number of international passengers was 21.9 million—exceeding 20.0 million for the first time. Approximately 70% of these passengers were foreign tourists using Kansai as a base for their travels, and they played a role in boosting the regional economy. 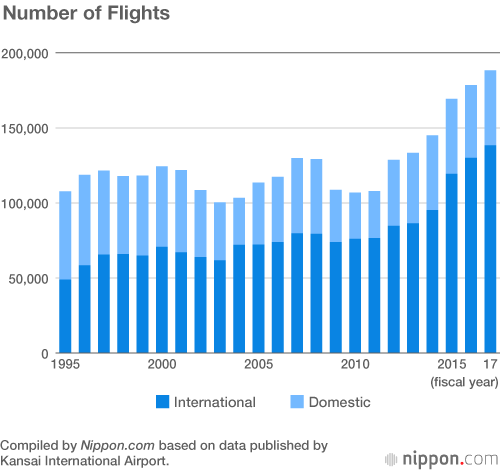 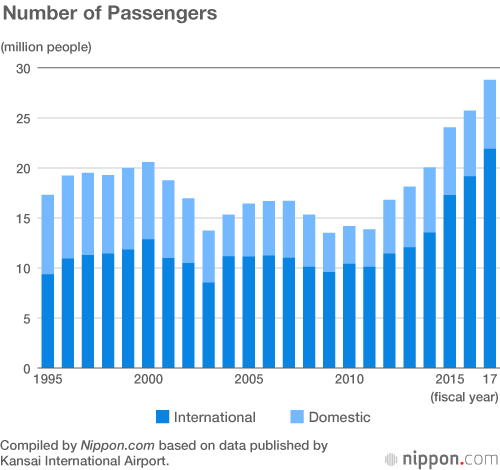 The value of goods exported and imported through Kansai International Airport is the second highest in Japan after Chiba’s Narita Airport, which serves the Tokyo region. Exports in 2017 increased 11.1% from the previous year to ¥5.64 trillion; ¥1.29 trillion (23%) was in electronic components like semiconductors. Additionally, imports increased 10.9% to ¥3.94 trillion, with top items including pharmaceuticals and communication equipment. 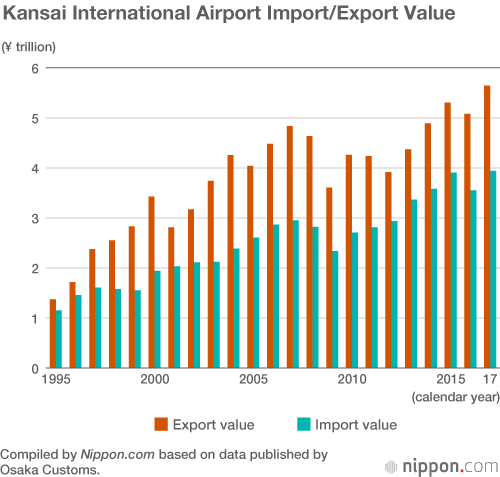