Shaking in the North: The History of Hokkaidō’s Earthquakes

Society Sep 7, 2018
A September 2018 earthquake rocked south central Hokkaidō, with its epicenter near the island’s main New Chitose Airport. The magnitude 6.7 shake registered 7 on the intensity scale, making it only the sixth ever to do so since modern records began. We look at the history of Hokkaidō’s seismic activity in recent decades.

In the predawn hours of September 6, 2018, at 3:08 am, a powerful earthquake struck Japan’s northernmost main island of Hokkaidō. Its epicenter was in the Iburi region of the island, southeast from the main northern air gateway of New Chitose Airport. The shake registered 7 on the Japanese intensity scale in the town of Atsuma; it was the first time for a quake in Hokkaidō to hit the top of this scale. The nearby towns of Abira and Mukawa experienced 6-upper shaking, while 6-lower shaking came to the municipalities of Chitose and Hidaka, and 5-upper shaking impacted much of the south of the prefecture, including parts of the capital, Sapporo, and the city of Tomakomai.

According to the Japan Meteorological Agency, the quake had a magnitude of 6.7 and a hypocenter some 40 kilometers beneath the earth’s surface. Major landslides were triggered in Abira and Atsuma, where deaths have been confirmed, and power generation was halted at all thermal power generation plants in the prefecture, leaving nearly 3 million households without power across all of Hokkaidō.

Below we present a table of earthquakes in Hokkaidō in recent decades. All quakes registering 6 or higher on the seismic intensity scale beginning in 1980, and all quakes with an intensity of at least 5-upper since 1996, are listed. Most of these temblors had epicenters along the shore or offshore from the southern and eastern reaches of the island; it is relatively rare for one to take place inland. 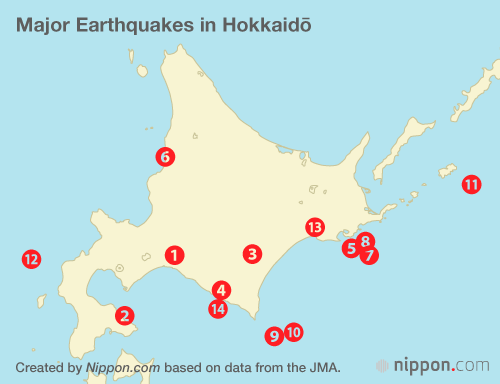 Created by Nippon.com based on data from the JMA.

Notes: The lower and upper subscores for intensities 5 and 6 were introduced in April 1996. There was no seismometer installed on Okushiri Island, which suffered serious damage in the July 12, 1993, quake; we use the estimated figure given on the Okushiri municipal government’s website.

(Originally published in Japanese. Banner photo: Landslides caused by the earthquake in the town of Atsuma, Hokkaidō, photographed on the morning of September 6, 2018. © Jiji.)