Japan’s Daycare Waiting Lists Below 20,000 for First Time in 10 Years

Society Sep 19, 2018
The number of children on waiting lists for daycare facilities in Japan has dipped under 20,000 as of April 2018—the first time in 10 years. But the government’s goal of matching all children with care services remains elusive.

Information compiled by the Ministry of Health, Labor, and Welfare shows that 19,895 children were waiting to enter authorized daycare centers in Japan as of April 1, 2018, a year-on-year decrease of 6,186. This is the first decrease in four years, and the first time since 2008 for the figure to be under 20,000. Major factors underlying the fall include the expansion of daycare facilities at business sites through government support and the construction of new daycare facilities. 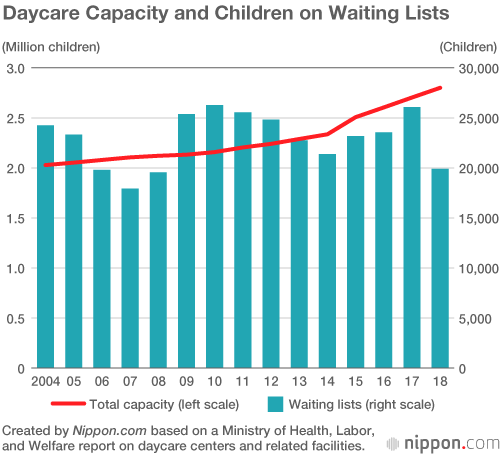 The government introduced a plan in 2013 to accelerate the elimination of daycare waiting lists. One aim was to free up young mothers from daily childcare activities, letting them return to the workforce, based on the view that women’s activities are a key to revitalizing the economy. The authorities set the goal of reducing the number of children on waiting lists to zero by the end of fiscal 2017, such as by increasing local-government daycare centers and expanding company-run daycare systems. But heightened daycare demand has arisen as women come to play a more active role in the workforce, and that demand is not easy to meet given the difficulty of constructing new daycare facilities in Japan’s urban centers due to high land prices. The government ultimately decided to push back the target for placing all children in daycare by three years, to the end of fiscal 2020.

If the decrease in waiting lists continues on from the spring of 2018, could the goal of eliminating waiting lists altogether be achieved? That seems unlikely given the increased demand that could arise if the hurdle to entering daycare facilities is lowered so that more people seek employment. And additional demand is expected to arise when the government makes daycare free of charge in October 2019.

Around 70% of all children on daycare waiting lists are concentrated in large urban areas like Tokyo and the Kinki region that includes Osaka and Kyoto. In parts of these areas, demand for daycare services can shoot up suddenly due to the construction of large apartment complexes, for example, making it difficult to provide slots for a suddenly larger population of young children. So just as the goal of reducing waiting lists seems to be within sight, it often moves farther away. Reducing daycare waiting lists to zero is certainly no simple task.