Education Family Society Oct 4, 2018
The financial gap between public and private schools in Japan is wide. Average educational expenditures for one year of a private elementary school are ¥1.528 million, compared to ¥323,000 for a public school. And the financial burden on parents and guardians is even greater if they enroll children in private schools all the way up to university.

Parents and guardians in Japan who have children enrolled in private elementary schools pay 4.7 times more for educational expenditures—including school fees, meal costs, and extracurricular activities—than those whose children attend public elementary schools according to a survey by the Ministry of Education, Culture, Sports, Science, and Technology. This reflects the wide financial gap between private and public education.

Difference in Educational Costs Between Public and Private Schools

Created by Nippon.com based on the “Fiscal 2016 Survey on Children’s Educational Expenditures” issued by the Ministry of Education, Culture, Sports, Science, and Technology.

One major factor underlying the wide gap between public and private elementary and junior-high schools is that tuition is free for public compulsory education. A comparison of elementary school fees, which includes additional school-related expenses for excursions, uniforms, and commuting to and from school, reveals that children in private schools are charged on average ¥870,408, roughly 14.5 times more than the ¥60,043 for children at public schools. Comparing the two pie charts below reveals that the cost difference between public and private education is not simply a matter of paying tuition or not, but also the result of the higher costs in the case of private schools for all the other expenditures. 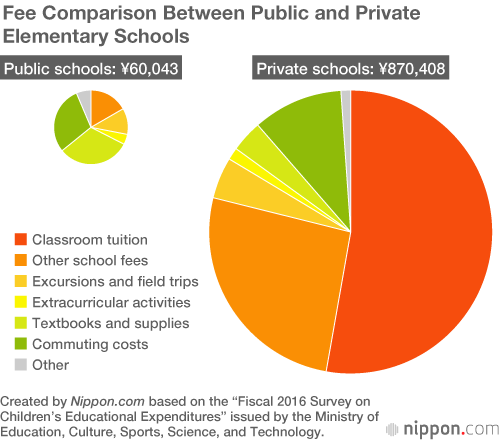 The average cost of education for a student from the age of three, upon entering nursery school, up to graduation from high school, is ¥5.4 million in the case of public schools, compared to ¥17.7 million for a student who only attends private schools. In other words, it costs parents or guardians more than three times more to educate a child exclusively at private schools. 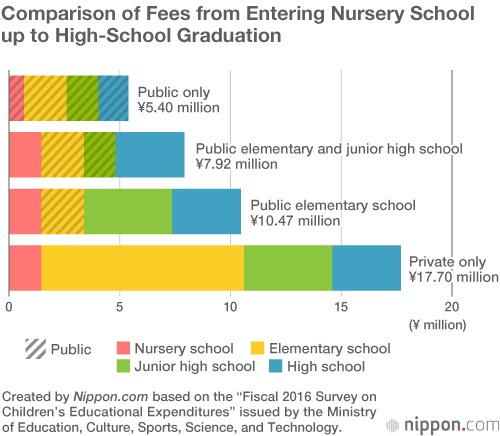 The “Fiscal 2018 Survey on Student Life” published by the Japan Student Services Organization notes that average university costs in Japan for that year were ¥642,500 for national universities, ¥661,300 for other public universities, and ¥1,360,900 for private universities. A student who exclusively attends private schools, from nursery school up to university graduation, would thus require, on average, over ¥23 million just to cover school expenses.