Society Oct 24, 2018
A wrap-up of Japan’s 2019 national holidays, including special holidays to commemorate the beginning of a new imperial era.

Japanese people will enjoy 10 consecutive days off in Golden Week 2019, due to a special national holiday for when Crown Prince Naruhito becomes emperor. At the first meeting of a committee that will decide the particulars of ceremonies related to the imperial succession, the accession of the new emperor was scheduled for May 1, 2019, which will become a national holiday. The enthronement ceremony is due to take place on October 22, 2019, and will also be a national holiday. An official announcement is expected to be made after the extraordinary Diet session this autumn. According to laws pertaining to national holidays, a weekday sandwiched between two holidays also becomes a holiday. This means April 30 and May 2 will also become holidays, making Golden Week 10 consecutive days long next year.

The highlighted national holidays above are scheduled to be officially determined at the extraordinary Diet session beginning on October 24. They are one-off holidays for 2019 only.
Compiled by Nippon.com based on data from the Cabinet Office website. 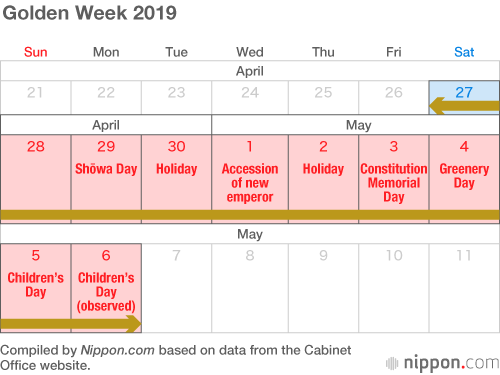