Society Nov 9, 2018
A record high number of bullying cases was reported during the 2017 academic year. One major factor behind the increase is the growing trend toward proactively identifying and responding to bullying at schools.

During the 2017 academic year, reported cases of bullying at elementary, junior high, and high schools rose year on year by 28%, to a new record high of 414,378, according to a study on problematic student behavior and school absenteeism conducted by the Ministry of Education, Culture, Sports, Science, and Technology (MEXT). This is equivalent to 30.9 reported cases per 1,000 students. The breakdown by schools was 317,121 cases at elementary schools, 80,424 at junior high schools, 14,789 at high schools, and 2,044 at special-needs schools; all of the figures were increases over the previous year.

In emphasizing the early detection of and response to bullying, MEXT has defined that term as any action that causes the victim mental or physical suffering, whether it takes place at school or not. The rapid increase in the reported cases of bullying at school seems to reflect the growing effort to proactively identify cases before they worsen, rather than a sudden deterioration in the environment for students.

There is little room for complacency, however. There were 474 “serious” cases of bullying during the 2017 academic year, 78 more than the previous year. Such cases are defined under the anti-bullying legislation enacted by the Diet in 2013 as any action that leads to serious mental or physical damage, considerable financial loss, or threatens the life of the victim. 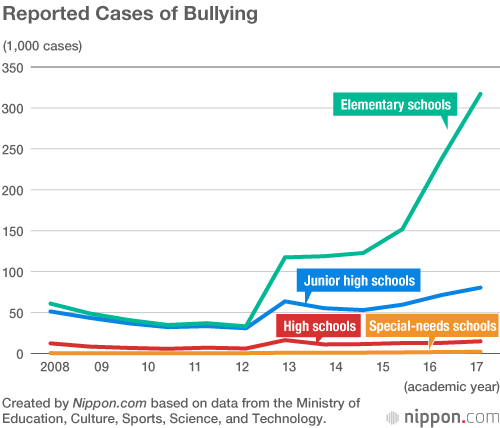 The MEXT study examined the types of bullying and found that the majority of the cases, or 62.3%, involved teasing and insults, followed by 21.0% involving students who were run into or struck and kicked in the guise of play, and 14.1% who were excluded from groups or ignored (multiple reasons were allowed).

Online bullying via social media services such as Line accounted for 3% of all bullying and 17.5% of high-school bullying, with a total of 12,632 cases reported in 2017.