Over 80% of Japanese Would Welcome Robot Caregivers

Society Dec 4, 2018
Amidst Japan’s shortage of caregivers, more and more are open to the idea of receiving care from a robot.

Robots may help ease a chronic labor shortage in graying Japan. A survey conducted by a Tokyo-based senior care provider found that over 80% of respondents took a positive view toward the use of robots for nursing care.

While 13.1% were more enthusiastic, saying that they would “like to receive nursing care from robots,” a further 71.2% said that they would be willing to receive such care if recommended to them. This is the most favorable attitude to nursing-care robots since this question was first introduced in the survey in 2011. Only 14.7% were opposed to the use of robots. 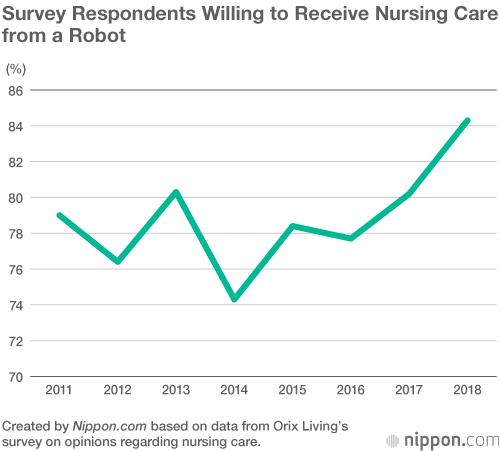 Many were positive toward robots because they felt a psychological burden from being cared for by another person, with 51.3% saying that not having to worry about a robot’s welfare was a plus and 27.2% commenting that they feel more reticent around human caregivers even though they provide better care than a robot.

Meanwhile, among those opposed to robot caregivers, the primary reason cited was that they wanted to receive care from a real person, but this was the first time since the survey was conducted for that reason to be chosen by less than half of the survey respondents. 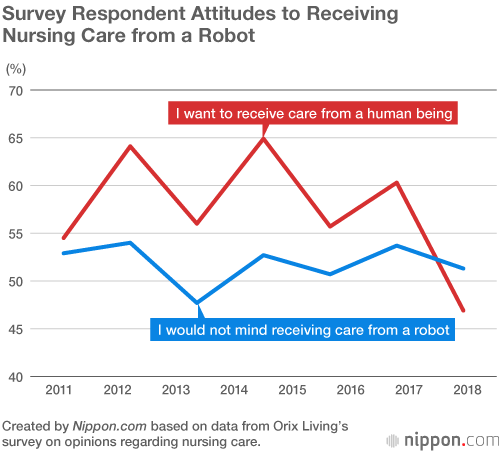 When asked what sort of robot they would like to use if they needed nursing care, more women than men were open to the idea of receiving robot assistance for their general life needs.

Created by Nippon.com based on data from Orix Living’s survey on opinions regarding nursing care.