The World Exposition is coming to Osaka for the second time, as the Japanese city has been chosen to host the event in 2025.

The 1970 Osaka Expo, held six years after the 1964 Tokyo Olympics, was a huge success with what was then the largest ever attendance of an expo at 64,220,000 people. It was held in the midst of Japan’s high economic growth period, and improvements to railway networks and expressways were timed to be ready for its opening.

This time, the second Osaka Expo will come five years after the second Tokyo Olympics. There are high expectations for this expo to repeat the success of the first. However, while in 1970 Japan was in a growth period, in 2025, it will be in a mature one. Japan is no longer building basic infrastructure; its present issues are how to undertake maintenance or renew infrastructure—like expressways, power generation facilities, and water mains—that has been in use for more than half a century while keeping cities functioning.

Due to advances in medicine and treatment techniques, between 1970 and 2017 life expectancy increased by 11.78 years for men and 12.60 years for women. Japan is known as one of the world’s leading countries for life expectancy. On the other hand, the number of children has dropped drastically. There were 1.93 million babies born in 1970, but only 940,000 in 2017. The increasing number of older people living longer is being supported by a population with a small birth rate.

It is symbolic that the sub-theme of the 2025 Expo is “sustainable socioeconomic systems.” The question will be how the prosperity attained through growth can be sustained.

Key Elements of the Two Osaka Expos and Social Background

Compiled by Nippon.com based on data from the Osaka Prefectural Government website and Ministry of Health, Labor, and Welfare demographic statistics. 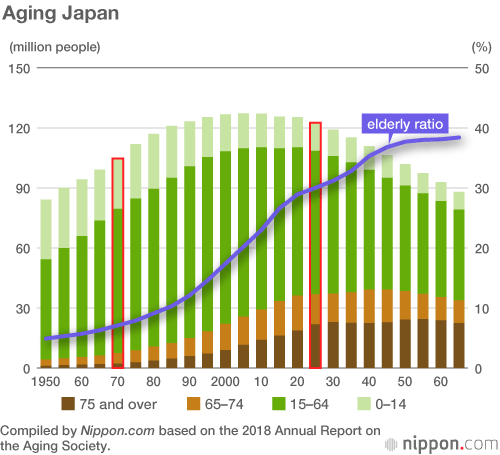 Organizers estimate that 28 million people will visit the 2025 Expo. This is less than half of the visitors to the 1970 Expo, but considering recent attendance numbers is quite an ambitious figure. At a time when overseas travel was a luxury, the Expo pavilions offered a rare opportunity to experience the culture of countries from around the world. Now, people can easily take trips anywhere or search online for information about far-flung countries. Expos face competition from facilities like theme parks in each area too. The biggest challenge therefore will likely be how to convey the attractions of the expo and get people to visit.

Highlighted events are authorized fairs that were held in Japan on a relatively smaller scale with specific themes. The attendance figures for Dubai 2020 and Osaka 2025 are estimates.
Compiled by Nippon.com based on reference materials from the Osaka Prefectural Government.

(Translated from Japanese. Banner photo: The Tower of the Sun at Expo '70 in Osaka. © Jiji.)