Society Dec 17, 2018
University students in Japan are becoming less sexually active. The increasingly sex-positive trend from the 1980s and 1990s reversed after a mid-2000s peak.

A survey by the Japanese Association for Sex Education in 2017 found that 36.7% of female university students have had sexual intercourse. The figure has tumbled 25.5 percentage points from the 2005 peak of 62.2% and is also considerably lower than 1990s survey results: 50.5% in 1999 and 43.4% in 1993. There has been a tendency in Japan to view males as latecomers to love, with many headlines about “herbivore men,” who have little interest in sex. But the survey results reveal that women seem even more cautious.

JASE has been conducting the survey roughly every six years, starting in 1974. In 2017, survey responses were received from 4,449 junior-high students, 4,282 high-schoolers, and 4,194 university students. Up to 2005, there had been a steady rise in the percentages of university students who had gone on a date, had their first kiss, and lost their virginity, but those percentages leveled off and then decreased in subsequent years. In particular, there has been a sharp drop in the percentage of women who have had sexual intercourse, as compared to men. For both men and women, the percentage of those who have gone on a date was at the lowest point since the survey was first conducted. 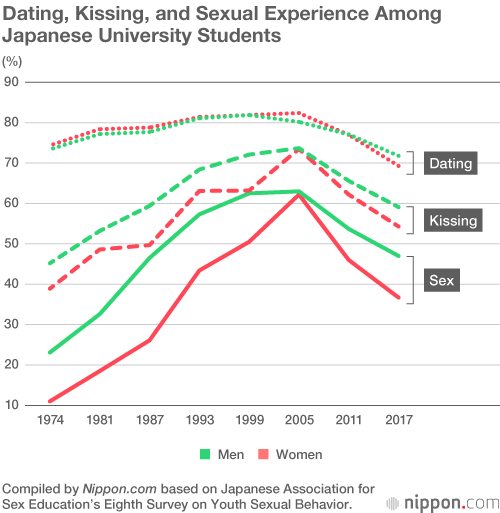 Among the multiple responses cited by university students for why they were still virgins, both men and women listed “lack of a partner” as the most common reason, followed by “still too young.” Women were more likely than men to cite such reasons as “lack of sexual desire,” “aversion to sex,” or “too much hassle.”

Reasons for Having No Sexual Experience (University Students/Multiple Answers)

Compiled by Nippon.com based on the Japanese Association for Sex Education’s Eighth Survey on Youth Sexual Behavior.

The percentage of women who agreed that sex was enjoyable has decreased compared with 2005, while the percentage with a negative view has risen. 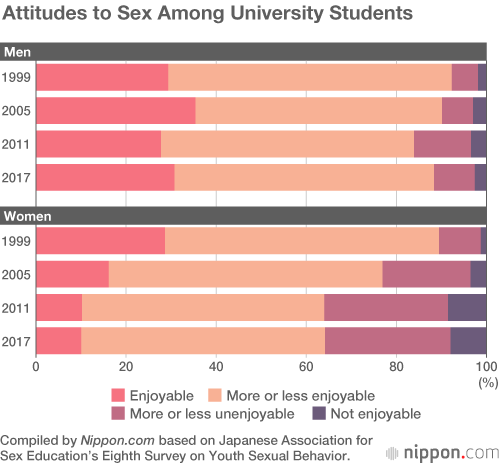 JASE noted that there has been a prominent trend among youth, particularly women, toward less and less sexual activity. It stated that women clearly have a more negative image of sex and have become more cautious in their attitudes. The association aims to consider the connection between this trend and the surrounding social environment.