Society Dec 21, 2018
The much-proclaimed “death of the printed word” is belied by the ongoing popularity of public libraries in Japan.

Statistics on libraries in Japan released by the Japan Library Association show that the collections at public libraries in 2017 totaled 442.82 million books, and that there were 691.47 million loans of books over the course of the year. Although the 2010 to 2013 level of around 710 million loans has not been reached over the past four years, the level remains quite high.

A look at changes over the years since the JLA began conducting surveys in 1993 reveals an upward trend in the size of library collections, the number of books checked out, and the number of library-card holders. One factor that has stimulated library use has been the extension of opening hours into the evening so people can stop by after work, as well as raising the limit for the number of books that can be checked out. In addition, the graying of Japan’s population has meant that more retirees are spending their afternoons in libraries. 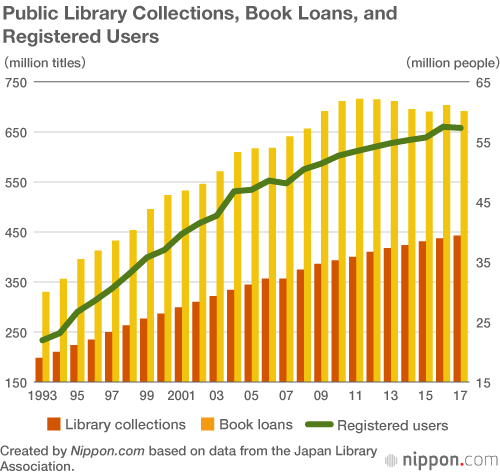 The active use of libraries in Japan would seem to contradict the idea that people are moving away from the printed word. But some have pointed out the down side of this situation for publishers and authors.

Quite a few adept library users continually submit loan requests for new books so that they can read them at almost the same time they are published. Libraries that want to increase the number of books checked out are purchasing multiple copies of popular new books and focusing on services for users. For publishers and writers, such uses of libraries are having a negative impact on sales of new books, exacerbating the poor business conditions within the publishing world.