Snow Country: Northern Japan Home to Some of the World’s Heaviest Snowfall

Society Dec 25, 2018
Heavy snowfall in Japan is concentrated in areas along the Sea of Japan, whereas the Pacific coast is rarely buried by blizzards. The climatic difference is due to mountain ranges that stretch down the northern part of the main island of Honshū.

Northern Japan in winter receives some of the heaviest snowfall in the world. Mapping based on snowfall records compiled by the Japan Meteorological Agency shows how the accumulation of snow in the north is concentrated in inland areas that are closer to the Sea of Japan than the Pacific Ocean.

In winter, cold, dry air blowing in from the Asian continent absorbs heat and water vapor as it passes over the Sea of Japan, generating snow clouds. When the clouds collide with the Ōu mountain range that runs north to south through the center of the Tōhoku region and the Echigo mountain range stretching further south, they drop their moisture as snow at the foot of the mountains. The intensification of winter weather patterns leads to heavy snowfall even in many low-lying areas, requiring extensive snow-removal operations.

In contrast, the Pacific coast side—particularly coastal and low-lying areas—has many dry, sunny days, the result of winter winds drying as they pass over the mountains. There is snowfall when conditions are right, but there are very few extended periods of heavy snow of the sort that occur on the Sea of Japan side.

Compiled by Nippon.com based on data of the Japan Meteorological Agency (ranking based on the top snowfall for each of the areas listed). 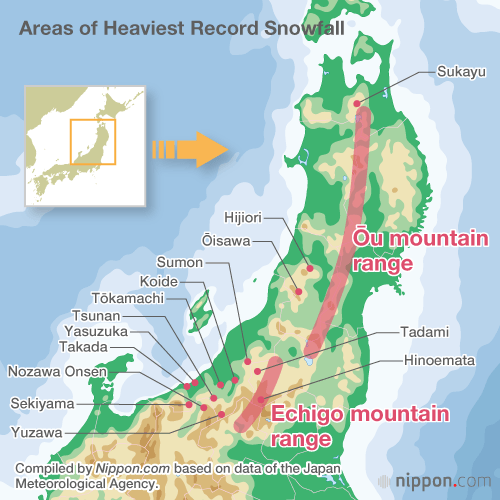 The heaviest snowfall on record occurred in 1927 at Mount Ibuki in Shiga Prefecture. Although located to the east of Kyoto, far south of Tōhoku, the area shares the same basic mechanism of snowfall, with damp air passing over the Sea of Japan and Lake Biwa before colliding with mountains to produce snow. Since that record snowfall occurred nearly a century ago, the methods used to measure the snowfall differ from those used today. Nevertheless, Mount Ibuki is listed by Guinness World Records as the heaviest snowfall ever recorded in a mountainous area of the world.

(Translated from Japanese. Banner photo: Sukayu, Aomori Prefecture, in February 2013, when it was blanketed with Japan’s second-heaviest snowfall on record. © Jiji.)