Society Jan 8, 2019
The trend toward replacing squat toilets with Western-style ones is accelerating in the run-up to the 2020 Tokyo Olympics and Paralympics.

High-tech toilets equipped with water jets are now standard equipment in many Japanese homes, but up to the 1960s it was more common for people to use traditional squat toilets. From around that time the use of Western-style toilets gradually spread, spurred by the decision of the Japan Housing Corporation (now the Urban Renaissance Agency) to equip its public housing units with them. According to Toto, one of Japan’s major toilet manufacturers, the number of Western- and Japanese-style toilets produced in 1976 were roughly the same, but thereafter the production of Western-style toilets increased rapidly. By 2015, squat toilets accounted for just 1% of all toilets produced by the company. 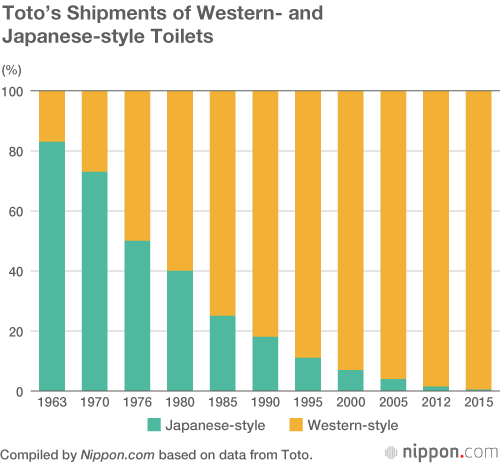 There is a movement to replace Japanese-style toilets with Western-style ones at elementary and junior high schools that serve as evacuation sites in the event of an earthquake, typhoon, or other natural disaster. This is a response to the situation at evacuation sites following the April 2016 earthquakes in Kumamoto Prefecture and the September 2018 earthquake in Hokkaidō. In both cases, elderly people lined up to use Western-style toilets because their weak legs meant that they did not want to squat. Many waited longer to go to the toilet or consumed fewer liquids.

A survey conducted in November 2016 by the Ministry of Education, Culture, Sports, Science, and Technology, found that Japanese-style toilets account for around 60% of all toilets at public elementary and junior high schools. The government is now considering implementing a goal to increase the proportion of Western-style toilets in those schools to 80% within the next three years. 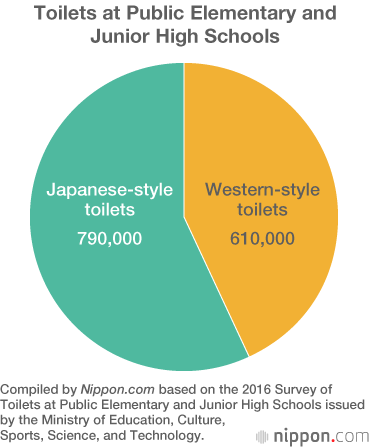 A 2016 survey conducted by the Japan Tourism Agency found that around 40% of 4,000 public toilets at major sightseeing spots in Japan were Japanese-style toilets. While some find squatting more hygienic, the overwhelming majority of people favor Western-style toilets. Foreign tourists in particular may not know how to use squat toilets or consider them unsanitary.