Whale Meat No Longer a Major Protein Source in Japan

Society Jan 7, 2019
In the early years of the postwar era, whale meat was a precious source of protein for the Japanese. But since the end of commercial whaling, very little whale meat has been distributed via ordinary retail outlets.

Whale meat was a precious source of protein in Japan during the period of rapid economic growth that followed the nation’s postwar recovery. One factor behind Japan joining the International Whaling Commission in 1951 was a desire to supply a rich protein source to its citizens through commercial whaling conducted under that organization.

According to the Food Balance Sheet issued by the Ministry of Agriculture, Forestry, and Fisheries, around 154,000 tons of whale meat were consumed domestically in fiscal 1960. During the following decade, annual consumption at times exceeded 200,000 tons. Up until around the 1970s, fried whale meat was a standard item on school-lunch menus.

From the 1970s onward, however, there was a steady decline in the consumption of whale meat as production of pork and poultry increased. In 1982, the IWC introduced a temporary ban on commercial whaling, and since 1988, when Japan froze its own commercial whaling, the amount of whale meat consumed has hovered around the level of several thousand tons. Since very little whale meat is distributed to supermarkets and other general retail outlets, consumers have to seek out this rare item at specialty shops and restaurants. 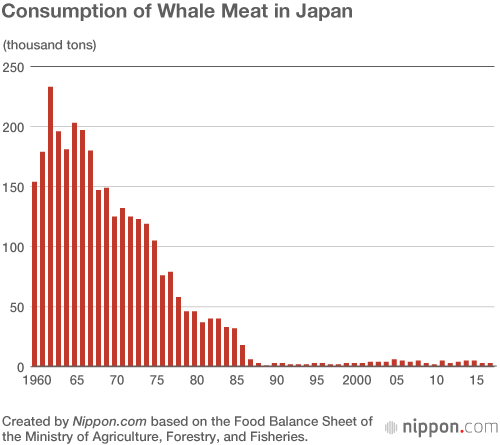 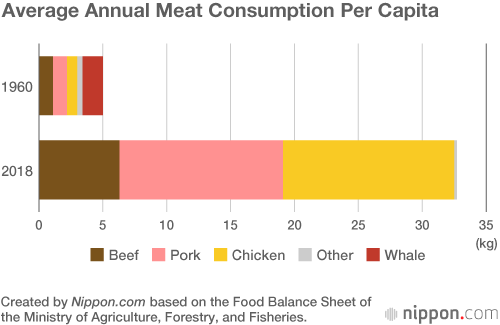