Health Society Jan 9, 2019
Since the 1980s, Japan has seen a dramatic decrease in cavities among children, demonstrating that school and other oral hygiene programs have been effective.

Over the past 20 years in Japan, efforts to fight cavities—the dreaded mushiba—among children have paid off with the country seeing a dramatic decrease in rates of tooth decay. Statistics on school children’s health released in December 2018 by the Ministry of Education, Culture, Sports, Science, and Technology (MEXT) show that 45.3% of elementary school students, 35.4% of junior high students, and 45.3% of high school students had cavities, including ones that had been treated. The finding marked a year-on-year decreases for all three groups and an all-time low for junior high school and high school students.

The long-term data for cavities among children reveals that in the 1980s over 90% of junior high school students had cavities. However, the rate began to decline in the 1990s until now only around one in three students suffer tooth decay.

Education programs have been key to improving dental hygiene. Japan in the past did little to promote cavity prevention among children based on the view that baby teeth would eventually be replaced by adult teeth. But starting in the 1980s, authorities have provided guidance to elementary and junior high school students on how to avoid cavities. Childcare magazines also began recommending that parents brush the teeth of their small children rather than letting them do it themselves.

In addition, candies and sweets made with artificial sweeteners that do not easily cause cavities became increasingly available, and fluoride toothpaste began to be more widely used. 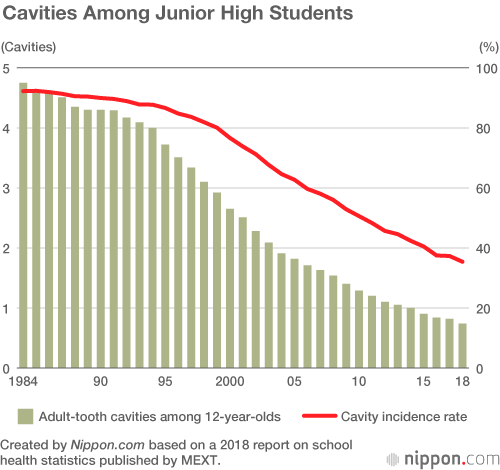 The government since 1984 has surveyed the rate of adult-tooth cavities among seventh-grade students aged 12 years old. This year the per capita cavity figure, which has been decreasing almost every year since the survey began, fell year-on-year by 0.08 to 0.74, marking a new low.