Getting Around in Tokyo: Basic Information on Airport Access and Transportation

Society Oct 15, 2014
Once travelers touch down in Tokyo, an intricate network of buses, trains, and subways awaits to whisk visitors from Narita and Haneda airports to destinations around the greater metropolitan area. Below we provide information on navigating the city quickly, easily, and inexpensively.

From Narita to Tokyo

Narita International Airport is located around 60 kilometers outside of Tokyo in Chiba Prefecture. Both of the airport’s international terminals feature fast and reasonably priced train and bus services which connect the airport to the city center and surrounding metropolitan area.

JR and Keisei railways offer regular train services from Narita Airport to Tokyo and the surrounding metropolitan area. Tickets for the various lines to and from the airport can be bought at service windows or from automated ticket machines located inside the terminal stations.

For those using JR trains, information on the Japan Rail Pass can be found below.

*Japan’s consumption tax increased to 8% in April 2014. Prices listed here may not accurately reflect current fares. Fares may be lower when using Suica, Pasmo, Icoca or other smart cards.

JR’s Narita Express, or N’EX, stops at the major metropolitan hub stations Shinjuku, Ikebukuro, Shinagawa, and Tokyo, as well as Yokohama and Ōfuna in Kanagawa Prefecture, Takao in western Tokyo, and Ōmiya in Saitama Prefecture. The fare between Narita and Tokyo station is ¥3,020 (reserved seating only). Fares for other destinations will vary according to distance. The N’EX Tokyo Direct Ticket allows travelers to ride ordinary reserved seating on the Narita Express one-way from Narita International to major destinations in Tokyo at a 50% discount of ¥1,500.

On weekends and public holidays between July 26 and November 30, 2014, the once-daily round-trip Narita Express service to Takao station will be extended to provide a direct service to Fujisan and Kawaguchiko stations via the Fujikyūkō line. 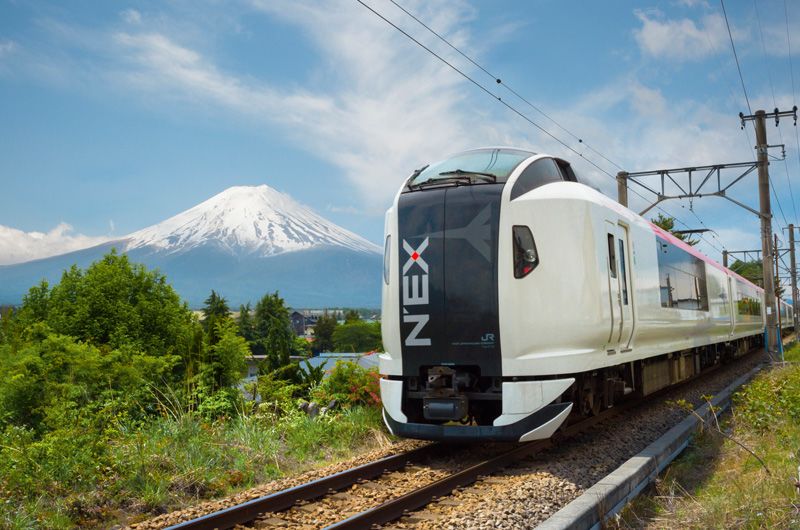 JR East’s Narita Express travels along the tracks with Mount Fuji towering in the background. (Image courtesy of JR East.)

From July 1 to November 30, passengers can purchase the Mt. Fuji Round Trip Ticket to travel round-trip between JR stations within Tokyo’s 23 wards, stations on the Fujikyūkō line, and Fujisan Gogōme. The two-day ticket is priced at a discount fare of ¥5,600 and gives travelers unlimited use of trains on the Fujikyūkō line and Fujitozan buses—which run between Fujisan station and Fujisan Gogōme—as well as passage on the JR limited express train between Tokyo, Shinjuku and Ōtsuki stations. The ticket is around half the normal price of traveling between Shinjuku station and Fujisan Gogōme, and can be used in combination with the N’EX Tokyo Direct Ticket. 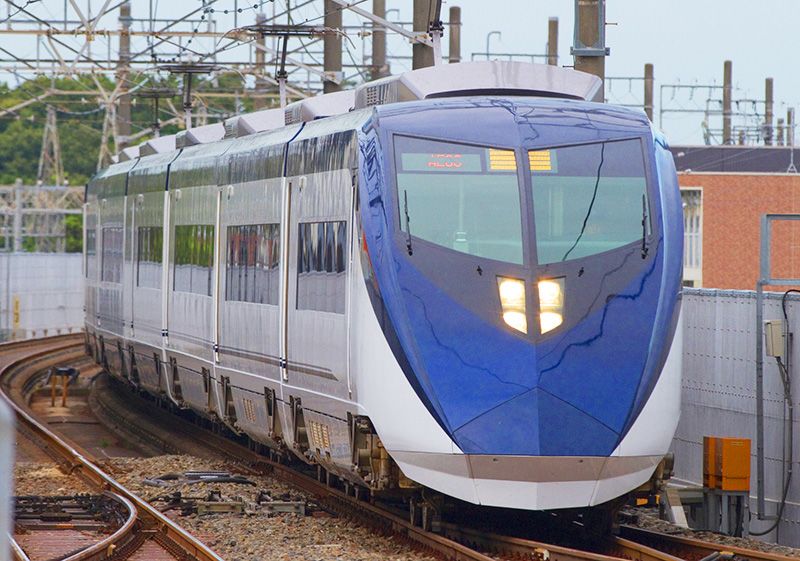 Keisei Railway’s high speed Skyliner connects Narita with Nippori and Ueno stations on Tokyo’s central Yamanote line in around 40 minutes at a cost of ¥2,470 (nonstop, reserved seating only). Travelers from overseas can receive a discount when reserving tickets in English via Keisei’s Skyliner e-ticket site. For those who do not mind taking a little more time to get to Tokyo, Keisei’s Access Express and limited express trains also travel to Ueno and do not require an express ticket.

Airport Limousine buses offer services to a wide variety of destinations in and around the metropolitan area, including major stations and hotels, and are a convenient choice for even the busiest of travelers. Tickets can be purchased at the service counters in Narita’s arrival lobbies and cost around ¥3,000 (fares vary by destination). All buses feature restrooms.

Haneda is Japan’s largest domestic hub airport, but also has an increasing number of international flights arriving and departing from its recently expanded international terminal. The Tokyo Monorail, Keikyū Railway, and Airport Limousine buses offer quick and inexpensive transportation to various destinations around the Tokyo metropolitan area. Bus tickets can be bought at the service counter in the airport arrival lobby, and monorail and train tickets are available at stations located within the airport. Taxis are also available, but will be more expensive.

Traveling Between Narita and Haneda Airports

For those needing to travel between Narita and Haneda airports, train services are available via the Keisei and Keikyū lines, but trains are infrequent and may require travelers to switch lines. Airport Limousine buses provide a direct service, making the trip in 65–85 minutes at a cost of ¥3,100.

Several discount tickets are available to foreign visitors to Japan that combine access from Narita and Haneda Airports with the Tokyo Subway Ticket, an unlimited Tokyo Metro and Toei Subway pass available in 1-, 2-, or 3-day varieties.

Information is available below for those interested in purchasing the Tokyo Subway Ticket only.

This set combines one-way or round-trip passage on the Keisei Skyliner with the Tokyo Subway Ticket. It is available at Keisei Line counters at both Narita Airport and Airport Terminal 2 stations. Travelers must show a valid passport to purchase the ticket.

This set combines the Tokyo Subway Ticket with a one-way ticket from Haneda Airport International Terminal Station to Sengakuji station on the Keikyū Railway. Many trains on the Keikyū line connect directly to the Toei Asakusa line at Sengakuji station, removing the need to change from the train to the subway. The set is available at the Keikyū Tourist Information Center located inside Haneda’s international terminal. Travelers must show a valid passport to purchase the ticket.

This set costs ¥1,200–¥1,900 according to the number of days on the subway pass (from one to three). Tickets are half price for children under 12 years old.

This set combines the Tokyo Subway Ticket with one-way or round-trip Airport Limousine Bus tickets from Narita and Haneda Airports to various destinations in Tokyo.

All sets are half price for children under 12 years.

The set includes a one-way fare from Narita Airport on the Keisei Tokyo Shuttle and the Tokyo Subway 1-Day Ticket. The price is ¥1,700 and the set can be purchased at the Keisei bus ticket counter in the arrival lobby at Narita Airport.

Getting Around by Train, Subway, and Bus

The JR Japan Rail Pass allows unlimited usage of most JR trains, buses, and ferries, as well as the Tokyo Monorail for up to 21 consecutive days. Foreign tourists visiting Japan are eligible for the pass, but must register before arriving in the country. To get the pass, purchase an Exchange Order from an authorized sales office before coming to Japan and then visit an exchange office to obtain the pass upon arrival.

There are two exchange offices for the Japan Rail Pass located in Tokyo station: the JR East Travel Service Center at the Marunouchi north exit and the JR-Central ticket office at the Yaesu central exit. Offices are also located at major hub airports and stations throughout the country. 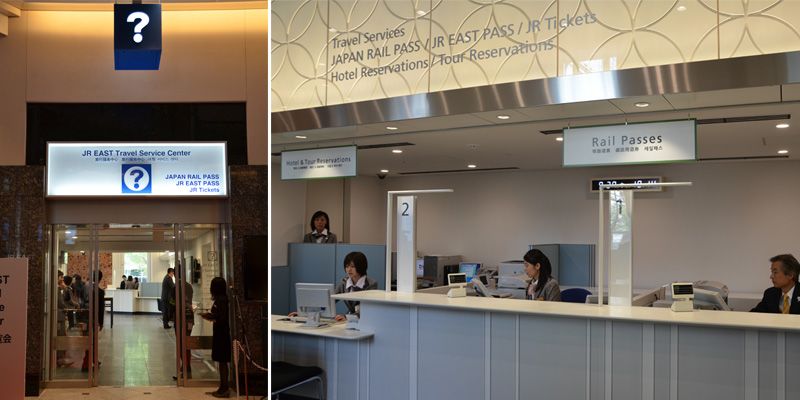 Travelers can use the JR East Travel Service Center to book hotel reservations, package tours, and train tickets. The center also has a travel concierge who can help answer travel questions as well as assist in planning trips. The center also offers a free Wi-Fi service.

Getting Around Tokyo Subways Smartly

Finding the way around Tokyo’s many subway lines can be an intimidating task for travelers. To help make it easier, Tokyo Metro has created a mobile application for foreign visitors called Tokyo Subway Navigation for Tourists. Available in Japanese, English, Chinese, and Korean, the application lets tourists check subway information on smartphones and tablets both on and offline.

See the Tokyo Metro website for information on other discount tickets.

This shuttle services the Marunouchi district, located between the west side of Tokyo station and the Imperial Palace. The bus takes 35–40 minutes to traverse the route from the Shin-Marunouchi Building near Tokyo station’s Marunouchi central exit through the main business district of Ōtemachi, along Hibiya-dōri, the main avenue running next to the Imperial Palace, past the Daiichiseimei Building, which was once the site of the General Headquarters of the Supreme Commander for the Allied Powers after World War II, and to Yūrakuchō station near the Ginza district. There are 12 stops along the route where passengers can board and exit freely. The shuttle runs daily (excluding New Year’s Day) between 10:00 a.m. and 8:00 p.m. with buses arriving at stops every 12–15 minutes.

This bus services the Yaesu, Nihonbashi, and Kyōbashi districts on the east side of Tokyo station. From the Yaesu exit of Tokyo station the bus takes 30–40 minutes to complete its route, which passes through Nihonbashi, the starting and ending point for all roads in and out of the city during the Edo period (1603–1868), past the main building of Japan’s 300-year old Mitsukoshi department store, next to the Bank of Japan, and then past Nihonbashi’s historical Takashimaya department store. The bus route traverses the area’s main avenue of Chūō-dōri, where there are many historical shops selling dried sheets of nori, along with Japanese confectionery, and other traditional goods. There are 14 stops along the route where passengers can board and exit freely. Metro Link runs daily between 10:00 a.m. and 8:00 p.m., excluding New Year’s Day, with buses every 10 minutes.

This shuttle services the relatively new districts of Odaiba and Aomi, which were developed during the 1990s. Starting from Tokyo Teleport station on the Rinkai line, the bus passes by DiverCity Tokyo Plaza, the iconic Fuji Television building, the National Museum of Emerging Science and Innovation (known as the Miraikan) the giant Ferris wheel at the Pallete Town shopping center, and other attractions and facilities along the 30-minute route. The shuttle features ten stops at which passengers can board and exit freely and runs daily between 11:00 a.m. and 8:00 p.m., with buses every 15–20 minutes.