Society Mar 19, 2015
The new Hokuriku Shinkansen service linking Nagano and Kanazawa went into action on March 14. We present a map of the new lines, along with information on the various services and carriage types, and a price list.

The Nagano Shinkansen, precursor to the Hokuriku Shinkansen, began its service between Takasaki and Nagano in October 1997. With the extension of the service to Kanazawa on March 14 this year, the line is changing its name to match the Hokuriku region that it now serves. The new service shares the section of track from Tokyo to Takasaki with the Jōetsu Shinkansen. Although it runs directly from Tokyo to Kanazawa, administrative boundaries in place since the privatization and division of the Japan National Railways in April 1987 mean that JR East has jurisdiction from Tokyo to the newly built Jōetsu-Myōkō Station, while JR West is in charge for the remainder of the route. 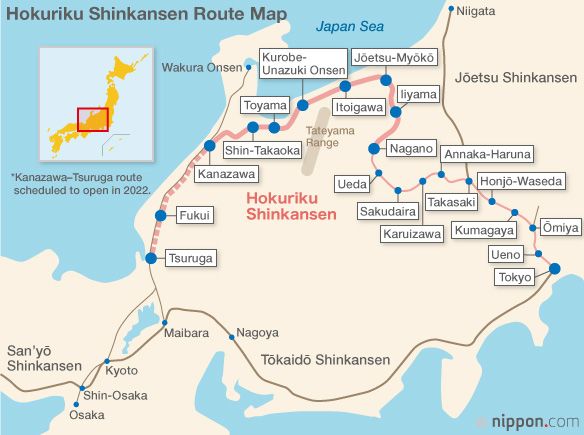 Stopping at almost all stations on the newly opened section of the line, the Hakutaka service—also making its debut—takes marginally longer, ferrying passengers between Tokyo and Kanazawa in 2 hours 50 minutes.

Stations between Toyama and Kanazawa are also catered for by the Tsurugi shuttle service, intended to link up at Kanazawa Station with passengers transferring to and from the Osaka–Kanazawa Thunderbird and the Nagoya–Kanazawa Shirasagi limited express services. Even including transfer time, the journey between Toyama and both Nagoya and Osaka has been shortened considerably compared to earlier routes.

The longstanding Asama service between Nagano and Tokyo (the former Nagano Shinkansen) remains in service at a reduced frequency. 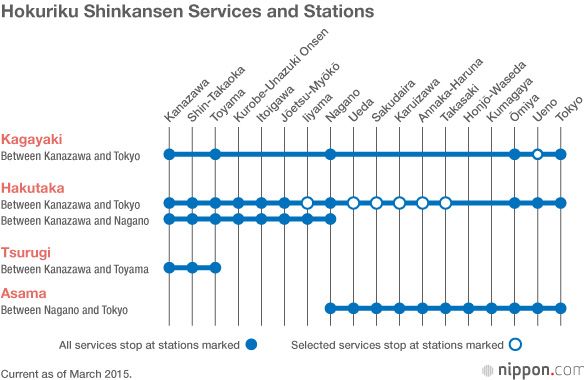 The entire fleet of trains in action on the Kagayaki and Hakutaka services is composed of brand new E7 and W7 models.

Luxury “Gran Class” cars at the front of these trains feature 18 spacious, automated, reclining leather seats, each with a footrest and reading lamp. Dedicated Gran-Class attendants are also on hand to serve light meals and drinks and to provide newspapers, magazines, and other complimentary items.

This carriage is followed by the Green Car, featuring paired reclining seats either side of a central aisle. As in Gran Class, these seats are also automated, with footrests and reading lamps.

In standard class, the seats feature 6 centimeters more legroom than on E2 models in action on the Asama service. Additionally, in a Shinkansen-series first aimed at boosting all-round convenience for passengers, every seat on each train is fitted with its own power socket. 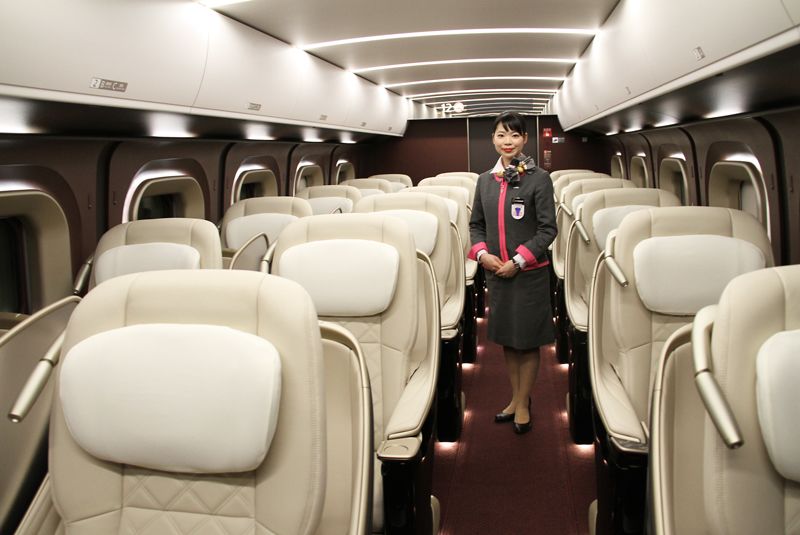 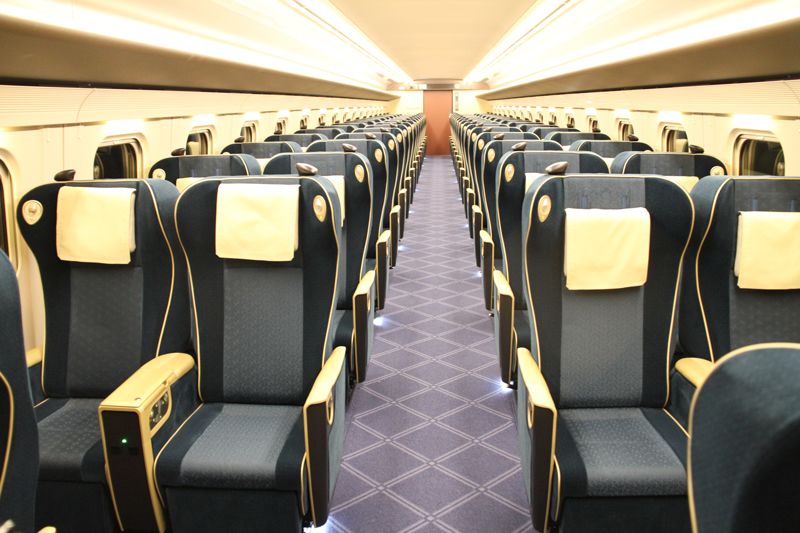 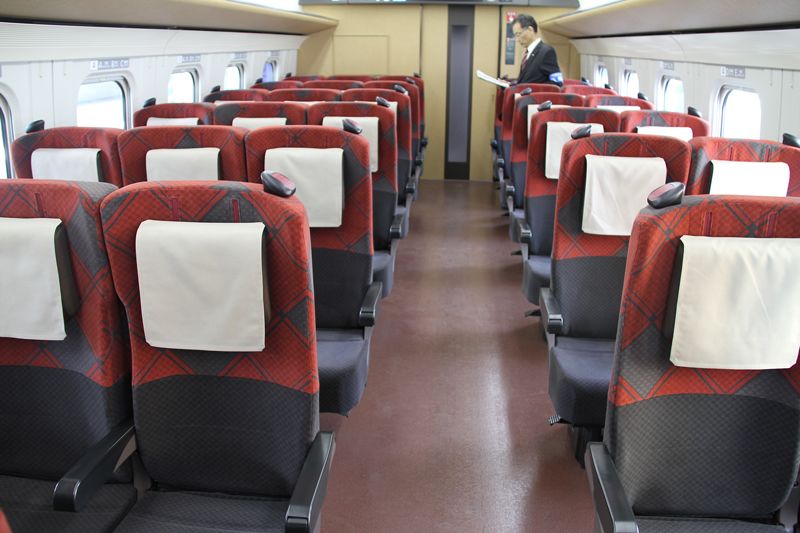 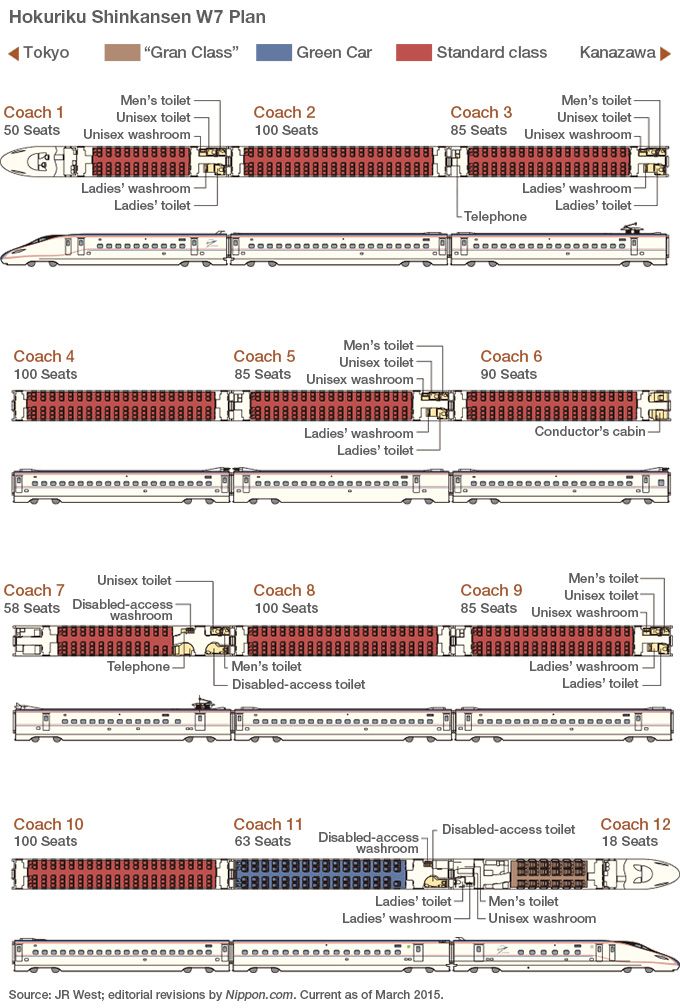 Fares may vary according to seat and carriage, but not among the individual services (Kagayaki, Hakutaka, etc.).

Travelers with a valid Japan Rail Pass may make use of any Hokuriku Shinkansen service for no additional fee. There are two types of ticket: ordinary ones granting access to standard class and Green Car tickets. In order to enjoy Gran Class, however, additional fees are required. For a journey between Tokyo and Kanazawa, for example, passengers will be charged a ¥6,260 limited express fee, along with ¥13,370 for a Gran Class seat (¥19,630 in total).

Rail Pass travelers should note that with the opening of the Hokuriku Shinkansen, control of several local lines that follow the same route switched from JR to other rail companies. The Japan Rail Pass is no longer valid on such routes.