Economy Society Guide to Japan Mar 25, 2016
We provide an overview of the new Hokkaidō Shinkansen offering service between Shin-Aomori and Shin-Hakodate-Hokuto Stations, including the route and fares, as well as nearby points of interest.

The opening of a roughly 148-km section of the Hokkaidō Shinkansen between Shin-Aomori and Shin-Hakodate-Hokuto Stations is the first stage of the new high-speed line, which once completed in 2030 will stretch approximately 360 kilometers to Sapporo Station. The Shin-Aomori–Shin-Hakodate-Hokuto span passes through the roughly 54-km long Seikan Tunnel, the world’s longest undersea tunnel, and includes two new stations, Oku-Tsugaru-Imabetsu and Kikonai. The Hokkaidō Shinkansen line will be operated by JR Hokkaidō.

Shin-Hakodate-Hokuto Station is about a 20-minute ride from Hakodate proper on the preexisting Hakodate Liner. Traveling on to Sapporo from the Shinkansen terminal currently takes upward of 3 hours 40 minutes by express train. 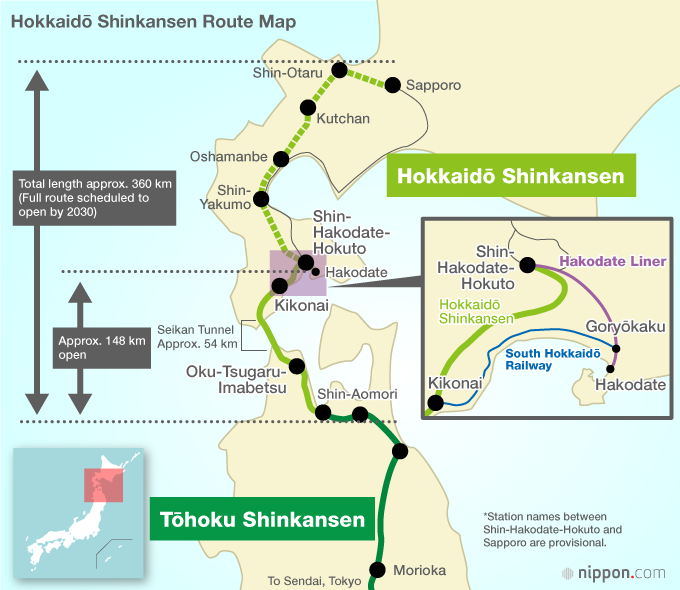 The Hayabusa express service will be extended from the Tōhoku Shinkansen line. There will be 10 northbound and 10 southbound trains per day directly connecting Tokyo and Shin-Hakodate-Hokuto. The fastest trains will link the two stations in just 3 hours 58 minutes, stopping only at Ōmiya, Sendai, Morioka, and Shin-Aomori along the way. 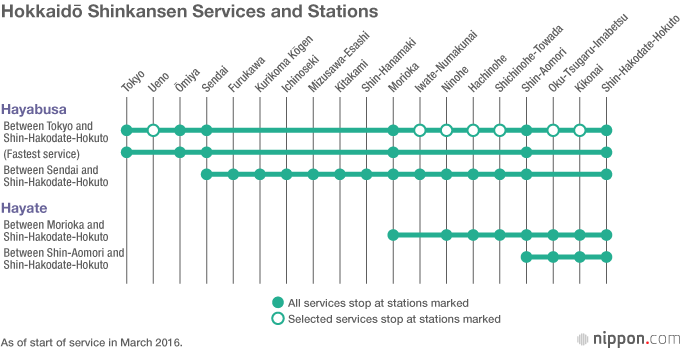 For the new Shinkansen line, JR Hokkaidō will introduce four H5-model trains, totaling 40 carriages. The H5 series has the same basic specifications as JR East’s E5 model, but the former sports a purple stripe along each side. The interior design also incorporates allusions to the culture and nature of Hokkaidō.

The Hayabusa service spanning Tokyo and Shin-Hakodate-Hokuto will consist of 10-car trains of either the H5 or E5 model. In keeping with the existing Tōhoku Shinkansen trains operating between Tokyo and Shin-Aomori, each train will include one “Gran Class” car and one Green Car. Both carriage types feature automated reclining seats with footrests and reading lamps. Every seat on the train, including those in the standard class, is equipped with a power socket. 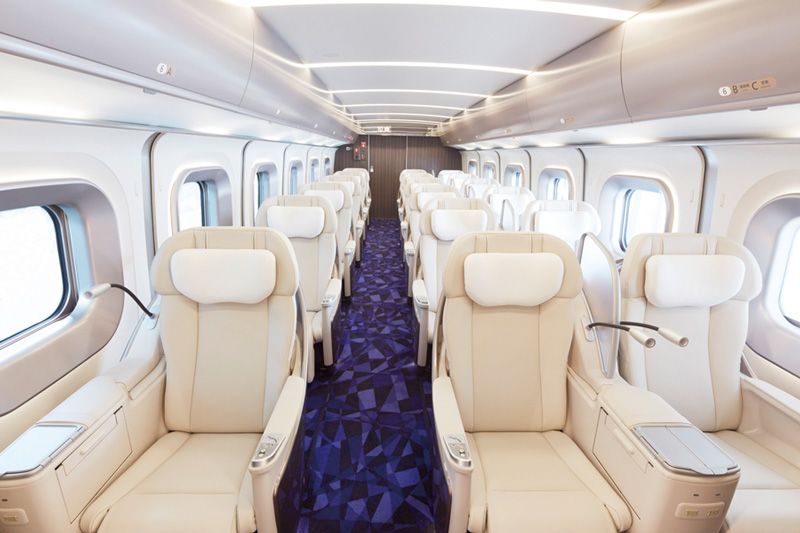 Interior of a “Gran Class” car, where dedicated attendants will be on hand on the Hayabusa service to and from Tokyo. (Photo courtesy of JR Hokkaidō) 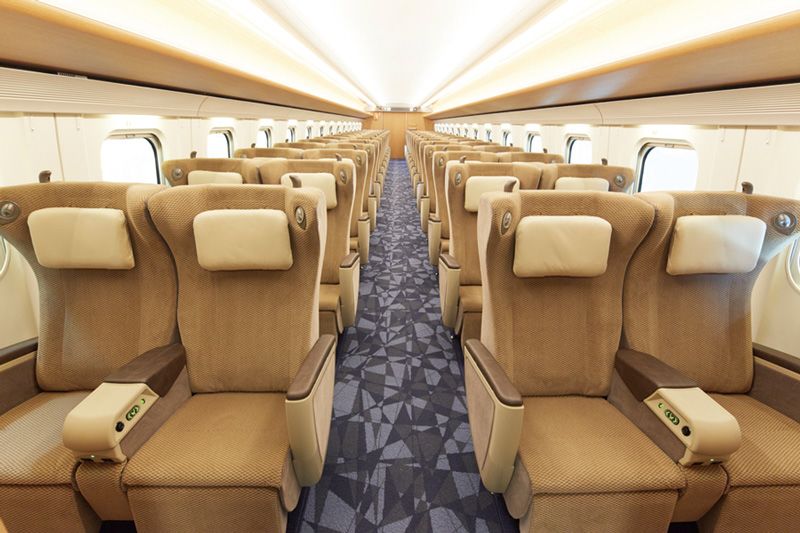 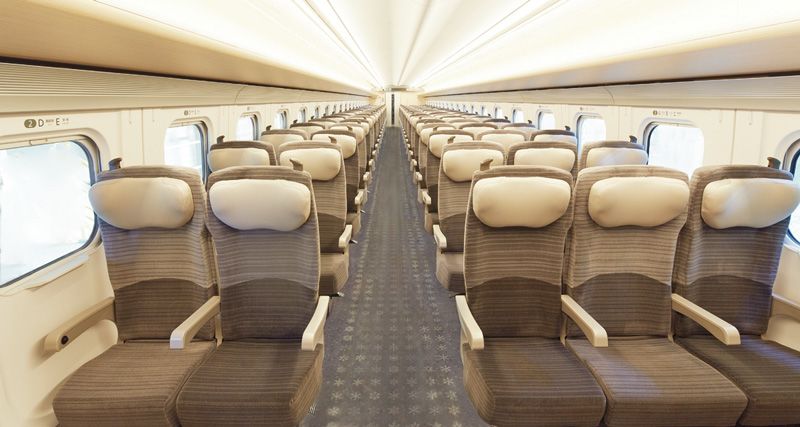 Standard Fares for Common Journeys to and from Shin-Hakodate-Hokuto

Travelers with a valid Japan Rail Pass may, depending on the type of ticket, make use of either standard class or the Green Car on any Hokkaidō Shinkansen service for no additional fee. In order to enjoy Gran Class, however, additional fees are required. For a journey between Tokyo and Shin-Hakodate-Hokuto, for example, passengers must pay a limited express fee and Gran Class seat fee totaling ¥26,720.

With the opening of the Hokkaidō Shinkansen, all other passenger railways connecting Honshū and Hokkaidō islands will be retired and the only means of crossing the Tsugaru Strait by rail will be on the Shinkansen. Rail Pass travelers should also note that control of part of the local line that follows the same route in Hokkaidō (between Kikonai and Goryōkaku) will switch from JR to another rail company. The Japan Rail Pass will no longer be valid in this section, and travelers will be charged a fare.

With a population of about 270,000, the city of Hakodate is a tourist hub that attracts close to 5 million visitors yearly. In 1859 the Port of Hakodate became one of Japan’s first ports of foreign trade, along with Yokohama and Nagasaki, leading to the exotic atmosphere that the city’s streets retain today. The nightscape from the top of the 334-meter Mt. Hakodate is reputed to be among the best night views in Japan.

Thanks to bountiful fishing grounds nearby, visitors can enjoy a variety of seafood throughout the year at Hakodate Morning Market, the food stalls on Daimon Street, and other places. The city takes special pride in its squid and kelp. Hakodate is also known for its red-brick warehouses in the bay area, the Goryōkaku (Japan’s first Western-style fort), and Yunokawa Hot Spring. 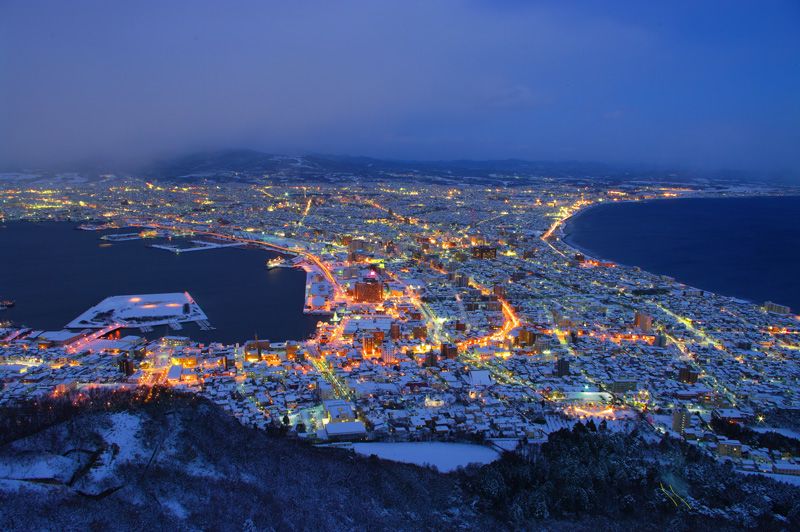 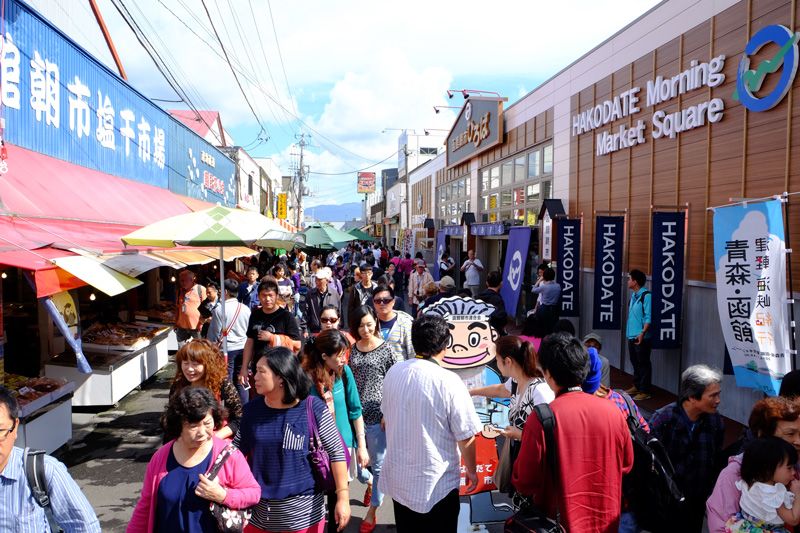 Ōnuma Park is a nature resort focused around three lakes, including lakes Ōnuma and Konuma. Tourists can enjoy strolls, bird watching, canoeing, and cycling, among other activities, while taking in the view of Mt. Komagatake. The park is served by JR Ōnuma Kōen Station, and buses are also available from Shin-Hakodate-Hokuto Station. 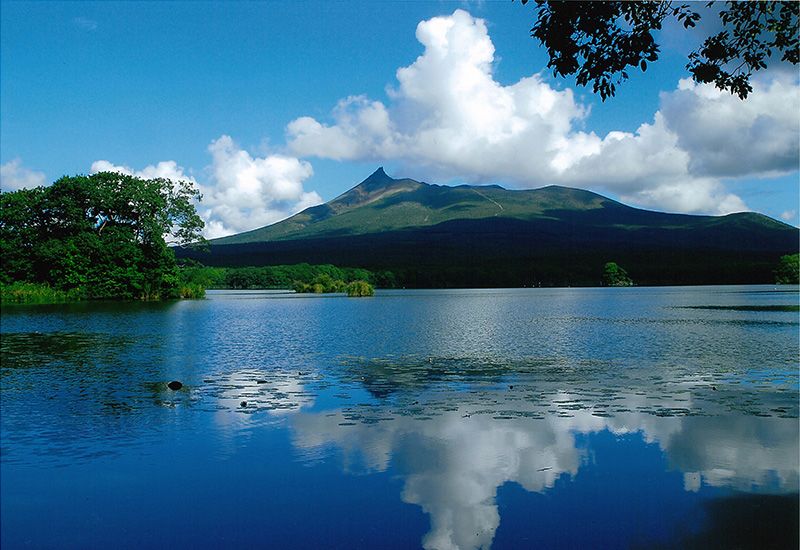 Esashi is a port town that once thrived as the northern end of the Kitamaebune trade route and a center of herring fishery. Hokkaidō’s only commercial port until the end of the Edo period (1603–1868), it retains traces of this history in the form of merchant houses, storehouses, and other historic architecture built between the Edo period and Taishō era (1912–1926). Another highlight is the Kaiyōmaru Youth Center, where a full-size replica of the Kaiyōmaru, a battleship of the late Edo period that sank off the coast of Esashi, greets visitors and artifacts salvaged from the shipwreck are on exhibit. The town has roughly 10,000 residents today. To get to Esashi, take a bus from Kikonai Station (1 hour 20 minutes) or Hakodate Station (2 hours). 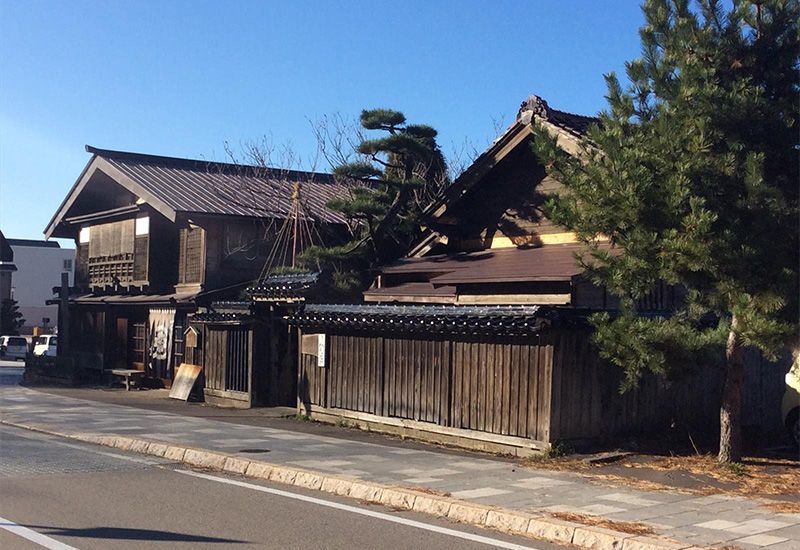 As the capital of the Matsumae domain, Matsumae was the only castle town in Hokkaidō and the regional hub of politics, economy, and culture during the Edo period. Main attractions include Matsumae Castle and the Matsumae Feudal Domain Residence. The city is also renowned nationwide for its wealth of cherry trees, which blossom between the end of April and mid-May. About 1 hour 30 minutes from Kikonai Station by bus. 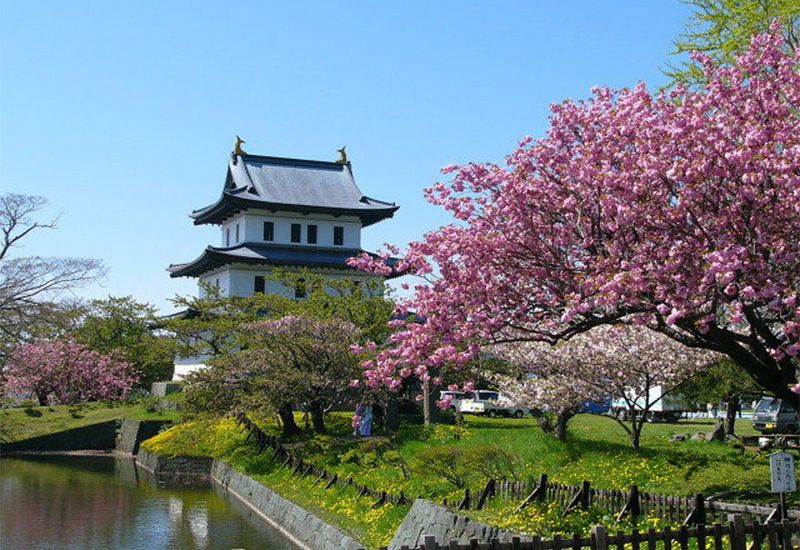 Tappizaki, or Cape Tappi, is the northern tip of Tsugaru Peninsula. Visitors are welcomed by a panoramic view of the Tsugaru Strait and Hokkaidō, as well as strong winds that blow in from the sea throughout the day. Tappizaki Lighthouse and the Seikan Tunnel Museum are among the places worth visiting. 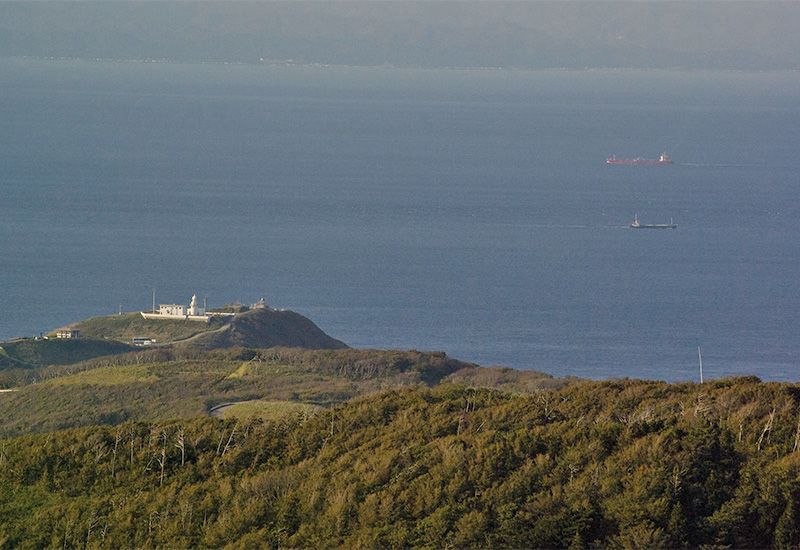 A shuttle bus makes four round trips a day between Oku-Tsugaru-Imabetsu Station and Tsugaru-Nakasato Station, the northern terminus of the Tsugaru Railway; the 70-minute ride costs ¥1,200 for adults. Famous for its wintertime “stove trains,” the Tsugaru Railway takes travelers to various destinations in the Tsugaru Peninsula, including Kanagi and Goshogawara.

(about 15 minutes from Tsugaru-Nakasato Station) is the hometown of the author Dazai Osamu, whose stately house of birth is now a tourist attraction known as Shayōkan. The town is also the birthplace of the Tsugaru samisen (Tsugaru jamisen), known for the distinctive playing style of forcefully striking the bachi (large plectrum) against the strings. Tourists can experience the music live at Tsugaru-jamisen Hall. 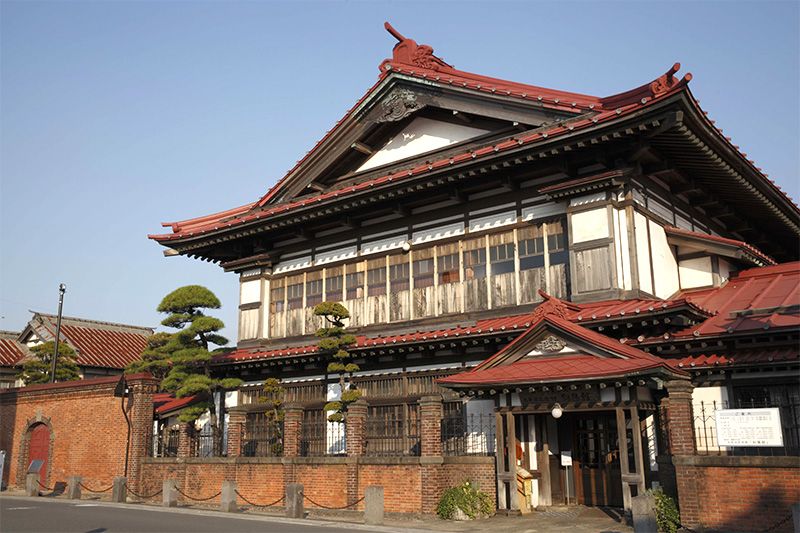 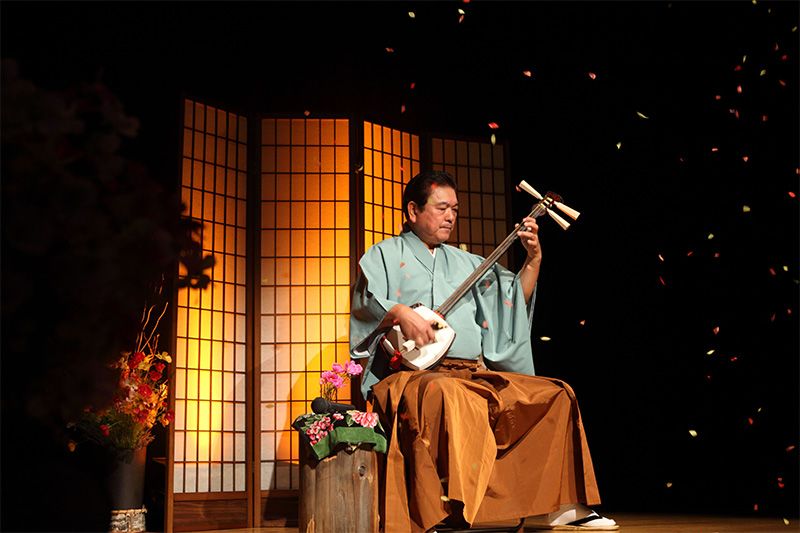 (about 40 minutes from Tsugaru-Nakasato Station) is home to the Tachineputa Festival, which features parade floats as tall as 22 meters—equivalent to about 7 stories. The giant tachineputa, or papier-mâché floats usually in the shape of a warrior or other human figure, are illuminated from the inside. The annual festival is from August 4 to 8, but the Tachineputa Museum exhibits tachineputa year round. 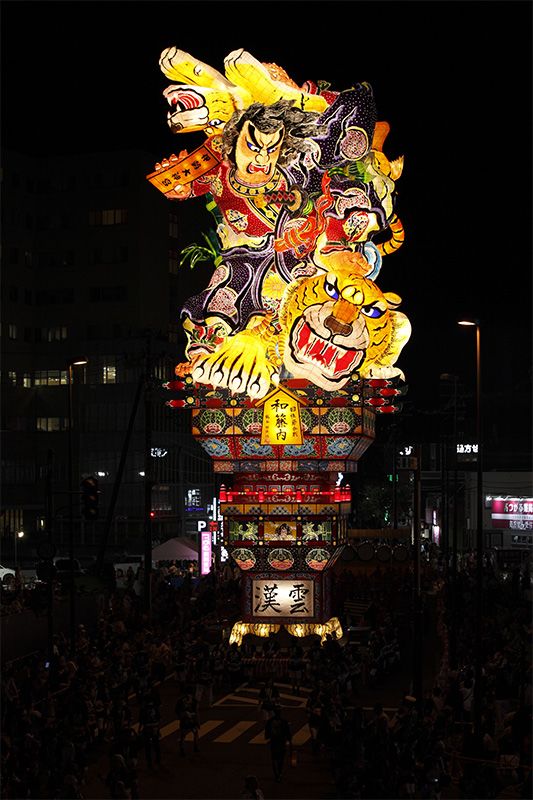