Society Culture Aug 29, 2015
Pachinko is big business in Japan, with thousands of halls and parlors nationwide. The pinball variant exploits a legal loophole to offer players the thrill of gambling for money, but competition from other forms of entertainment is chipping away at its long-term popularity.

Pachinko, a game similar to pinball, is Japan’s favorite form of gambling. It is usually played in noisy pachinko halls: parlors filled with lines of machines and lit up outside with multicolored neon signs. As of 2013, there were around 12,000 of these venues with more than 3 million machines near stations, in busy shopping streets, and by the side of major roads around the country. Total annual sales were ¥18.8 trillion, according to the 2014 White Paper on Leisure, making pachinko an industry that even outstrips the ¥12.7 trillion annual turnover for supermarkets.

Players sit in front of machines and turn a dial to successively release steel pachinko balls, which tumble downward through a mass of pins, levers, and spinners. If they fall in a winning pocket along the way, the player is rewarded with up to 15 extra balls to keep on playing. 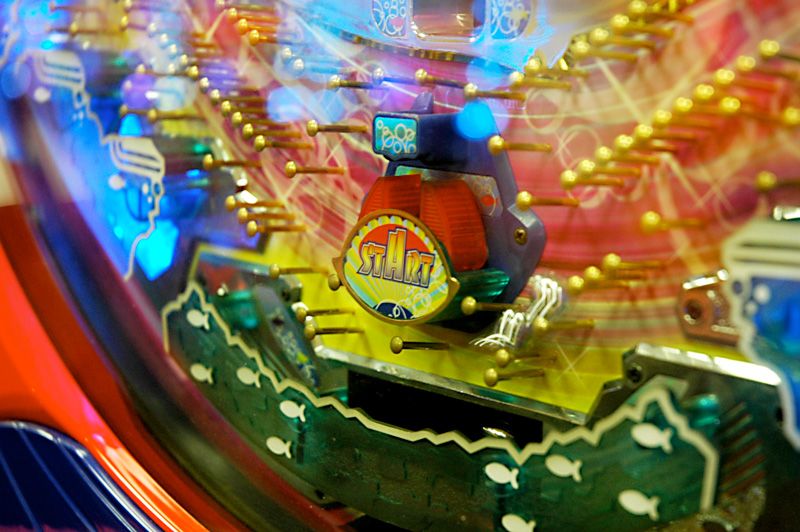 On the digital pachinko machines that are now standard, there is a special winning pocket that can provide big payoffs. Landing balls in this pocket lights up numbers on the screen like a slot machine. If they match, players can win more than 1,000 balls at a time, or even as many as 10,000 or 20,000 for successive jackpots.

Many recent machines are based on popular culture themes, such as the anime series Neon Genesis Evangelion and other famous animation characters and television dramas.

After playing, customers take the remaining balls and exchange them for prizes. These are commonly cigarettes or snacks, but might also be anything from neckties, handkerchiefs, and socks to electrical goods, cosmetics, accessories, CDs, and DVDs, depending on the venue. In large pachinko halls, the prize exchange area is like a convenience store or small supermarket. 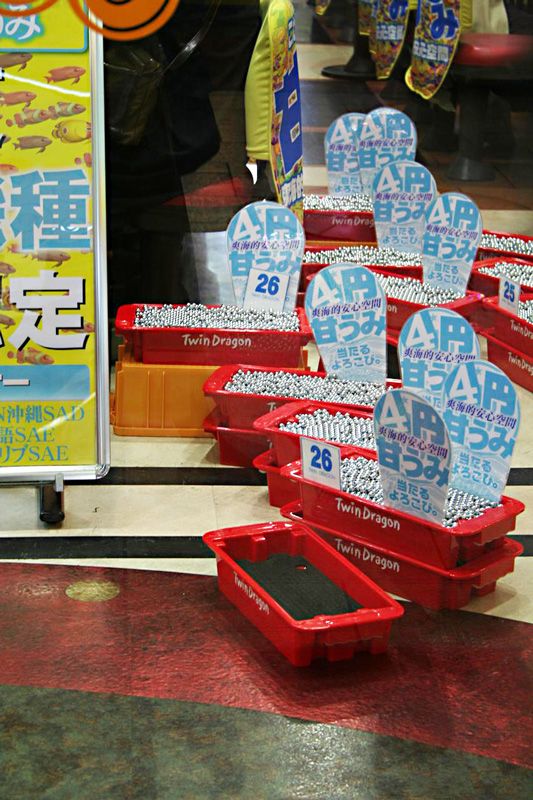 However, most pachinko fans are playing for money. They receive “special prize” tokens from the pachinko hall, which they can then exchange for cash at a dedicated window near the establishment. While it is not among the few kinds of gambling clearly permitted under Japanese law, pachinko exists in a legal gray area, and the practice is tacitly accepted by the authorities.

There is a strong element of chance in today’s machines, so it is possible to lose large sums of money at one time. The typical price per pachinko ball is ¥4, rising to ¥4.32 after tax, but recently more and more venues are offering balls for between ¥0.5 and ¥2, so customers can enjoy playing for longer. Even so, it can still be difficult to moderate spending, especially for players with limited disposable income.

Although the game is still big business, pachinko’s current annual sales represent a major decline from 1995, when they hit ¥30.9 trillion. The over-familiarity of the games and alleged tampering with machines, as well as competition from new forms of electronic entertainment, have drained interest in the pursuit. Young people are less attracted to gambling in general, and the industry’s focus on building machines with appeal to pachinko regulars has had the drawback of driving away casual players. With the number of devotees declining, pachinko stands at a major turning point.

How to play pachinko