Society Culture Apr 11, 2015
For many young Japanese, university entrance examinations are the first big challenge of their lives. Every year, hundreds of thousands of students do their best to get the scores they need to be accepted by their chosen universities.

Entrance Exams for Universities and More

Japanese universities hold annual entrance examinations to decide which students will be attending their classes from the start of the academic year in April. Japanese society places a high value on academic background, making an impressive educational record helpful in getting ahead. Particularly since the boom years of the 1960s and 1970s, attending a prestigious university is seen as a way of improving one’s chances of winning a job at a top company and gaining the respect of others. However, the country’s low birthrate has led to a smaller population of young people, meaning that entrance examinations are not as tough as they once were, while other options, like study abroad, are further transforming the education landscape.

Entrance examinations for universities receive the most attention, but for those who wish to win a place at one of the top schools, like the University of Tokyo or Kyoto University, it is better to attend a high school (grades 10–12, roughly ages 15–18) known for preparing students successfully for these tests. This means passing a competitive high school entrance examination. And at the compulsory education stage covering the first nine grades, some students may take examinations to enter private junior high schools (grades 7–9) rather than receive public education free of charge.

There are even entrance examinations for some famous private schools that cover the full nine years of compulsory education, nearly guaranteeing a smooth transition to suitable high schools and universities. The fact that this means putting five-year-olds through an exam is no obstacle to some parents who are intent on securing a good education for their children. 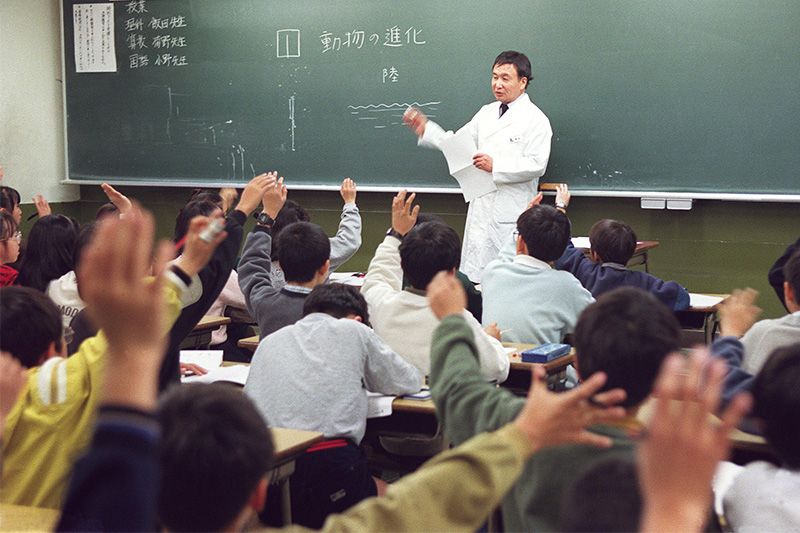 After school many students go to cram school for further study. (© Jiji)

Half a Million Students at Once: The Center Test

Students taking standard entrance examinations for private universities choose which topics they wish to be tested on. It’s common for students to either focus on math and science or on Japanese and social studies, depending on which major they are aiming for. There are also English tests.

Meanwhile, those students who want to enroll at national and public universities have to take the National Center Test for University Admissions in addition to a university-specific exam. The comprehensive Center Test covers all subjects, including both science and the liberal arts. In March 2015, there was an ¥18,000 fee for taking tests in three or more subjects. 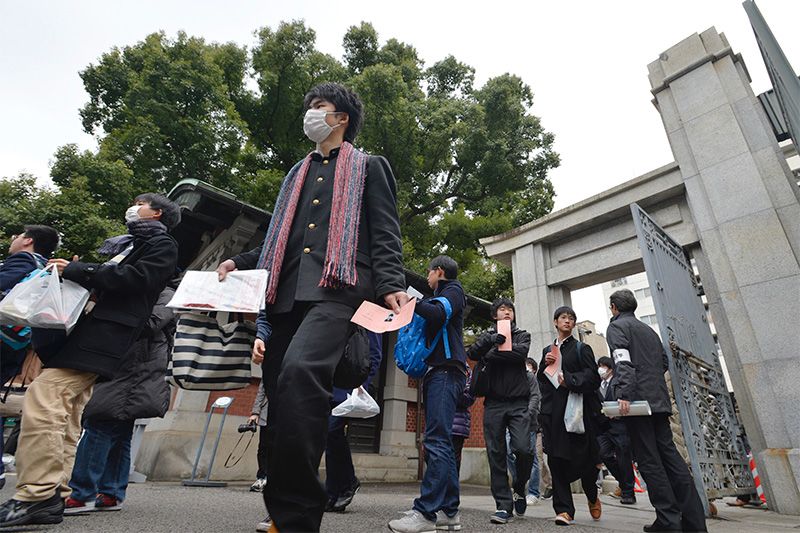 The entrance examination situation is changing due to Japan’s low birthrate, which is causing some universities to struggle to fill their available places due to a falling number of candidates. As a result, it has become easier to get into less popular institutions. The Central Council for Education, which advises the Ministry of Education, is pushing forward with reform of the university selection process, as well as changes in high school and university education as a whole.

Study abroad is another option. OECD statistics for 2011 show that 57,501 Japanese students were attending educational institutions overseas. There are also many international students in Japan. According to the Ministry of Education, in May 2013 Japan was hosting 168,145 students from other countries, including those in intensive Japanese-language study programs, a 3.9% increase from the previous year.

Given the importance of the tests, many students attend “cram schools” for extra study in addition to doing their usual schoolwork. With classes beginning in the afternoon after school lets out and continuing late into the evening, these schools provide additional instruction to give learners an edge in the exams they face.

It is also common for students who fail to win a place at their chosen universities to spend another year studying so they can try again. They are called rōnin, the name once given to samurai without masters. First-year rōnin are called ichirō, a name that becomes nirō if they are in their second year with no university acceptance in hand. There are even some students who go into their third and fourth year of repeated efforts, especially when taking difficult exams like those for medical faculties at famous universities.

Although entrance examinations are not as tough as they once were, competition is still extremely fierce for young people hoping to win an education at one of the nation’s top universities.

Interested in studying in Japan? Check out the Student Guide to Japan, published by the Japan Student Services Organization in English and many other languages.