Society Culture Jul 5, 2015
Japan has taken on a variety of different religious practices, such as Christian-styled weddings and native Shintō rituals. But sōshiki, or funerals, are generally Buddhist affairs carried out by priests at homes or temples.

Japanese society accommodates a wide variety of faiths. When a loved one passes, however, the majority of Japanese choose to hold a Buddhist funeral. According to a survey by the Japan Consumers’ Association, 90.1% of Japanese funerals are Buddhist, 3.4% Shintō, and 2.4% nonreligious.

While Buddhism is important to many, it is often only at the end of life and special anniversaries (hōyō) marking the passing of a loved one that people turn to their parish temple to ask a priest to chant prayers and conduct rites for the departed. This style of religious observance is facetiously referred to by some as “funeral Buddhism.”

Services are normally held at a temple, the deceased’s home, or a funeral hall.

Although Buddhist funeral rites vary by denomination and region, in general the body after death is washed and laid out with the head toward the north. A priest then recites kyō (sutras) next to the deceased before the body, or hotokesama, is placed in a wooden hitsugi (coffin). A wake (tsuya) is held for friends and family of the deceased to gather, share stories, and pay their respects.

The funeral is held the day after the wake. Following the service the body is cremated, after which family members use special chopsticks to place pieces of bones in a small urn (kotsutsubo). A 2013 report by the Ministry of Health, Labor, and Welfare showed that 99% of Japanese burials involve cremation.

Depending on their relation to the deceased, friends and family may choose to attend either the wake or the funeral service. Typical mourning attire (mofuku) is a black dress for women and a black suit and tie for men. Those attending also commonly carry a Buddhist rosary known as a juzu. Dress at a wake is less formal.

Mourners customarily provide a monetary gift called kōden, or “incense money,” in lieu of flowers and other offerings. Kōden varies according to age of the mourner and relationship to the deceased, but is generally from ¥5,000 to ¥10,000. The money is placed in a special envelope called a kōdenbukuro and offered when arriving at the service.

An essential custom at a Buddhist funeral is the burning of incense, or shōkō. Mourners first take a pinch of powdered incense (makkō) using the thumb, index finger, and middle finger of their right hand, lifting it with their palm facing inward to forehead height. They then sprinkle the incense in a burner (kōro), holding their fingers just above the vessel. Depending on the Buddhist sect this may be done only once or repeated three times. 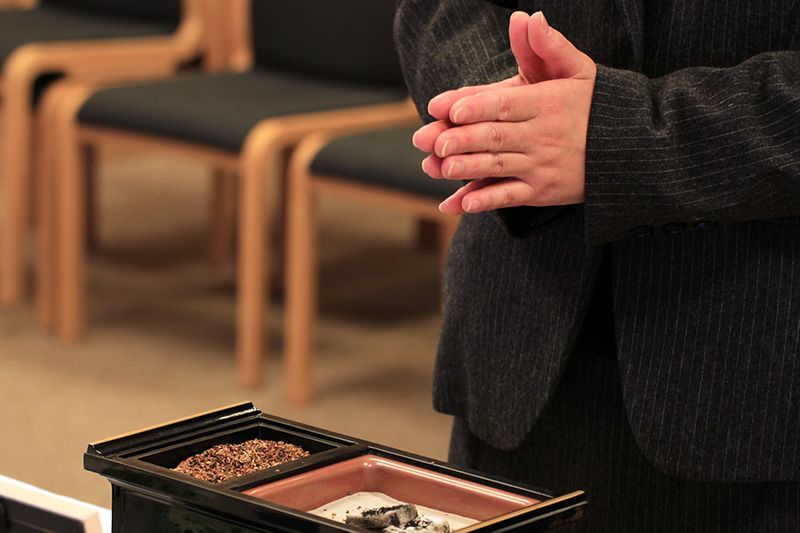 A mourner at an incense burner.

As the population of Japan continues to age and society shifts toward nuclear families with fewer children, the growing trend for funerals is away from traditional services toward smaller, inexpensive ones. Increasingly, people are choosing intimate services that reflect their personal thoughts and beliefs.

One factor affecting this is expense. According to 2010 JCA figures, the average price of a Japanese funeral is ¥2 million. Natural burial, where a person’s cremated remains are spread at sea or in the mountains, musical services with live musical performances, and placing remains at the base of a tree or shrub—so-called “tree-burial”—have all become popular choices for families as well as people planning their own services.

Even as Japanese society grays, however, death is becoming less of an aspect of everyday life as more elderly live in retirement facilities and fewer people pass surrounded by family and friends. Correspondingly, the funeral industry in Japan continues to transform as views of life and death steadily change, with a growing number of funeral providers offering a range of services from elaborate rites to low-cost package deals.

(Banner photo: A a Buddhist altar, or saidan.)