“Rakugo” (The Art of Storytelling)

Society Culture Aug 1, 2015
“Rakugo” storytelling dates back to the Edo period (1603–1868) and remains popular today. The often comic monologues rely on the skill of the teller, rather than scenery or complex props.

Rakugo, the traditional Japanese art of storytelling, developed as a form of entertainment for ordinary citizens during the Edo Period (1603–1868). At first, many different kinds of entertainers would perform the generally humorous monologues, but gradually specialists emerged. These are now known as rakugoka.

Dressed in a kimono, the storyteller remains seated throughout the performance, playing the parts of several characters and acting out different scenes with only a fan and a hand towel as props. Unable to fall back on costumes and scenery, it is the job of the rakugoka to inspire the imagination of the audience through the skill employed in portraying the world of the story. The punch line is known as the ochi (literally, the “drop”) and a good delivery is essential to a successful performance. An alternative pronunciation of ochi is raku, the source of the art’s name.

There are still some traditional vaudeville theaters, or yose, that host live rakugo performances almost every day. Famous Tokyo venues include Shinjuku Suehirotei, where tickets for adults cost around ¥3,000, Suzumoto Engeijō in Ueno, Asakusa Engei Hall, and Ikebukuro Engeijō, while in Osaka, there is Tenma Tenjin Hanjōtei. 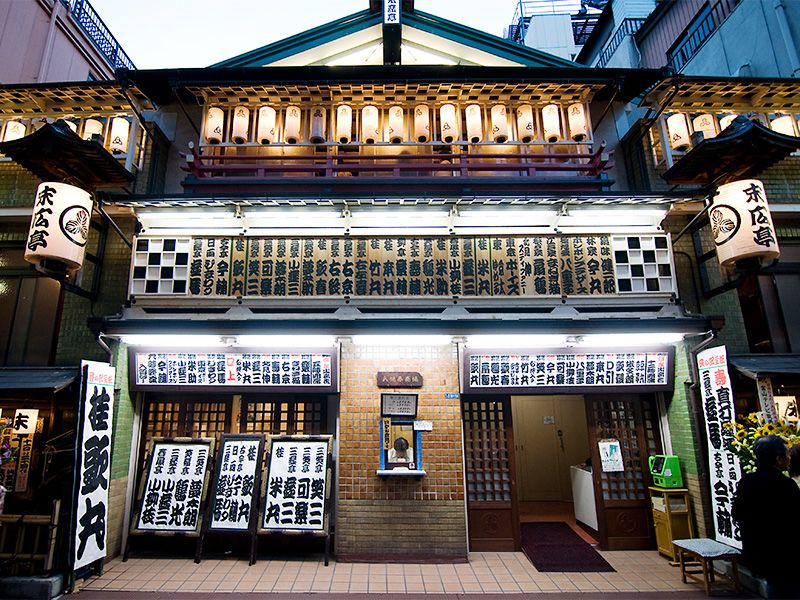 The Shinjuku Suehirotei theater, decorated with the names of performers.

The material, or neta, for the performances is generally based on farcical comedy or warmhearted human drama, incorporating typical characters from Edo (the former name for Tokyo) or Osaka. There are still storytellers today who specialize in the classic rakugo anecdotes first told in the Edo period, which have been passed down from master to disciple through the years. Well-known classic tales rely on the individual delivery of the tellers, but newer works, from the twentieth century onward, are often told only by the person who wrote them, so that their unique qualities lie in the material itself. Many are satirical takes on society. Many of the new works are well-regarded in the rakugo world for their ambition.

Rakugo remains popular as one of Japan’s representative classical arts. A recent survey found that 26.4% of Japanese people had attended a rakugo performance, putting it ahead of other disciplines such as kabuki, nōgaku, and buyō (traditional dance). It is common for schools to invite rakugoka to perform for children studying traditional arts. Indeed, 62.1% of Japanese people in their twenties first experienced rakugo at school.(*1)

Recently, Japan has seen the rise of storytellers performing in English, including Katsura Kaishi. Also active on the scene is Diane Kichijitsu, an Osaka-based bilingual rakugoka who was born in Liverpool in Britain and fell in love with the art after coming to Japan in 1996. 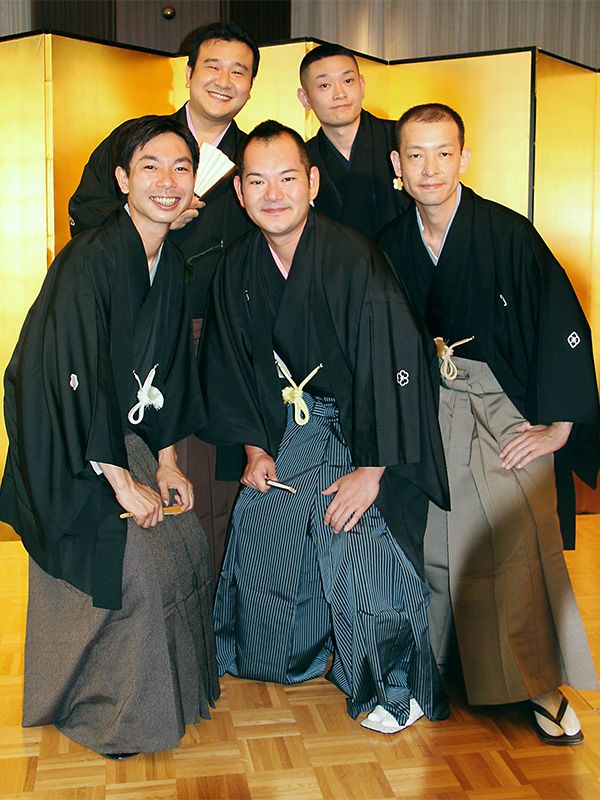 Rakugoka who have just been promoted to the shin’uchi rank. (© Jiji)

The oldest publication related to rakugo is Seisuishō, which dates back to 1623; its name means “laughter to banish sleep.” By around the turn of the eighteenth century, the first yose were charging audiences to watch rakugo performances in Edo, Osaka, and Kyoto.

As rakugo took hold in the three cities, they developed their own distinctive styles. Edo rakugo is still performed in Tokyo, while Osaka-style storytelling is known as Kamigata rakugo. The Kyoto school, however, has apparently died out.

There are three grades of rakugoka, with zenza the lowest, followed by futatsume and shin’uchi. Ranking is decided depending on which group performers belong to. Once they reach the level of shin’uchi, they can themselves take on and train disciples.

Rakugo also appears on television in the comedy variety program Shōten, which has been broadcast weekly on Sunday evenings since 1966. And there are rakugo-themed manga and anime too, like Shōwa Genroku Rakugo Shinjū.

(*1) ^  Data from this survey conducted by Hapiken, Asahi Group Holdings.