Culture Aug 10, 2017
An introduction to Japan’s iconic mountain that draws visitors from around the world for its main summer climbing season.

Mount Fuji is Japan’s tallest mountain, rising 3,776 meters above sea level. It is located near the country’s center, straddling Shizuoka and Yamanashi Prefectures. The peak’s towering presence tapers off into gently sloping foothills that extend into the surrounding area. Japanese poets and artists have long taken inspiration from Fuji’s beauty. Yet, as an active volcano it has also demonstrated its power through intermittent eruptions, making it the focus of awe and worship. The most recent major eruption in 1707 is said to have continued for two weeks.

Fujikō religious groups dedicated to the worship of Mount Fuji flourished in the Edo period (1603–1868). They promoted the benefits of pilgrimages to its summit. As not all adherents were able to complete such a journey, however, they built small replicas of the mountain called fujizuka around the country as more accessible surrogates. Many of these still remain today.

In June 2013, Mount Fuji was registered as a UNESCO World Heritage site for its status as a “sacred place and source of artistic inspiration.” The official description on the UNESCO website describes it as “an internationally recognized icon of Japan.”

Four Trails to the Top

The official climbing season generally runs from July 1 to August 31. Dates vary depending on routes, though, so it is important to check beforehand. Some 300,000 people head for the summit during the brief two-month window. The ascent takes 6–9 hours, while the return trip requires 4–5 hours. There are four different trails climbers can use, and it is possible to get as far as the fifth station of each by car or bus.

As Mount Fuji is more than 3 kilometers tall, the temperature at the summit may dip below freezing even in summer. There are also frequently strong winds, so climbers should plan thoroughly and ensure they are properly equipped.

The Yoshida Trail is the most popular route, with plentiful mountain huts and other facilities, but crowds can mean slow going. The next most popular is the Fujinomiya Trail, which is the most direct path to the summit. The Subashiri Trail is a favorite with regular visitors as it is less crowded and the surrounding scenery undergoes rich variation through the seasons. The Gotenba Trail is the longest of the four and is suitable for serious climbers.

Mountain huts offer only the most basic accommodation. Climbers catch a few hours’ sleep in their clothes while packed into shared rooms. It is not possible to charge phones and there is no water for washing. No smoking is allowed in the buildings.

Many climbers time their journey to arrive at the summit for the sunrise, which is known by the respectful epithet goraikō, or “the coming of the light.” 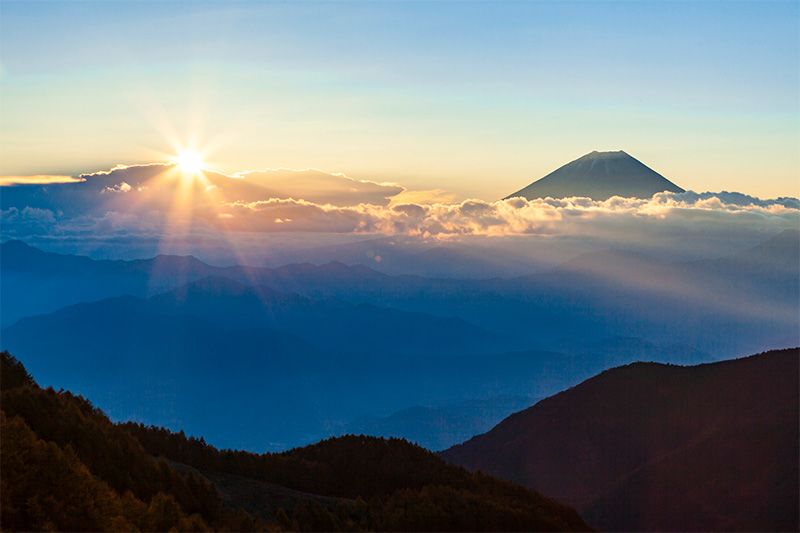 The large crater at Fuji’s summit is encircled by eight peaks. It takes around 90 minutes to hike around all of them. During this time, visitors can appreciate the spectacular scenery of the crater and the grand panorama of the surrounding mountains, lakes, and distant sea.

In the foothills are such natural attractions as the Aokigahara forest and Fuji Five Lakes. There are numerous hotels and leisure facilities near Lakes Kawaguchi and Yamanaka in particular.

Dispatching a letter from Japan’s highest post office, located at the summit of Mount Fuji, is one way for climbers to show that they made it to the top. They can buy postcards and get them stamped with a special seal before sending them off. There is also a weather station at the summit, which has been in place for more than 80 years. It is now unmanned and transmits weather data automatically.