Culture Jul 10, 2017
The Sacred Island of Okinoshima and Associated Sites in the Munakata Region has been registered by UNESCO as a World Heritage site. It is the twenty-first Japanese location to be added to the prestigious list.

An Island of Ancient Rituals

On July 9, 2017, the World Heritage Committee of UNESCO announced the official registration of the Sacred Island of Okinoshima and Associated Sites in the Munakata Region on its World Heritage list.

Okinoshima is located some 60 kilometers off the coast of Fukuoka Prefecture in the Genkai Sea. From the fourth to the ninth century AD, large-scale rituals were performed on the island to pray for successful trade and safe voyages for ships plying the seas among Japan, Korea, and China. Around 80,000 offerings have been uncovered on Okinoshima, including gold rings from the Korean peninsula and fragments of a cut-glass bowl believed to have originated in Persia. All have been designated as national treasures. The entire island is considered sacred as part of the Munakata Taisha shrine on the mainland.

There are numerous taboos associated with the island. Women are not allowed to set foot there at all, and there are restrictions on visits by men, including a requirement to perform ablutions in the sea before coming on land.

In December 1993, Japan’s first World Cultural Heritage sites were registered: the Buddhist Monuments in the Hōryūji Temple area (Nara Prefecture) and Himeji-jō Castle (Hyōgo). The sixteenth such site was registered in 2016, with the recognition of the National Museum of Western Art in Tokyo as part of The Architectural Work of Le Corbusier, an Outstanding Contribution to the Modern Movement. The country’s first two World Natural Heritage sites were also recognized in December 1993: Yakushima (Kagoshima) and Shirakami-Sanchi (Aomori and Akita). These were followed by Shiretoko (Hokkaidō) and the Ogasawara Islands (Tokyo), bringing the total number of sites to four.

As of June 2017, there are 1,052 World Heritage sites in the globe (814 World Cultural sites, 203 World Natural sites, and 35 mixed properties); a total of 193 countries have signed the “World Heritage Convention.” 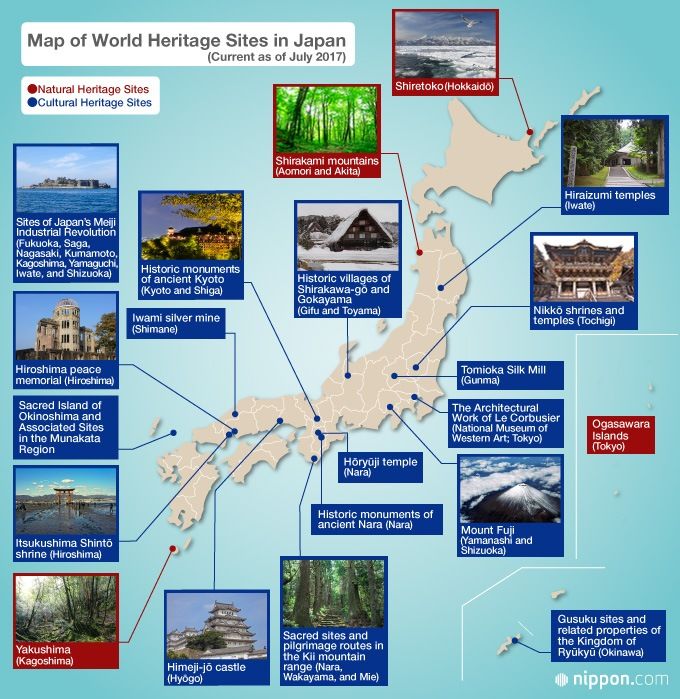 (Banner photo: Okinoshima, which was registered as a UNESCO World Heritage site on July 9, 2017. © Jiji, courtesy of Fukuoka Prefecture.)