Culture Dec 24, 2018
Japan boasts many styles of pottery and porcelain stretching back to ancient times. The characteristics and history of the different ceramic traditions are closely connected to people’s lifestyles, creating a story unique to each region.

Japanese ceramics have a long history, going back as far as 13,000 years ago to the earthenware of the prehistoric Jōmon period. The name Jōmon itself, meaning “rope-patterned,” refers to the design of the pots dating from this era. Jōmon earthenware has recently enjoyed renewed interest due to its unique shapes, spirituality, and strong sense of presence. 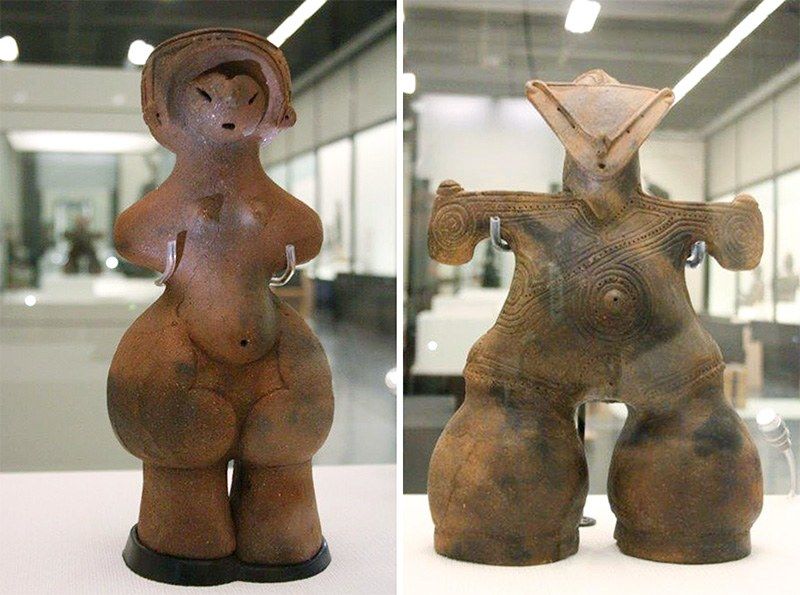 Jōmon period dogū figurines known as the Venus of Jōmon (left) and the Masked Goddess. The earthenware objects were excavated in Nagano Prefecture. (© Jiji ).

Ceramics are made from raw materials like clay and pottery stone, which contain components with glasslike qualities. Clay is used to create various shapes that are then fired. Ceramics can be broadly divided into two categories: pottery and porcelain. Pottery is made from clay fired to a temperature lower than porcelain. It generally is thicker and has a warmer look than porcelain. Porcelain clay, meanwhile, is fine-grained and contains quartz and feldspar, giving glasslike qualities. After firing, porcelain is extremely hard and can be made much thinner than pottery. Pottery and porcelain each have their own unique styles, with decorations including brushwork, various kinds of glazes, brushed slip designs, combed patterns, and chattering.

Ceramic production in Japan flourished particularly from the late Heian period (794–1185) to the Muromachi period (1336–1568). Although kilns were established in regions throughout Japan, there were six pottery-producing areas that flourished. They are Bizen (Okayama Prefecture), Tamba (Hyōgo Prefecture), Shigaraki (Saga Prefecture), Tokoname and Seto (both in Aichi Prefecture), and Echizen (Fukui Prefecture). Collectively they are known as the Six Ancient Kilns, and in 2017 they were designated as Japan Heritage sites.

An unglazed Bizen sake bottle (left) with a natural ash glaze effect and markings from the wood firing. A narrow road beside a Seto pottery with kiln props embedded in the wall. (© Pixta) 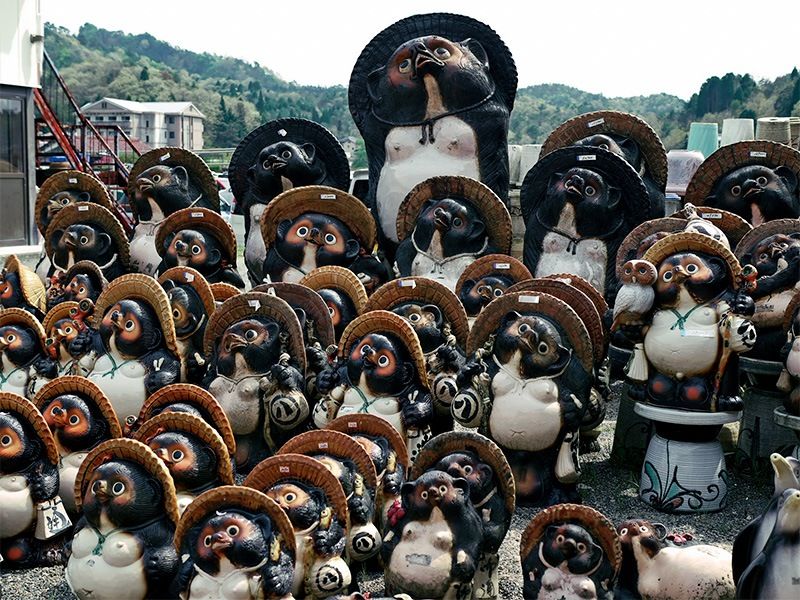 Pottery and the Tea Ceremony

The tea ceremony, perfected by tea master Sen no Rikyū late in the Muromachi period, uses pottery unique to Japan. This includes specialized utensils, flower vases, and rustic bowls such as Raku ware and Oribe ware. The warlord Toyotomi Hideyoshi, an avid practitioner of the tea ceremony, brought back Korean potters when he invaded the Korean Peninsula in the late sixteenth century. They set up kilns in Kyūshū and produced tea utensils.

Imari ware—a kind of porcelain once made in the town of Arita, Saga Prefecture, which is now famous for Arita ware—has high value as antiques, with collectors of the ware all over the world. Arita ware marked its 400th anniversary in 2016. One of the more famous kinds of Arita ware is Kakiemon, which features overglaze enamel decoration in harmony with the white porcelain.

From the late Azuchi-Momoyama period (1568–1603) to the early Edo period (1603–1868), potters exerted their technical skills in the pursuit of beauty. From that time onward, large quantities of porcelain with beautiful decorations have come into being. 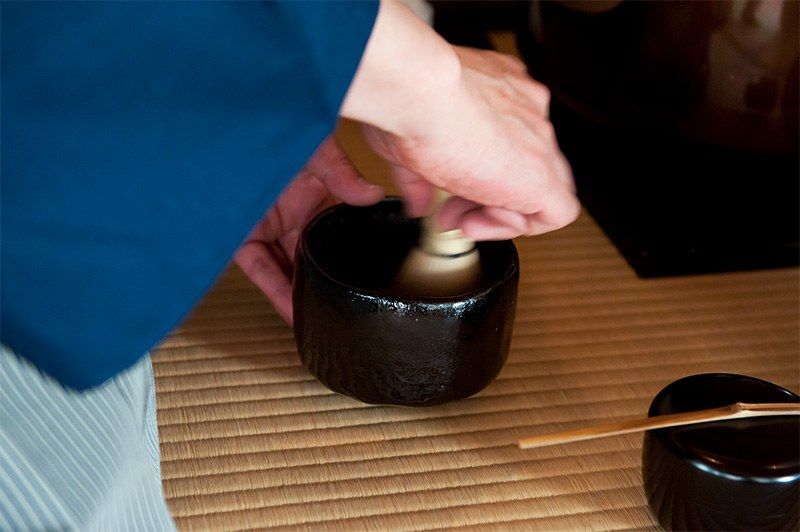 Tea is whisked in a bowl during the tea ceremony. (© Pixta) 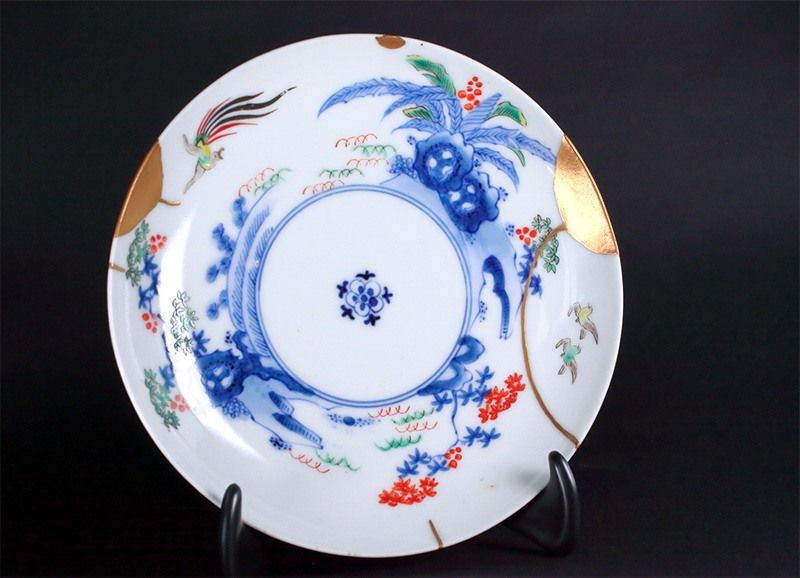 An Arita ware platter repaired with kintsugi, a technique where broken pottery is  repaired with lacquer mixed with gold powder. (© Pixta)

From the eighteenth century onward, the techniques of Arita ware spread to locations like Kyoto, Kutani, and Seto. From the early Meiji era (1868–1912), affluent devotees who were pivotal to the tea ceremony world, such as the businessman Nezu Kaichirō (whose collection would be the core of the Nezu Museum) and the silk trader Hara Sankei (designer of the Sankeien Garden), became patrons who supported the spread of Japanese culture.

In the modern era, Yanagi Sōetsu (1889–1961), Hamada Shōji (1887–1978), Kawai Kanjirō (1890–1966), and the Englishman Bernard Leach (1887–1978) advocated the Mingei movement, with its emphasis on functional beauty in everyday items made by anonymous craftspeople. This movement gradually gained momentum. 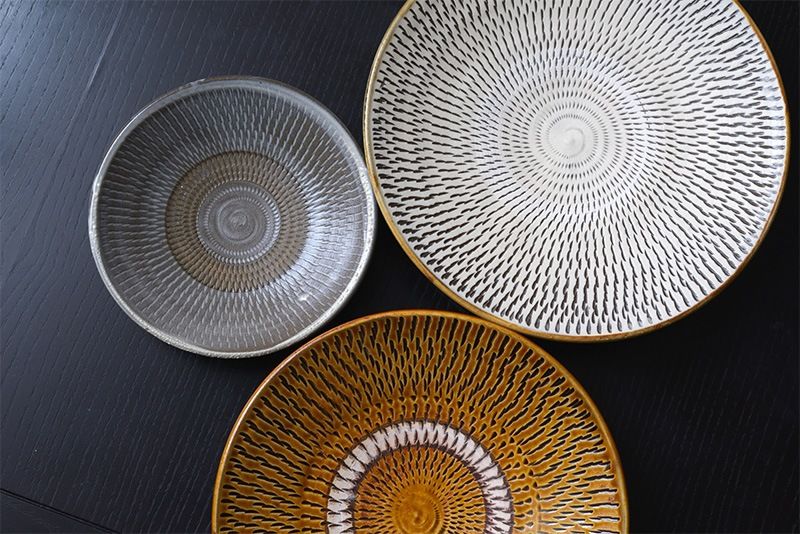 One pottery-producing area that garnered attention nationwide due to the Mingei movement is Onta in the city of Hita, Ōita Prefecture. For over 300 years, potters in Onta have handed down their secrets to only one of their sons. This has kept the number of kilns steady; to this day, only the original ten potteries remain active. In 1995, the Japanese government designated the creation of Onta ware an Intangible Cultural Property.

Recently, there has been growing diversification in people making pottery. Pots for use in everyday life are also popular with the younger generation.

Twice each year, in May and October, pottery fairs are held at pottery-producing areas around Japan. Visitors get the opportunity to find a good buy and also meet up with the potters themselves. The three major pottery fairs in Japan are for Mino ware (Gifu Prefecture), Imari or Arita ware, and Seto ware. Ceramic lovers plan trips to enjoy the style of pottery and history particular to that area, as well as local cuisine. 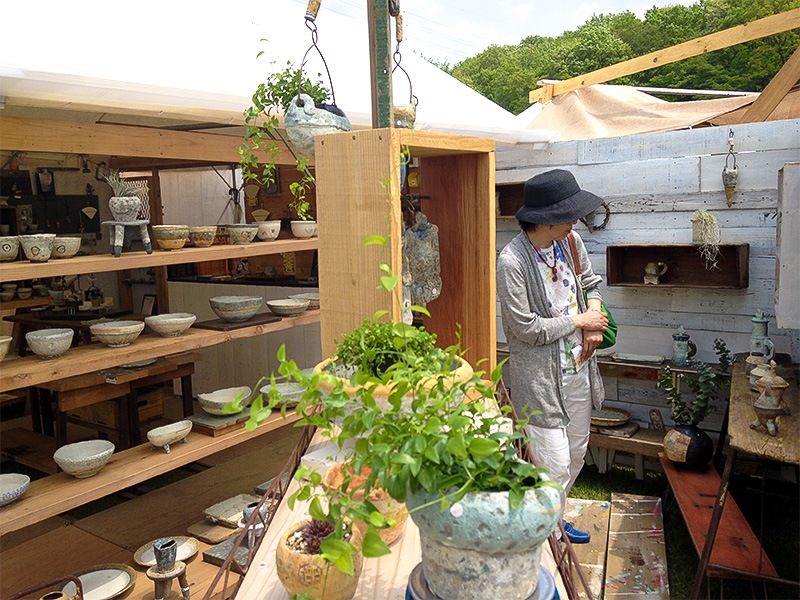 The Himatsuri pottery fair is held in Kasama, Ibaraki Prefecture, every spring and autumn. Potters set up stalls to sell their pots directly to customers.