Each year in early October the skies above the Muku Shrine in Chichibu, Saitama Prefecture, come to life with the fire, roars, and smoke of dragons. The appearance of these legendary creatures marks the climax of the Ryūsei Matsuri, a festival with roots stretching back over 400 years.

The dragons are primitive rockets known as ryūsei, fashioned by hand from such materials as pine, bamboo, and paper. While the missiles date back centuries, their origin is not clearly understood. A document from 1725 detailing the history of the Muku Shrine states that the rockets evolved from an ancient ritual involving tossing flaming torches into the air to secure the providence of local deities, while other sources describe the missiles as descendants of noroshi, projectiles thought to have been used to communicate among different mountain castles in the region during the sixteenth century.

While their genealogy is uncertain, records show that the rockets, which are written with the characters 龍 (dragon) and 勢 (force), were by modern times a well-established folk custom. The current festival dates from the early Meiji era (1868–1912), beginning when local parishioners fired off ryūsei to celebrate the completion of the long stone stairway leading to the Muku Shrine. Since that time, the festival has been held in early October, with the official date now established as the second Sunday of the month. 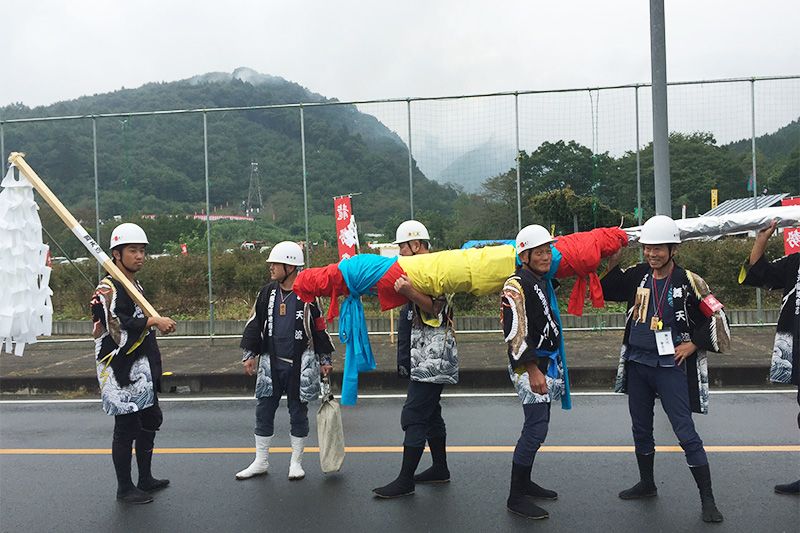 Members of the ryūha Maitenryū carry their rocket to the launch tower.

The Ryūsei Maturi features 30 rockets constructed by ryūha, “dragon teams” consisting of local residents including farmers and business owners. Utilizing traditional techniques, ryūha spend close to a month crafting the heart of their rocket, a roughly 60-centimeter long cylindrical engine. This kayakutsutsu, or “gunpowder tube,” is attached along with a payload of fireworks, smoke bombs, and parasols to an 18-meter bamboo pole, the yagara, which balances the projectile in its short flight.

On the day of the festival, the finished ryūsei are carefully carried in turn to the yagura, a 25-meter bamboo launching tower. In lieu of a countdown, each ryūha christens their rocket with drumming and a long invocation, or hōnō, sung into a loudspeaker by one or several members of the group. At the end of the supplication, the fuse is lit, sending the ryūsei hurtling hundreds of meters into the air, where, if all goes well, it bursts in a display of crackling and screeching fireworks, rainbow vapors, and drifting parachutes. 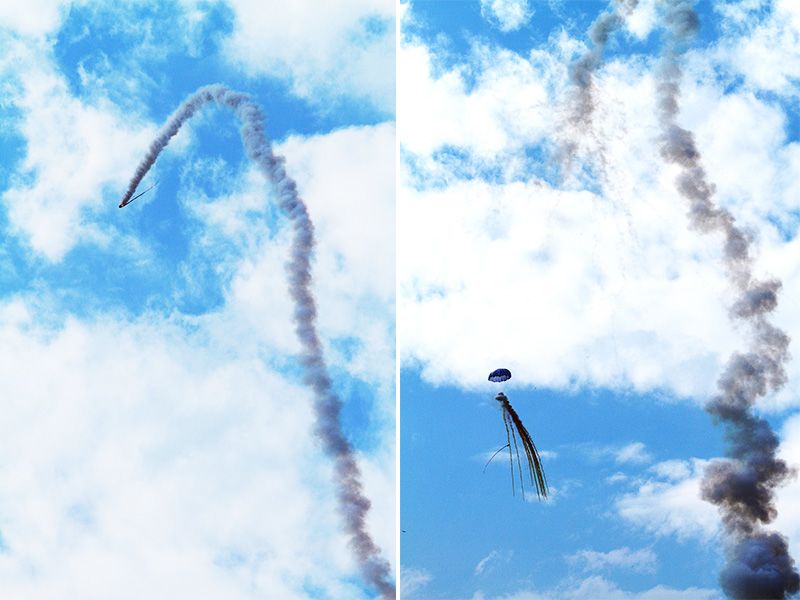 (Left) A ryūsei leaves a trail of white smoke as it hurtles into the sky. (Right) The ryūsei releases its parachute and fireworks payload.

A Rocket is Born 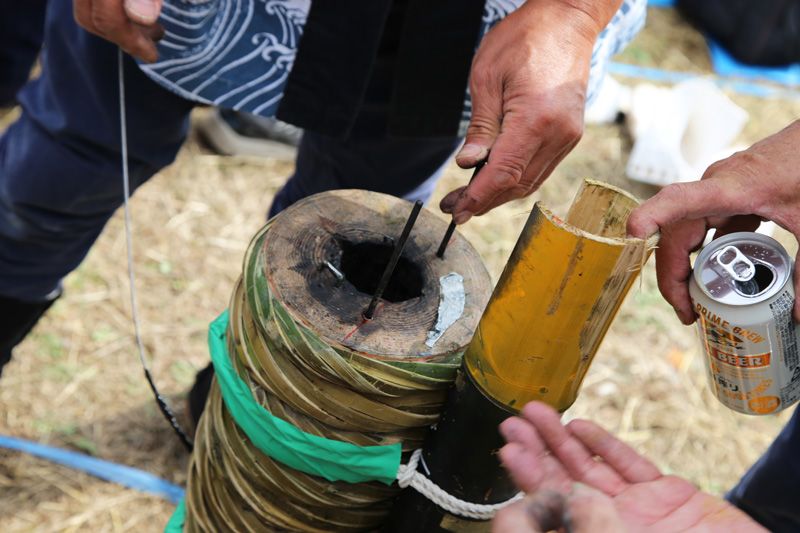 Ryūha members inspect the kayakutsutsu (engine) after a successful launch.

Crafting a ryūsei is a complex procedure requiring patience and skill. In the first step, ryūha select a suitable pine log and bamboo to form the kayakutsutsu―this process actually begins earlier with materials being carefully handpicked from the forest and allowed to age for two years after harvesting. The combustion chamber of the rocket is carved from the wood, which is cut to size and split it in half lengthwise. After forming the chamber, the team members rejoin the two halves and bind them with woven strips of bamboo, giving the engine a distinctive appearance.

Next, the fuel or kayaku is prepared following the long-established method of mixing sulfur, charcoal, and saltpeter, a demanding process that tests the knowledge and talents of even the most experienced ryūha member. Once formed, the black powder is carefully packed into the pine casing, a delicate procedure requiring special attention to removing air pockets while avoiding compressing the material too tightly. A special mixture of clay is then packed at the tip and around the nozzle, a 9-centimeter hole bored in the base of the engine. 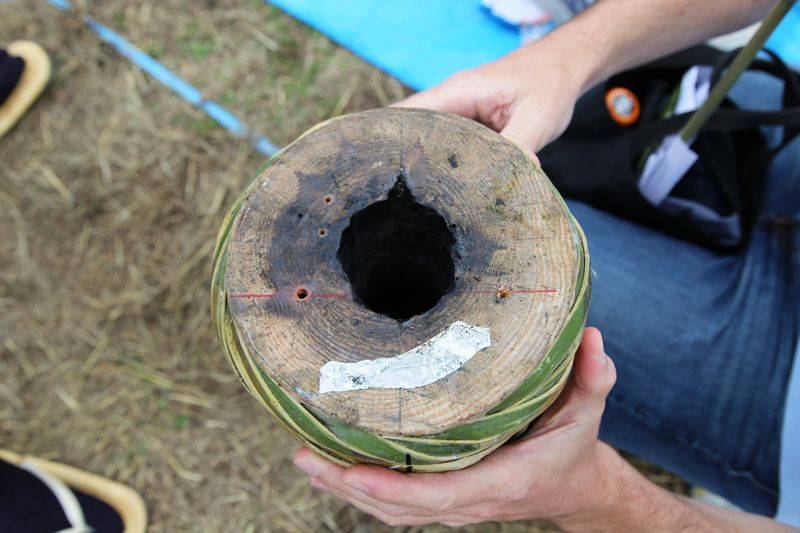 The final step involves assembling the ryūsei. The day before the festival, ryūha members carefully attach the engine and payload to the yagara along with fuses for the black powder and fireworks. When complete, the rocket represents the culmination of a broad communal effort. The main parachute and small gliders dispersed when the rocket reaches its apex are often made with assistance of local schoolchildren and other members of the community.

Countless issues may arise to squelch the fortunes of a rocket, with success hovering around 70%–80%. Poorly packed fuel may strand a ryūsei on the launch tower, a fate known as izukumari, or insufficient thrust may doom it to arch feebly into the hillside in what is called nabetsuru. A weak casing may result in the rocket exploding on the tower, an embarrassing outcome called tsutsuppane, or a payload may get entangled, causing the ryūsei to plummet feebly back to earth. Ryūha members are quick to point out that success one year does not carry over to the next. Even the most experienced groups can suffer an embarrassing fate by taking too many risks or cutting corners. 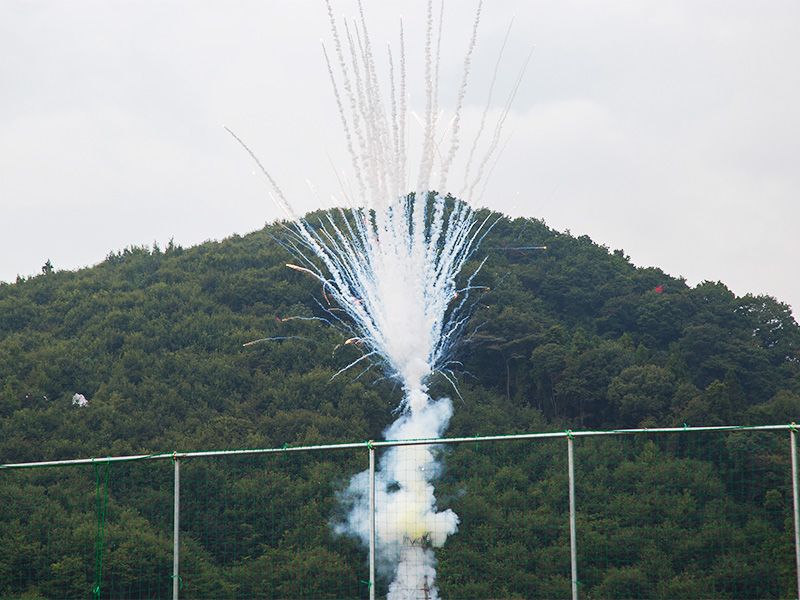 A failed ryūsei suffers explodes on the launch tower.

Trial and error is an essential aspect of learning to construct ryūsei. Younger ryūha members learn from veterans, and both failed and successful rockets are intricately studied for hints. Amid efforts to preserve the tradition, it has also become common for groups to openly share techniques that were once closely guarded secrets.

The Ryūsei Matsuri has enjoyed a boost in popularity among younger Japanese, having been featured in the 2011 anime series Ano hi mita hana no namae o bokutachi wa mada shiranai (Anohana: The Flower We Saw That Day). It also enjoys special status as a prefectural intangible cultural heritage. The Yoshida Ryūsei Preservation Society (site in Japanese) has the goal of ensuring dragons will return to roam the skies each year. 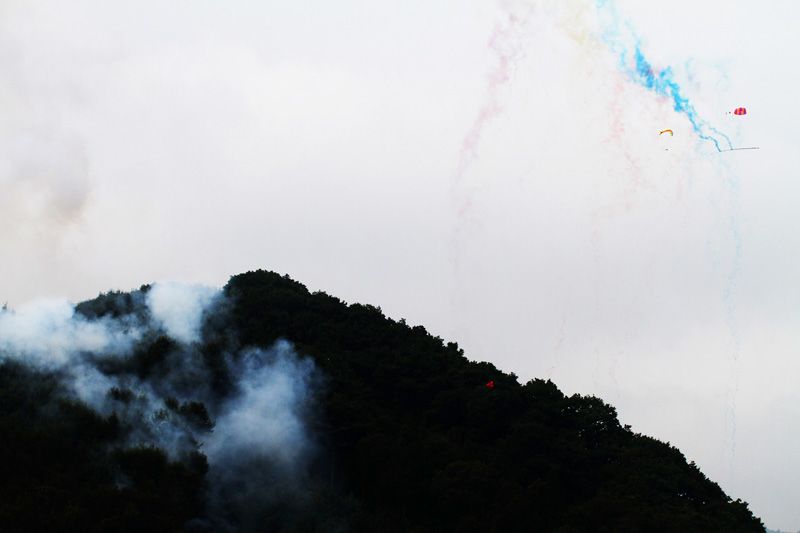 A successful ryūsei drifts slowly through the air.