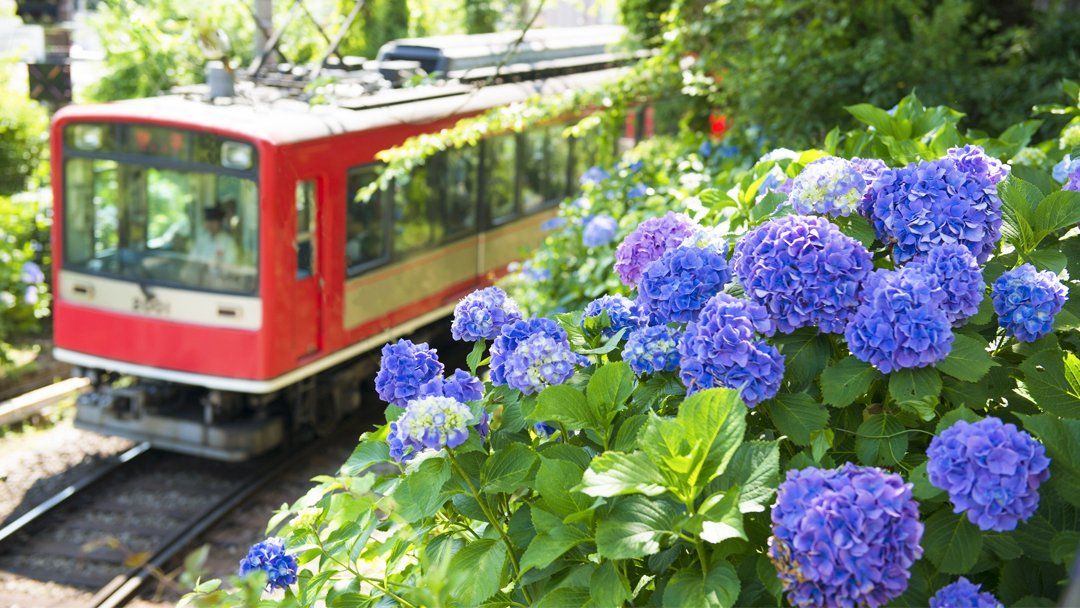 May 18, 2018
During Japan’s rainy season, thousands of hydrangea along the narrow track of the Hakone Tozan Railway come into bloom. Surrounded by the robust blossoms, carriages transform into “hydrangea trains,” adding to the pleasure of passengers on the scenic, winding mountain line.

As spring fades and summer approaches, richly colored hydrangea flowers come into bloom, heralding the onset of tsuyu, Japan’s rainy season. Cultivated throughout the country—and the world for that matter—the plants are admired for their large clusters of eye-catching blossoms that provide a lovely contrast to the often-drizzly seasonal weather. 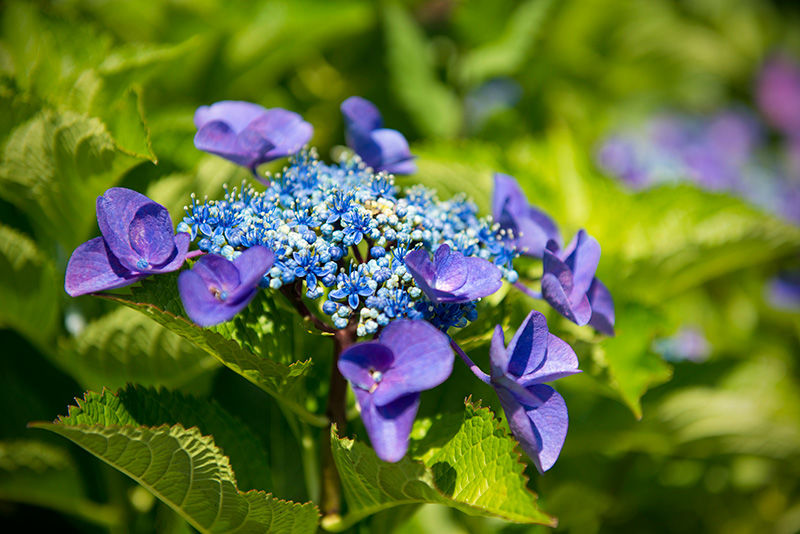 Japan boasts numerous locations famed for hydrangea viewing. One popular spot near Tokyo is the Hakone Tozan Railway, where from mid-June through July train carriages trundle along tracks bursting with thousands of colorful hydrangea blossoms. 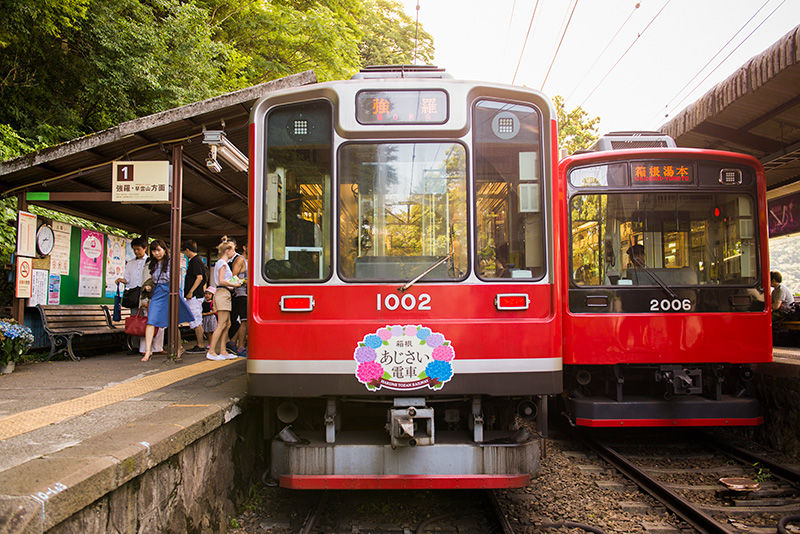 The “hydrangea train” waits to depart.

The Hakone Tozan line, one of Japan’s few mountain railways, consists of two sections, the main line from Odawara to Gōra Station and the Hakone Tozan Cable Car that continues to Sōunzan Station. During blossom season carriages on the line transform into “hydrangea trains.” 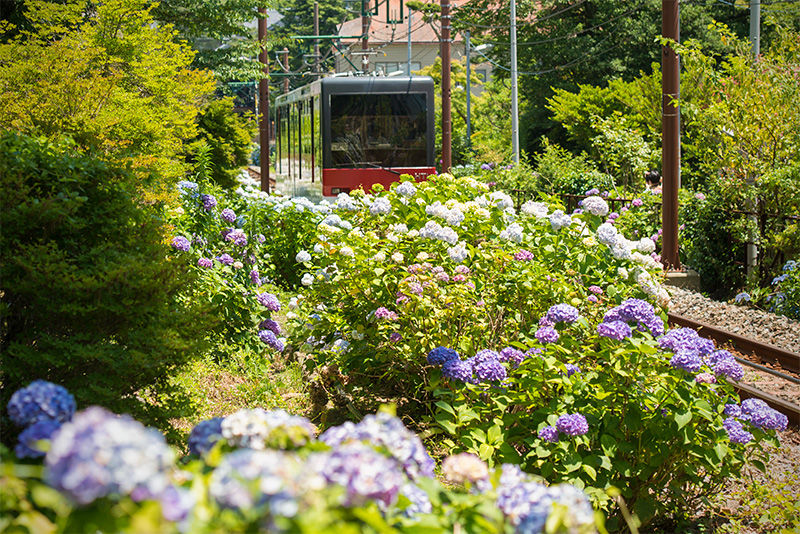 A cable car rolls past rows of hydrangea.

One of the most spectacular spans is the roughly 16-kilometer course stretching between Hakone Yumoto on the main line and Sōunzan. Bordered by around 10,000 hydrangea, the steep track winds through verdant woods and narrow valleys as it climbs to an altitude of 750 meters. The difference in elevation produces an extended blossom season that slowly moves up the line. 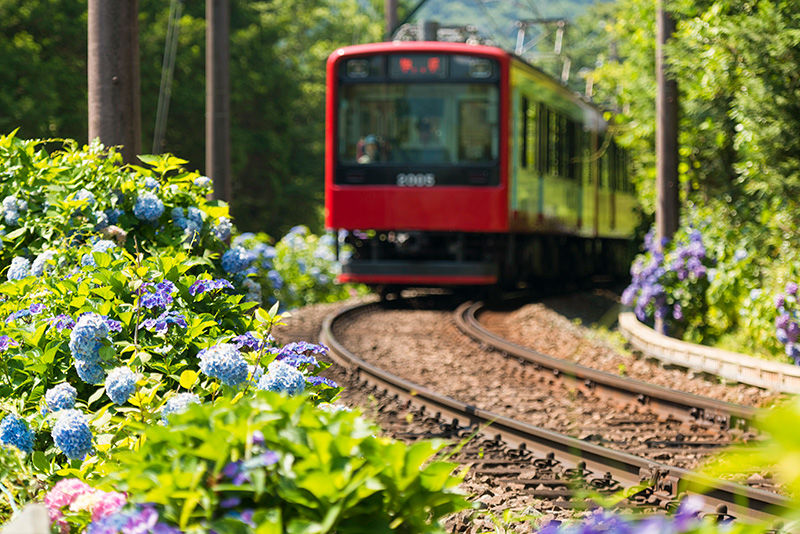 The Hakone Tozan Railway boasts some very steep gradients as it makes its ascent. 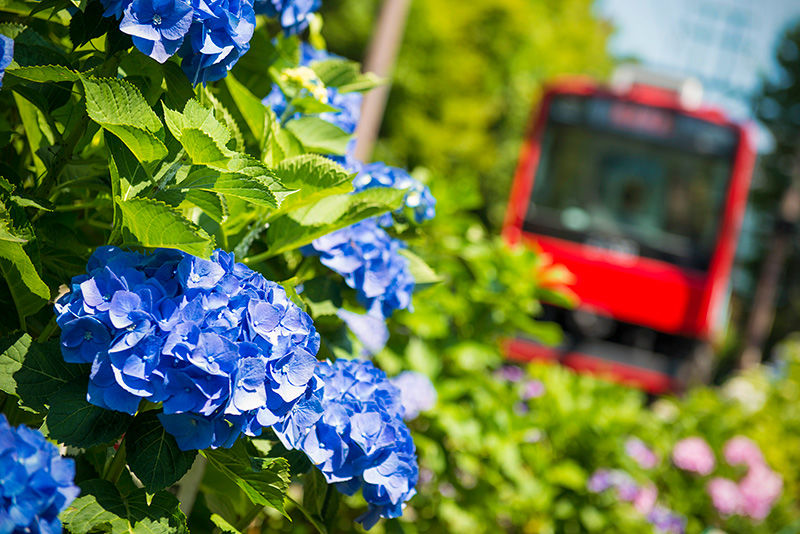 According to Hakone Tozan line employee Ichihara Kenta, workers began planting hydrangea in the 1970s to supplement wild plants growing along the tracks. As the number of plants grew, people began to flock during the rainy season to see the flowers, turning the blooms into a local tourist attraction and boosting ridership for the train line. 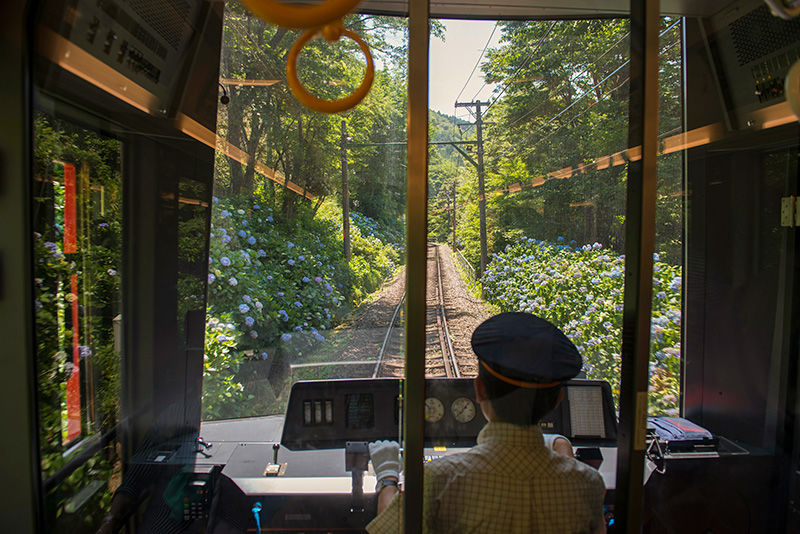 A train makes its way along a corridor of hydrangea.

Ichihara insists that the railway takes the job of tending the plants very seriously. “During the last few weeks of  May each year employees plant seedlings and prune older bushes,” he says. “Even the company president gets involved.” Ichihara adds that the hardy perennials are relatively easy to care for. 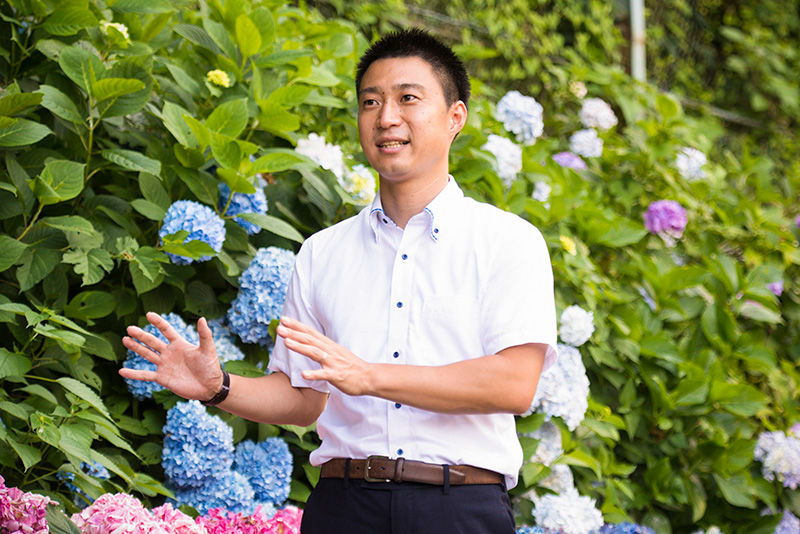 Once Upon a Time

Japanese literature is filled with descriptions of flowers, although references to hydrangea are comparatively few. The Man’yōshū, Japan’s oldest poetry collection, contains two poems that mention the plants, suggesting that they have been cultivated in the country from at least the middle of the eighth century when the anthology was compiled.

Hydrangea found in gardens around the world are thought to descend from varieties originating in Japan. The first specimens were brought to Europe from China in 1790 to be planted at England’s Royal Botanic Gardens near London.

Bavarian-born physician Philipp Franz von Siebold (1796–1866) is credited with popularizing the plants on the continent. Siebold, a pioneer of Japanese studies, is said to have become enamored of hydrangea while serving at the Dutch settlement on Dejima in Nagasaki. After returning home, he compiled his work Flora Japonica that introduced Japanese hydrangea and other varieties of plants to Europeans. 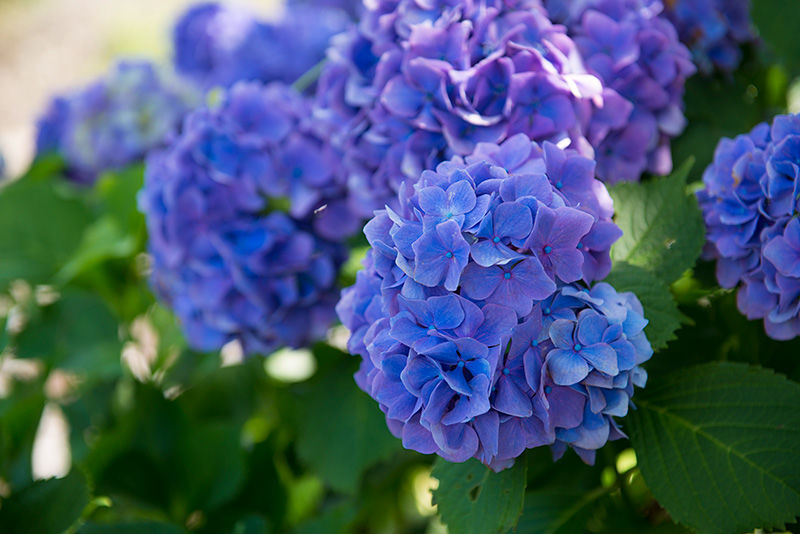 Passengers on the Hakone Tozan Railway can enjoy a wide assortment of hydrangea as they travel up and down the tracks, including species native to Japan and varieties developed abroad.

Two of the most representative types are lacecap and mophead hydrangea. The gaku-ajisai, an indigenous species of lacecap, are found in abundance and are characterized by a cluster with a fringe of flat flowers around an inner disc of smaller blooms.  In contrast, mophead varieties have robust, ball-like clusters. 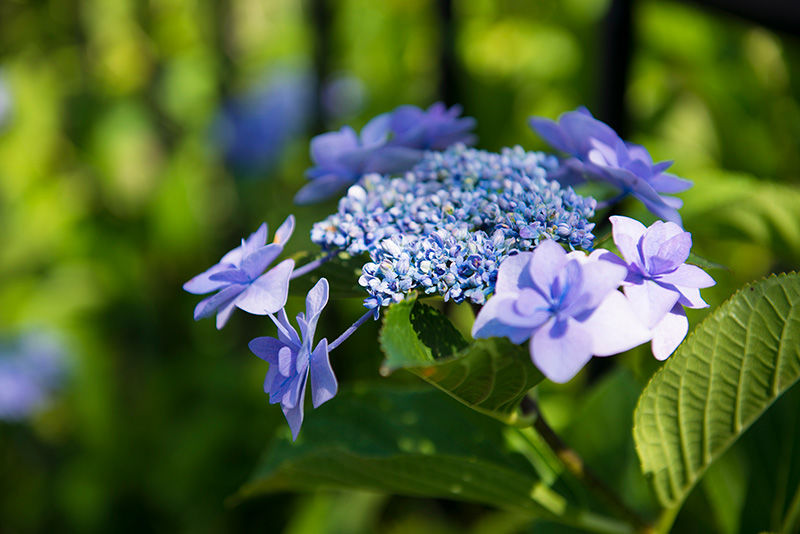 A gaku-ajisai in full bloom. 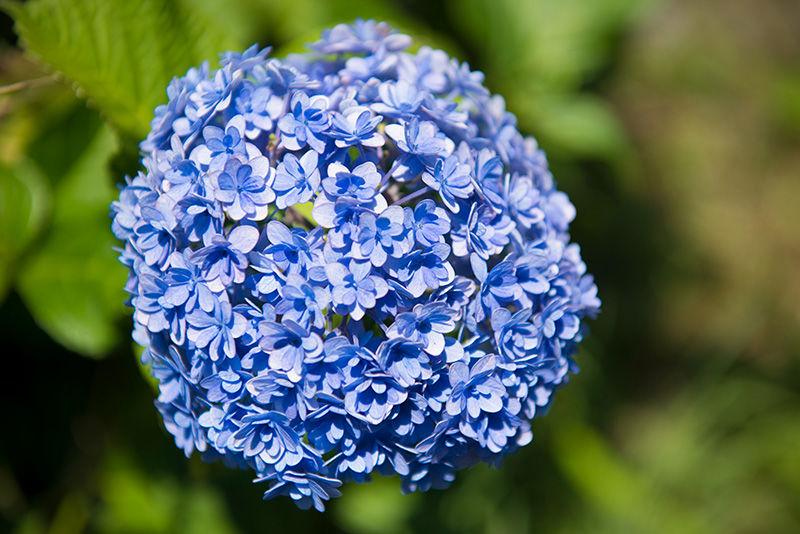 A cluster of mophead hydrangea flowers.

Riders can also enjoy a rich variety of colors and hues. Most lacecap and mophead types bloom either blue or pink, depending on the pH of the soil. The rainy season tends to turn the ground slightly acidic, producing the blue flowers typically associated with tsuyu. However, changes in weather and other conditions can also cause hydrangea flowers to be pink. There are also varieties like the “Annabelle” and yama-ajisai that have white blossoms. 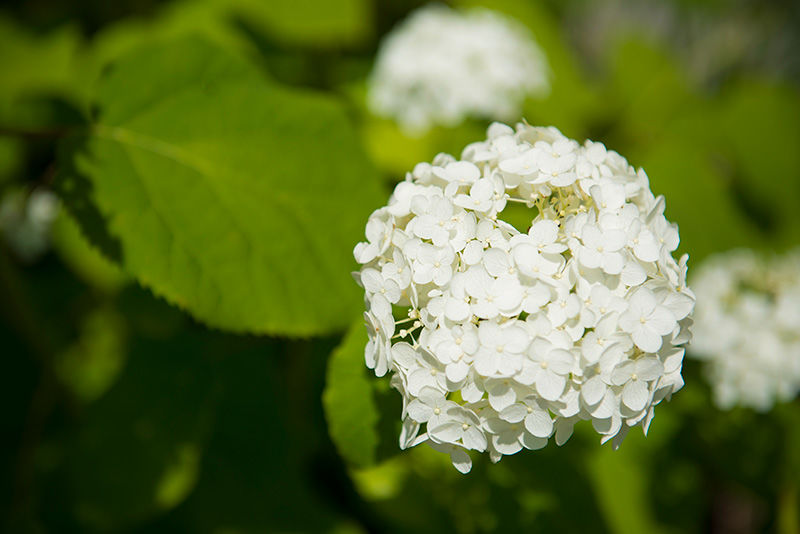 The delicate white blossoms of the Annabelle. 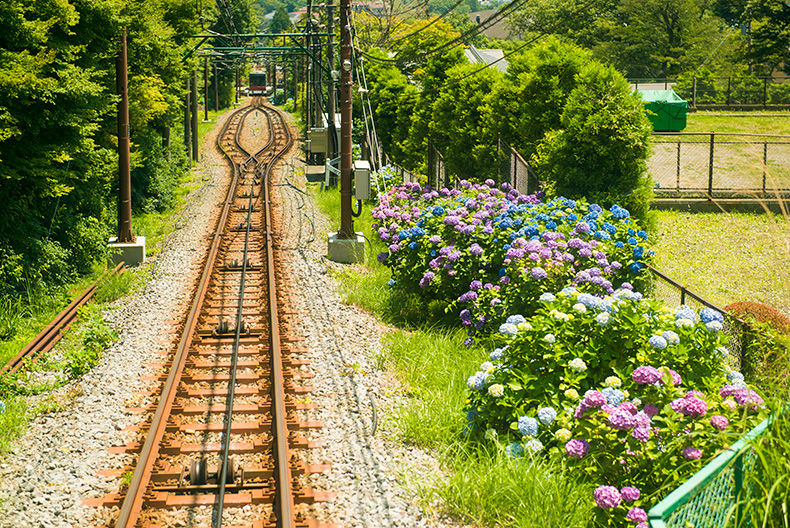 A profusion of color along the cable car track.

Hydrangea are lovely any time of day, but Ichihara recommends the early morning hours, when dew can still be seen glistening on the plants, as the best time to enjoy the flowers. 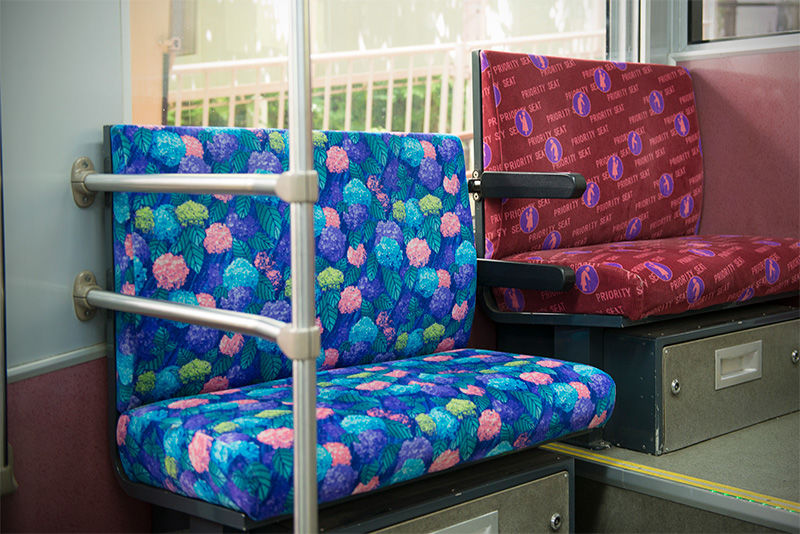 A seat on the cable car with a hydrangea design.

Night owls, though, may prefer to do evening flower viewing. From mid-June to early July the railway illuminates sections of track and runs a special night train that gives passengers a unique hydrangea experience. 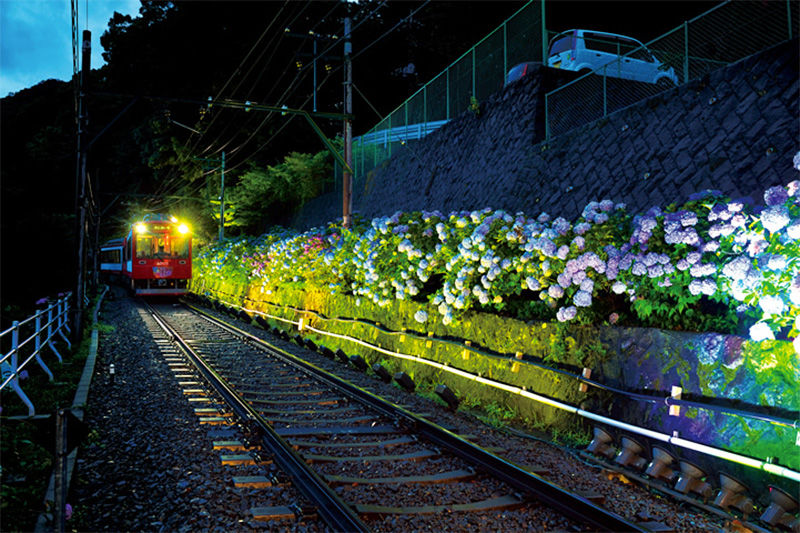 Hakone offers a broad range of attractions, and its proximity to the Tokyo metropolitan area—Hakone Yumoto Station is just 90 minutes from Shinjuku Station on the Odakyū Romance Car limited express trains—makes it an ideal destination for day trips at any time of year.

Visitors to Hakone will want to take advantage of Odakyū Railway’s Hakone Free Pass. The multi-day rail pass provides unlimited use of the Hakone Tozan Railway and Cable Car between Odawara and Sōunzan as well as Hakone Tozan buses, the Hakone Ropeway, and Hakone Sightseeing Boats on nearby Lake Ashinoko.