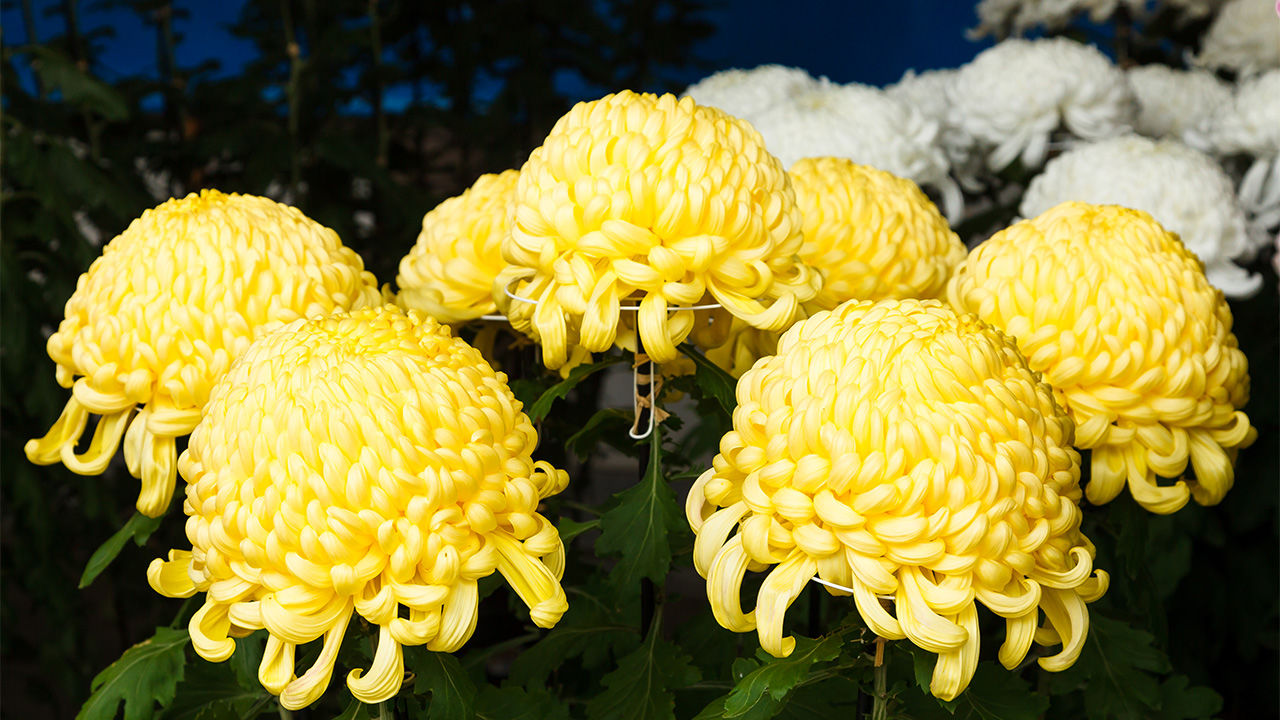 The Chrysanthemum: Flower of Emperors

Culture Oct 22, 2018
The Kiku Matsuri, held each November at Tokyo’s Yushima Tenmangū shrine, is a gorgeous festival of chrysanthemum blossoms. Here we present just a few samples from the wondrous feast for the eyes.

Asked what flower represents their country, most Japanese are likely to point to cherry blossoms. Actually, though, the “official” Japanese flower is the 16-petal chrysanthemum used for the imperial seal. Japan has no legally defined national flower or seal, but you will see the imperial seal on the cover of Japanese passports, on some Japanese coins, and over the doors of Japanese diplomatic facilities overseas.

Chrysanthemums originated in China and were imported into Japan as a medicinal plant in the Nara period (710–94). The chrysanthemum features frequently in the Kokin Wakashū anthology of poetry compiled in the Heian period (794–1185), suggesting that it was a popular flower in the imperial court, not only for medicinal purposes but also for viewing. It is believed the chrysanthemum became the imperial symbol when the emperor Go-Toba (1180–1239; r. 1183–98) chose the flower as his personal emblem.

In Japan alone there are more than 350 types of chrysanthemums, just some of the 200,000 varieties said to exist in the world. Those developed in Japan are known as wagiku to distinguish them from overseas varieties. In particular, wagiku with unique colors and shapes developed in the Edo period (1603–1868) are referred to as kotengiku, meaning “classic chrysanthemums.” Wagiku are divided into three basic categories defined by the size of their blossoms: ōgiku (large), chūgiku (medium), and kogiku (small). Ōgiku with diameters of 18 centimeters or more are further subdivided into atsumono (thick blooms), kudamono (tubular or spidery flowers), and ichimonji (flat blossoms with two overlapping rows of petals, the type of chrysanthemum on which the imperial crest is based). Medium-sized chūgiku, at 9–18 centimeters in diameter, are often used for funeral arrangements, while the smaller kogiku are used in bonsai or grown in flower pots and garden flower beds, where they are a popular favorite. 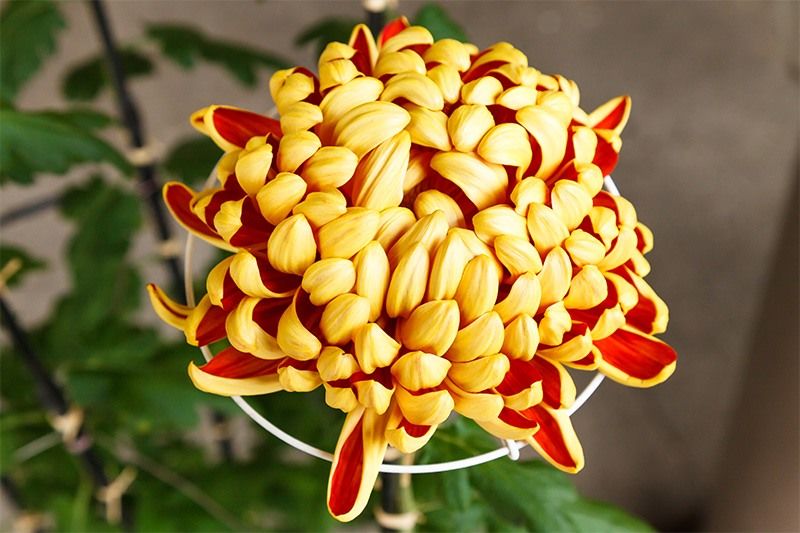 Tomoenishiki, a classic variety from the Kaga region in northwestern Japan, is noted for its elegant two-colored petals. 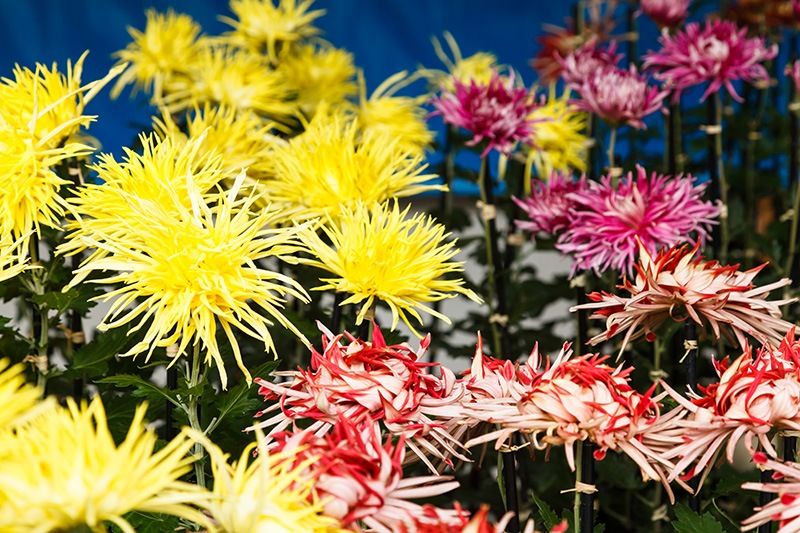 Edogiku, a variety developed in what is now Tokyo.

A Celebration of Floral Variety and Beauty

The annual Kiku Matsuri, held each year in November at the Yushima Tenmangū shrine in Bunkyō, Tokyo, offers a wonderful opportunity to view the gorgeous varieties of chrysanthemums carefully grown and cared for by the roughly 60 members of the Bunkyō Aikiku Kai, a local floriculture association of chrysanthemum enthusiasts. Prominent are the displays of magnificent ōgiku, which feature more than 2,000 blossoms representing 32 varieties, including a number grown by local elementary and junior high school students. The festival attracts as many as 100,000 visitors every year. 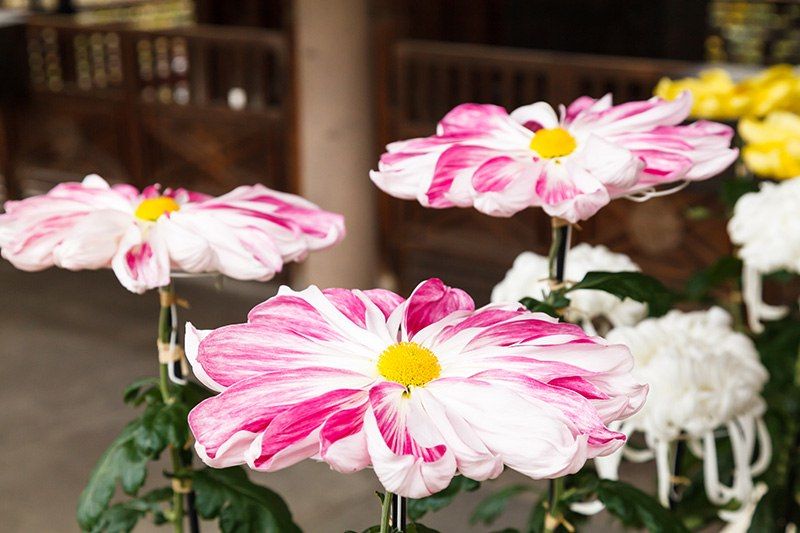 The ichimonji variety is the model for the imperial crest. 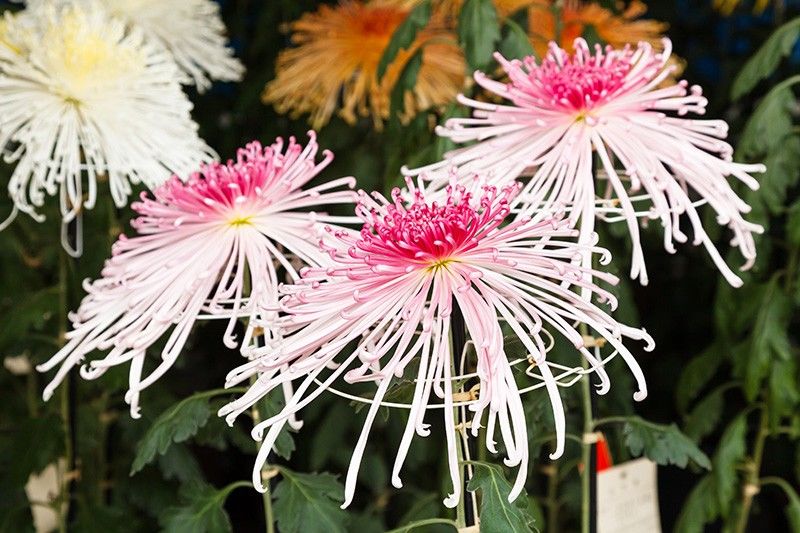 “The more loving care you devote to them, the more beautiful they become,” says Sugimoto Keiji, chairman of the Bunkyō Aikiku Kai. “We grow our chrysanthemums from seed, shoots, and sometimes bud cuttings, but just because you get good results this year doesn’t mean the same technique will work next year,” he continues. You can keep the particular variety going, but how well they will blossom depends on how much care you give them. Chrysanthemums reflect your very soul; you have to grow them with dedicated love and care.” 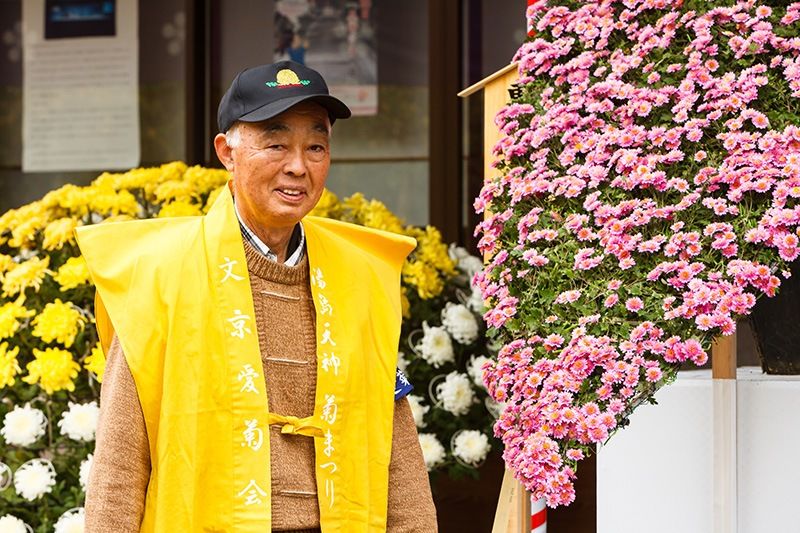 Bunkyō Aikiku Kai chair Sugimoto Keiji with one of his masterpieces of cascading pink chrysanthemums.

Prizes are awarded at the Kiku Matsuri. We asked Sugiyama what the criteria are for selecting the best from such an array of splendid specimens.

“First, we look at overall appearance. Are the petals well-aligned or do they spread out every which way? One of our objectives is to preserve traditional varieties, so we also look at how well a flower meets the criteria for its variety. Negative points are given for the presence of bugs, signs of disease, or fallen leaves.”

Specimens of the same variety are further divided into sub-groups according to how they are grown and pruned. For the large ōgiku, the classic arrangement is three blossom-tipped branches from one stem, known as sanbon-jitate. The blossoms are considered the most beautiful when they are staggered with the tallest blossom in the back representing the heavens, the one on the left earth, and the one on the right humankind. This triangular arrangement is achieved by meticulous attention to lighting and other factors as the blossoms are cultivated. The way the flowers are timed to blossom simultaneously—and just in time for the festival—is an amazing technical feat. 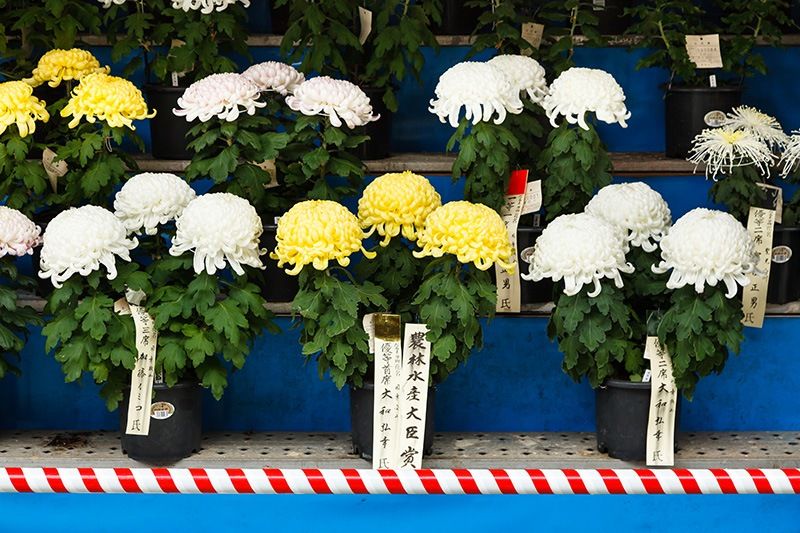 Sanbon-jitate specimens no more than 60 centimeters tall, known as daruma. 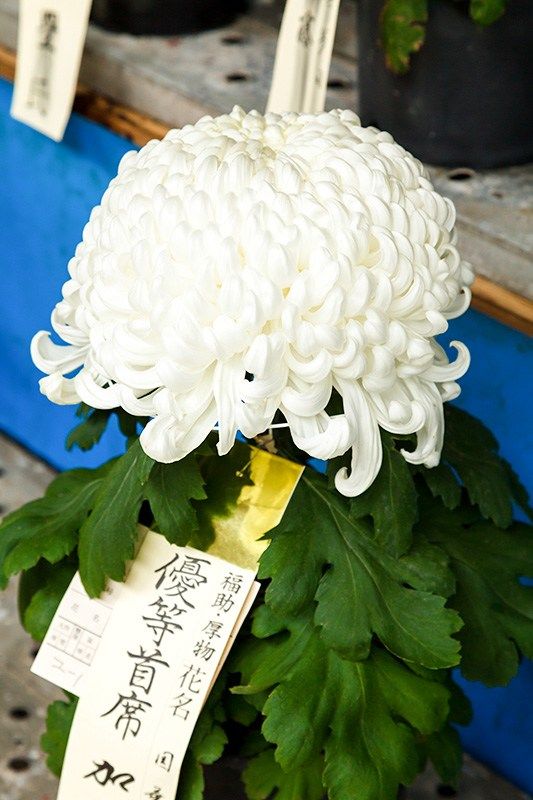 Other types of pruning and display include kengai frames of cascading kogiku and large senrin-zaki clusters of numerous blossoms coaxed from a single ōgiku stem. Finally, you are certain to be awed by the many bontei arrangements of chrysanthemum bonsai, each with its own unique theme, and the kiku-ningyō dolls, a regular feature of any chrysanthemum festival, elaborately dressed in costumes made of chrysanthemum blossoms. 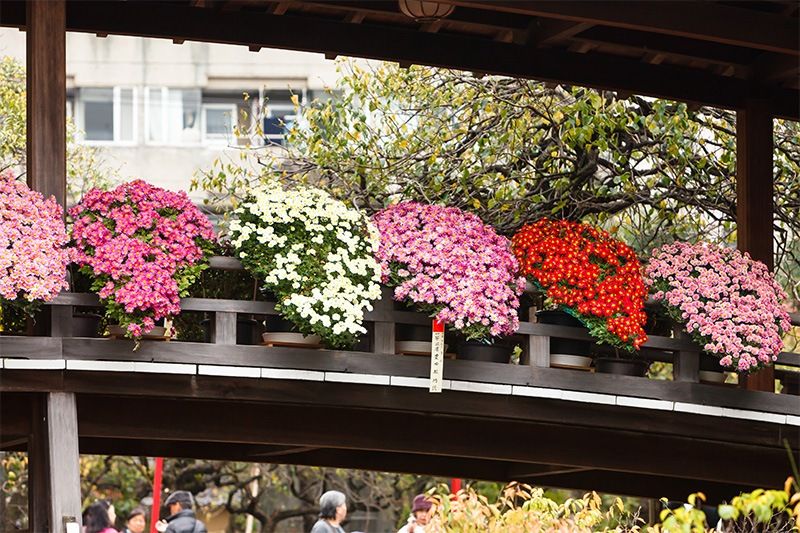 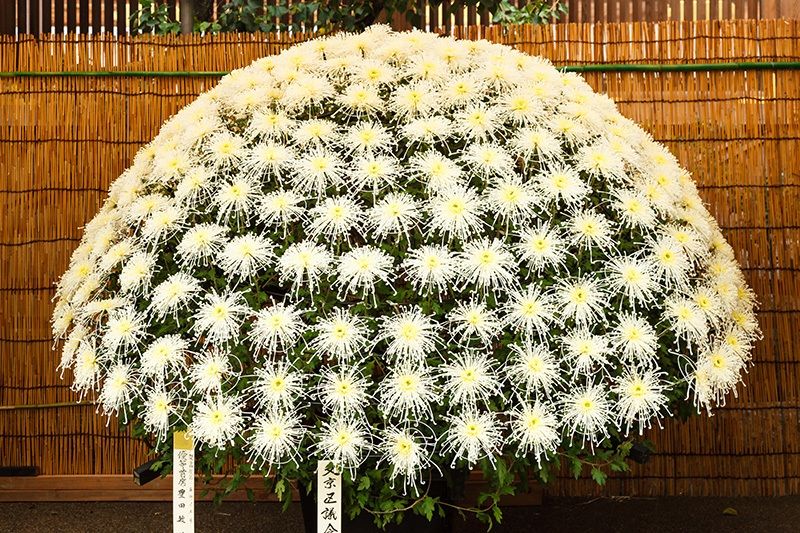 A meticulous senrin-zaki arrangement of blossoms branching out from a single stem. 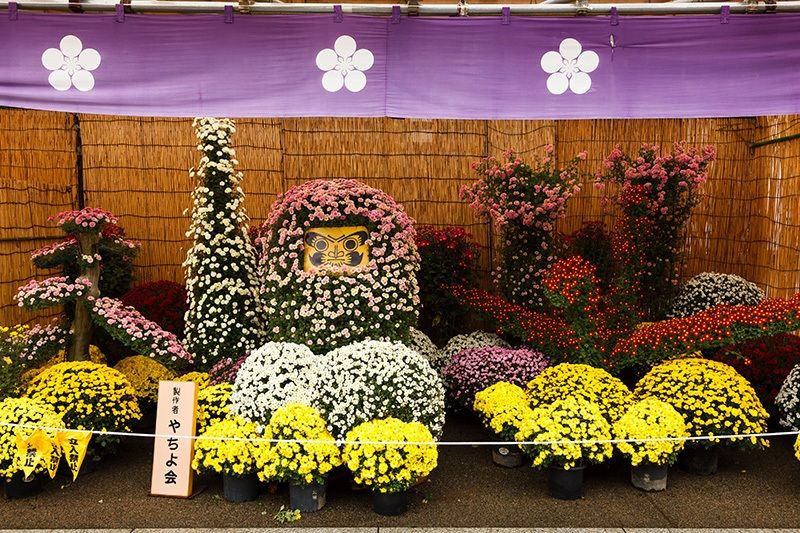 Characters from a historical television drama dressed in chrysanthemum costumes.