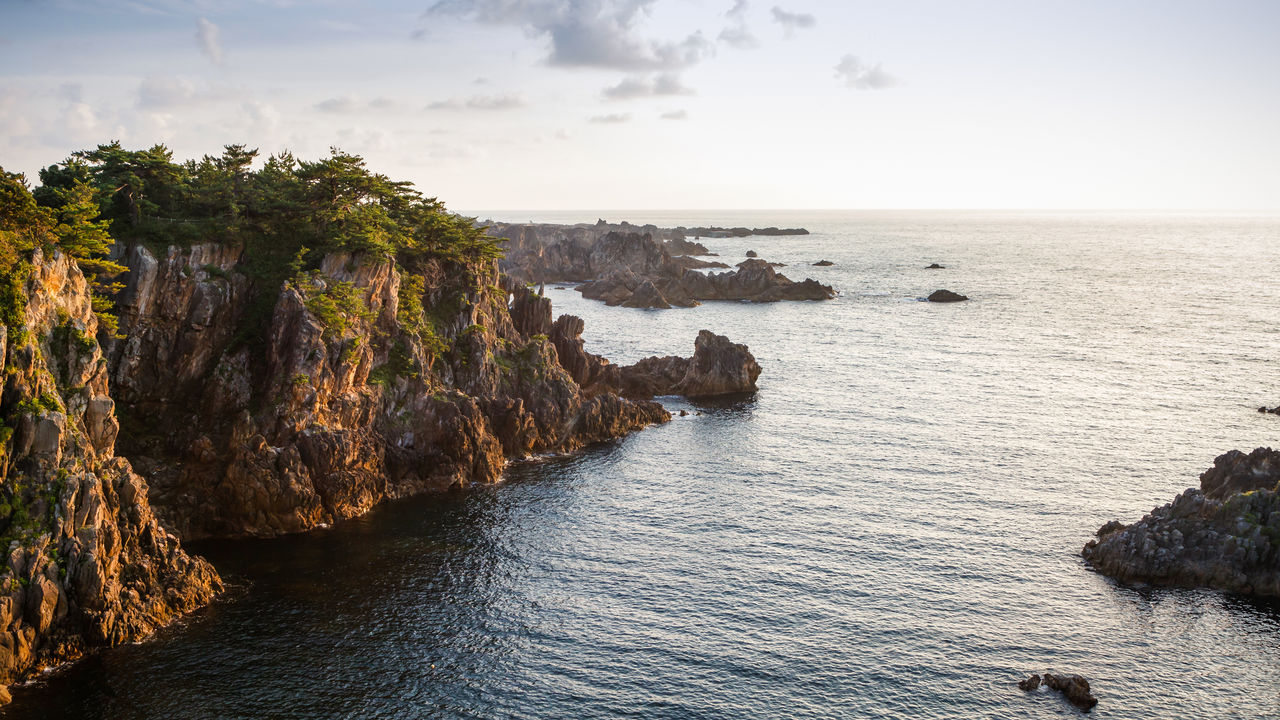 Sado: A Golden Isle in the Sea of Japan

Mar 31, 2018
Sado is one of Japan’s largest islands. It offers visitors stunning natural scenes, captivating cultural experiences, and a mouth-watering array of culinary delights. Just four hours away from Tokyo by Shinkansen and ferry, Sado is full of rich discoveries waiting to be explored.

The Best of Japan in One Island

Sado lies in the Sea of Japan off the west coast of Honshū in Niigata Prefecture. At around 855 square kilometers, roughly 1.5 times the size of central Tokyo’s 23 municipalities, it is Japan’s eighth largest island (including the Northern Territories currently held by Russia), and supports a population of about 57,000. Often called a microcosm of Japan, it offers visitors rich history, diverse culture, and an array of natural wonders.

Contrary to its historical reputation as a remote island—in bygone eras it was where exiles were sent to live out their lives far from the civilization of the main Japanese islands—Sado today is an easy trip from Tokyo. Visitors from the capital can reach the main port of Ryōtsu in around four hours, a journey that includes a two-hour Shinkansen ride and an hour-long sea  journey from the port of Niigata by jetfoil. 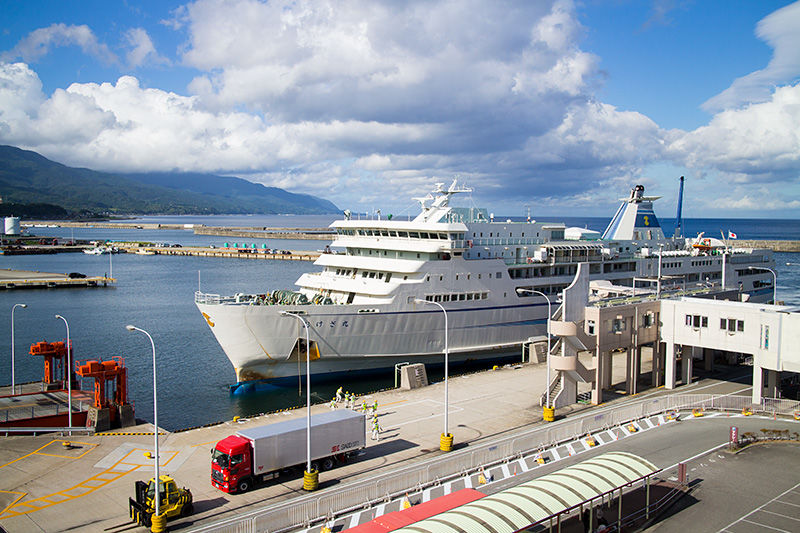 Ryōtsu can be reached in around an hour by jetfoil or in two and a half hours by the less expensive car ferry.Sitting at the confluence of the southern Tsushima Current and colder, northern Liman Current, Sado is marked by cooler summers and milder winters with less snow than mainland Niigata. Its moderate climate is suitable to a diversity of plant life, including varieties of loquats and mandarin oranges common in warmer latitudes as well as cold-tolerant species like pine and oak. 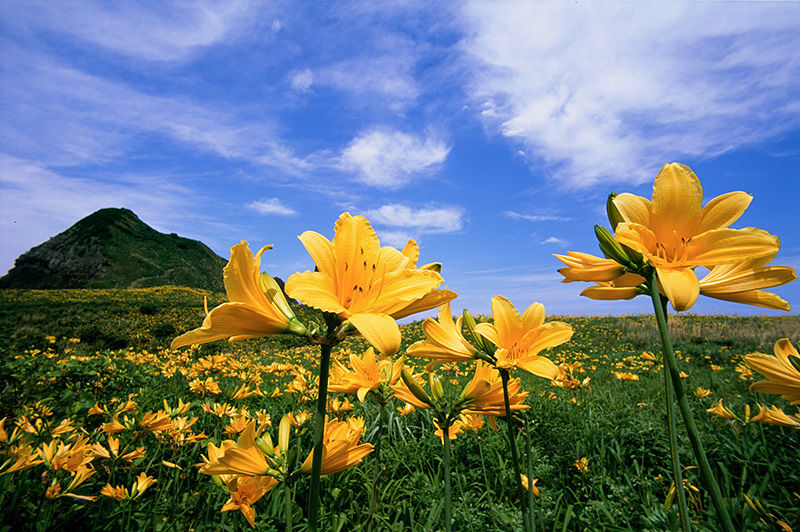 Tobishima kanzō lilies bloom in June near Ōnogame. (© Sado Tourism Association)The ocean currents also bring rich catches of fish and other seafood. In spring and summer the island’s fishing boats haul in species like seabream, squid, and tuna, while in autumn and winter they net cod and yellowtail. Sado’s coastal waters also support abundant stocks of shrimp, abalone, and sazae (horned turban), and oyster farms can be found on the waters of Mano Bay and Lake Kamo, an inlet off of Ryōtsu Bay. 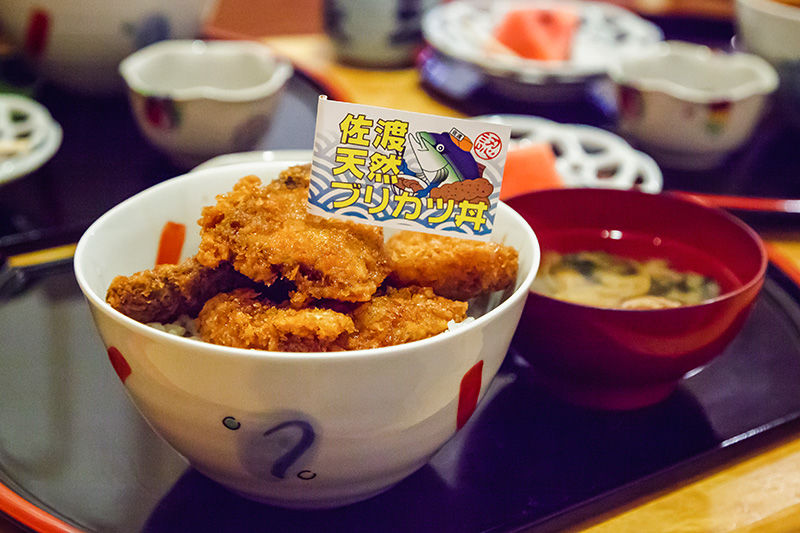 Buri katsudon is a seafood delicacy featuring pieces of fried yellowtail served over rice.Sado boasts a long history of traditional performing arts, including nō theater that grew out of aristocratic culture and displays of swordplay and yabusame (mounted archery) that have roots in warrior society. There are also folk traditions like hanagasa odori, a type of dance featuring decorative straw hats, and ondeko taiko drumming. Visitors will often see these varied artforms performed at festivals and on other occasions. 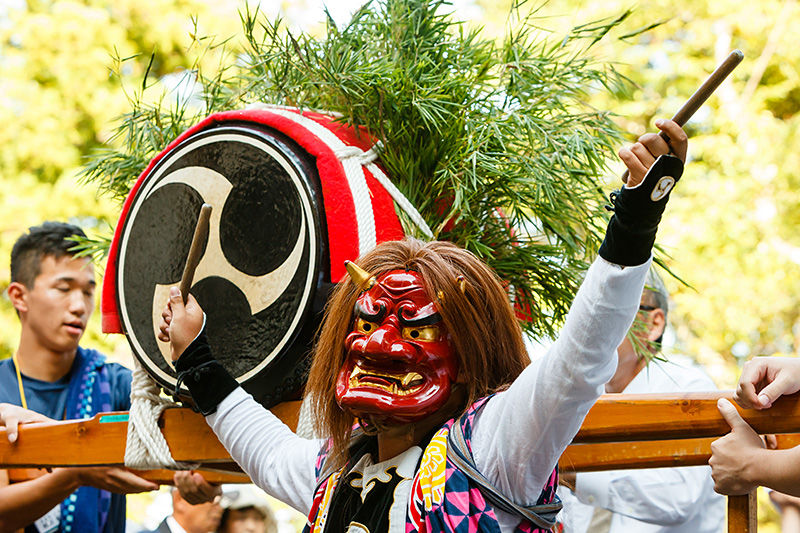 Nakagawa Yūji of Sado’s tourism department says that among the island’s many treasures, its gold mine, crested ibis, and rugged landscape are its crown jewels.

The first of these, the Sado kinzan gold mine, was discovered in 1601. Word of the mountain’s riches quickly spread to the feudal capital of Edo where Tokugawa Ieyasu, founder of the Tokugawa shogunate, subsequently placed the mine and island under direct control of the central government in 1603. In the late nineteenth century the Meiji government introduced new mining machinery and techniques, using the precious metals extracted to help finance the country’s modernization. The mine was finally closed in 1989 after nearly 400 years. There are now efforts underway to register the Sado gold mine as a UNESCO World Heritage Site. 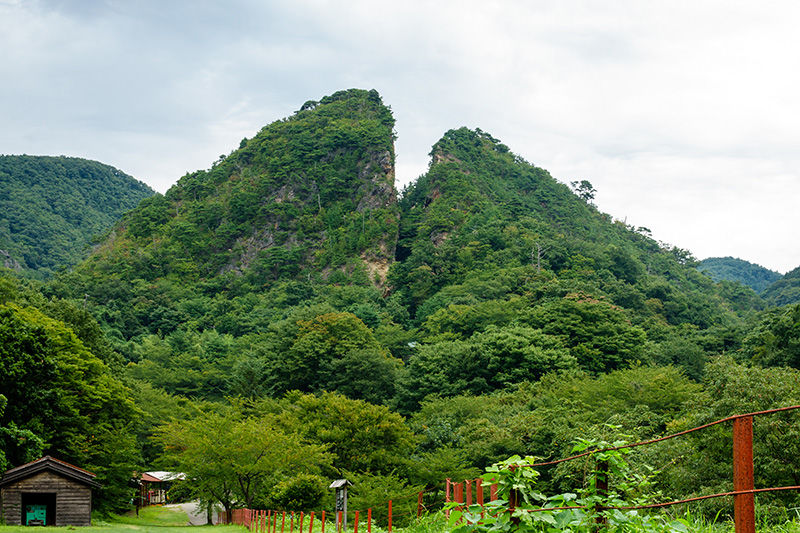 Excavation of the kinzan mine was so intense that tunneling split the mountain in two, giving it its iconic cleft look.Sado’s second gem is the crested ibis. The species suffered declined around Japan due to loss of habitat and use of agricultural pesticides, and by the 1970s Sado was the only place in the country where the birds survived. Japan’s last wild-born crested ibis died in captivity on the island in 2003, but a breeding program with birds loaned from China has enabled the population to rebound to around 300. Local preservation efforts have reduced the use of agricultural chemicals, and in 2011 Sado’s satoyama ecosystem of forested areas near cultivated lands was recognized by the UN Food and Agriculture Organization as a Globally Important Agricultural Heritage System. 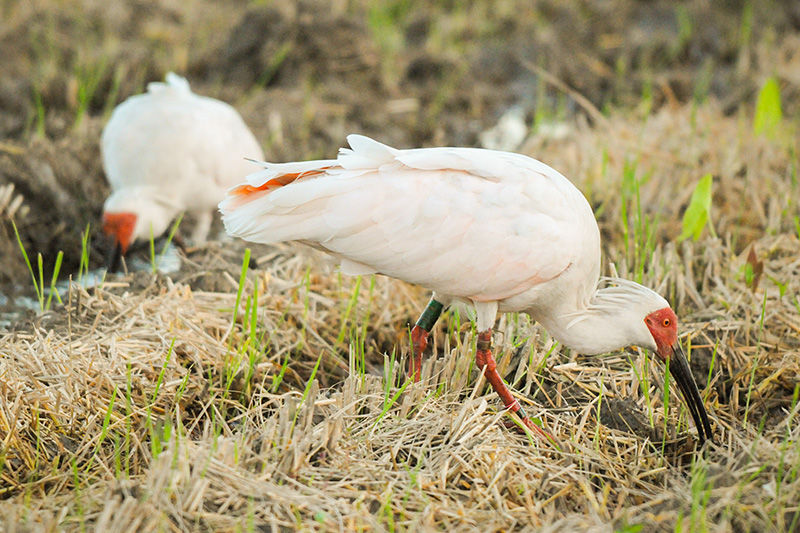 Visitors to the Toki Forest Park can see crested ibis in their natural habitat. (© Sado Tourism Association)Sado’s most expansive jewel is its picturesque landscape. It is the product of complex and ancient geological events that began when the island first emerged from the sea some 30 million years ago through tectonic plate movement. Visitors can see evidence of this early episode in rock strata and marine fossils, some dating back as much as 300 million years. Subsequent volcanic activity has helped sculpt the land further, and together these factors have produced the rocky cliffsides, mountains, and other rugged topographical features that characterize the island. Much of Sado’s scenic areas are within national and prefectural parks and are widely enjoyed by the public. 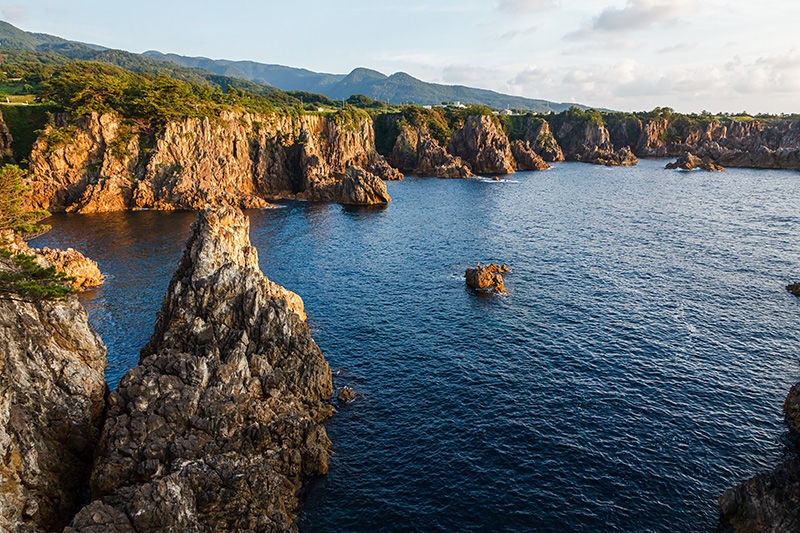 The rugged cliffs of Senkaku Bay on the island’s west coast.

One of the best ways to experience the history of Sado is to explore the Sado kinzan gold mine. At the museum visitors can traverse old shafts dug during the Edo period (1603–1868) and see the harsh conditions and back-breaking work miners had to endure in the process of extracting the precious metal from ore. 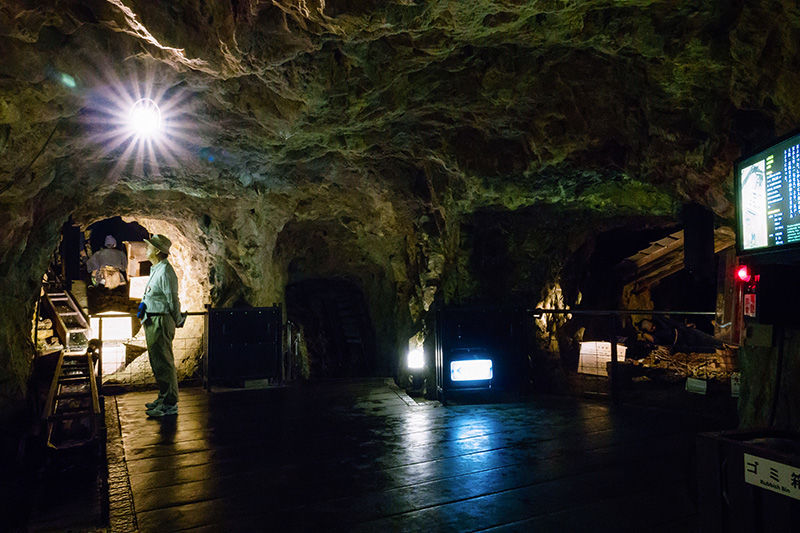 Visitors can walk through old shafts to see what conditions were like inside the mine.The influx of workers and administrators from the feudal capital of Edo influenced the island’s culture in many ways. According to Nabata Shō, an employee at the mine’s museum, new arrivals brought the latest fashions with them to the island. “When laborers tied up their hair,” he explains, “they would often do it in a style popular in the capital.”

Officials sent to oversee the mine’s operations helped spread the traditional performing art of nō throughout the island. A third of Japan’s nō stages are found on Sado, and dances, chanting, and other aspects of the art remain popular pursuits among islanders. Zeami, an influential nō performer and playwright banished to the island in 1434, is often attributed with establishing the art on Sado, but it is mine administrator Ōkubo Nagayasu (1543–1613) who deserves the real credit. Born in a family with strong connections to nō and other performing arts, Ōkubo, an accomplished nō actor in his own right, brought a band of performers and musicians with him when he arrived on the island in 1603. 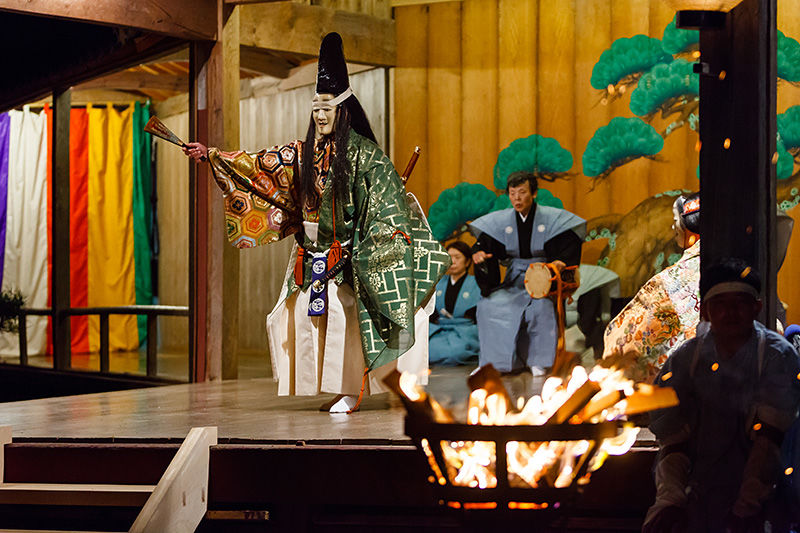 Nighttime performances of nō are held at the Shiizaki Suwa Shrine from spring to autumn.Mine work was labor intensive—the population of the nearby village of Aikawa swelled to 50,000 at its peak—and as gold production grew, administrators faced the task of feeding Sado’s burgeoning population of workers and other inhabitants. To increase rice yields, the government expanded agriculture land by creating stepped paddies along coastal hillsides. These terraced fields now make up one of Sado’s most stunning rural scenes and are also an important habitat for the crested ibis. 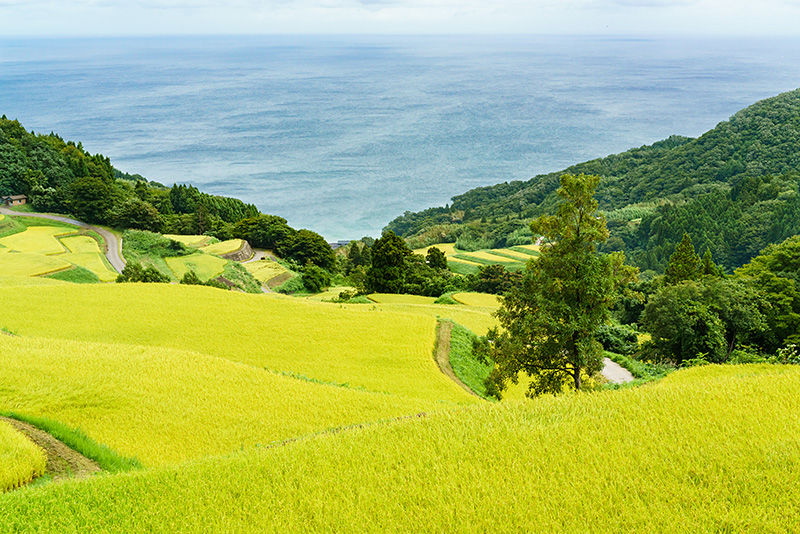 The Iwakubi Shōryū terraced rice fields with the Sea of Japan in the background.

Supporting the kinzan mine also required reliable maritime transport to bring in workers and ferry gold to the mainland. In 1614 the shogunate opened a new port along the Ogi coast on the southern tip of the island that developed as a center of commercial shipping. Many shipbuilders and merchants settled in the nearby hamlet of Shukunegi, where today closely packed wooden buildings remain as a testament to that prosperous era. 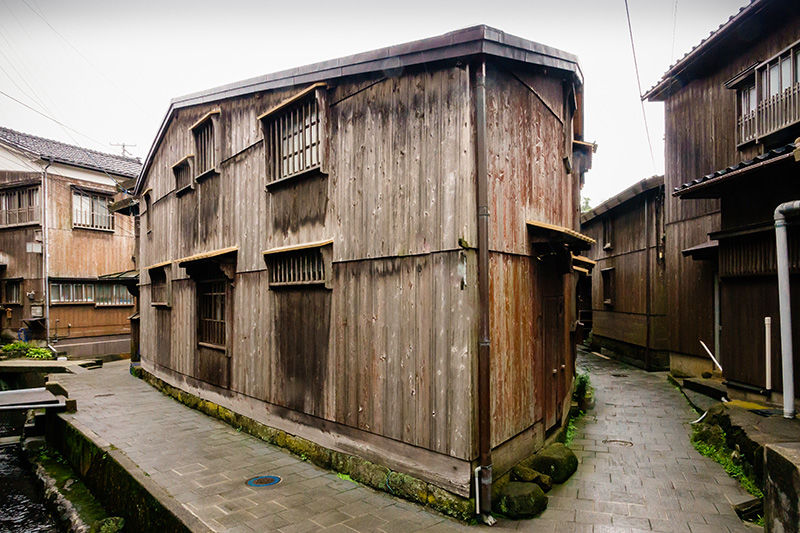 The iconic triangular sankakuya house is one of over 100 historic buildings that pack Shukunegi’s narrow streets. The hamlet is designated a national preservation district.The merchant shipping industry linked Sado with commercial centers around Japan. West-bound boats carrying rice from the fertile fields surrounding Sakata in what is now Yamagata Prefecture called at Sado’s ports on the way to the markets in Osaka. These ships influenced the island’s culture with customs and practices brought from both the northern provinces and the Kansai region in western Japan. 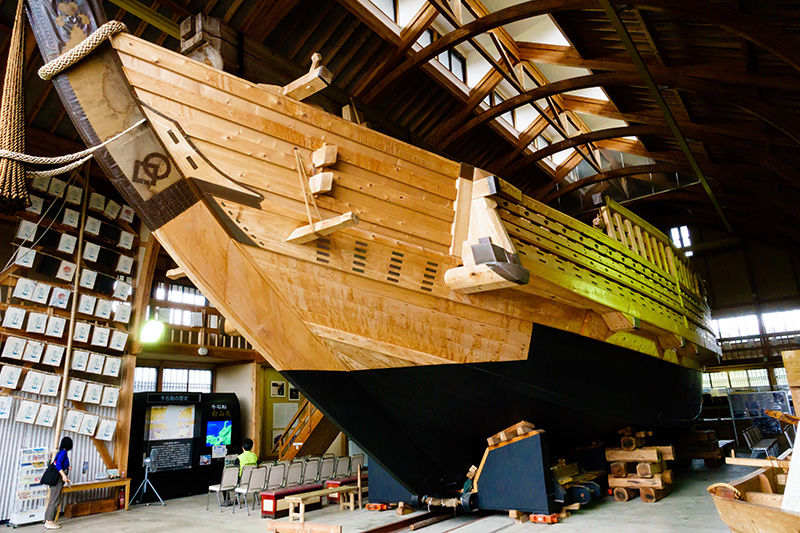 The Hakusan-maru, a replica of the sengokubune merchant ships, on display at the Ogi Folk Museum.Ogi is also known for its tub-like taraibune boats. Gold production made heavy use of wooden tubs and buckets, and the craftsmen who built these essential items used their expertise to create the circular vessels. Historically they were used by locals to collect seaweed, shellfish, and other marine products from shoals, but today serve as popular tourist attractions. 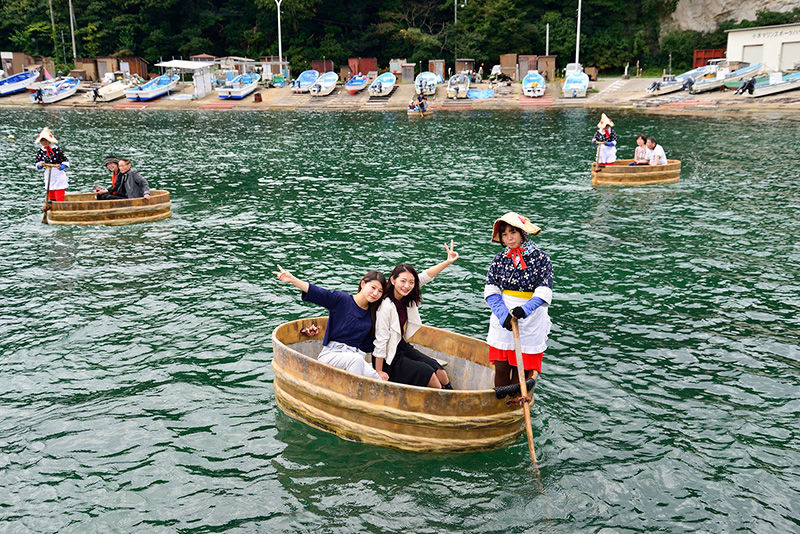 Visitors to Ogi can go for a ride around the cove in a taraibune boat. (© Sado Tourism Association)Sado is home to the well-known Mumyōi ceramic ware tradition. The pottery is made with iron-rich clay originating from near the kinzan mine and is characterized by a rusty red color. In 2003 Itō Sekisui V became the first master of Mumyō ware to be recognized as a Living National Treasure. 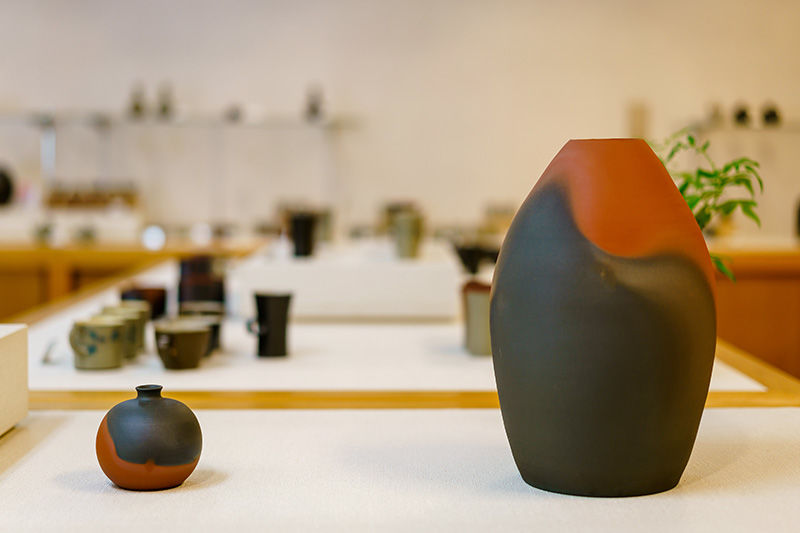 Works of Mumyō ware by Itō Sekisui V can be viewed and purchased at the artist’s gallery in Aikawa.Other legacies of the kinzan include Sado’s many temples and the numerous walls and staircases around the island built by stonemasons and other skilled workers who came during the heyday of the mine. But even before gold was discovered, Sado was the destination for many prominent thinkers and cultural figures, including the previously mentioned Zeami as well as influential Buddhist priests and even an emperor.

Starting from the Nara period (710–94) exiles, political and otherwise, were sent to the island. Following the Jōkyū War in 1221, the retired Emperor Juntoku was banished to Sado for his role in the uprising. During the Kamakura period (1185–1333), the priest Nichiren was expelled by the feudal government and used his time on Sado to establish temples and create core tenets of a new branch of Buddhism. 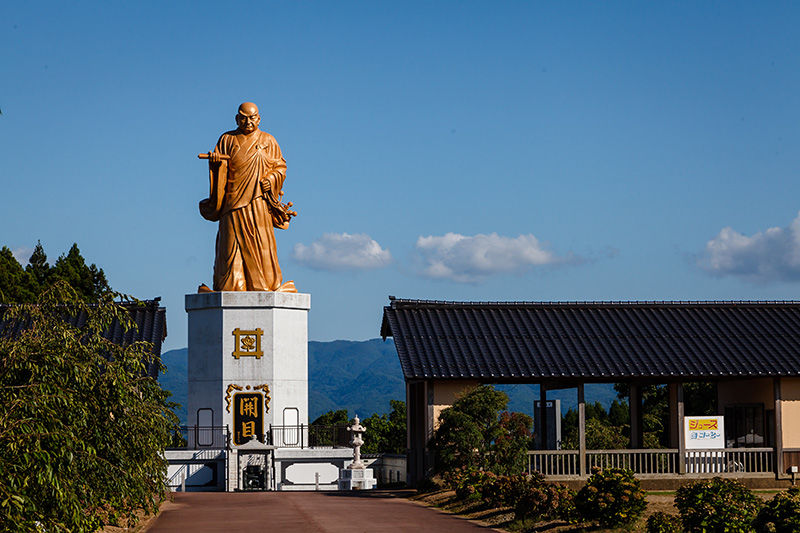 A 13-meter bronze statue of the Buddhist priest Nichiren stands near the port at Ryōtsu.

Sado has an extensive bus system, but its limited schedule of runs makes it inconvenient for travelers who are only staying for a short period. For time-constrained visitors wanting to make the most of their trip, renting a car is a good way to see the main attractions. The 30-kilometer long Ōsado Skyline linking Aikawa to Kanai is a popular route. Climbing to over 900 meters, the roadway offers stunning views of the island’s natural scenery all year round. 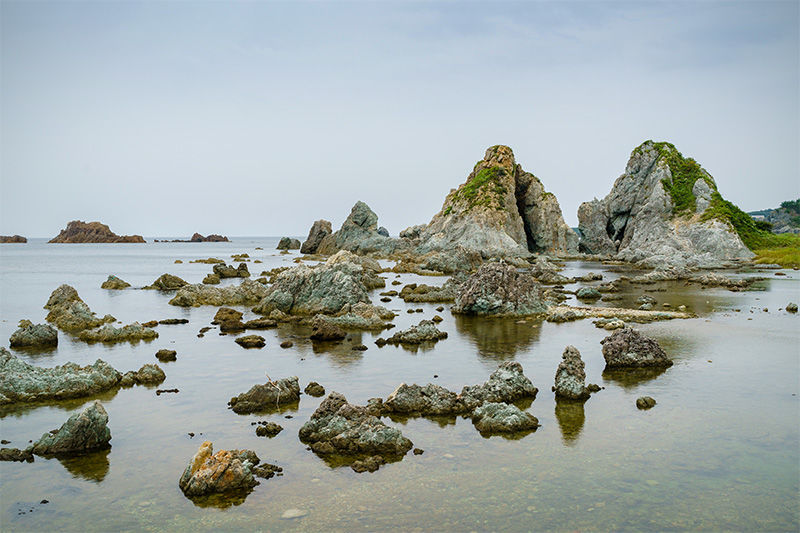 The rocky Nanaura coast is home to the meotoiwa, two large stones said to be husband and wife.Sado’s extensive coastline is best enjoyed at a leisurely pace, and travelers with a little more time to explore should consider renting a bicycle. Cyclists can schedule rests to enjoy meals of fresh seafood and local sake at restaurants along the route and to soothe weary muscles with a dip in a hot spring.  For more ambitious visitors, the island also hosts a number of cycling and triathlon events. 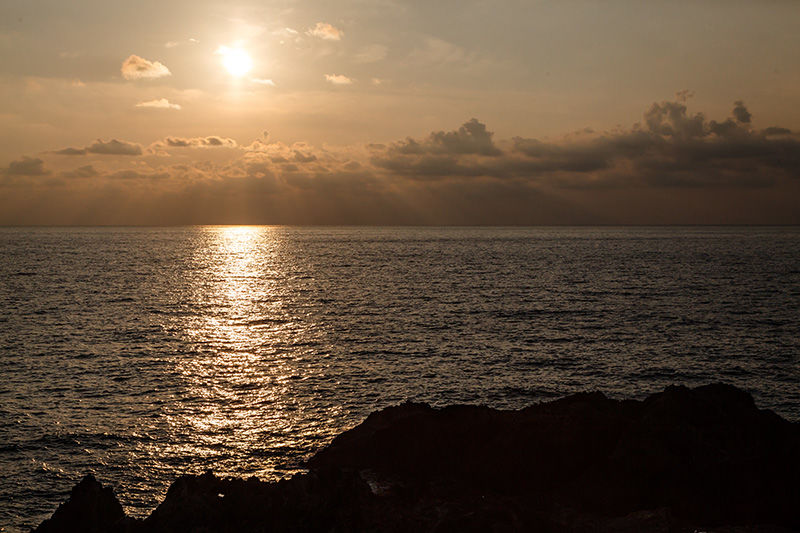 Sunset at Senkaku Bay.(Originally written in Japanese by Aoki Yasuhiro and published on December 18, 2017. Photos by Miwa Noriaki except where noted.)