Teaching the Ways of the Samurai: An Interview with Ogasawara Kiyomoto

Culture Aug 31, 2017
Ogasawara Kiyomoto is heir to a school of samurai mounted archery, yabusame, and etiquette that stretches back over 800 years. Today, he teaches these ancient arts under the supervision of his father Kiyotada, the thirty-first-generation leader of the Ogasawara-ryū tradition. 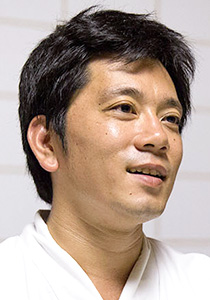 Neuroscientist, etiquette instructor, equestrian, and archer; instructor in the Ogasawara-ryū school. Born in Setagaya, Tokyo, in 1980. At the age of three, he began training for mounted archery. As a fifth-grader, he performed his first archer role in the yabusame ritual dedicated to Tsurugaoka Hachimangū Shrine in Kamakura. After graduating from Osaka University, he earned his PhD in neuroscience from the University of Tsukuba. In keeping with the Ogasawara family discipline, “one should not make a living out of teaching kyūhō [etiquette and archery],” he currently works at a pharmaceutical company as a researcher. Author of books including Ogasawara-ryū yabusame.

Full of pageantry, ritual, and drama, yabusame is the art of traditional Japanese mounted archery. At annual festivals throughout Japan, archers decked out in classical hunting attire fire arrows at fixed targets as their steeds gallop along a 250-meter-long path. Ogasawara Kiyomoto, 37, is the descendant of samurai who taught yabusame and etiquette to Japan’s shōgun, or supreme warlords, beginning in the Kamakura period (1185–1333). Today, he preserves this proud tradition at the family dōjō in Setagaya, Tokyo, where he also instructs students in traditional etiquette.

INTERVIEWER You’re an instructor in a long line of teachers. How far back does it go?

OGASAWARA KIYOMOTO We have a tradition of over 850 years. My ancestor Ogasawara Nagakiyo founded the Ogasawara-ryū school in 1187. He instructed Minamoto no Yoritomo, the first shōgun of Japan, in etiquette, archery, and mounted archery, arts known as kyūhō. The school’s first display of yabusame mounted archery was given at Tsurugaoka Hachimangū Shrine in Kamakura, and you can still see this performed today every September. My father Kiyotada is the thirty-first-generation head of our tradition.

INTERVIEWER What are the origins of yabusame?

OGASAWARA The tradition began as a samurai discipline for fighting and was called kisha or horseback archery. But only one ritualistic form of this can be called yabusame.

INTERVIEWER How was your family able to preserve this through the upheavals of Japanese history?

OGASAWARA When the shōgun system ended in the nineteenth century, other families commercialized their arts to support themselves, but we decided to preserve ours while working regular jobs. Kiyokane, the twenty-eighth head of the household, opened the Ogasawara-ryū school to the public in Tokyo’s Kanda while also teaching etiquette at schools. To maintain the purity of our tradition, it’s our rule not to make a full-time living from instruction. 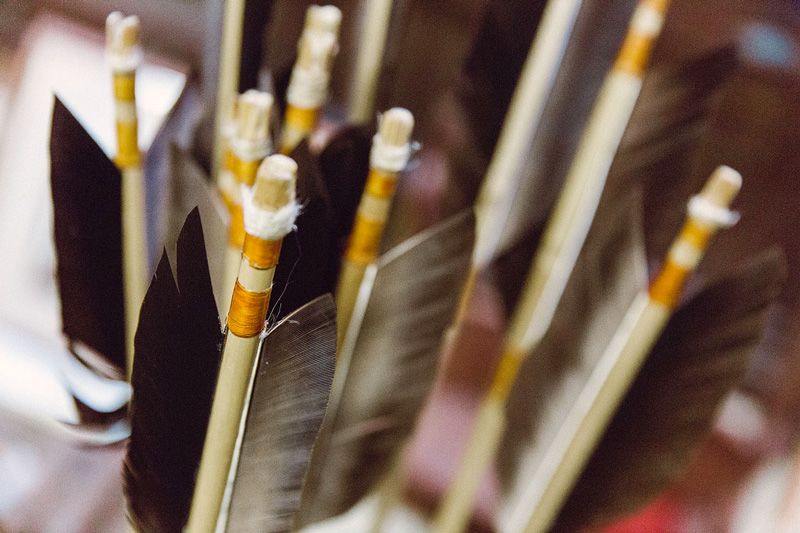 Feathers from hawks and eagles are used in making yabusame arrows.

INTERVIEWER What do you do to support yourself?

OGASAWARA I’m a researcher in a Japanese pharmaceutical company during the daytime. In the evenings and on weekends, I practice the disciplines of etiquette, archery, and yabusame.

OGASAWARA We teach the arts of archery, yabusame, and reihō, or etiquette. In our practice, we teach the essence of etiquette, not simply what to do in a given situation. For these disciplines, students learn a variety of forms including standing, bowing, and walking, as well as drawing the bow and mounting the mokuba wooden horse for yabusame. We hold a training camp two or three times a year; it involves real horses and lasts several days.

We also organize training sessions on the day before and the day of yabusame festivals. We participate in approximately ten festivals across Japan, including those at Kamakura’s Tsurugaoka Hachimangū Shrine, Kyoto’s Shimogamo Shrine, Nikkō’s Tōshōgū Shrine, and Sumida Park in Tokyo’s Asakusa. We even teach the art of tying knots used for samurai armor, horsemanship, boxes, wrapping objects, and other situations.

INTERVIEWER Yabusame festivals certainly draw crowds, but how popular is the art in terms of studying?

OGASAWARA Right now we have roughly 700 students, of which about ten are foreigners from place like the United States, France, and Poland. Those from overseas are particularly interested in yabusame and the art of the bow.

The Fine Art of Samurai Manners

INTERVIEWER How would you describe your approach to teaching etiquette?

OGASAWARA It’s important to practice with a focus on how to use one’s body and practice mindfulness, the art of being aware of what one is doing at any given moment, and to use that for one’s approach to modern life while staying in harmony with one’s environment.

A tradition that lasts more than 800 years does not change. It’s not a question of changing the main teachings of the tradition which is the essence; we only change the minor details according to the times. The essence of our tradition is two texts, the Shūshinron and Taiyōron, compiled by my ancestors Sadamune and Tsuneoki. The former outlines how to govern the heart and mind, while the latter concerns the body. Preserving this essence for posterity is very important. 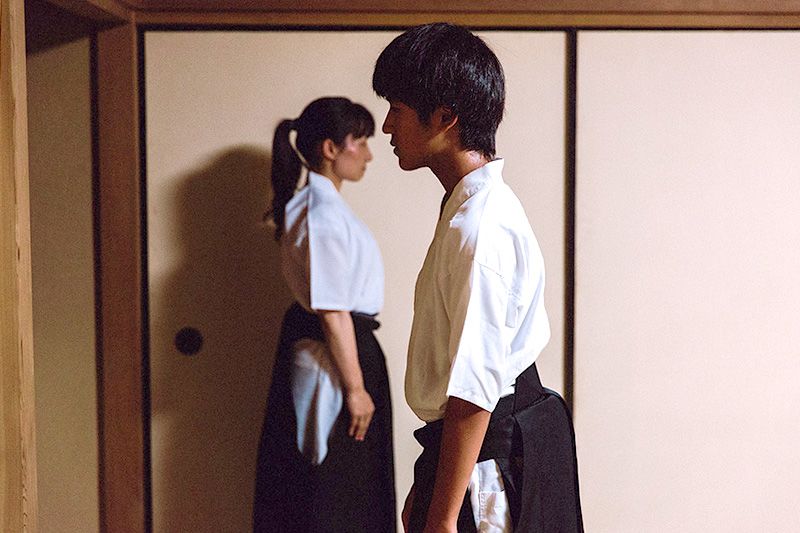 Students in the Ogasawara-ryū school practice standing and walking as part of etiquette training.

INTERVIEWER What would the samurai of old think of Japanese today and how they use their modern tools―smartphones instead of swords?

OGASAWARA The greatest difference is in how people think. For instance, the Bushidō virtues of justice, loyalty, and piety were strictly upheld in the past, unlike now. The concept of chūgi, or obedience, and kōkō or filial piety, were woven into the fabric of everyday life. But if we uphold those virtues, then people of yesteryear would be fine in today’s world even though all the nonessential tools of life, such as smartphones, have changed.

INTERVIEWER In terms of etiquette, foreigners generally see Japan as a polite society, full of time-honored customs like bowing. But what you teach goes far beyond that, doesn’t it?

OGASAWARA Etiquette in Japan today is taught according to the social situation: when you express appreciation or an apology to someone, for instance, you should bow deeply. This does not go into the essence, however, and that is the focus of our practice. We believe students should think about what to do in a given situation based on their knowledge of this essence.

The Ogasawara-ryū forms of etiquette were for the shōgun and those who met him. But moving one’s body according to one’s position in the social hierarchy also served as a means of defense against attack. After all, the higher one was in the hierarchy, the greater the chance of attack. For instance, through hand movements, one could easily observe the possibility of a sword being drawn and take precautions. That’s why they would, in observance of etiquette, naturally position their hands in such a manner that it would be impossible to quickly draw a sword, thereby assuring others they had no ill intent. But at the same time, they would assume a posture that would eliminate any delay in their response in the unlikely event that they would be attacked.

INTERVIEWER Is there a practical reason that your school observes such details of etiquette as how to open fusuma sliding doors?

OGASAWARA In terms of fusuma sliding doors, it’s important to learn the correct way to open them. That’s because they are one of the best tools to train one’s body in etiquette. This is part of the teaching that the foundation of etiquette is to correct one’s body―this means correct posture, movements, and actions, and doing the proper thing in the proper frame of mind according to the situation, time, and person with whom one is interacting. 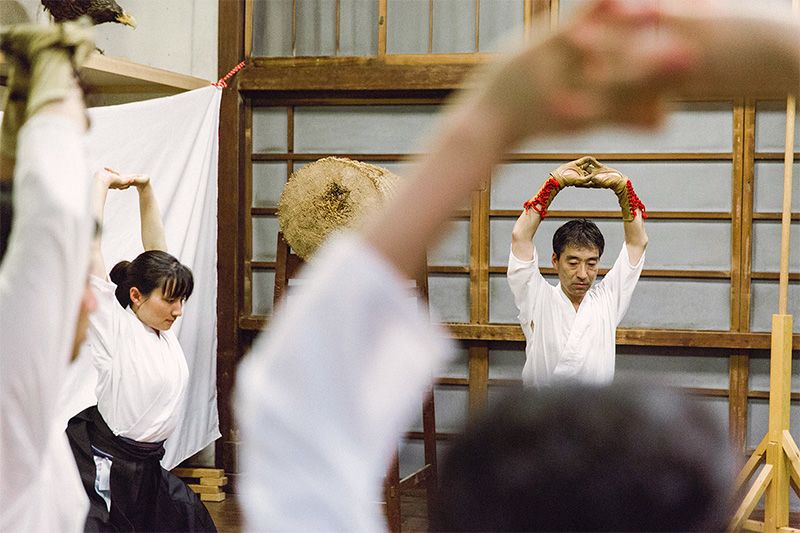 Ogasawara-ryū yabusame students limber up for a training session.

INTERVIEWER Would it be accurate to say that a common point between etiquette and yabusame is kata, the basic forms of each art?

OGASAWARA Well, kata is a term that can be easily misunderstood. Practicing kata does not mean just following the prescribed form and movement. While kata crystallize the experience and wisdom of past masters, the true meaning of practicing kata is to grasp the essence of form and movement and to make them your own. Naturally, you need to know the basics to learn a discipline. In yabusame, for example, one must train one’s leg muscles because considerable strength is required to be able to assume a stable posture by standing in the stirrups and not sitting on the saddle.

Similarly, in etiquette, postures such as seiza, or sitting on tatami mats with one’s legs folded under one’s body, also require leg strength. Actually, the samurai of old didn’t have to do muscle training or stretching because they did it as part of their everyday lives with their tatami lifestyle. Even to draw the bow or use a sword, samurai could use the muscles and arms that they developed every day, because they held objects differently compared to people nowadays, who no longer live on tatami mats. 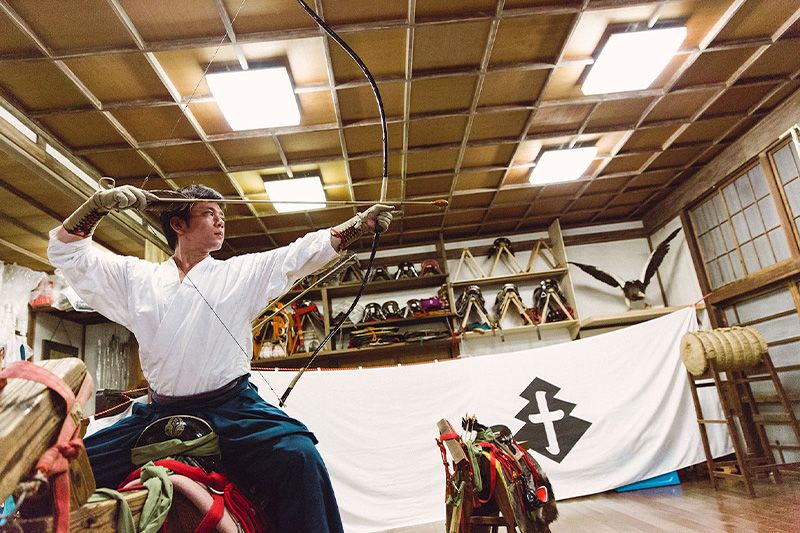 Ogasawara Kiyomoto stands astride a mokuba wooden horse during a yabusame class.

INTERVIEWER What is your message for readers in foreign countries who may be interested in traditional Japanese culture, yabusame, and etiquette?

OGASAWARA There are many diverse cultures in Japan based on different ways of thinking. I think that it’s better to immerse oneself in a culture and practice that match one’s own sensibility. Even if one can find copious amounts of information about a certain culture, that doesn’t necessarily mean it’s correct or proper, so I think people should be strict in identifying the essence of a culture in order to experience it.