Society Culture Jan 1, 2016
Kyūdō is a Japanese form of archery characterized by its long tradition as a martial art for training the mind and body.

From Battlefield Skill to Martial Art

Kyūdō is the Japanese martial art of archery. Once known as kyūjutsu, the archery of medieval hunting and war, over time it evolved into today’s “way of the bow.”

The aim of kyūdō is to train the mind and body through learning to focus on firing an arrow with the right ma’ai, or timing. But it is also practiced as a competitive sport; there are clubs both in and out of schools, and as with other martial arts, there are examinations for rising through successive dan, or ranks. Manga like Hirahira hyūn and video games are helping to make kyūdō popular among young people as well.

The earliest Japanese bow is believed to date from the Stone Age. Archery later became a prominent part of ceremonies held at the imperial court and among the samurai class. In the Kamakura period (1185–1333), horseback archery was practiced by warriors as mental and physical training. With the spread of firearms from the sixteenth century, however, bows were decreasingly deployed on the battlefield and archery came to be viewed as a martial art alone. In a list of 18 techniques that samurai in the Edo period (1603–1868) were expected to master, the bow was ranked first. 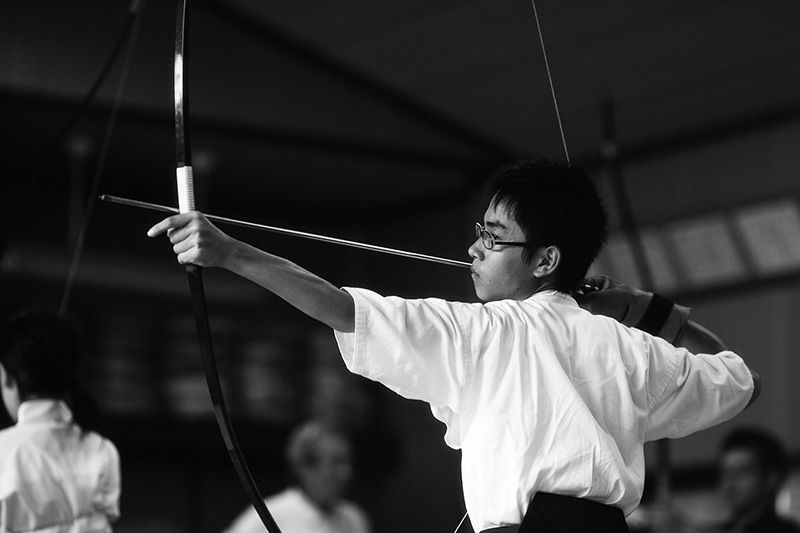 A scene from a school kyūdō club.

The shahō hassetsu are the eight stages of shooting an arrow, which are compared to eight joints on a bamboo pole.

The Longest Bows in the World

Kyūdō competitions are held over short and long distances. Short-distance competitions use targets that are 36 centimeters in diameter at a distance of 28 meters and are usually decided on the number of hits. In the long-distance events, archers aim at 100-centimeter targets that are 60 meters away, and scoring is based on how close the arrows are to the center of the targets. According to kyūdō teachings, by maintaining balance through the correct movements and respecting the proper forms, the archer ensures that the arrow will naturally strike the target. The artistic dimension is achieved by following practices defined by schools, such as the Ogasawara-ryū or the Heki-ryū, and through the basic movements and principles of shooting.

Practitioners traditionally wear a white short-sleeved kimono, a black hakama (loose, skirt-like pants), and white tabi socks. A leather glove protects the hand holding the bowstring; women may also wear a chest protector. As of March 2014, there are almost 140,000 people practicing kyūdō in Japan as members of the All Nippon Kyūdō Federation, of which just under half are women.

The wakyū, or Japanese bow, measures around 221 centimeters, meaning it is longer than the bows used in Western archery, which are about 160 centimeters. In fact, Japanese bows are the longest in the world. They are asymmetrical and held below the midpoint, and there are no joints from the top to the bottom of the bow.

Today, three main types of bow are used. First, there is the traditional takeyumi, with a core of bamboo and wood covered with bamboo facings. The second variety has a carbon fiber core covered with bamboo facings. The third kind of bow is entirely made of carbon or glass fiber and is particularly suited to beginners and students, as it is easy to produce, cheap, and requires little maintenance.

Archers at Sanjūsangendō temple in Kyoto. A competition is held around Coming of Age Day in January each year with many people who have just turned 20 taking part.

Yabusame is famous as both a horseback archery competition and a religious ritual. Spectators can enjoy viewing the archers wielding huge bows to fire arrows at multiple targets from the backs of horses at full gallop, giving onlookers the sense that they have traveled back in time to the feudal era. Yabusame competitions take place all over Japan in spring and autumn, including famous events at Tōshōgū in Nikkō, Tochigi Prefecture; Tsurugaoka Hachimangū in Kamakura, Kanagawa Prefecture; Sumida Park in Asakusa, Tokyo; and Shimogamo Shrine in Kyoto.