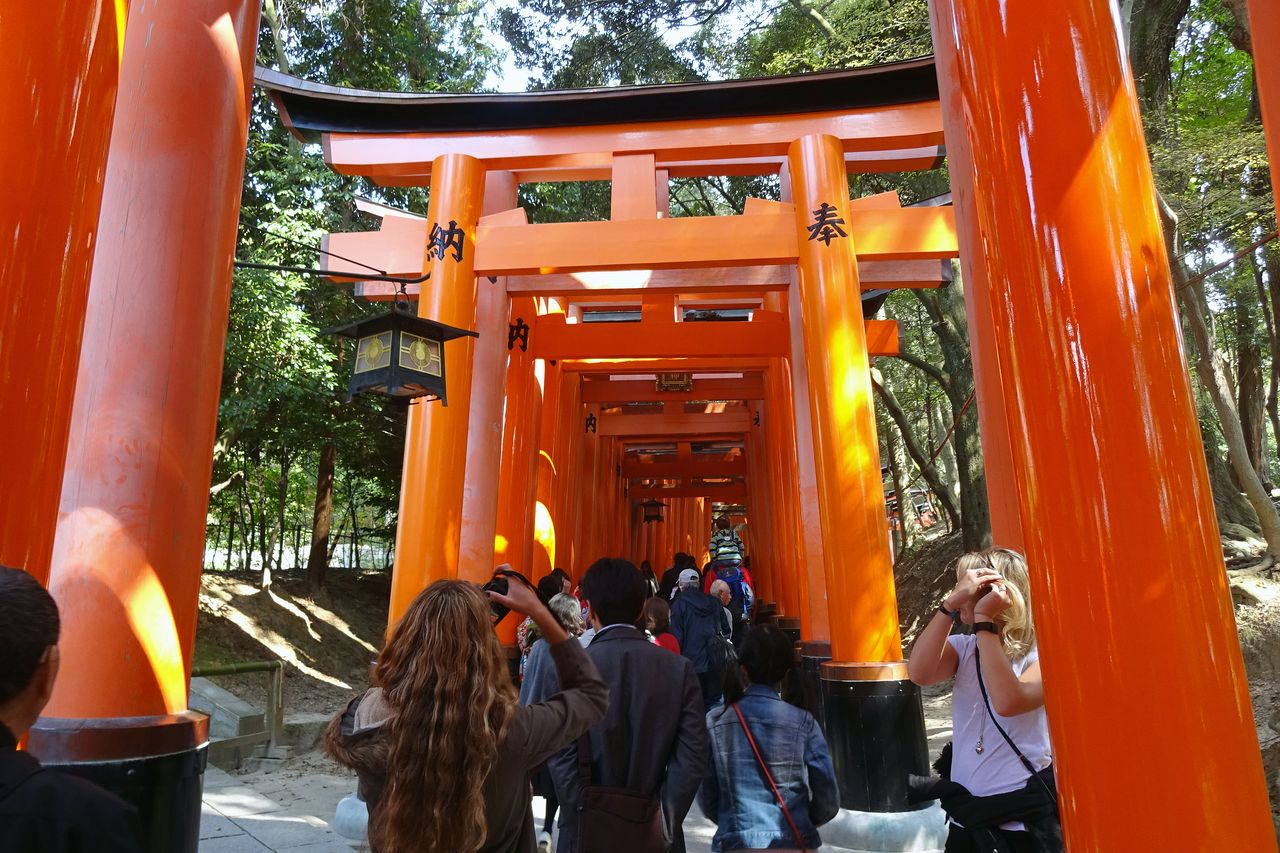 Foreign Travelers Discovering Their Own Sightseeing Spots in Japan

Travel Culture Feb 20, 2019
Foreign tourists are flocking to Japan in ever greater numbers, but not all are sticking to standard tourism routes. Shibuya’s scramble crossing and Shinkansen cleaning crews have become unexpected draws for visitors from overseas.

Japan is in the middle of an unprecedented tourism boom. Foreign tourists taking advantage of factors like a weaker yen and relaxed visa requirements are coming in droves for shopping, dining, and sightseeing, with the number of travelers soaring from 8.35 million in 2012 to a record-setting 31.2 million in 2018.

Overseas visitors typically head for popular landmarks. Increasingly, though, travelers are venturing off standard routes and relying on their own curiosities and expectations to discover sites, many of which Japanese would not even think had tourism appeal. Subsequently, a growing list of nonconventional locales have appeared alongside stops on traditional travel itineraries.

Kyoto’s scenic beauty makes it one of Japan’s top sightseeing destinations. Visitors can spend days touring famous spots like Kinkakuji and Kiyomizudera and still only brush the surface of what the ancient capital offers. However, many in Japan were recently left scratching their heads when the Fushimi Inari Shrine, a relative tourism backwater in the south of the city, emerged as the top attraction on a list of popular spots for overseas visitors.

The ancient shrine sets in a corner of Kyoto far removed from bustling tourism centers. It traditionally attracted visitors for events like hatsumōde, the first prayer of the New Year, but was not even among Kyoto’s top-30 sightseeing spots. Several years ago, though, local shop owners began noticing a curious uptick in foreign tourists to the area. Around 2010, the trickle became a deluge, and in 2013 the shrine garnered national attention when it ranked second on a survey of favorite tourist destinations of foreign visitors published by the Japanese version of the travel site TripAdvisor. The following year it climbed to number one, where it has remained. Media outlets pounced on the story of the shrine’s surprising rise to fame, arousing the curiosity of Japanese travelers and turning the site into a new Kyoto hotspot.

By some accounts, the Fushimi Inari Shrine owes its international appeal to the hit manga and anime series Naruto. The widely translated work tells the story of a young ninja who harbors the spirit of a monstrous nine-tailed fox. Initially, foreign fans of the series were drawn by the fox connection—the shrine heads the network of some 30,000 shrines nationwide dedicated to the fertility god Inari, whose messenger is a fox. Pictures of the shrine’s tunnel of vermillion torii gates—some 10,000 in number—then made a splash on social media, luring even more travelers to the spot.

Along with the red gates, the steep path leading to the main hall offers panoramic views of Kyoto and its surrounding hills. Until recently, though, Japanese tourists were largely ambivalent about the vista and only a smattering veered from established routes to make the hour-long hike up the mountain. However, hordes of foreign travelers have been drawn by the perceived “Japaneseness” of the scenery, illustrating a stark difference in the preferences of domestic travelers and those from abroad. 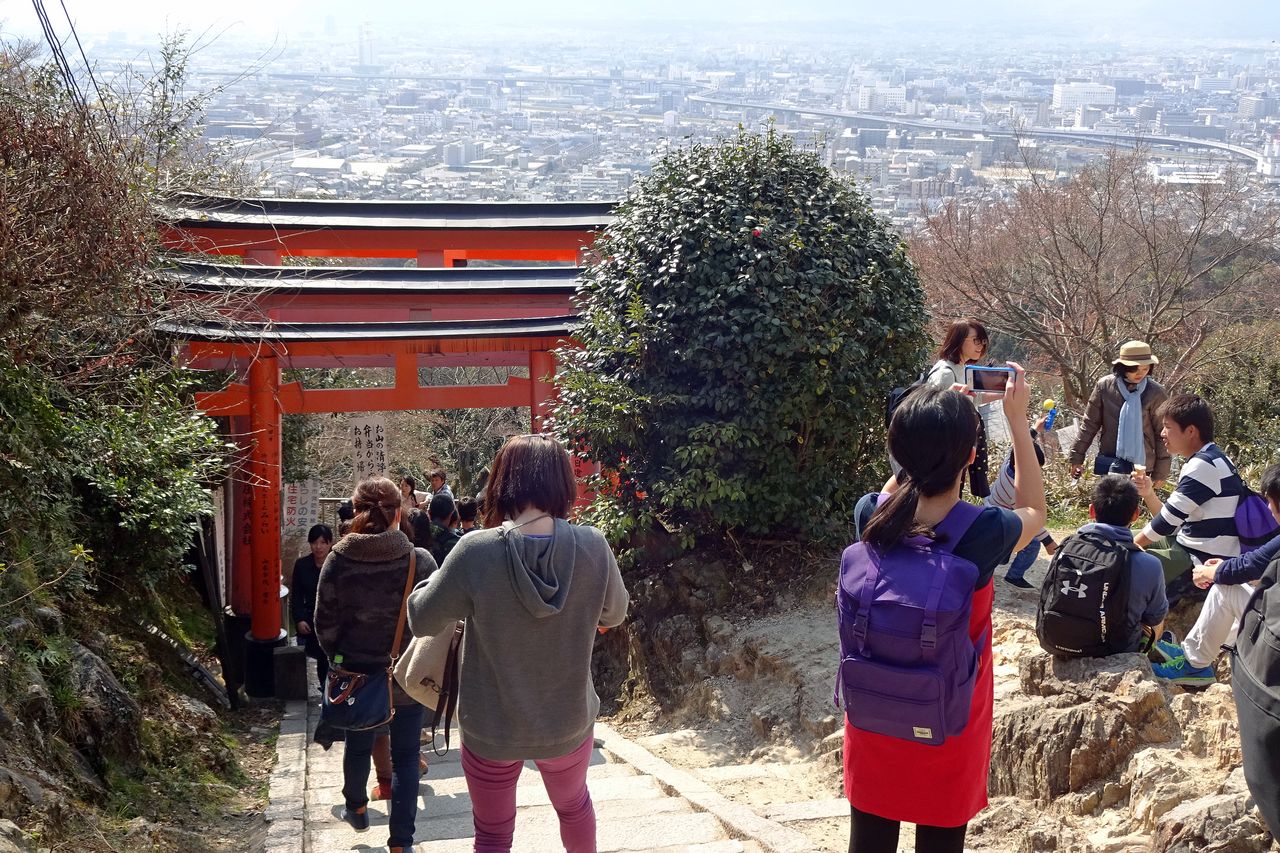 The path to the Fushimi Inari Shrine offers an unobstructed view of Kyoto and surrounding hills.

Another site foreign visitors have recently “discovered” is the iconic scramble crossing outside Shibuya Station in Tokyo. During the busiest times of day, some 3,000 pedestrians spill onto the overlapping crosswalks with each light change, producing a seemingly chaotic muddle of foot traffic that miraculously dissipates just as the crossing signal turns red. 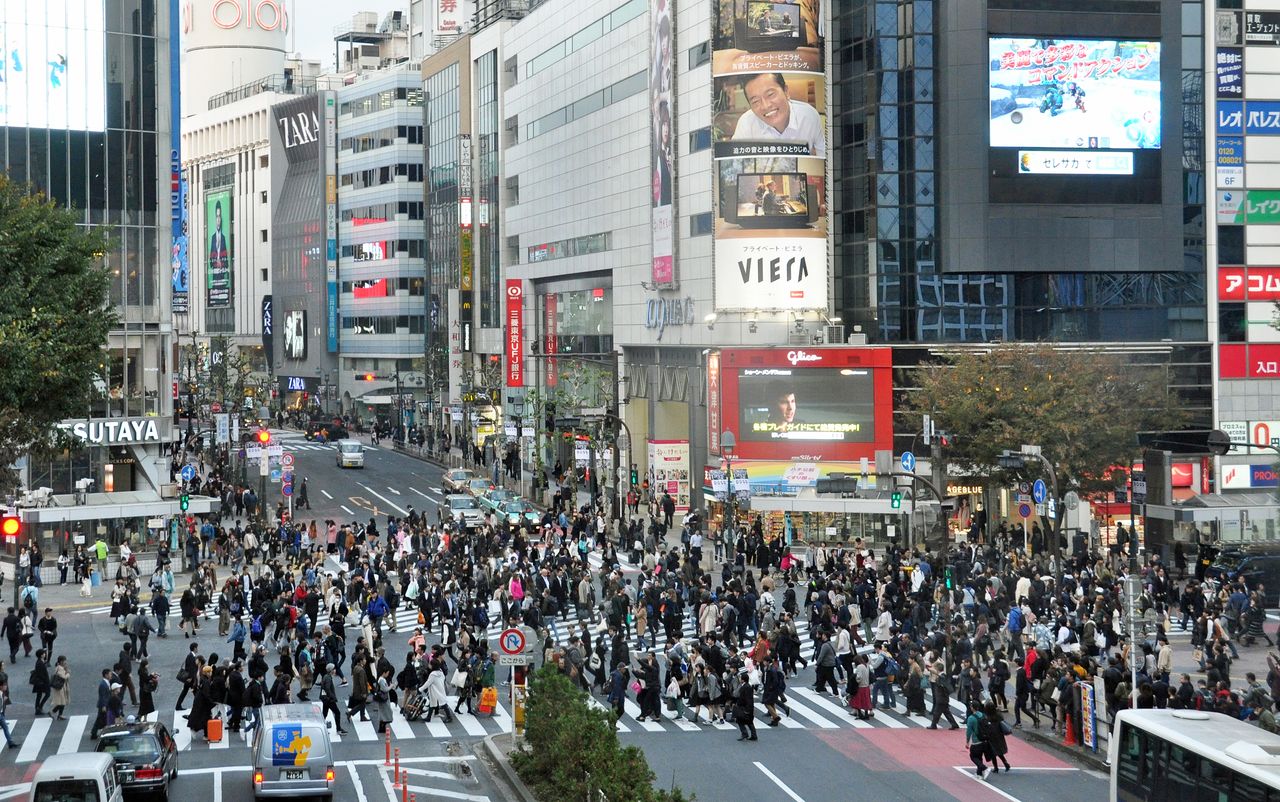 I have personally made the crossing hundreds of times and it has never struck me as especially tourism-worthy. However, many visitors from overseas find the spectacle riveting, particularly how such a massive jumble of people converge without incident. I have seen many overseas visitors—and a fair number of Japanese too—stop in the road to snap selfies among the confusion. A handful of foreign tourists can also usually be found gazing out at the tumult of pedestrians from the passageway connecting the JR Yamanote and Keiō Inokashira Lines, which offers an unobstructed view of the crossing.

Another burgeoning draw for foreign tourists is the Tōhoku, Jōetsu, and Hokuriku Shinkansen platforms at Tokyo Station, where uniformed cleaning staff with choreographed exactness tidy the interior of arriving trains. The display is deemed by some as the “seven-minute miracle” for the length of time it takes a team to clean and prep the high-speed trains for departure.

Japan prides itself on the reliability of its Shinkansen fleet, and the mode of cleaning carriages developed as a way to keep trains running like clockwork. The one-of-a-kind spectacle begins with staff, heads bowed, facing the bullet train as it slides into the station. Once the doors open, team members collect garbage from departing passengers and then get to work meticulously cleaning their way through the train—one crew member per carriage—picking up refuse, wiping tray tables, changing headrest covers, and cleaning under seats.

During peak times staff must prep as many as 10 trains per hour—these can range in length from 7 to 17 carriages, including multiple double-decker cars—requiring crews to clean at lighting speed and then stealthily move between crowded platforms, awing visitors from abroad with their precision, etiquette, and finesse in the process. 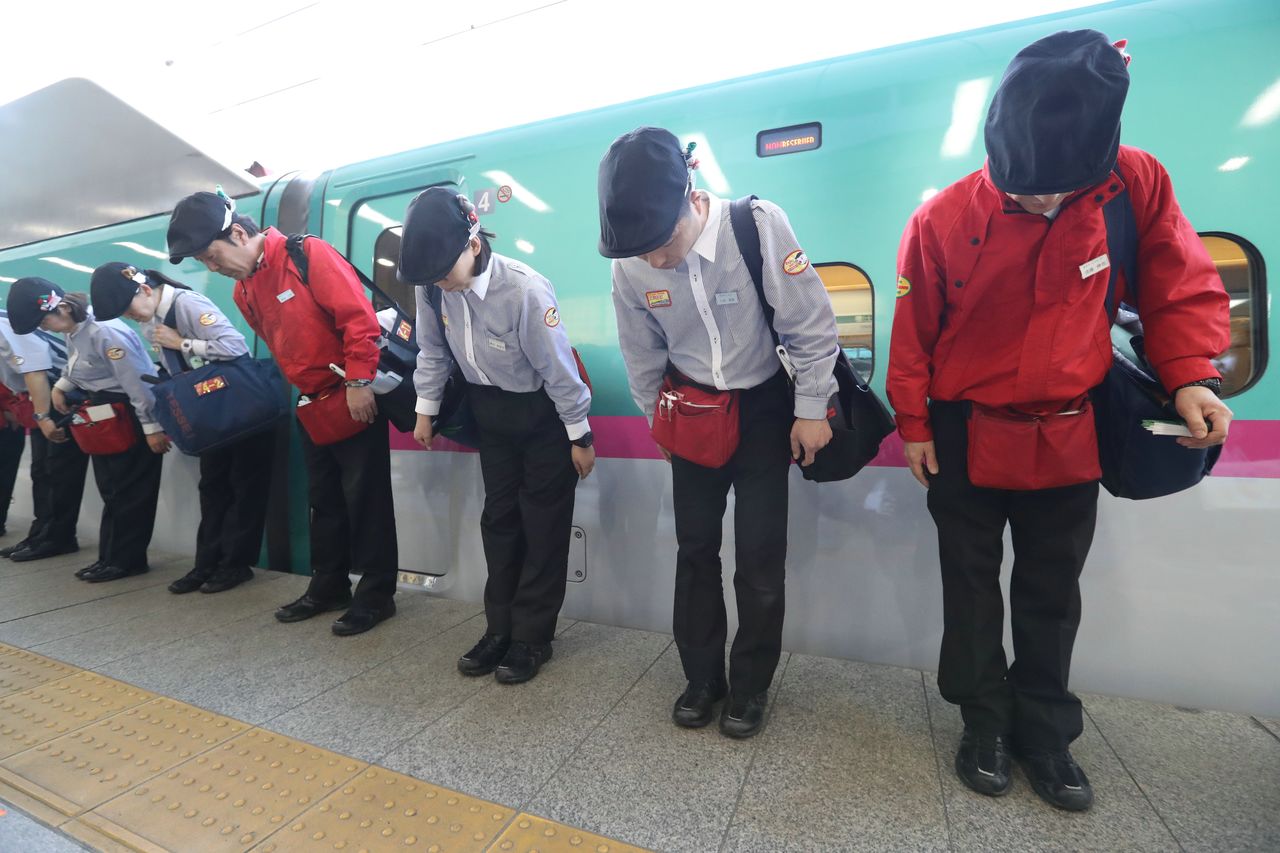 Shinkansen cleaning staff bow after tidying up a train. (© Jiji)

One place where Japanese and foreign aesthetics starkly clash is at the Arakura Fuji Sengen Shrine in Yamanashi Prefecture. Visitors to the nondescript shrine can enjoy a close-up view of snowcapped Mount Fuji along with a red five-story pagoda like those found at temples in Kyoto and Nara. As a Japanese person, though, I find both symbols crammed together extremely tacky. Come spring, blossoming cherry trees add another befuddling layer of banality to the mix. But instead of being put off by the discord, overseas tourists revel in the scenery, carefully preserving it in countless snapshots. 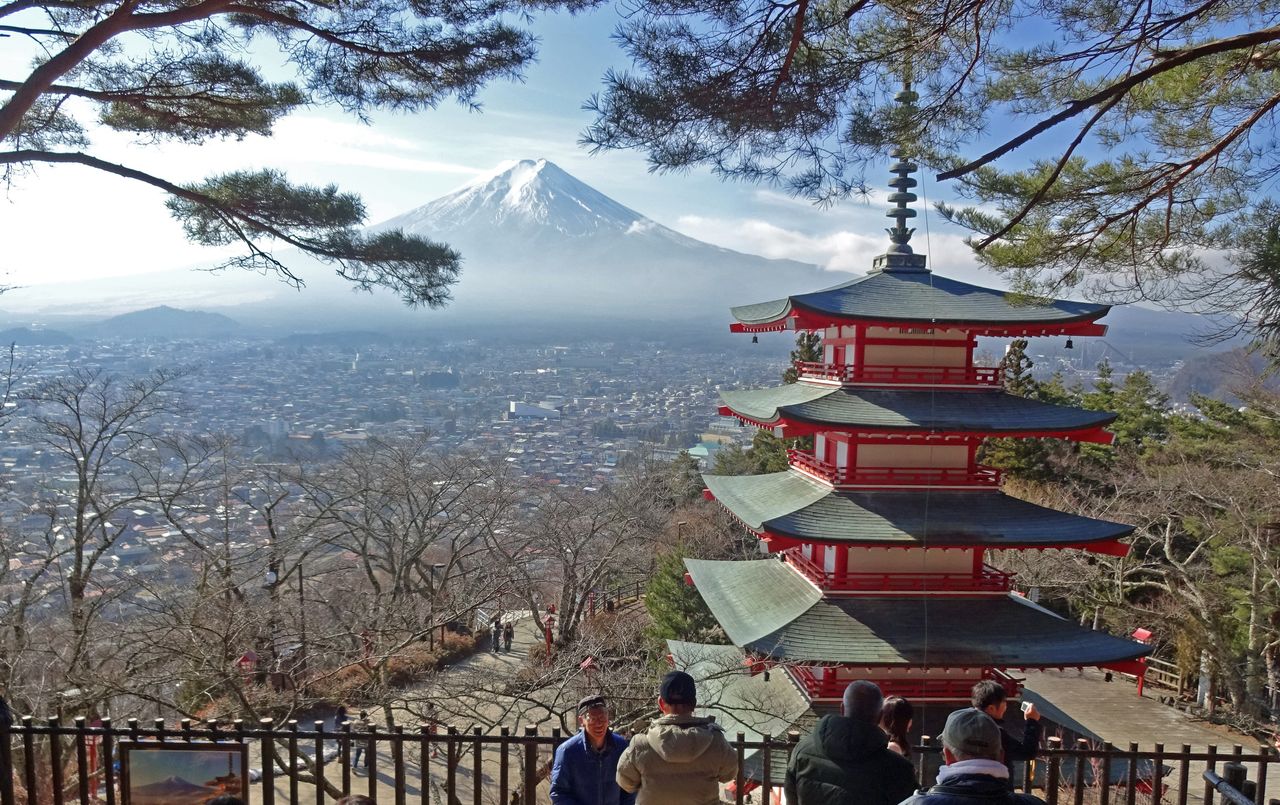 Two Japanese symbols in one shot.

Until around five years ago the shrine saw few visitors beyond local residents, but quickly gained acclaim abroad when photos claiming to combine Mount Fuji and Kyoto together went viral on social media in Thailand. It is now lauded by many foreign travelers as a quintessentially “Japanese” spot and has even begun to attract some domestic foot traffic.

Above are just a few examples of the difficulty Japanese have in gauging what foreign tourists will find interesting. Growing up in Japan, it is easy to assume that aspects that native residents find appealing about their country will have the same draw for visitors from abroad, but often expectations and perspectives differ greatly. The discord between what Japanese want to show off and what foreigners want to see is not a new phenomenon, having been going on in one form or another since Japan first opened its doors to the world more than 150 years ago.

During the Meiji era (1868–1912) Japan dramatically transformed from a feudal country to a modern state. Japanese leaders were keen to show foreign visitors the fruits of their labors, such as facilities like factories and museums, to demonstrate that Japan was quickly catching up with the West in industry and science. By presenting Japan as a rising power, the government hoped to build leverage toward overturning the unequal treaties it had been forced to accept when the nation first opened.

Historical buildings served a similar purpose. When General Ulysses S. Grant visited in 1879, his Japanese hosts made sure to take him to see the Tōshōgū Shrine in Nikkō. The purpose of the excursion was not so the former US president could admire the stunning artwork of the mausoleum of Tokugawa Ieyasu, the first shōgun of the Edo era, but to impress on him that the new, modern government had toppled the old feudal regime responsible for building the sprawling architectural wonder.

There are countless motives for attracting tourists to an area, ranging from local pride to economic gain. However, tourism strategies tend to be myopic in emphasizing the most obvious and acclaimed aspect of areas. This narrow view limits visitors’ experiences and hinders their ability to explore and unearth new attractions. There remains much to be discovered in Japan, and it will be tourists who shun the advice of travel brochures who will find the next diamonds in the rough.

(Originally published in Japanese. Banner photo: A tunnel of torii gates at Kyoto’s Fushimi Inari Shrine. All photos by the author, unless otherwise noted.)