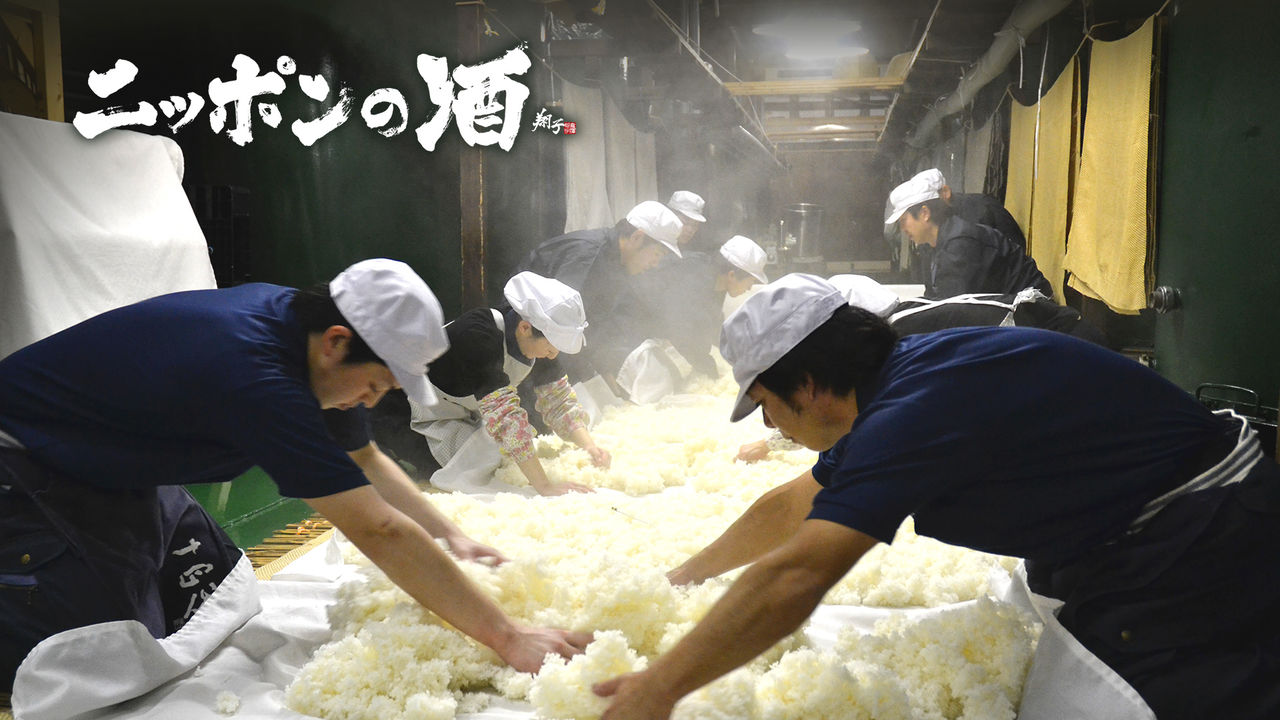 Culture Apr 10, 2018
Sake authority Sandō Atsuko explains the complex sake-brewing process that has developed over the centuries and the way it has interacted with the local factors to produce a rich variety of subtle flavors and aromas.

Japan’s temperate climate, abundance of clear, fresh running water, and long tradition of meticulous and sophisticated craftsmanship come together in the production of the country’s iconic tipple nihonshu—or sake as it is known in the West. Understanding how those factors have interacted in regions and locales around Japan can greatly enrich one’s appreciation of sake in all its subtlety and variety. But before diving into the how of sake, we need to familiarize ourselves with the what, where, and when.

Let’s begin with the basics.

The alcohol content of most types of sake is somewhere between 14% and 17%, though some fall in the 5%–8% range. This makes it a bit stronger on average than wine, which is generally between 7% and 14% alcohol. Although typically clear and almost colorless, sake is not in the same category as white distilled spirits—such as gin, vodka, or the Chinese baijiu—which generally have an alcohol content of at least 40% and sometimes as much as 75%.

As noted above, the basic ingredients of sake are rice, rice kōji, and water. The term junmai (“pure rice”) indicates that nothing else is added. Other types of nihonshu contain small amounts of pure distilled alcohol as well.

However, this brief list of ingredients belies the complexity of the sake-making process. The flowcharts below allow a simple comparison between the process of sake brewing and that of wine making. 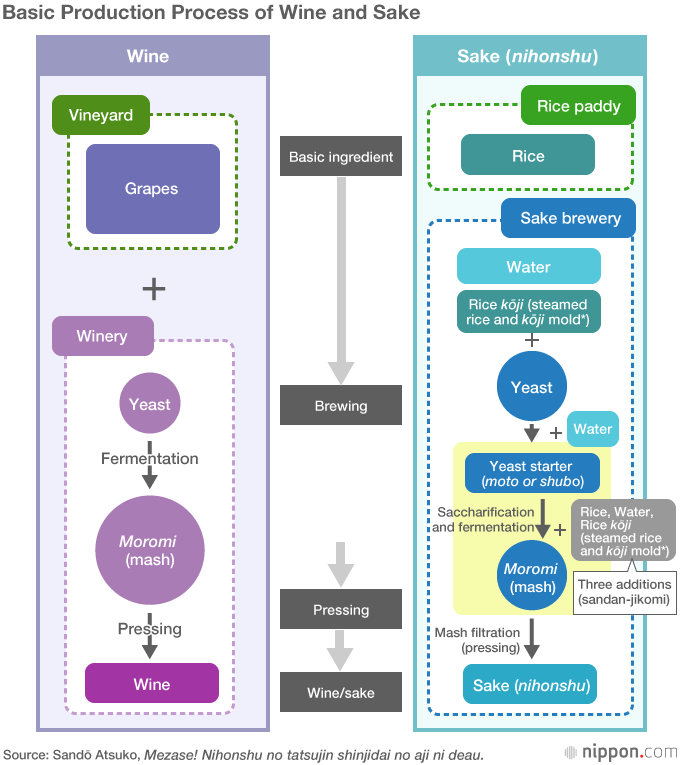 As the above comparison suggests, sake involves a much more complicated and time-consuming brewing process than does wine. The grapes from which wine is made are full of sugars on which yeast can act directly to produce alcohol—a process known as simple fermentation. Rice, on the other hand, consists mainly of starch, which must be broken down into sugar before the yeast can convert it to alcohol.

For this purpose, Japan’s sake brewers summon the power of another microorganism, a type of mold known as kōji-kin.* Once the enzymes from the kōji (mold culture) begin breaking the starch down into sugar (saccharification), a yeast starter can be added to start the fermentation process. The saccharification continues, allowing further fermentation in a process referred to as “multiple parallel fermentation.” 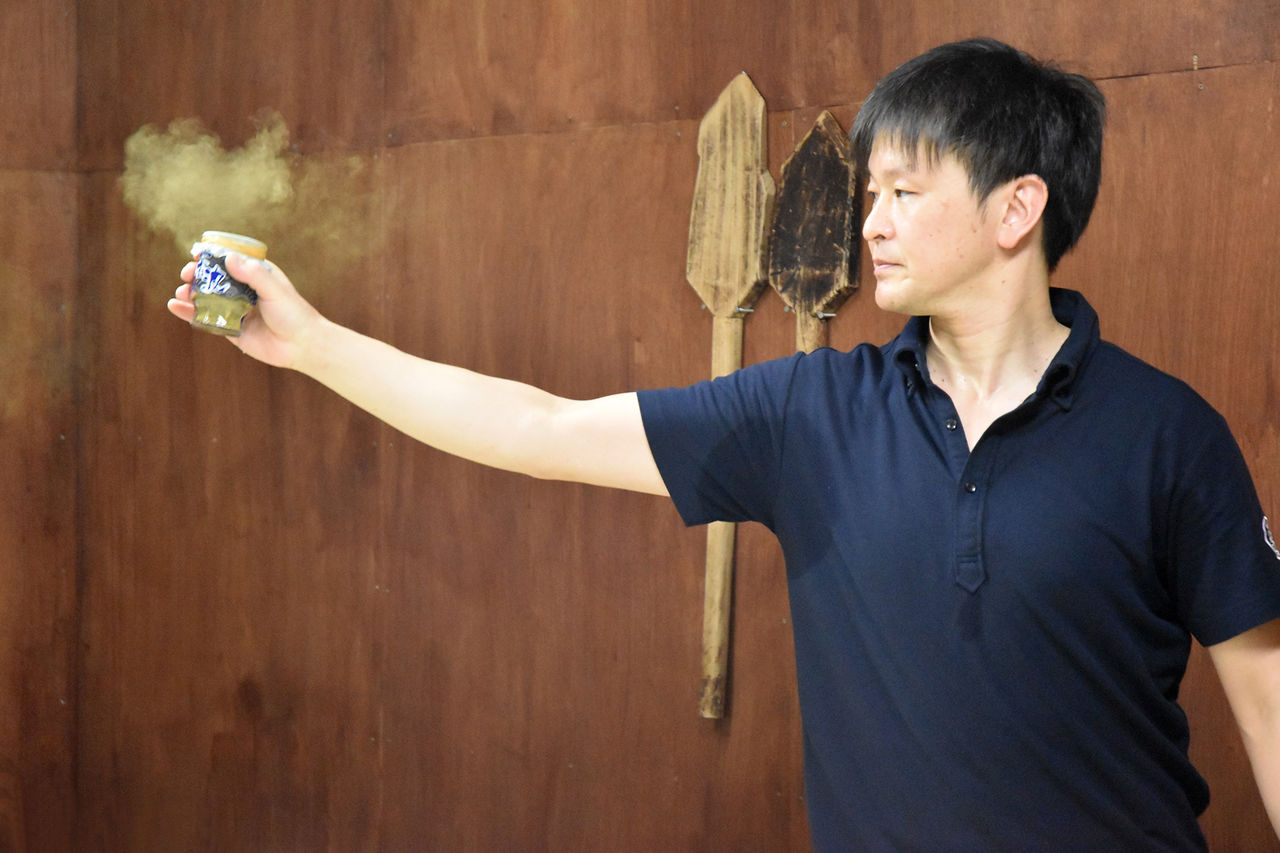 In a special temperature-controlled room, a brewmaster for Wakanami Shuzō brewery (Fukuoka Prefecture) sprinkles kōji-kin spores on steamed rice to make rice kōji, a crucial ingredient in sake brewing. The kōji will be laboriously hand-tended over the next 48–72 hours to maintain temperature and humidity at the optimum levels.

*Kōji-kin is a special fungus (mold) used in the production of a number of quintessentially Japanese seasonings and food products, including soy sauce and miso as well as sake. It is one source of the deep and complex umami (roughly, savoriness) for which those products are known. Although similar molds have traditionally been used for fermentation purposes elsewhere in Asia, kōji-kin itself is viewed by many in Japan as uniquely Japanese. In 2006, the Brewing Society of Japan named kōji-kin Japan’s “national fungus” because of its importance to Japan’s traditional food and beverage culture.

Because wine making relies on a simple one-step fermentation process, the character and quality of the grape has a direct and unmistakable impact on the taste of the final product. Although the rice used for sake brewing is certainly a factor, differences in taste and aroma are determined more by the technical know-how of the brewers, from the cultivation of kōji and yeast starter to the complex and intricately timed brewing process.

But the local environment also plays an important role. Water resources are particularly crucial, since a large quantity of water is used in the sake-making process. (Sake is about 70% water.) The mineral content of the water, along with climate and other aspects of the local environment, have given rise to different “schools” of sake brewing. Such variables help account for the great diversity that makes sake tasting such an endlessly rewarding pursuit.

(Originally published in Japanese. Banner photo: Freshly steamed rice is spread out on a cloth in a cold room to bring the temperature down quickly at Takagi Shuzō brewery, maker of the legendary Jūyondai. All photos by Sandō Atsuko. Series banner image by calligrapher Kanazawa Shōko)