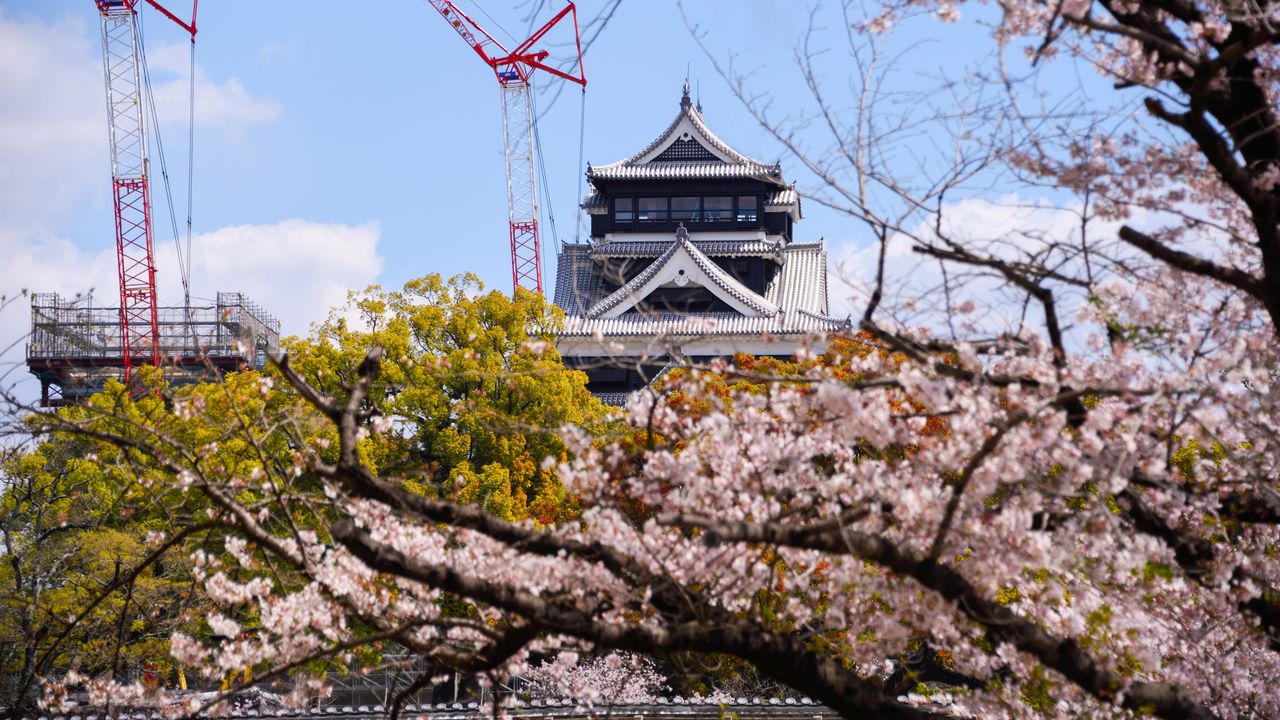 Travel Disaster Apr 22, 2019
Kumamoto Castle, under restoration since the 2016 quake, opened for cherry-blossom viewing in April.

Cherry Blossoms for a Limited Time

Kumamoto Castle was originally built in 1607 by Katō Kiyomasa (1562–1611), a warlord who acquired a reputation for his castle construction efforts. Considered one of the three great Japanese castles, Kumamoto Castle is also known for the approximately 800 cherry trees on its grounds, which make it a prime blossom-viewing site in spring. Just as in most years, the cherry blossoms began blooming in late March 2019, and came into full bloom in early April. The castle grounds, where restoration has been underway since the 2016 Kumamoto earthquakes damaged the structures, were bathed in springtime colors.

Since the quakes, access has been restricted to Miyukizaka slope, a top blossom-viewing site near the entryway to the castle. During sakura season, however, days are set aside when the area is opened to the public again, and on these dates the cherry trees lining the path are surrounded by crowds of people who come to see the blossoms. Families spread tarps on the ground at Ninomaru Park and savor their bentō box lunches and the cherry blossoms, enveloped in an atmosphere of tranquility. 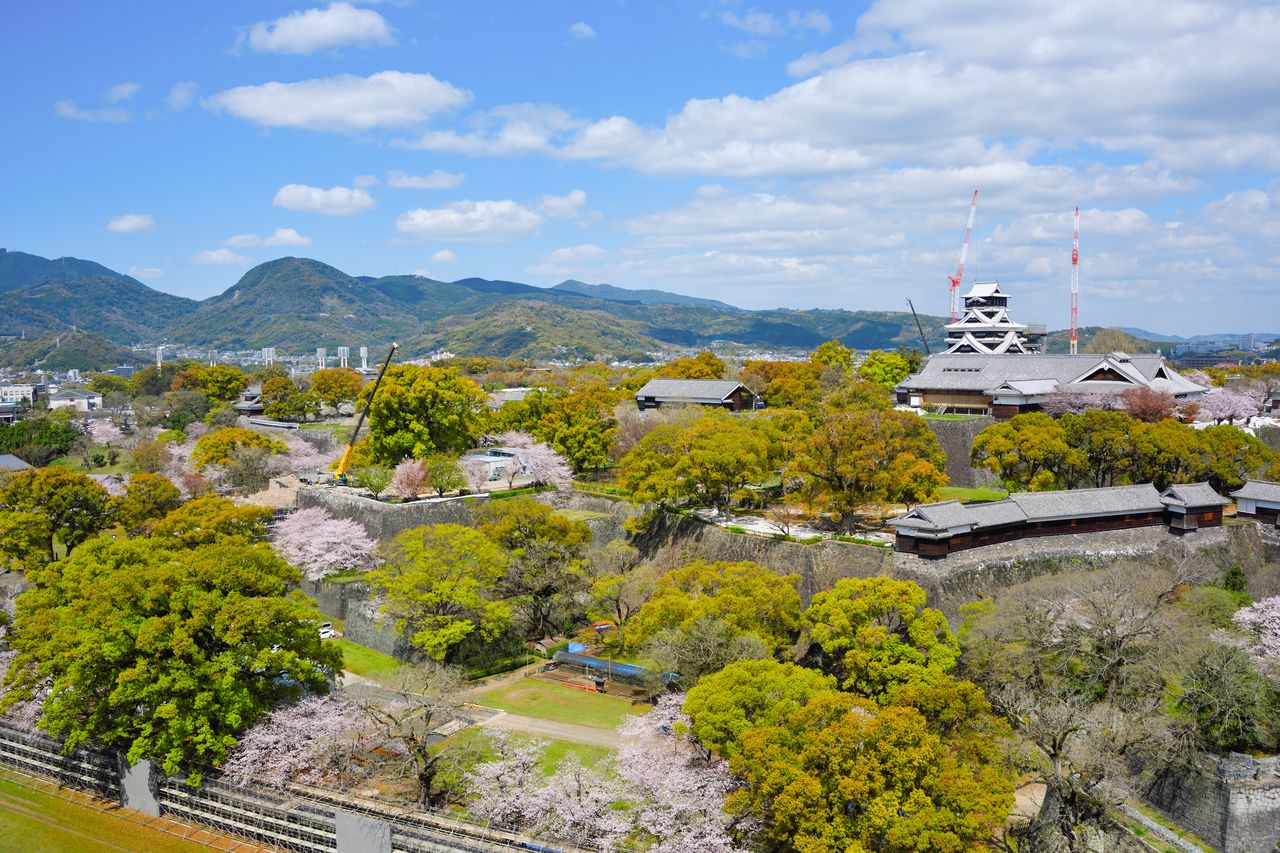 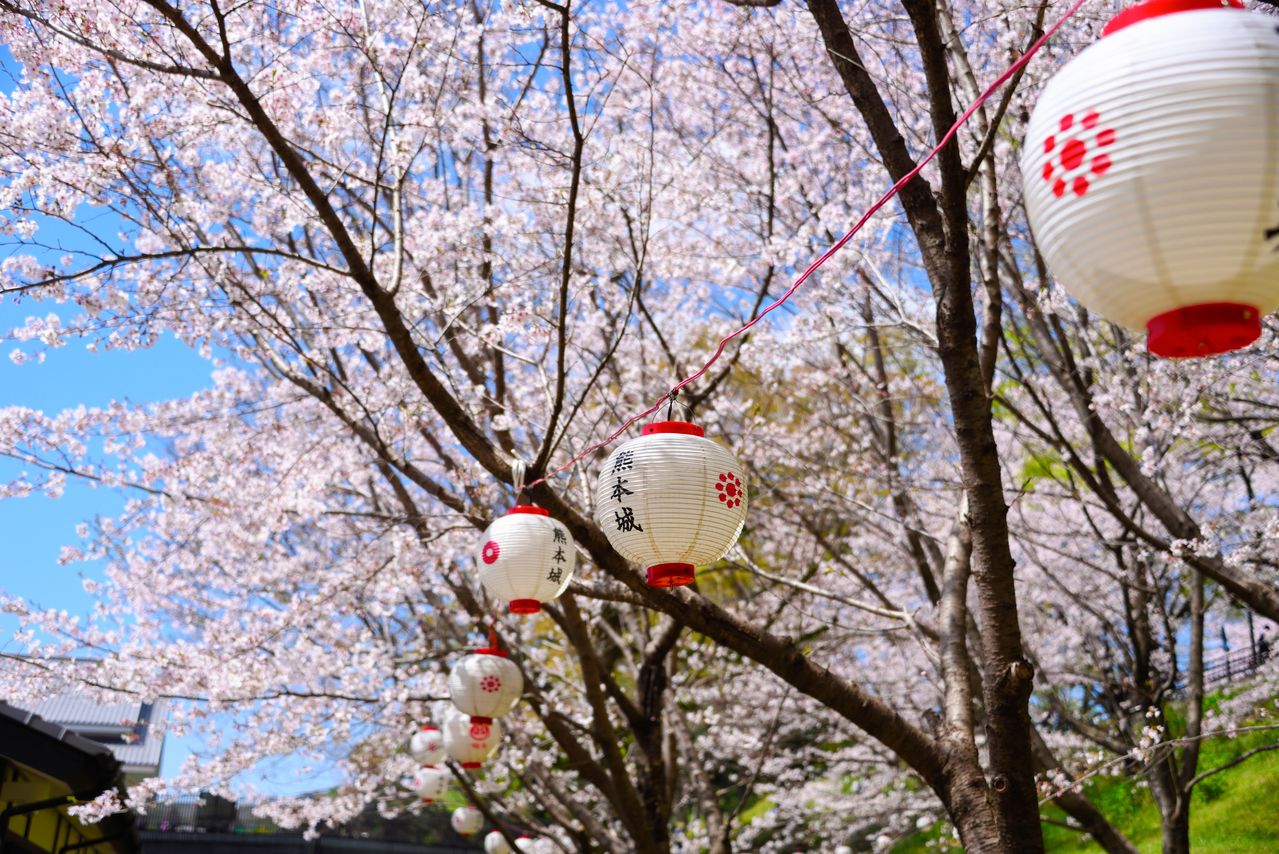 Some 800 somei yoshino and other cherry trees in full bloom. 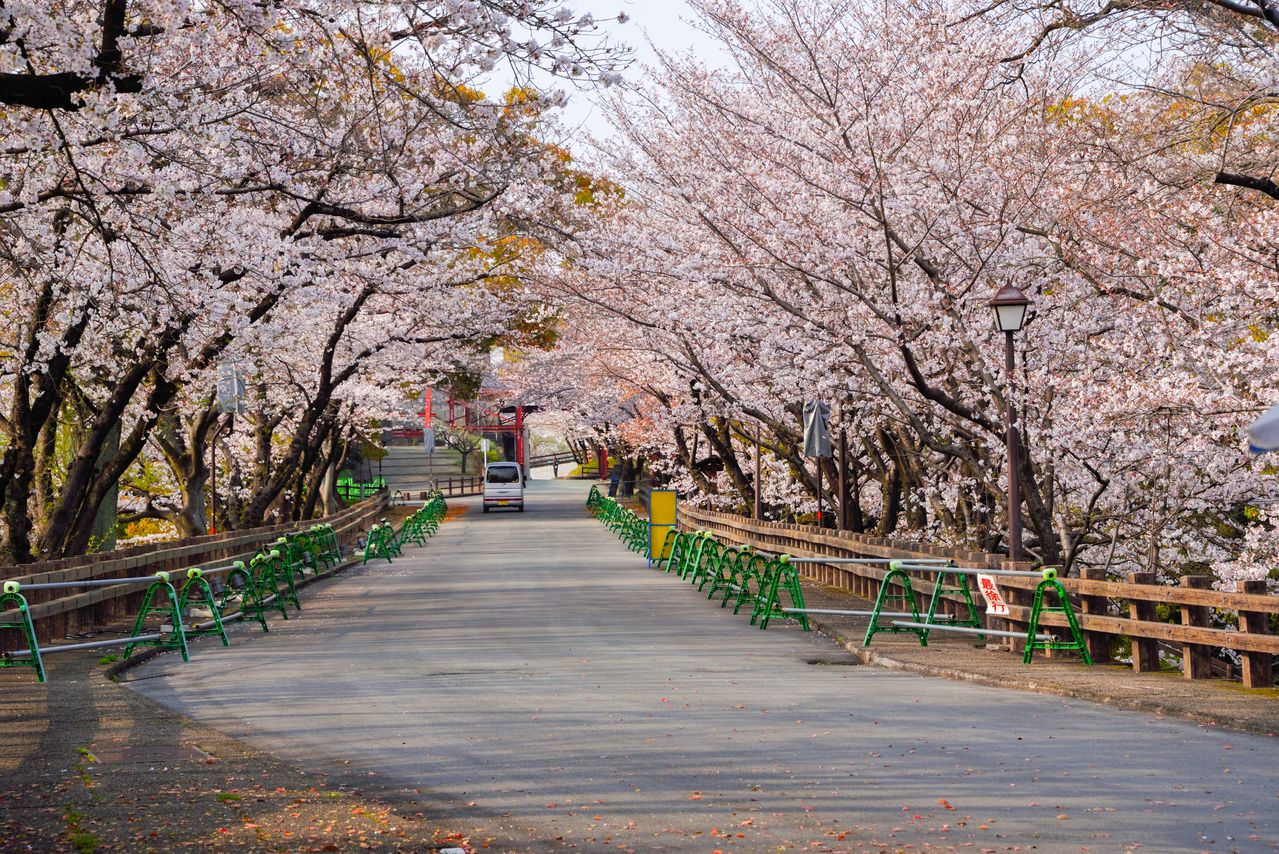 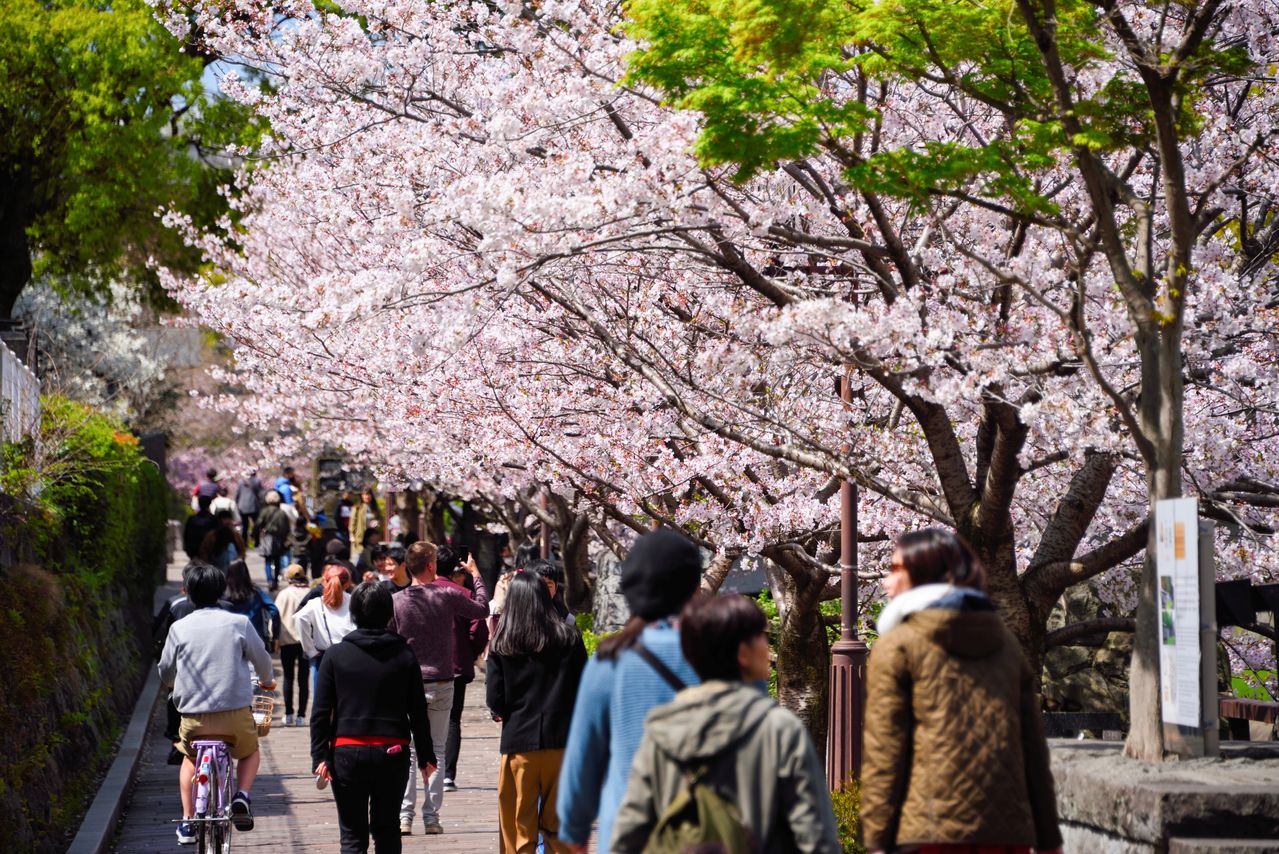 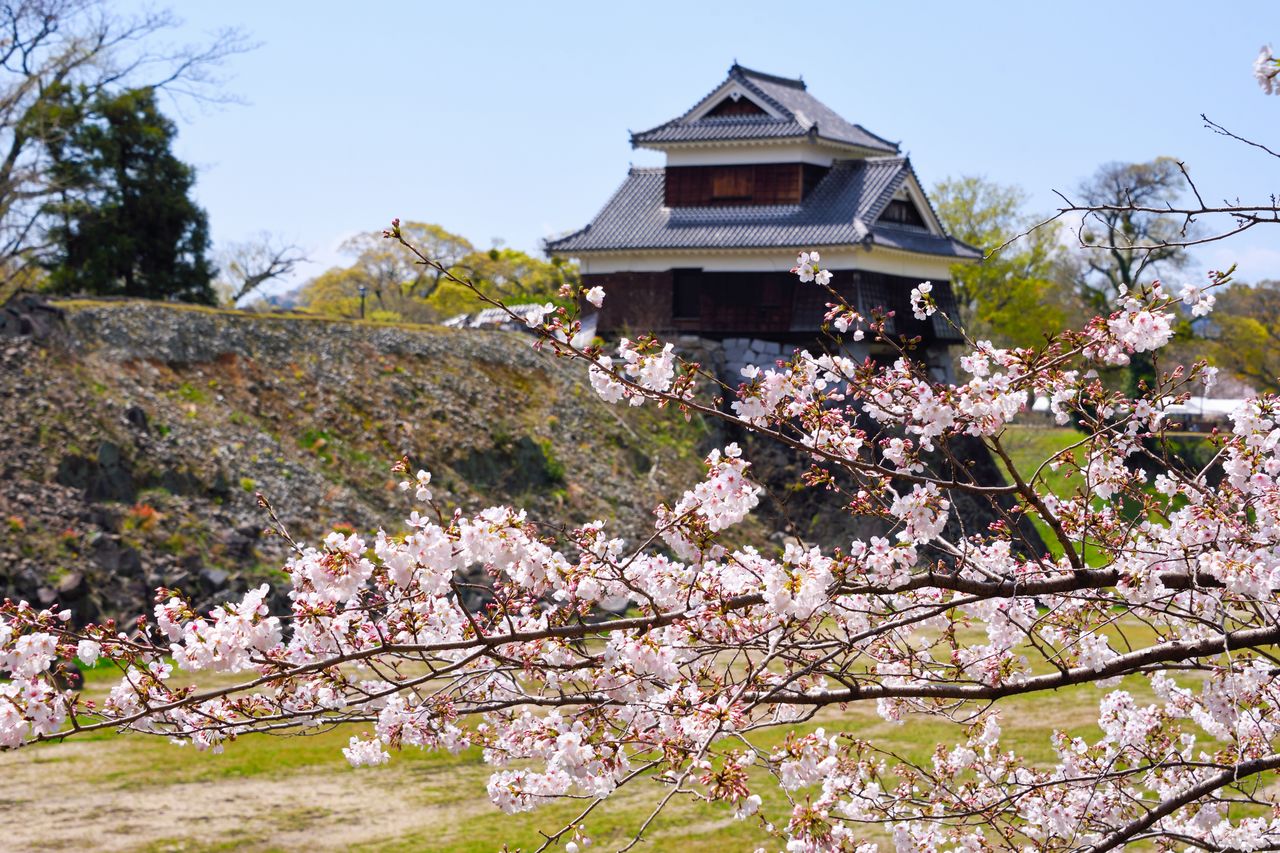 Beautiful blossoms on display near a collapsed rock wall of Kumamoto Castle.

One significant difference in blossom-viewing at Kumamoto Castle between this year and 2018 is the removal of the upper part of the scaffolding that had encased the castle’s main donjon. This development allowed the whiteness of the replaced tiles and mortar on the roof of this structure to show through, set off to good effect by the pale pink of the blossoms. Also restored are the two sculptures of shachihoko (a mythical fish with a lionlike head, sharp dragon scales along its back, and an arched tail pointing upward) which constitute the topmost part of the main donjon structure. They were installed on April 28, 2018, some two years after the quake, just as that year’s cherry blossom season came to an end. Thus, this year’s sakura season was the first to be marked by the presence of these new shachihoko sculptures. 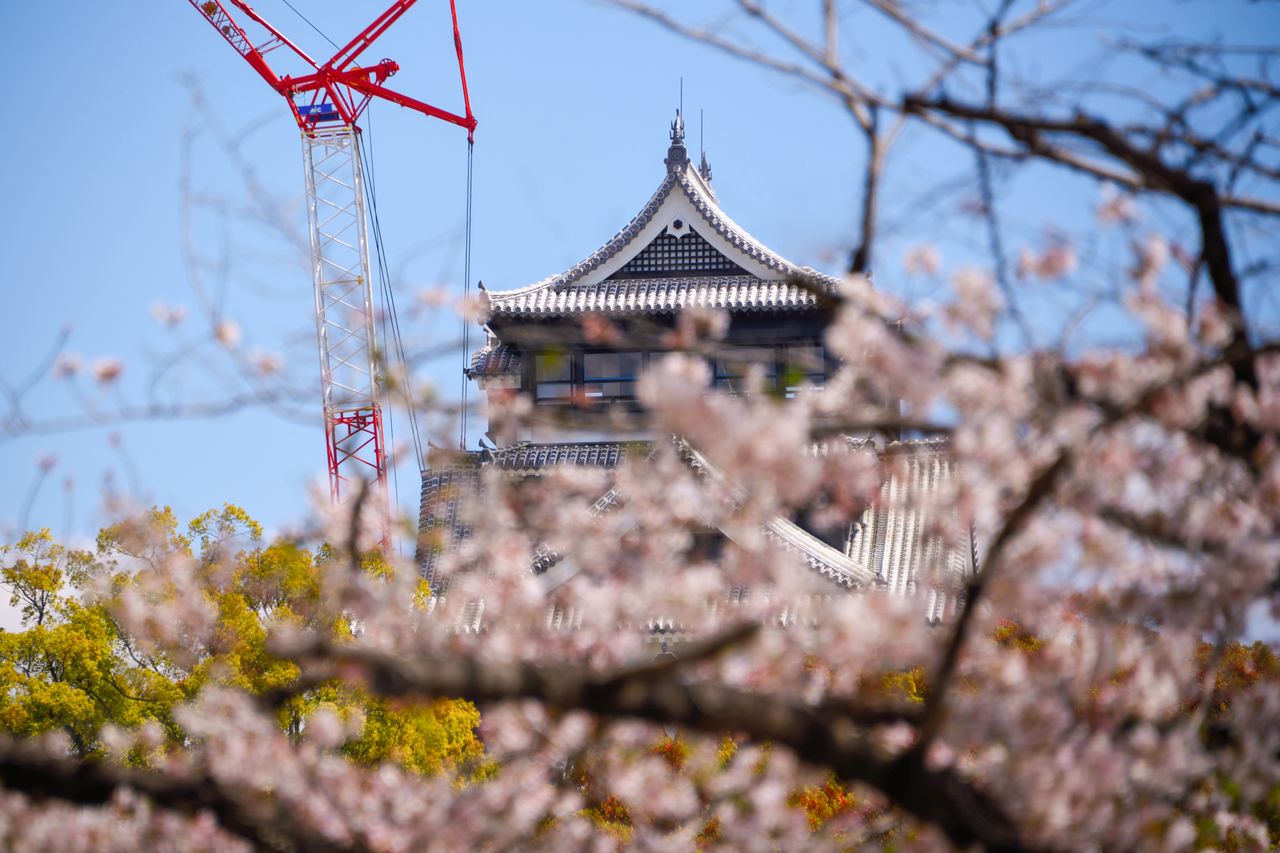 The new shachihoko sculptures atop the main donjon. The brand-new roof tiles and mortar are set off by cherry blossoms. 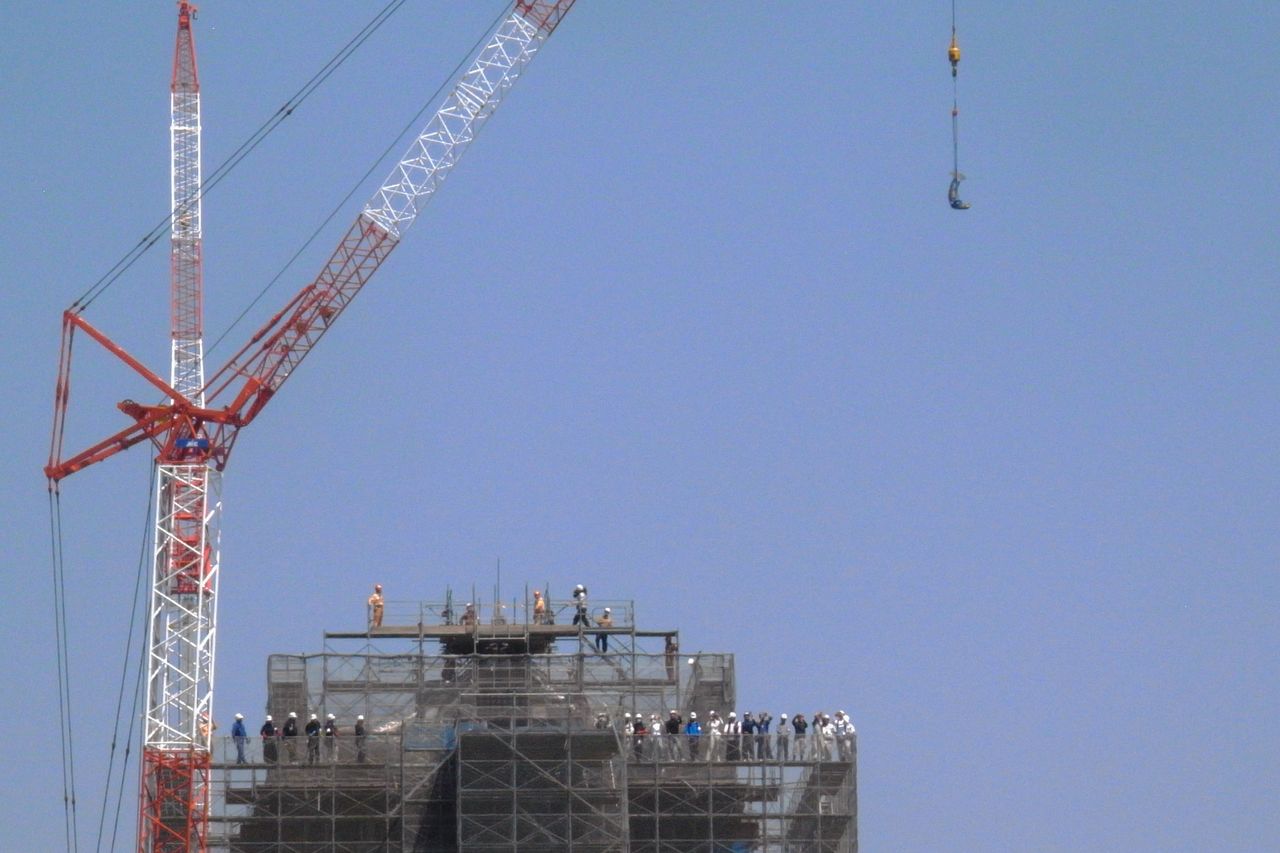 A crane maneuvers the shachihoko sculptures into place atop the main donjon of Kumamoto Castle in April 2018. (Photo courtesy of Kumamoto City) 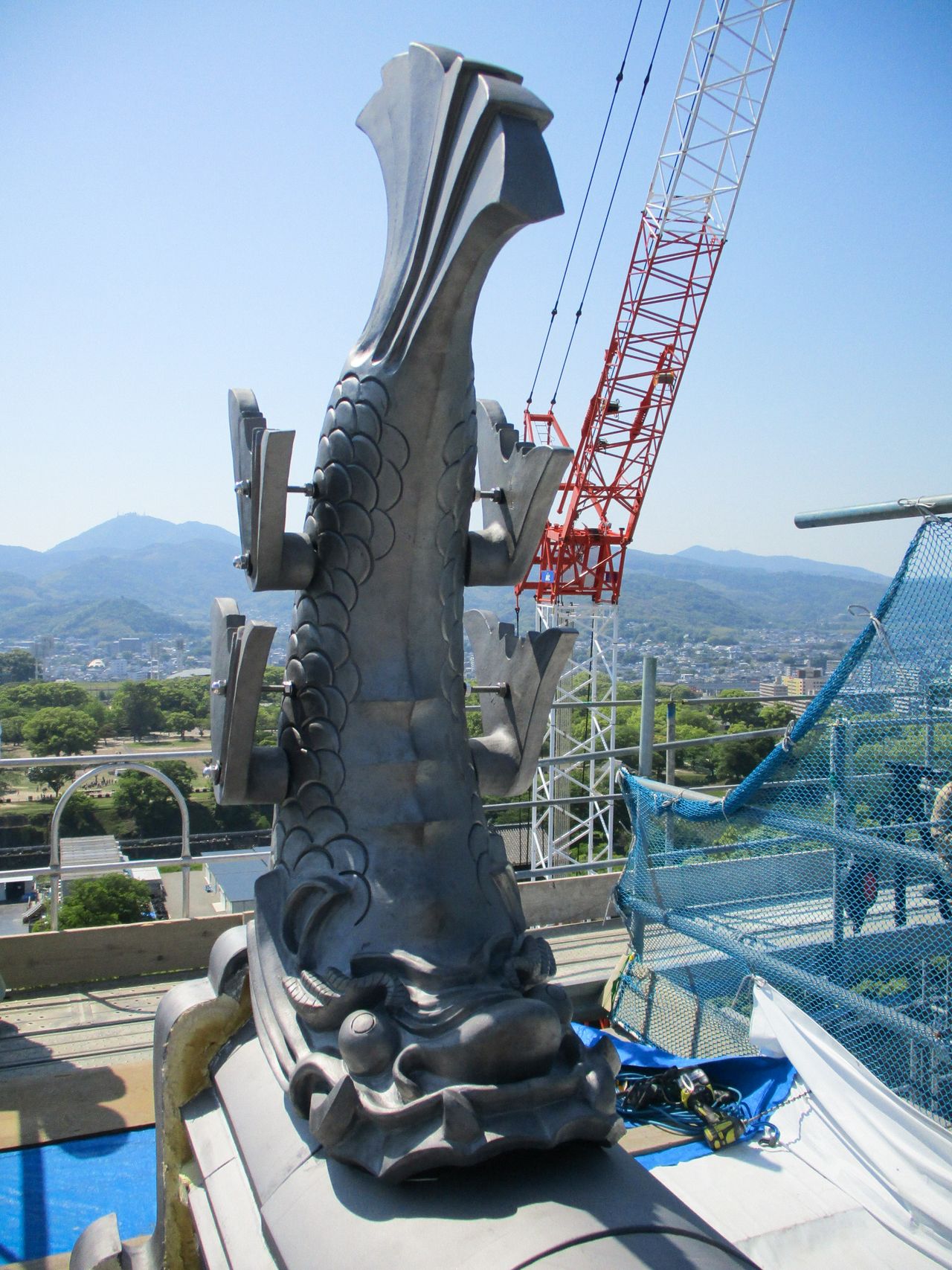 These shachihoko, symbols of the main donjon of Kumamoto Castle, were restored some two years after being damaged in an earthquake. The Nippon Foundation contributed funding to the manufacturing, which cost some ¥25 million. (Photo courtesy of Kumamoto City)

The creation of the new shachihoko sculptures was undertaken by Fujimoto Onigawara, a firm located in Uki City, Kumamoto Prefecture, with the head of the firm, Fujimoto Kōsuke, personally leading the project. In 2007, Fujimoto’s father, Katsumi, made the previous shachihoko sculptures for both the main and lesser donjons as part of commemorations of the 400th anniversary of the original construction of the castle. The elder Fujimoto died three years later, which his son says motivated him to personally re-create the shachihoko sculptures after they were damaged in the 2016 quakes. He says he wanted them to become symbols of the postquake recovery, and that he looked forward to drawing on the accumulated experience of himself and his father to produce them. Additionally, Fujimoto Shūgo, Kōsuke’s son, came back home after having moved to Tokyo and took on the manufacture of the shachihoko sculptures for the lesser donjon, which are scheduled to be installed in August 2020. The shachihoko sculptures of the castle keep are thus being restored by skills received from the father and passed on to a third generation.

Work continues steadily on the castle keep, on a schedule of these structures being opened to the public in the Spring of 2021 and the restoration work completed in 2037. One might almost believe that the new shachihoko sculptures watch over the rebuilding from on high. 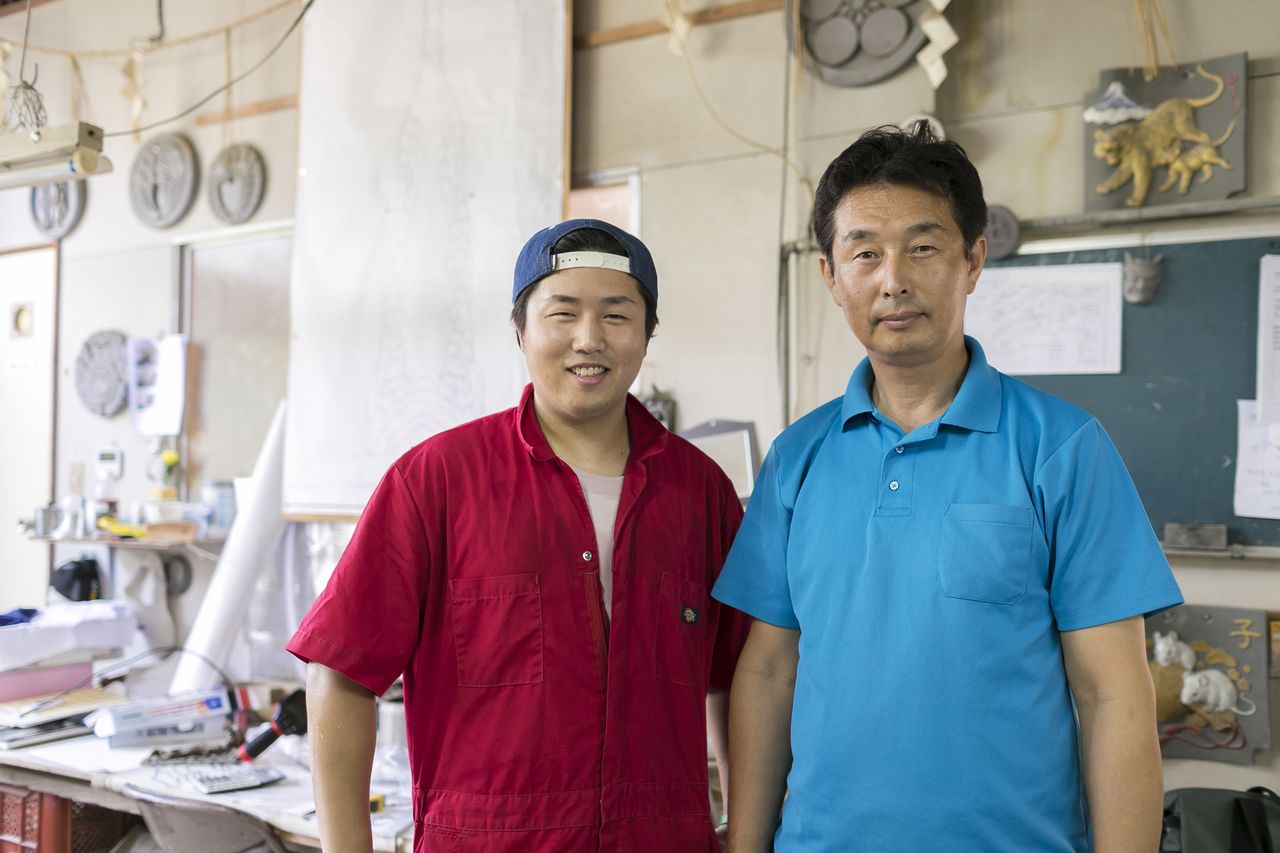 Fujimoto Kōsuke (right) and his son Shūgo at the Fujimoto Onigawara workshop, where work on the shachihoko sculptures is underway. (© Odasaki Tomohiro; all rights reserved) 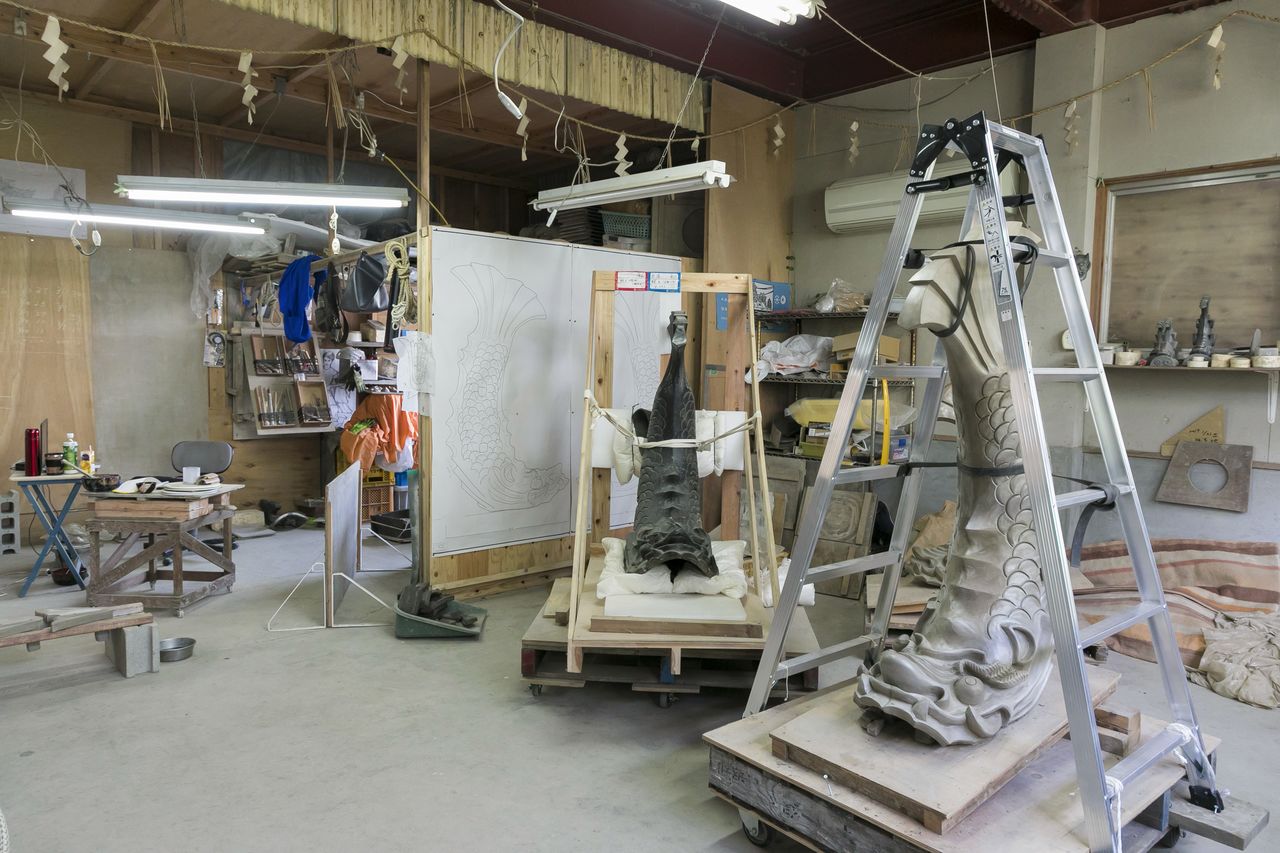 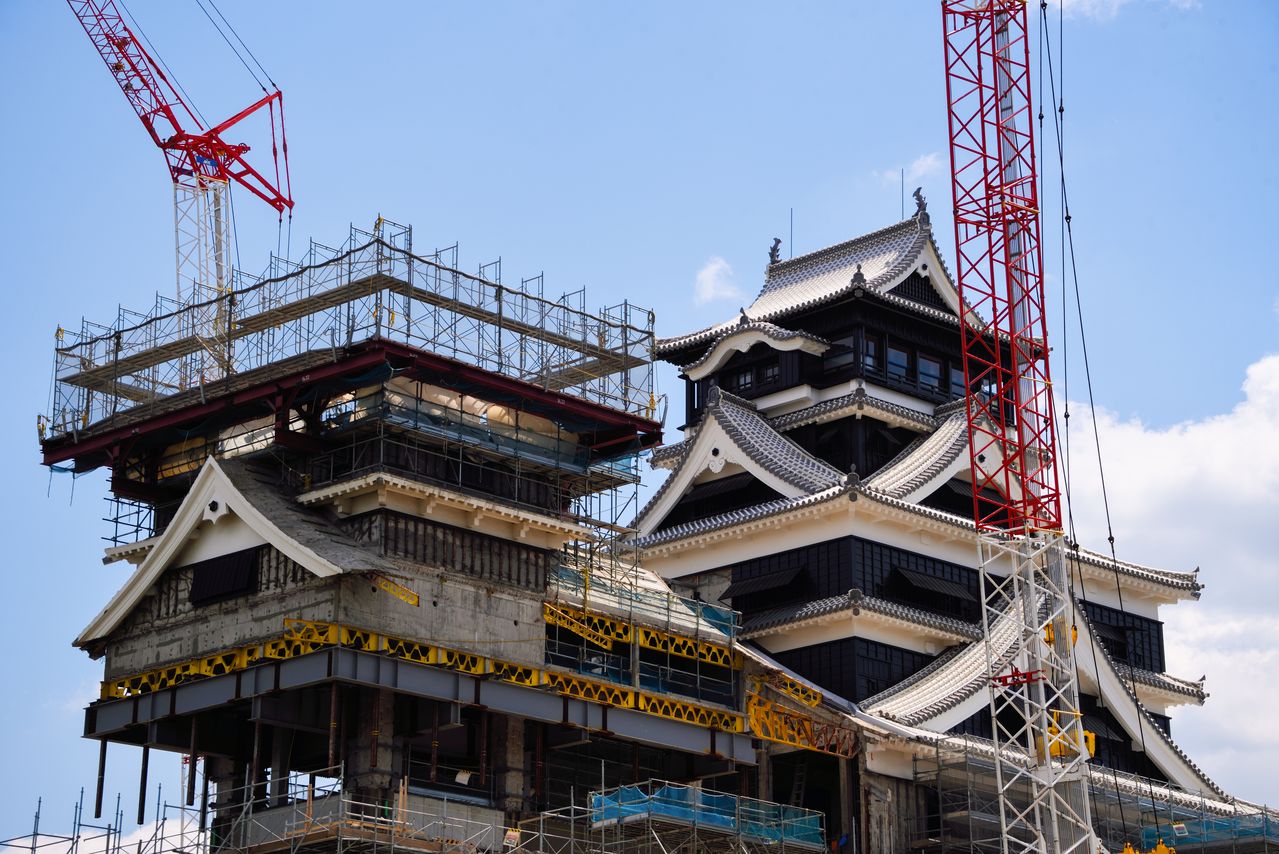 The lesser donjon with scaffolding still in place as of this writing. 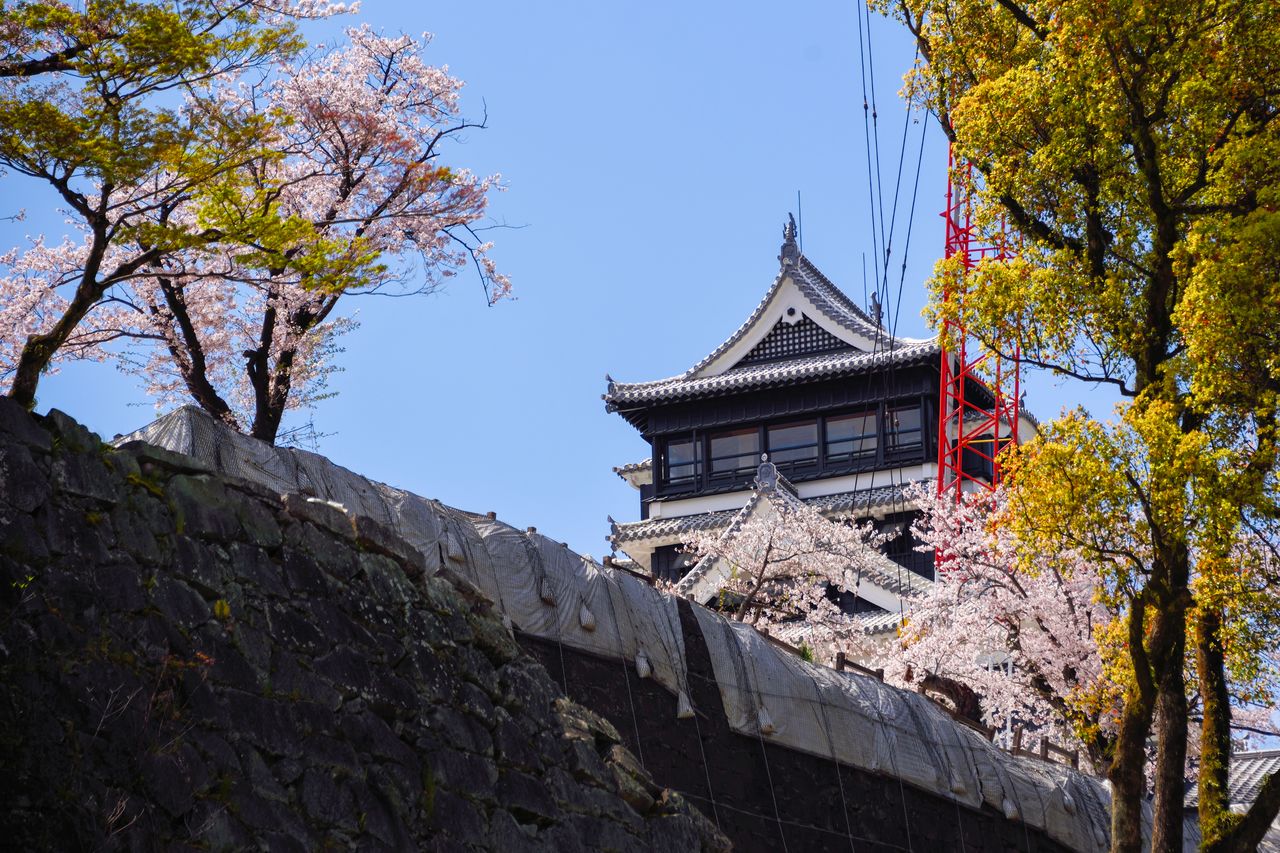 The stone wall, under reconstruction, and the cherry blossoms and the shachihoko sculpture of the main donjon beyond.

Access: Approx. 10 mins. by city transport from Kumamoto Station to Kumamoto-jō-Shiyakushomae Station, then a short walk.

(Originally published in Japanese. Photos and text by Kaoka Yasuhiro. Photographs by Kusano Seiichirō. Banner photo: A sight of the shachihoko sculptures of the main donjon of Kumamoto Castle, framed by cherry blossoms.)