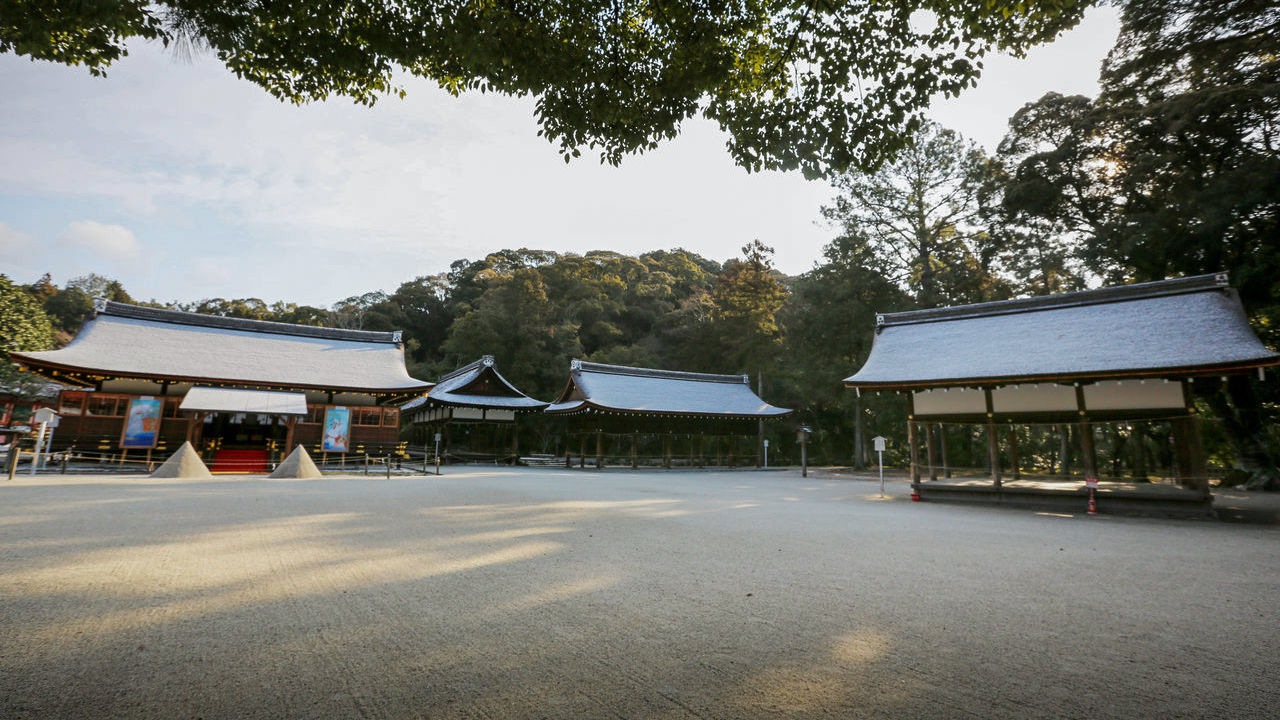 Jul 15, 2018
This pair of Shintō shrines in Kyoto are the oldest shrines in the old capital. The Shimogamo shrine was situated so as to offer divine protection to the imperial palace to the southwest. Each May the Kamigamo and Shimogamo shrines—part of Kyoto’s World Heritage designation—host the Aoi Matsuri festival, a top Kyoto cultural draw.

Customs Related to Purification with Salt Originated at Kamigamo Shrine

Kyoto’s two oldest shrines, collectively known as the Kamo shrines, lie in the upper reaches of the Kamo River running north to south through the city. These are the Kamigamo-jinja and Shimogamo-jinja, the “upper” and “lower” Kamo shrines, respectively. Shimogamo shrine, northeast of the Kyoto Imperial Palace, is held to protect the palace from malign spirits coming from this direction, considered inauspicious according to onmyōdō, Japan’s traditional esoteric cosmology. 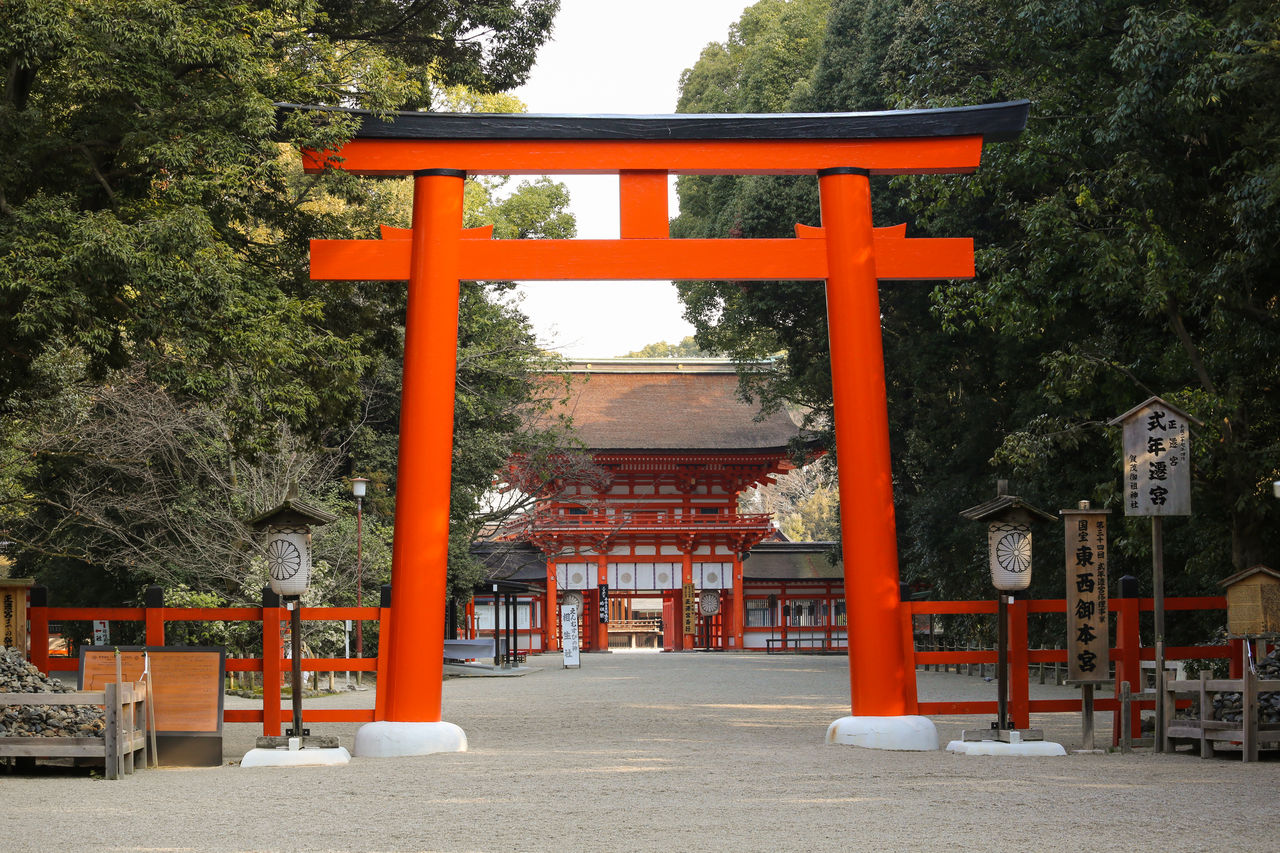 The formal names of the Kamigamo and Shimogamo shrines are, respectively, Kamo Wakeikazuchi and Kamo Mioya. The origin story of the shrines is that when Tamayorihime-no-mikoto, a female member of the Kamo clan, was carrying out purification rites in a stream, a vermillion arrow floated by. She carried the arrow back to her dwelling, where its magical powers made a handsome man appear and leave Tamayorihime with child. When that male child came of age, he rose to the heavens to the sound of thunderclaps. The boy was Kamo Wakeikazuchi-no-ōkami, who is enshrined as the deity of Kamigamo shrine. Tamayorihime, meanwhile, is one of the deities enshrined at Shimogamo shrine.

Kamigamo shrine is situated between the Omonoi River to the east and the Mitarashi River to the west; its complex is built on sloping terrain in a delta formed by the two rivers. The sacred Mount Kōyama, 2 kilometers northwest of the shrine, can be worshiped from the shrine’s main worship hall. This mountain is where Kamo Wakeikazuchi is said to have descended to earth. The two conical mounds of sand to the left and right of the Hoso-dono worship hall, called tatezuna, are supposedly modeled after the contours of Mount Kōyama. The custom of mounding sand at rites for new construction or to ward off evil spirits, or of scattering sand or salt for purification, reputedly comes from the tatezuna of Kamigamo shrine. 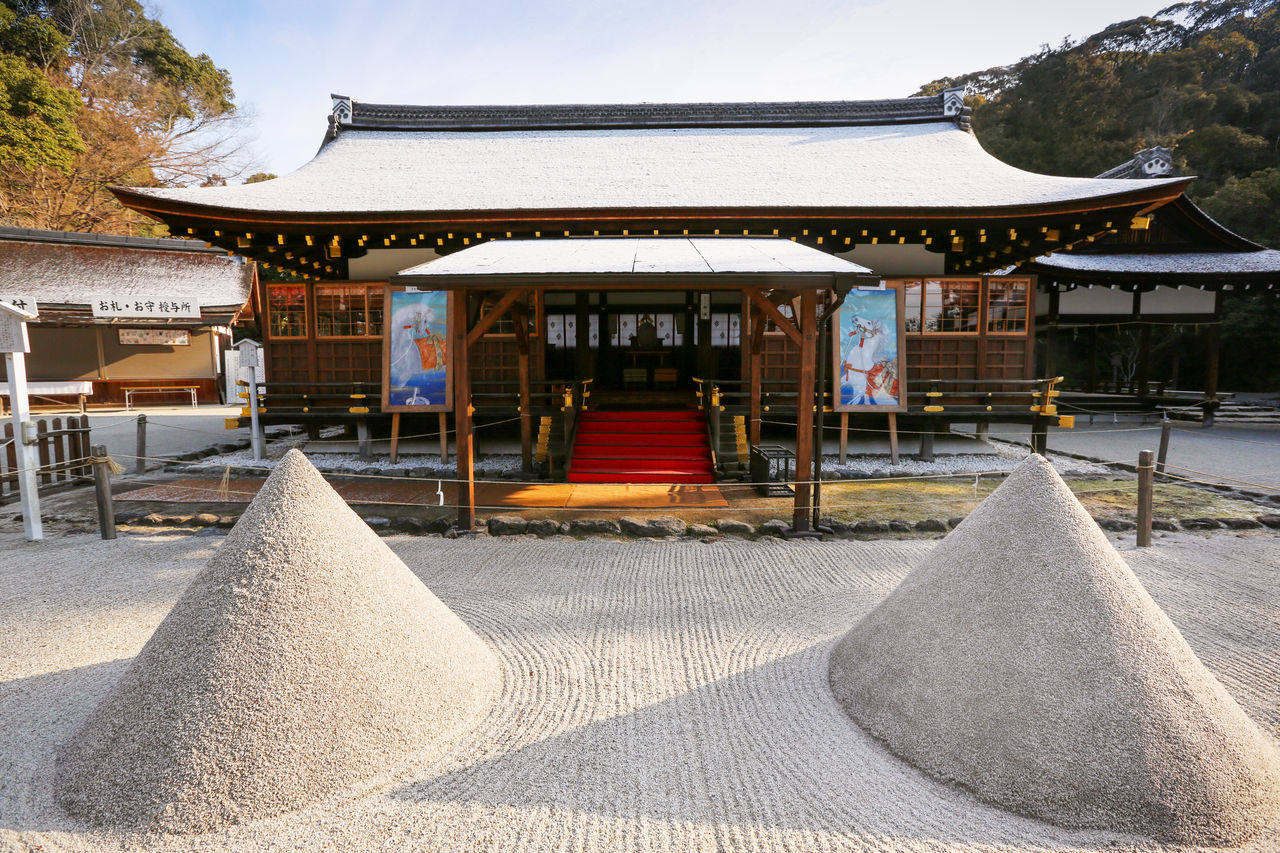 The tatezuna mounds in front of Kamigamo shrine’s worship hall. 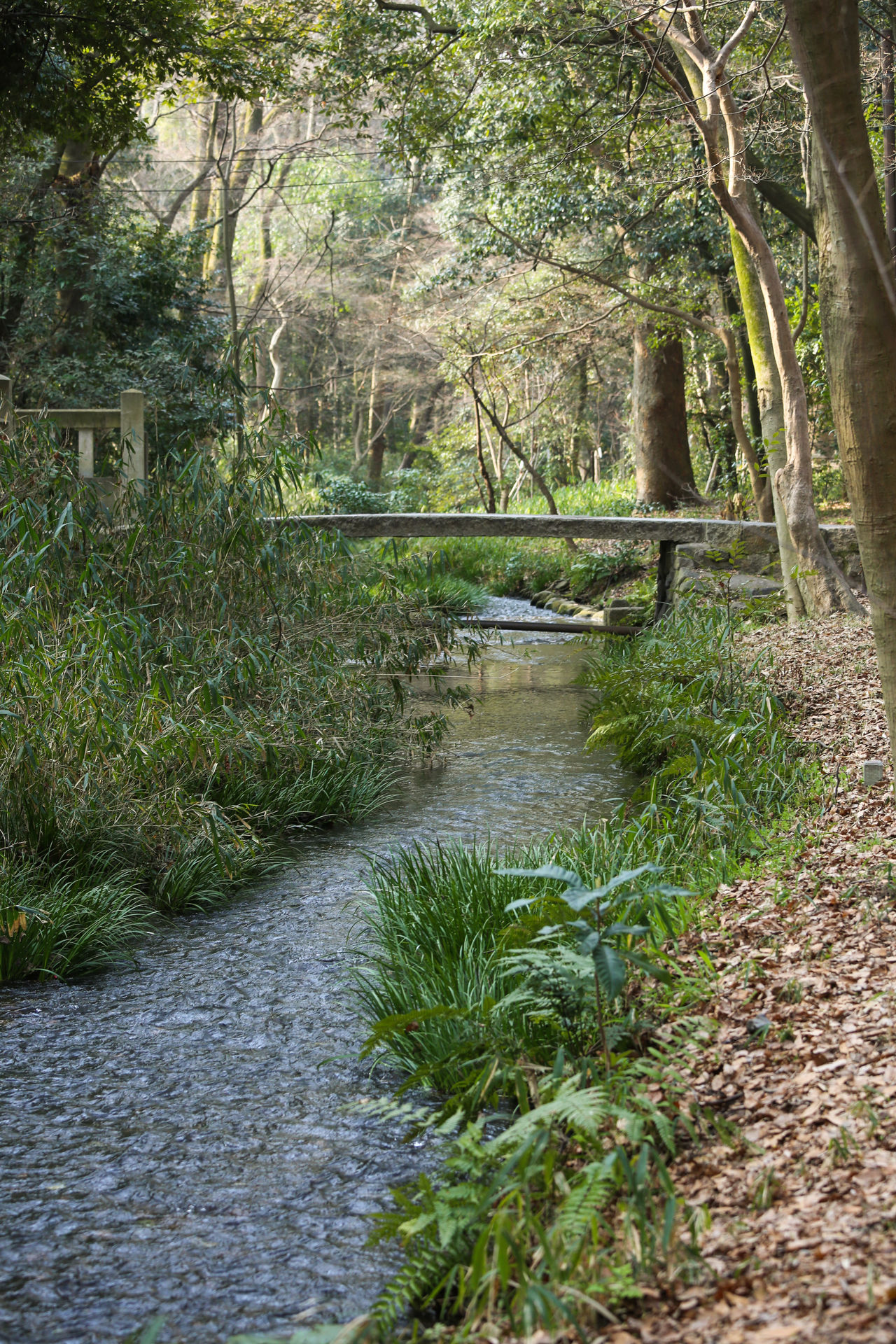 The Izumi River that flows past Shimogamo shrine.

The Aoi Matsuri, Dating from Tale of Genji Times

The Aoi Matsuri, formally known as the Kamo Matsuri, takes place every year on May 15. As the shrine festival for Kamigamo Shrine and Shimogamo Shrine, this is one of the three major festivals of Kyoto, along with the Gion and Jidai festivals. Also known as the Hollyhock Festival, in the Aoi Matsuri a procession of over 500 people attired in Heian period (794–1185) dress departs the Kyoto Imperial Palace, bound for Kamigamo shrine via Shimogamo shrine. In accordance with divine instructions held to date back to when Kamo Wakeikazuchi descended from the heavens to worship with leaves from hollyhock and katsura trees, hollyhock is used to bedeck not just the people but also the horses and oxen in the procession, giving the festival its name. The Aoi Matsuri dates back more than 1,000 years, even earning a mention in chronicles like Genji monogatari (trans. The Tale of Genji) and Makura no sōshi (trans. The Pillow Book), penned in the early eleventh century by Heian period women writers. 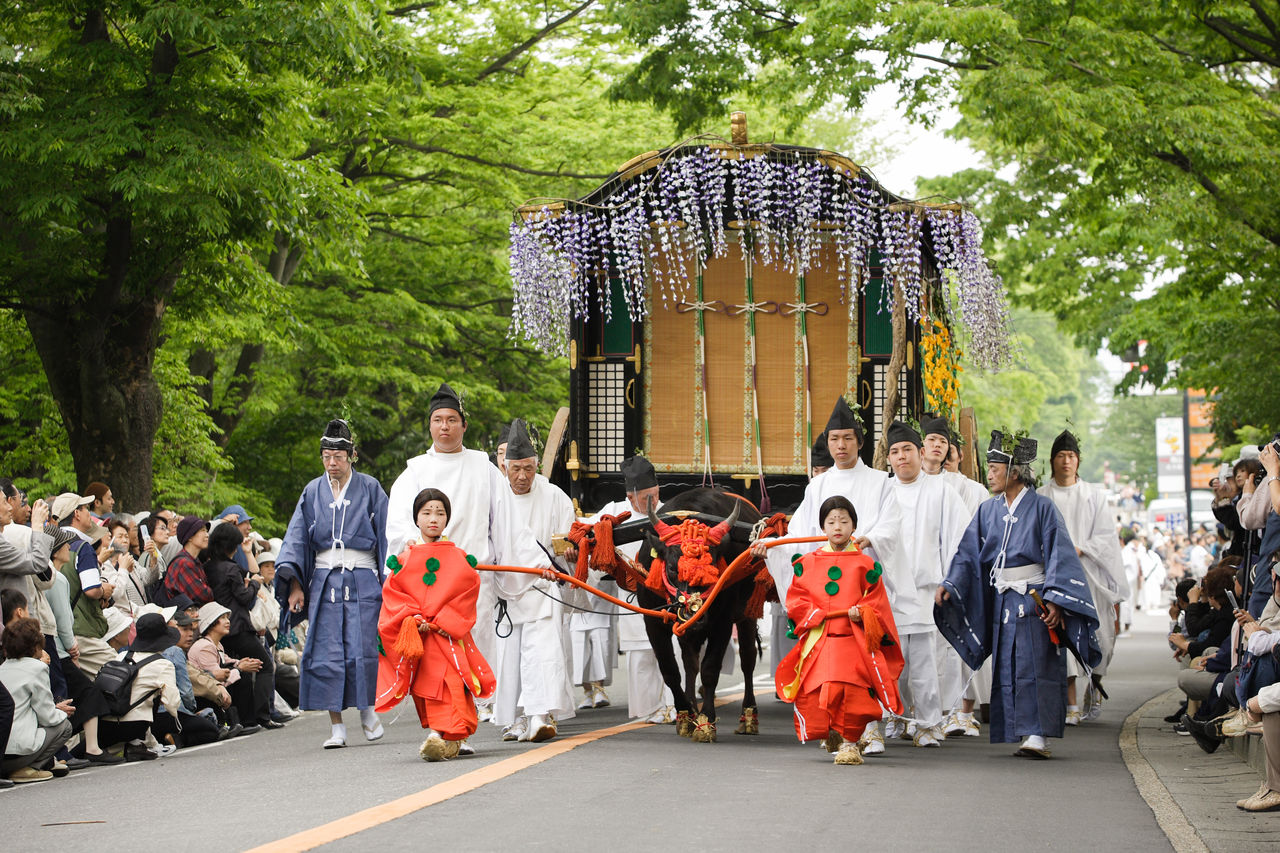 Kamigamo and Shimogamo shrines are included among the 17 constituent parts of the Historic Monuments of Ancient Kyoto, inscribed as a UNESCO World Heritage site in 1994.