Culture Lifestyle Jul 3, 2014
Every July tourists flock to the Gion Festival in Kyoto for the chance to see a parade of sumptuously decorated floats pass through the heart of the city. Nippon.com takes a look at the history and customs of this tradition-rich festival. 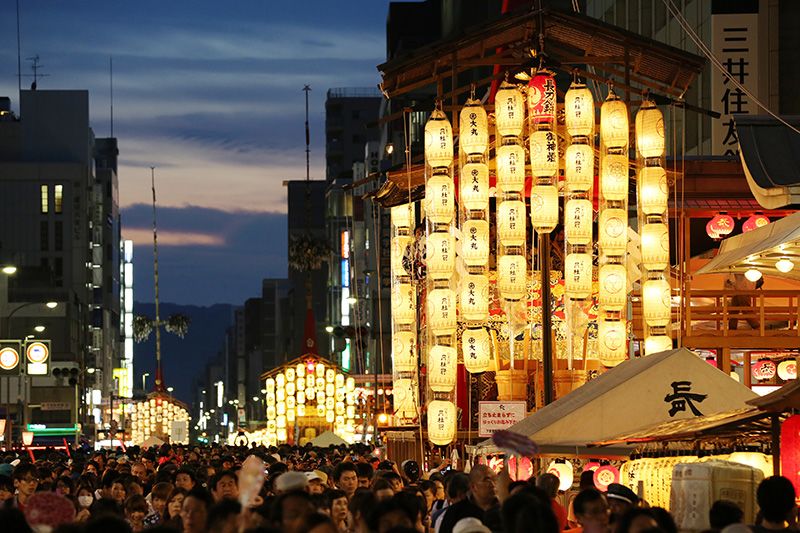 Lanterns light up the main street of Kyoto as crowds take in the pre-parade atmosphere.

The sound of gongs, flutes, and drums echoes through the Kyoto night, mingling with the children’s songs used to sell amulets. The scene is the Gion Festival in Japan’s former capital, where musicians are preparing for this year’s centerpiece float parade on July 17. The festival lasts throughout July, but is at its liveliest during the parade and the three evenings beforehand, when the festival floats are on display and the stalls filling the lamp-lit streets are bustling. More than a million visitors each year come to see one of Japan’s most popular festivals. 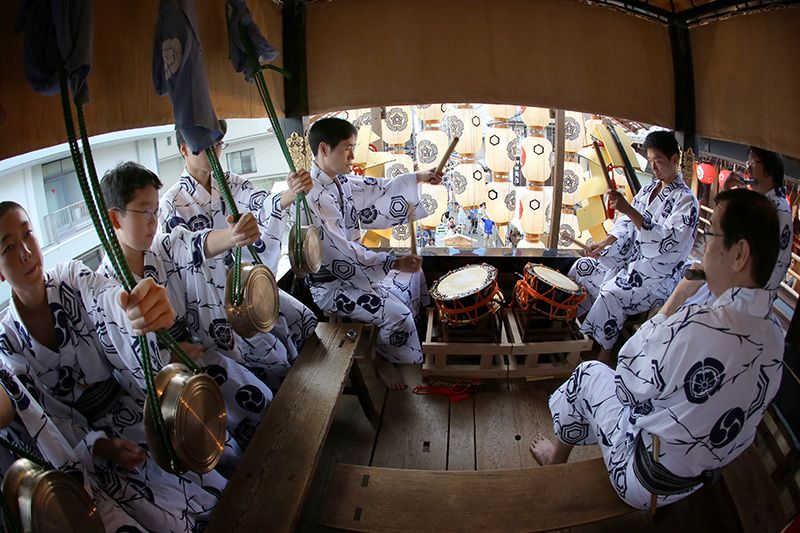 Musicians play inside a float on the day of the parade.

A stall selling fans and other festival goods alongside the main street of Shinmachi-dōri, with the Minami Kannon Yama visible in the background.

As darkness falls, many lanterns hanging on the side of the floats light up. People dressed in yukata, the casual summer robe traditionally associated with festivals, can be seen everywhere. At ten in the evening on Yoiyama (July 16), musicians begin marching and playing as part of a ritual prayer for good weather the following day. Festival-goers can hear the intermingling tunes as they stroll about. 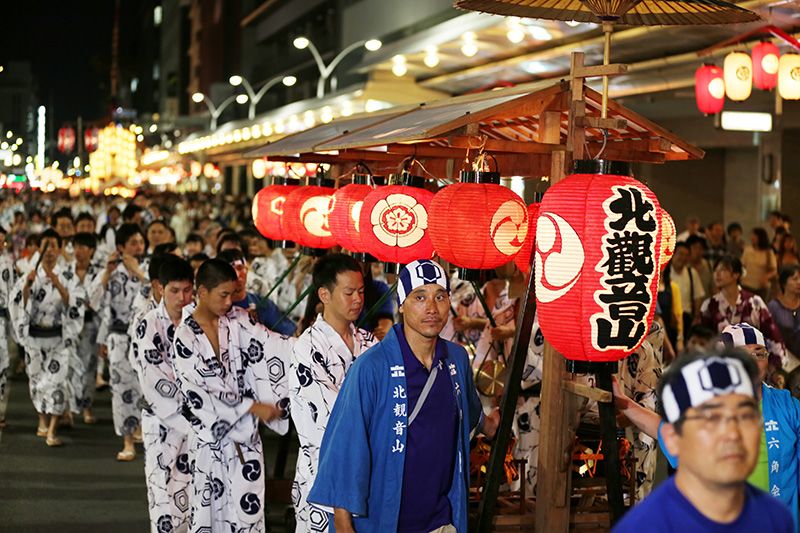 Musicians making their journey to the center of the city; they will not return to their district until after midnight.

By the morning of July 17, the streets are suddenly calm again. All of the night stalls have been cleared away, making room for the float parade that is about to begin. 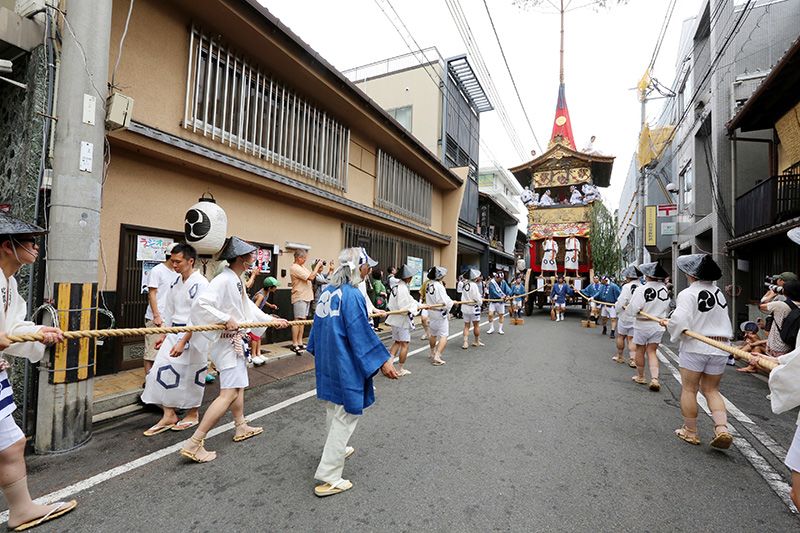 The Kita Kannon Yama float pulled by men in white haori jackets; others, wearing blue jackets, ensure the float is headed in the right direction. There are also people stationed on the roofs to make sure that the float, which is more than 20 meters high, does not become entangled with power lines.

There are two types of floats at the Gion Festival: yama (mountains) and hoko (spears). The yama floats, generally speaking, have no roof and carry elaborate dolls on their main sections. Meanwhile, the hoko floats are larger and have a roof and wheels, as well as a central pole that represents the spear that gives them their name; musicians play on a stage under the roof while the float is moving. A few of the yama floats, such as the Kita Kannon Yama float, also have a roof and wheels, so it is not always easy for an inexperienced observer to tell which type of float is which. 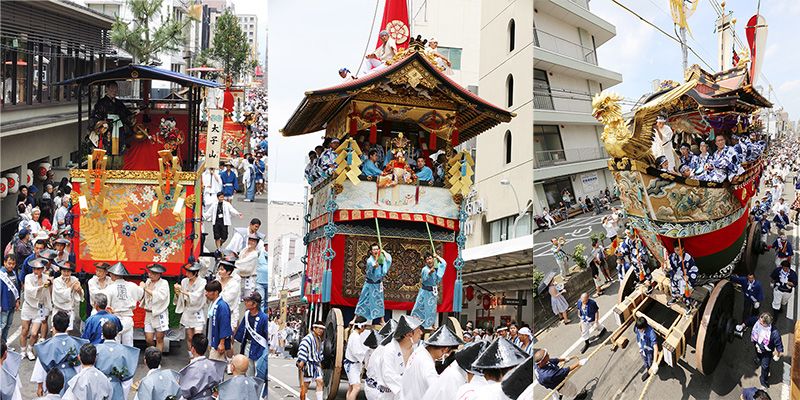 Dolls are carried on Kakkyo Yama (left) and Hoka Hoko (center) floats; the Fune Hoko float is shaped like a boat (right). 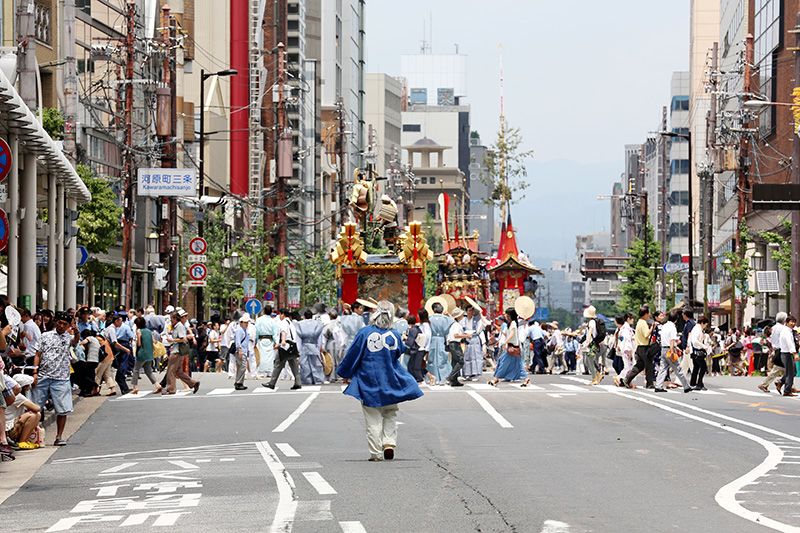 The procession moving along Shijō-dōri.

The line of 33 floats makes its stately progress to the rhythm of gongs and drums. A highlight comes when the giant hoko floats have to turn a corner. As the floats have rigid axles, the float teams have to line bamboo sticks under the wheels and slowly slide the vehicles around to make a ninety-degree turn. They are directed by men called ondotori who repeatedly shout yōitose! as a way of coordinating the team’s movements in unison. This is the breath-taking climax to the Gion parade. 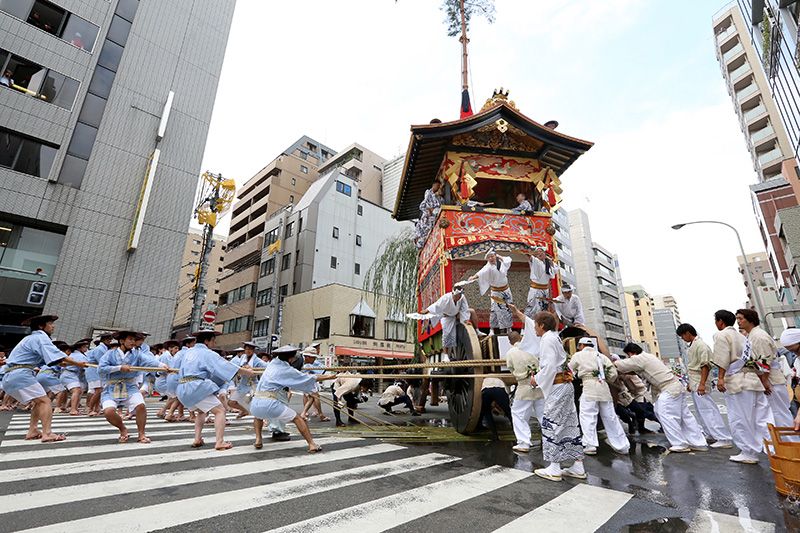 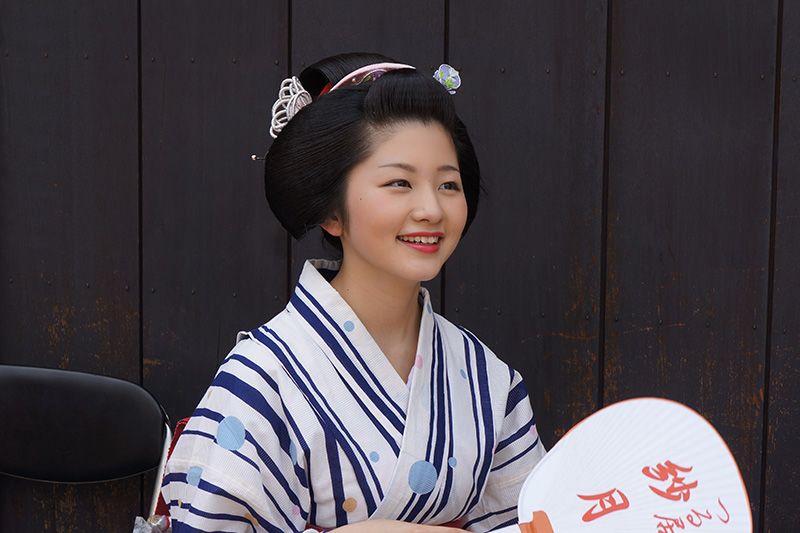 A maiko (apprentice geisha) dressed in a yukata enjoying the festivities.

A Way to Ward Off Evil Spirits

The festival’s history dates back over 1,100 years, to a time when Kyoto suffered from deadly summer pestilence. The Kamo River, which runs through the city, regularly flooded in those days, especially during the early summer rainy season, and the stagnant water was a breeding ground for disease.

And Kyoto was not the only part of Japan that suffered from such natural disasters. In the year 869, the Jōgan Earthquake struck the northeast of Japan; it is thought to have had a magnitude of more than 8.4 and to have resulted in a tsunami comparable to that of the 2011 Great East Japan Earthquake. Around this same period, Mount Fuji and Kyūshū’s Mount Aso also erupted. There was a belief among people at the time that such repeated natural disasters were a curse from the souls of those who had died violent deaths and that it was necessary to appease them. The Gion Festival originated from the rituals conducted at the Gion Shrine (today’s Yasaka Shrine) for the repose of those spirits.

The floats draw most of the attention today, but originally Yasaka Shrine’s three mikoshi (portable shrines) played the leading role, as Yoshida Kōjirō, president of the Gion Festival Floats Federation, explains: “For the mikoshi parade on July 17, the Shintō deity Susanoo-no-Mikoto and two other gods are carried in portable shrines to the otabisho, a resting point. They remain there until July 24, when they are carried back to Yasaka Shrine. The aim of the two rituals is to wash away impurity and ward off pestilence.”

The mikoshi carrying the Susanoo-no-Mikoto deity leaves Yasaka Shrine (left); the mayor of Kyoto delivers a speech in front of the three mikoshi (right).

The float parade was originally divided into two halves; one taking place before the mikoshi parade to welcome the gods, and the other taking place afterward to give them thanks. But now only the first parade is held.

The Pride of Kyoto

The floats, which were once a side show, moved to center stage thanks to the merchants of Kyoto. Commercial interests in the city, such as sake brewers and financiers, got a boost around 1336, when Kyoto once again became the capital, taking over from Kamakura. Each district of Kyoto began to flaunt its prosperity by producing a float.

After the city burned to the ground during the Ōnin War (1467–77), the Gion Festival was not held for a time, but the merchants revived the tradition and it effectively became their festival. As foreign trade flourished from the sixteenth century onward, the floats became more extravagant and impressive.

Ishikawa Takashi, president of the Foundation for the Preservation of Kita Kannon Yama, says that competition over who had the most splendid float was a part of the festival from the beginning. “Many of the merchants were frugal and lived modestly, but they didn’t hesitate to spend money on the festival. Extremely wealthy merchant families in the Rokkaku area, such as Mitsui and Matsuzakaya, spent huge sums to purchase textiles from distant Tibet and Persia as well as luxurious ornamentation. Merchants also invited their best clients at attend the festival. In short, the festival was a way for Kyoto merchants to display their hospitality.”

The floats are richly ornamented.

Because of the competition between merchants to display their affluence, valuable furnishings for the floats were imported from far and wide. Their accumulation of artistic treasures has led the floats to be dubbed “mobile museums,” and they inspire a deep pride in Kyoto citizens. A number of other Japanese cities have started their own festivals based on the Gion Festival—including, most notably, the Hakata Gion Yamakasa in Fukuoka, the Takayama Festival, and the Chichibu Night Festival.

The City Opens Up

Kyoto’s welcoming spirit is also apparent in the Byōbu Festival, held on the three days prior to the float parade. On display during this festival are the kinds of folding screens and art objects that merchants once kept in their storehouses and displayed to relatives and acquaintances.

“The Gion Festival is a time when Kyoto people open up and show visitors things that aren’t normally on display,” Ishikawa explains. This is part of the unique atmosphere that develops during festival season, reflecting the hospitality of Kyoto merchants.

Folding screens on display (left); tourists gather around a work of art (right).