Matsuri Days (3): A Guide to Hakata and the Yamakasa Festival

Society Culture Lifestyle Nov 21, 2012
The Hakata Gion Yamakasa festival dates back around 770 years. Among the unique attractions of the festival are its displays of intricately decorated floats. We talk to one of the men responsible for crafting these brightly colored works of art from scratch each year.

The Colorful Symbols of Summer

The Hakata Gion Yamakasa is an annual festival associated with Kushida Jinja, a Shintō shrine housing the guardian spirit of Fukuoka’s old Hakata district. The festival is best known for the Oiyama race in which teams of 30 men dash along the city streets carrying kakiyama floats weighing as much as a ton. But the festival is also notable for another kind of float: the enormous kazari-yamakasa (decorative floats) that are on display at 14 points throughout Hakata during the two weeks of the festival period. 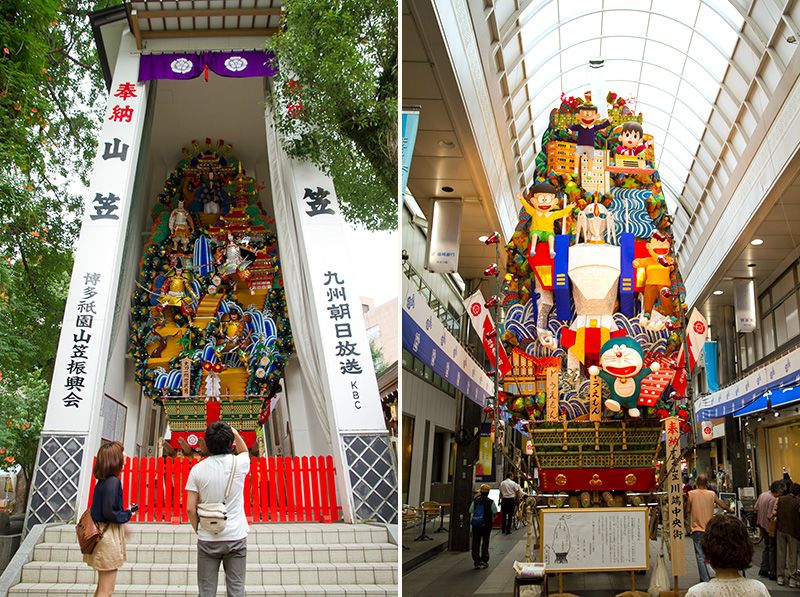 Two “kazari-yamakasa” floats on display in Fukuoka during the 2012 Hakata Gion Yamakasa festival.

Standing up to 12 meters high, the colossal floats are three-dimensional dioramas that dazzle with their size and brightly colored decorations. A closer look reveals intricate narratives, including everything from ancient events to scenes from contemporary life. The scenes are drawn in breath-taking detail—down to individual facial expressions, flowing garments, and stylized wavelike motifs. Each float is a remarkable example of local traditions of craftsmanship that have been honed over generations.

The History of the Yamakasa 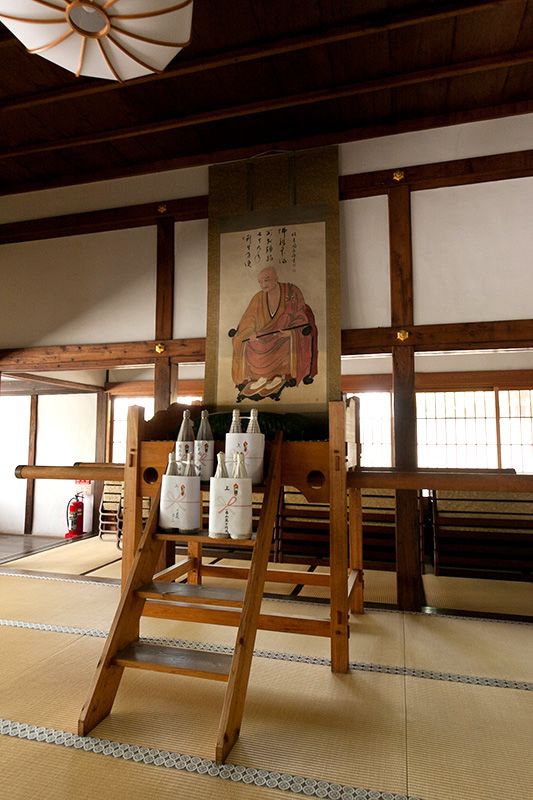 A scroll painting of the high priest Shōichi Kokushi, and a “segakidana” platform for offerings to hungry ghosts, at Jōtenji, the birthplace of the Hakata Gion Yamakasa festival.

But why the two types of floats at one single festival? Originally, there was only one type of float. According to the Hakata Gion Yamakasa Promotion Association, the festival dates back to an outbreak of plague in 1241, when the Buddhist priest Shōichi Kokushi of Jōtenji made offerings and sprinkled holy water from on top of an altar dedicated to appeasing the spirits of the hungry ghosts (segakidana). Over the years, this incident gave rise to the tradition of decorating large floats modeled on segakidana and riding them through the city.

At the start of the modern era, the tradition of carrying massive floats through the streets still survived, even though these floats had grown to a height of 15 or 16 meters. But the arrival of electricity and the spread of power lines during the last decades of the nineteenth century made it impossible to maneuver the floats through the streets. It was this that led to the emergence of two distinct types of floats: smaller floats (kakiyama) that could be carried, and larger floats (kazari-yamakasa) that were now used exclusively for decoration and display. The decorated floats became more elaborate than ever. Today they are set out at 14 locations in the city.

The display brightens the streets of Hakata from July 1 every year. For locals, it is a sign that summer has truly arrived and that the famous two-week festival is about to begin. The short life of the floats adds to the sense of occasion: in 2012, the 14 floats built specially for the festival were dismantled after just 15 days on display.

Each nagare group that takes part in the Oiyama race creates its own kazari-yamakasa float. The nagare take it in turns to play the leading role at the festival each year—in 2012 the Chiyoda nagare was in pole position. Since this responsibility comes around only once every seven years, it is a landmark event and a highlight in the lives of all those who take part.

To find out more about the floats at the heart of the Hakata Gion Yamakasa festival, we visited Kawasaki Shūichi, the craftsman in charge of creating the kazari-yamakasa float for the Chiyoda nagare this year. 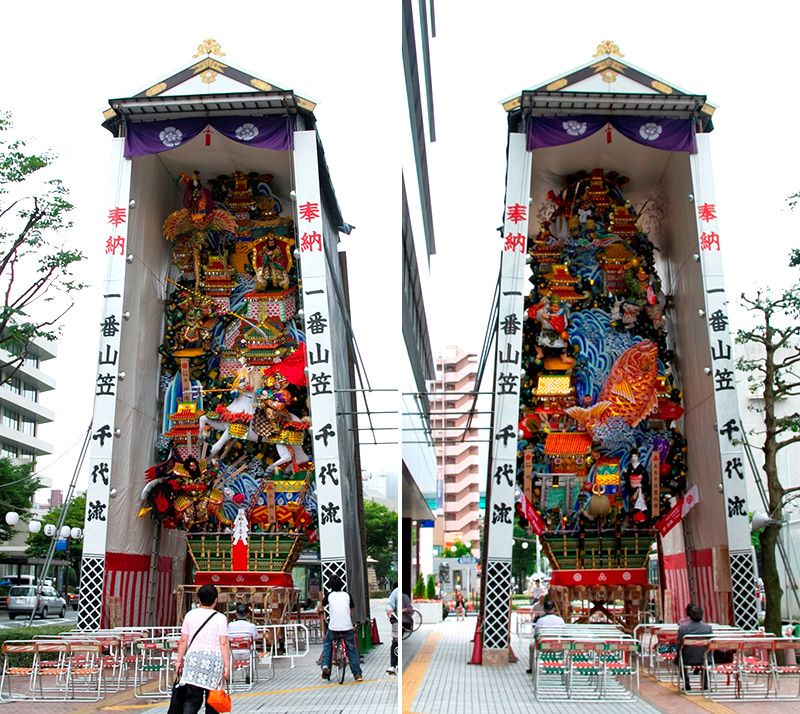 The “omote” (left) and “miokuri” sides of the Chiyoda “nagare kazari-yamakasa” float, created by Kawasaki Shūichi.

Work on the float has just been completed when we visit. The float itself has already been delivered to the nagare, but Kawasaki is still surrounded by the evidence of his hard work as he greets us with a smile from amid a mass of nails, hammers, fragments of cloth, and sewing machines. He begins by telling us a bit more about the decorated floats:

“The floats are more than 10 meters tall and made up of thousands of individual parts. Of course, one person can’t do all the work alone. I have about a dozen people helping me. Along with bamboo, we use gold brocade, washi paper, and all kinds of other materials to make the floats. The work involves all sorts of tasks I don’t normally do in my main job: cutting, stitching, gluing . . . you name it.”

Putting Traditional Skills to Use 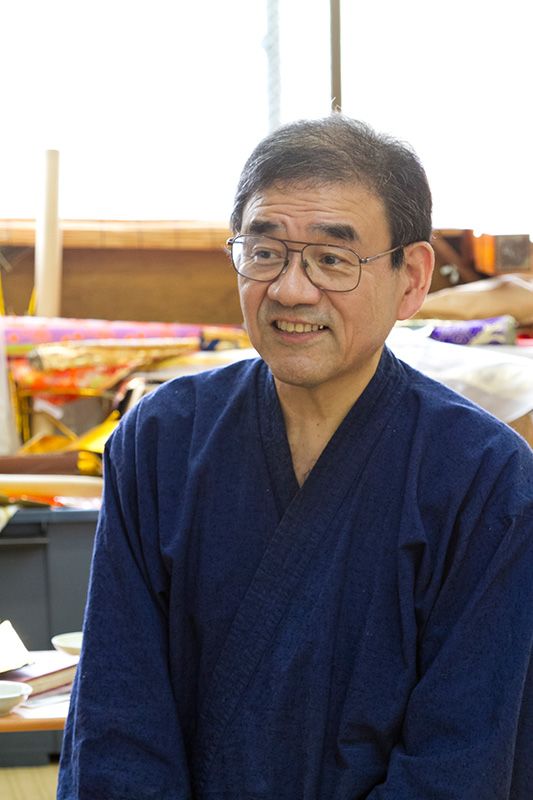 Kawasaki Shūichi in his workshop.

Kawasaki is a doll-maker by training, a specialist in Fukuoka’s traditional clay dolls, known as Hakata ningyō. He learned the craft at his father’s knee. After graduating from university, Kawasaki apprenticed under his older sister, Sachiko. He was awarded the Prime Minister’s Award in 2012 and currently serves as the chairman of the Hakata Ningyō Makers Society. He began to work on kazari-yamakasa floats 17 years ago, at the age of 45.

A Hakata Ningyō is normally the work of a single person using simple tools: clay, brush, paints, and kiln. Superficially, at least, this work seems to be quite different from the intricate sequence of procedures required to make a Yamakasa float. In fact, though, Hakata ningyō craftsmen are in charge of making the floats every year, as Kawasaki explains:

“In historical times, making the floats was a specialized profession. But after the Meiji Restoration in 1868, it became difficult for people to support themselves for the whole year on what they made from festival floats, and the number of craftsmen with the necessary skills dwindled. At the same time, the city had large numbers of people making the traditional Hakata clay dolls. Gradually, the same people started to get involved in both. It takes about three months to make a float–so for around a quarter of the year that’s what takes up our time.”

A "Hakata ningyō" created by Kawasaki (left). The doll workshop where the “kazari-yamakasa” is made.

Of course, dolls are viewed close up—quite unlike a festival float, which may be seen by thousands or tens of thousands of people during the course of the festival. This calls for quite different approaches.

“With a doll, one thread of hair more or less can make a big difference to the expression on the doll’s face. With a float, though, what’s important is how it looks when viewed from a distance. First of all, I sketch out a rough image of what I want the completed float to look like before I start working on it. Often, though, things don’t turn out exactly like that initial drawing. As I make the various individual parts, I try to keep in mind what the float will look like when people see it from a distance of 10 meters or so. Only when the very last decoration is added is the float completed. The overlap and interplay between the different colors makes a big difference to the overall impact.” 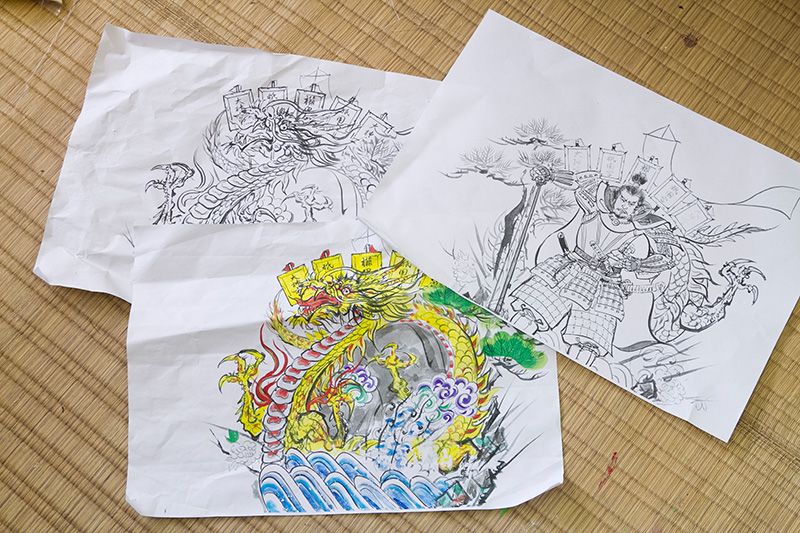 For the 2012 float, Kawasaki incorporated a historical theme—his specialty—for the omote display facing Kushida Jinja, with scenes from the “Three Kingdoms” period in Chinese history, when three warring states vied for power. The opposite side incorporates a number of auspicious symbols and emblems of good fortune, including the god Ebisu, who has a particularly close connection with the Chiyoda area. Kawasaki says he chose the symbols as a way of expressing people’s hopes for a swift economic recovery.

Kawasaki says he feels honored to be a part of the Hakata Gion Yamakasa festival every year. But the job is not without its pressures:

“I consider myself very fortunate to live in a place with an important festival like this, and honored to play such an important part. But there’s a lot of pressure in the weeks leading up the festival. I’m always worrying about whether I’ll manage to finish the job on time. There are times when I wake up in the middle of the night worrying.”

But the day we meet him, Kawasaki looks relaxed, the pressure of completing the float off his shoulders for another year. Given the importance of the festival for the local community, missing the deadline is not an option. Kawasaki simply has to finish the job on time, come what may. On top of this, he has to create a float impressive enough to captivate viewers and satisfy the exacting standards of the local audience.

“We have an expression in Hakata for going to look at the floats at festival time: We call it yama home, or ‘float praising.’ Saying a few words in praise of someone’s neighborhood float becomes part of everyday conversation around festival time. It would be very bad form to criticize a float! Of course, every neighborhood is convinced that their float is the best. But I’ll admit that it brings a smile to my face when people compliment the float. It makes me feel that all the hard work was worthwhile.

We asked Kawasaki to tell us some of the features to look out for on a kazari-yamakasa float. 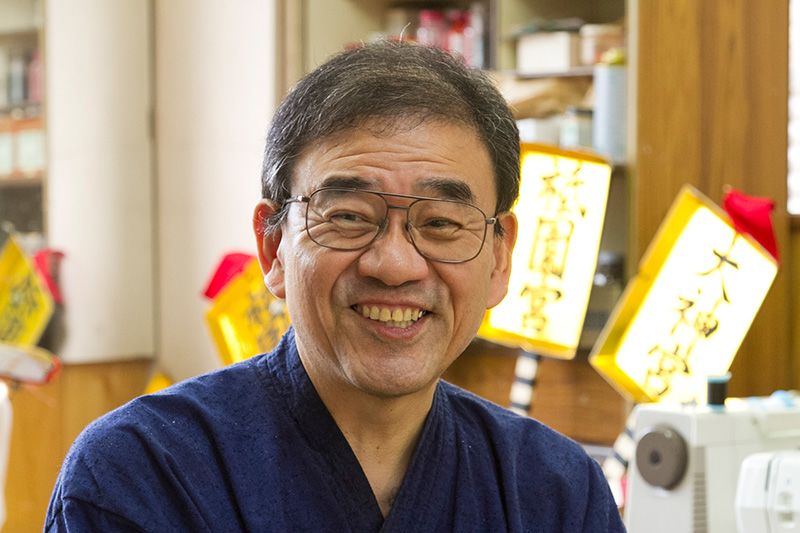 “The expressiveness of the floats comes from their dramatic 3D realization of halls, rocks, and waves—the motifs that you often find on Japanese folding screens and other styles of Japanese painting. The combination of the flat surfaces with with three-dimensional elements creates really interesting effects. 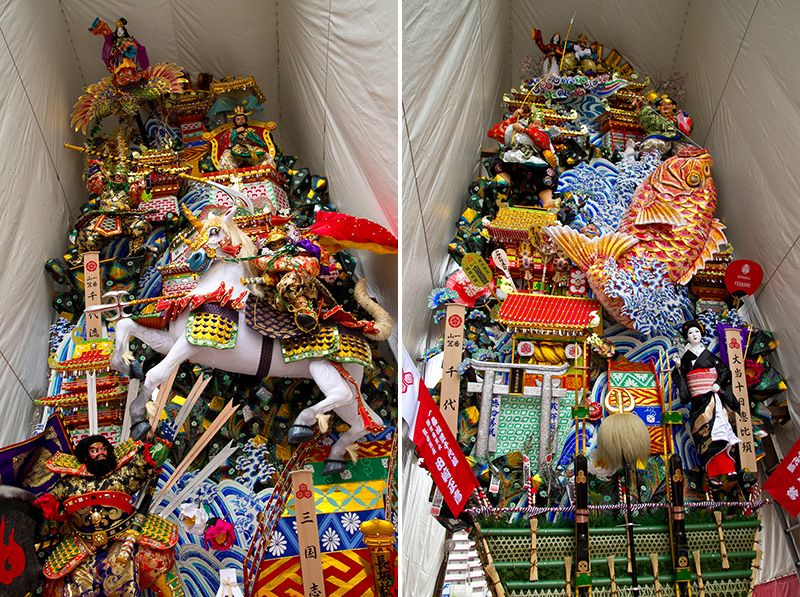 A view of each side of the float created by Kawasaki for the 2012 festival. The “omote” side (left) facing Kushida Jinja uses motifs from the “Three Kingdoms” period of Chinese history, full of dramatic depictions of bold warriors and bright colors. The opposite “miokuri” side features auspicious symbols of good fortune. Perhaps this year’s float will help to turn the economy around!