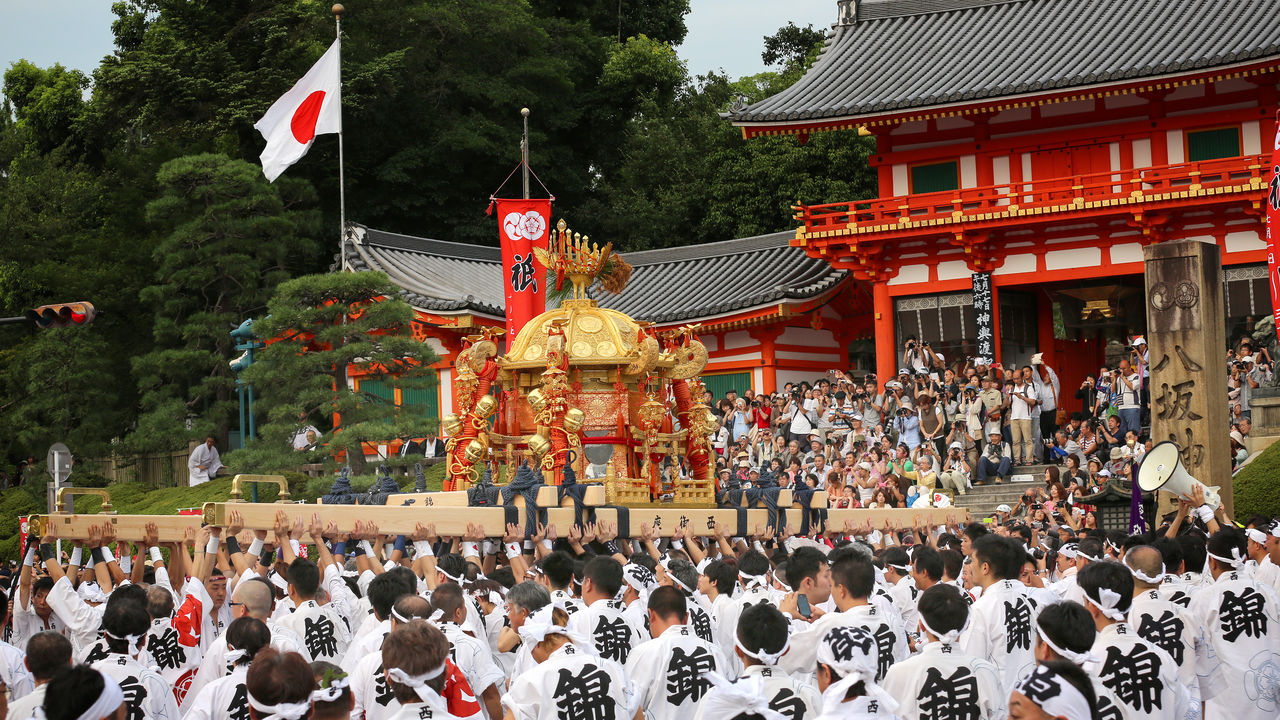 Jul 21, 2018
With a history dating back some 1,200 years, Yasaka Shrine has long been home to Japan’s peculiar blend of Shintō and Buddhist faiths. It is famed for the Gion Festival, one of Japan’s three major festivals, and is a must-see for Kyoto visitors thanks to its central location.

Kyoto is a city whose streets are laid out in a grid pattern. At the eastern end of Shijō-dōri, one of the city’s main east-west arteries, lies Yasaka Shrine. A short flight of stone steps at the end of the street brings visitors to a vermillion gate whose beauty has come to symbolize the shrine. 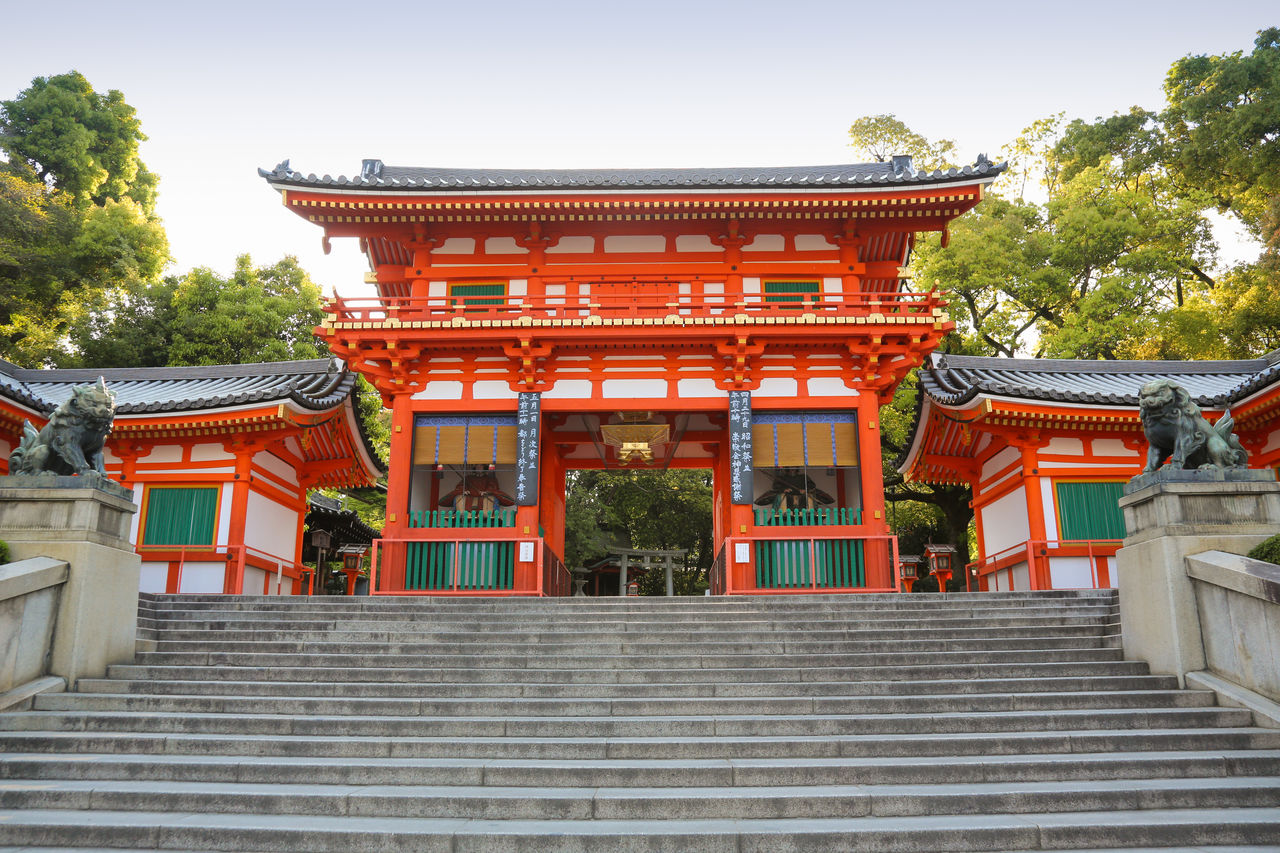 Religion in ancient Japan frequently melded Shintō and Buddhist influences, and religious institutions commonly venerated both Shintō kami (gods) and Buddhist deities. Prior to the Meiji government’s 1868 edict separating Shintō from Buddhism, Yasaka Shrine had been called variously Gionsha, Gion Tenjin, Gion Kanshin-in, or Gion Gozu Tennō. Gion is well-known today as a geisha quarter, but its name derives from Gion-shōja, the Japanese rendering of Jetavana-vihāra, a site in northern India sacred to Buddhism where Gautama Buddha was said to have preached.

There are various theories regarding Yasaka Shrine’s origins. One is that a monk named Ennyo prayed for Gozu Tennō, the guardian deity of Gion-shōja, to appear and erected Gion-kanshin-in in 876 as a shrine to that god. Another is that the shrine originated in 926 when a monk built a temple named Gion Tenshindō. The shrine’s own lore, meanwhile, holds that there was an earlier hall on the site, built in 656 to venerate the guardian deity of the Yasaka clan, who hailed from the Goguryeo kingdom on the Korean peninsula. According to legend, this god had come from Gozusan, a mountain located in the Silla kingdom (today called Gayasan). 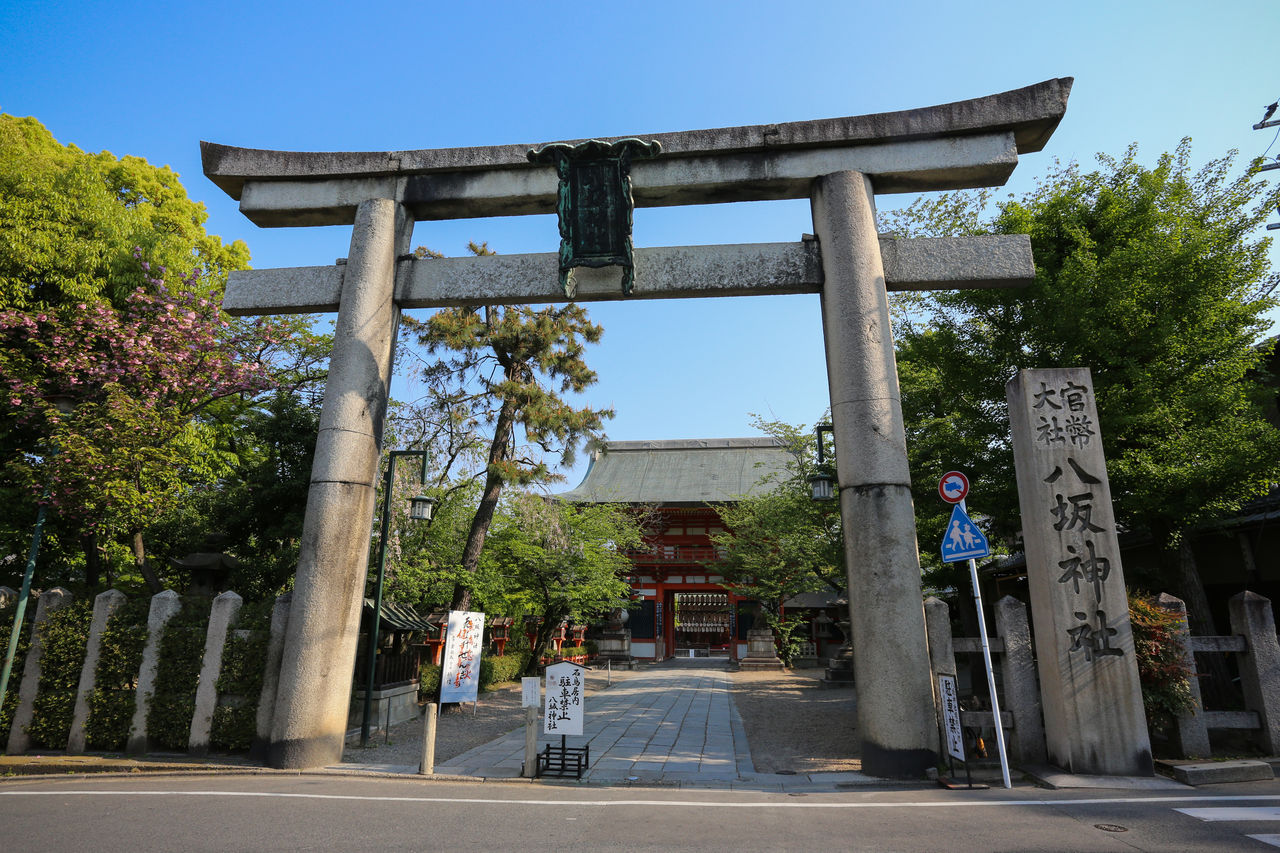 The main deity worshipped at Yasaka Shrine is Susanoo-no-Mikoto, together with his consort Kushiinada-Hime-no-Mikoto and their eight offspring. After committing many misdeeds, Susanoo was banished from the Land of the Gods. According to the historical chronicle Nihon shoki, he first alighted on Gozusan on the Korean peninsula and then traveled eastward over the sea, landing in western Japan’s Izumo province (today Shimane Prefecture). In any case, both Shintō and Buddhism were practiced at Yasaka shrine from the outset, and due to the fusion of influences from Korea, Yasaka shrine cultivated a distinctive culture that incorporated the worship of non-native deities.

Yasaka Shrine’s summer festival, the Gion Festival, is one of Japan’s three major matsuri. It involves various religious rites which take place throughout July every year, but the festival’s climax is the stately procession of the yama and hoko, gorgeously decorated floats that have been called “museums on wheels.” The tsuji mawashi, where the floats, some of which weigh over 10 tons, are slid over wet bamboo to change directions at intersections, is a thrilling sight. 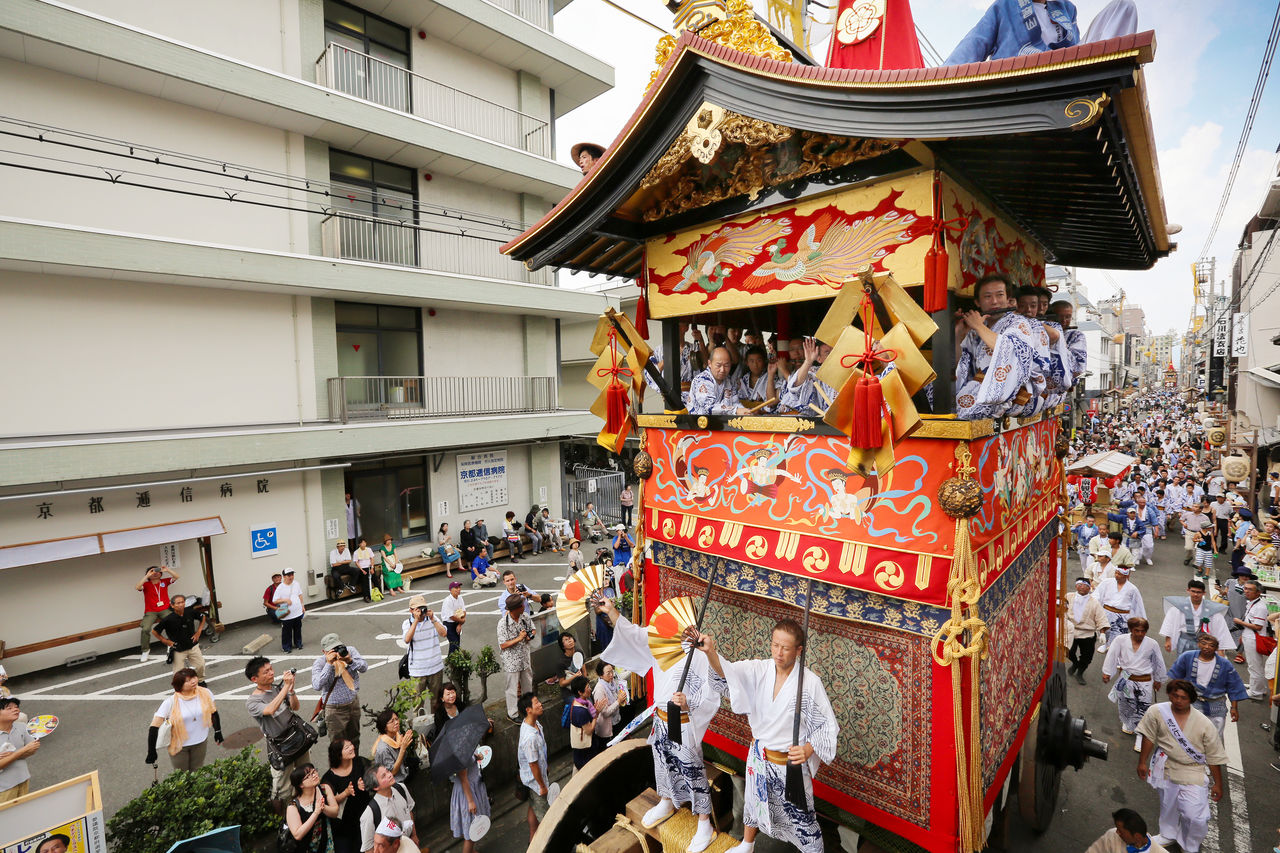 The Gion Festival. Floats are topped with halberds or spears.

In 869, when Kyoto was swept by pestilence that caused widespread death, a ceremony called goryō-e was held, with 66 halberds, representing the provinces of the country at the time, erected to pacify the souls of the dead. That ceremony, over 1,100 years ago, was the origin of today’s Gion Festival. Following a period of civil war in 1467–77, when most of Kyoto was burned to the ground, the festival ceased to be held; it was revived some 30 years later, in 1500, and has taken place yearly since then.

(Originally written in Japanese by Toya Manabu. Photos by Nakano Haruo. Banner photo: Gion Matsuri events include a procession of the sacred palanquin.)