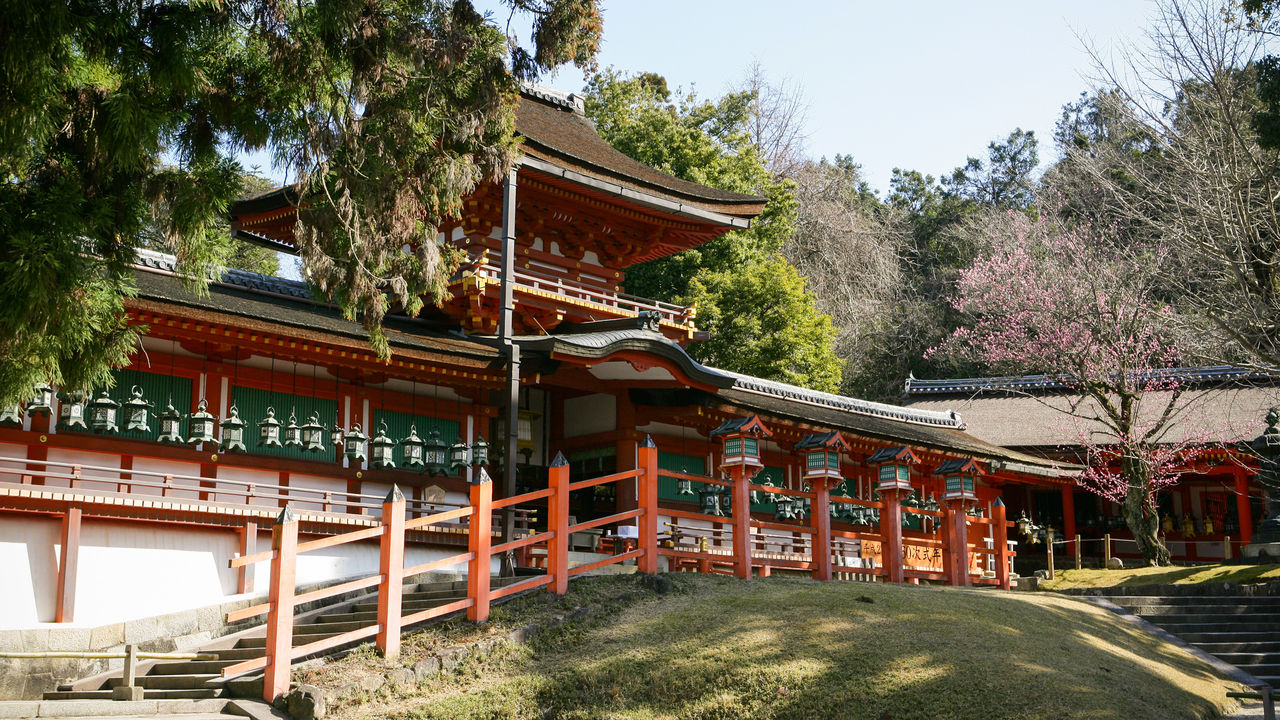 Nara’s Kasuga Shrine: A Graceful Presence with a Millennium of History

Jul 29, 2018
Part of the Historic Monuments of Ancient Nara World Heritage site, Kasuga Shrine consists of many historically and culturally important structures. Deer are viewed as messengers of the gods, and deer motifs abound on the shrine’s famous stone lanterns, fortune-telling strips, and elsewhere.

Deer: Sacred Messengers of the Kami 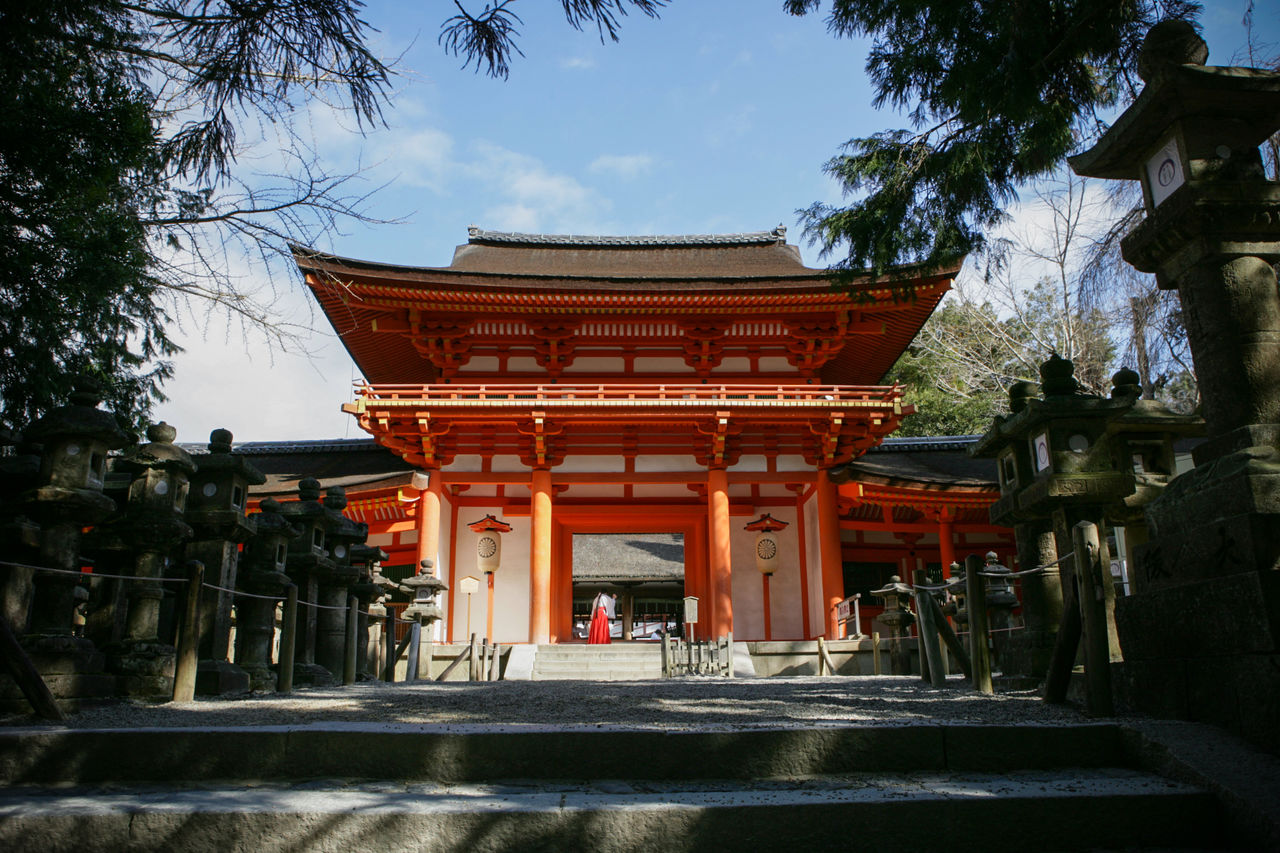 Kasuga Shrine’s principal deity, Takemikazuchi-no-mikoto, is said to have traveled from Kashima Shrine to Nara astride a white deer. Even today, herds of tame deer wander around the shrine precincts and neighboring Nara Park, a sign of the reverence in which they are held as messengers of the kami spirits. Many of the protective amulets and omikuji fortune-telling slips sold at the shrine also feature deer motifs. 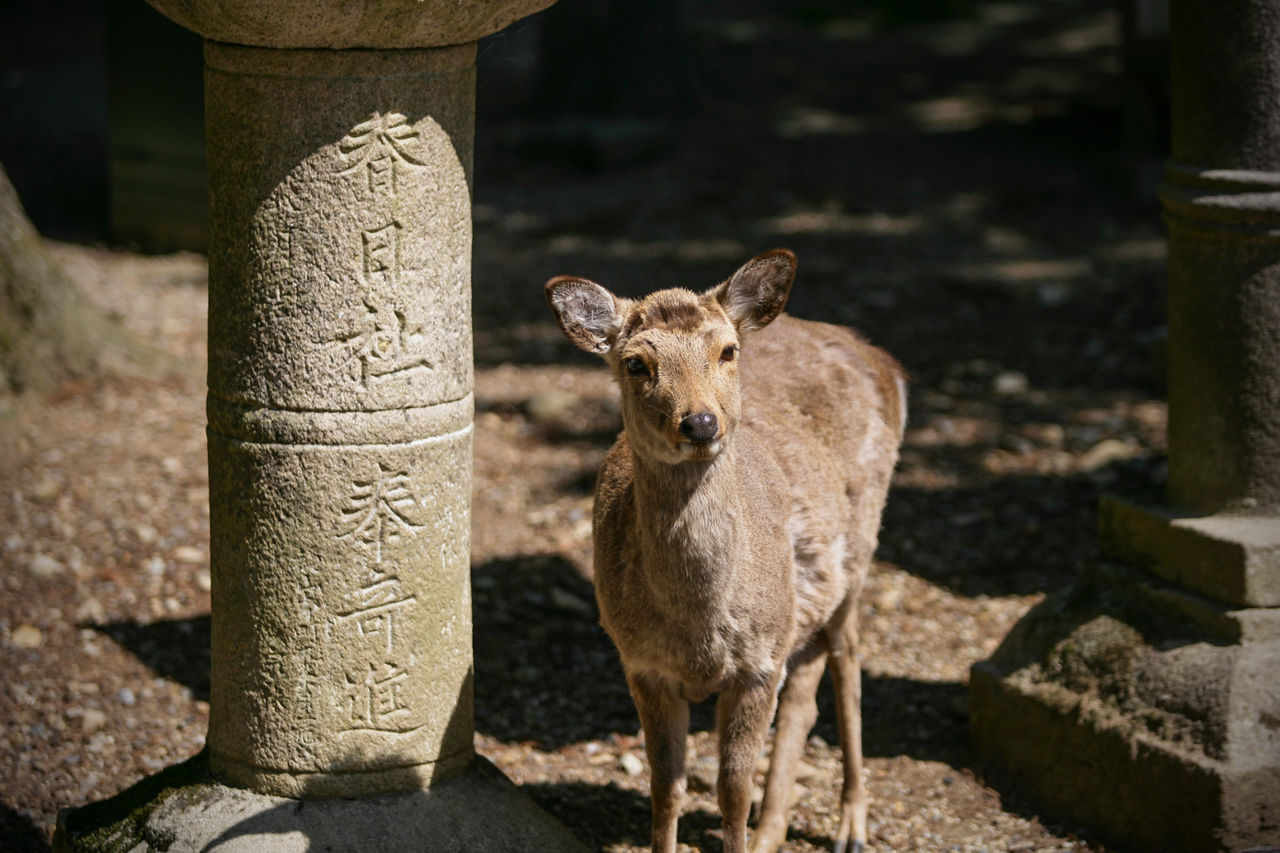 One of the shrine’s sacred deer, standing next to a stone lantern.

A Profusion of Lanterns

Many historically and culturally important buildings stand within the shrine precincts, beginning with the Main Hall, designated a National Treasure, and several other structures that are Important Cultural Properties. Kasuga Shrine is included among the Historic Monuments of Ancient Nara, inscribed as a UNESCO World Heritage site in 1998.

Kasuga Shrine is distinctive for its brilliantly colored structures. The two-story rōmon gate, the 37-meter long east corridor, the 57-meter long west corridor, and many other structures feature this vivid color. One thousand iron lanterns, donated by the faithful over nearly 800 years, hang along the corridors, while the path leading to the shrine is lined with 2,000 stone lanterns. Some of the stone lanterns are decorated with deer motifs, and visitors enjoy trying to spot them as they approach the shrine. 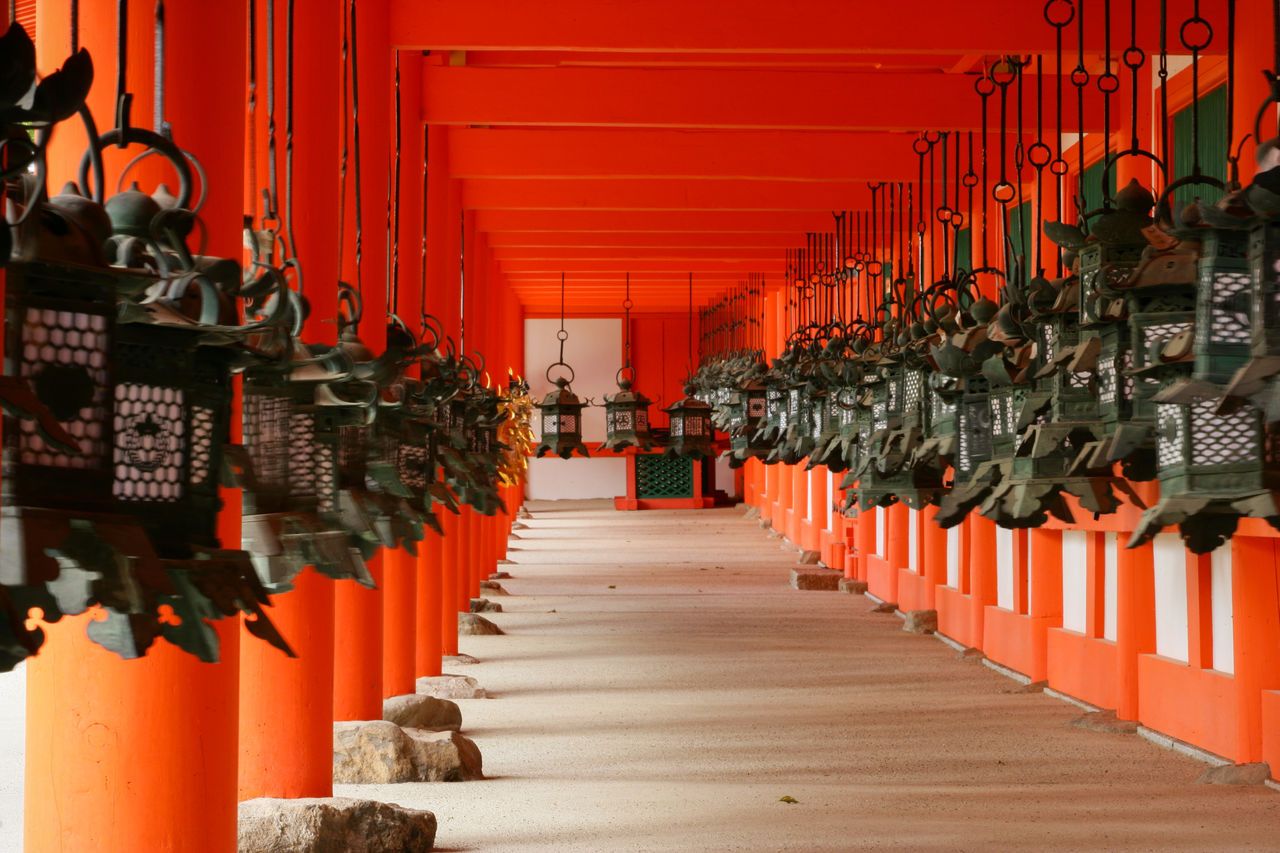 Lanterns hanging along one of the shrine’s corridors.

All the shrine’s 3,000 lanterns are lit at once for the mantōrō ceremony, which takes place twice a year, in February and August. This ceremony is popular with visitors, who flock to the shrine to view and photograph the entrancing sight of thousands of flames flickering in the dark.

The four great families that played a dominant role in Japan’s history at the time were the Taira, the Minamoto, the Fujiwara, and the Tachibana; among them, the Fujiwara family has the longest history. Fuhito’s father, Nakatomi no Kamatari, vanquished the then-powerful Soga clan and was instrumental in instituting the Taika Reforms in 645, which returned political power to the hands of the emperor. In recompense, the emperor granted Kamatari the surname of Fujiwara, marking the start of the clan of that name. 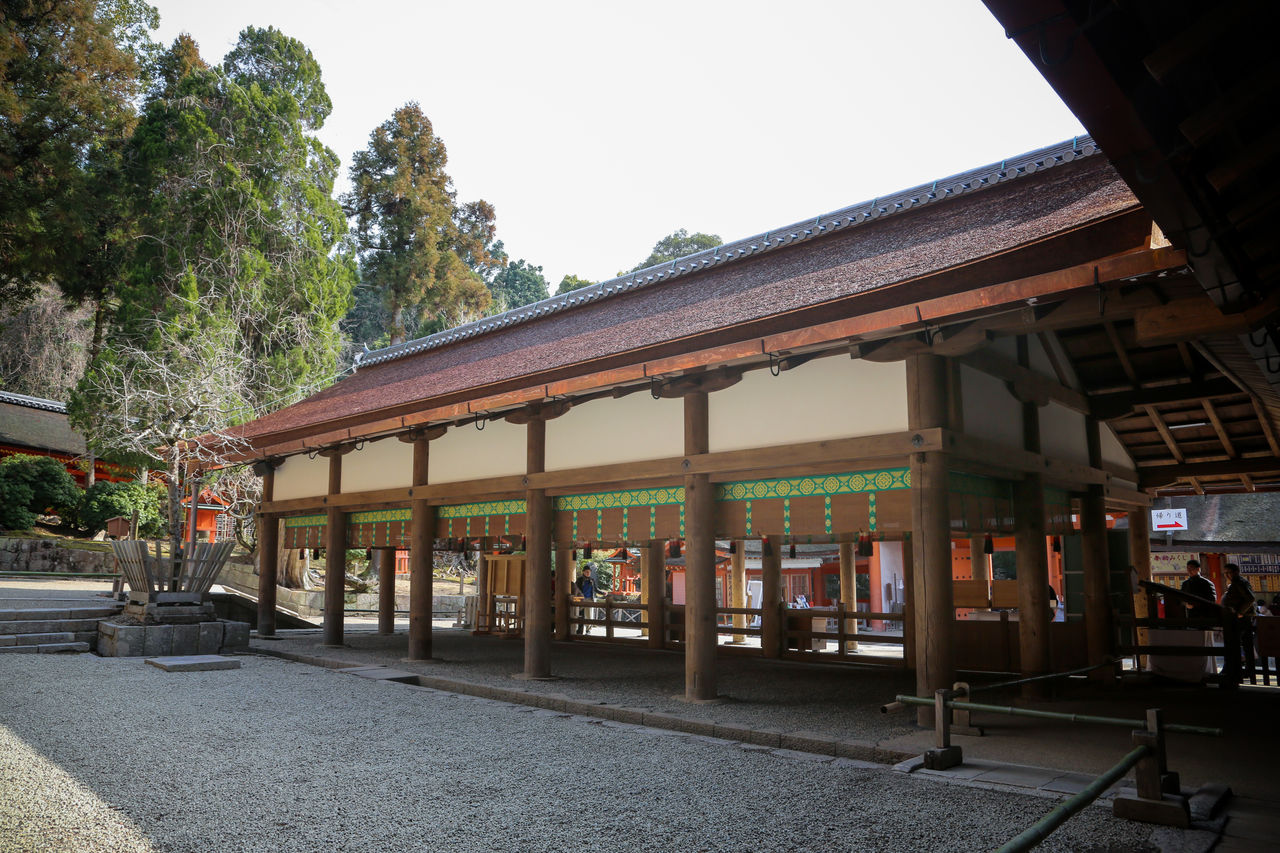 The Heiden (Hall of Offerings) and Maiden (Sacred Dance Hall) at the shrine.

Fuhito, who was Kamatari’s second son, married one of his daughters to Emperor Shōmu. He was also the maternal grandfather of Empress Kōken, one of only six female rulers until then, and the family acquired vast power through strategic marital alliances of this kind. For centuries thereafter, the Fujiwara were the power behind the throne and exercised unparalleled influence over political matters and religious rites. Fuhito was also the progenitor of the five cadet branches of the Fujiwara clan—the Konoe, the Kujō, the Nijō, the Ichijō, and the Takatsukasa families—who served as hereditary regents to the emperors. Because of Kasuga Shrine’s connection to the Fujiwara, veneration of the emperor was strong, and many subsidiary shrines, numbering some 3,000 in all, were established throughout the country. 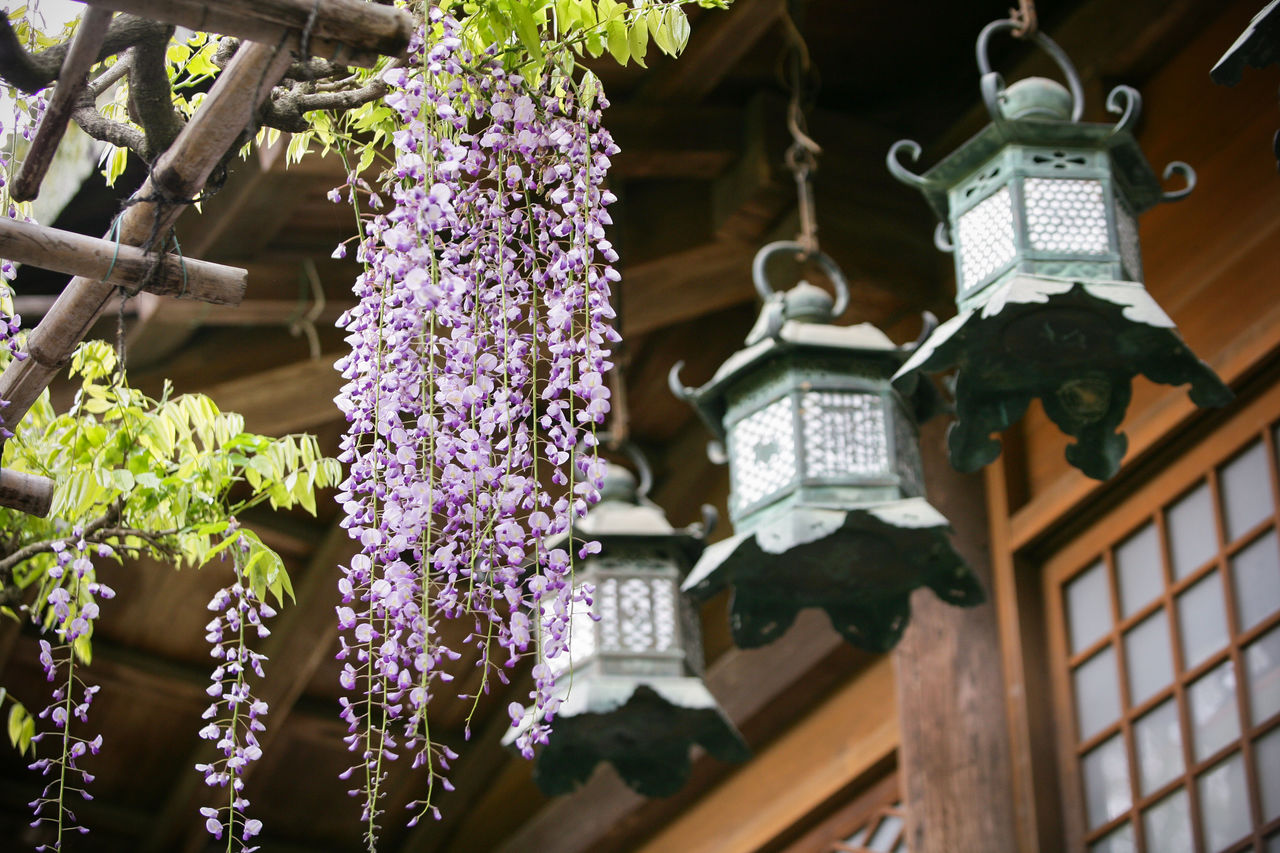 Wisteria in bloom at the shrine.