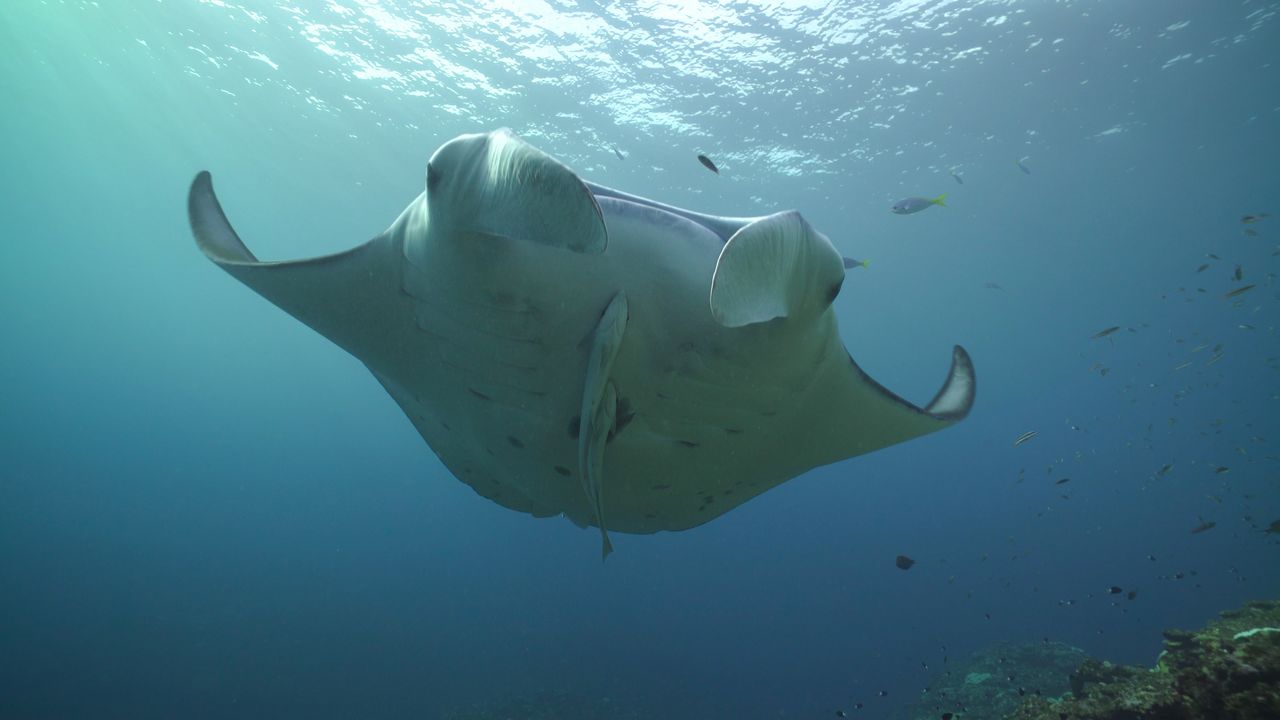 Japan Data Travel May 19, 2020
Three areas of Okinawa have been designated as national parks. While the COVID-19 crisis continues, the photos here offer an opportunity to take a virtual trip to this subtropical paradise. 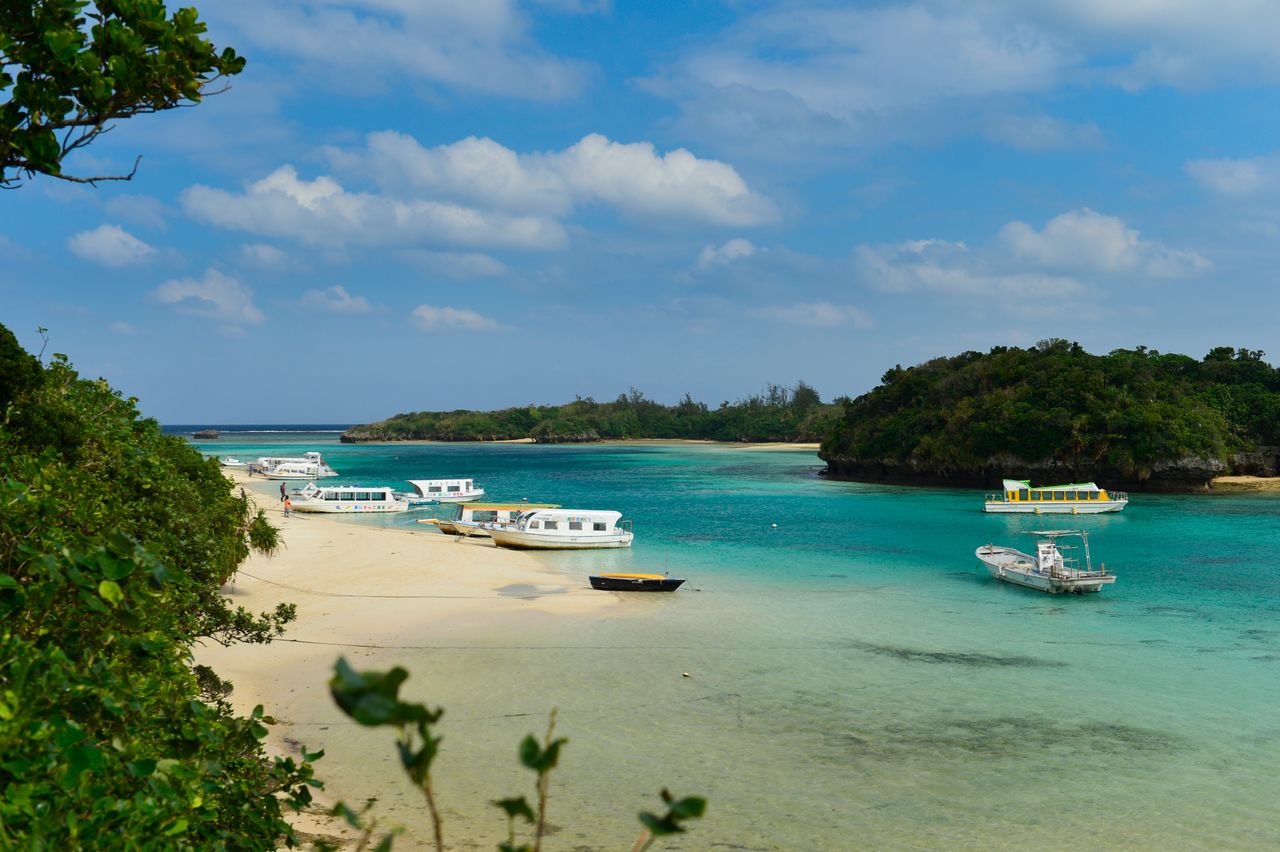 Japan’s southernmost and westernmost national park is located on the Yaeyama Islands in the southwest of Okinawa Prefecture. Iriomote National Park was designated in 1972, the year Okinawa reverted to Japanese sovereignty from the United States, and in 2007 it incorporated parts of the nearby Ishigakijima and surrounding sea. The park’s greatest attractions are the primeval forests of mangrove trees and the coral reefs.

Japan’s largest mangrove forest, a government-designated natural monument, stretches out beside the Nakama River on the island of Iriomotejima. The Nagura Anparu tidal flat along the Nagura River is a famous spot for observing migrating wild birds, and is registered under the Ramsar Convention on Wetlands, The lofty Yaeyama palm tree, which grows to a height of 15 to 20 meters, is a species only found on Ishigakijima and Iriomotejima. 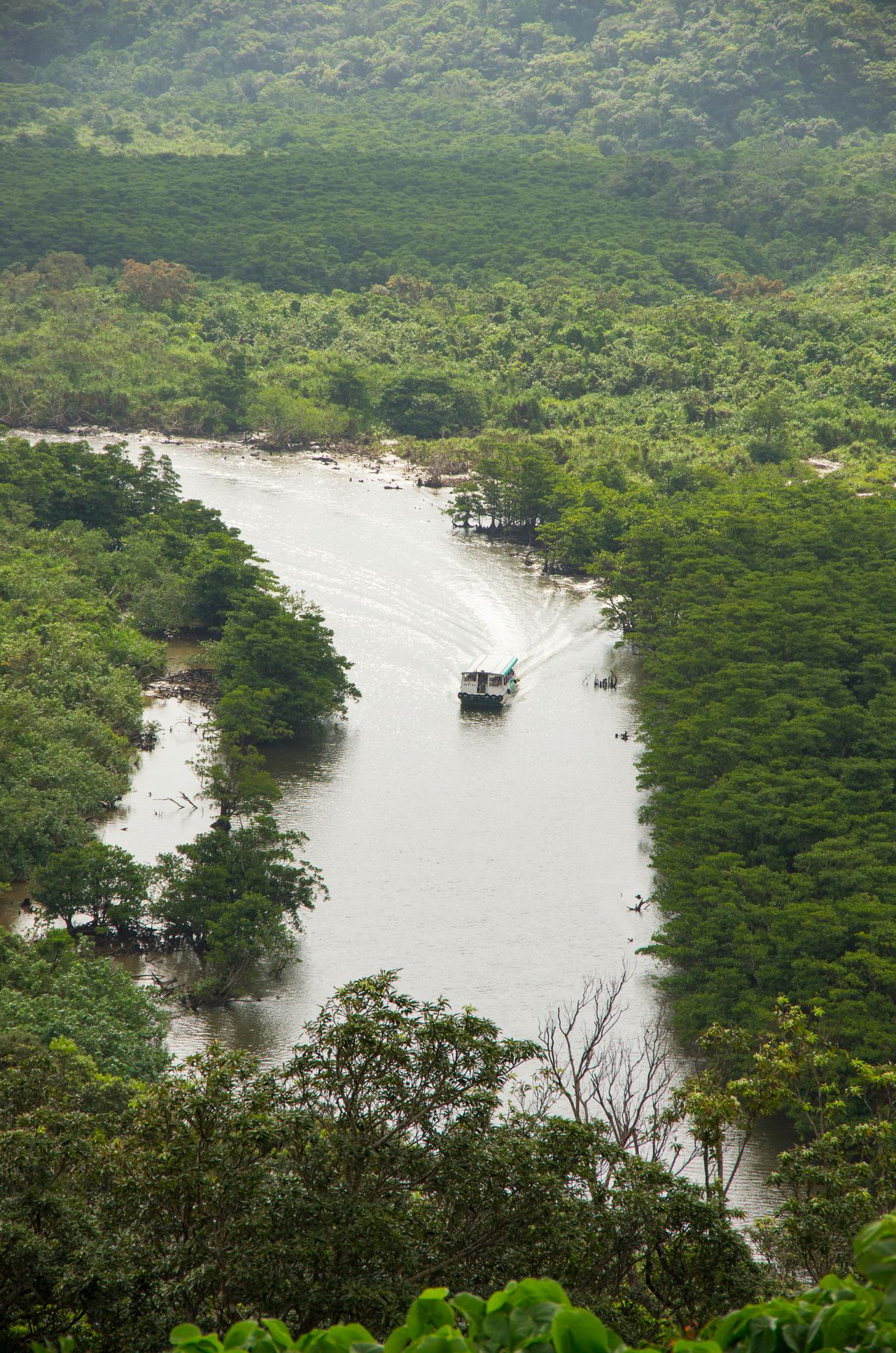 A cruise on the Nakama River beside the mangrove forest. (Courtesy OCVB) 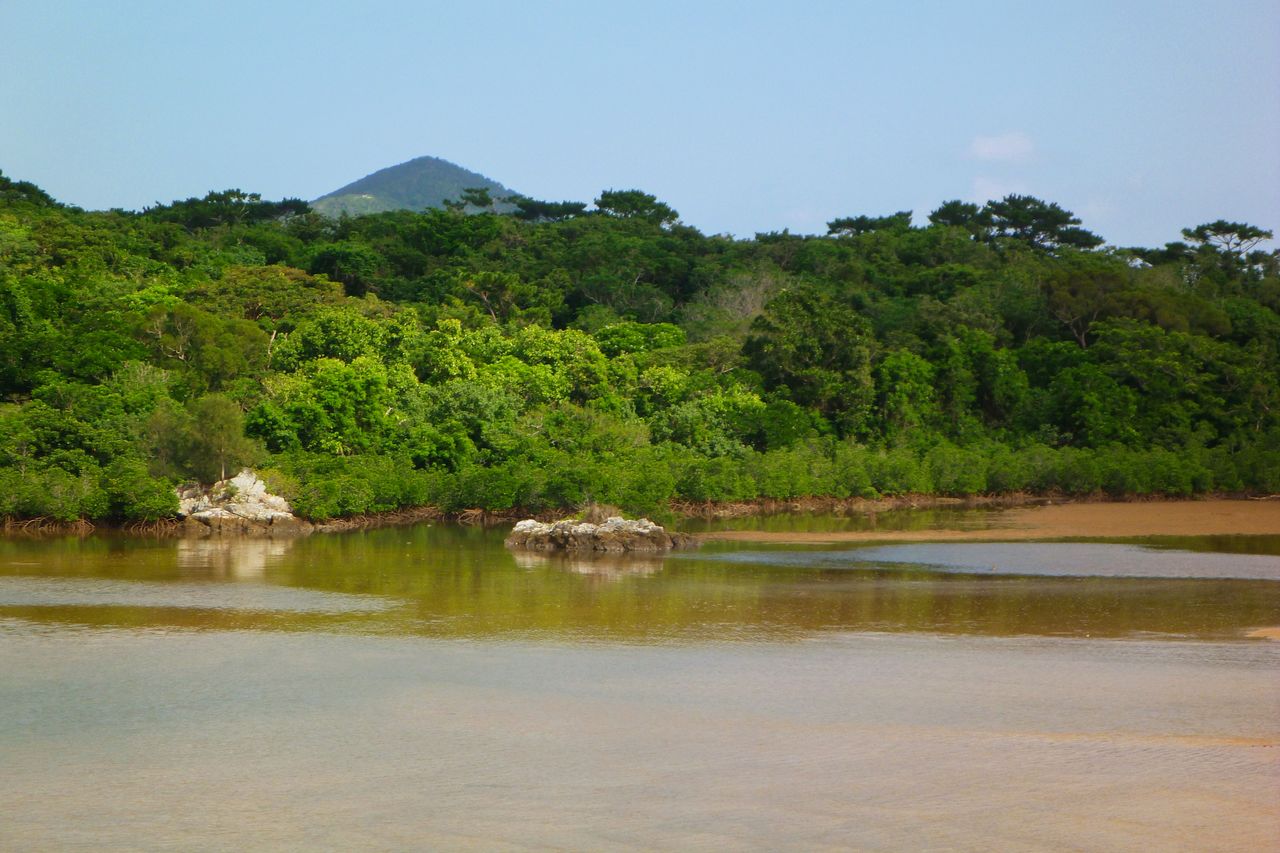 The greatest attraction for tourists of the area is the clear, emerald blue ocean. Japan’s largest coral reef area, Sekiseishō lagoon, located between Iriomotejima and Ishigakijima is a snorkeling paradise. Other popular spots include Kabira Bay, awarded three stars by the Michelin Green Guide, and the uninhabited coral reefs of Barasu Island, as well as the stunning view of the lagoon from atop Mount Omoto, the highest peak in Okinawa. 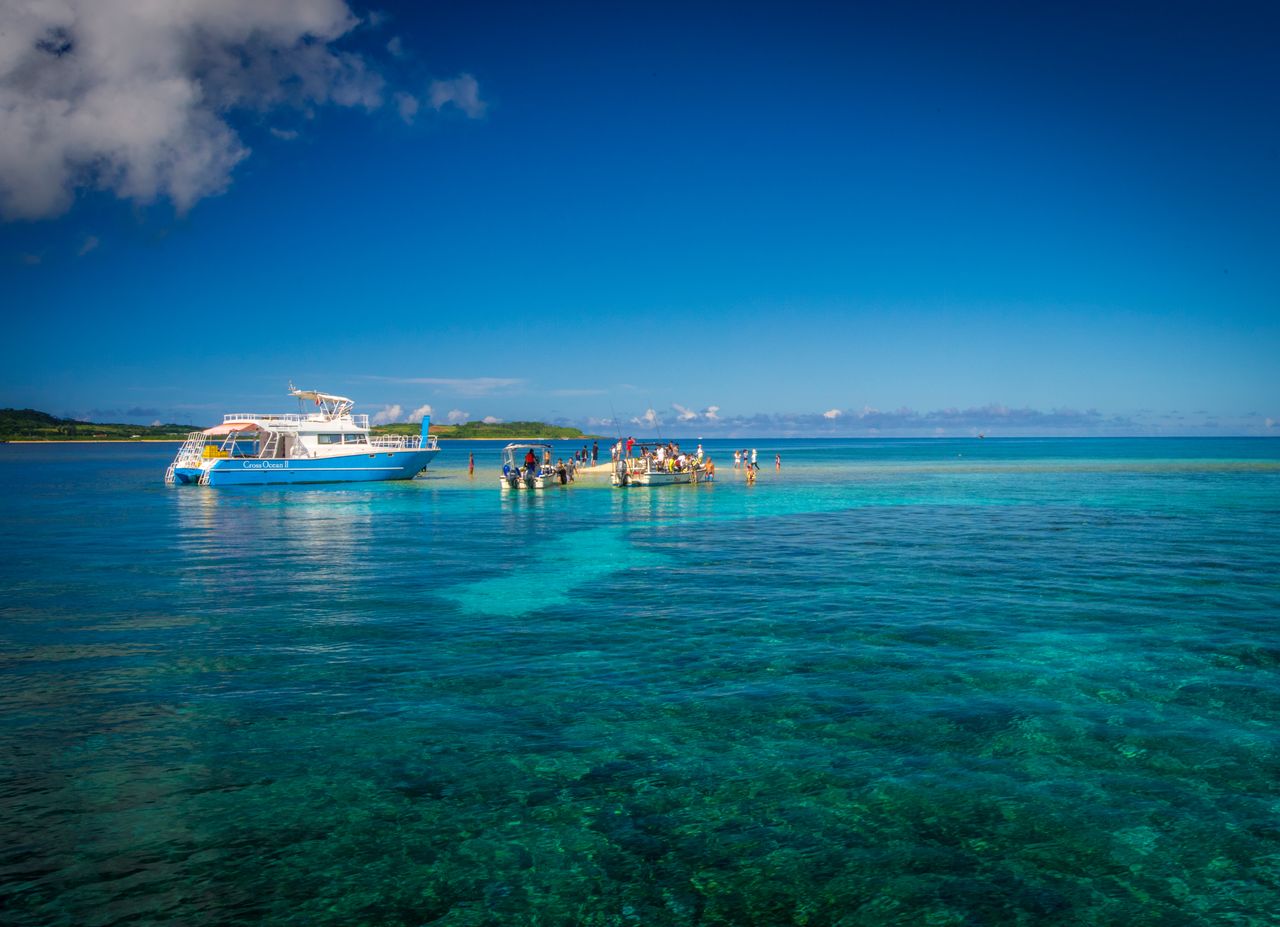 Barasu Island, formed from pieces of coral, is a popular attraction for snorkelers. (Courtesy OCVB)

Animals only found in local habitats include the Iriomote cat and crested serpent eagle. The community on the small island of Taketomijima preserves the traditional Okinawan townscape. Visitors can take a trip on a water buffalo cart along the white sand path that runs beside walls made of Ryūkyū limestone. 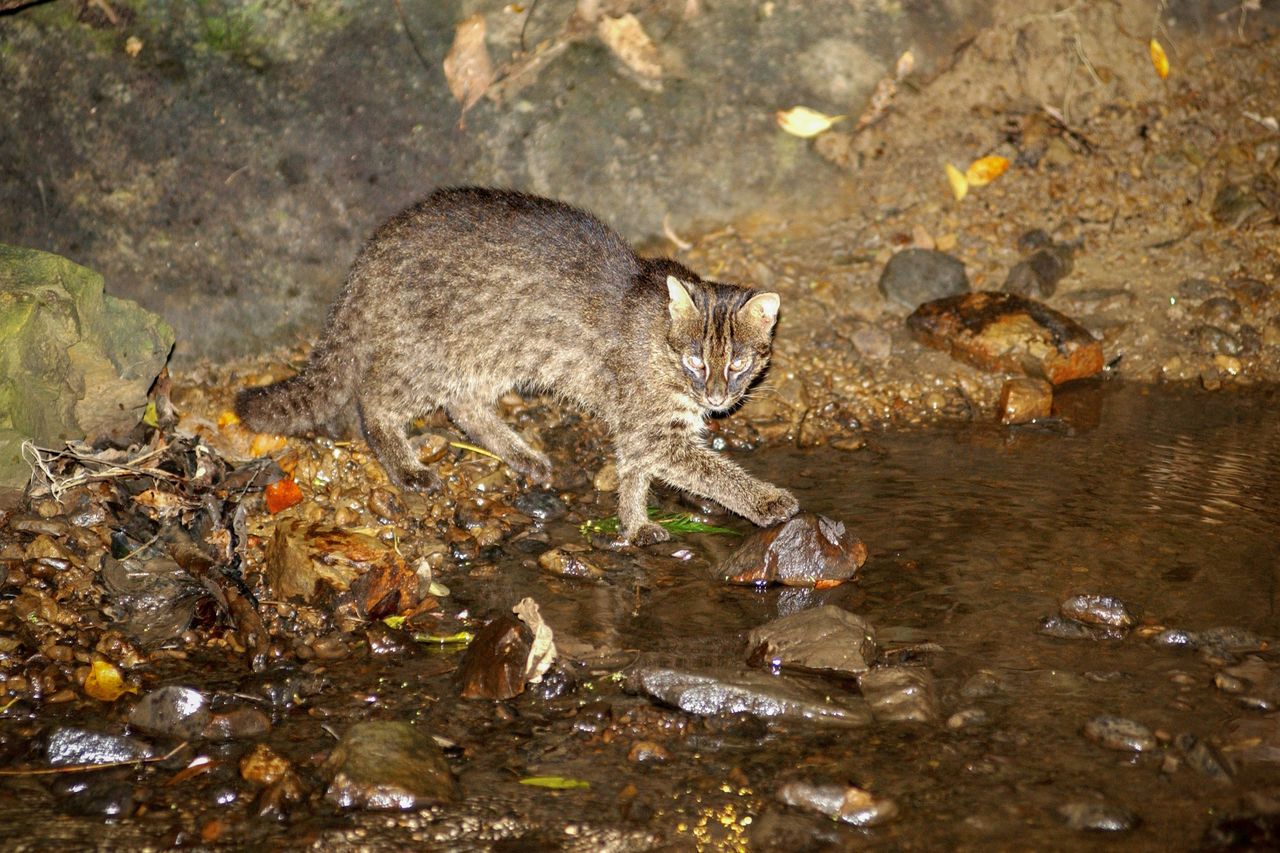 The Iriomote cat, which is only found on Iriomotejima. (Courtesy OCVB) 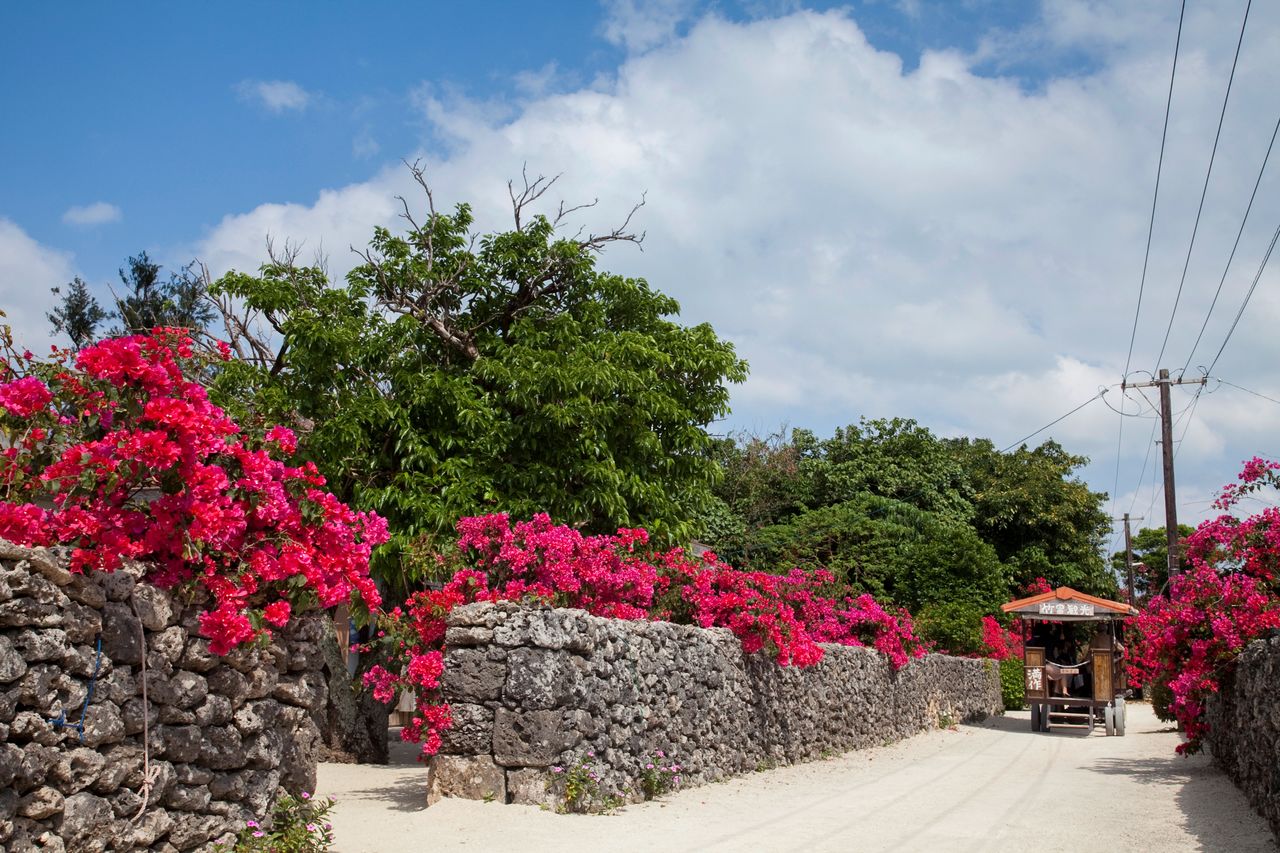 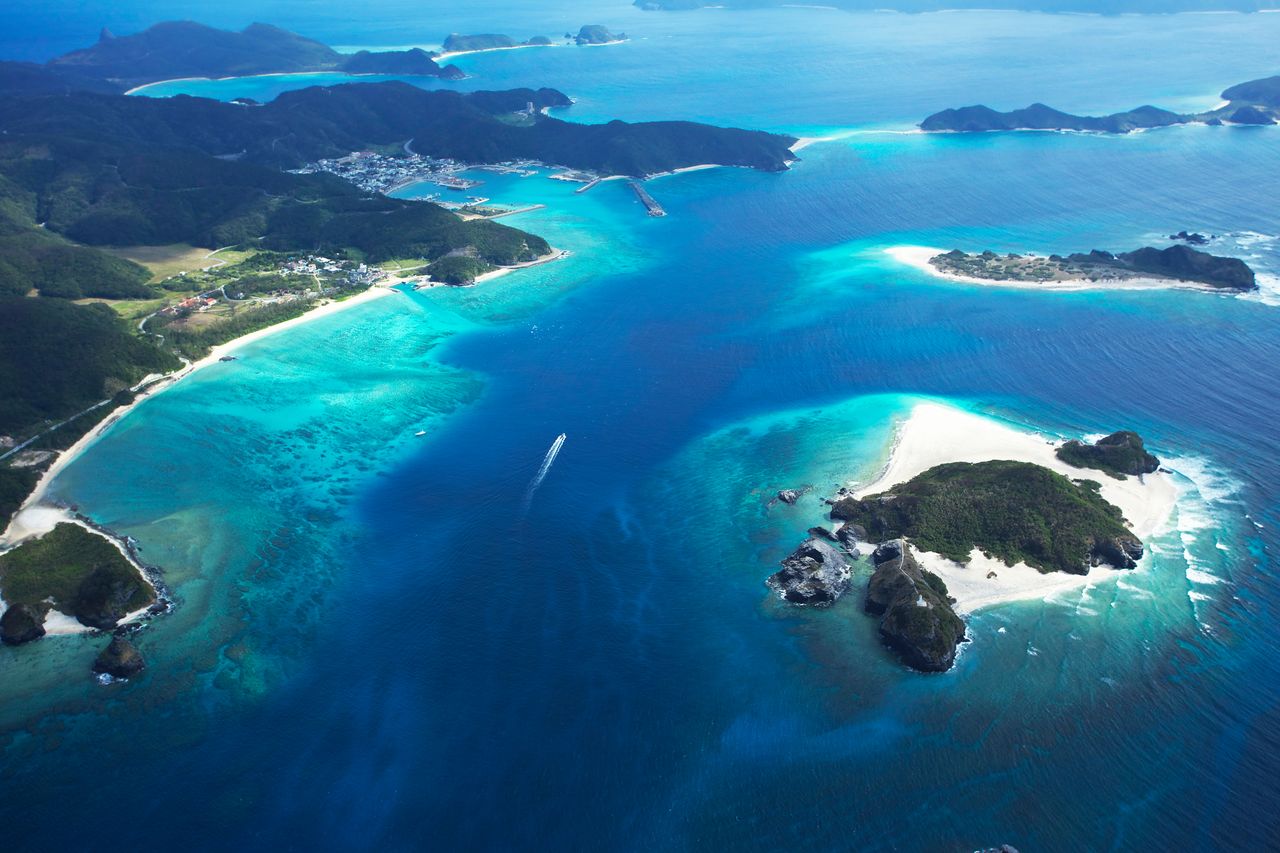 The Kerama Islands are a chain of around 30 large and small islands located in the East China Sea, west of the main island of Okinawa, about 40 kilometers from the city of Naha. Their name derives from the Okinawan dialect word kirama, which means a glittering and beautiful place. The largest island in the chain is Tokashikijima, and uninhabited islands are interspersed among Zamamijima, Akajima, Gerumajima, and Maejima.

The clear ocean waters are a vivid color that has been dubbed “Kerama blue.” As a breeding area for humpback whales, the island chain is an attractive spot for whale watchers. It is also known for beautiful white sand beaches, most notably Furuzamami Beach on Zamamijima island, which is rated two stars in the Michelin Green Guide. 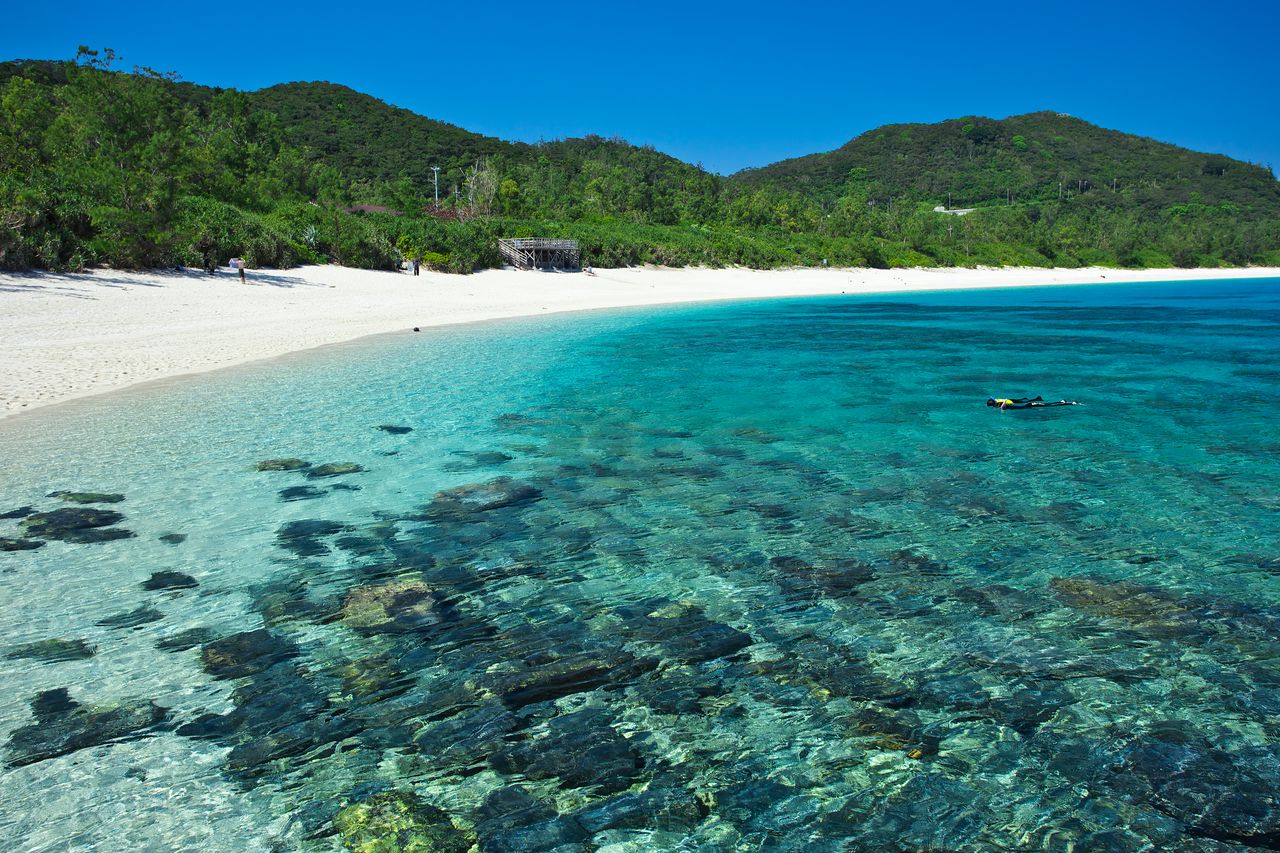 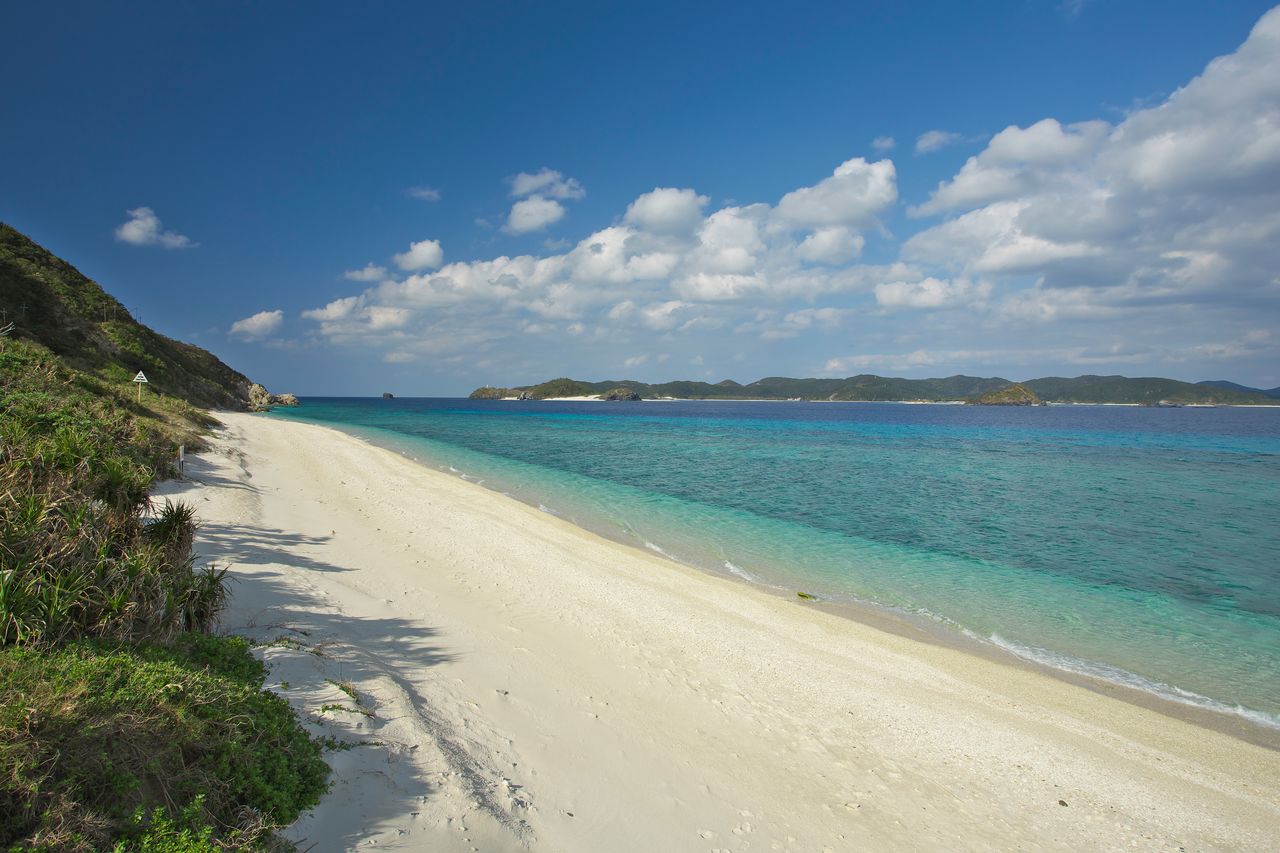 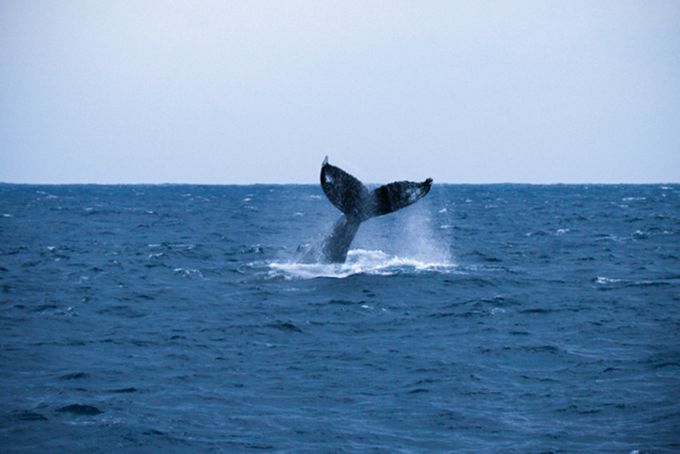 From the observatories located on the islands, visitors can view hunchback whales. (Courtesy Ministry of the Environment)

It is thought that the large and small Kerama Islands were formed when mountain ranges connected to the main island of Okinawa sank due to tectonic movement. For this reason, it is possible to see steep sea cliffs and beautiful views of the archipelago from the observatories located on the islands.

Long ago, the islands were a trade junction between the Ryūkyū Kingdom and the Qing Dynasty in China. During World War II, US forces made their first landing in Okinawa here. Today many aspects of the unique local culture remain, including historic sites and traditional festivals. 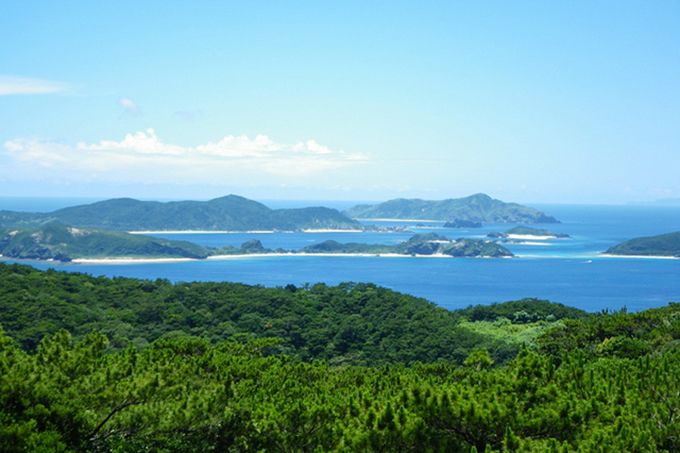 On the grounds of the National Okinawa Youth Friendship Center, housed in facilities once used by the US Army, is the Akamayama Observatory, the most scenic spot on Tokashikijima. (Courtesy Ministry of the Environment) 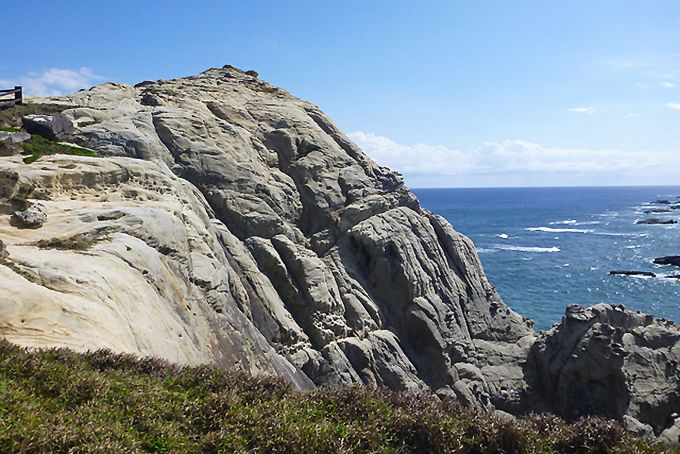 At the southern tip of Tokashikijima is Aharen Observatory, offering magnificent views of the ocean and cliffs. (Courtesy Ministry of the Environment) 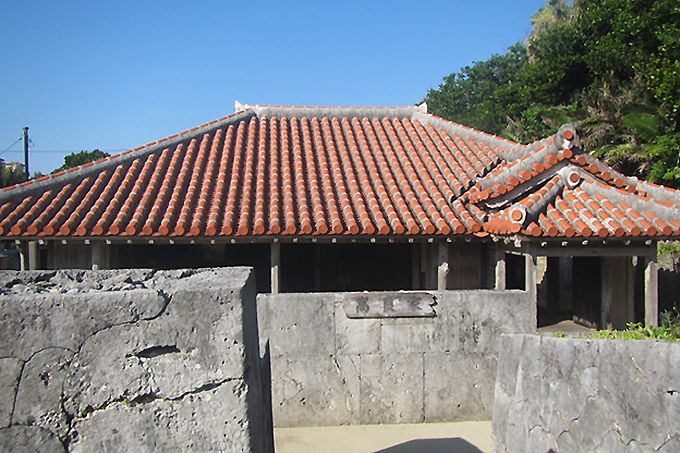 The Takara residence on Zamamijima, once inhabited by the captain of a ship that conducted trade with the Qing Dynasty. (Courtesy Ministry of the Environment) 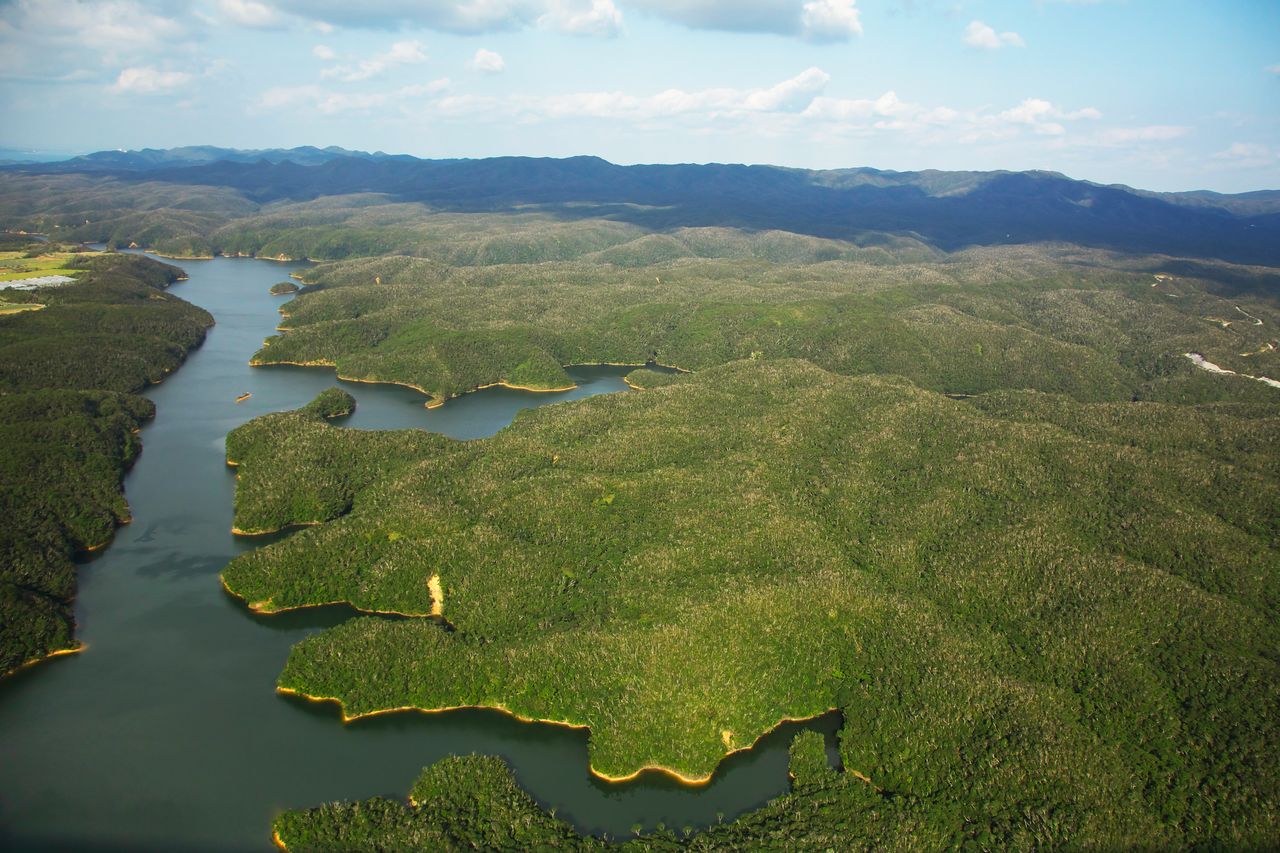 A view of the expansive Yanbaru National Park on the main island of Okinawa. (Courtesy OCVB)

Yanbaru, which literally means “mountain and fields,” is the name for the northern part of the main island of Okinawa. Unlike the southern part of the island, which centers on Naha and is quite urban, Yanbaru has a range of mountains north of the city of Nago, with the largest subtropical evergreen forest in Japan. Trees cover around 80% of the area, creating a magnificent natural landscape with rich flora and fauna.

Around half of the bird species that inhabit Japan can be found in Yanbaru, including the endangered Okinawa rail and the Okinawa woodpecker, which is the prefectural bird. 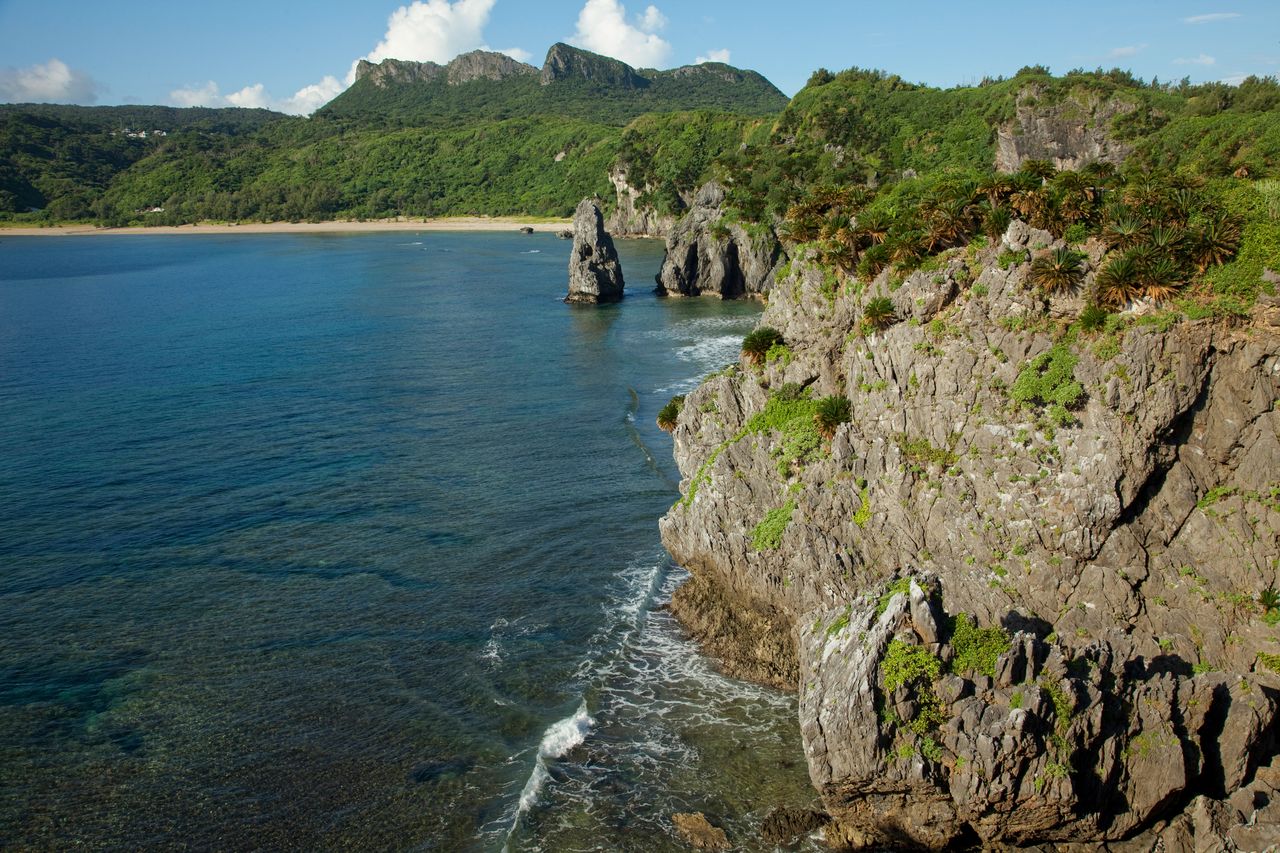 Cape Hedo, the northernmost point of the main island of Okinawa, has views of splendid sea cliffs. (Courtesy OCVB) 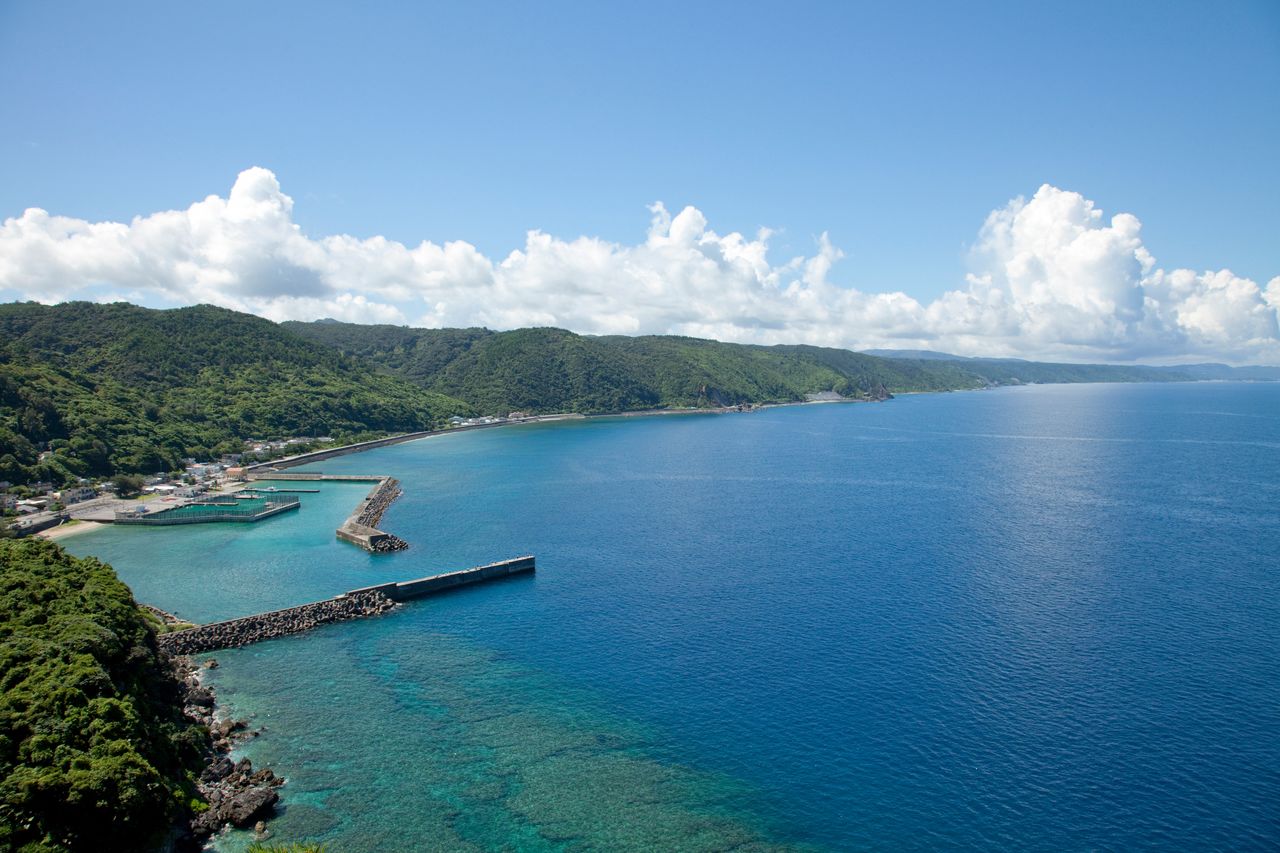 The spectacular view of the sea and ocean from the observatory on the Kayauchi-banta cliff. (Courtesy OCVB) 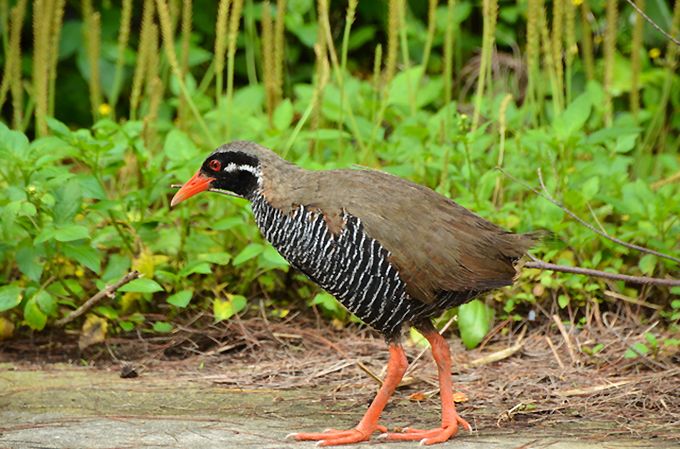 The Okinawa rail, a flightless bird is found in the national park. (Courtesy Ministry of the Environment)

Tropical beach resorts used to be the mainstay for tourism on the main island of Okinawa, but in recent years it has become increasingly popular to enjoy “Yanbaru sightseeing,” taking in the combination of the ocean and verdant forests. Visitors can take the walking course in Kunigami Forest Park or trek on a course located on Mount Daisekirin located near Cape Hedo, composed of limestone cliffs.

The attractive rivers in the area pass through subtropical forests and mangrove forests. Popular activities for visitors include hiking along the river up to the Tātaki waterfall and kayaking through the mangroves on Gesashi River. 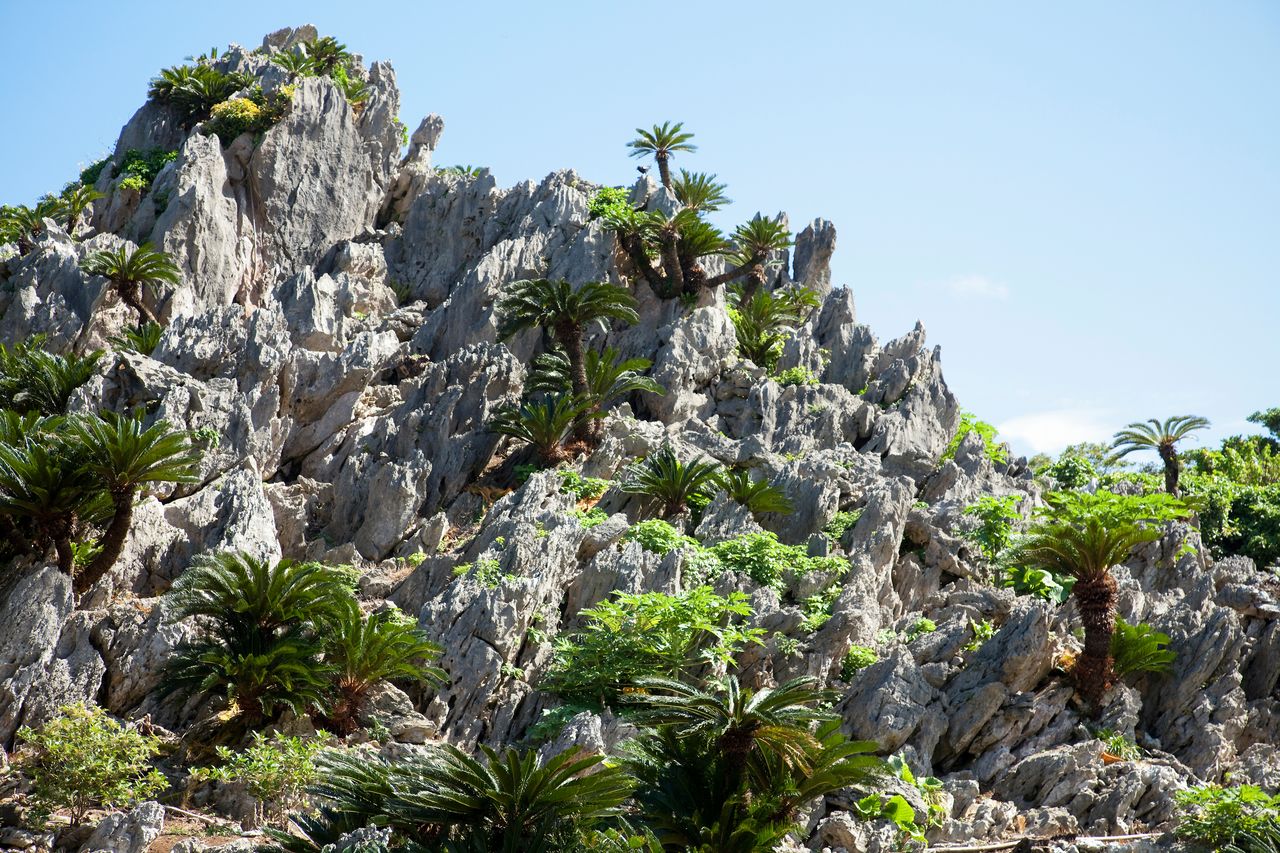 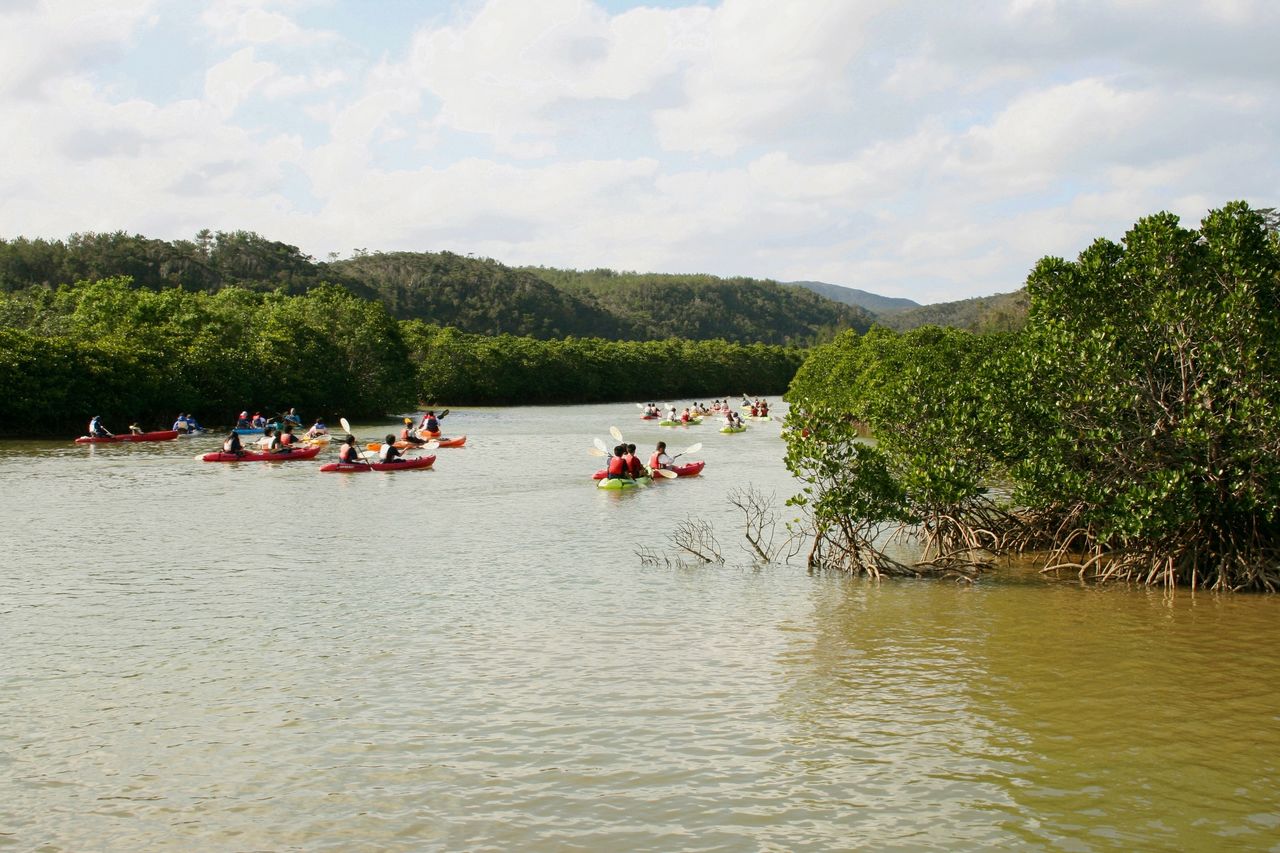 Visitors can enjoy the view from kayaks of trees in the Hirugi Forest, about a kilometer from Gesashi Bay. (Courtesy OCVB) 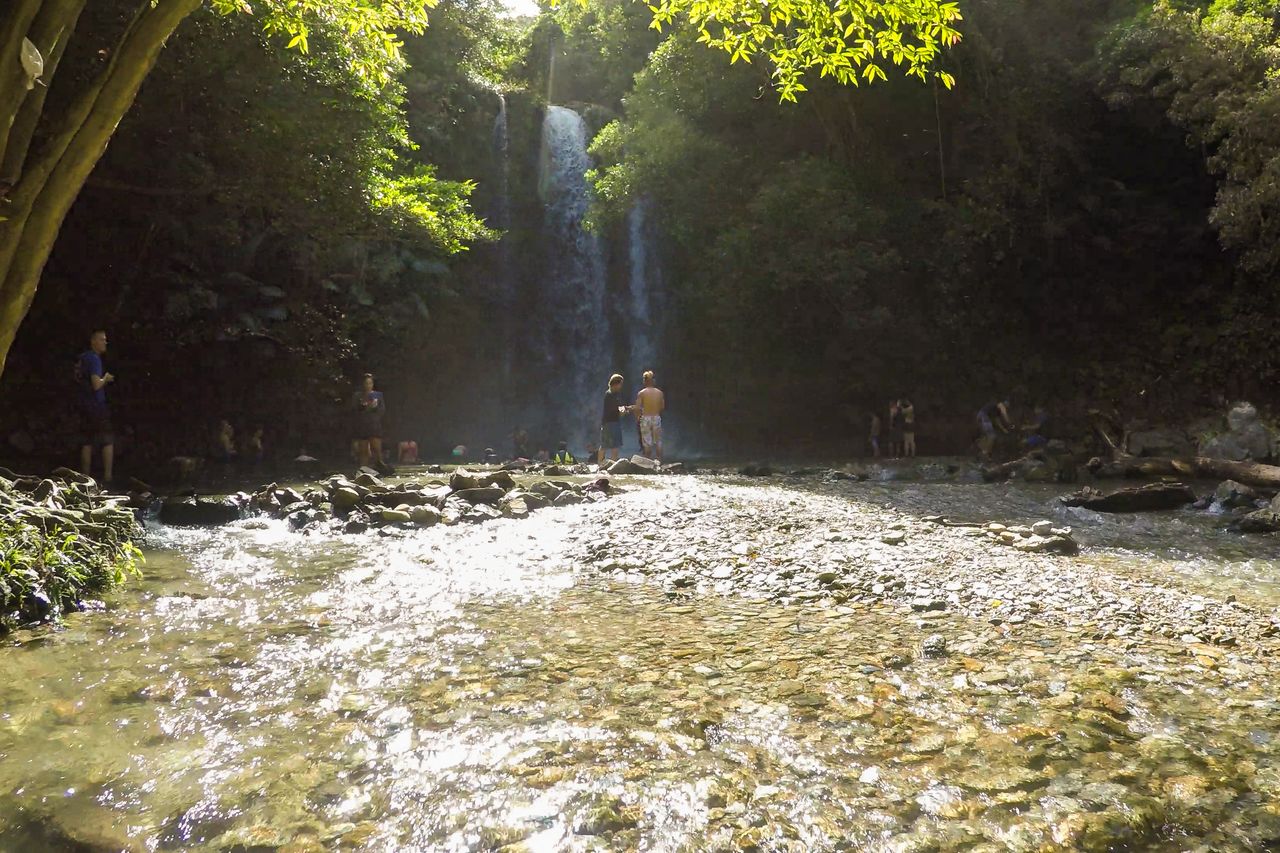 In the water underneath the 10-meter Tātaki waterfall. (Courtesy OCVB)

In Okinawa visitors can encounter festivals and events that retain a strong flavor of the traditional Ryūkyū culture that has been handed down in each area. We hope that after the COVID-19 pandemic you will have the chance to time a visit to coincide with a local festival and fully experience the charms Okinawa has to offer. 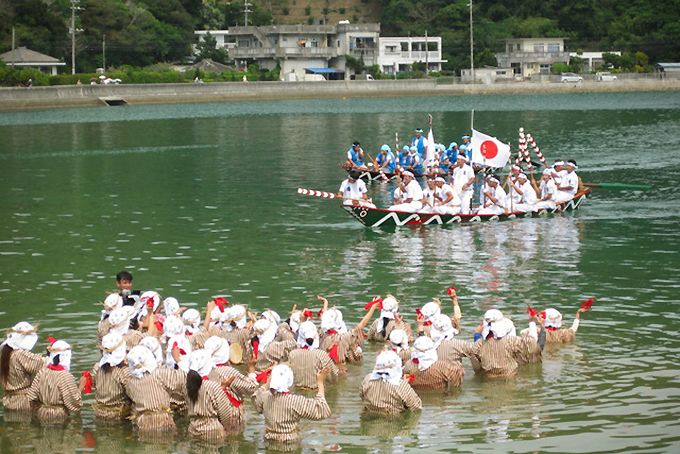 The Ungami (sea god) festival in Shioya Bay; the festival is to pray for a good harvest and no disease or disasters. (Courtesy Ministry of the Environment)