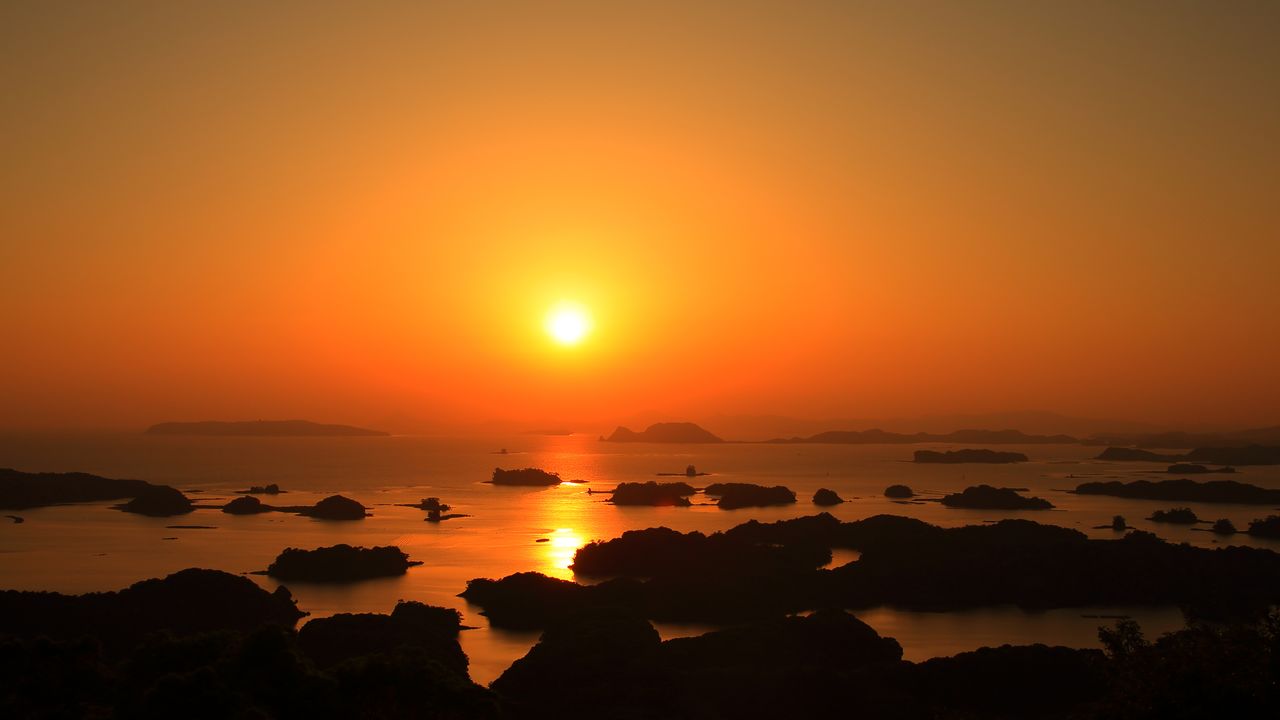 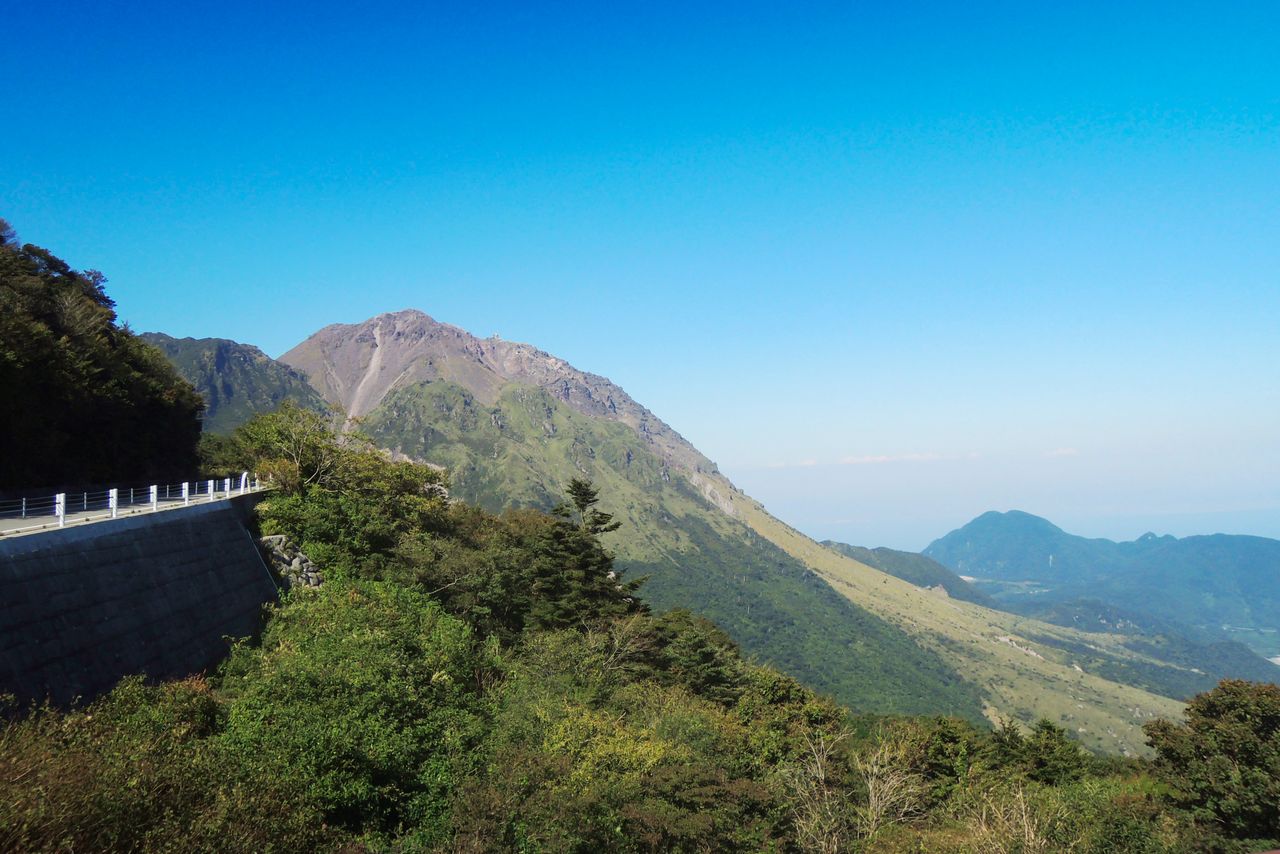 Unzen National Park was established in 1934 as one of Japan’s first national reserves. In 1956, the Amakusa region in Kumamoto Prefecture was added to form the Unzen-Amakusa National Park. Visitors can enjoy a range of stirring landscapes, including Mount Unzen with its steaming hot spring resorts, the rugged coastline of the Shimabara Peninsula, and picturesque Amakusa and other islands in the Yatsushiro Sea.

Mount Unzen on the Shimabara Peninsula is surrounded by a cluster of more than 20 volcanic peaks. In the early 1990s, one of these, Fugen-dake, rumbled to life, triggering deadly pyroclastic flows and pushing out a giant lava dome that created what is now the highest peak, the 1,483-meter Heisei Shinzan. Setting at the top of the peninsula, the mountain offers ample opportunity to admire the surrounding rugged landscape and the deep blue sea. The Unzen hot springs, with its volcanic vents billowing white fumes, is also a favorite trekking spot. 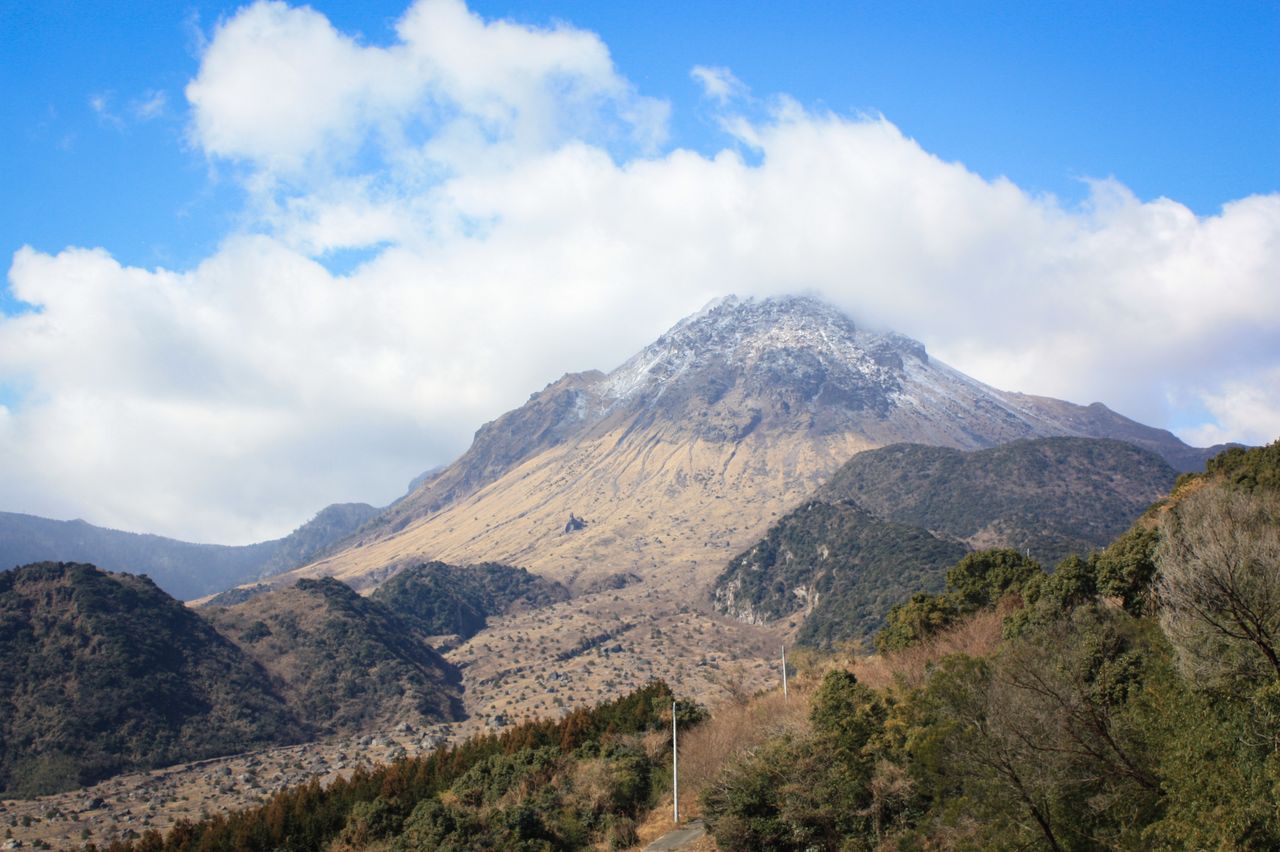 Heisei Shinzan, the highest peak in the Unzen range, formed from a lava dome just a quarter of a century ago. (Courtesy Kyūshū Tourism Promotion Organization) 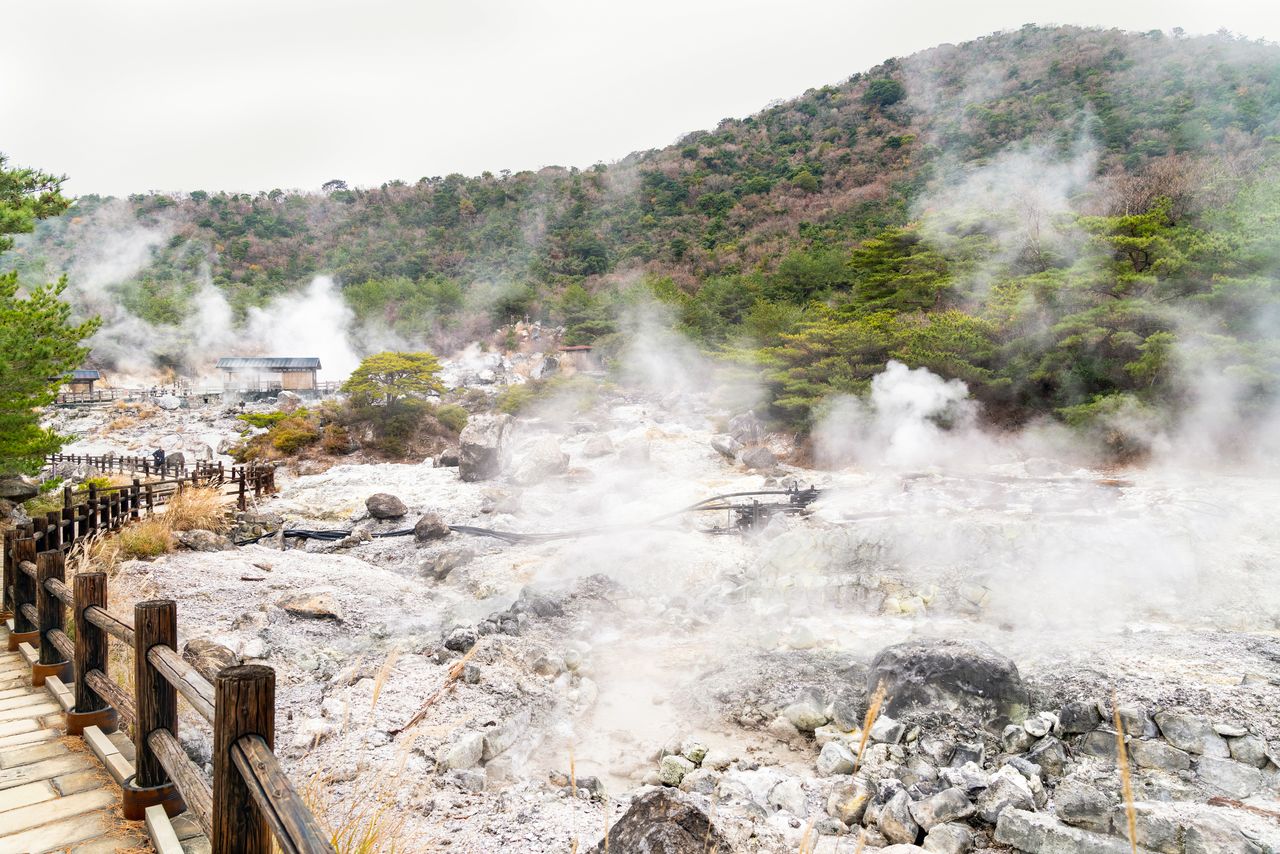 There are more than 30 hot springs near Mount Unzen, most of which are known colloquially as jigoku, or “hells,” for their habit of spewing out steam reeking of sulfur. (© Pixta)

Southeast of the Shimabara Peninsula are the islands of Ōyanojima and Kamishima. Nearby are a group of scenic islets collectively known as the “Matsushima of Amakusa” for their resemblance to the famed site in Miyagi Prefecture. The area boasts a richly varied coastline and waters teaming with beautiful corals. Visitors can take boats to watch the Indo-Pacific Bottlenose Dolphin, which traverse the sea between Shimoshima and the Shimabara Peninsula.

Amakusa and Shimabara have both earned designation as geoparks. Amakusa is one of several areas where in the past hidden Christians continued to practice their forbidden faith. Many of the historical churches and other locations are UNESCO World Heritage sites. It is also where the Shimabara Rebellion and other uprisings took place during the early Edo period. 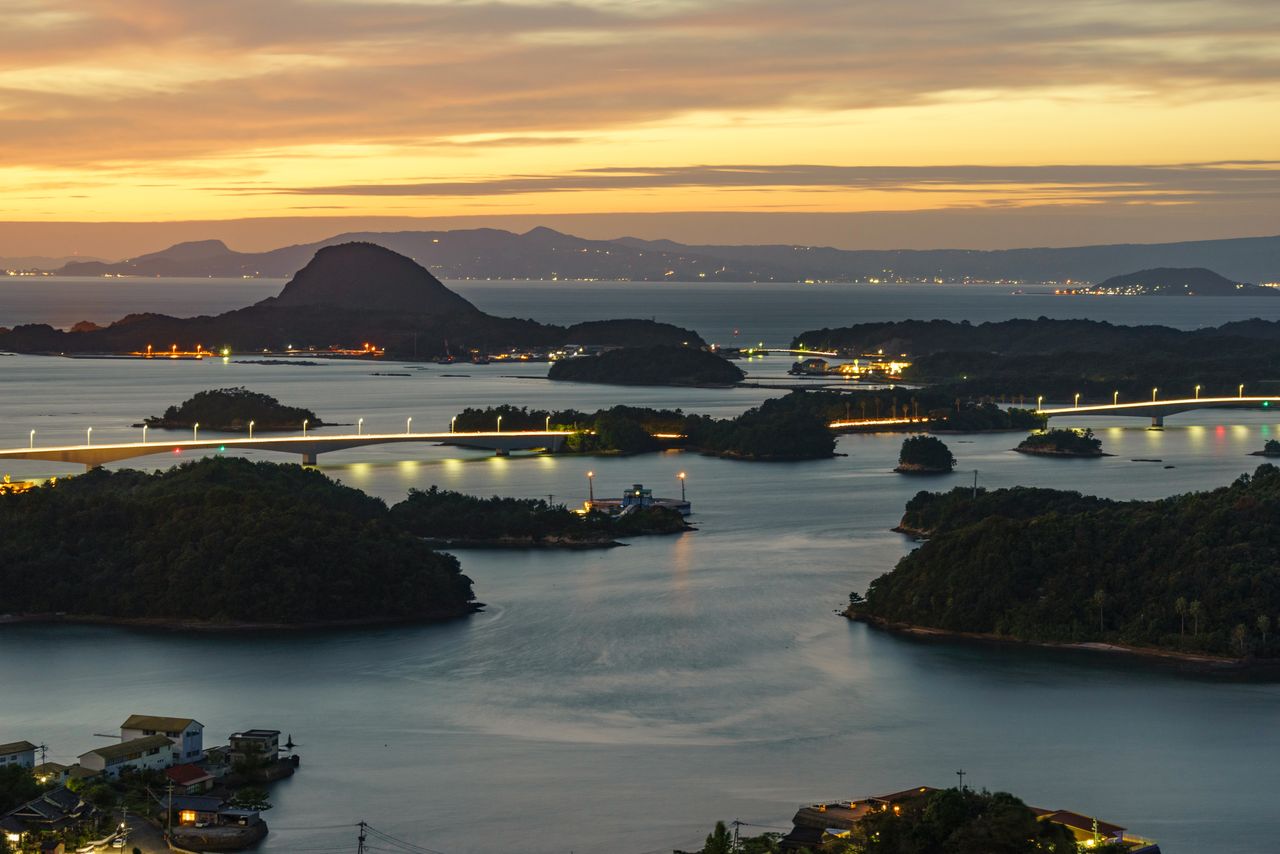 Sunset over “Amakusa Matsushima,” as seen from the Takabutoyama observation point on Kamishima. (© Pixta) 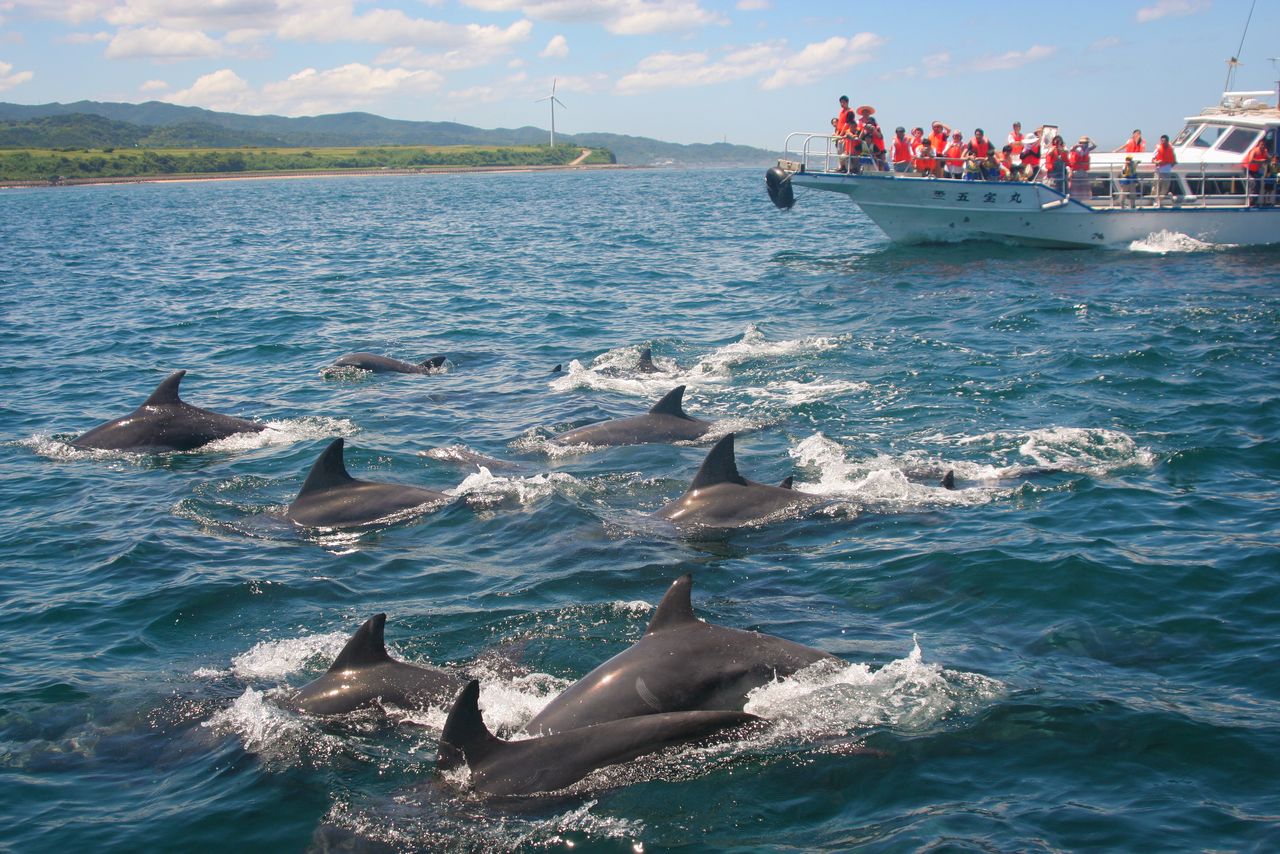 It is possible to spot dolphins year round in the Hayasaki Straits between Minami Shimabara and Shimoshima. (Courtesy Kyūshū Tourism Promotion Organization) 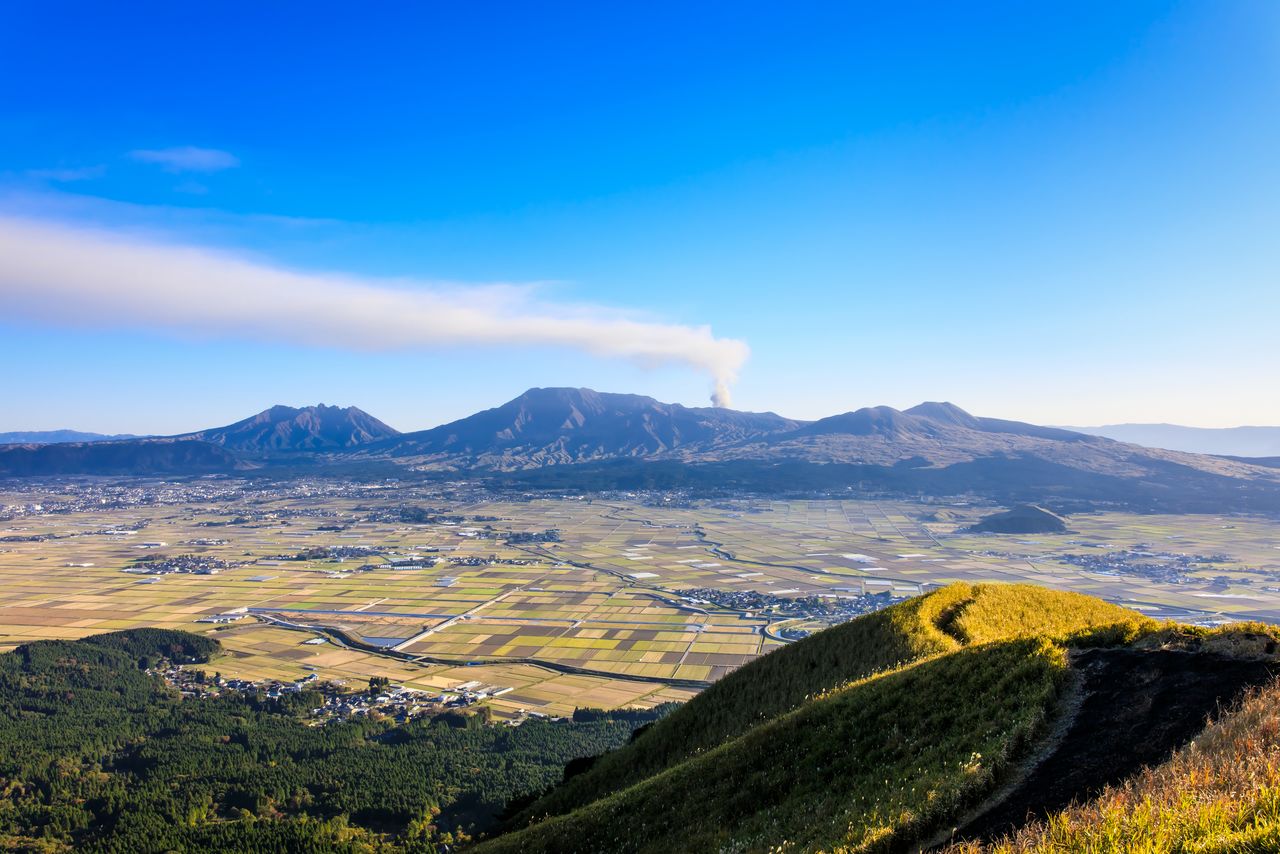 Daikanbō-dake, one of several peaks on Mount Kitagairin, offers a panoramic view distant pinnacles and rice paddies in the sprawling caldera of Mount Aso. (© Pixta)

The park encompasses Mount Aso, with its immense caldera, the Kujū mountain range, Mount Yufu, and the verdant highlands of Mount Tsurumi. The Yamanami Highway is a popular scenic drive linking Aso and Beppu City, via the Kujū mountains. The area’s highlands and marshland offer excellent hiking, and its many hot springs are a regular tourist draw.

Mount Aso’s caldera stretches 25 kilometers north to south, 18 kilometers east to west, and contains the five peaks of Taka-dake, Naka-dake, Neko-dake, Kishima-dake, and Eboshi-dake. Visitors to Naka-dake can enjoy the rare experience of gazing into a smoldering volcanic crater. Nearby are the beautiful landscapes of Kusasenrigahama, cone-shaped dormant peaks like Komezuka, and stunning natural views along the outer rim of the crater. 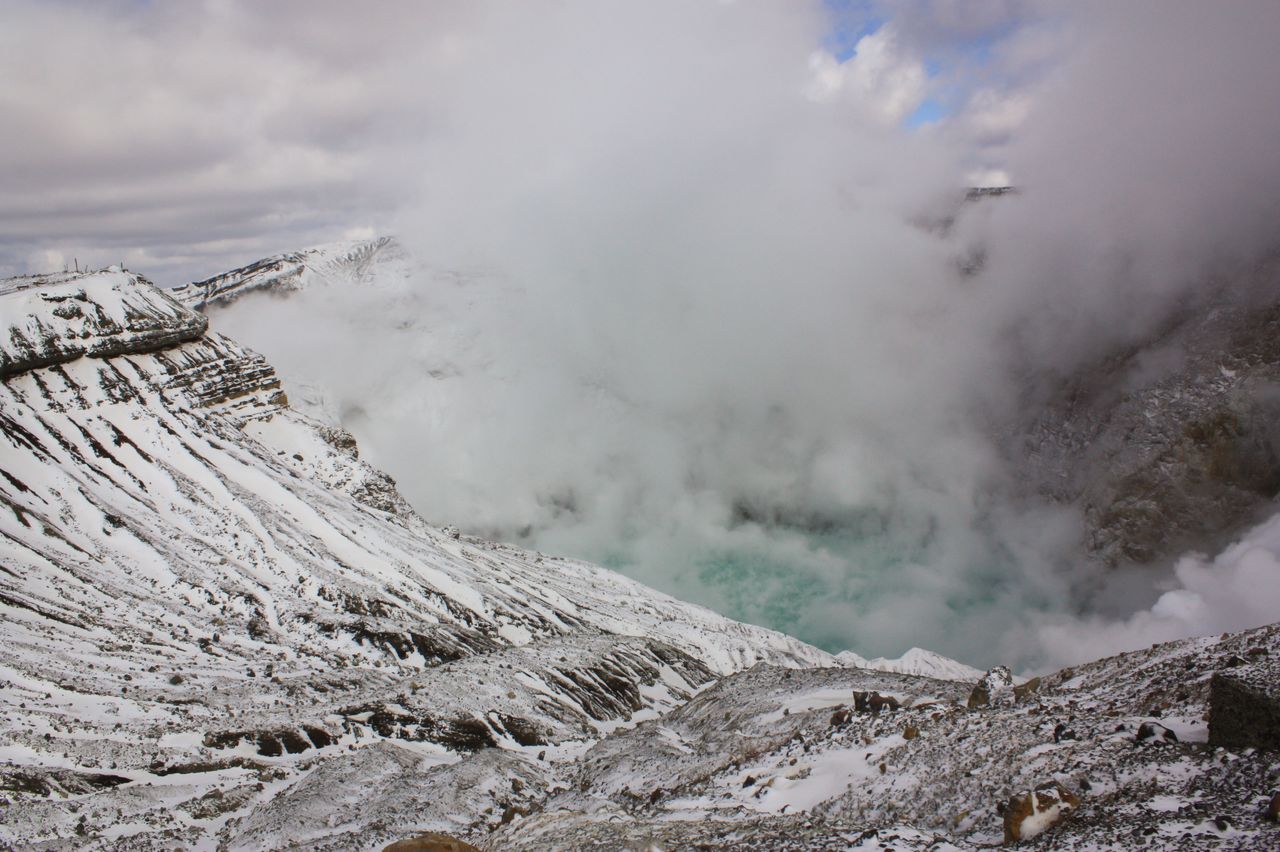 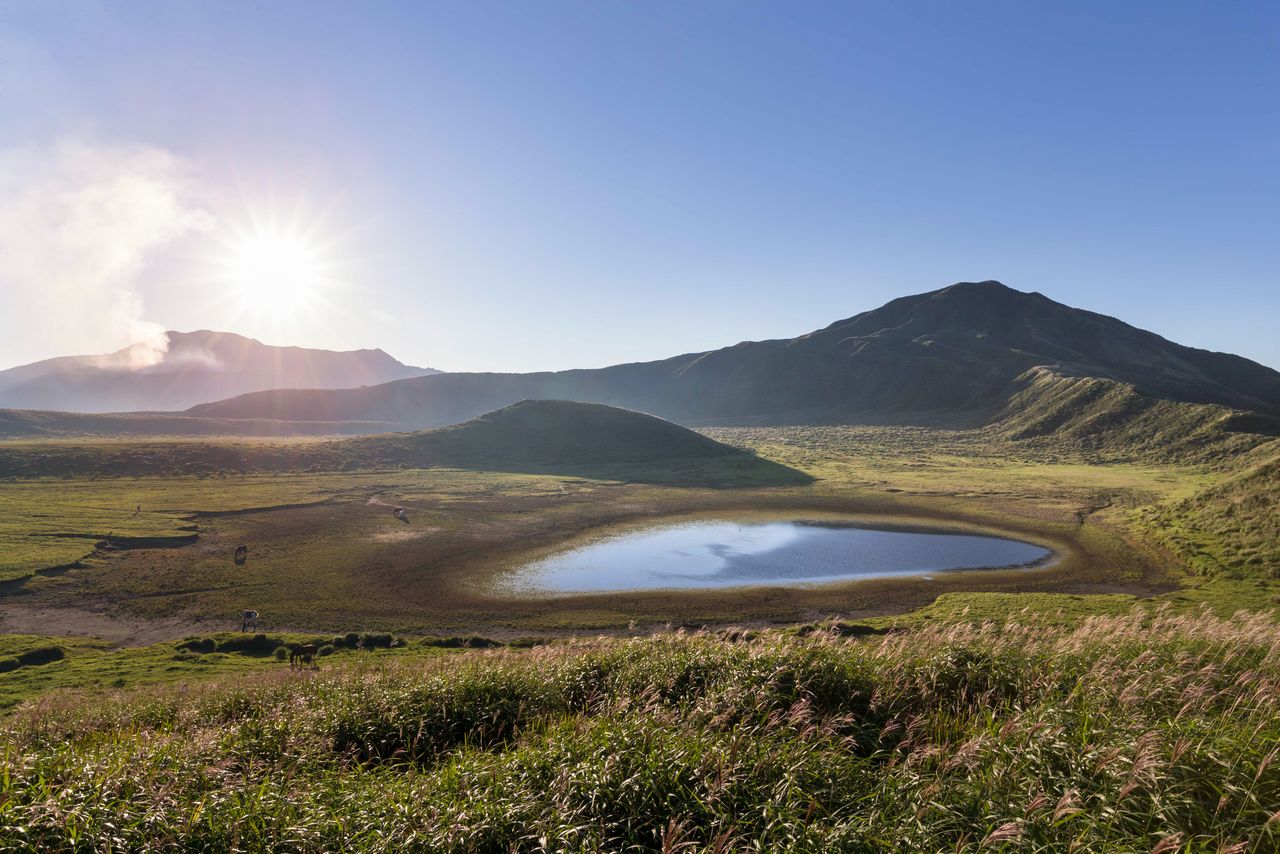 Kusasenrigahama, the remains of an extinct crater, is about one kilometer in diameter and offers a magnificent landscape of meadows and ponds. (Courtesy Kyūshū Tourism Promotion Organization) 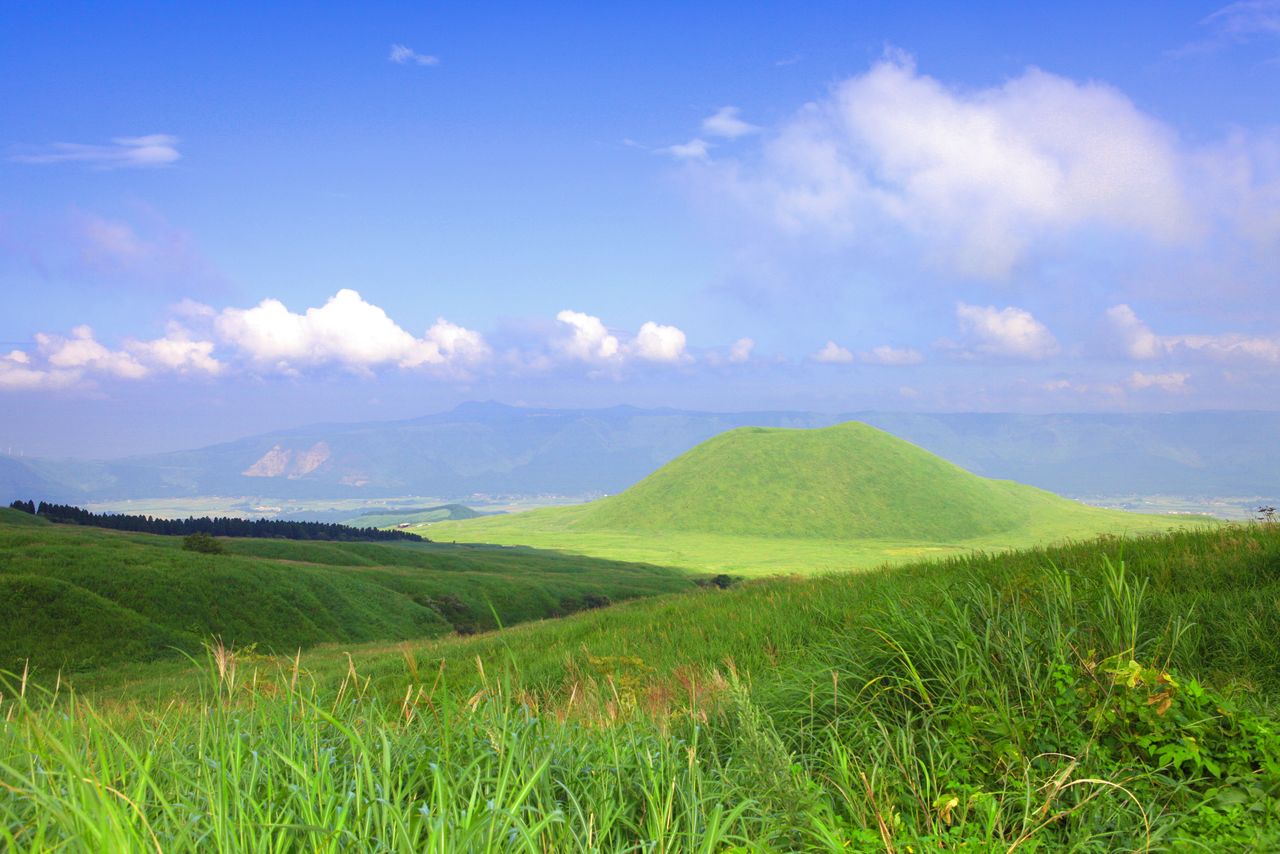 Komezuka formed around 3,000 years ago and still sports the remains of its crater at the top. (Courtesy Kyūshū Tourism Promotion Organization)

The Kujū mountains are home to rich variety of mountain flora, including the Kyūshū azalea. The lush Kujū Highland and Handa Highland. The Bōgatsuru and Tadewara wetlands are also in the area. 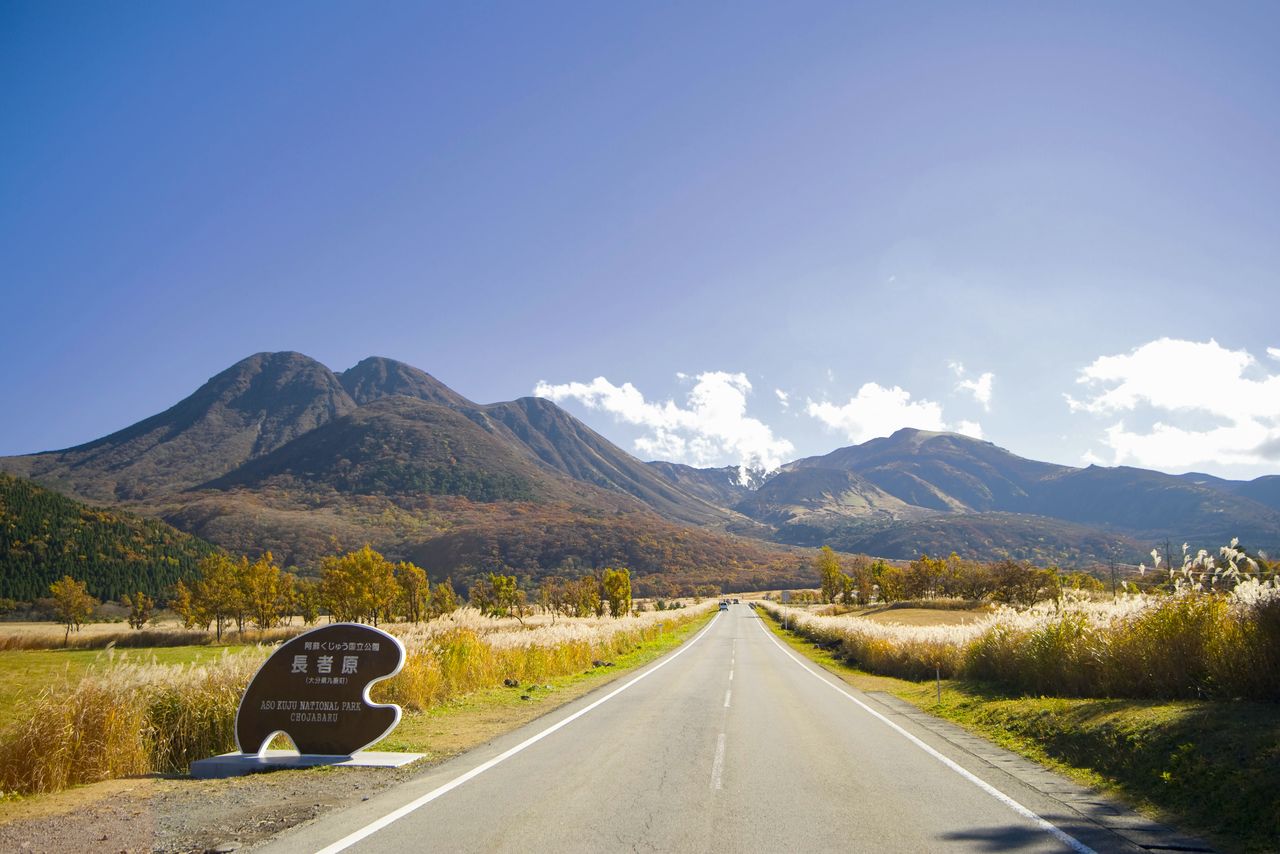 Chōjabaru at Handa Highland on the Yamanami Highway, a roadway running from Aso to Beppu via the Kujū Range. (Courtesy Kyūshū Tourism Promotion Organization) 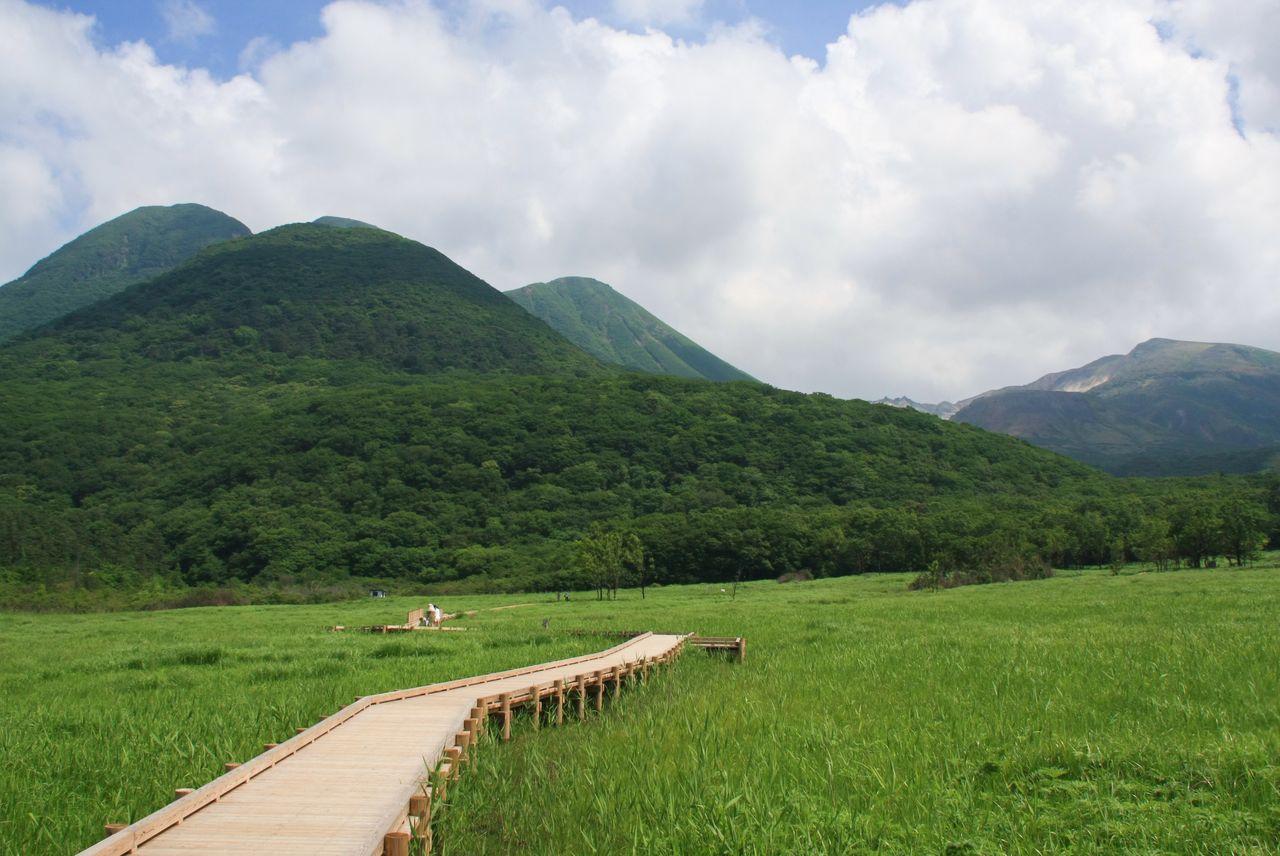 The Tadewara wetlands, located at an altitude of 1,000 meters on the Chōjabaru plateau, support a wide range of marsh plants. (Courtesy Kyūshū Tourism Promotion Organization) 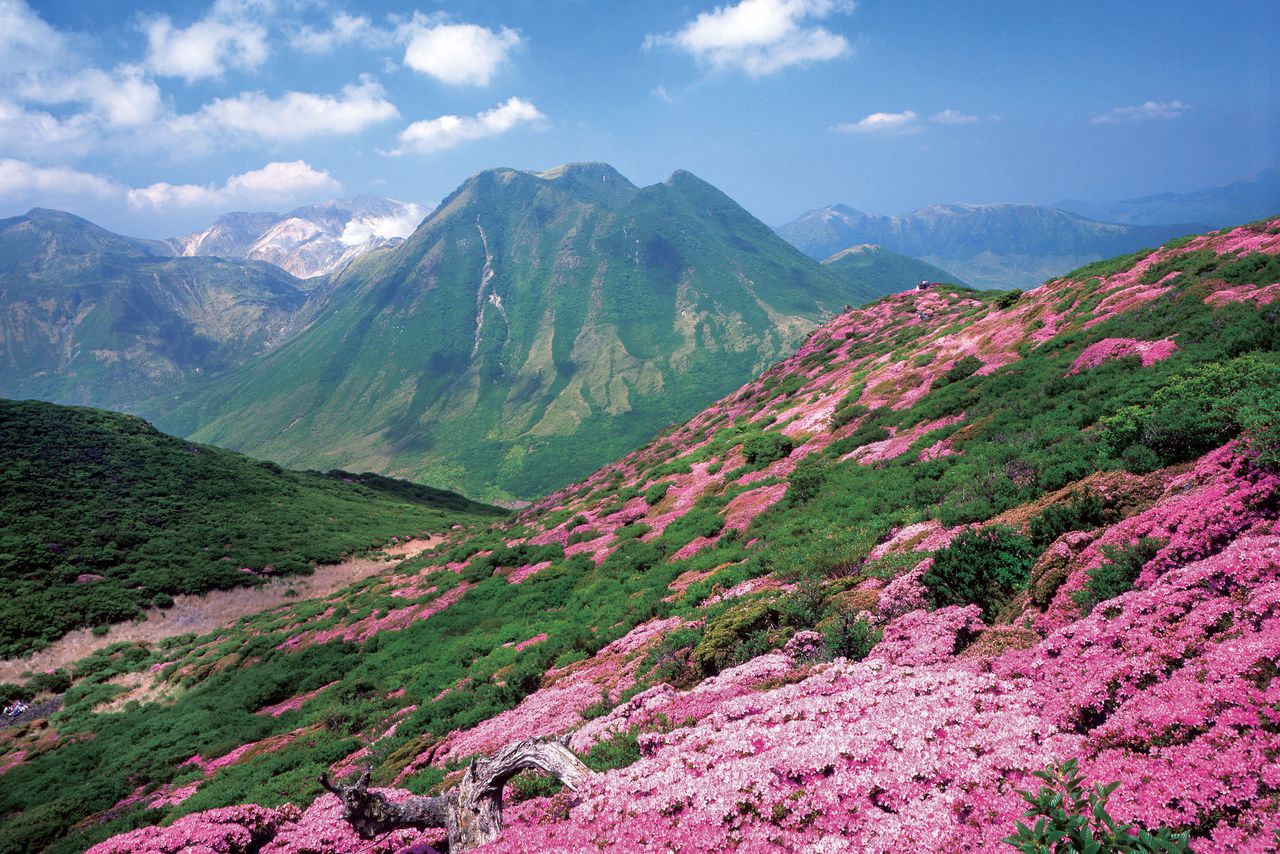 Looking over a sea of Kyūshū Azaleas toward Mount Mimata and the Kujū mountains beyond. (Courtesy Kyūshū Tourism Promotion Organization)

Mount Yufu and Mount Tsurumi at the northern end of the park are the source of the famed thermal waters of the hot spring resorts at Yufuin and Beppu. Hiking the peaks gives a spectacular view of the Yufuin basin, Beppu Bay, and Kujū mountains. 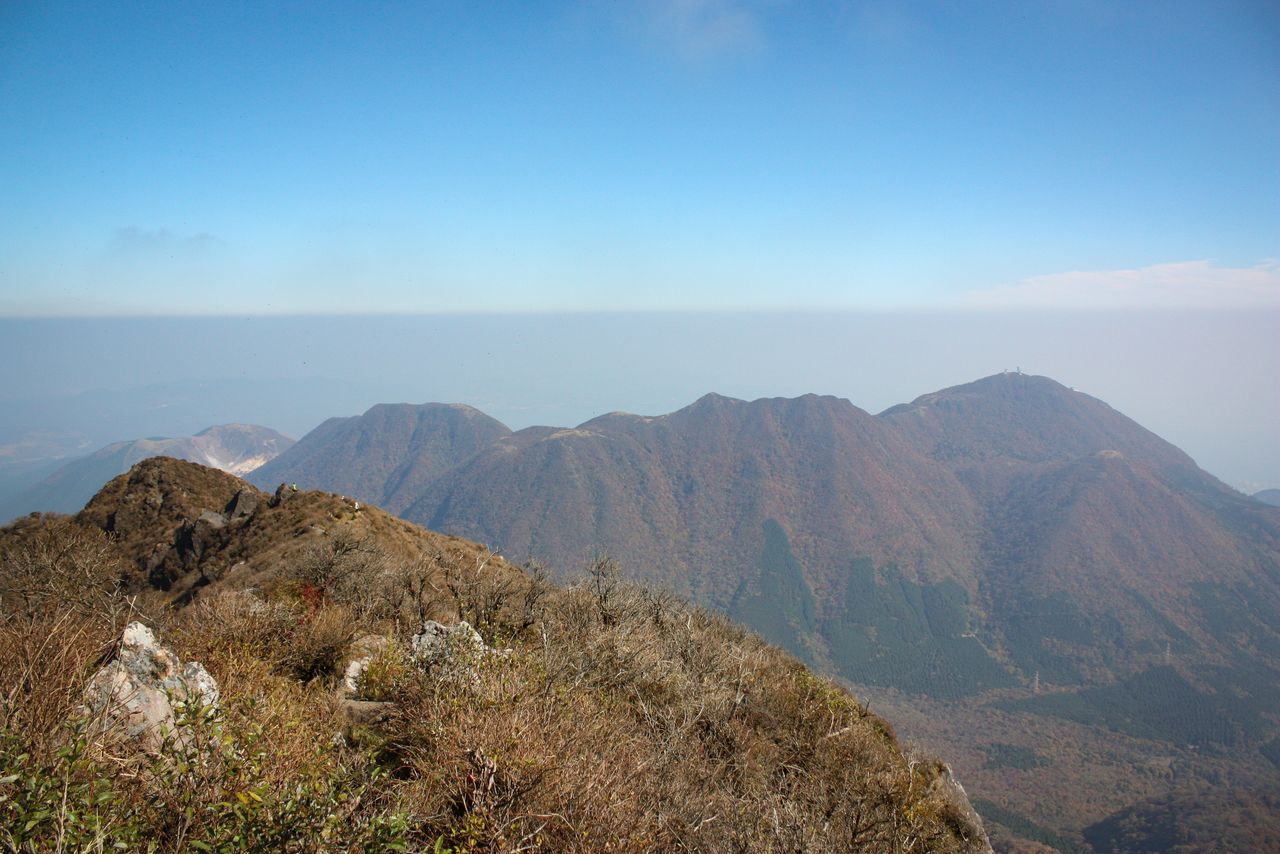 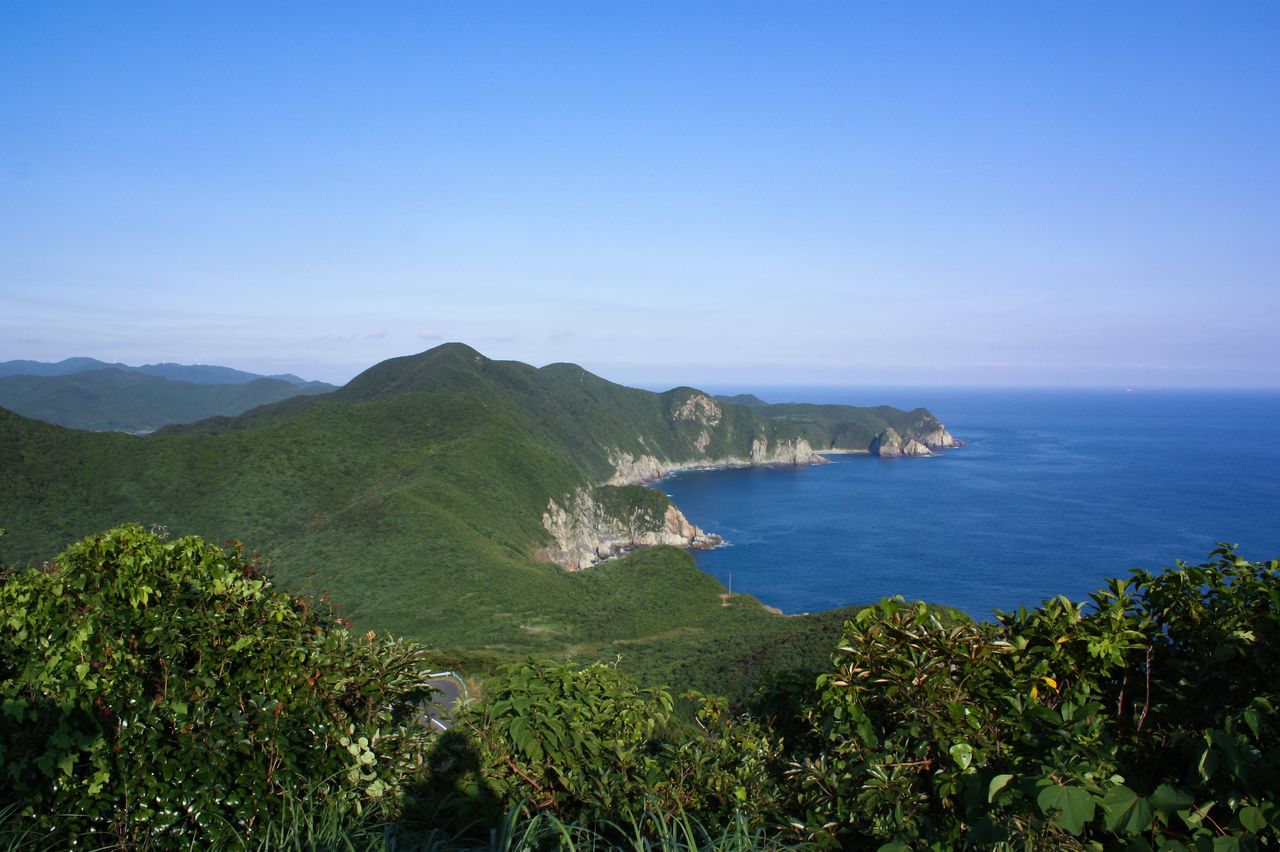 The Ōsezaki cliffs on Fukue Island stretch for 15 kilometers at a height of more than 100 meters. (Courtesy Kyūshū Tourism Promotion Organization)

Saikai National Park is located in northwestern Nagasaki Prefecture and encompasses the islands of Kujūkushima, the Tawaragaura Peninsula in Sasebo Bay, Hirado Island, and the Gotō Islands. The park is characterized by deeply indented coastlines and a multitude of islands.

The area of Kujūkushima, with its more than 208 islands, is popular with vacationers looking to enjoy the sea. Visitors also come to watch the many azaleas bloom and to take in the panoramic view over the islands. The numerous volcanic rocks on the island of Hirado create a unique landscape that includes Mount Sashi and Mount Shijiki, the lava plateau at Kawachi pass, and Mount Yasuman. 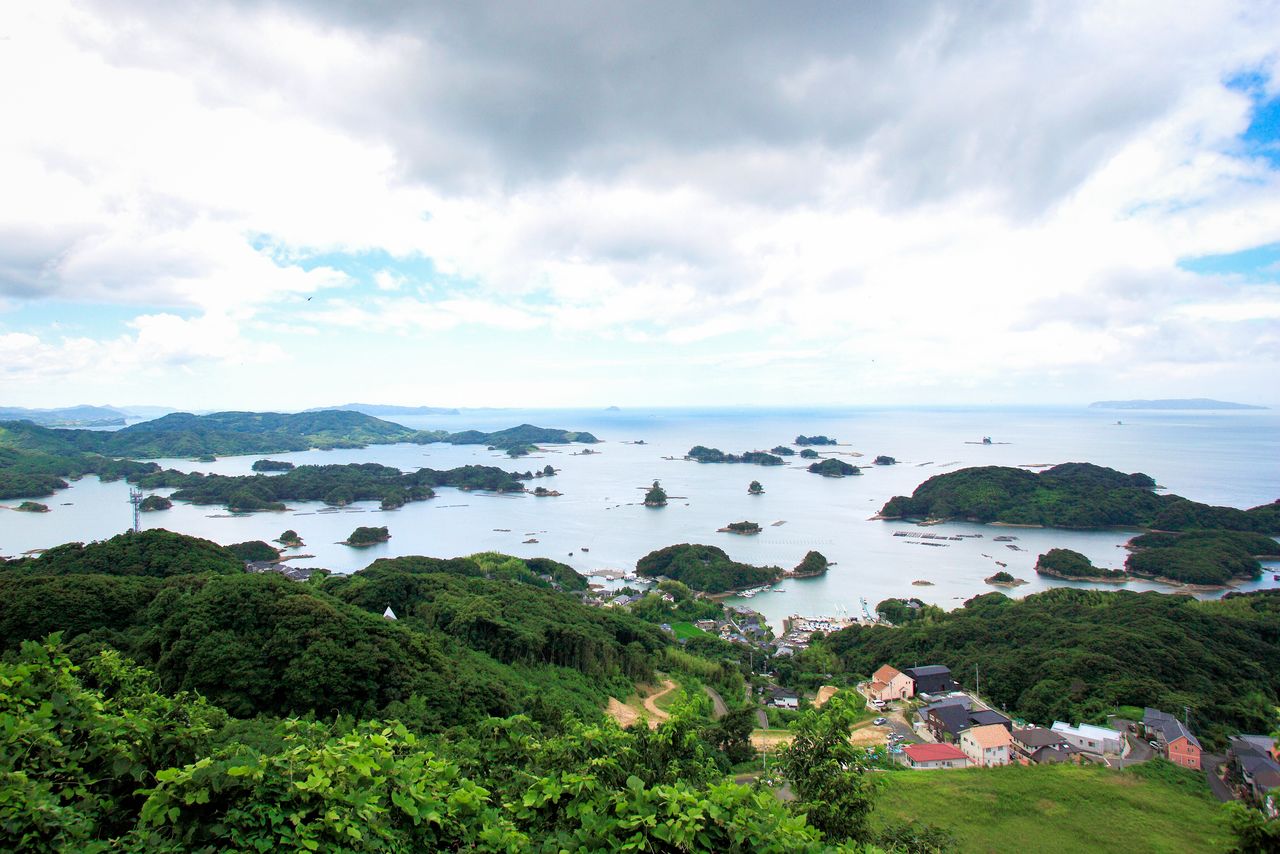 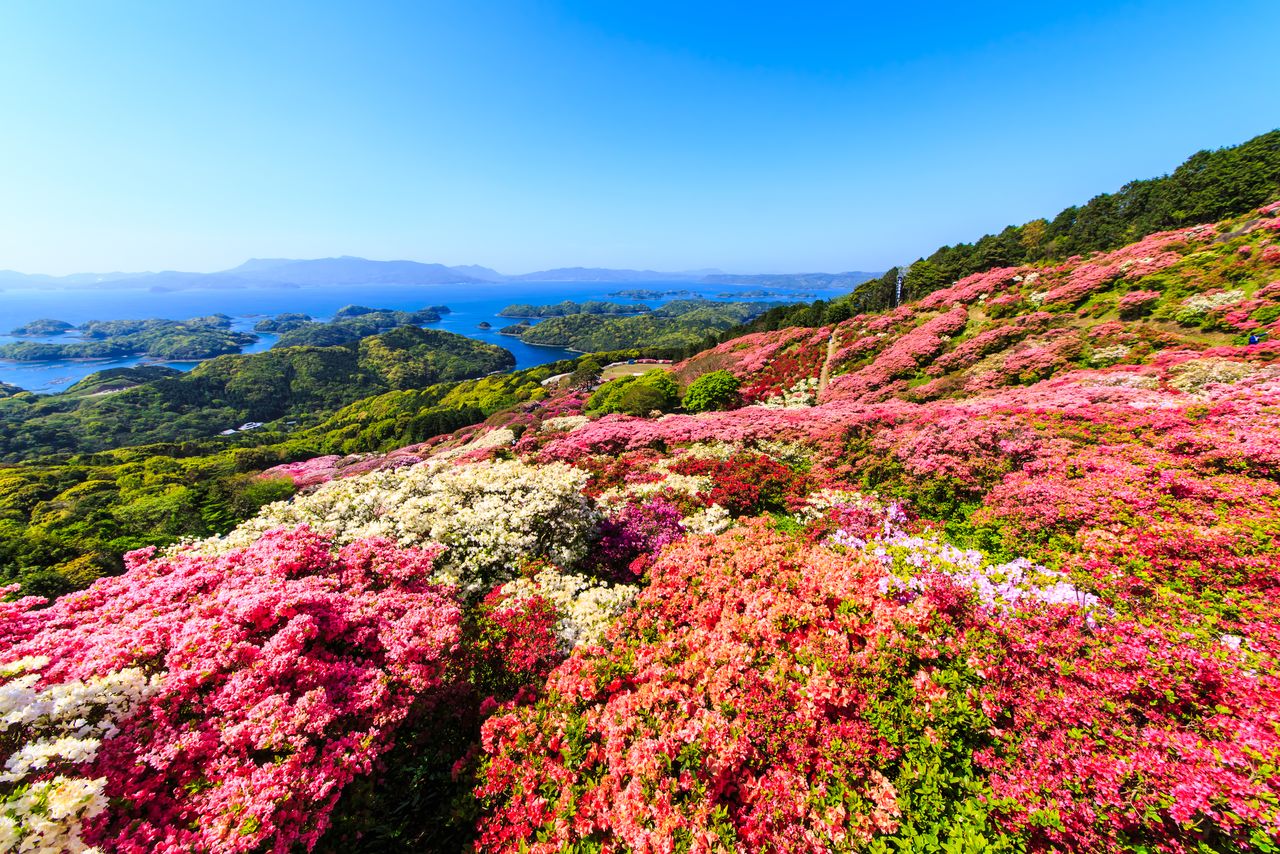 Looking over the azaleas in Nagushiyama Park toward Kujūkushima. (© Pixta) 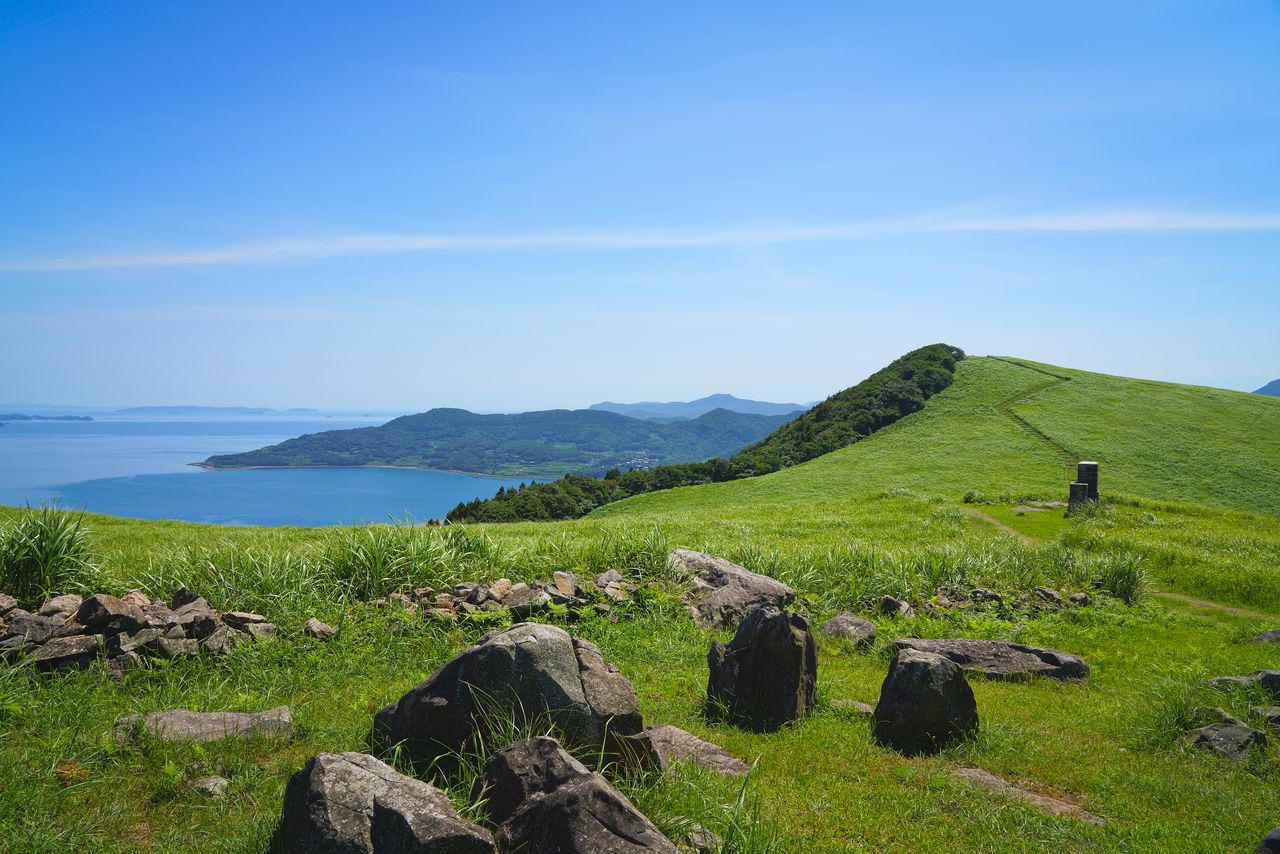 The basalt lava plateau, called Kawachi pass, at Hirado is a popular scenic spot that offers great views of the Genkai Sea and Kujūkushima. (© Pixta)

The Gotō Islands span an area of around 80 kilometers in the East China Sea and are comprised of seven major islands along with some 140 smaller ones. The sea had sculpted the coastline into intricate shapes, while inland areas offer verdant and gentle landscapes. Many of the historic churches once attended by the islands’ hidden Christians still stand. UNESCO listing of these sites and the many beautiful beaches on the islands have made the area a popular tourist destination. 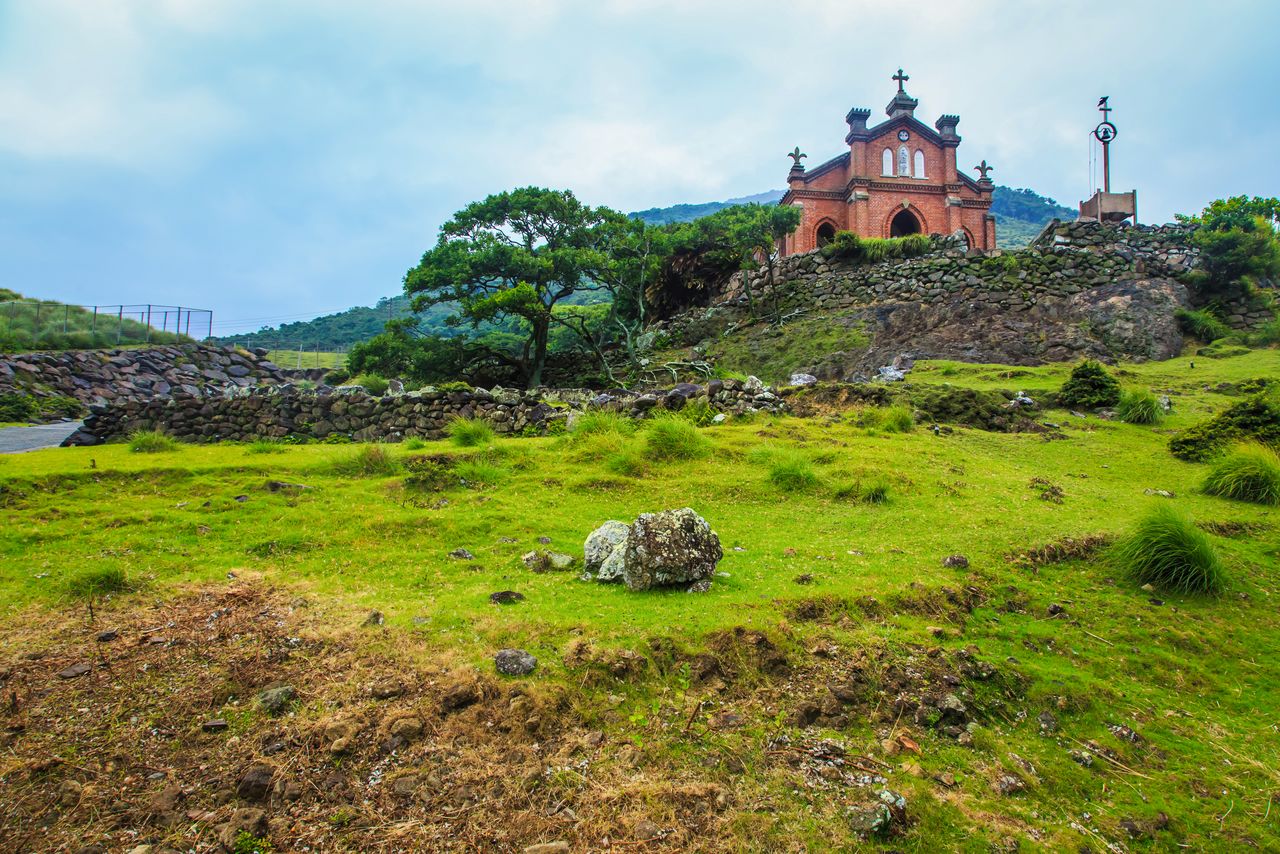 The Nokubi Church, built in 1908, is on uninhabited Nozaki Island. (© Pixta) 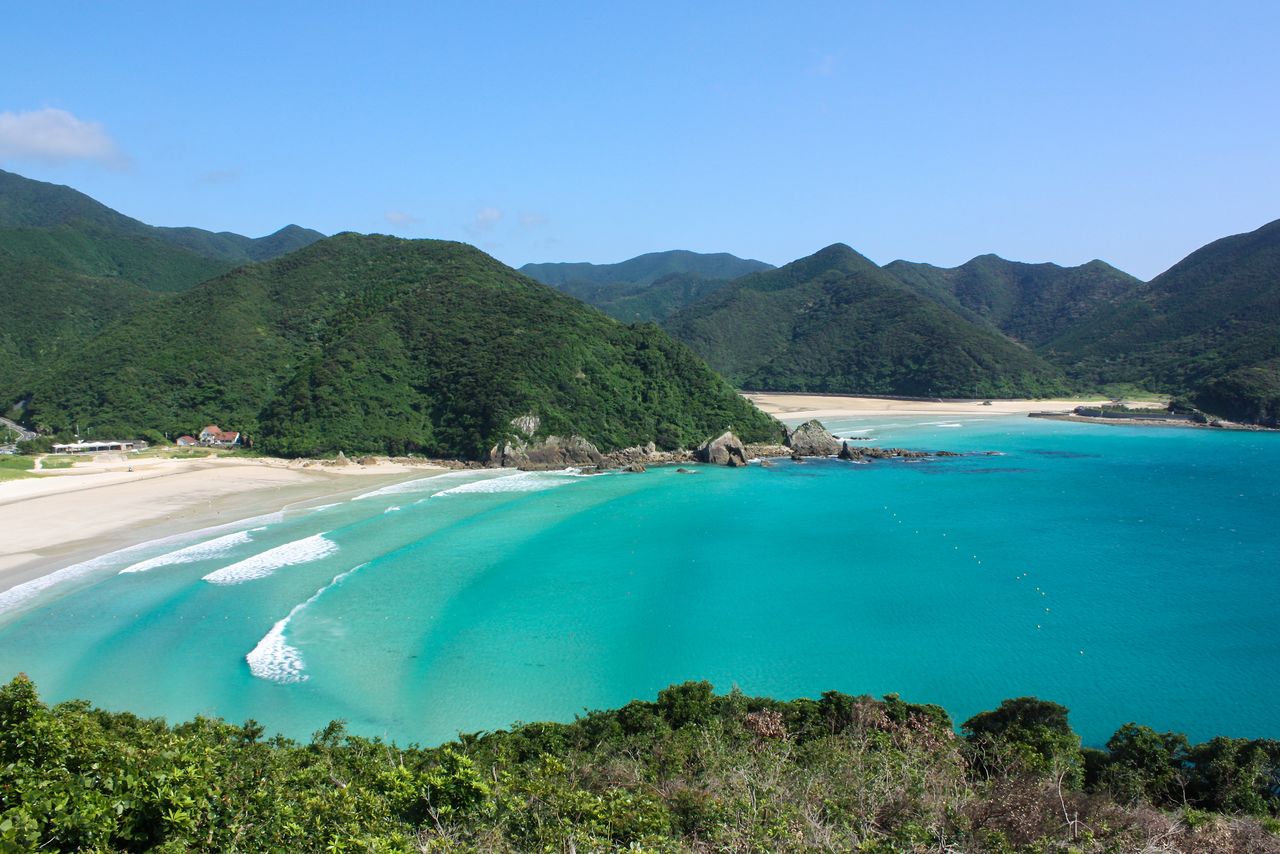 The white sand beach at Takahama on Fukue Island is a popular spot with swimmers. (Courtesy Kyūshū Tourism Promotion Organization) 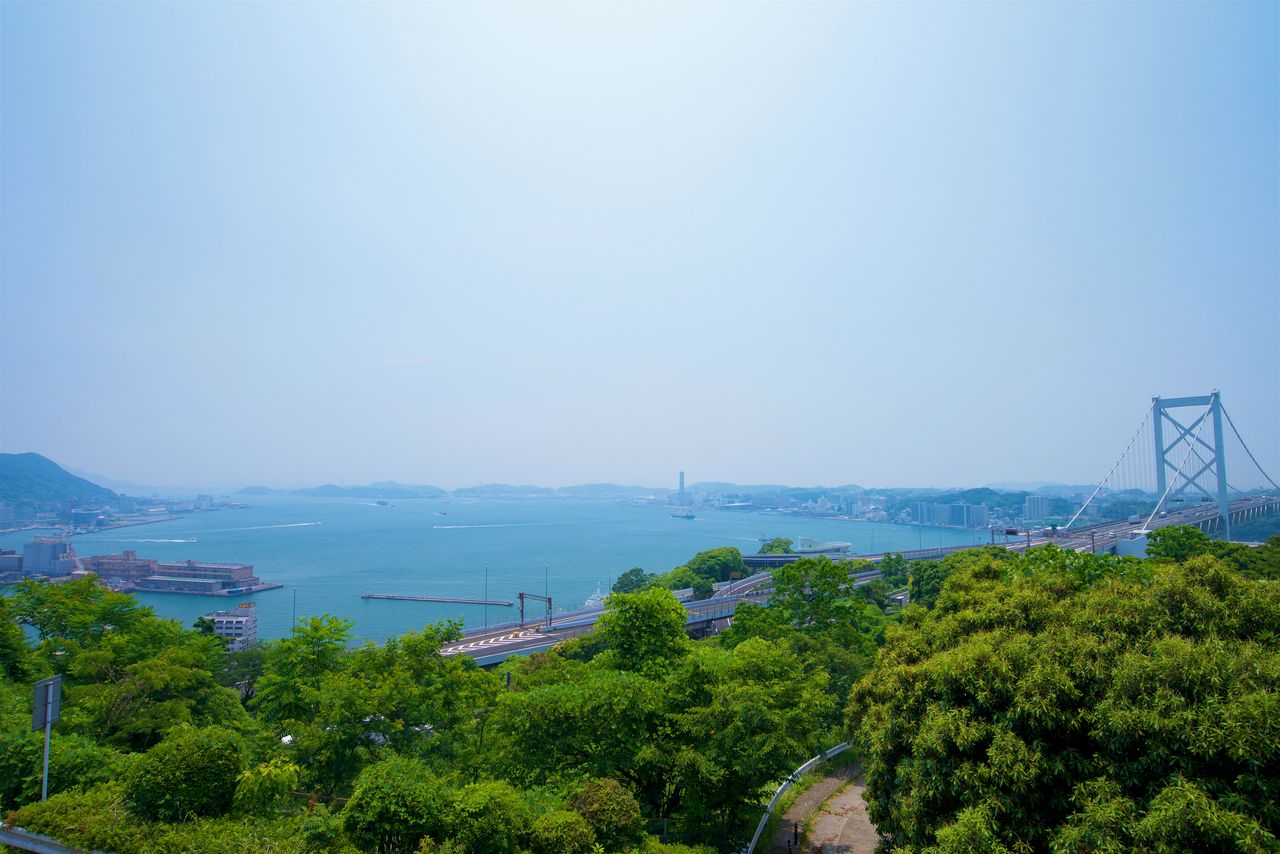 The Kanmon Straits seen from an observation area at Mekari Park. (© Pixta)

The biggest of Japan’s national reserves, the Setonaikai National Park, stretches over one administrative area and 10 prefectures, from Osaka in the east to Ōita and Fukuoka in the west, and covers more than 900,000 hectares, including the inland sea itself.

Of note in Ōita Prefecture are the areas around the peak of Mount Futago, on the Kunisaki Peninsula, and the island of Himeshima in the sea to the north. The only designated section in Fukuoka Prefecture is Mekari Park in Moji, Kitakyūshū, that overlooks the Kanmon Strait. 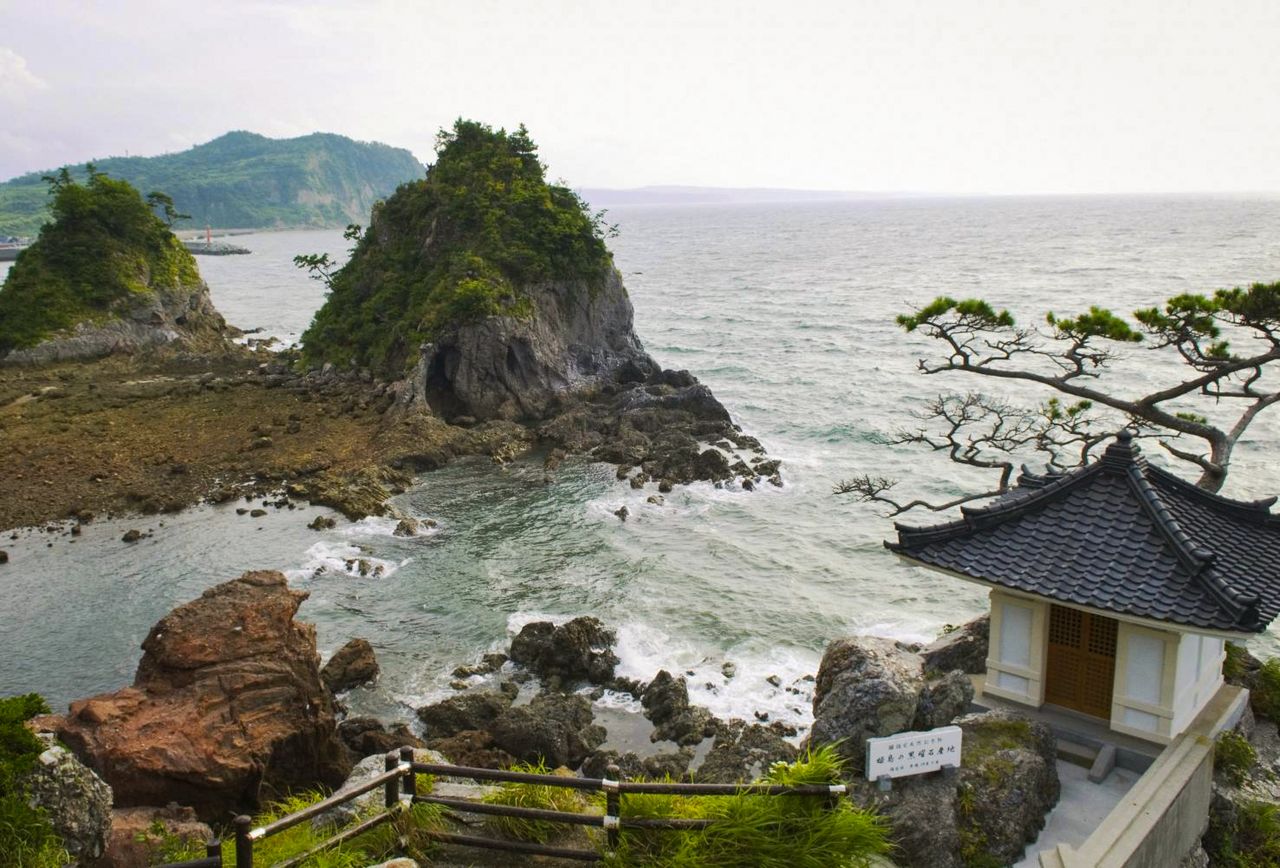 (Originally published in Japanese. Banner photo: A view over Saikai National Park and Kujūkushima, taken from the Tenkaihō Observatory on the Tawaragaura Peninsula. © Pixta.)