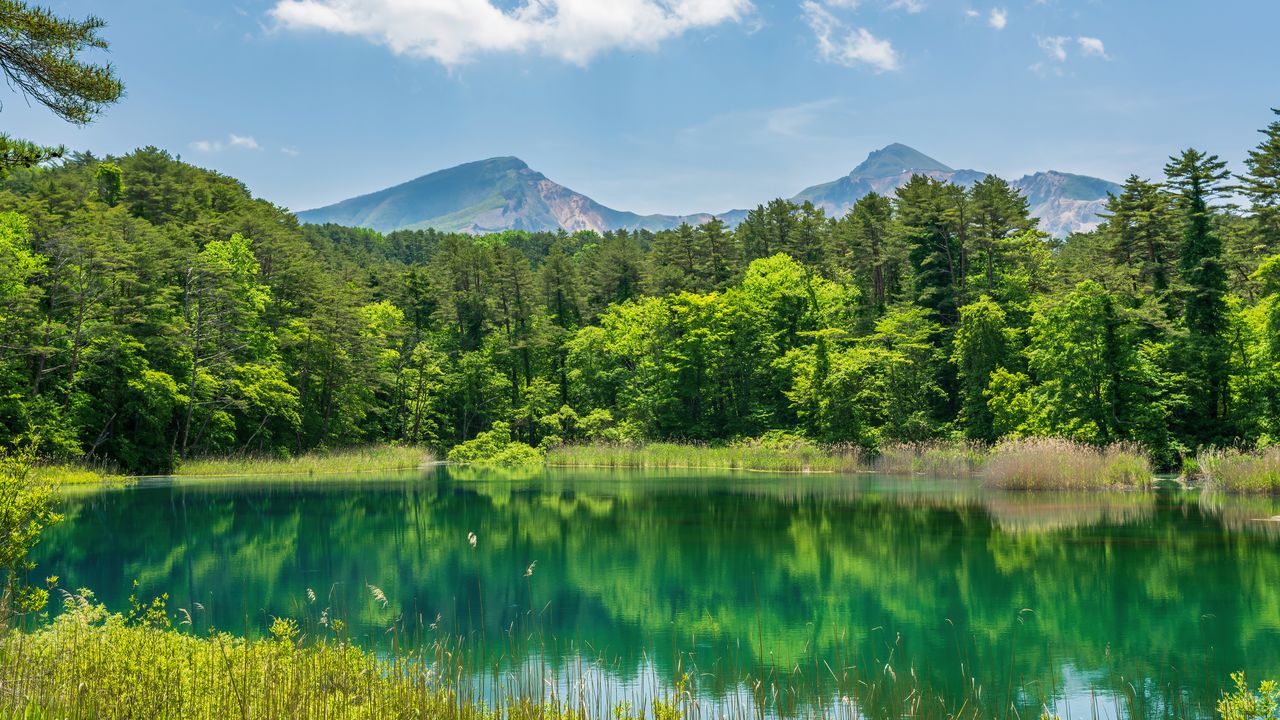 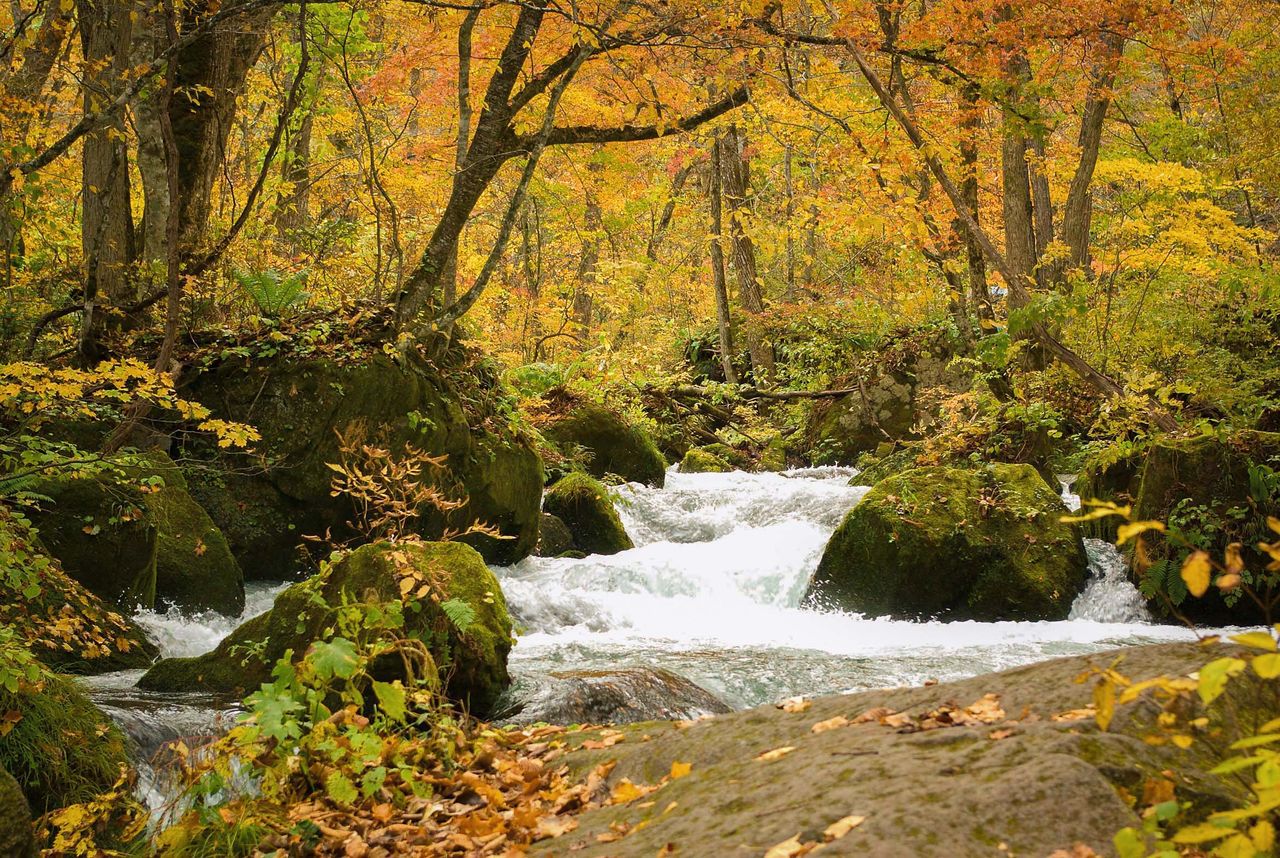 Towada-Hachimantai National Park spans the Towada and Hakkōda regions in Aomori Prefecture and the Hachimantai area, which straddles the border of Iwate and Akita Prefectures. Its verdant mountains and clear lakes and mountain streams offer splendid panoramas from spring to autumn, with snow and rime-covered vegetation an added attraction in winter.

The Hakkōda Mountains are a volcanic range running through the middle of Aomori. The tallest peak to the north is 1,585-meter Ō-dake and to the south is 1,517-meter Kushigamine. The trails in the northern part of the range are well maintained and a ropeway runs to the top of 1,324-meter Tamoyachi-dake, providing convenient access for hiking and skiing. The southern span of the range, on the other hand, is less well-developed and geared more to experienced climbers. 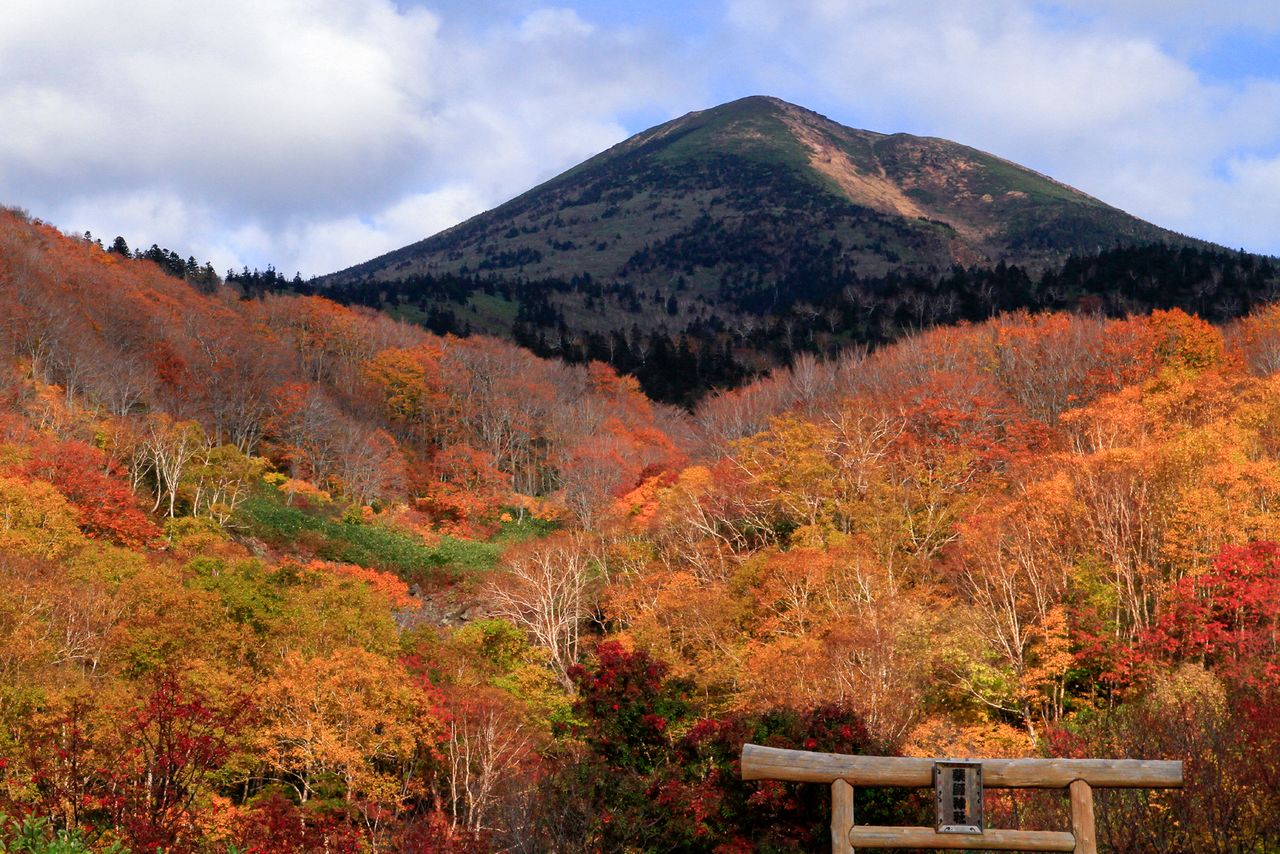 Hakkōda Ō-dake, with the gate of Yakushi Shrine in the foreground. (Courtesy Aomori Prefectural Tourism Federation) 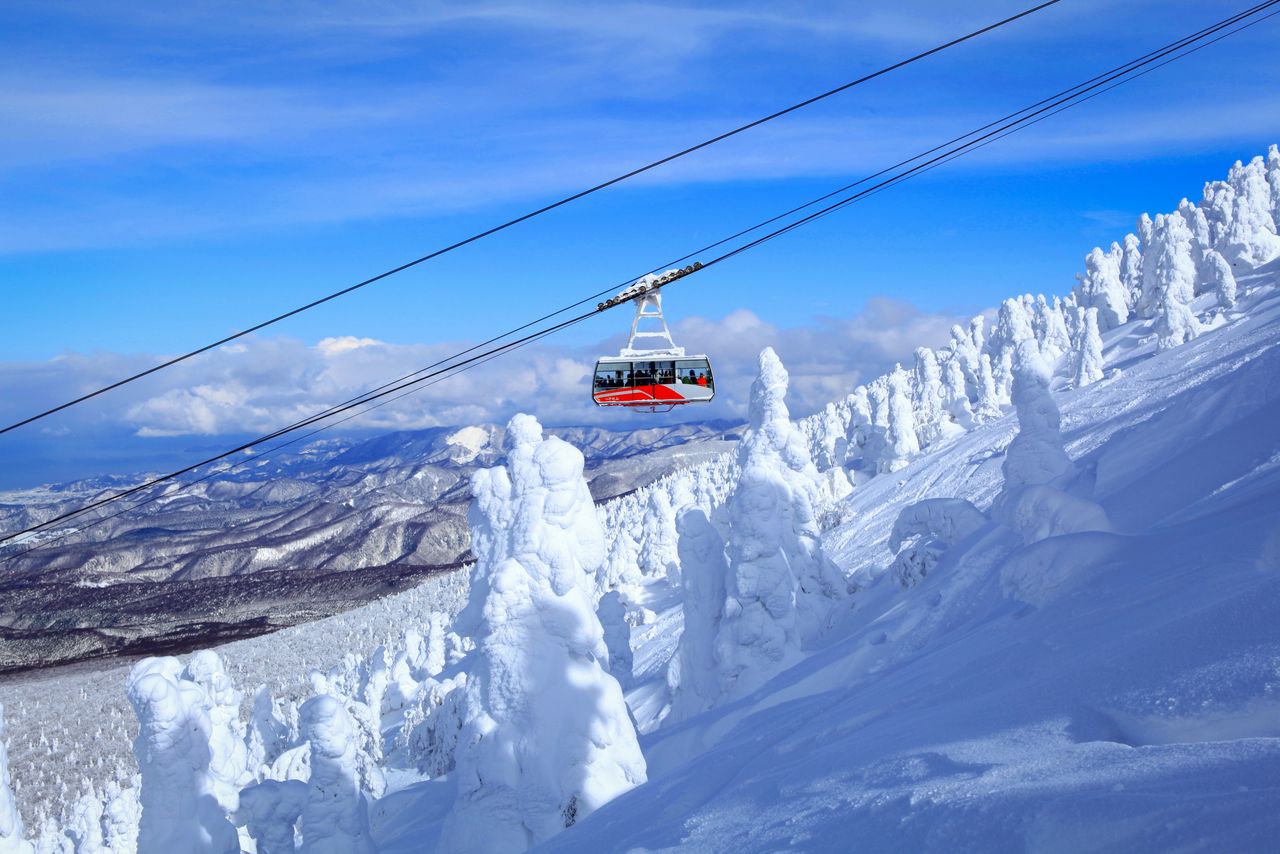 Lake Towada, on the border between Aomori and Akita Prefectures is a massive caldera lake some 46 kilometers in circumference. It is famed for its deep, clear waters, which plunge to depths of 327 meters, turning the surface a mysterious indigo shade. The lake, together with the 14-kilometer-long Oirase Gorge flowing out of it, has been designated a place of special scenic beauty and a natural monument. 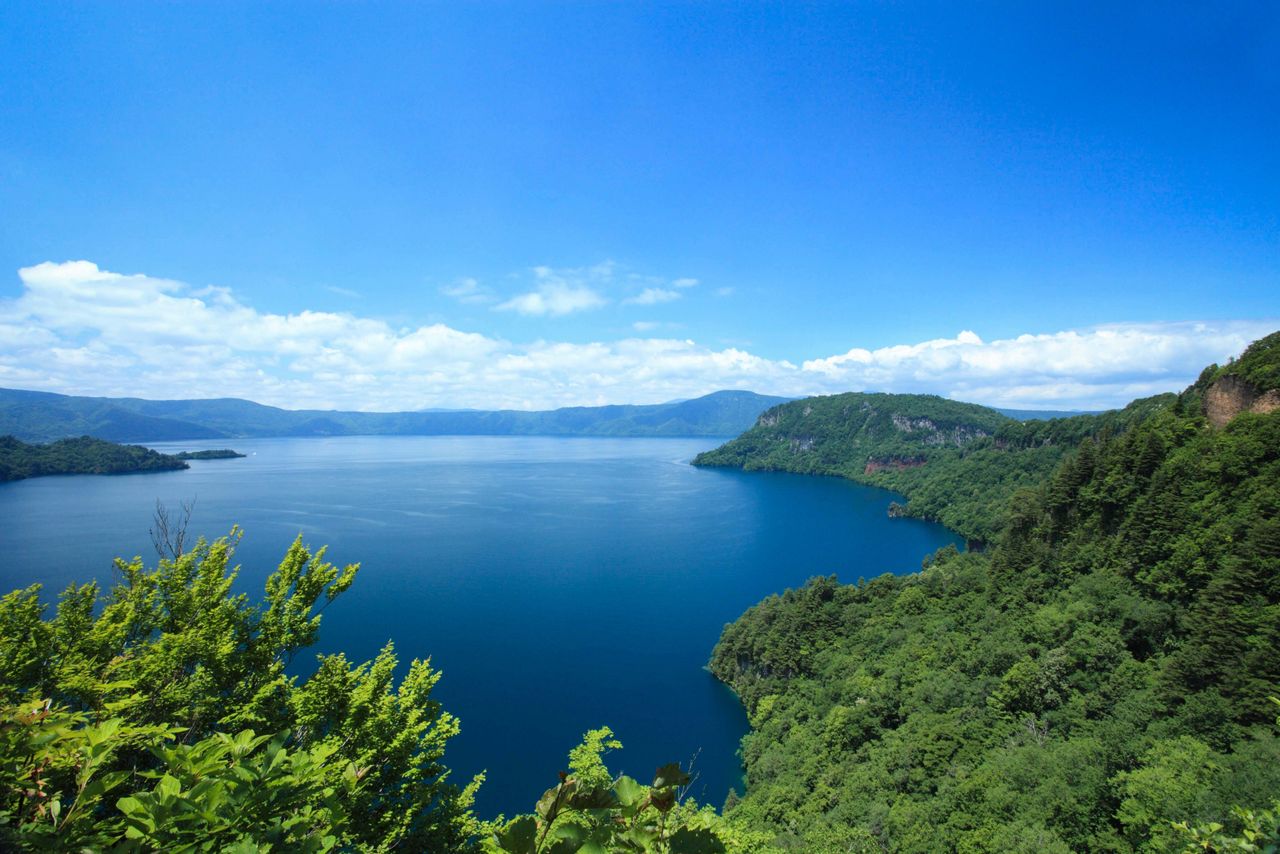 Visitors to Lake Towada can enjoy the scenic beauty along walking trails as well as aboard sightseeing vessels that ply the waters. (Courtesy Aomori Prefectural Tourism Federation) 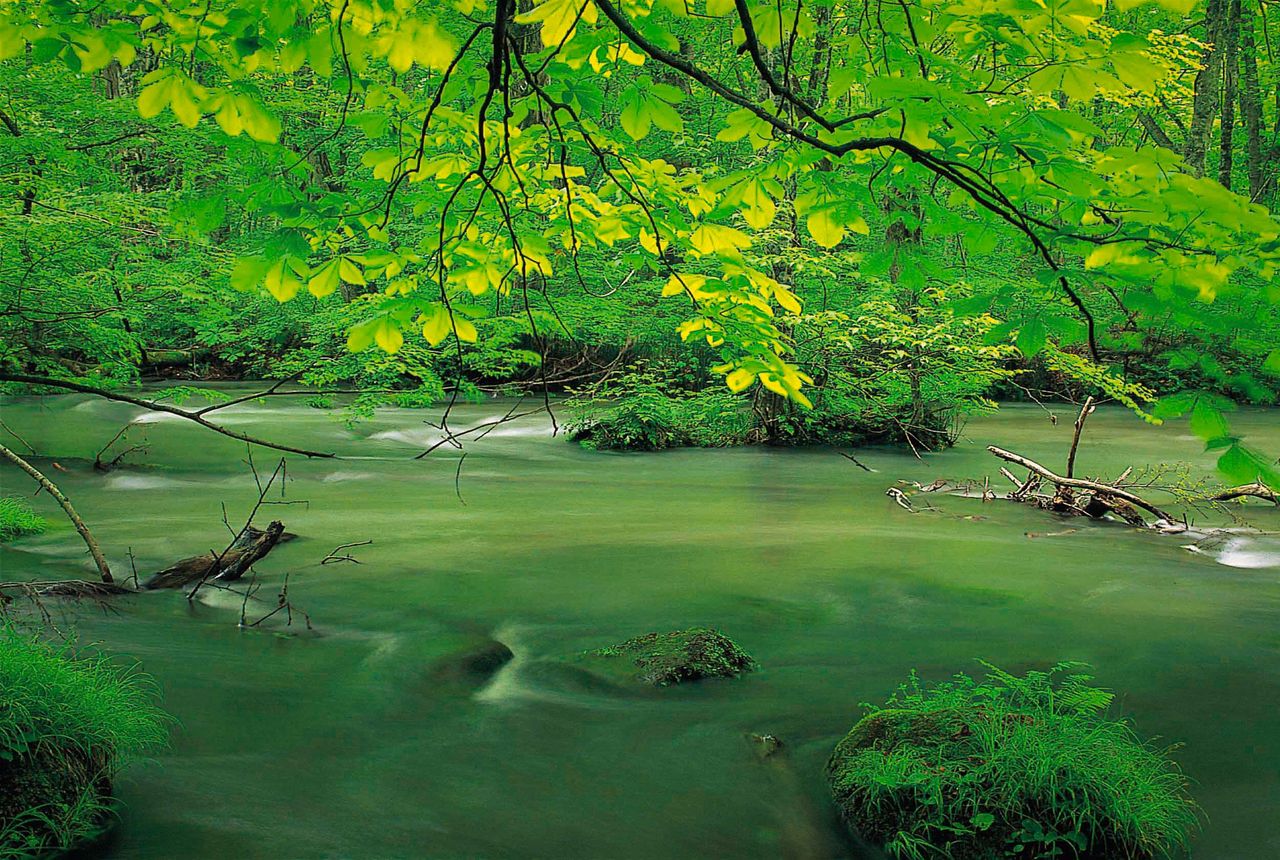 The Hachimantai Highlands, 1,614 meters above sea level at the highest point, are dotted with numerous lakes and marshes, including Lake Hachiman. The area is a popular trekking spot where visitors can observe varied ecosystems. Winter snows are deep, and in early spring, the Hachimantai Aspite Line and other roads re-open, threading through walls of snow several meters high. The Hachimantai area includes Akita-Komagatake, the southernmost point and a treasure trove of highland vegetation, and 2,038-meter Mount Iwate, the highest peak in Iwate Prefecture, to the east. 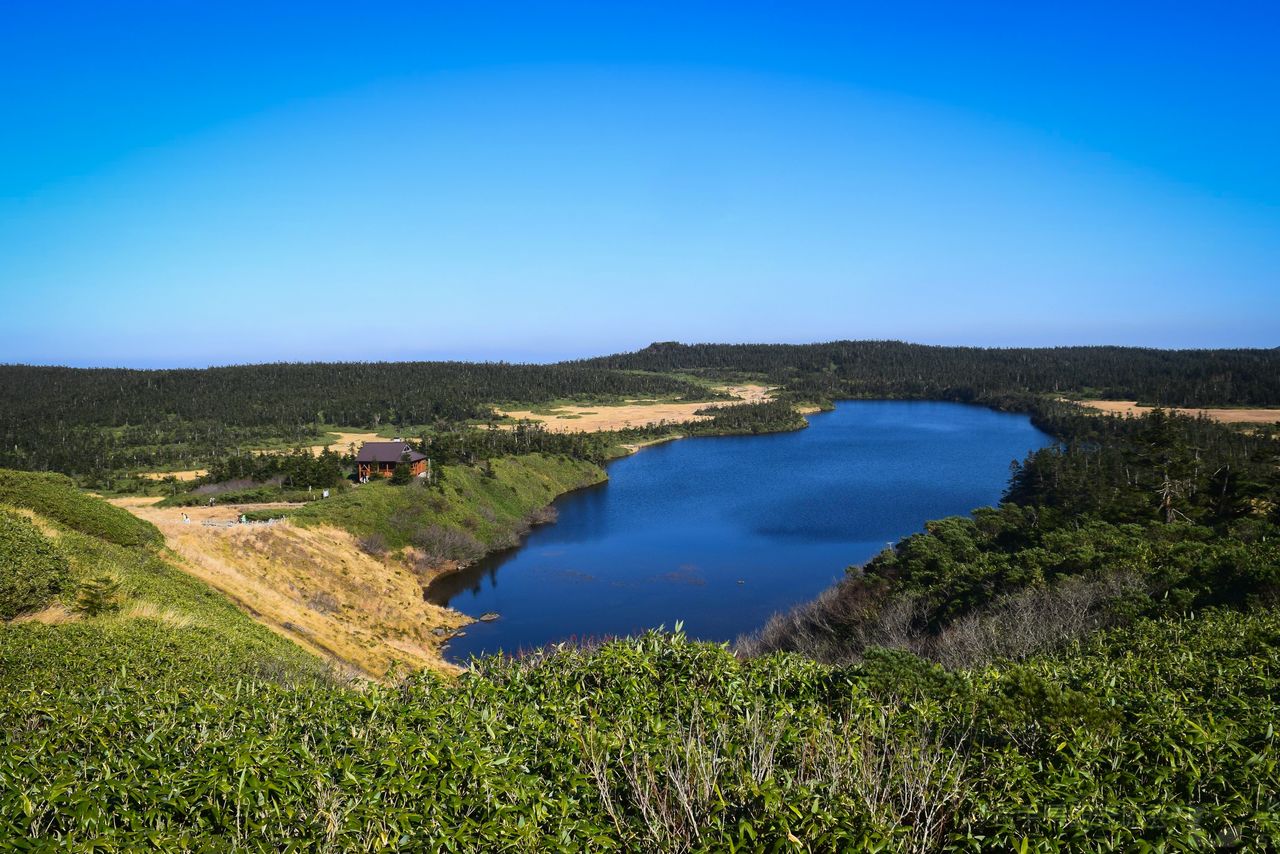 A scenic view of the Hachimantai volcanic plateau. Lake Hachiman, pictured here, features amenities such as a walking trail along the shore and scenic observation points. (Courtesy Iwate Tourism Association) 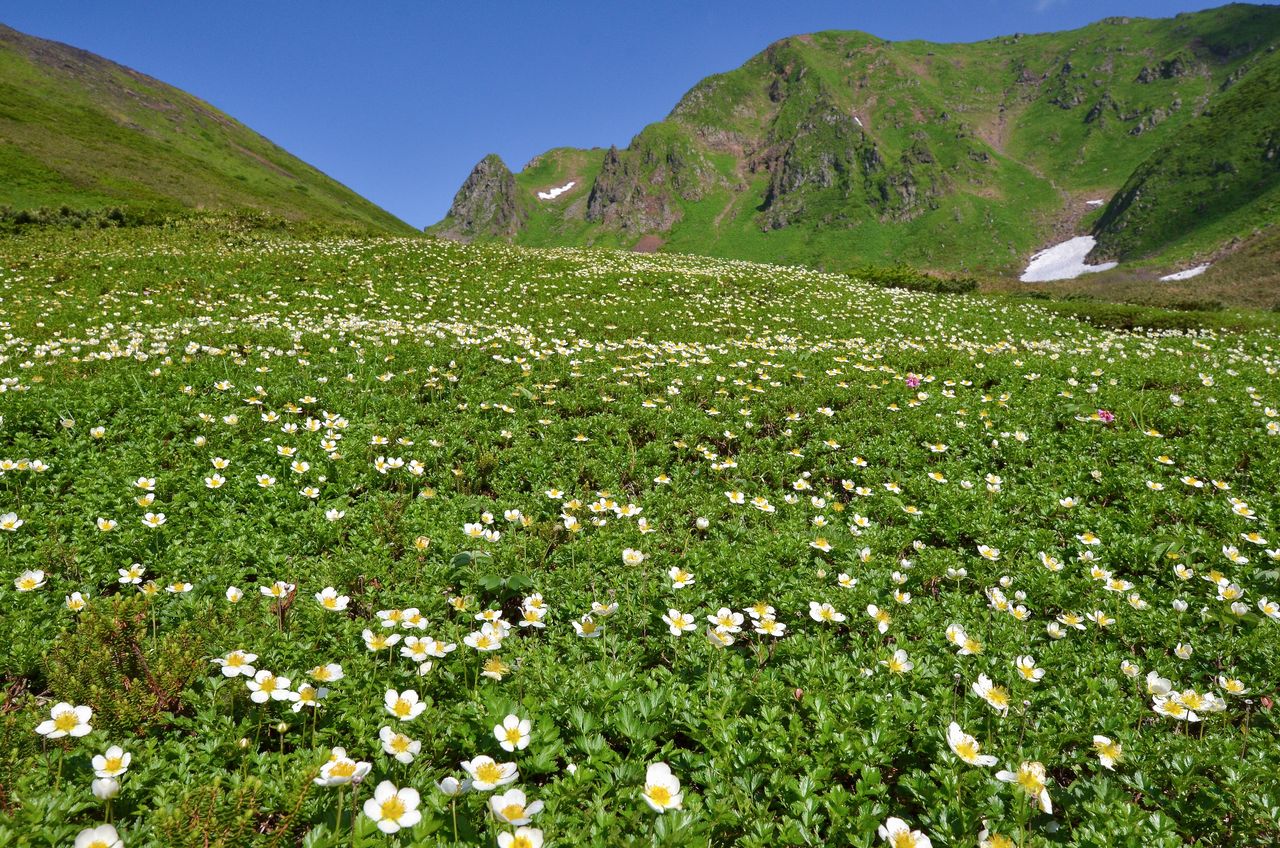 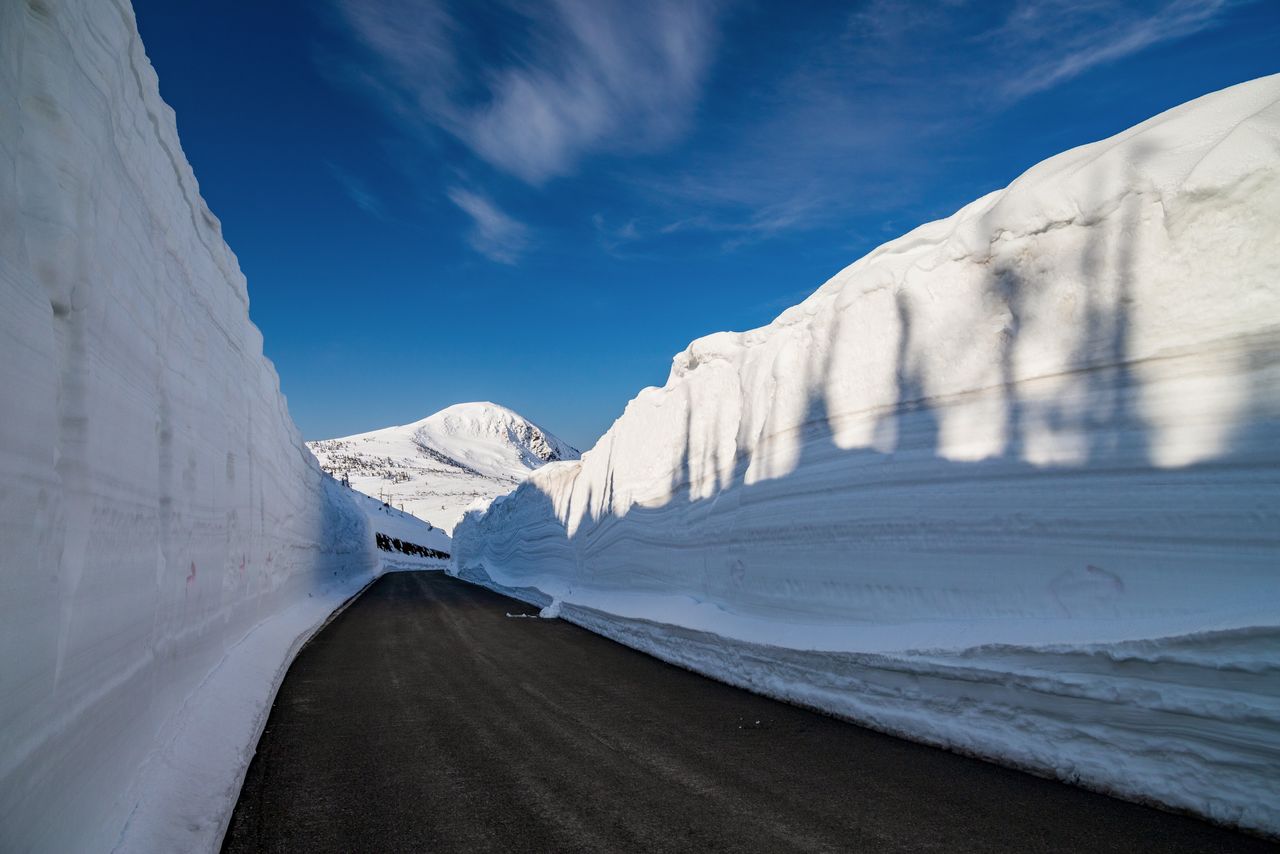 Hot springs are plentiful in both regions. Nestled in the western foothills of Hakkōda Ō-dake is Sukayu Onsen and its senninburo, “bath of a thousand bathers.” In the city of Senboku in neighboring Akita Prefecture, Nyūtō Onsenkyō consists of several hot spring inns strung along a gorge. In both spots, visitors can enjoy rejuvenating hot spring waters after a day of hiking or mountain climbing. 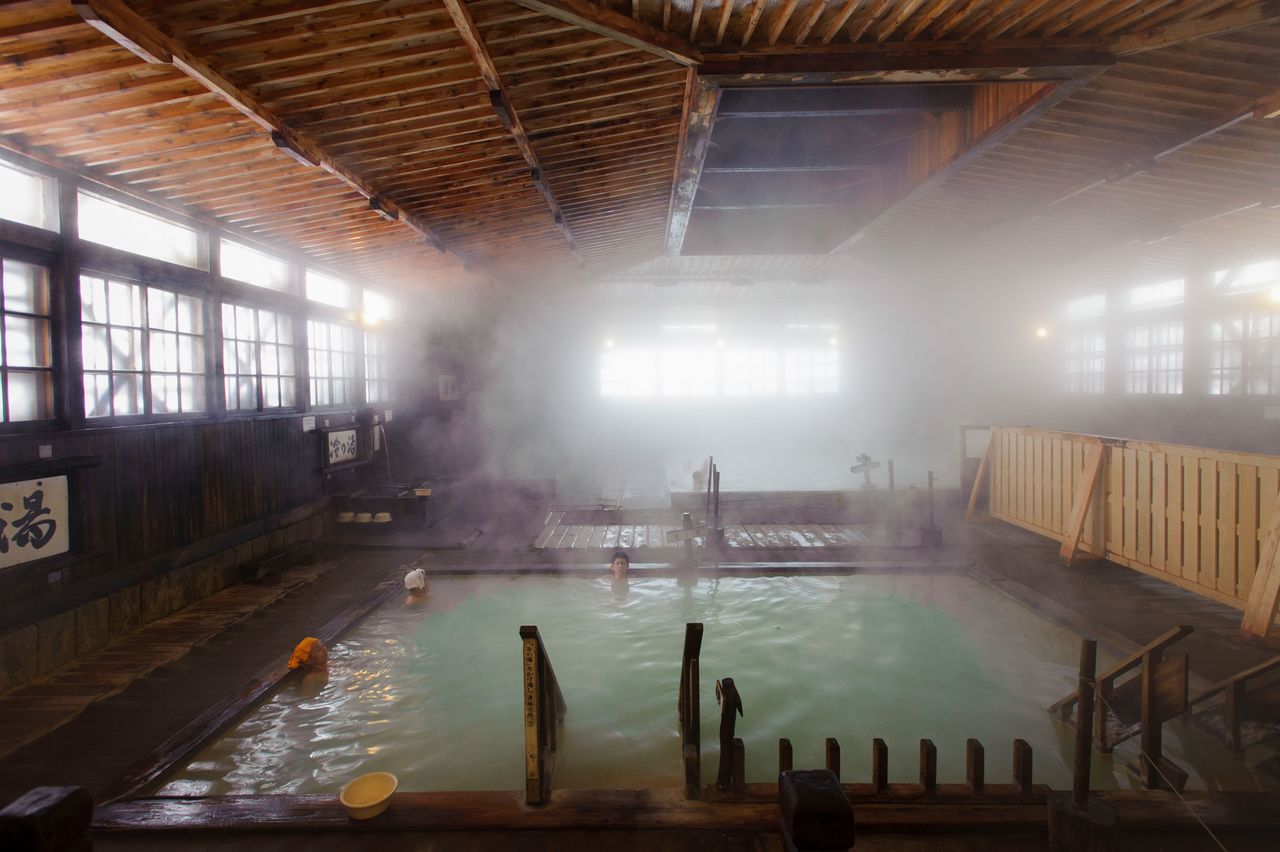 The mixed-bathing senninburo at Sukayu Onsen. Many users are long-term guests who come for the waters’ therapeutic effects. (Courtesy Aomori Prefectural Tourism Federation) 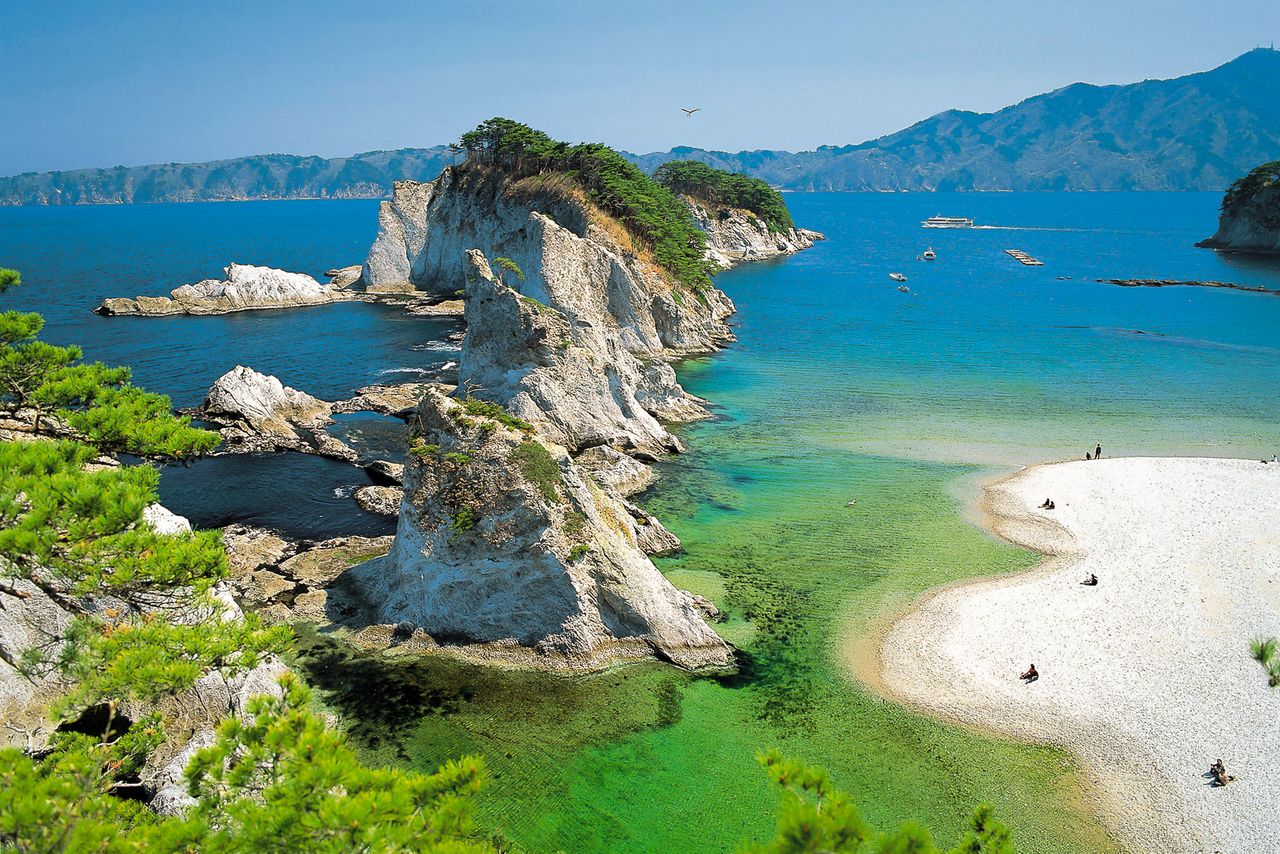 In 2013, Aomori Prefecture’s Tanesashi Kaigan and Hashikami-dake Prefectural Nature Park was incorporated into the Rikuchū Kaigan National Park, which was first established in 1955, as a way to promote reconstruction efforts after the 2011 Great East Japan Earthquake. The park was further expanded with the addition in 2015 of Miyagi Prefecture’s Minami Sanriku Kinkasan Quasi-National Park, forming the newly-named Sanriku Fukkō National Park, which stretches 250 kilometers along the Pacific coastline.

The park’s northernmost point is Kabushima, a peninsula in Hachinohe, Aomori Prefecture. The area, designated a natural monument, is a breeding ground for black-tailed gulls. At its southern end are Tanesashi Kaigan, with its eroded sea cliffs and strange rock formations, and 740-meter Hashikami-dake, which offers stunning views of the Pacific Ocean. 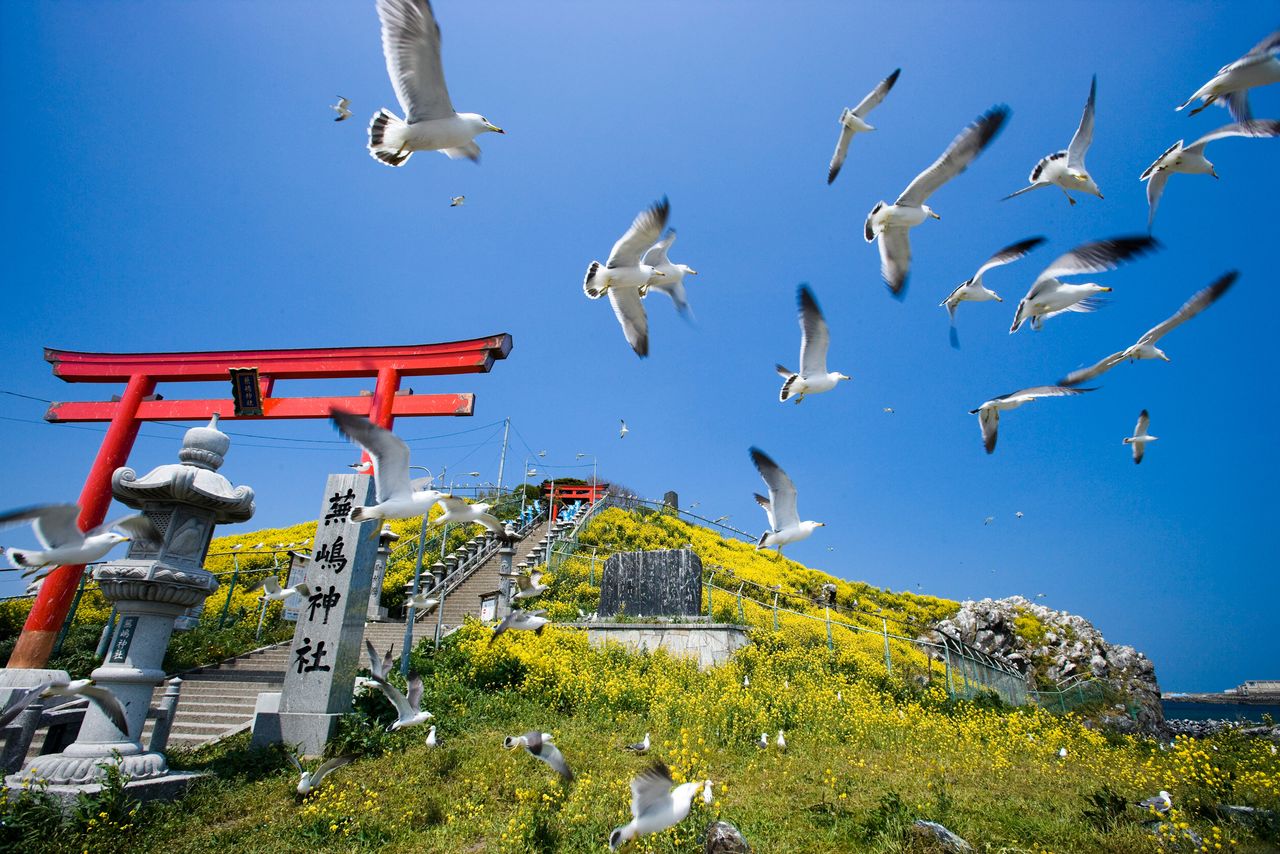 The former Rikuchū Kaigan National Park consists of a northern area stretching from Kuji in Iwate Prefecture to the rich marine life of Miyako Bay. Kuji is the farthest north that ama, female free divers, work gathering shellfish from the ocean floor. The coast is lined with cliffs 50 to 200 meters high, earning the spot the name “the Alps of the ocean.” The southern portion of the park presents a varied panorama featuring a long coastline of deep troughs separated by prominent ridges. Inland along the highly indented coast are the major fishing ports of Kamaishi, Ōfunato, and Kesennuma. 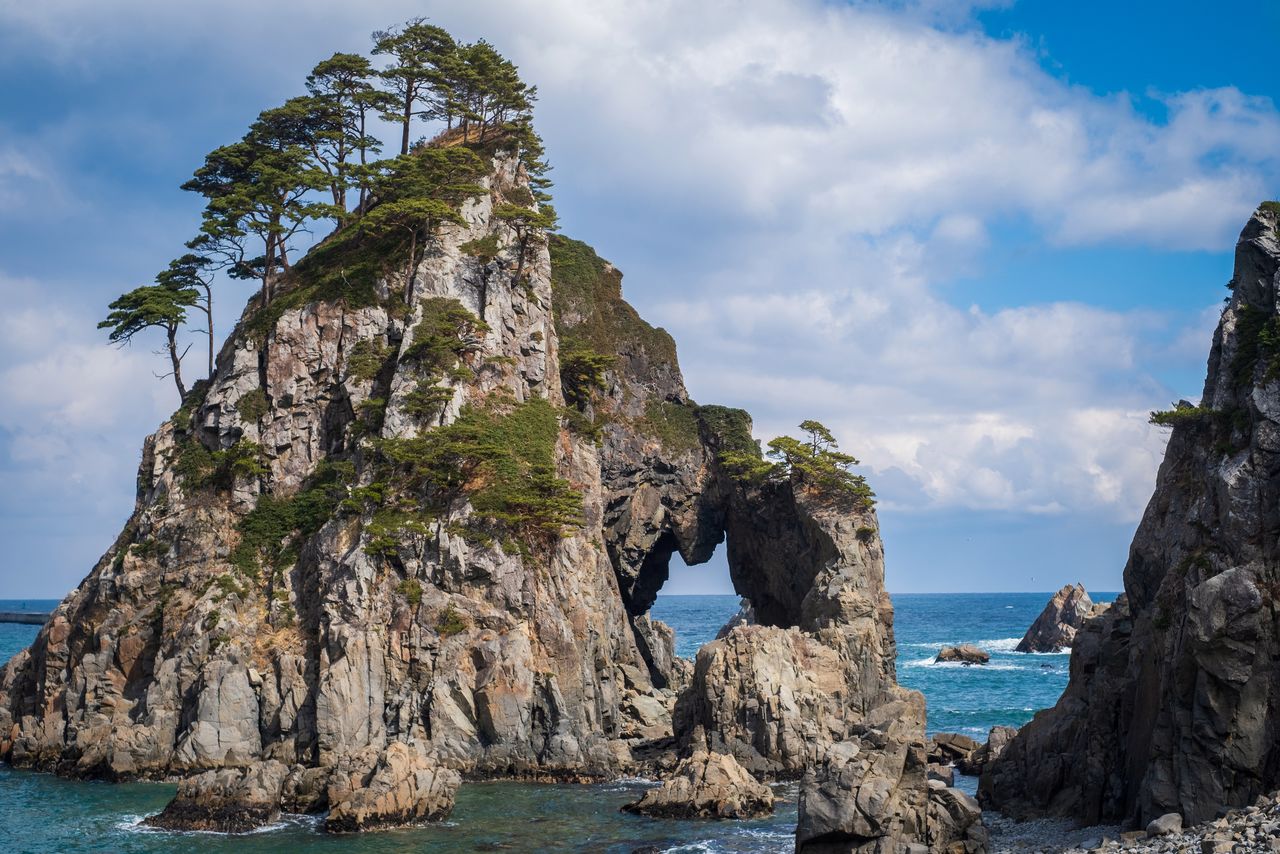 Kuji’s Kosode Kaigan is the site of reefs and interesting rock formations like Tsuriganedō (pictured) and Kabutoiwa. (© Pixta) 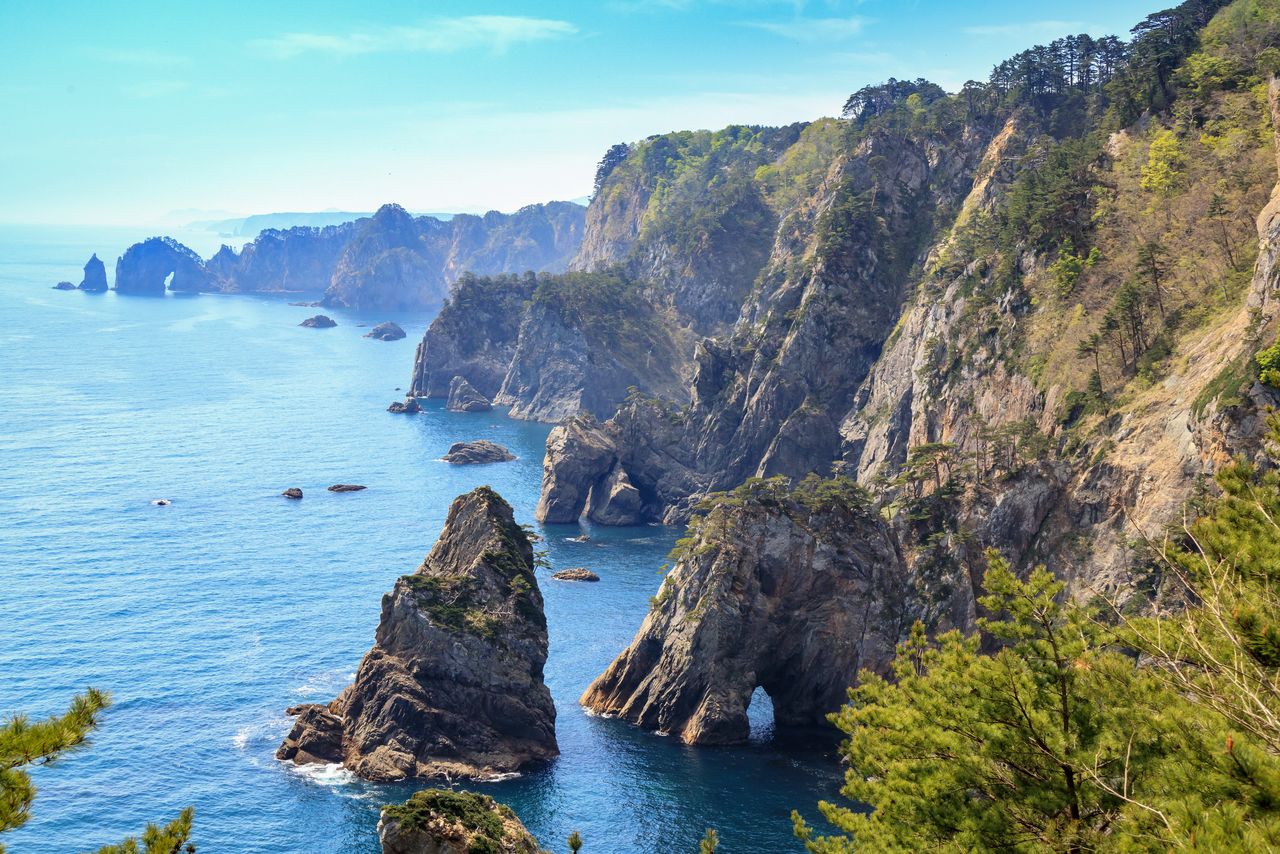 The cliffs at Kitayamazaki in Iwate Prefecture tower up to 200 meters above the sea. (© Pixta) 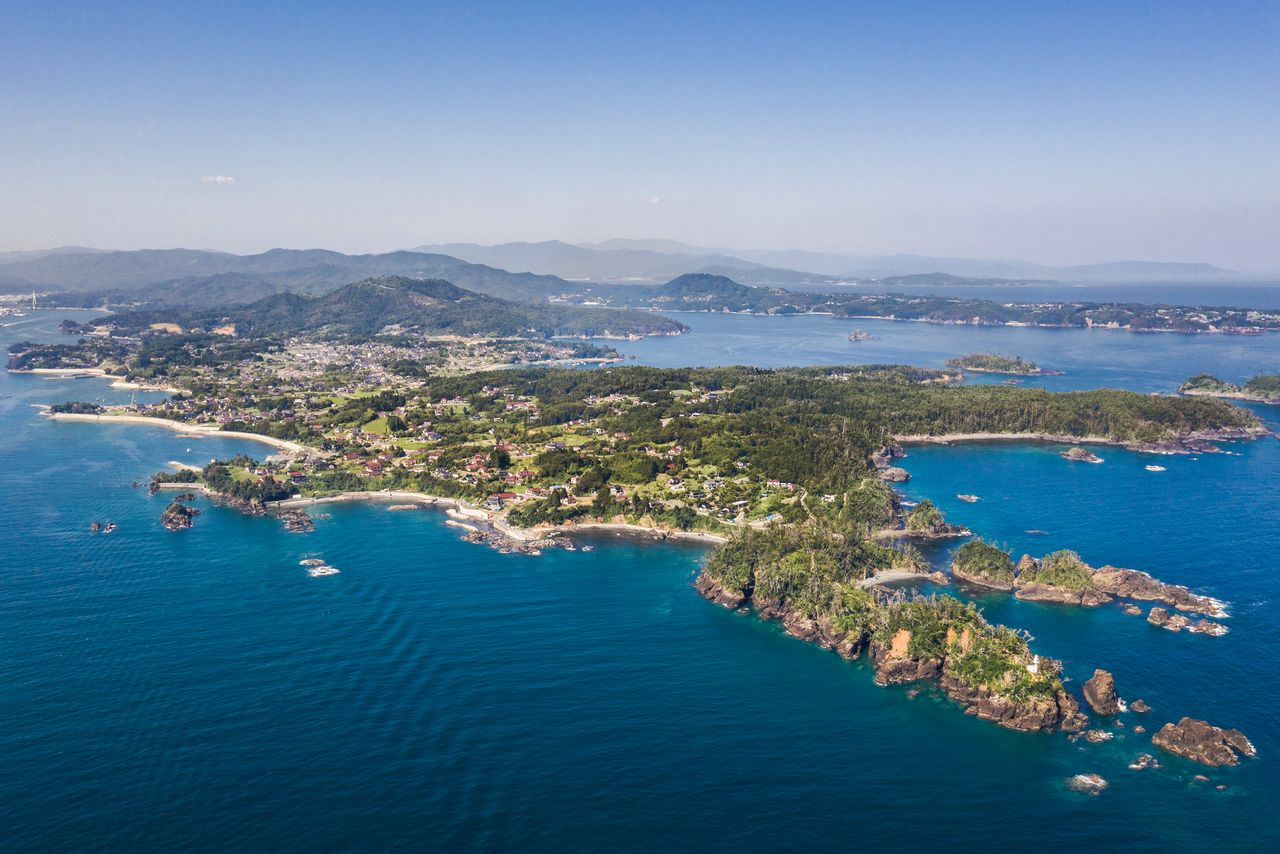 Oshika Peninsula, the southernmost point of the park, offers fine views of Onagawa Bay. Kinkasan, an island just offshore to the southeast, is a place of unspoiled nature on a par with that of the noted pilgrimage sites of Aomori Prefecture’s Osorezan and the three sacred mountains of Dewa in Yamagata Prefecture. Kesennuma, Rikuzen-Takata, and other cities have preserved remains of the 2011 disaster and also have memorial parks and remembrance halls that are dedicated to the memory of victims as well as teach about the perils of tsunami.

Visitors to Sanriku Fukkō National Park can enjoy splendid panoramas and delicious seafood while also viewing the progress made in rebuilding the region since 2011. Many of its newer attractions focus on disaster preparedness. 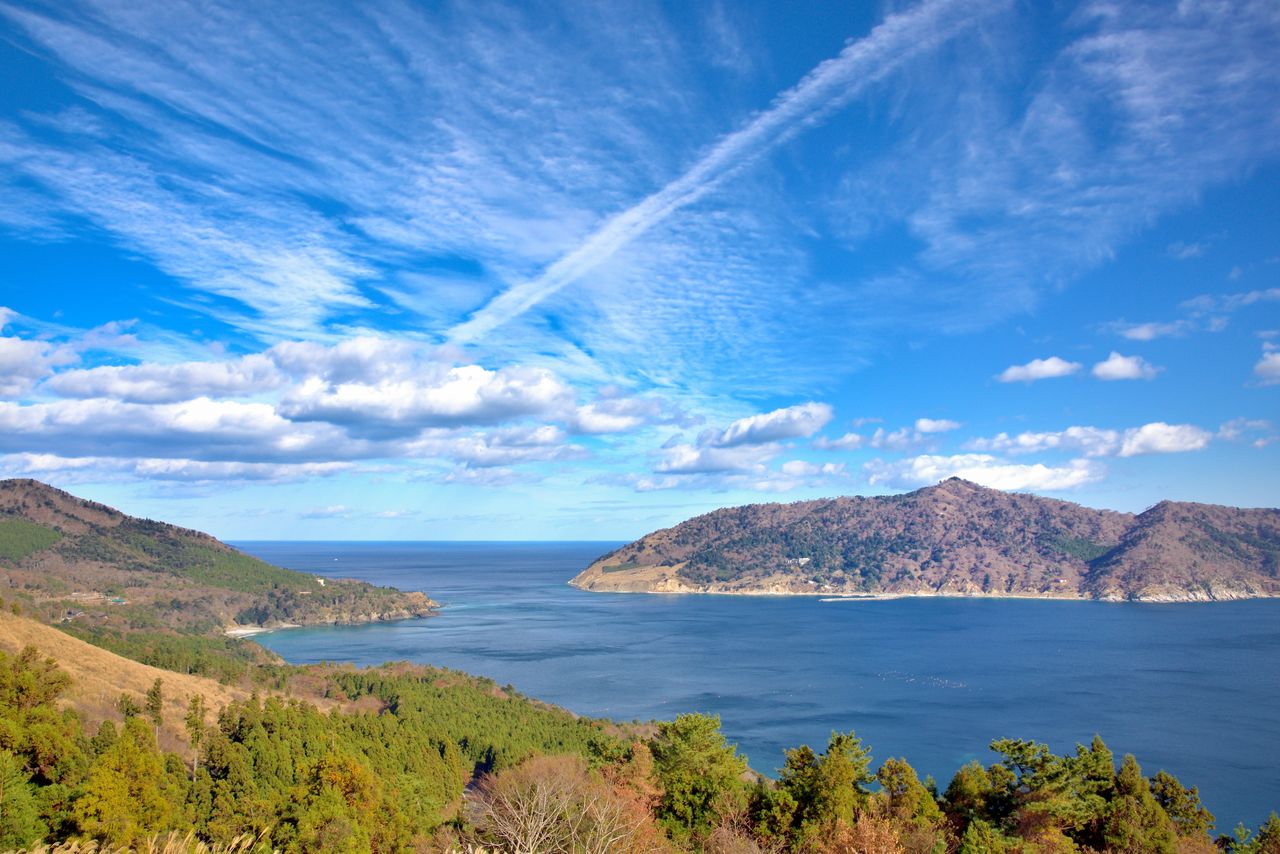 The view from Gobansho Park on the Oshika Peninsula, with Kinkasan to the right. (© Pixta) 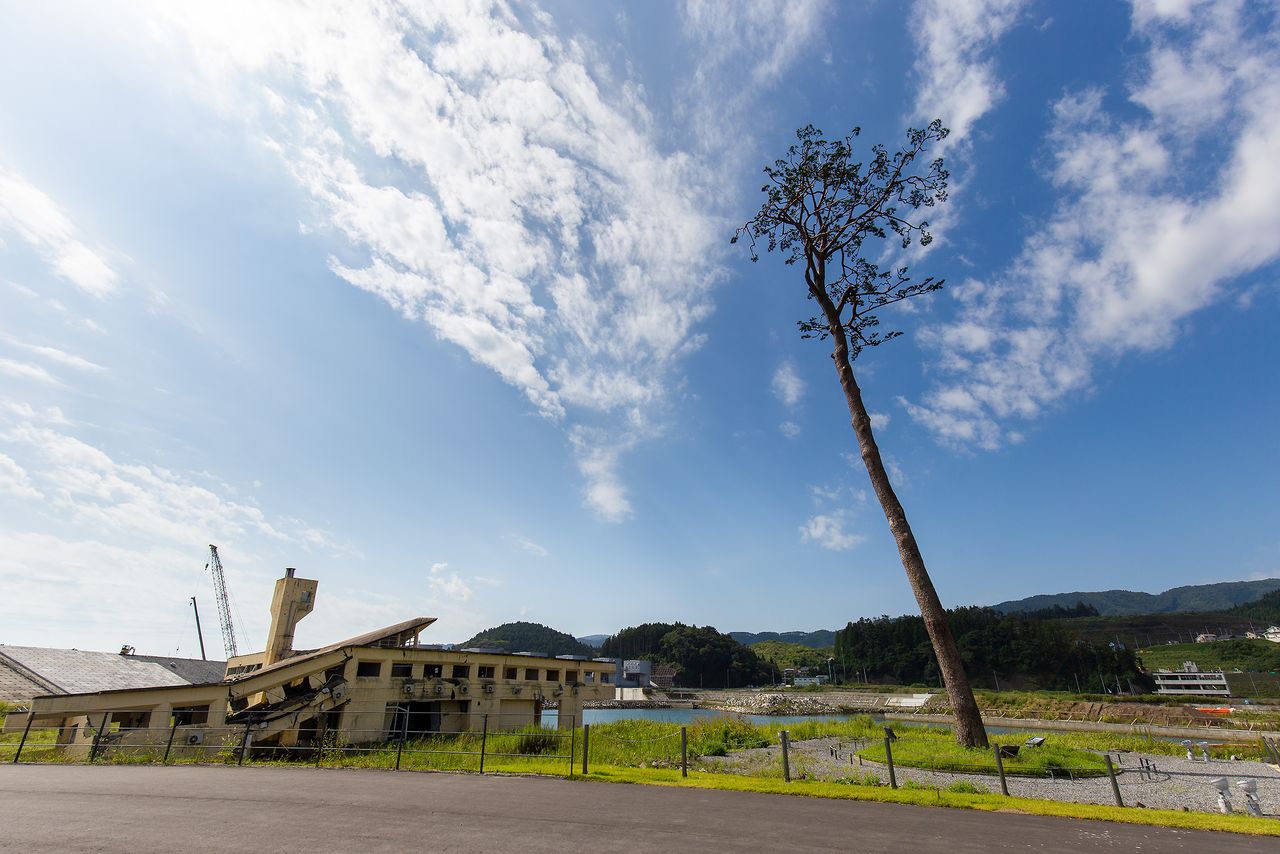 The remnants of the Rikuzen-Takata Youth Hostel, destroyed by the tsunami, and the “Miracle Pine,” the lone surviving tree out of thousands that grew along the shore. (© Nippon.com) 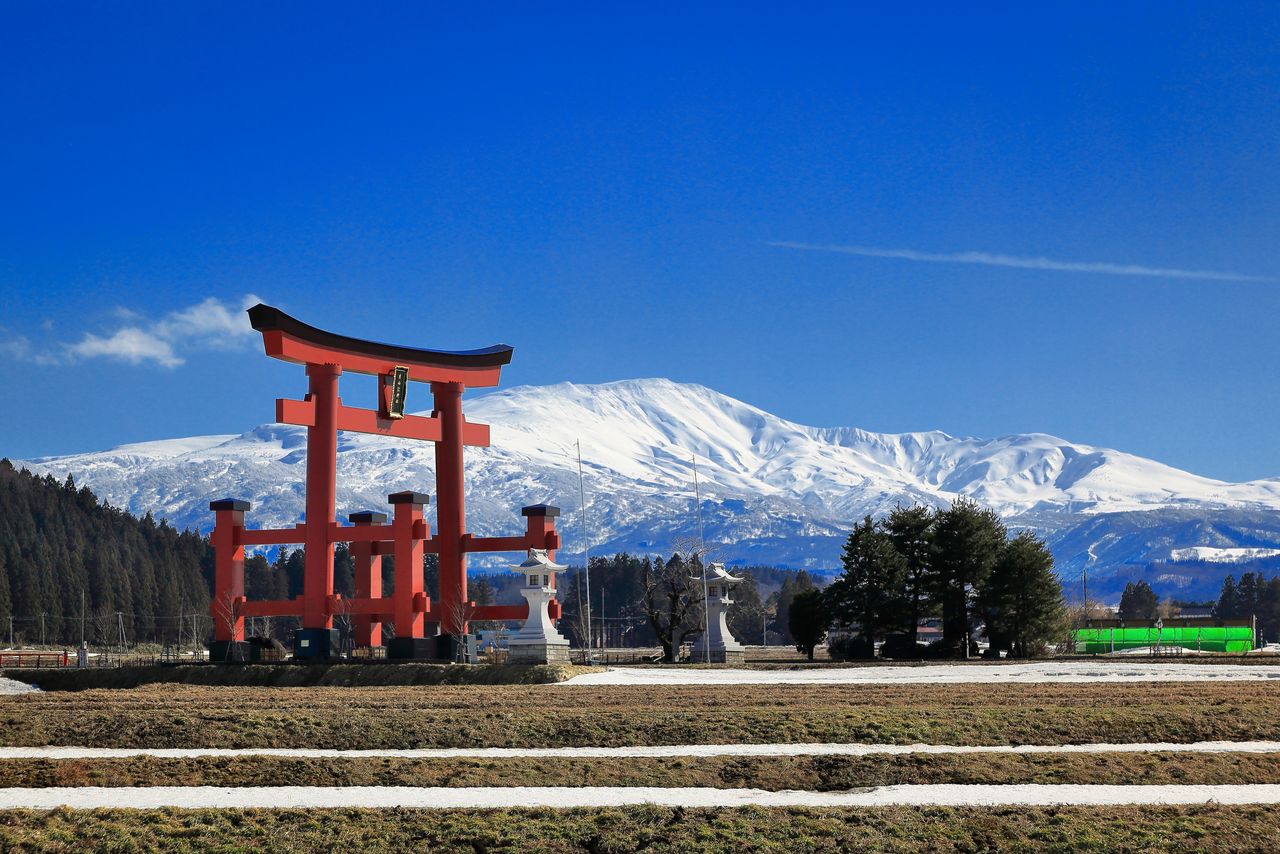 Bandai-Asahi National Park encompasses a huge expanse of territory, including the three sacred mountains of Dewa in Yamagata Prefecture and the flora- and fauna-rich Asahi Mountains to the west. It is also home to the picturesque Iide Mountains, the Azuma Mountains with their popular recreation spots, 1,816-meter Mount Bandai, and scenic Lake Inawashiro in Fukushima Prefecture.

Dewa Sanzan is the collective name for three shrines: Gassan Shrine, atop 1,984-meter Mount Gassan; Ideha Shrine, at the top of 414-meter Mount Haguro; and Yudono Shrine, partway up 1,500-meter Mount Yudono. These sites are centers for the ascetic mountain practice of shugendō. The area attracts worshippers and history buffs to the shrines, and visitors also come to enjoy scenic sites like Midagahara, a volcanic plateau on the north side of Mount Gassan. 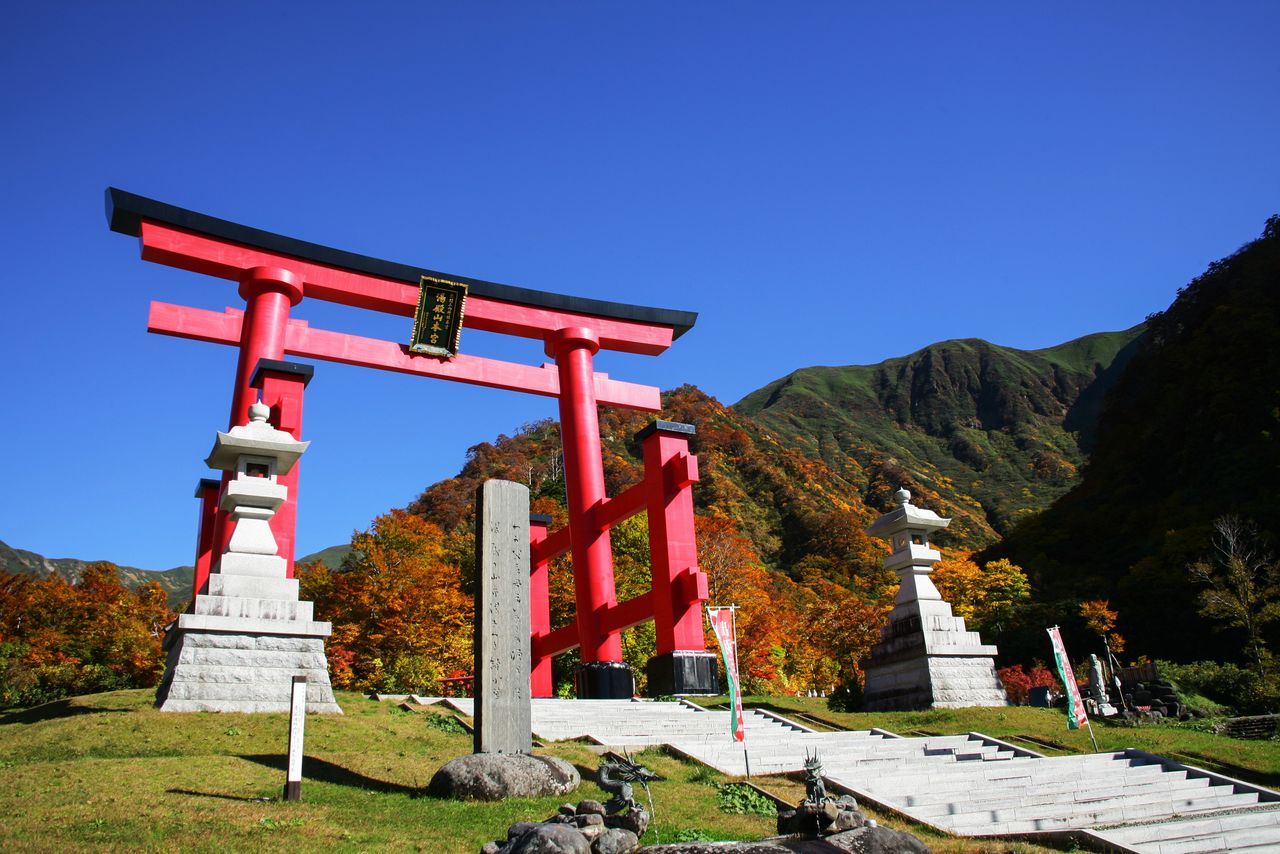 The gigantic torii at Mount Yudono. 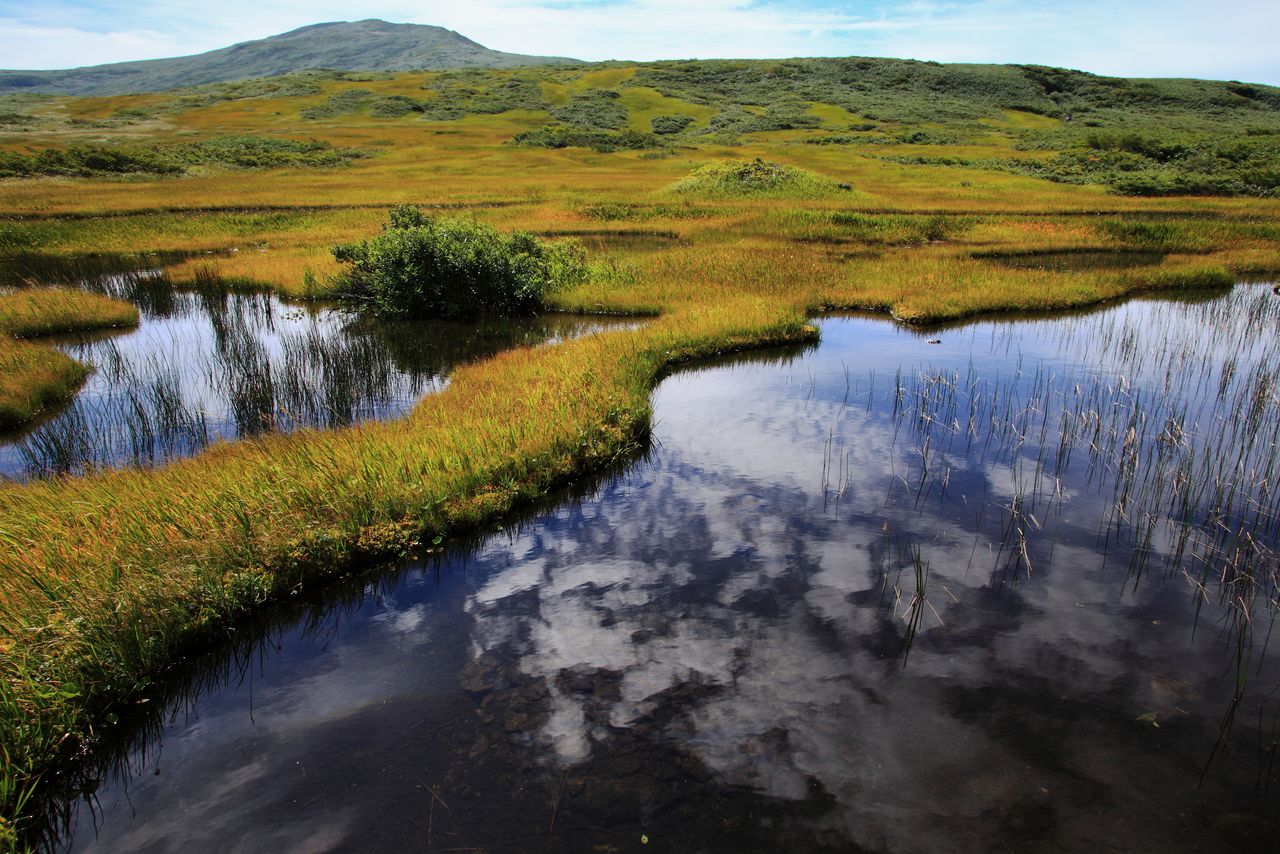 The Midagahara wetlands at the eighth station of Mount Gassan. (© Pixta)

The Asahi-Iide Mountains have deep, ancient forests of Japanese beech, and their high-altitude wetlands and grasslands are home to rare species of plants and insects that have managed to survive the harsh winter conditions.

In Fukushima Prefecture, the park includes Mount Bandai, the prefecture’s best-known landmark, and Lake Inawashiro. The Azuma Mountains include 1,707-meter Mount Azumakofuji, a volcano circled by a hiking trail, and 2,035-meter Mount Nishiazuma, the highest peak in the range. Access from Tokyo is good, making the area popular with tourists. Other attractions include the Goshikinuma volcanic lakes in Ura-Bandai north of Mount Bandai, Mount Adatara, and the hot spring spas at Tsuchiyu and Takayu. 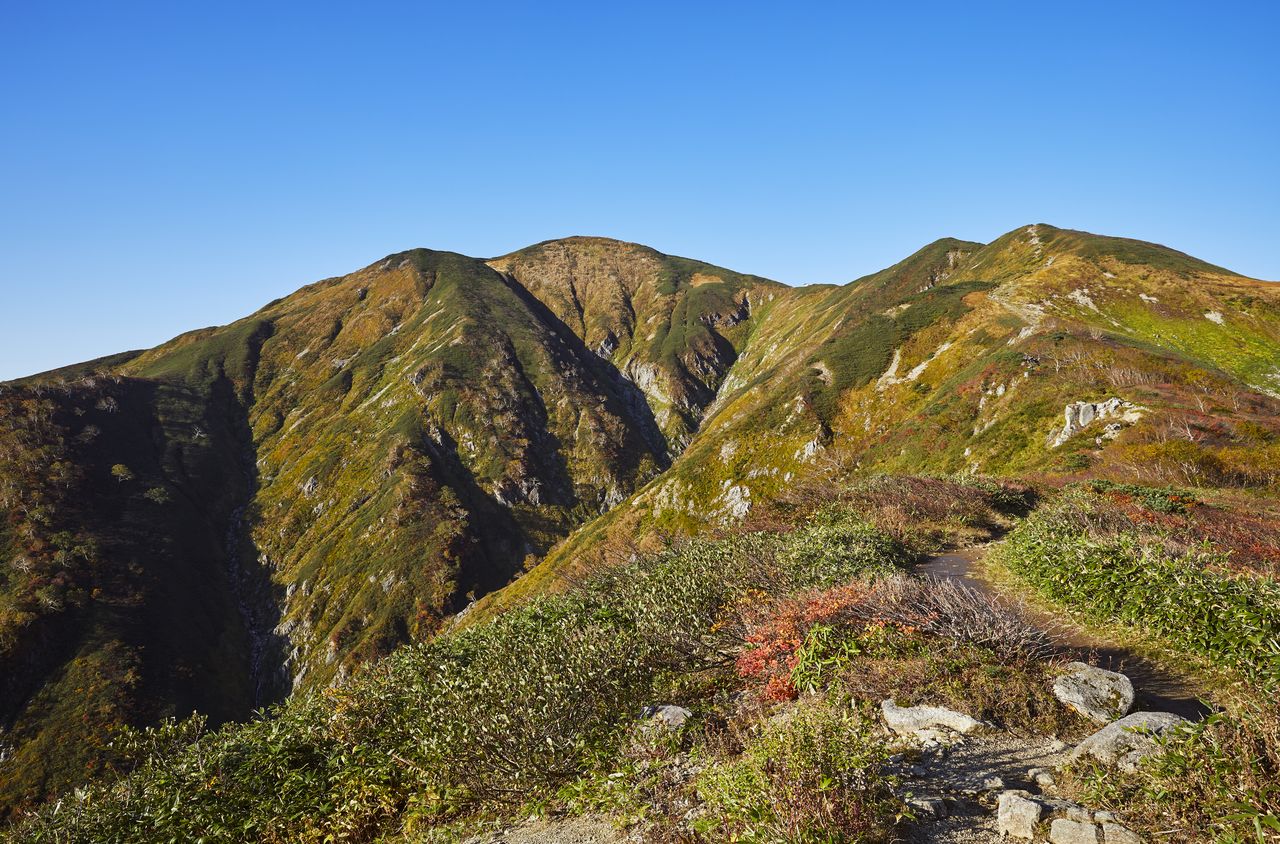 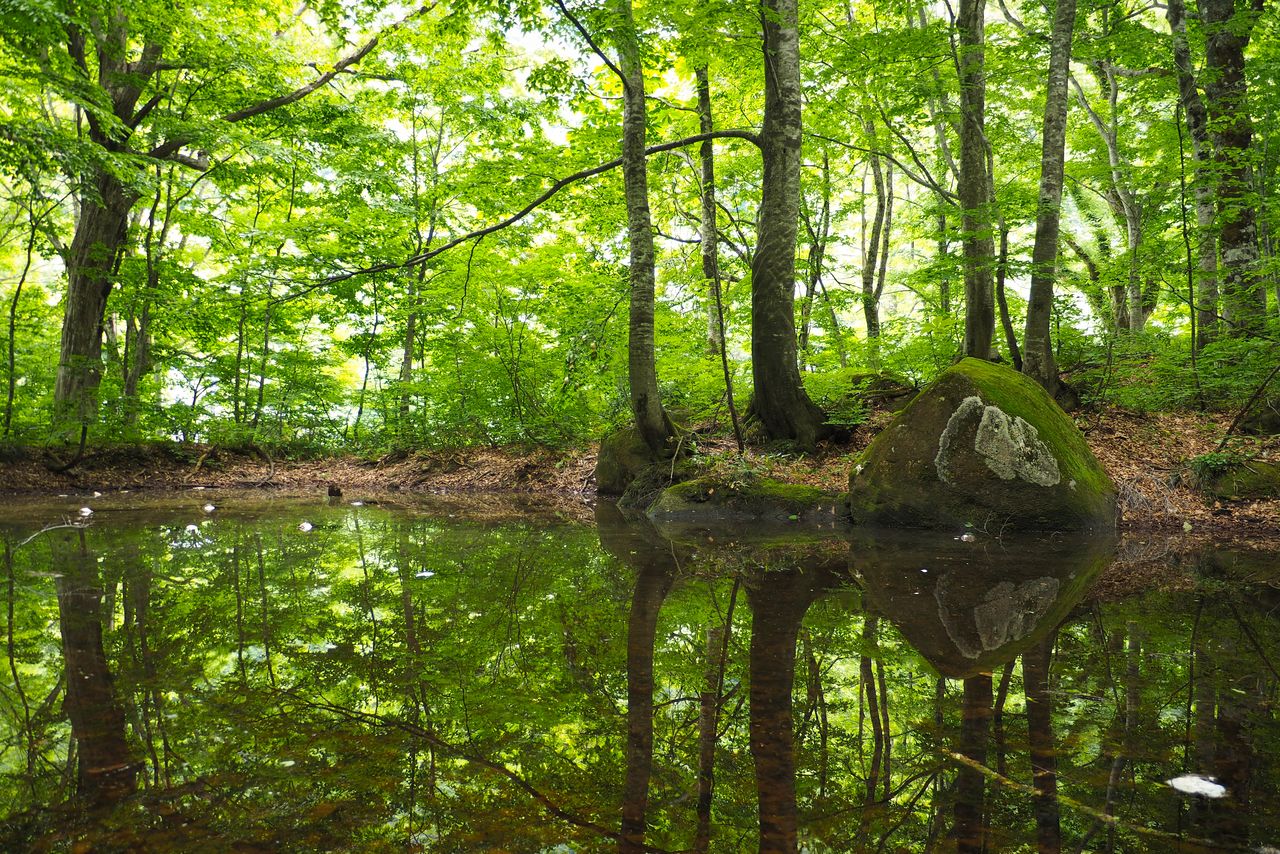 The beech forest at Nukumidaira in the foothills of the Iide Mountains. (© Pixta) 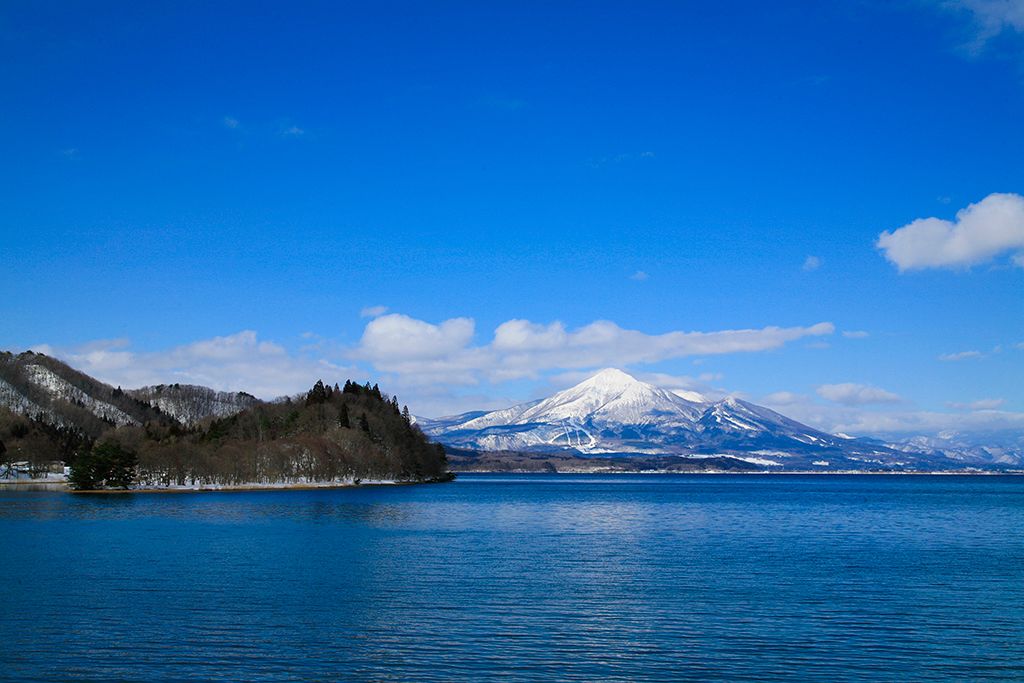 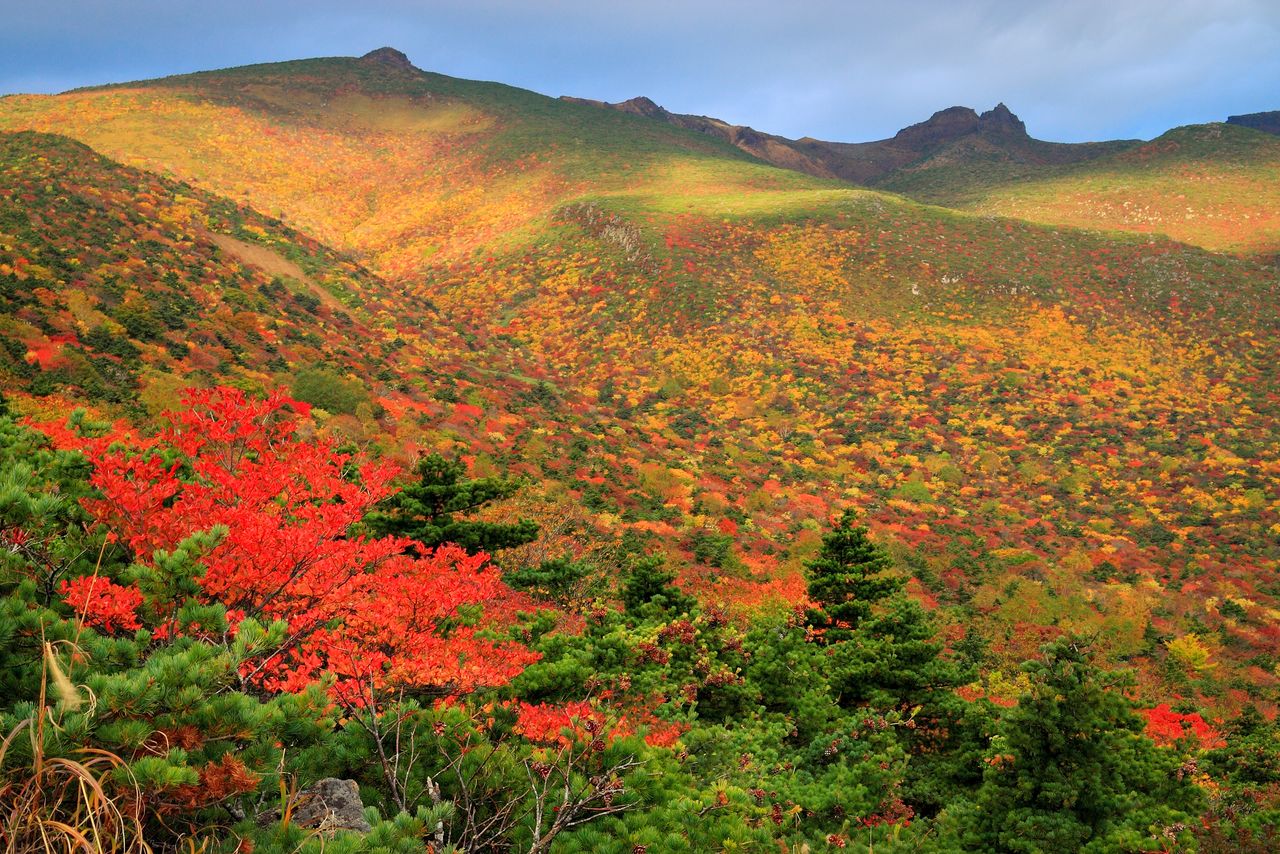 Autumn colors on Mount Adatara. A ropeway runs to the top of the mountain. (© Pixta)

(Originally published in Japanese. Banner photo: A view of Mount Bandai from one of the five Goshikinuma lakes. © Pixta.)