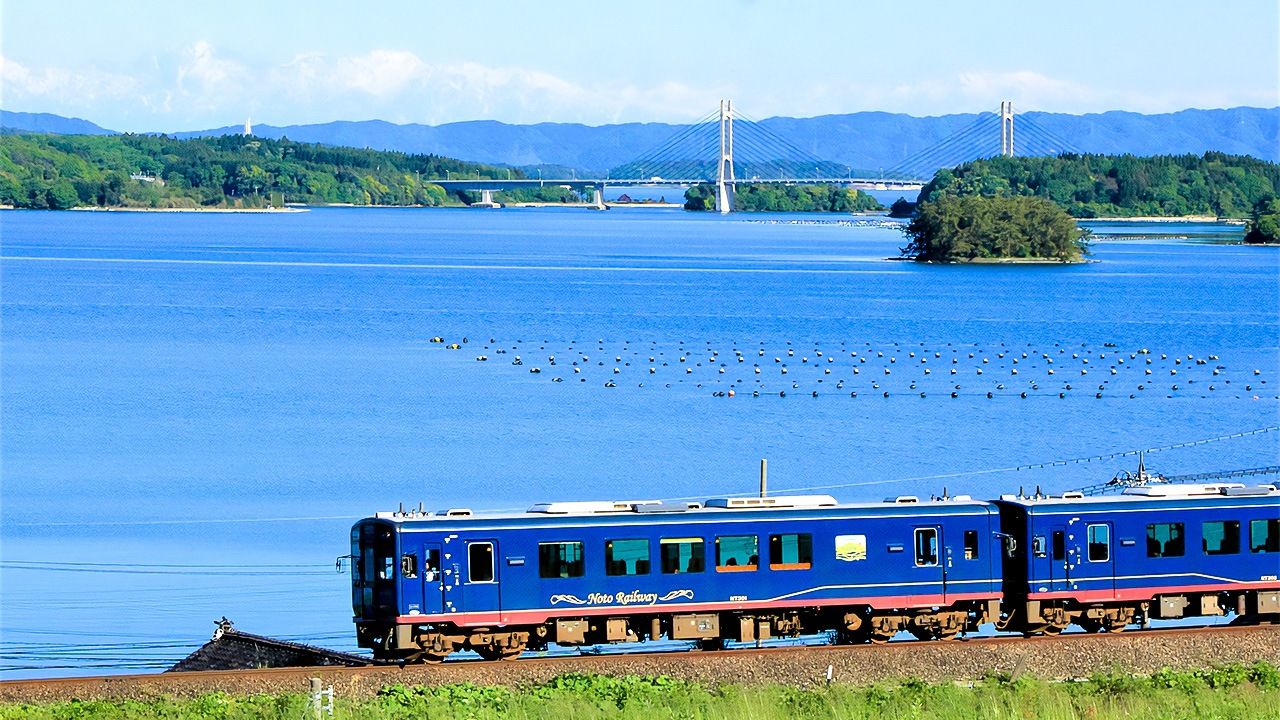 Guide to Japan Dec 22, 2022
A new sightseeing train offers travelers a chance to sit back and enjoy the sites and local flavors of the Noto Peninsula. We recently took a ride on the line, the Noto Satoyama Satoumi, which trundles through picturesque rural landscape as it passes along the coastline of Nanao Bay.

The Noto Peninsula in Ishikawa Prefecture sets roughly midway on the main island of Honshū, jutting into the Sea of Japan like an upturned thumb. Its two coastlines offer intriguingly different scenery, with dramatic rock formations and sheer cliffs on the west and placid shores on the east.

Visitors to the eastern section of the peninsula can enjoy a leisurely tour on the sightseeing train Noto Satoyama Satoumi, which runs along the calm waters of Nanao Bay. The train makes its journey between Nanao and Anamizu Stations at the leisurely pace, taking an hour, 20 minutes longer than the regular local train, and offering picturesque views of farmland, sea, and nearby Noto Island. 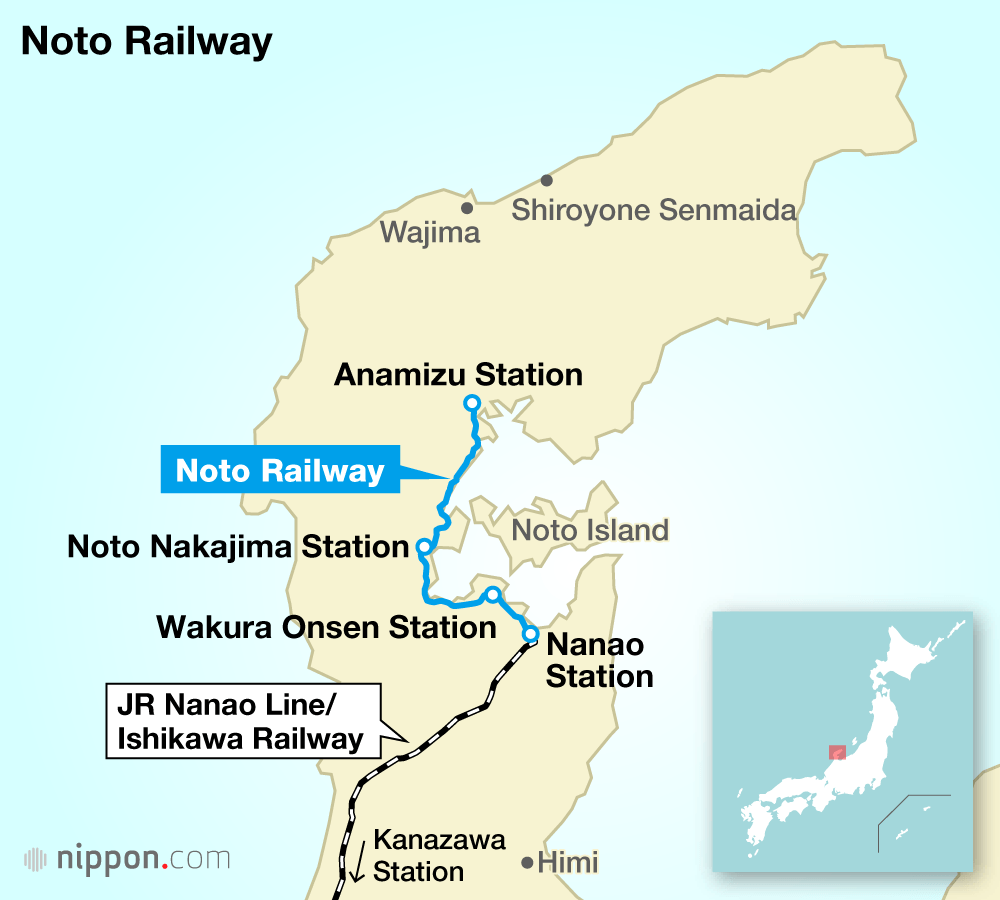 Nanao Station, the starting point for the Satoyama Satoumi, is 1 hour and 30 minutes from Kanazawa Station on the IR Ishikawa Railway Nanao Line. 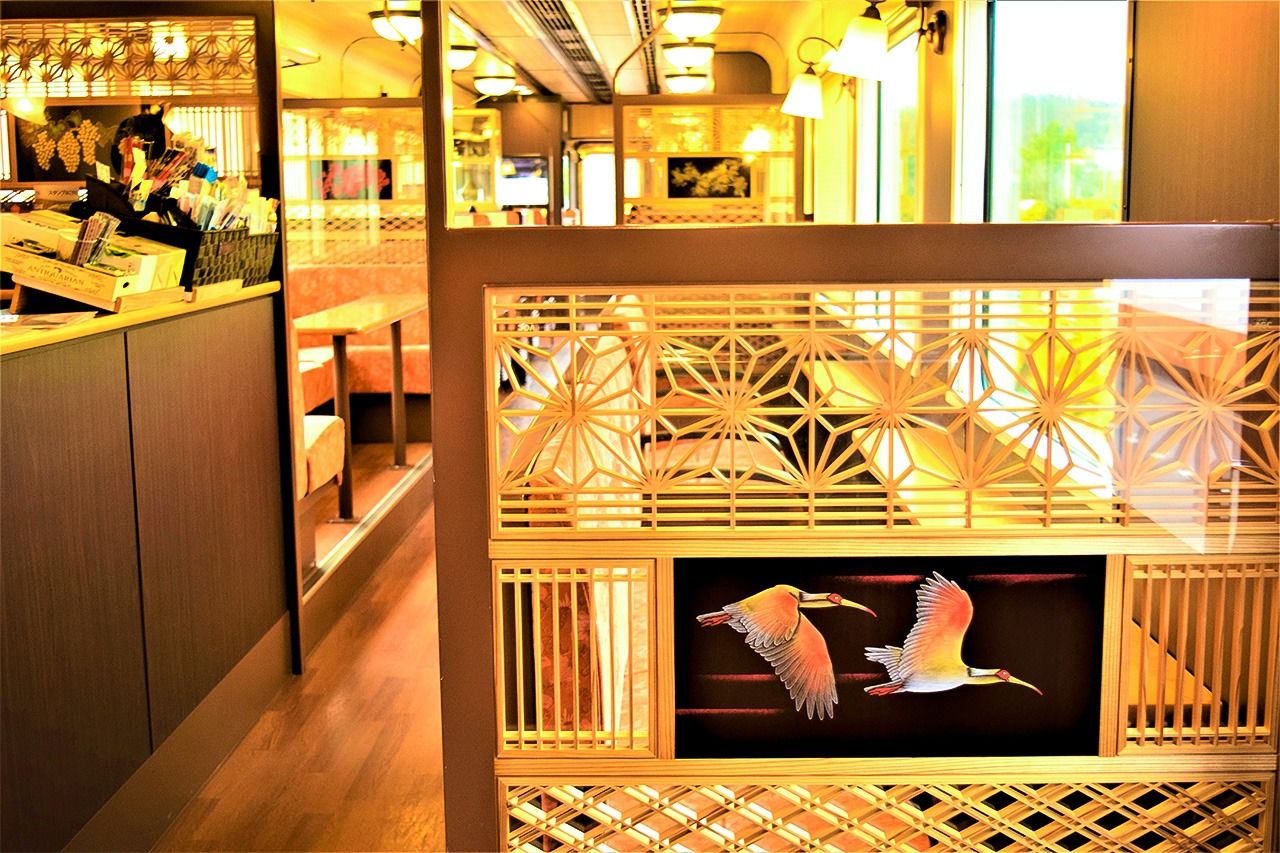 The rail cars include gallery space for showcasing traditional crafts. 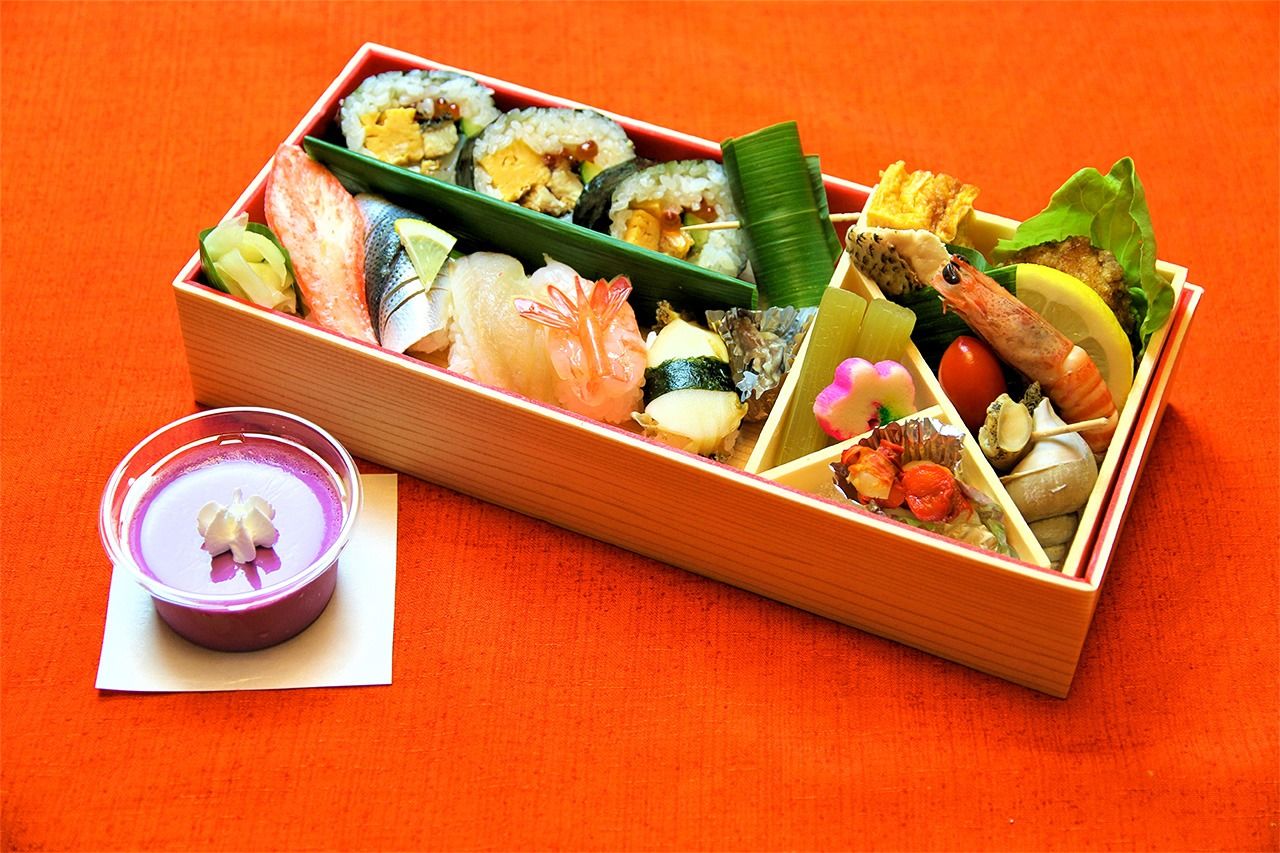 Passengers can reserve a bentō for their trip featuring sushi from Wakura Onsen’s famed Nobuzushi (train fare + ¥3,050). A selection of sweets is also available by prior reservation (train fare + ¥2,030).

The train makes a 15-minute stop at Noto Nakajima Station, where sightseeing passengers can alight and experience the history of the line by visiting a retired railway mail car displayed on a siding. 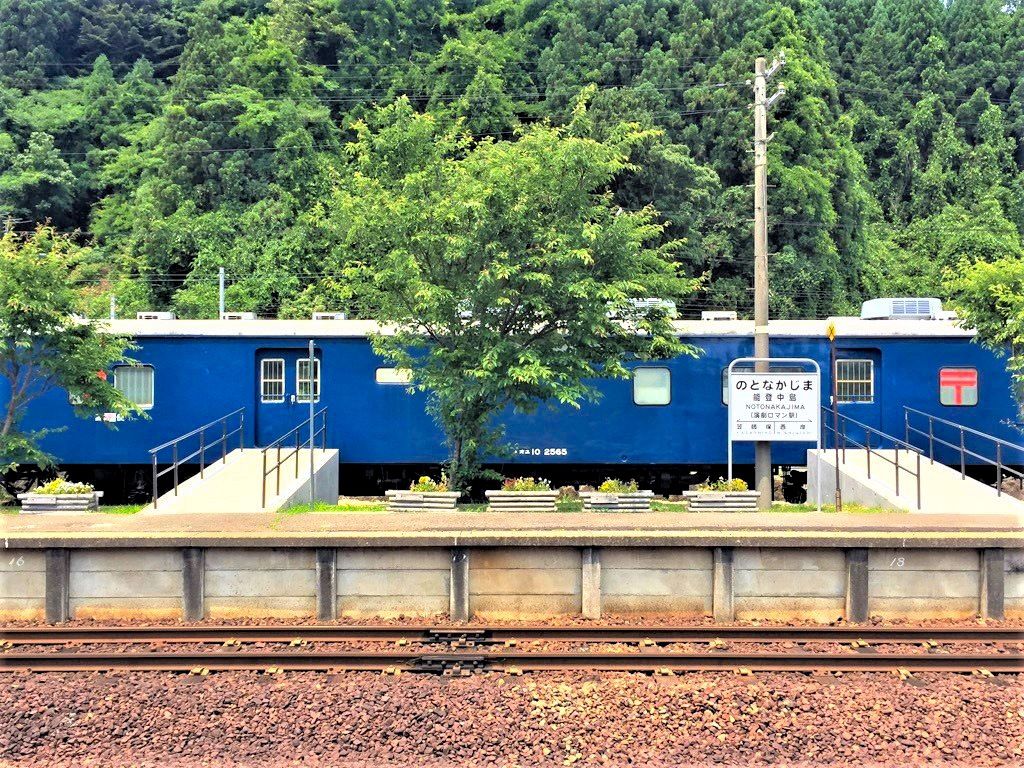 The railway mail car, one of only two still remaining in the country, was in service until 1986. 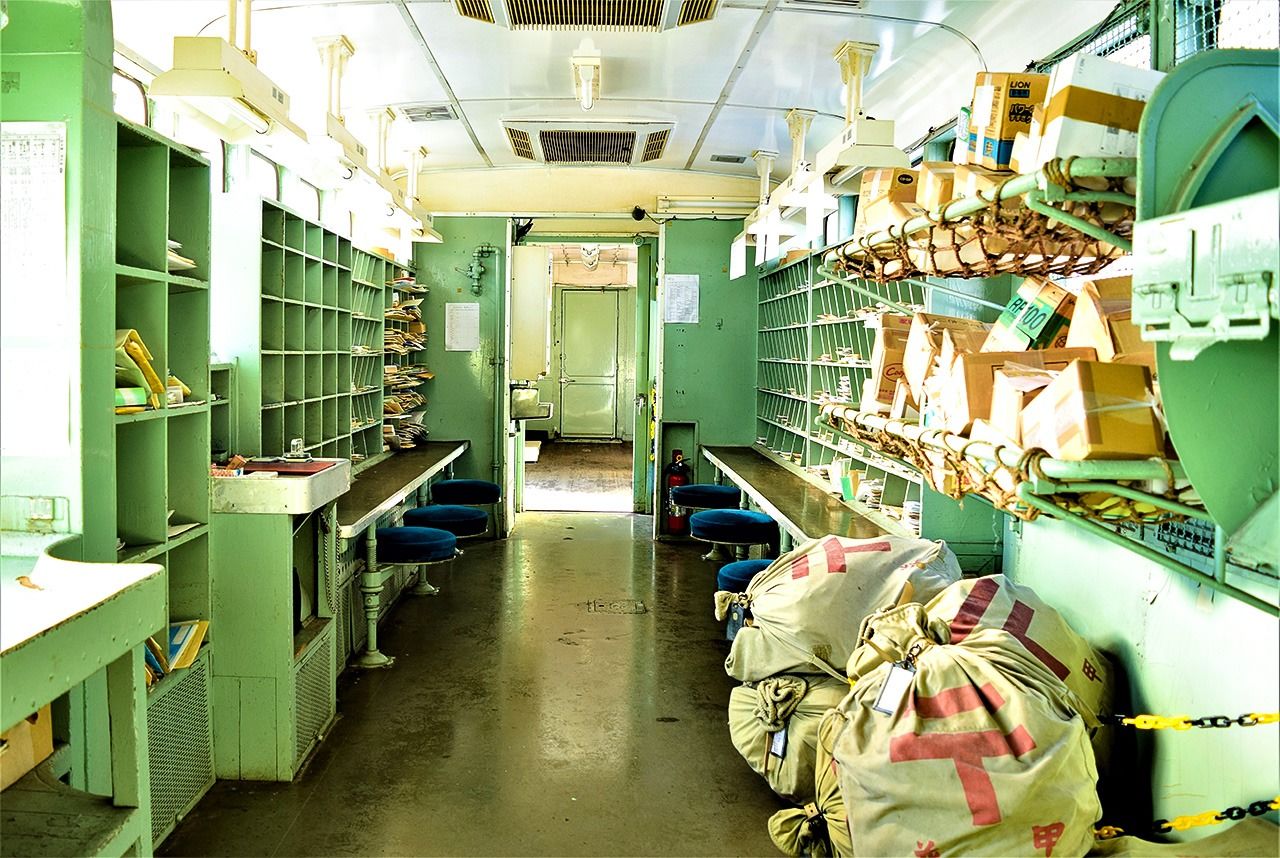 The mail sorting space inside the car. Stamped postcards placed in the mailbox there will be delivered with a special postmark.

After leaving Noto Nakajima, the train weaves through satoyama scenery before Nanao Bay comes into view again. The route to Anamizu follows the coast, and the train makes brief stops at three scenic spots along the way. 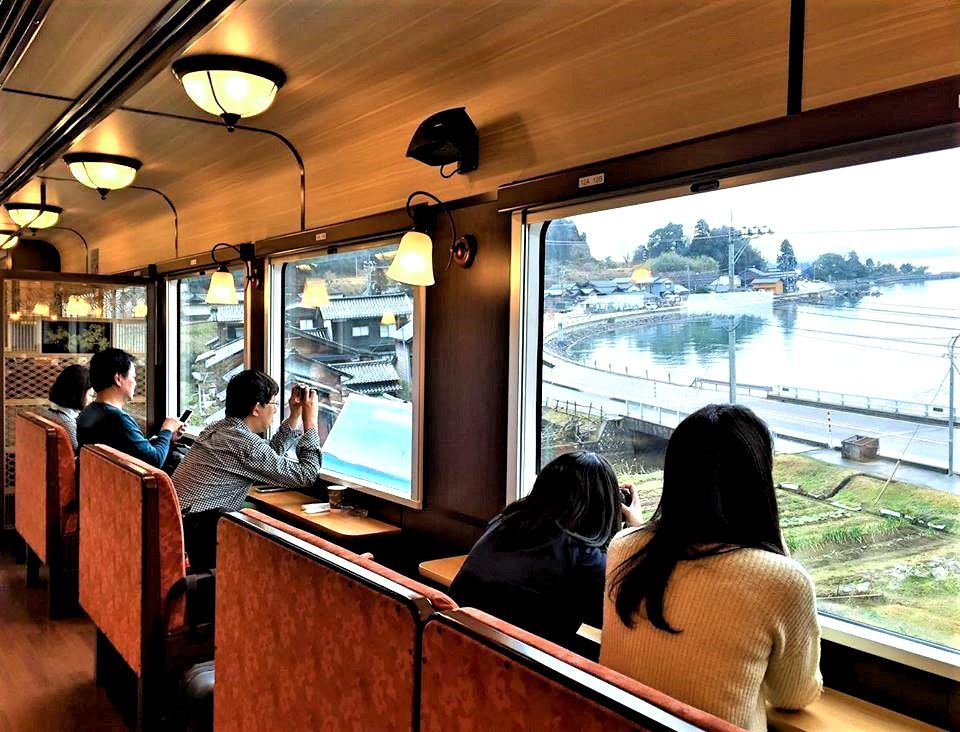 The car has four-person box seats as well as seats facing outward so that passengers can comfortably enjoy the view. 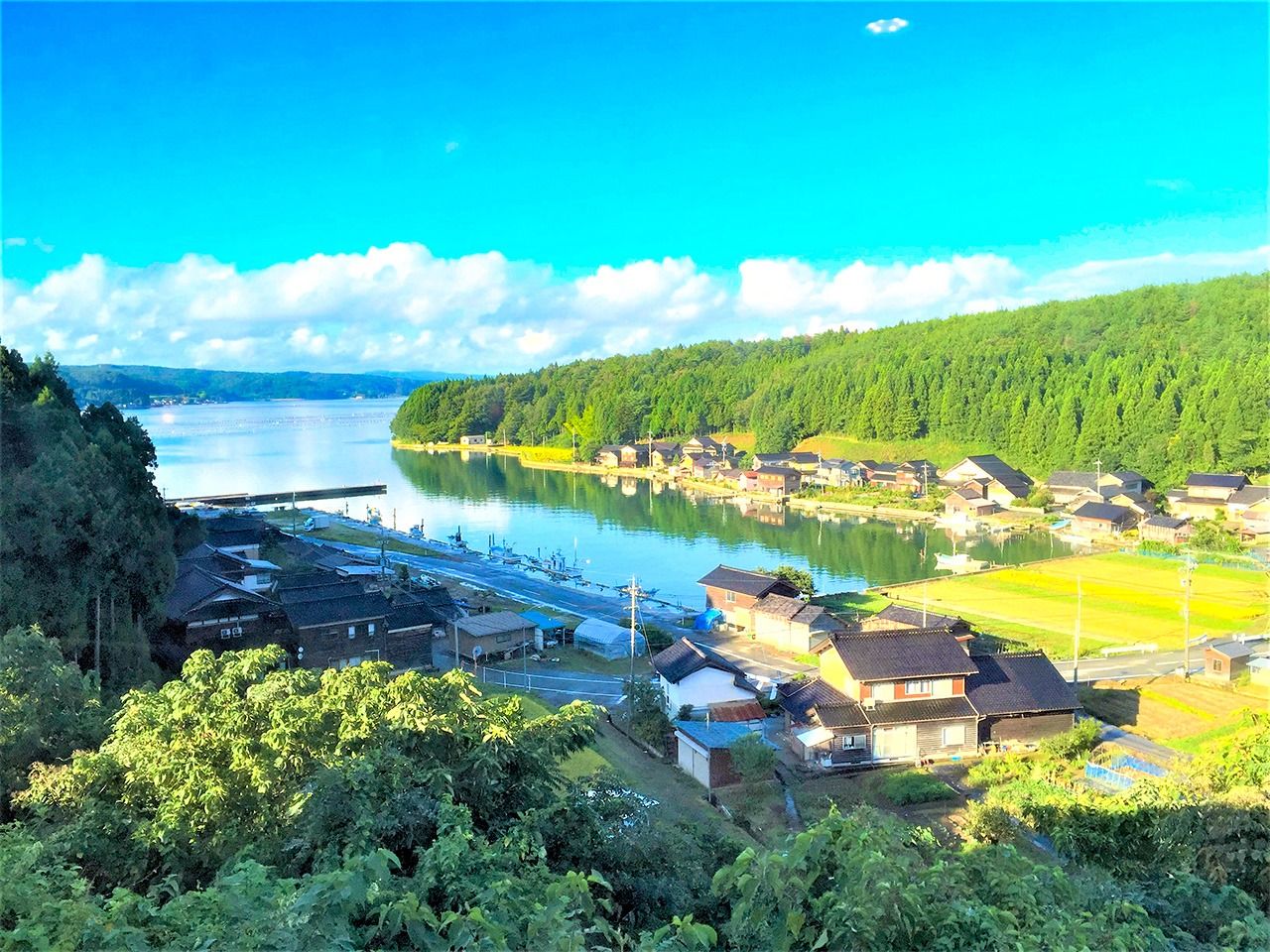 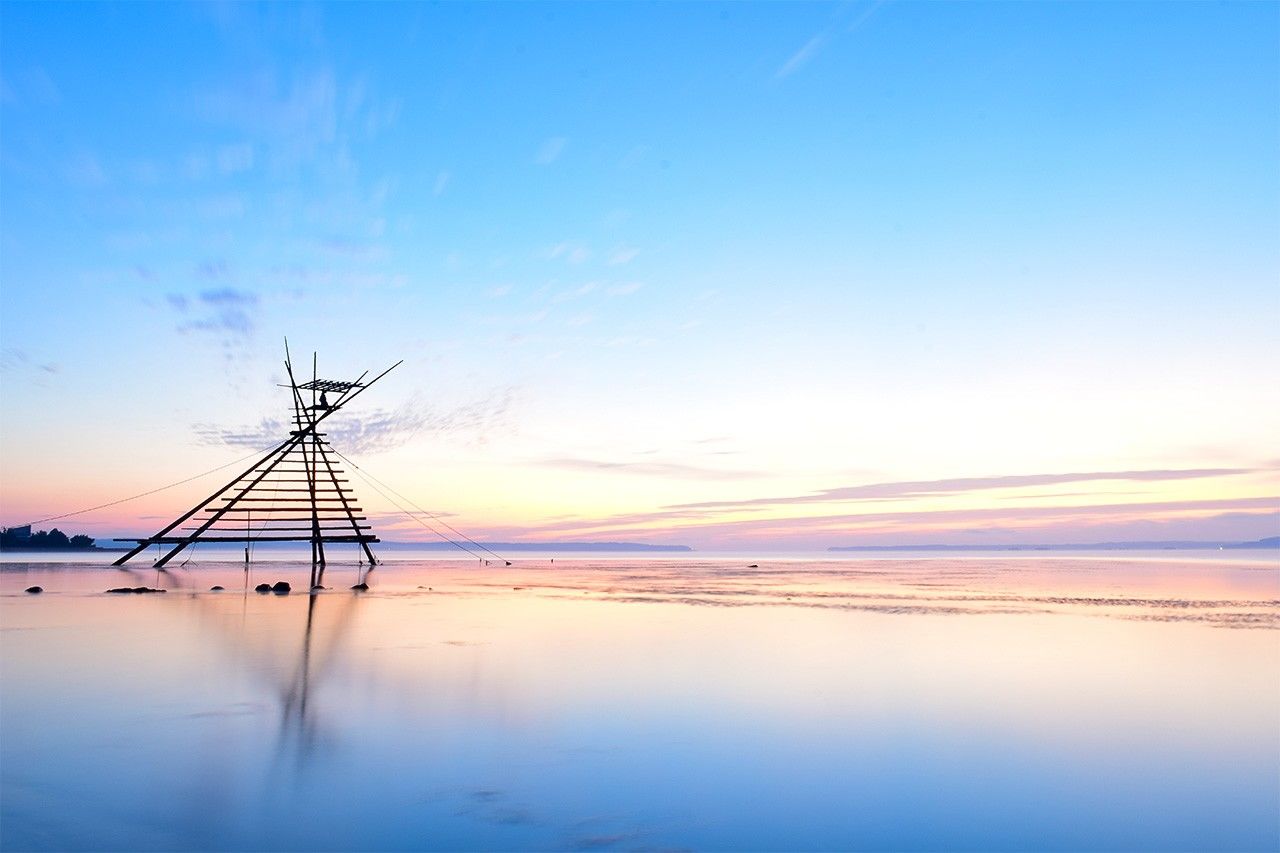 A traditional fishing stand overlooks Nanao Sea’s calm, mirror-like surface. Fishers wait atop the stand for bora, a type of mullet, to enter their nets. 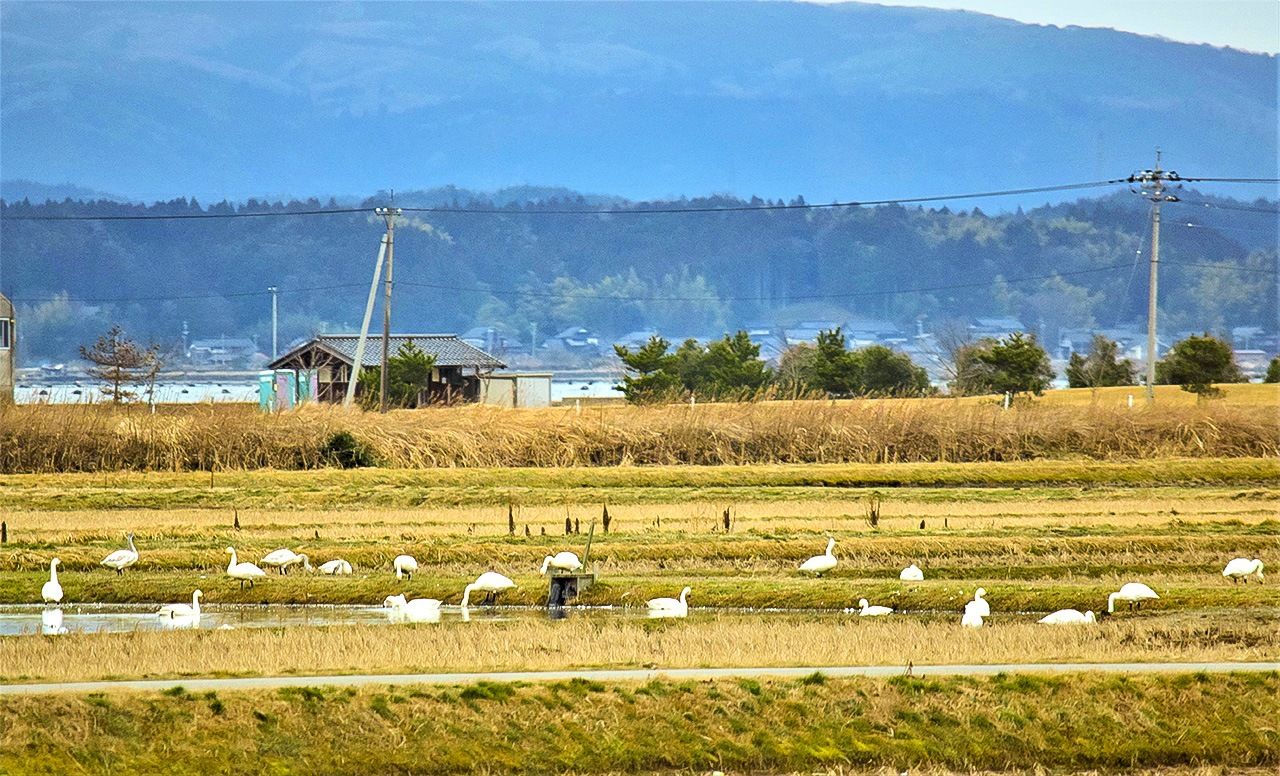 With barely time to drift off as they are lulled by the peaceful scenery, passengers arrive at Anamizu, the line’s terminal. There, oyster lovers can partake of their favorite treat, served sizzling hot, at restaurant Atsuatsu-tei. This eatery is operated by the railway and offers seating alongside the platform or above the tracks on the passenger overpass.

Farmed oysters normally take two or three years until they can be harvested, but thanks to the abundant plankton in Nanao Bay, local oysters are ready for market in just one year. Although somewhat on the small side, they are thick, juicy, and flavorful. 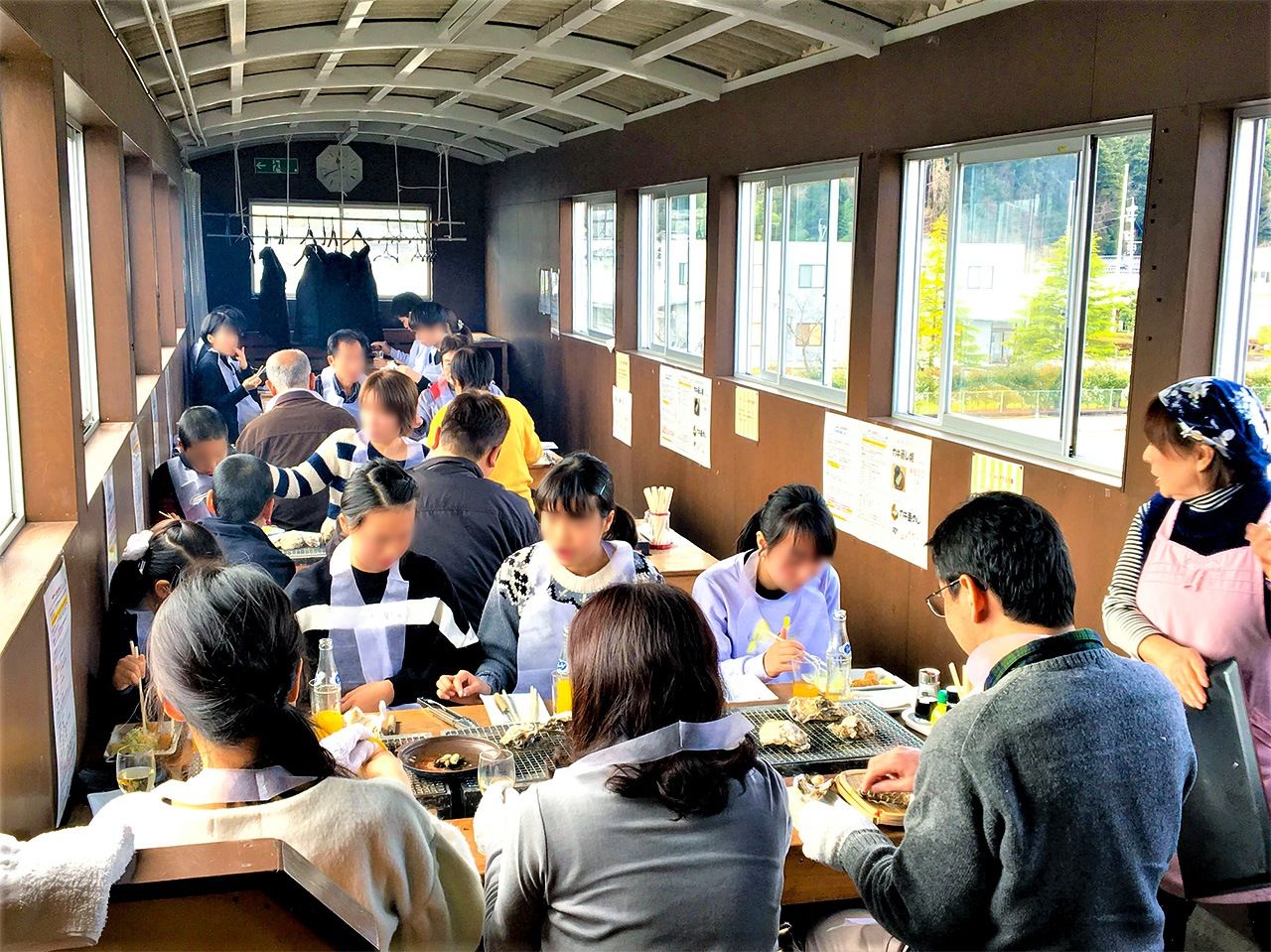 Atsuatsu-tei is open every year from mid-January to mid-March on weekends and public holidays. It is exclusive to Noto Satoyama Satoumi train passengers, but reservations are required.

A suggested itinerary for exploring Oku Noto is to travel from Nanao or Wakura Onsen to Anamizu by rail and head from there to Wajima by bus. After overnighting in Wajima, return to Anamizu by bus the next day and travel on to Nanao by local train. A two-day excursion ticket costing ¥3,000 is good for travel on the Noto Railway and Oku Noto buses and allows unlimited stops along the way.

Wajima is famous for its beautiful lacquerware and lively morning market. The Shiroyone Senmaida terraced rice paddies, just 20 minutes from Wajima Station by bus, are also a must-see attraction.

Carved into a hillside sloping down to the Sea of Japan, the Shiroyone Senmaida are a distinctive sight at any time of year, but particularly in autumn, when the rice ripens and turns golden, and winter, when snow traces the outlines of the paddies. The intricate geometric pattern formed by the rice paddies is the star attraction of the Noto Satoyama Satoumi, the first site in Japan to be registered under the Globally Important Agricultural Heritage Systems designation, in 2011. 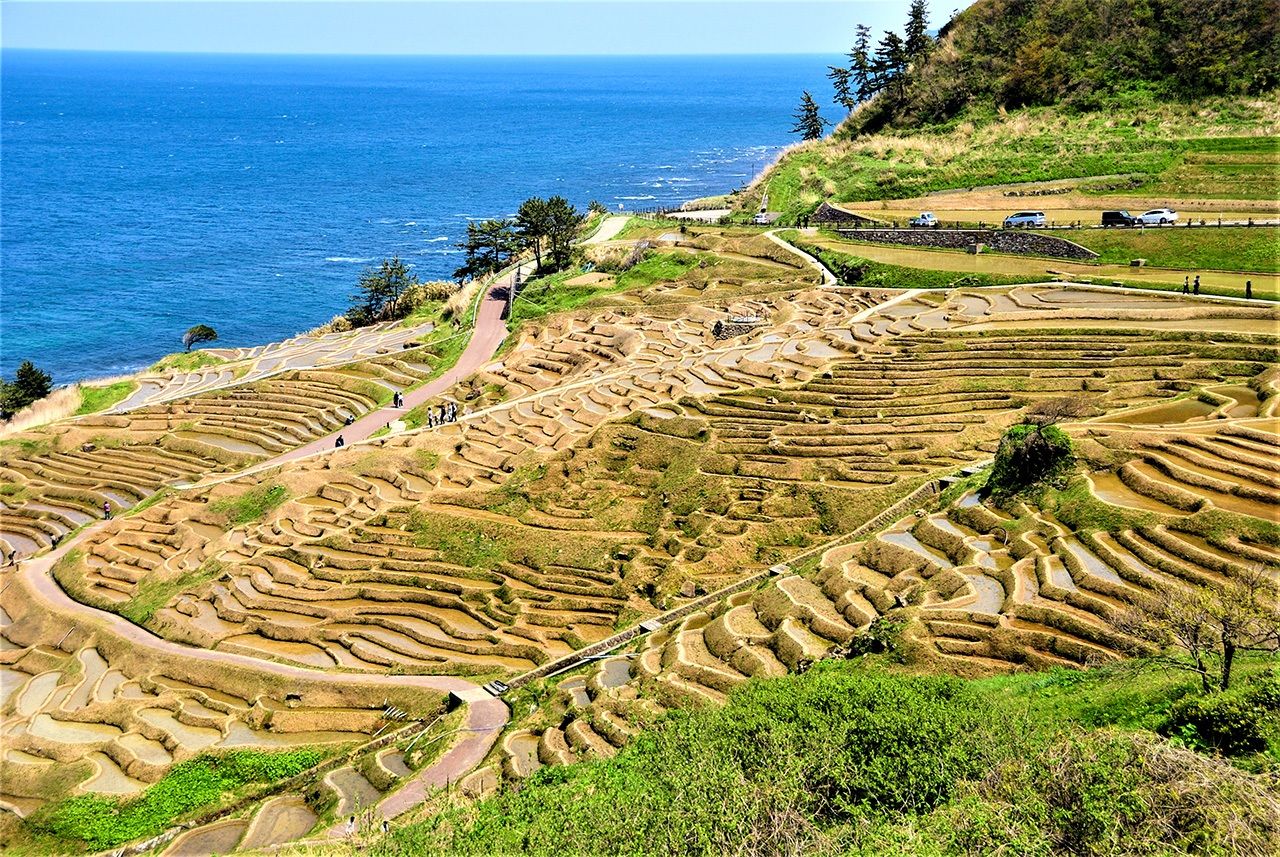 The four-hectare slope facing the sea holds 1,004 rice paddies, the smallest of which is only 50 centimeters square. All the work, from planting seedlings to harvesting the rice, is done by hand, as the paddies are too small to accommodate farm machinery. (© Pixta) 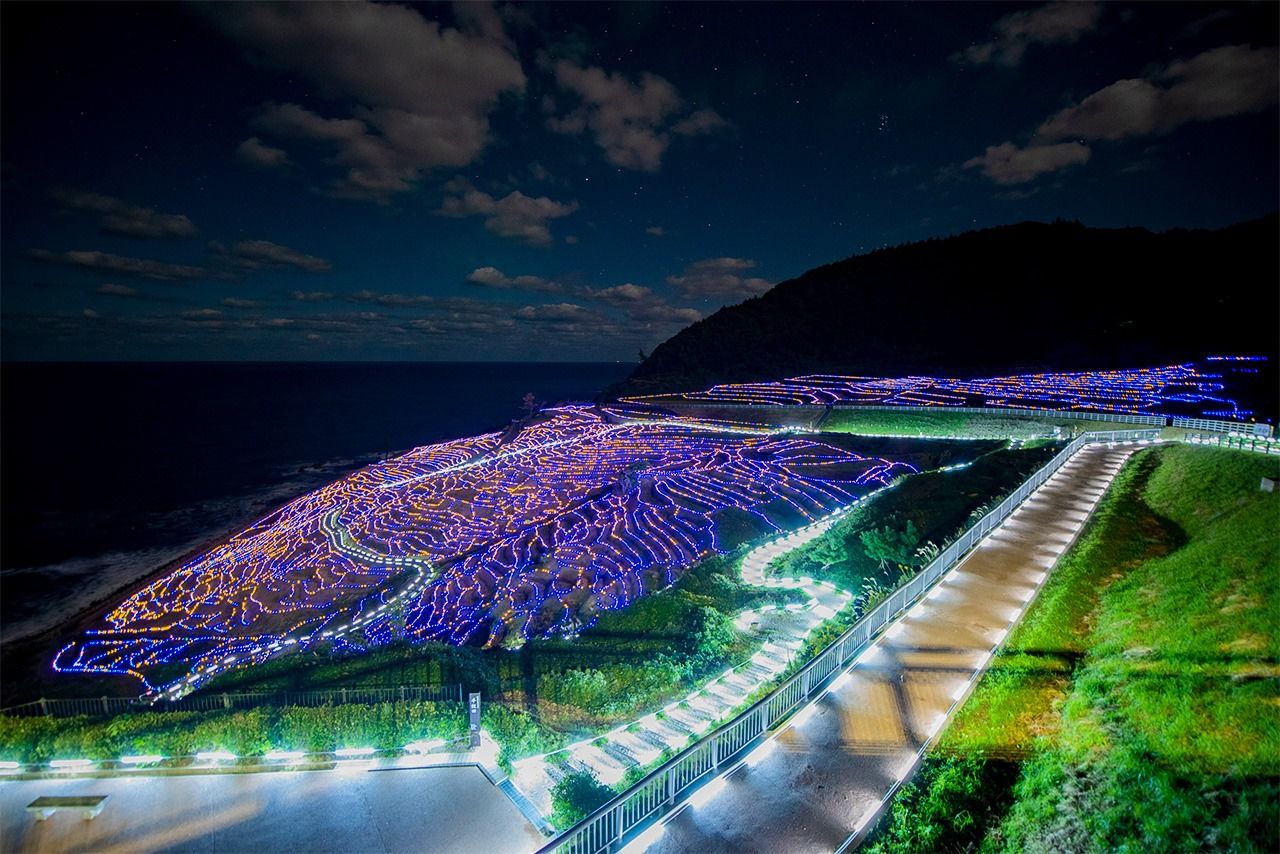 Stopping to take in the sunset on Nanao Bay on the way back from Wajima is another way to enjoy Oku Noto’s beauty. Disembarking at Wakura Onsen Station, one stop before Nanao, it is a 20-minute walk to the center of the hot spring resort. At Yuttari Park, located along the shore of the bay, there is a free footbath fed by the area’s thermal springs, from where visitors can leisurely soak their feet while watching through the pine trees the sun set over Noto Island, shading the horizon pinkish-orange. 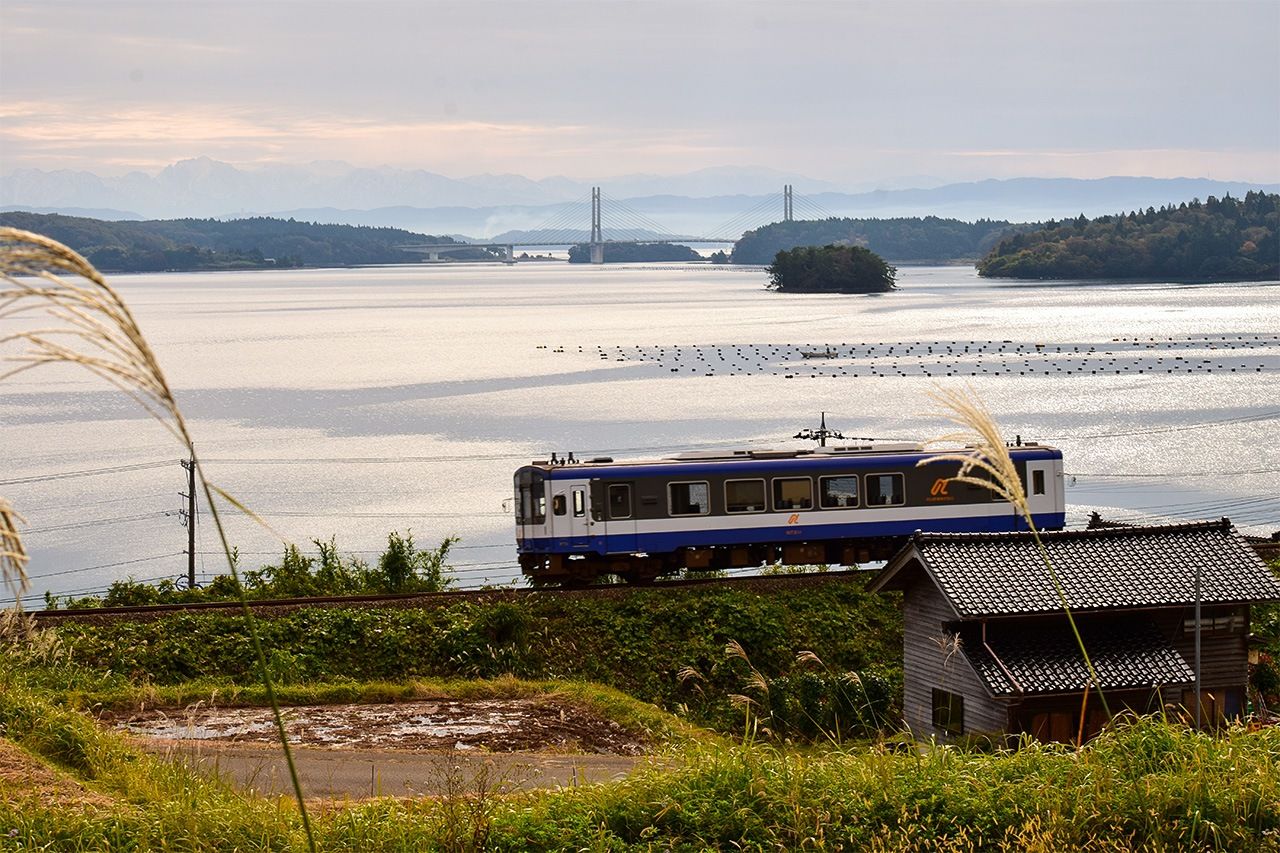 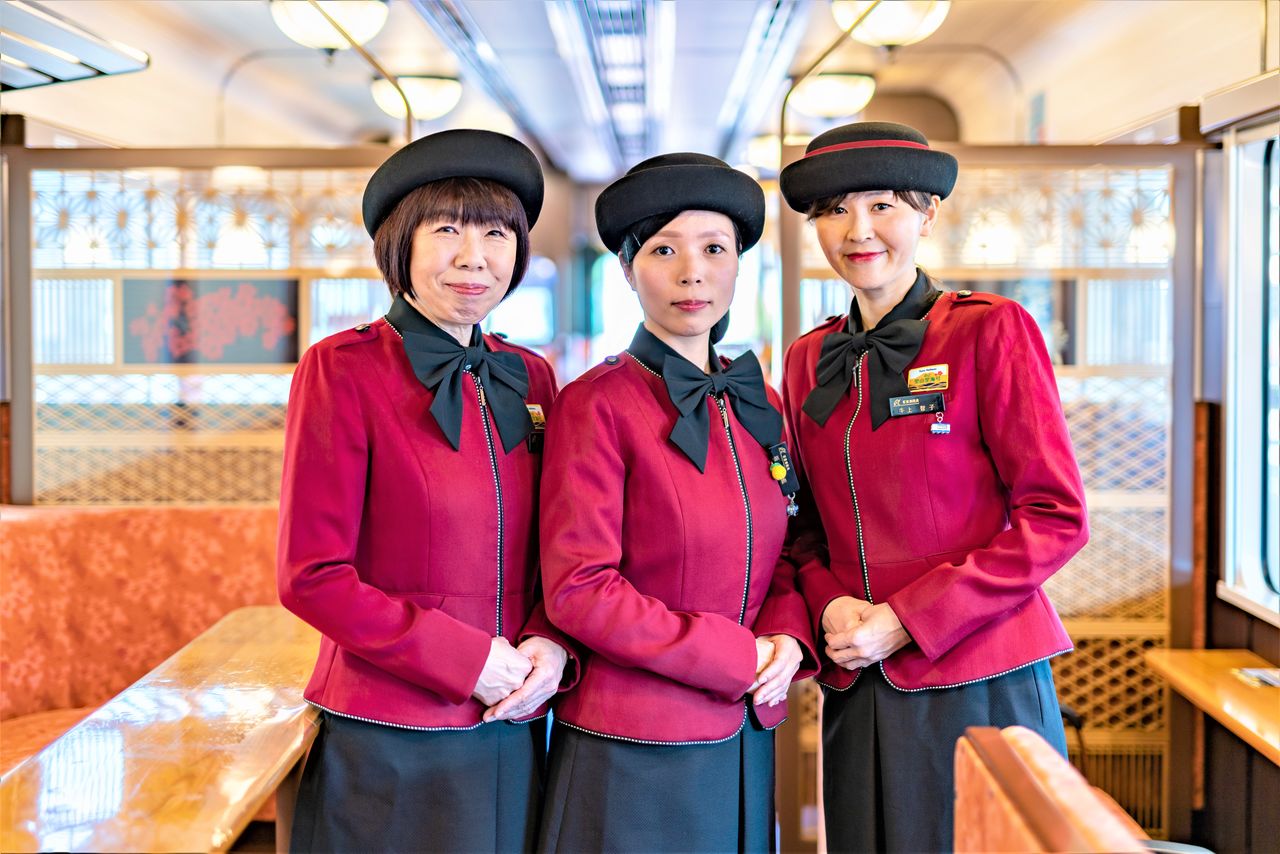