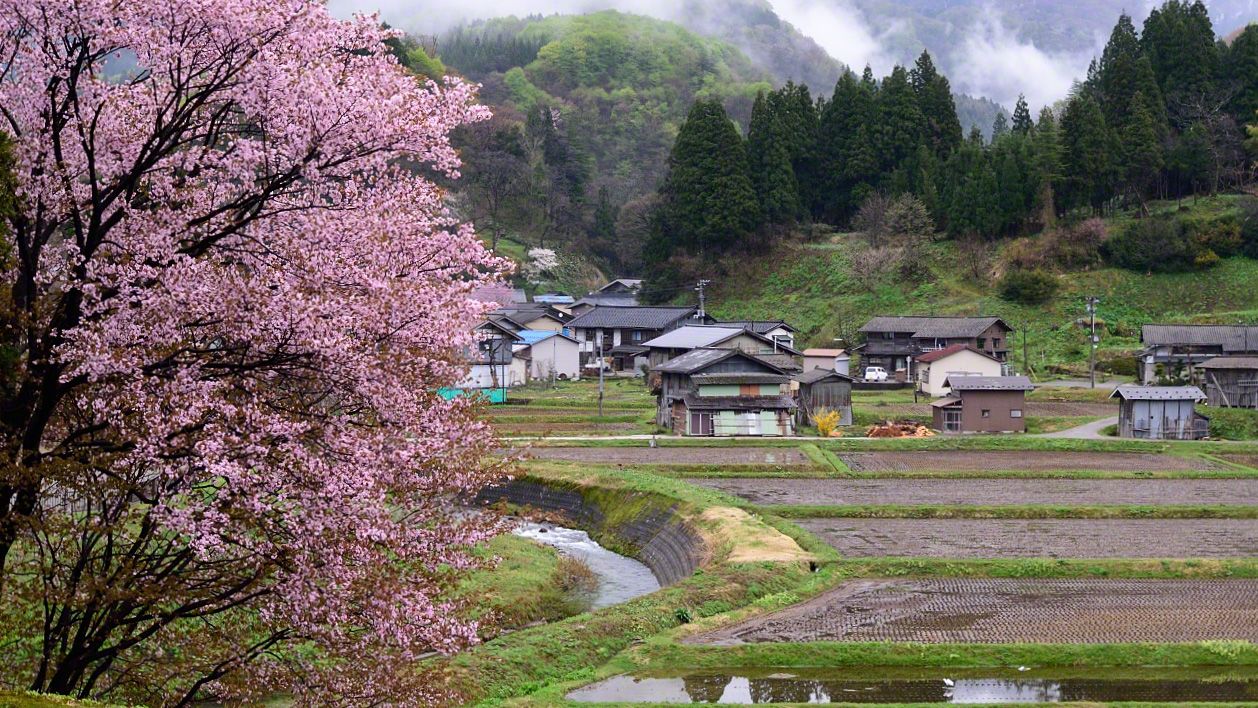 “Satoyama”: Living Together with Nature

A Space Shared by Nature and People

The Japanese word satoyama describes a landscape that lies between the opposites of the natural and human worlds. It is an intermediate zone between, for example, primeval forest and the bustling cityscape, containing both natural and human elements. Paddy fields where rice is grown for people’s meals are a human environment, but when filled with water in spring, they also take on aspects of the natural world, as a place where dragonfly naiads grow into adults. Forests that have provided firewood to use as fuel are homes to countless insects, while meadows with grass that is cut to feed cattle also blossom with colorful, seasonal flowers. The term satoyama can be used to describe a haven for different kinds of life, and their variety of flora and fauna has come to be known as biodiversity in recent years. It is a place where the Japanese of former times would feel a sense of nostalgia and longing. 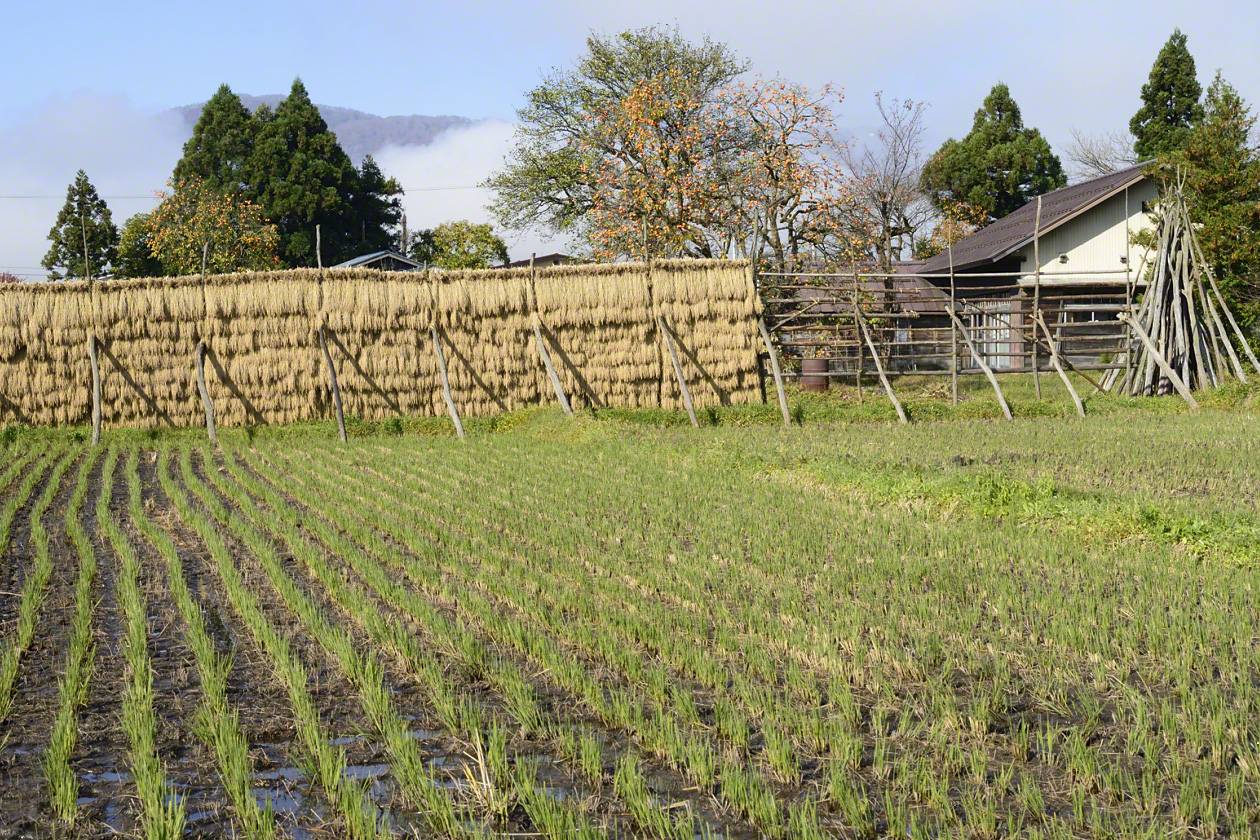 A paddy field in autumn, with harvested rice drying on racks in the background. 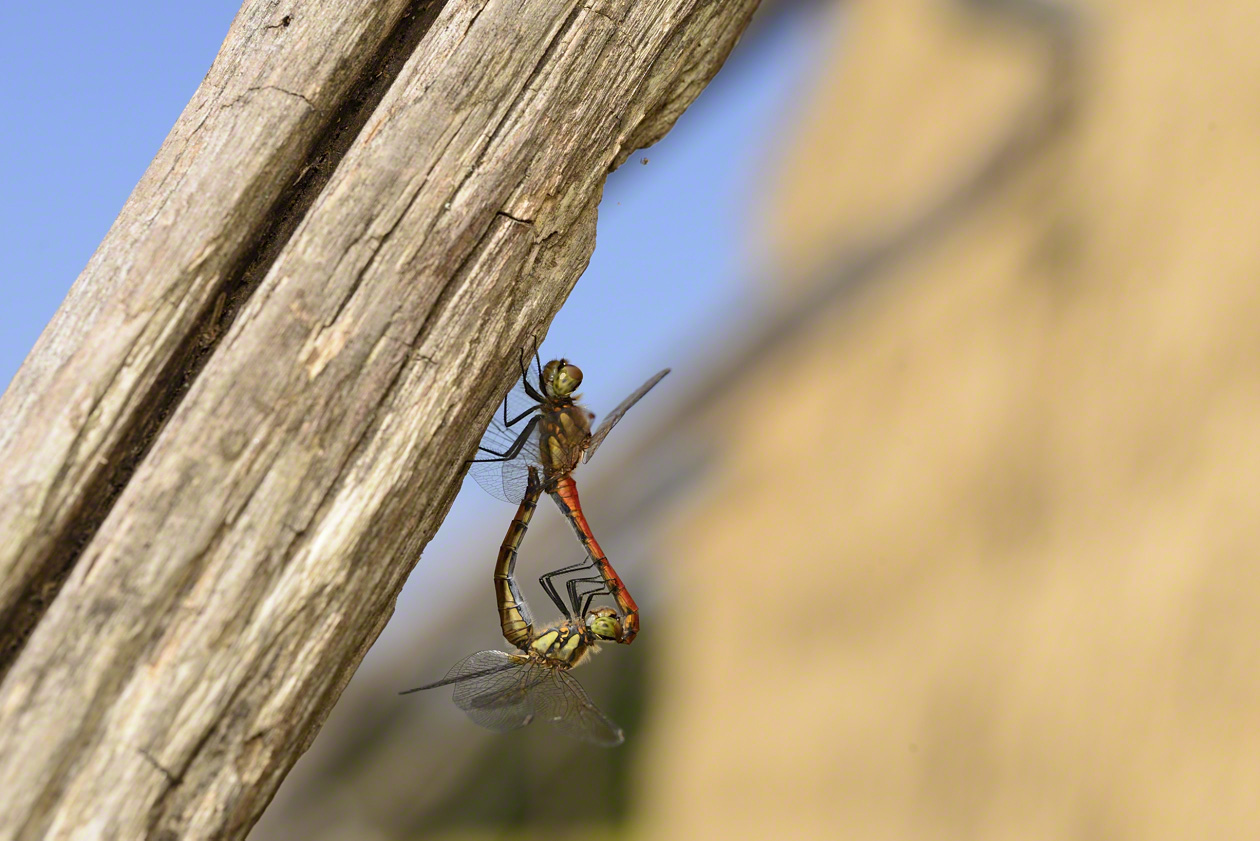 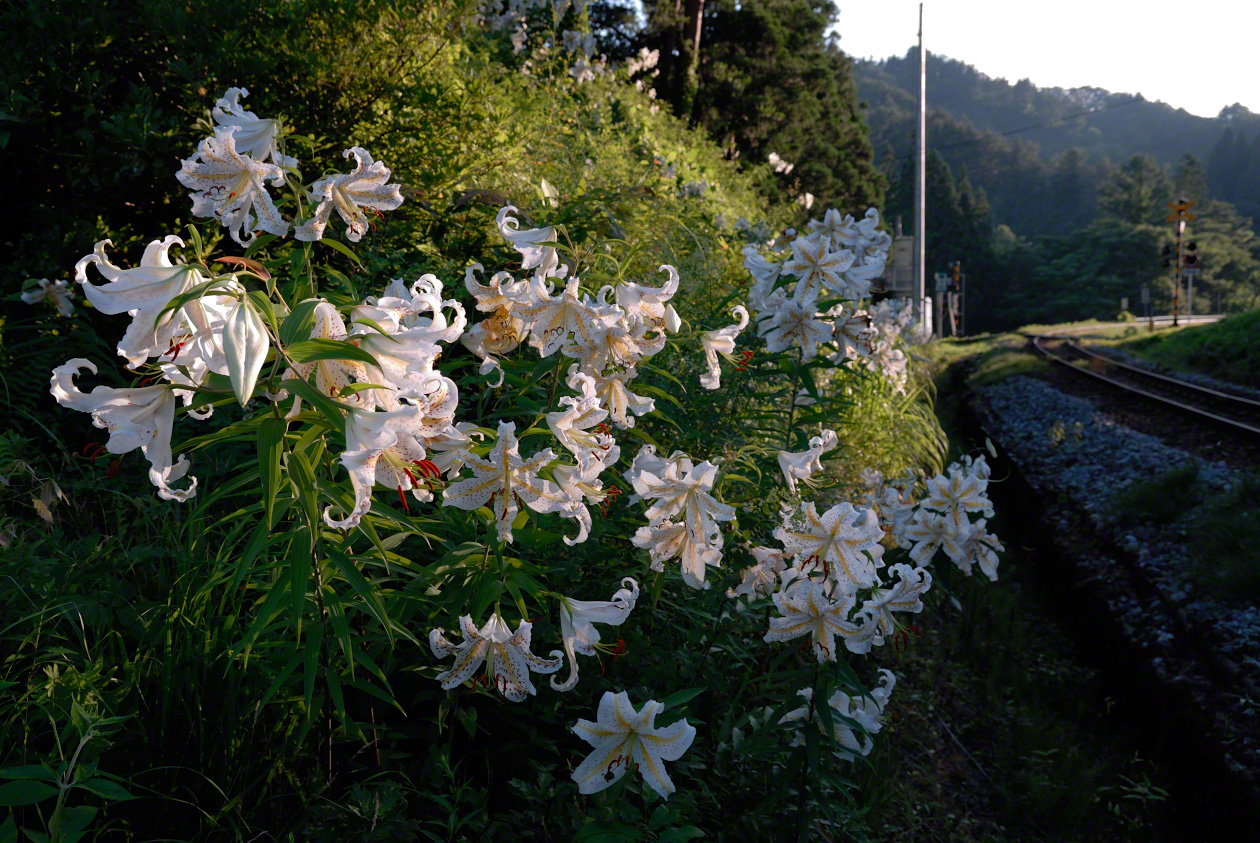 Golden-rayed lilies farmers have left to bloom on a slope beside an old railway track. 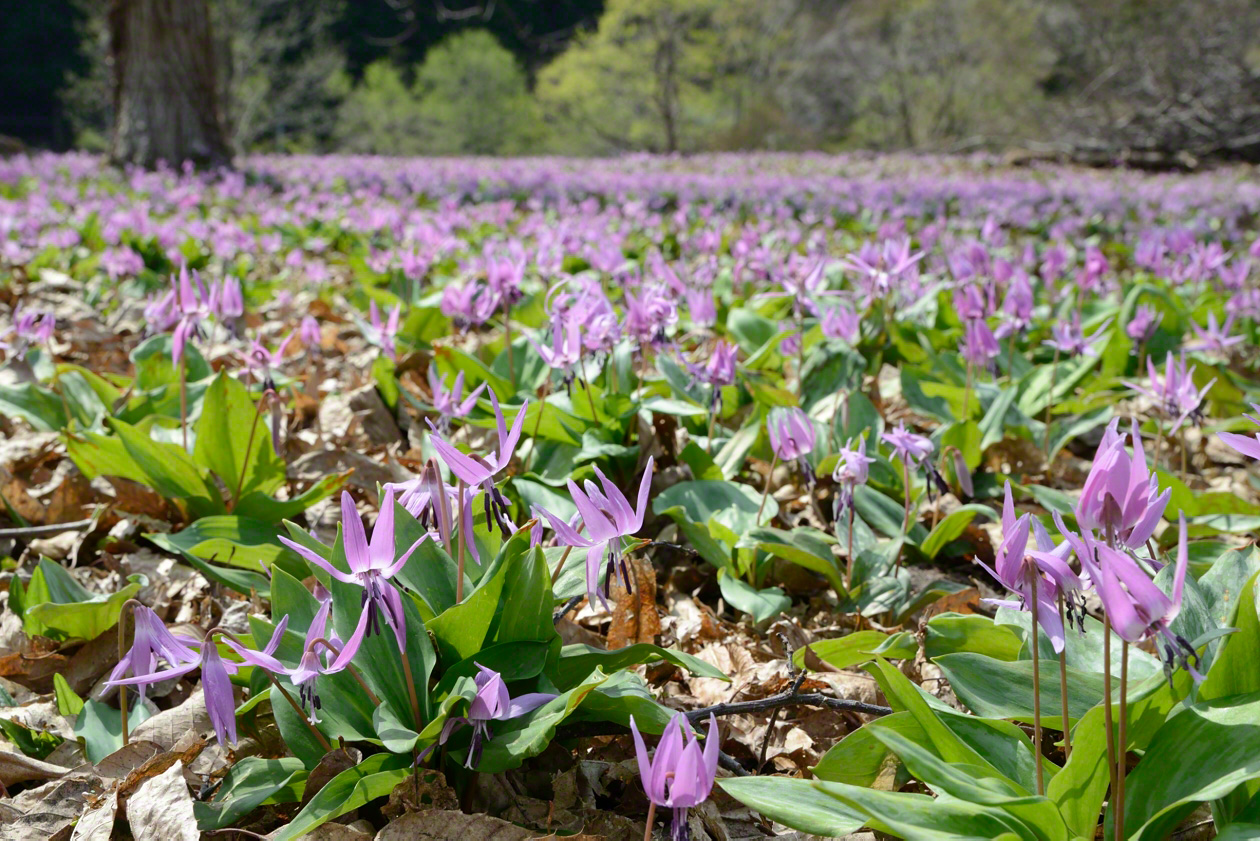 I have been a keen student of plants and insects since childhood, and watch them even today in the satoyama. By doing so, I encounter many beautiful forms of life that pass their days in quiet, their existence unknown by many. 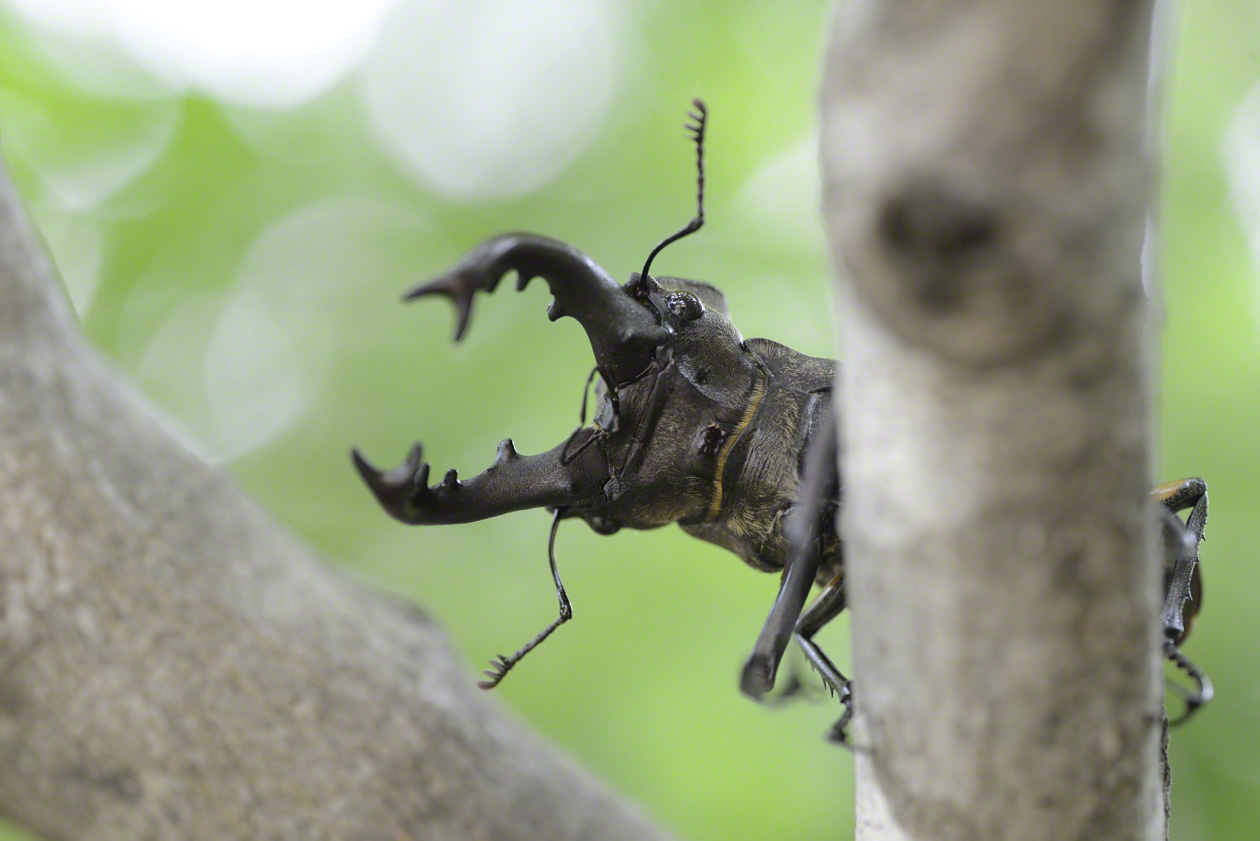 A Miyama stag beetle makes an appearance in a summer copse. 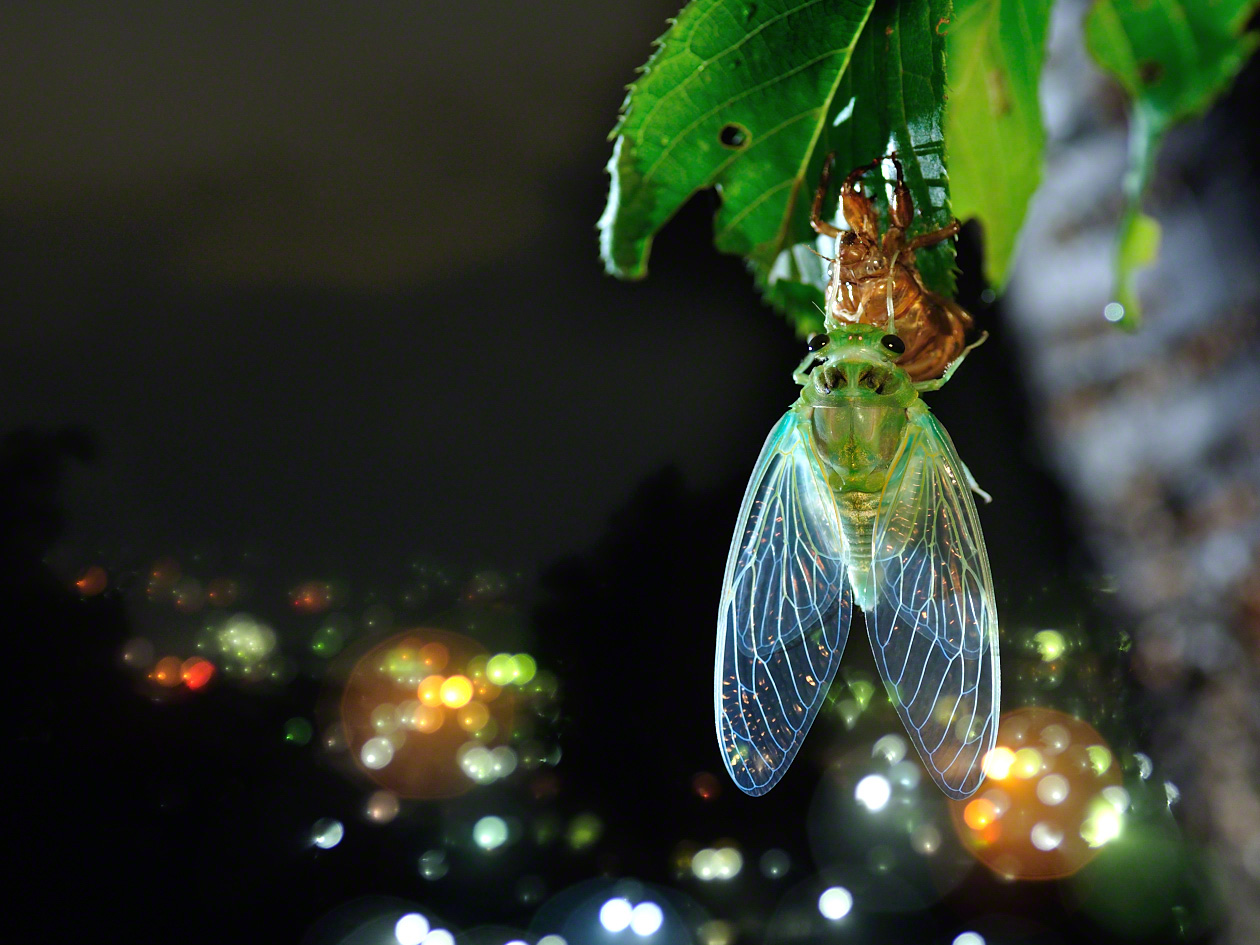 A min-min cicada (Hyalessa maculaticollis) emerging in a suburban forest, one midsummer night. 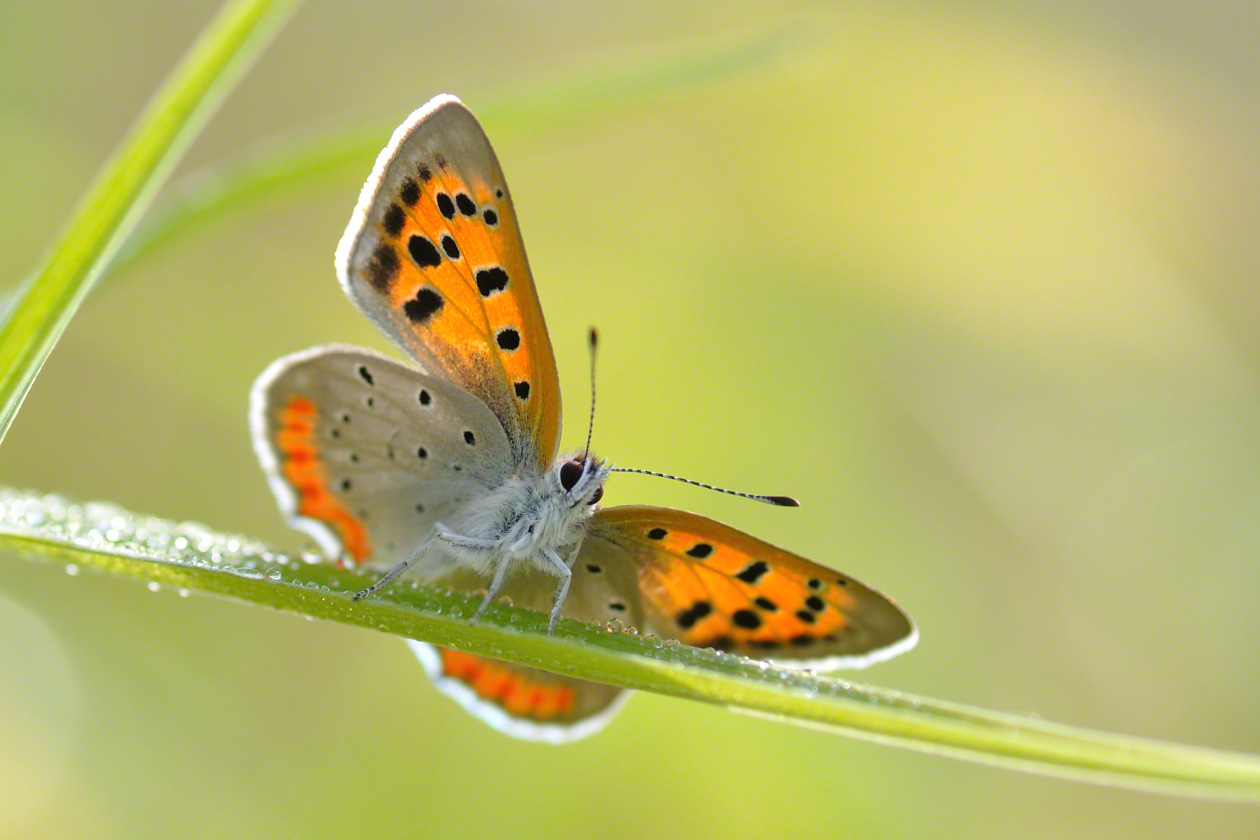 A small copper butterfly brightens up a rice field embankment. 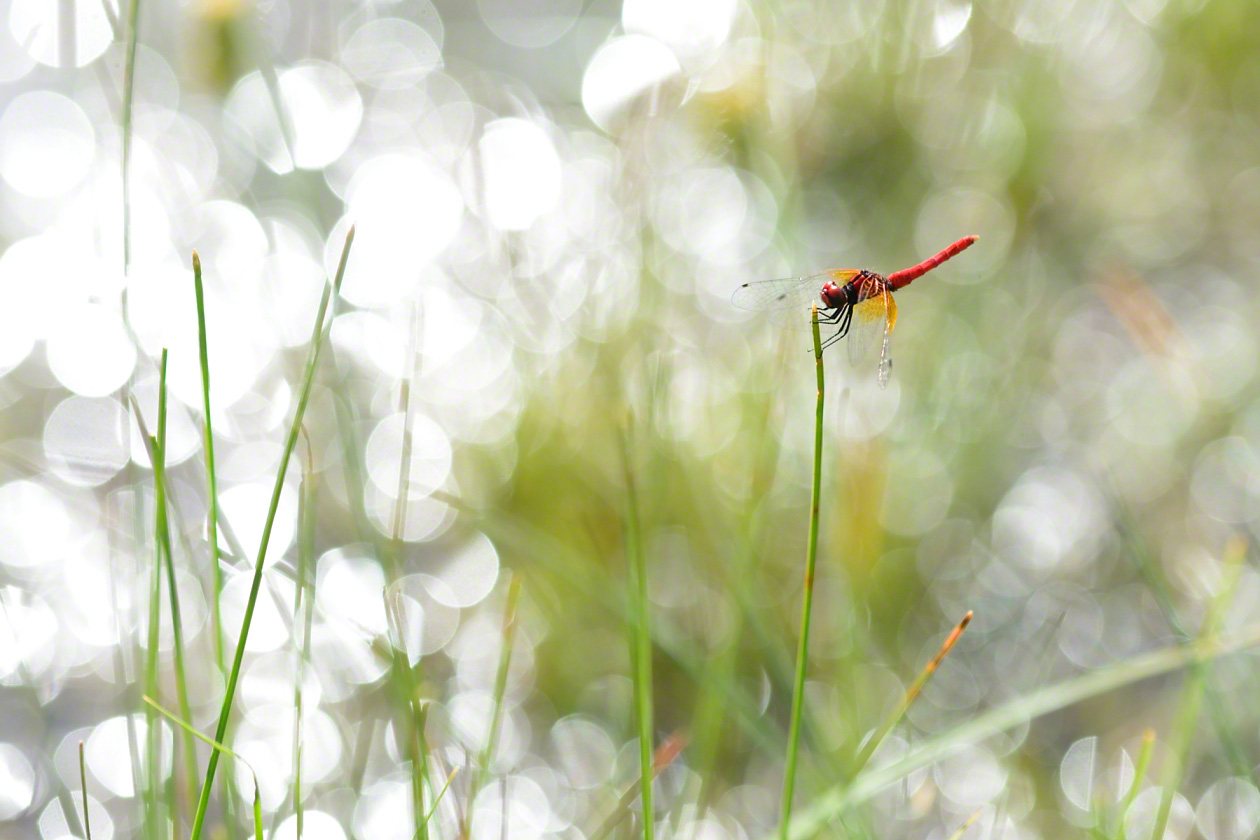 A scarlet dwarf dragonfly makes its home in a satoyama wetland.

To explain the relationship between humans and nature in the satoyama, consider the firefly. The insects are found in various locations across the globe, usually far removed from people in deciduous, tropical rain, and mangrove forests. However, Japan’s Genji fireflies (Luciola cruciata) live in paddy field irrigation channels. While their numbers are reduced, it was once common to see fireflies flitting around the houses once night had fallen in rural settlements. Before the advent of heavy machinery, farmers used hoes to dig the channels for diverting water from streams to fields, which although artificial were extremely close to nature. Many freshwater snails (Semisulcospira libertina) lived in these channels, providing food for the fireflies, and so making them a suitable habitat. The concrete channels used in recent years, however, are entirely artificial, and offer no home for fireflies. 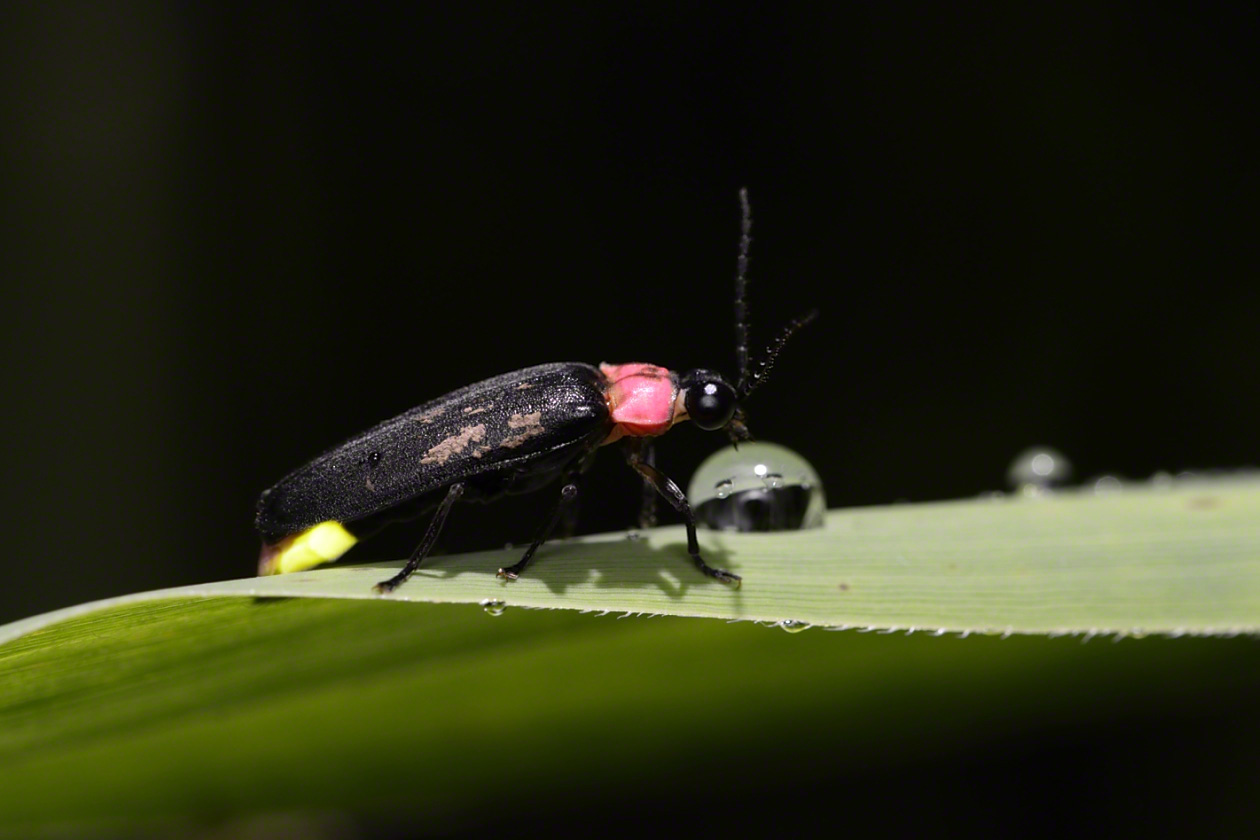 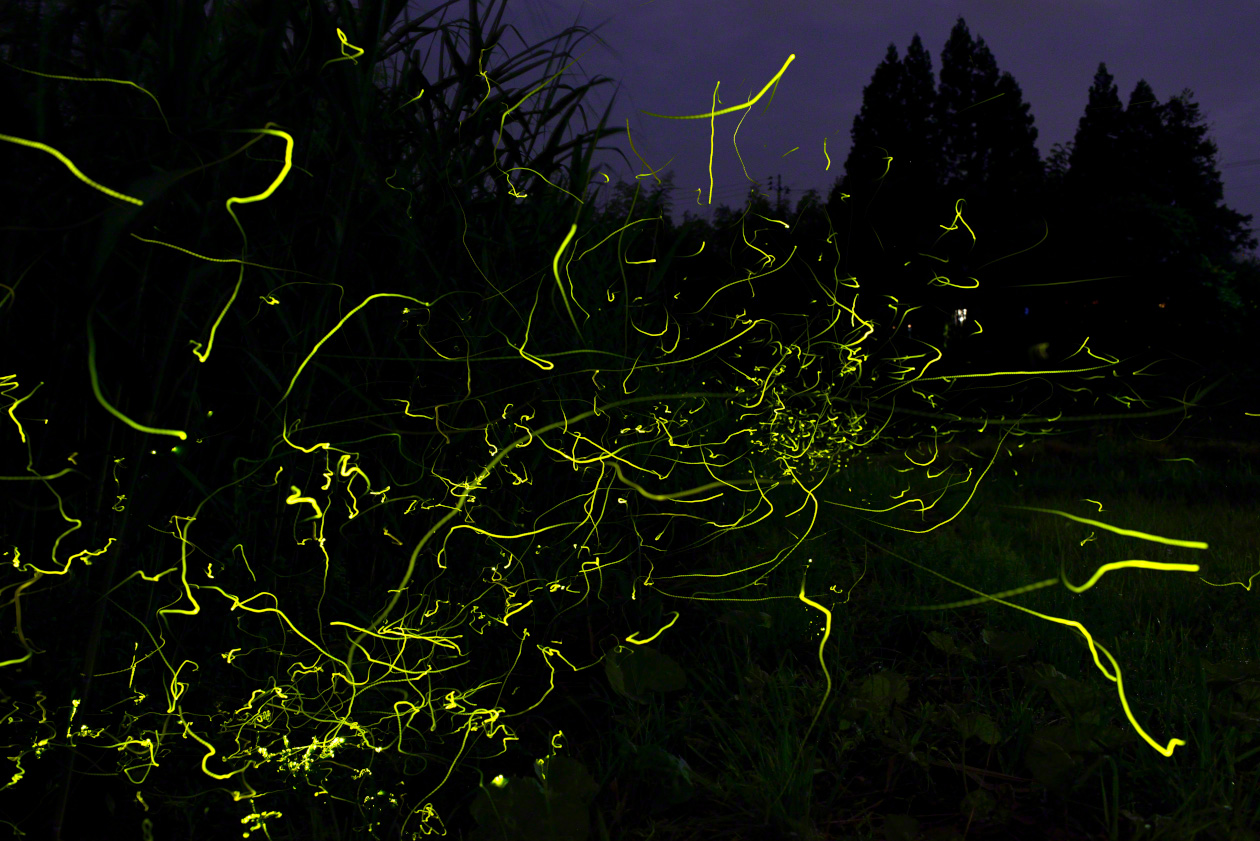 Many Genji fireflies dart through the air by a paddy field one summer night.

The biodiversity of the satoyama came about through the residents’ use the land for a variety of different purposes. These were not decided willy-nilly, but through planning for a self-sufficient lifestyle by each community. There were understandings to ensure natural resources were used appropriately and not exhausted, as when cutting grass or collecting wood for fuel. When tasks were too great for individuals, such as burning the dried grass of meadows at the beginning of spring, communities performed them together. The term “sustainability” has become popular in discussions of energy issues and the environment, but in the self-sufficient satoyama it was an essential part of long-term planning. 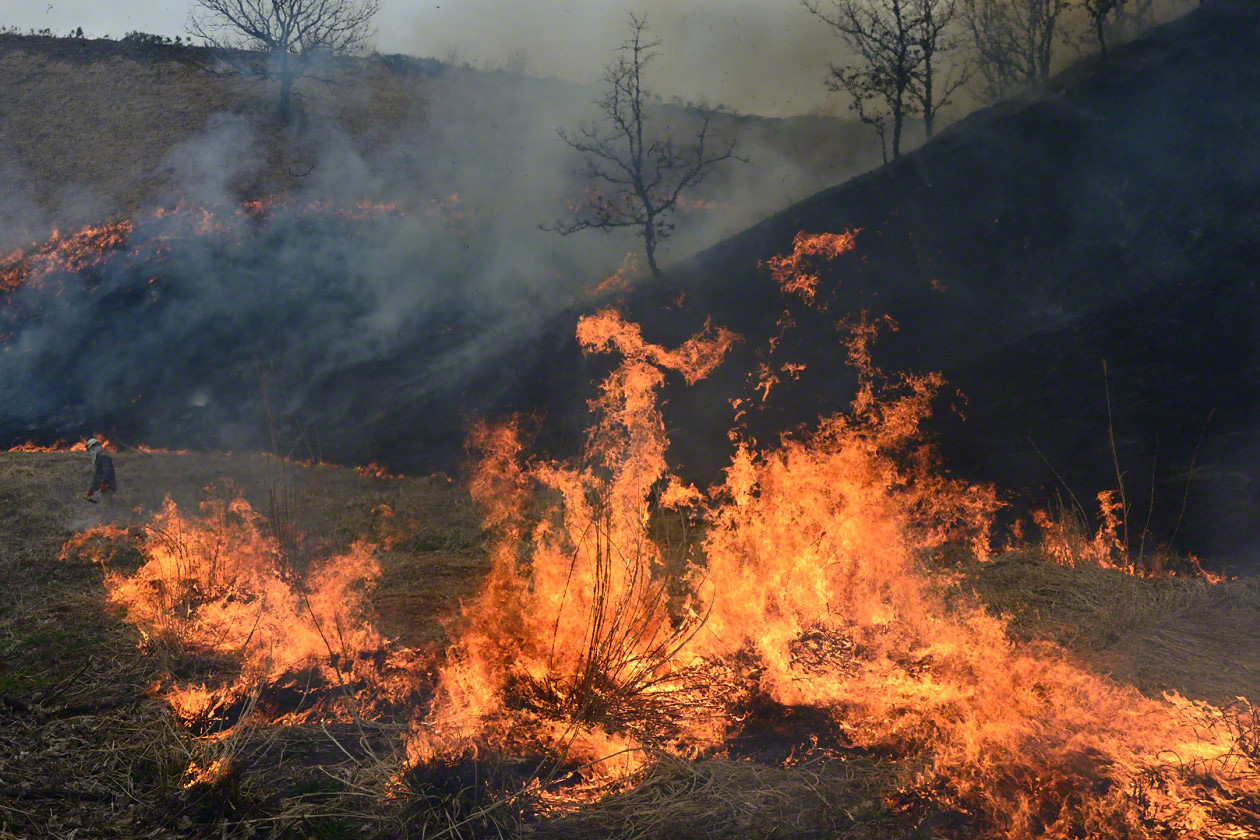 Controlled burning of dried grass in early spring is an important task to maintain healthy fields.

Japan’s satoyama have changed considerably over the past 50 years. Rapid economic growth brought roads to rural areas, and vehicles could travel all over the country. With the road network came improved distribution, so people could buy food in stores, removing the need to be locally self-sufficient. As gas stoves became standard, there was no requirement to gather firewood in the forest and make charcoal. The adoption of mechanical cultivators and tractors greatly reduced the time needed to plow a field, and meant it was not necessary to raise cattle. This wave of transformation came about through the switch to use of fossil fuels like oil and gas. 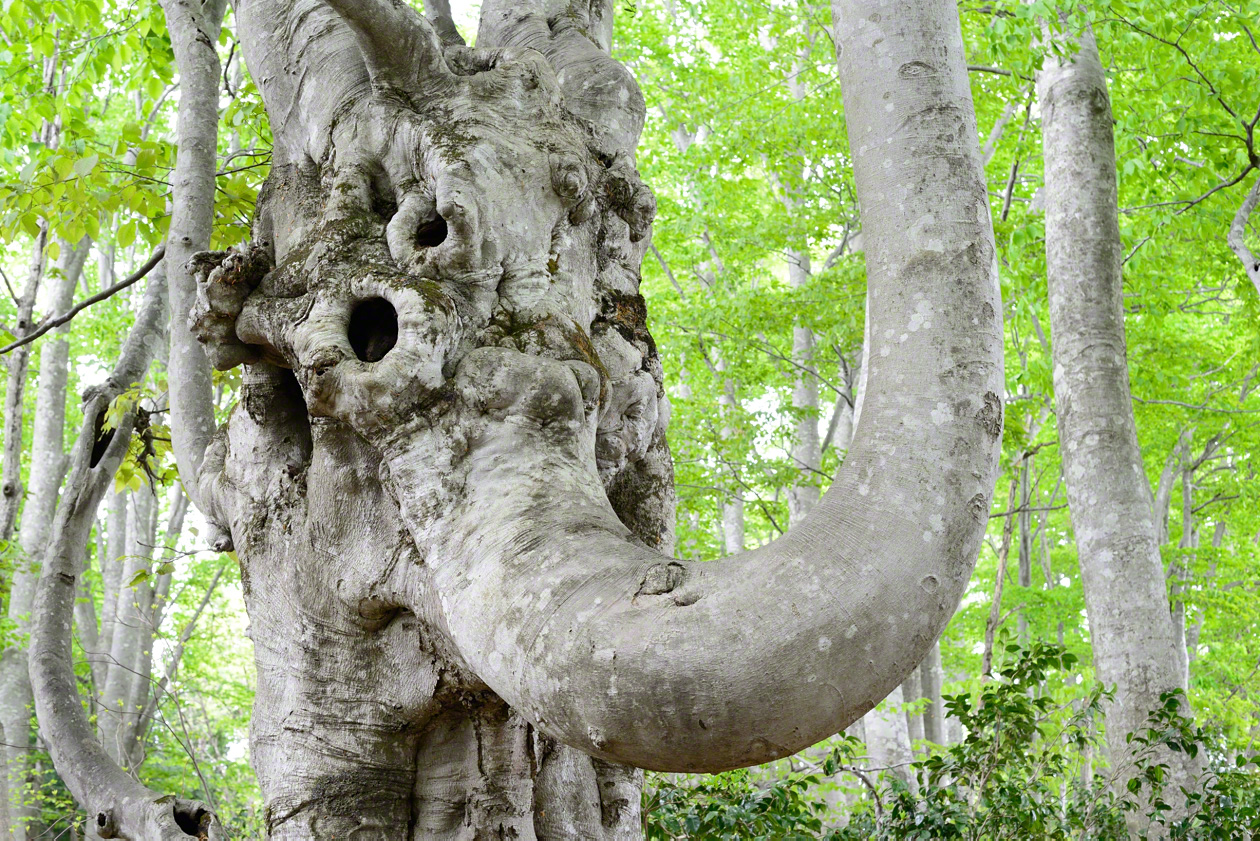 An old beech (buna) tree shows the traces of repeated cutting of branches to make charcoal.

The loss of self-sufficient lifestyles in villages meant the satoyama could not maintain their biodiversity. Many seasonal wildflowers can no longer be seen. The ridges between rice fields are now machine-made, so it is easier to get agricultural equipment in, while pastures are planted with grasses of European origin. The golden valerians and balloon flowers (kikyō) have disappeared from summer meadows. Melitaea protomedia butterflies that feed on golden valerians are now found in just one habitat in Japan, and face the possibility of dying out in the country. 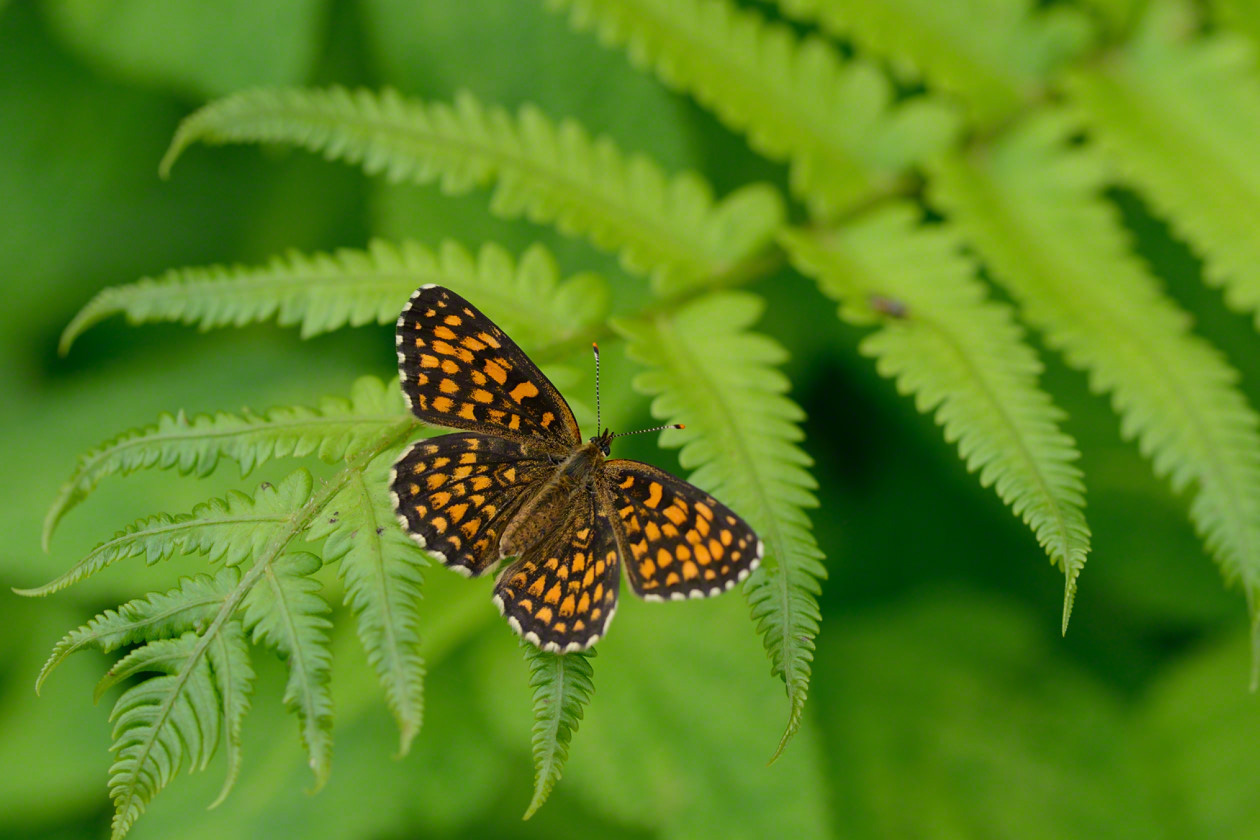 As well as disappearing from satoyama, wildflowers are fading from people’s hearts. The generations with a closeness to satoyama felt an affinity for the flowers through the seasons and praised nature through poetry. In the Man’yōshū poetry collection of more than a millennium ago, many satoyama plants played leading roles, but they rarely appear in recent literary works. In the Obon custom of high summer, in which Japanese people welcome ancestral ghosts to their homes and make them offerings, golden valerians and balloon flowers were placed on the butsudan (home shrine). Children had the job of collecting these flowers, but now people buy their blossoms at florists. 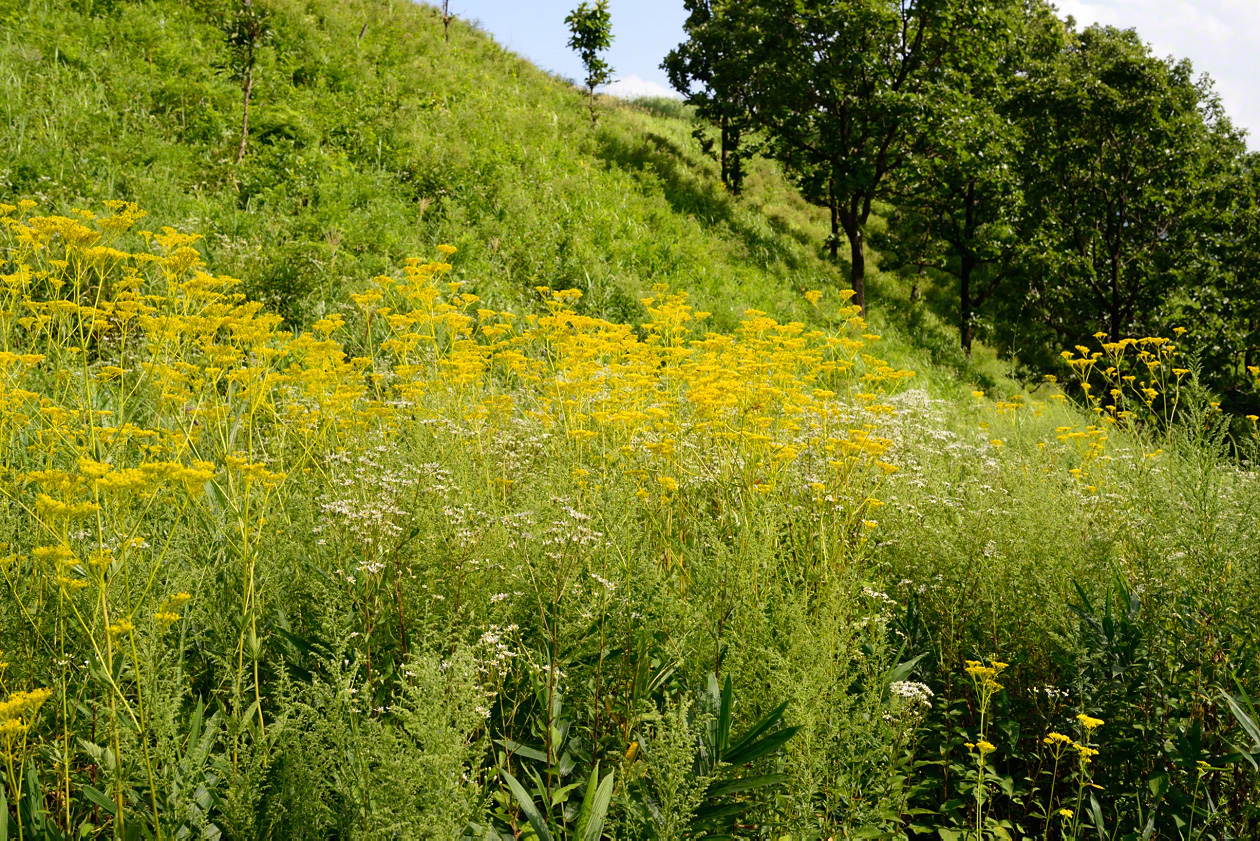 Golden valerians in a summer meadow. 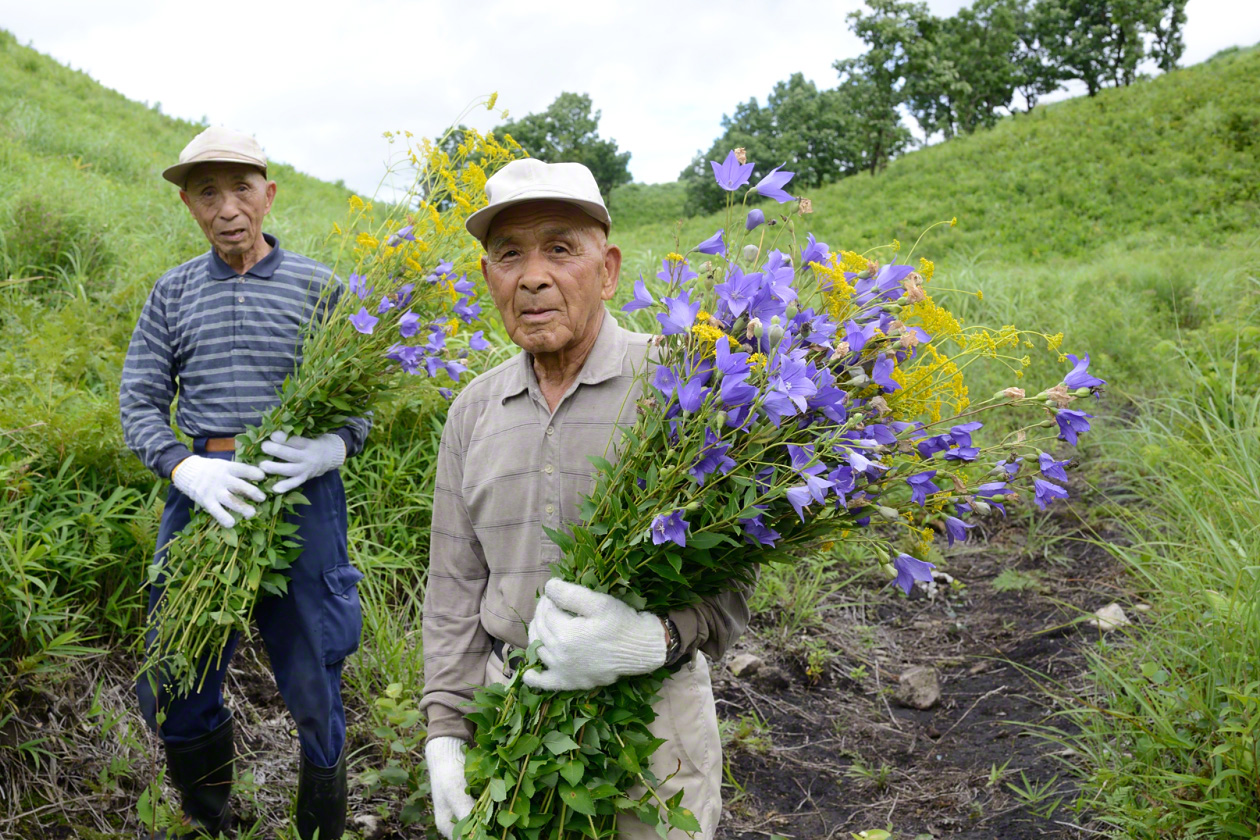 Due to the decline in usage of the satoyama, insects and plants are increasingly endangered. In a clear trend over the past half-century, the widespread use of fossil fuels has dramatically changed lifestyles, and similar impacts have been seen in meadows, paddy fields, and forests. Concern has grown over climate change and other global environmental issues, but even the policies to counter these challenges—such as chopping down forests—which are valuable, renewable natural resources, to make space for wind or solar power installations—are lacking in long-term vision,. 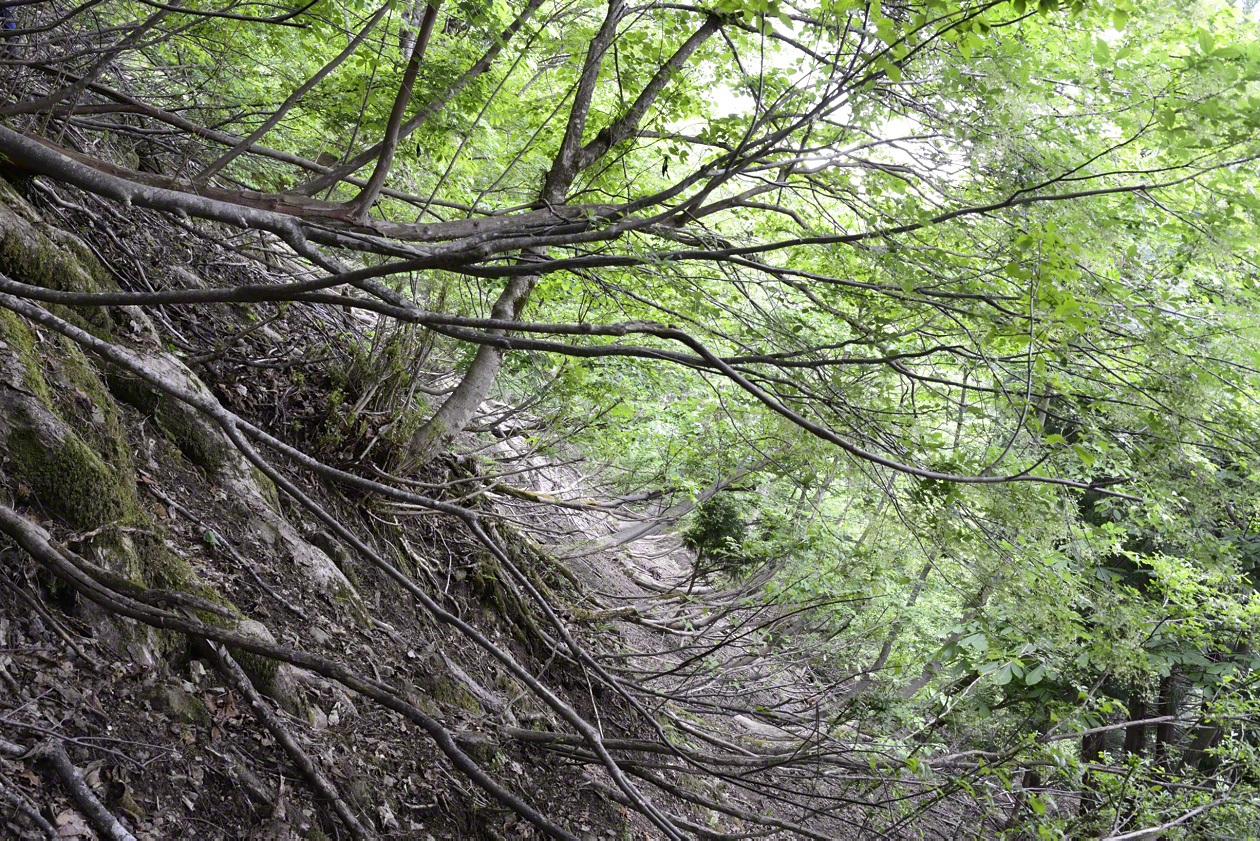 The undergrowth on this slope, no longer in regular use by local residents, has been eaten away by deer. 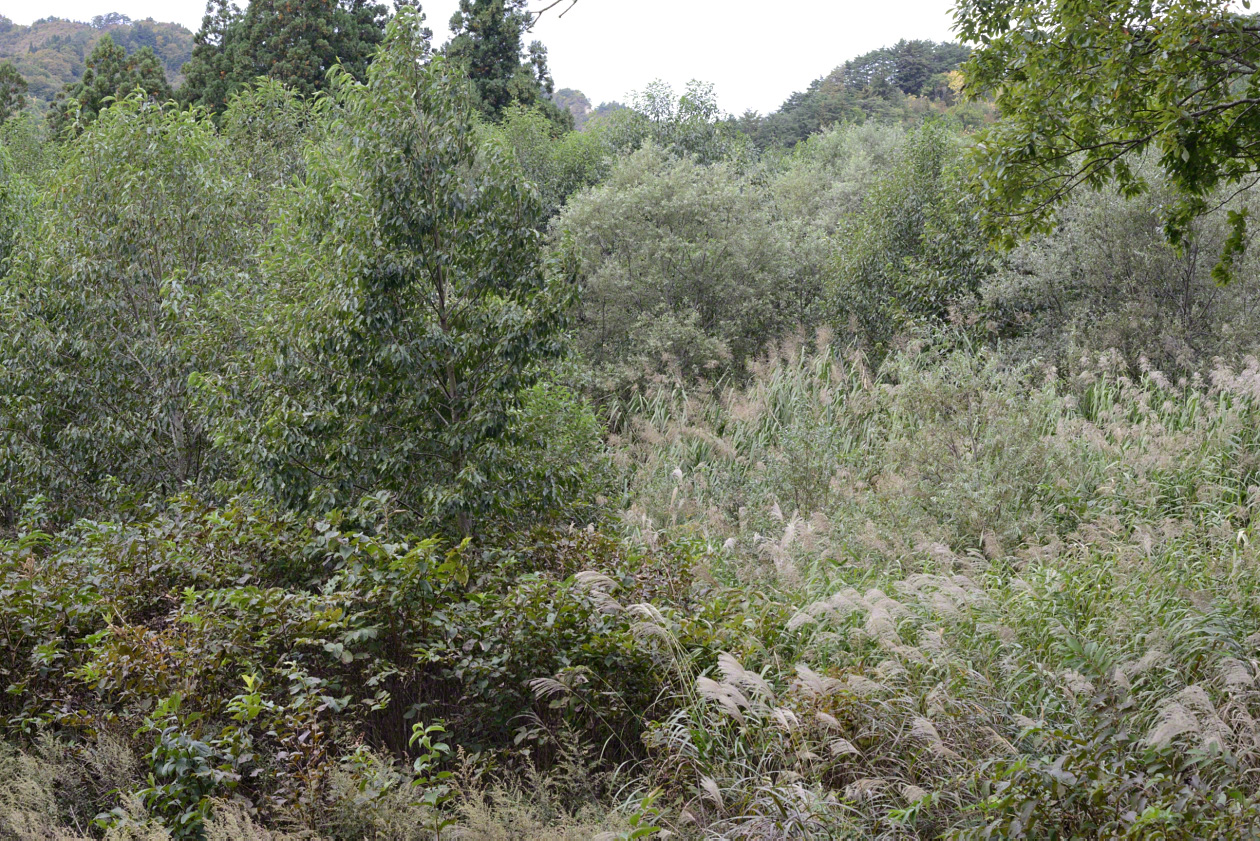 Just 30 years ago there were rice fields here, with a rural settlement nearby, but now the area is abandoned. 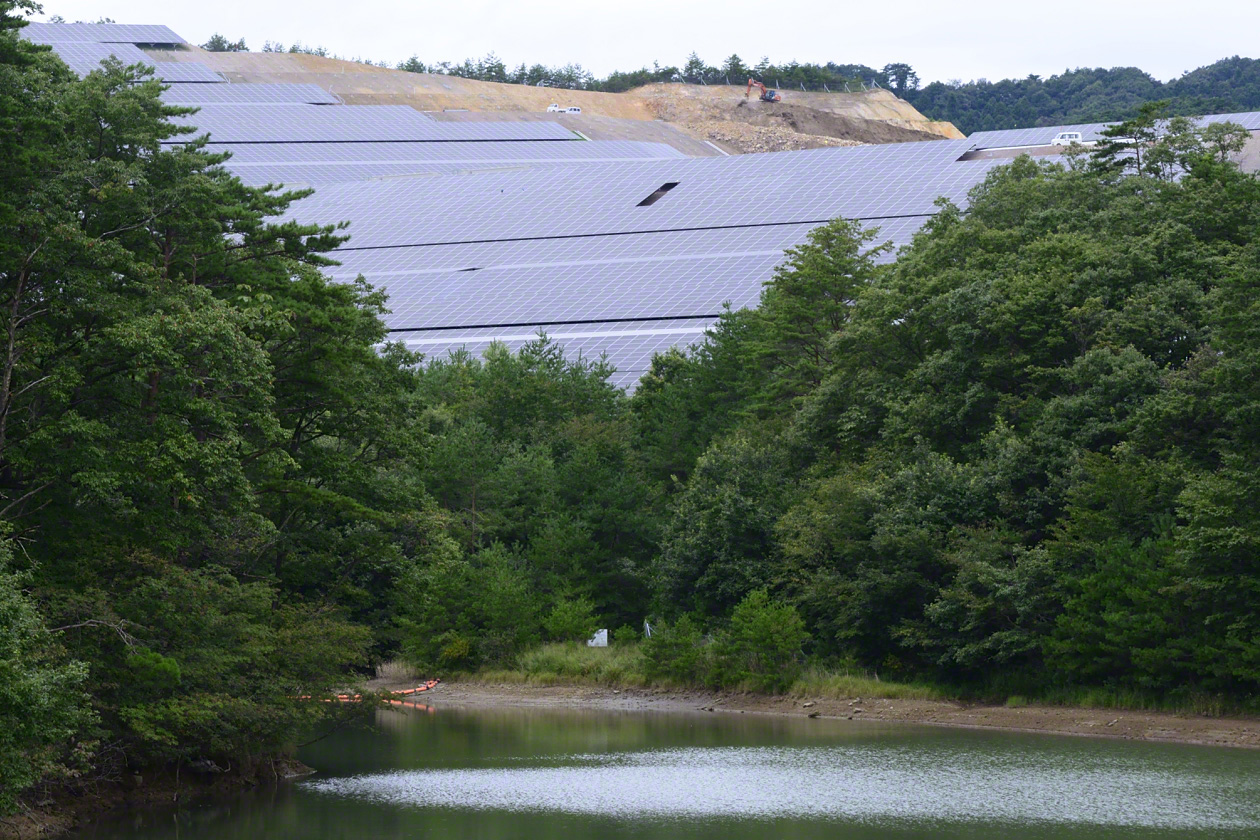 A solar power generation facility cuts through a satoyama landscape.

Japan’s satoyama are already in terminal decline. This is clear from surveys of their animal and plant life. Still, they retain a positive, pastoral image. For example, the Satoyama Initiative was proposed at the Convention on Biological Diversity held in Nagoya in 2010 as a means to promote sustainable management and use of natural resources, and satoyama were held up as a resource for Japan to be proud of. There continues to be much romanticizing talk, but placing one’s hopes only in such words may mean turning one’s back on issues that need to be tackled.

Now that people’s lives have changed, there is no way to turn back the clock 50 years for nature as found in satoyama. However, it is possible to revive the techniques that were used to manage them and their plants and animals, and the systems that shaped them, before they die out.

When it comes to biodiversity, conservation efforts for endangered satoyama species are ongoing in various parts of the country, and I have taken part in several myself. The passing of time brings development of efficient ways to protect the environment. Yet I still want to focus on learning from the sustainable management techniques once used in the satoyama, and would advocate bringing back each of the various systems to implement them in combination: for example, controlled burning of meadows in early spring, cutting and taking away of grass in summer, and further cutting in autumn. People now in their seventies learned this traditional wisdom from their forebears, but after their successors, who rely on more modern methods, take over, it will be difficult to pass it on. 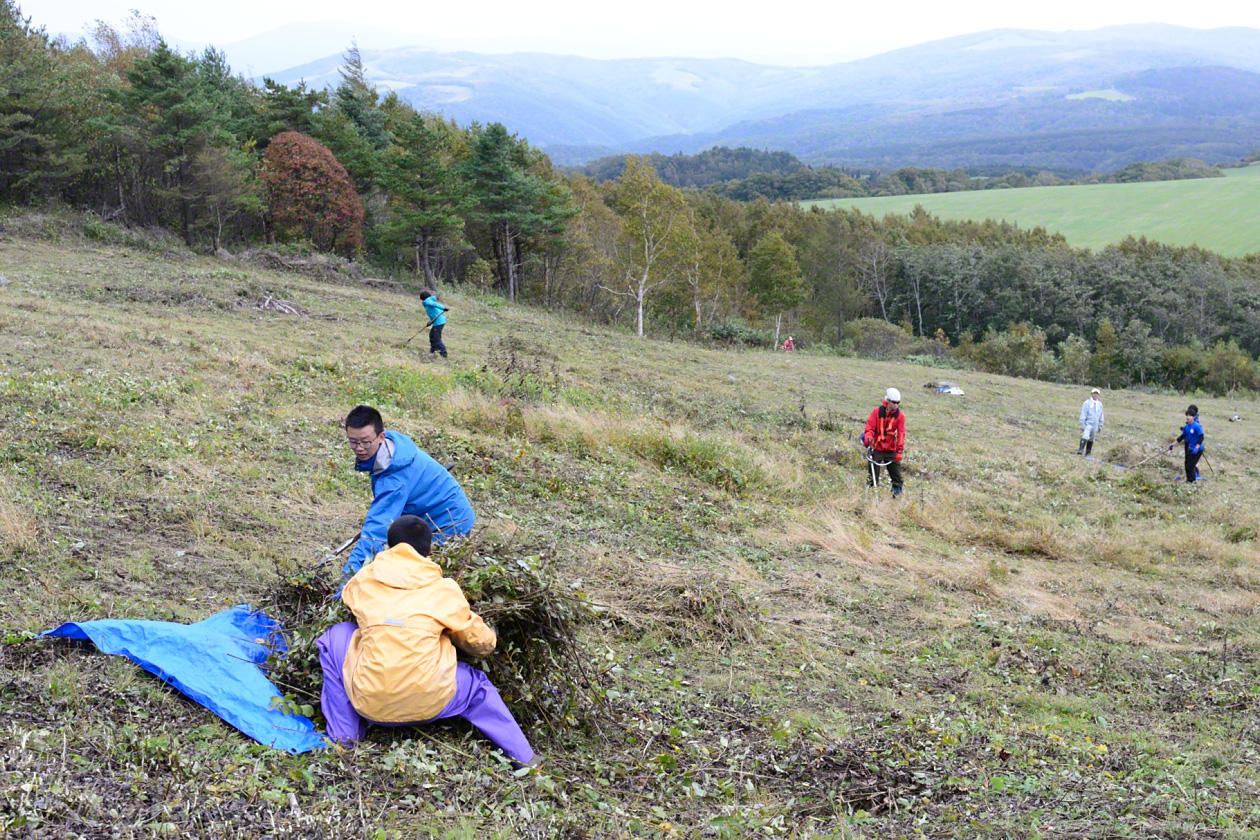 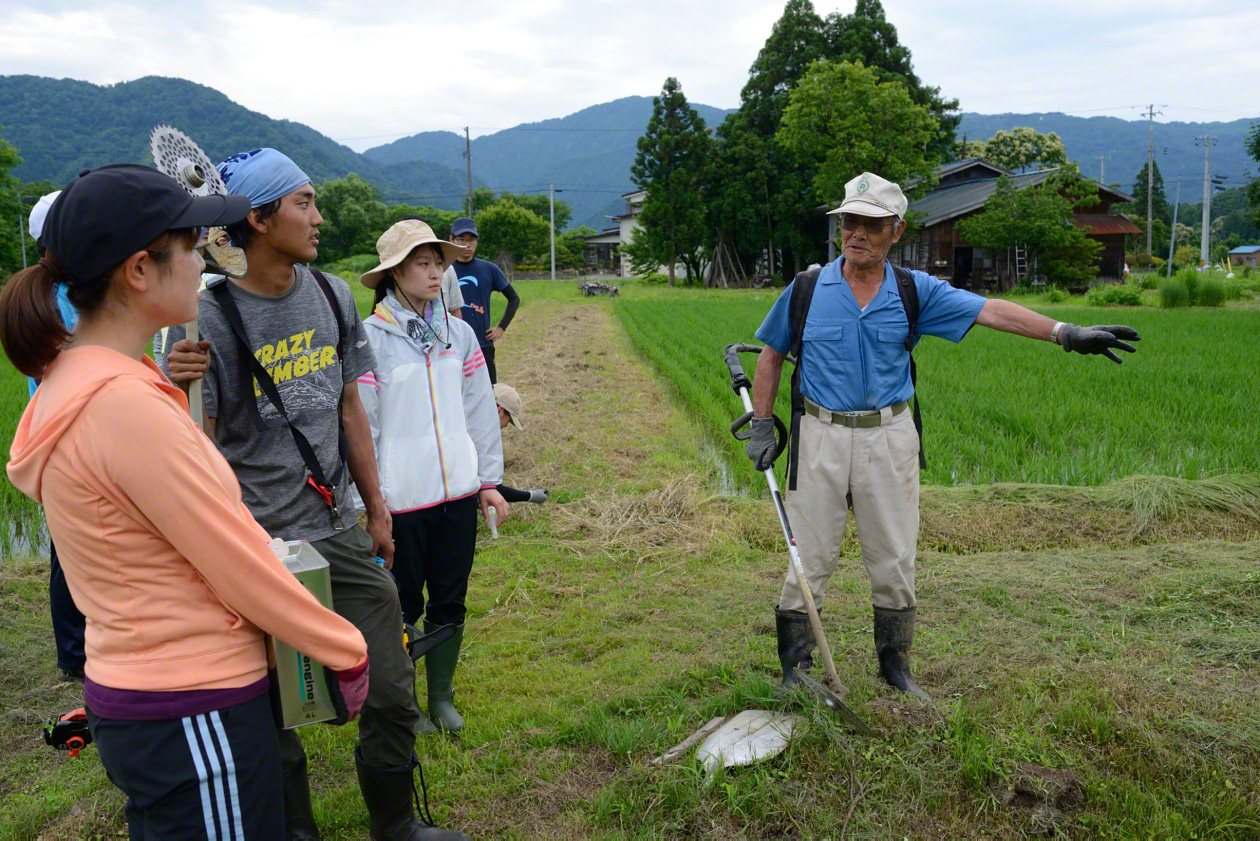 A farmer teaches young people how to manage rice paddies.

This is why I want to tell the young generation that while knowledge can be passed on to some extent through books and other written materials, techniques must be taught directly, in person. It is still possible to preserve the systems for maintaining satoyama that are scattered through Japan by handing down traditional wisdom. A vision for how to deal with environmental problems on a global scale comes into view through rethinking the relationship between humanity and nature, rather than simply through developing new technologies. 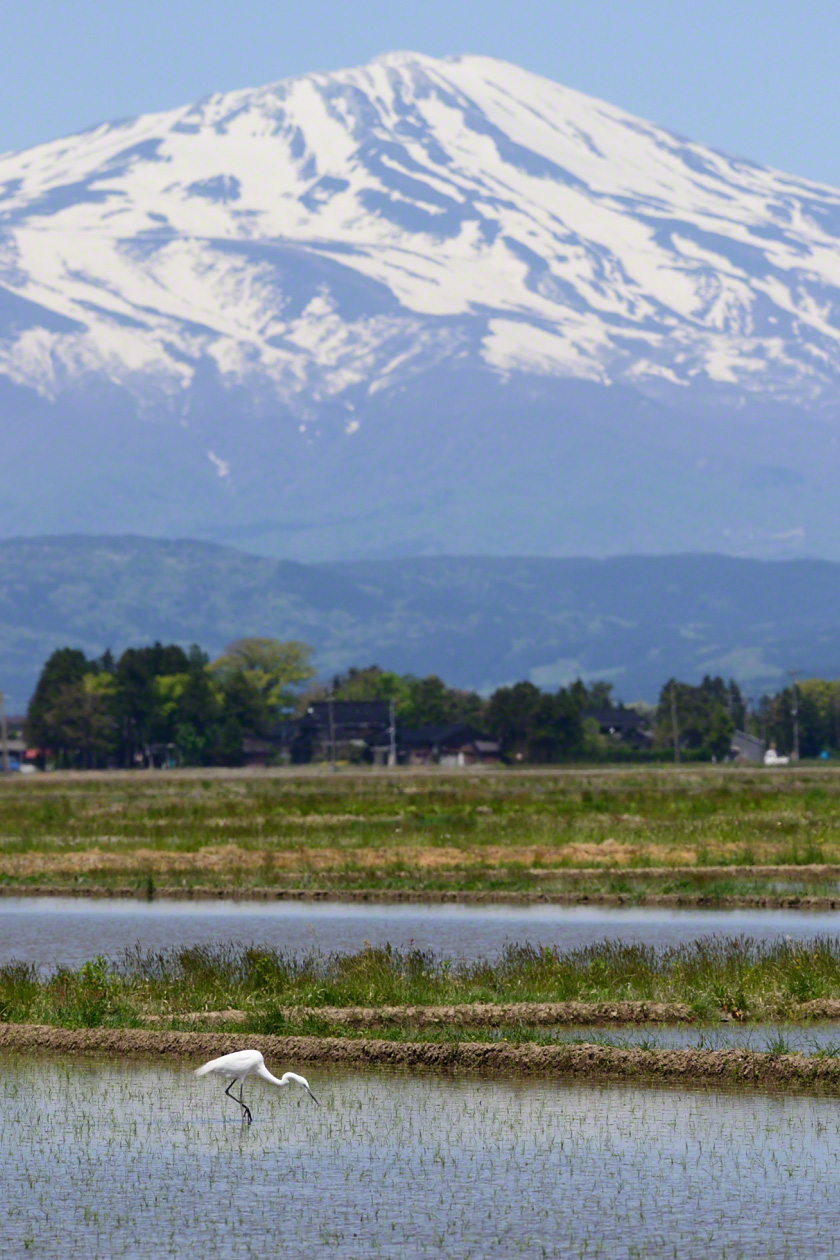 A great egret searches for food in an irrigated rice paddy where planting has begun.