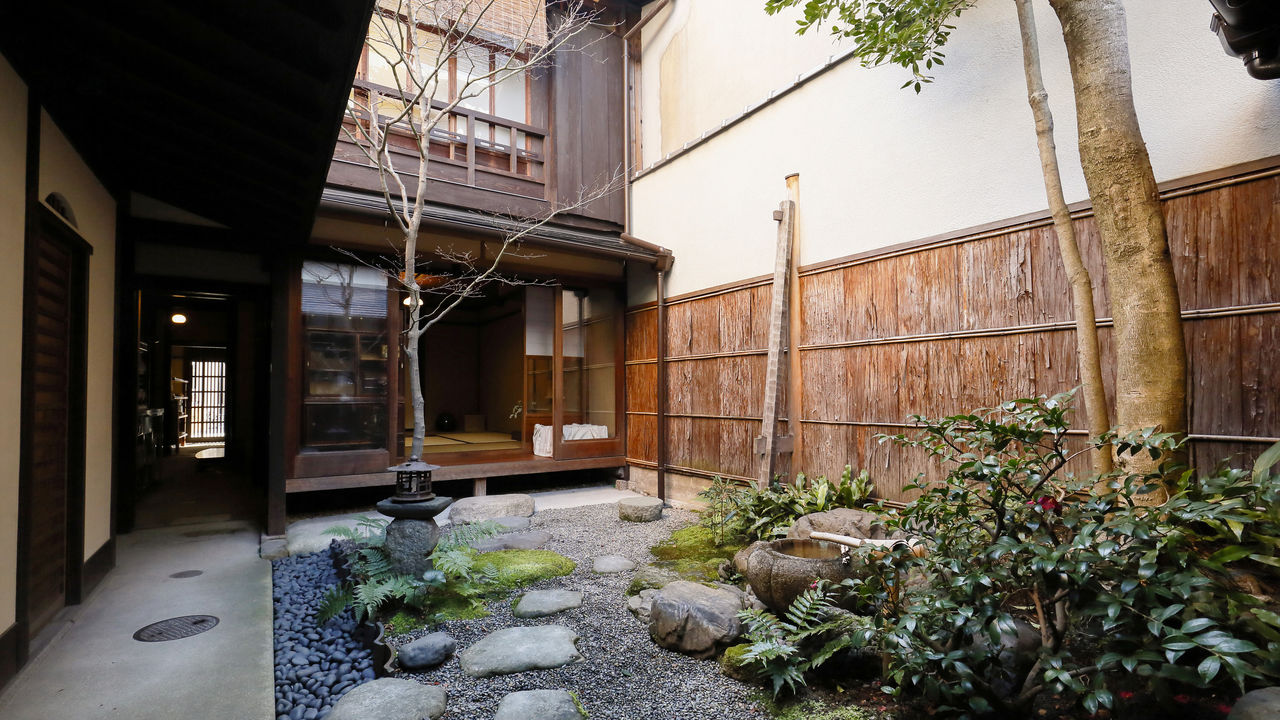 Jun 4, 2018
Kyoto’s machiya not only exude aesthetic refinement but are also very comfortable to live in, being functionally designed to adjust temperature and humidity and to withstand earthquakes. These traditional wooden townhouses encapsulate the many innovations that homebuilders in the ancient capital developed over the past millennium.

“Back when Kyoto became the nation’s capital in the eighth century, machiya referred to small huts in the market where goods were sold,” explains Matsui Kaoru, who has helped restore and find new users for Kyoto’s machiya both as an architect and as a business group leader. “Living quarters were added later, and this eventually evolved into the machiya we see today.”

As the city and lifestyles developed over the centuries, so did the townhouses where people lived. Many innovations were introduced over the past millennium, and uniform standards were developed. Remaining in the city today are some 40,100 traditional-style wooden residences built before 1950.(*1) 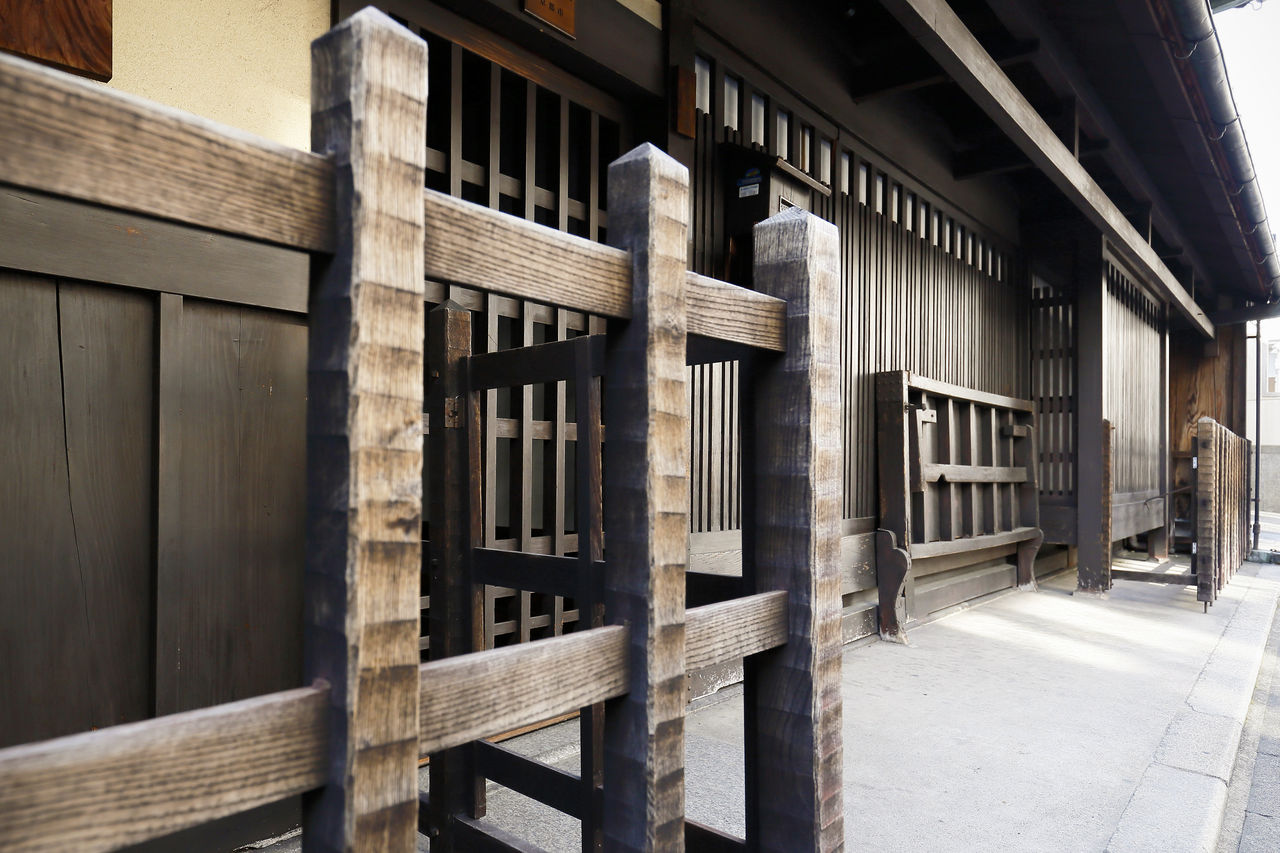 The battari shōgi (folding table), right, was lowered to display merchandise, as many machiya served as both shops and residences.

The style of machiya we see in Kyoto today that became established around the middle of the Edo period (1603–1868) were built with completely natural materials. Sections of these homes were renovated in accordance with the natural growth cycle of the building materials.

“Straw, for example, is produced every year, so it was replaced on an annual basis,” Matsui says. “Mitsumata and kōzo—whose bark fibers are utilized to make washi paper—and bamboo require about three years to grow enough for use in buildings, so people upgraded their paper and bamboo furnishings every few years. Trees take several decades to mature, meanwhile, so steps were taken to prolong lumber’s life, either through rearrangement or reinforcements.”

Because building materials were natural, anything that was replaced could be burned as fuel in the kitchen stove, and the ash could be used by nearby farmers as fertilizer. Kyoto’s machiya thus enabled an ecologically sustainable lifestyle. 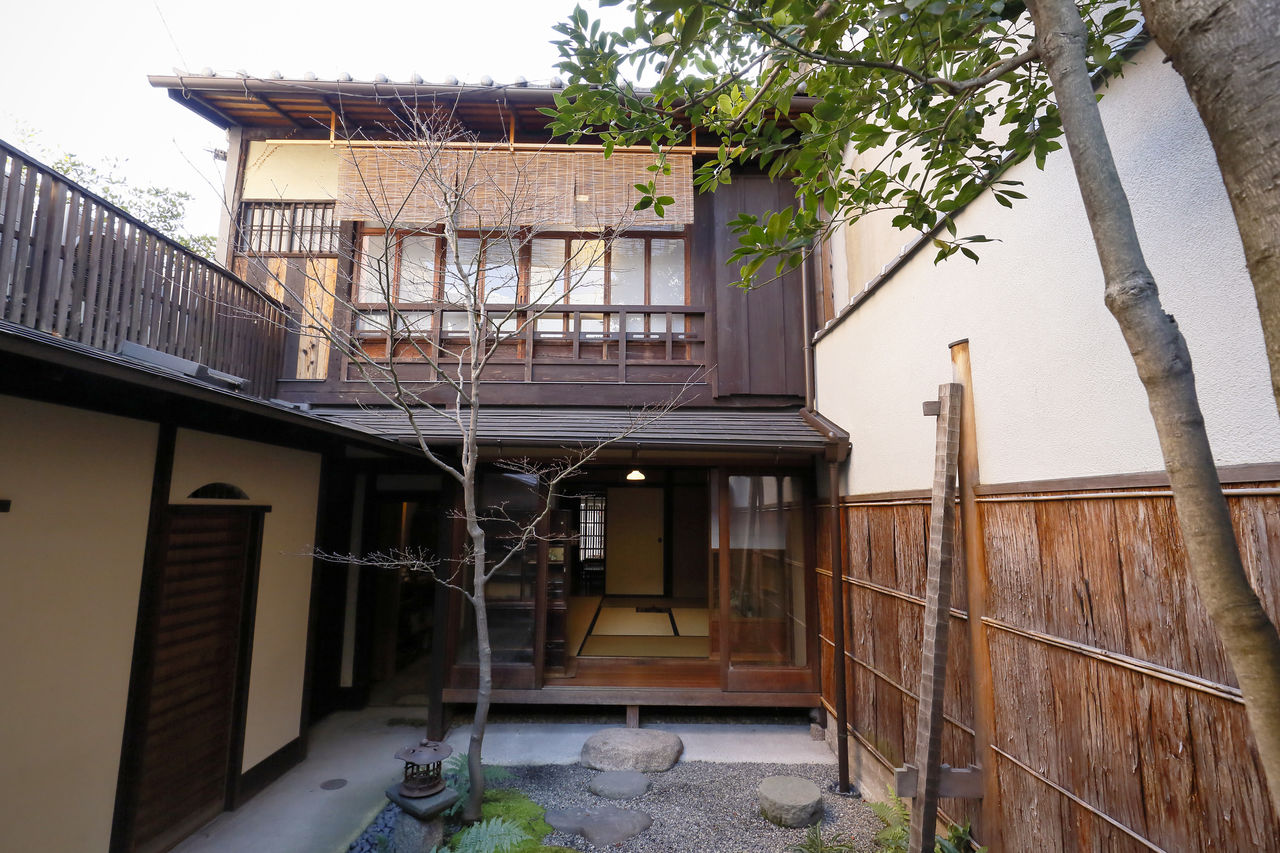 The courtyard of a traditional Kyoto townhouse.

Another ecological feature of Kyoto’s machiya is their ability to adjust humidity. “Humidity of around 50 to 60 percent can be maintained year round,” says Matsui. “Even when it’s really humid outside, say around 80 percent, things are slightly more tolerable indoors. This is thanks to the shinkabe-zukuri method of construction, where the pillars remain exposed on the sides of a plastered wall. This offers many advantages over other methods and is particularly good for adjusting humidity.”

During the rainy season, for instance, the paper covering of shōji sliding doors becomes damp and heavy, and each exposed pillar is said to absorb about half a liter of moisture. The house as a whole breathes, distilling the outer air to bring comfort to occupants inside. 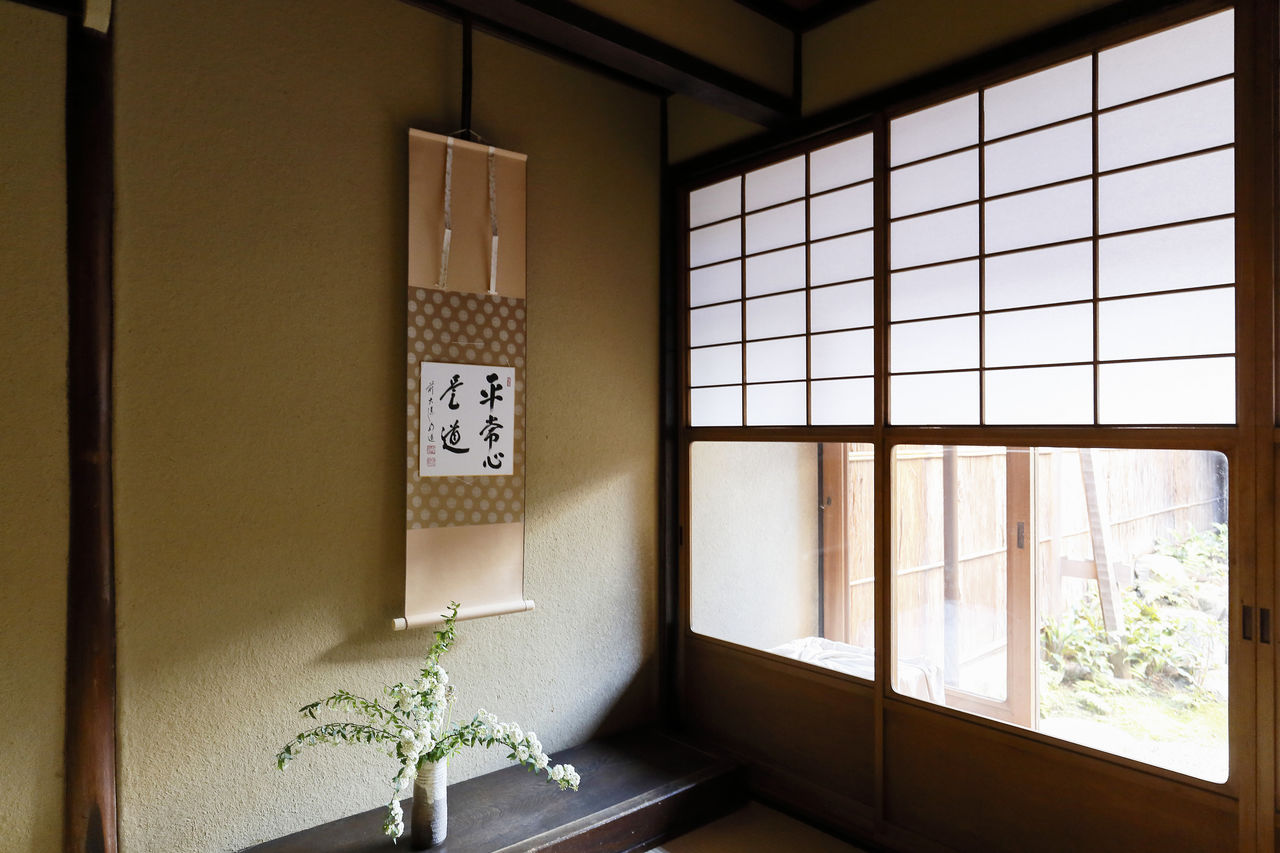 The shinkabe-zukuri method of wall construction is an ingenious way of controlling humidity.

There are also many touches to let in the right amount of sunlight and air. The wide eaves keep the sun out during the sweltering summer but allow it to reach the back of the room when the sun is low in the winter. Veranda-like engawa adjacent to the yard provide a pocket of air that functions as natural insulation, making the interior more comfortable throughout the year. 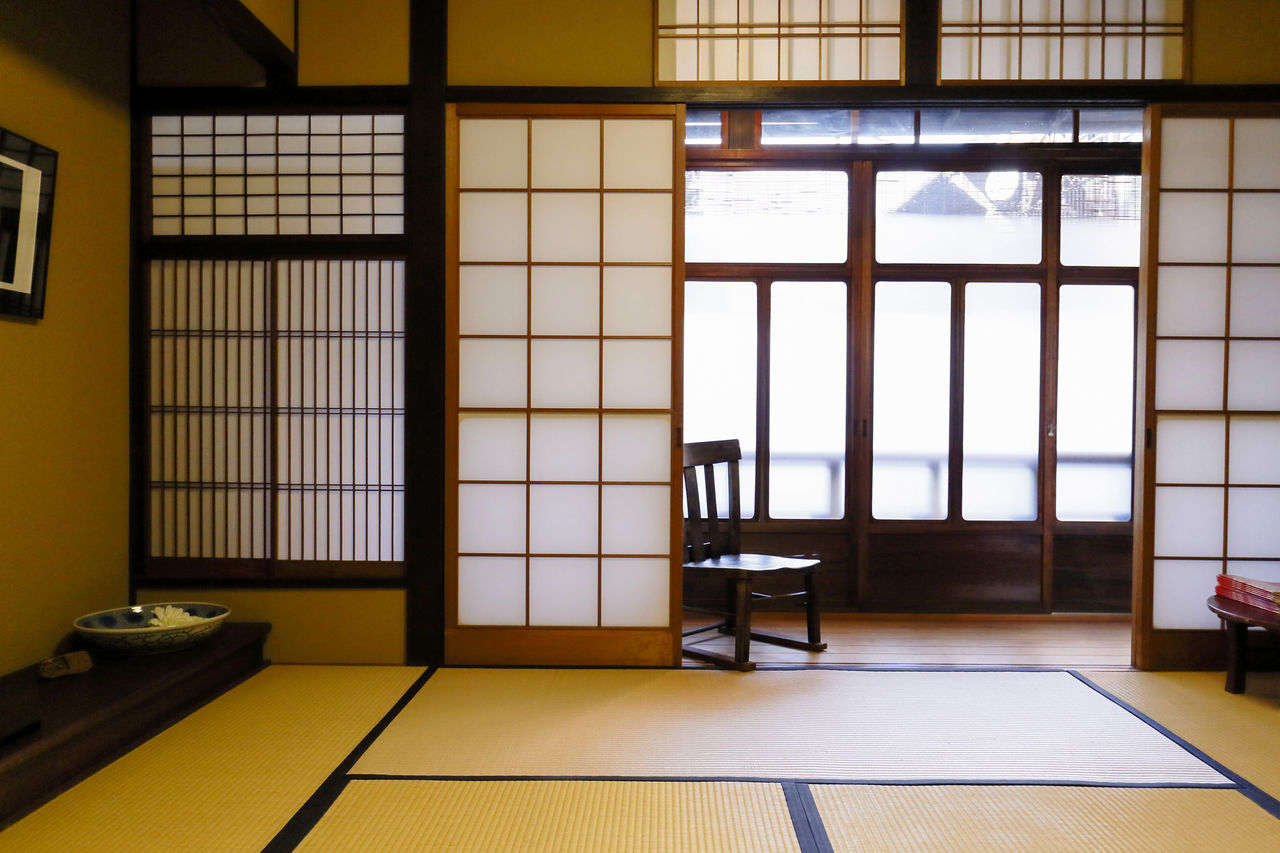 The engawa outside the shōji sliding doors creates an insulating effect.

Skylights that open and close not only transmit light from the roof but can also cool rooms by releasing heat. Courtyards, too, have a ventilating effect; the sprinkling of water in the street, called uchimizu, will create a minute gap in air pressure and pull air into the house and up through the open courtyard. By scattering water outside on a hot, late summer afternoon, machiya dwellers can look forward to a light breeze. 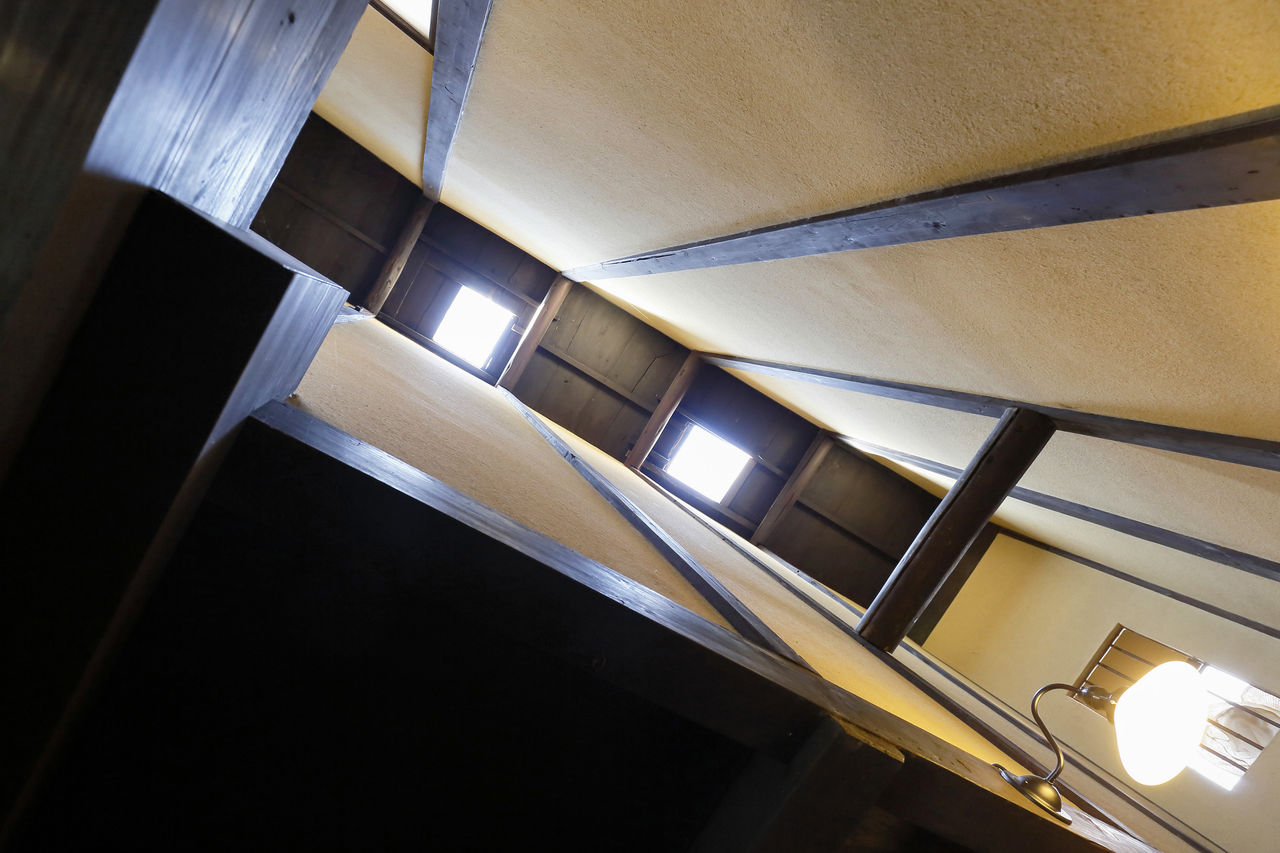 The tenmado skylight is a source of light and a means of releasing heat.

In addition to beams and columns, machiya are built with rows of nuki joints—similar to the second, lower horizontal rails piercing the pillars of torii gates at Shintō shrines. 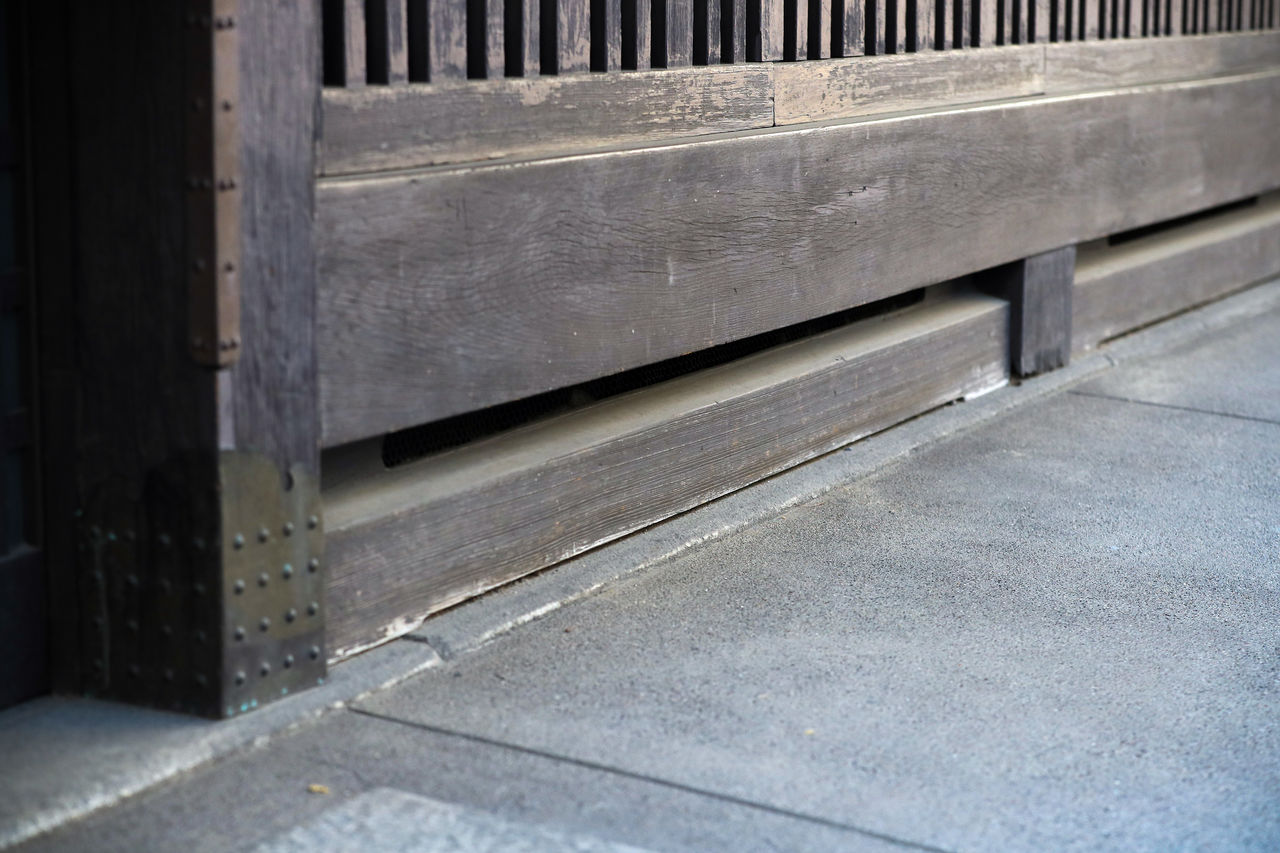 Pillars are not joined to the stone foundation so that seismic force can be isolated.

A Kyoto machiya is full of vertically and horizontally crossed pieces of wood, from lattices, shōji sliding doors, and the takekomai laths used for earthen walls to the columns and beams that form the basic frame of the house. There are almost no diagonal bracing materials. The building itself simply rests on a stone foundation without being conjoined to it.

Such features might appear as weaknesses when compared to modern architectural standards. But because the machiya offers little resistance, it is surprisingly resilient. Pillars will remain in place during earthquakes measuring as high as 4 on Japan’s seismic intensity scale.

“Earthen walls are rigid but delicate enough to absorb medium-intensity quakes,” says Matsui. “For bigger jolts, there is enough play in the wooden framework and nuki joints to disperse the seismic energy and keep the house intact.”

Because the house simply sits on top of the foundation, it can become decoupled from the substructure in the event of a massive earthquake, enabling it to isolate most of the seismic force. Thus the machiya is sturdy enough to withstand medium-sized quakes, has the pliability to survive large earthquakes, and can escape devastating seismic impact due to its base-isolating structure. This triple layer of earthquake resistance is gaining new attention from contemporary architects. 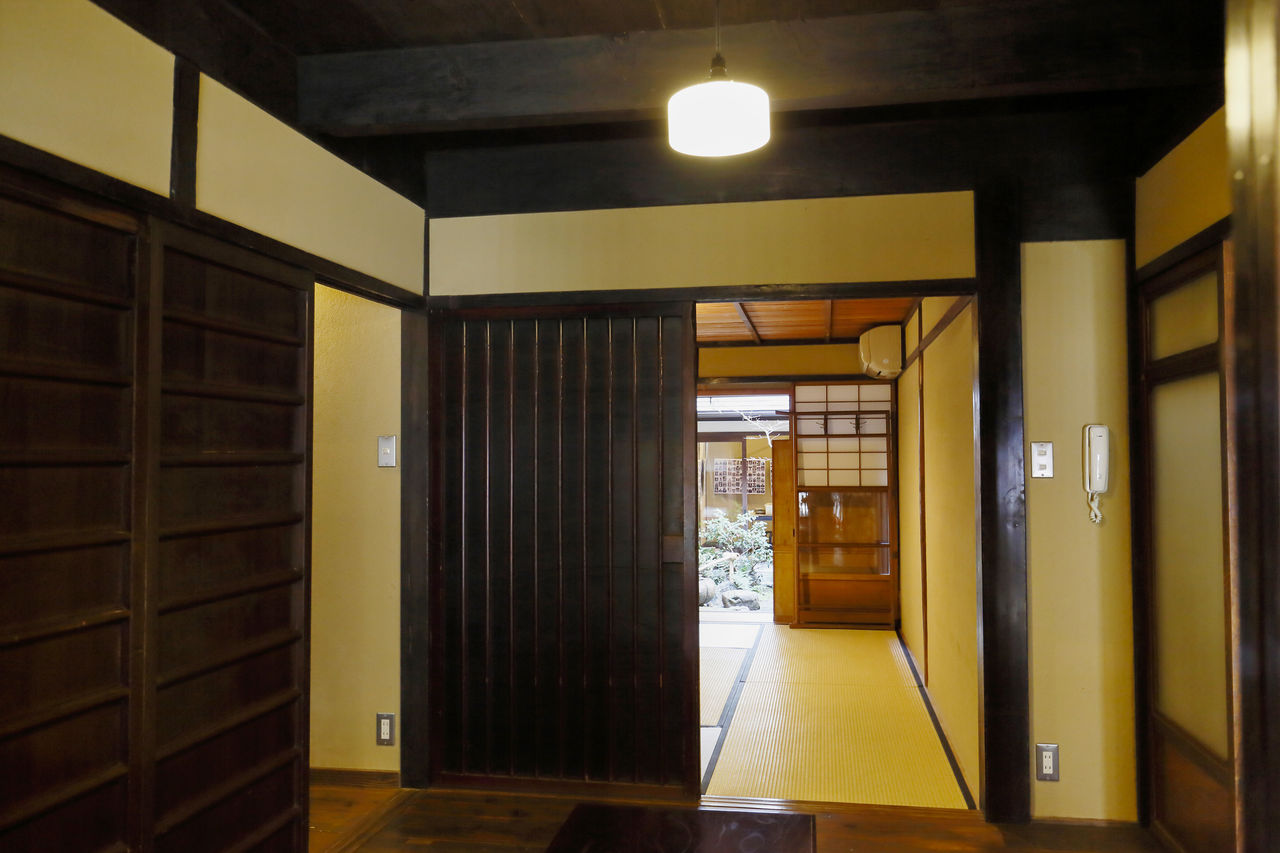 The use of columns and beams without diagonal bracing creates an aesthetically pleasing, neatly organized interior.

A Window to Society, Communion with Nature

Kyoto machiya are often referred to as unagi no nedoko (literally, “eel’s nest”), given their narrow frontage and deep, thin interiors. This style evolved during the Edo period, when property taxes were levied on the width of the front of the building. 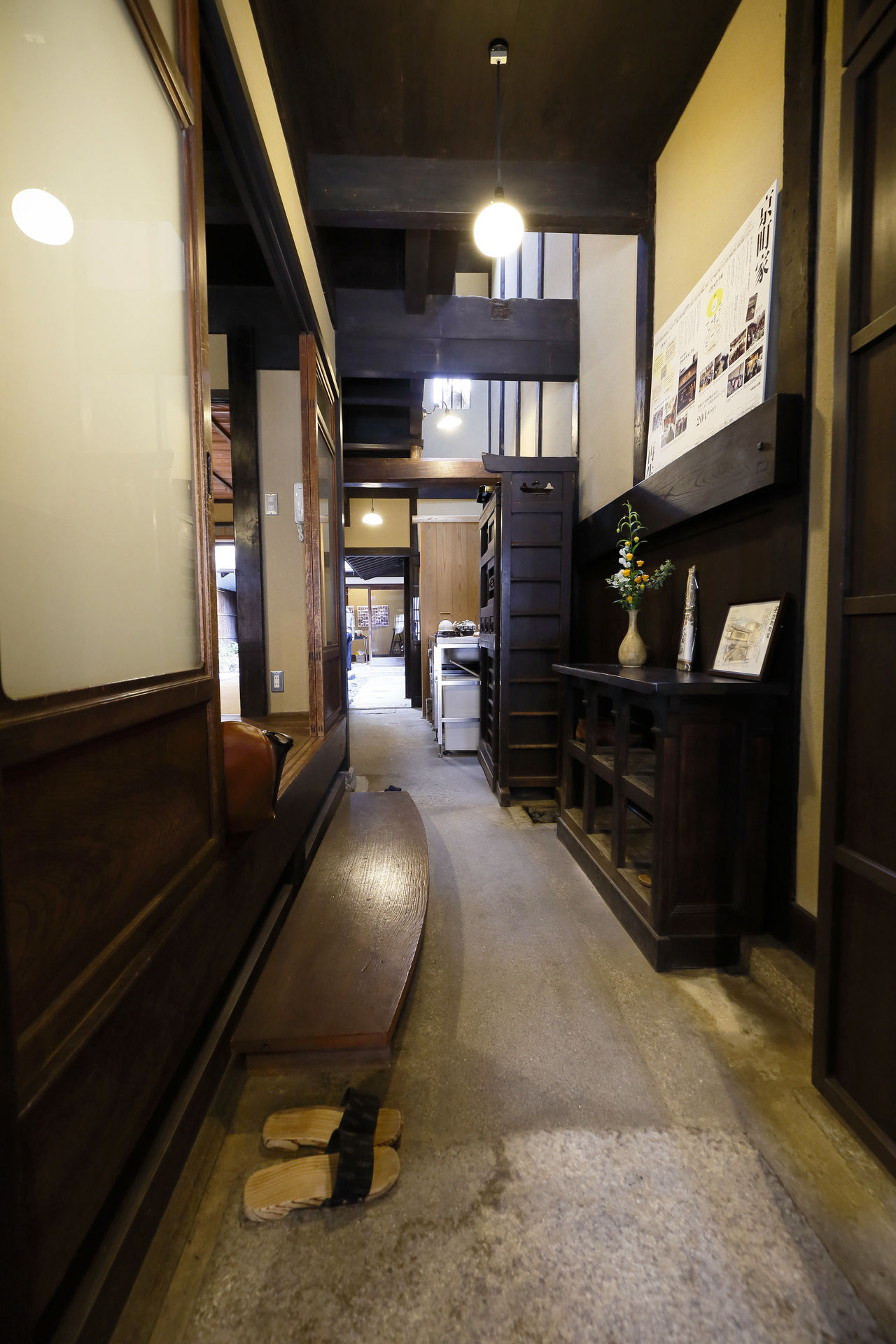 The storefront side facing the street was the point of contact with society, while the back of the building, with its inner courtyard, provided communion with nature. “Time flows differently, depending on whether you’re close to the street or in the back of the house,” Matsui points out. In the shop, there are rules to follow and deadlines to meet, but around the courtyard, time is your own. “When you move back and forth between the two areas, you realize just how fundamental the natural environment is to the functioning of human society.” 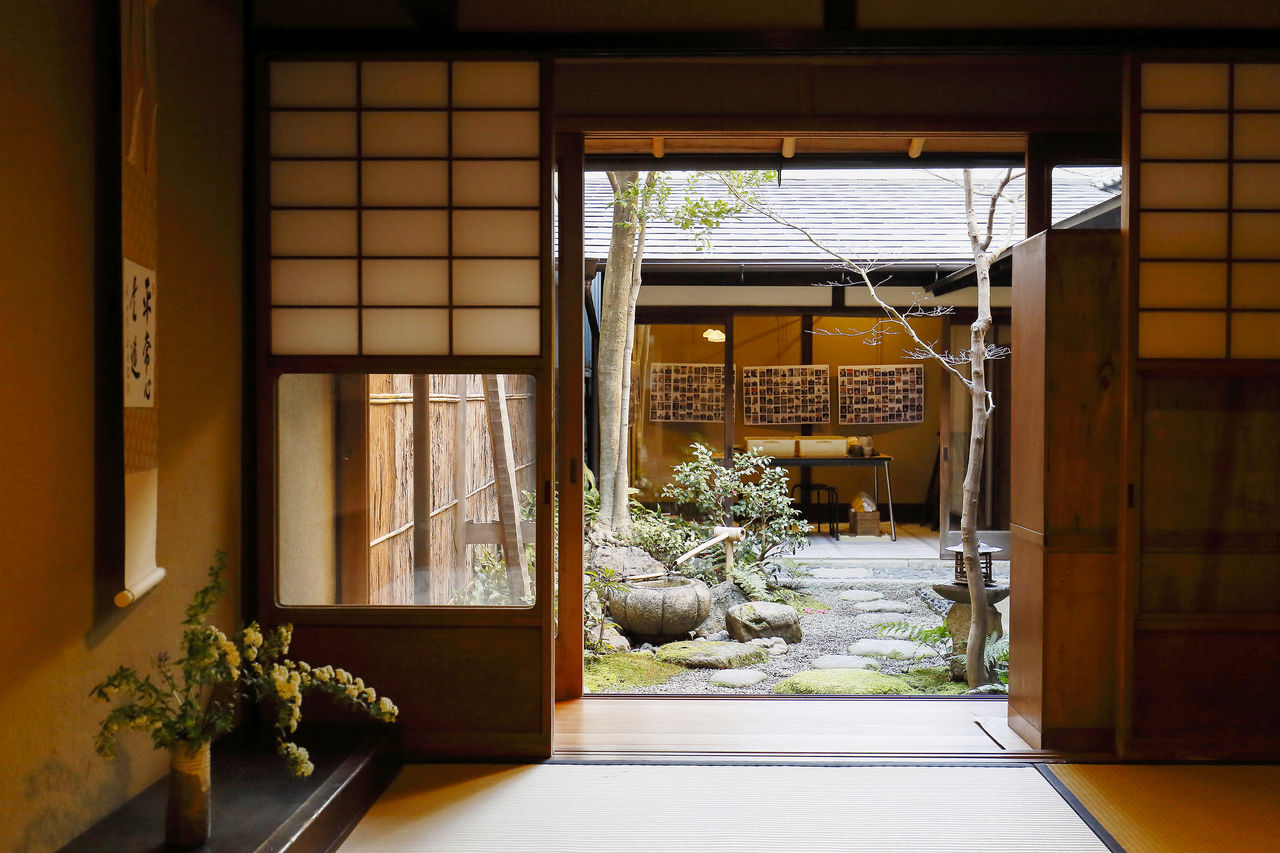 The courtyard allows the machiya to shift between its two distinct roles of a workplace and residence.

The use of natural materials can make us more alert to subtle sounds and plays of light and shadow, helping us attune to the gentle light filtering in through the shōji, the warmth exuded by the earth walls and exposed pillars, the wooden floor polished to a lustrous sheen, and the cool feel of the tatami in midsummer. 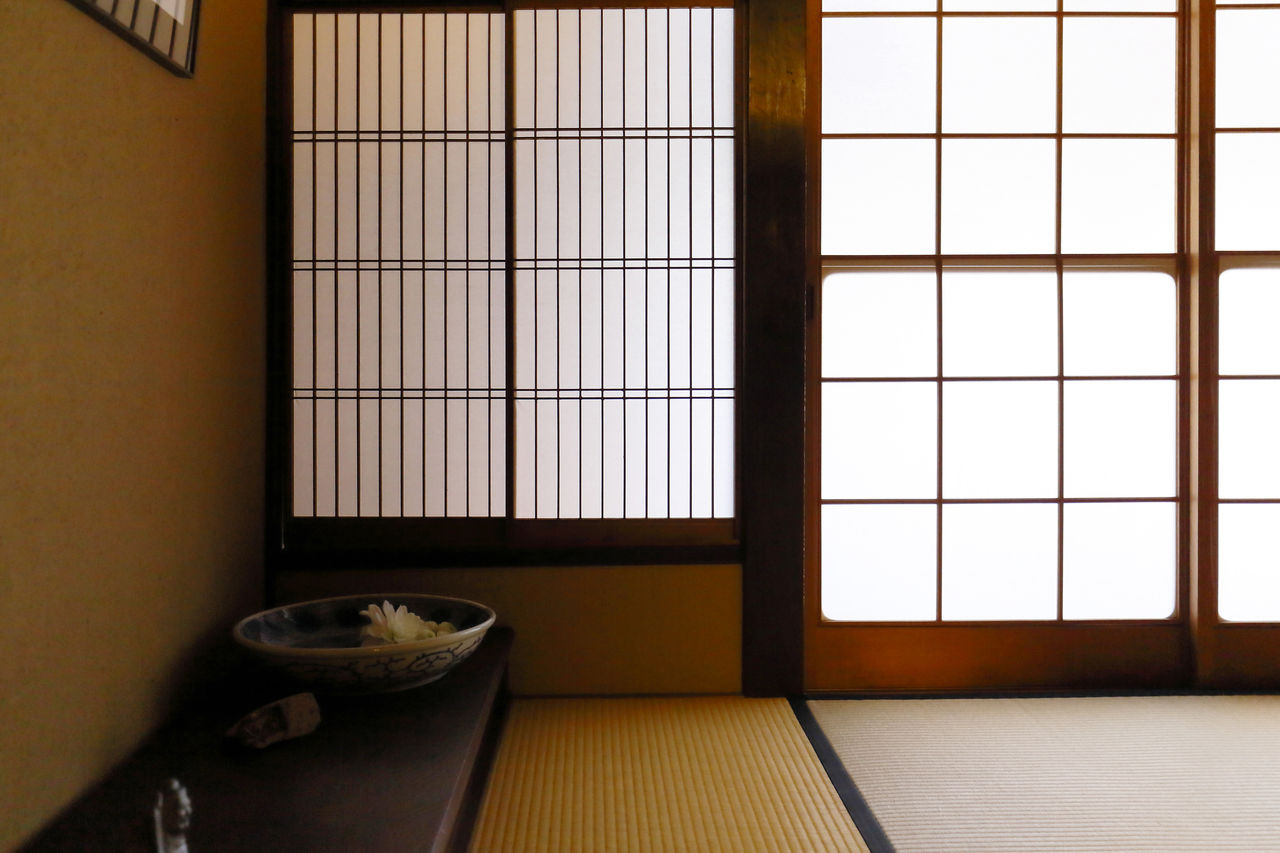 Soft sunlight passing through the paper of a shōji matches well to a tatami room.

“There’s a timeless quality to a machiya that can arouse our five senses,” Matsui says. “It can keep us grounded in the face of increasingly rapid social change. In that sense, I think a machiya is ultimately what modern society is seeking for.”

Perhaps the ultimate machiya experience is to sit quietly by oneself near the courtyard. Here, just a few steps away from the bustling street outside, is a world of peace and tranquility—a “mountain retreat” in the middle of the city. Spending time exploring the yard’s manifold expressions from different angles and positions and in shifting sunlight is sure to awaken the mindful being in all of us. 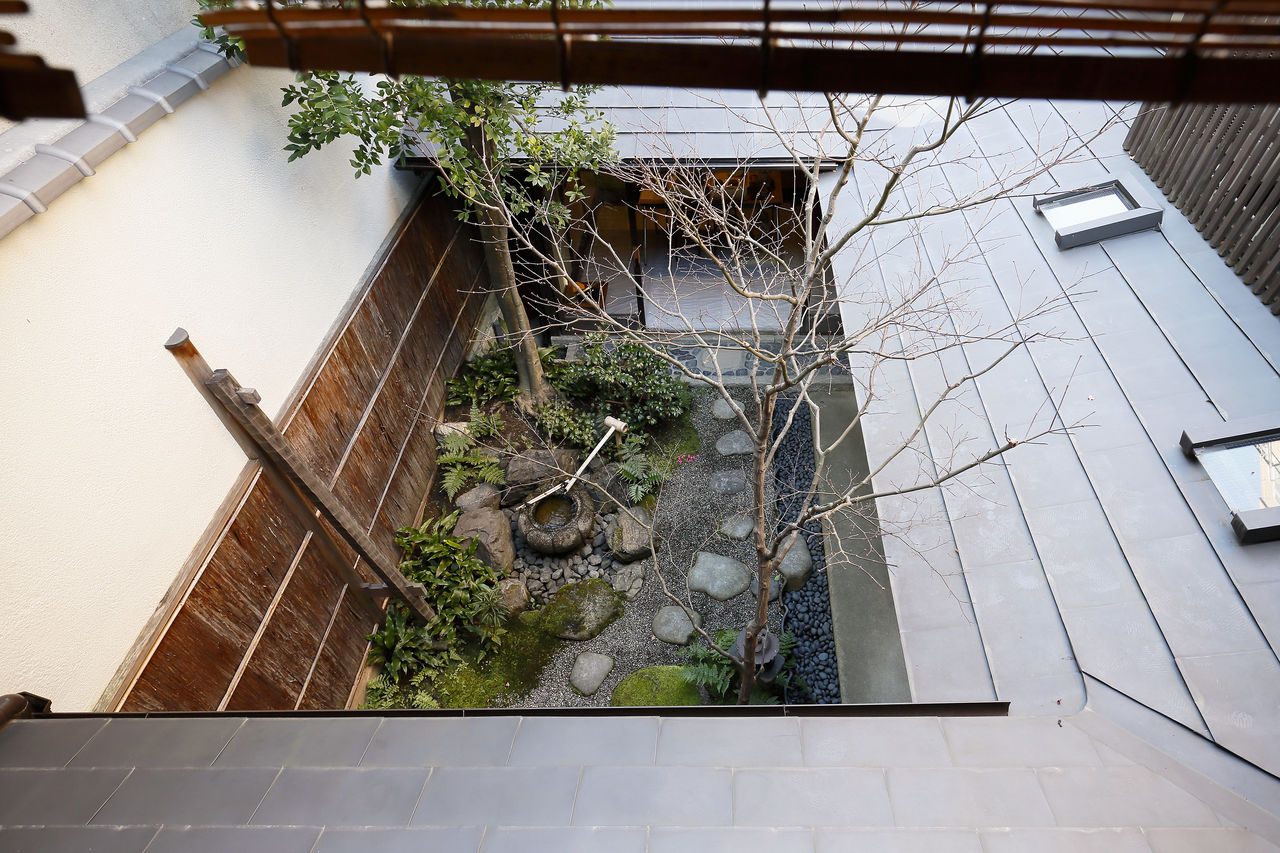 The courtyard allows air to flow through the house.

(Originally published in Japanese on May 7, 2018. Interview and text by Sugimoto Kyōko. Photos by Hamada Tomonori.)