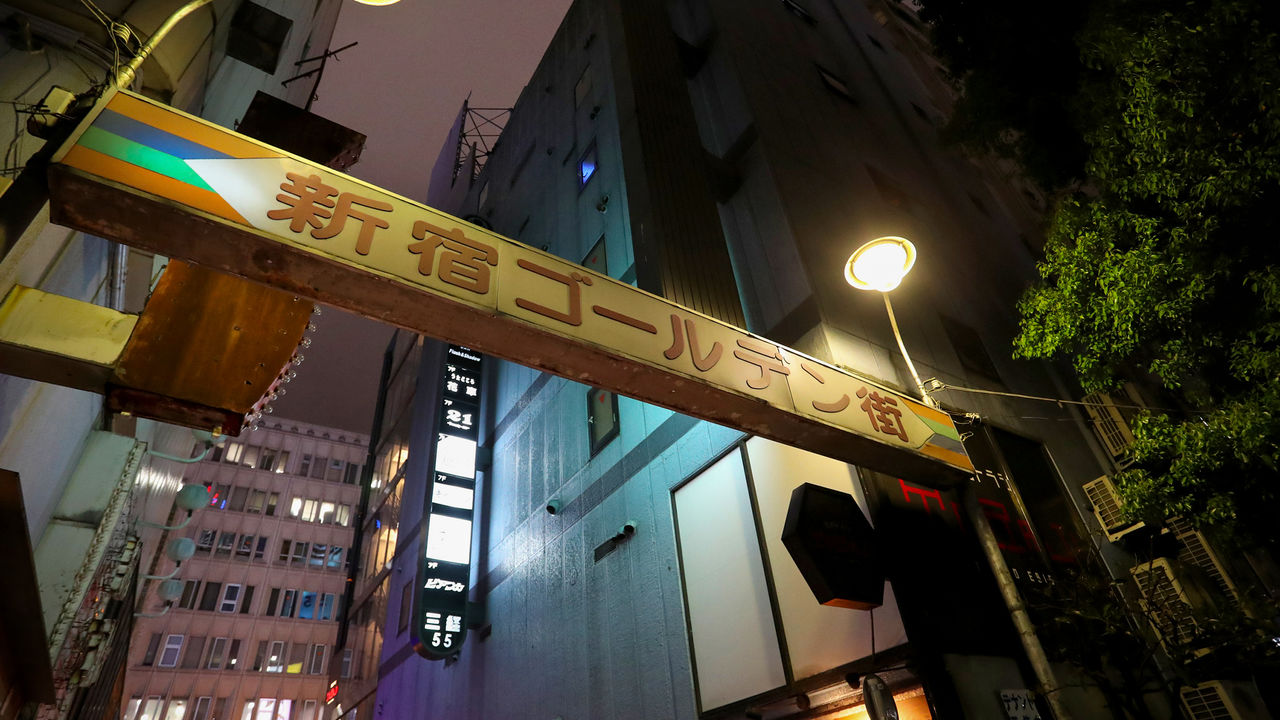 Oct 1, 2018
Once a black market and a hotbed of prostitution, Shinjuku’s Golden-gai district went on to become a favorite gathering spot for intellectuals who would debate until dawn. Now the generational turnover among bar owners has created a more welcoming atmosphere for all drinkers.

Golden-gai, in the heart of Shinjuku, one of Tokyo’s premier commercial districts, is a warren of hideaway-type bars that is becoming increasingly popular among foreign visitors who fill its lanes night after night. Five minutes’ walk from the east exit of Shinjuku station, Golden-gai is situated at the eastern edge of Kabukichō, a raucous, bustling entertainment area filled with restaurants, bars, movie theaters, and other places of amusement. But anyone setting foot in Golden-gai for the first time is bound to be surprised by the marked difference in atmosphere. 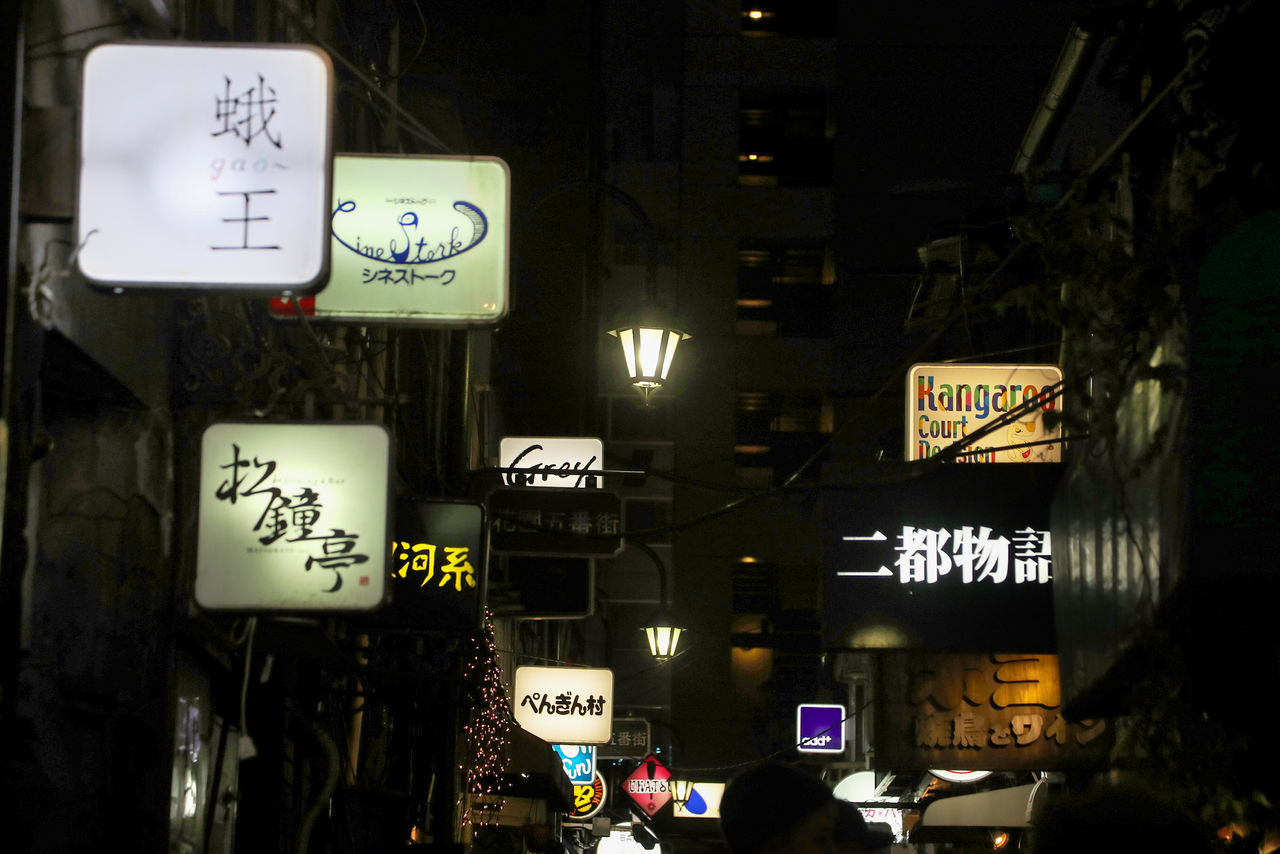 Over 280 tiny bars, each just 10 or 15 square meters in area, are crammed into Golden-gai, giving it a feeling quite distinct from other Shinjuku neighborhoods. The narrow alleyways are filled with people wandering about, looking for the next bar on their bar-hopping itinerary.

Nao-san, proprietress of the 45-year-old bar Nabe-san, has advice for those coming to Golden-gai: “Your adventure will be all the more rewarding if you know the history of the district before you come.” Here we present what’s good to know about the origins of Golden-gai. 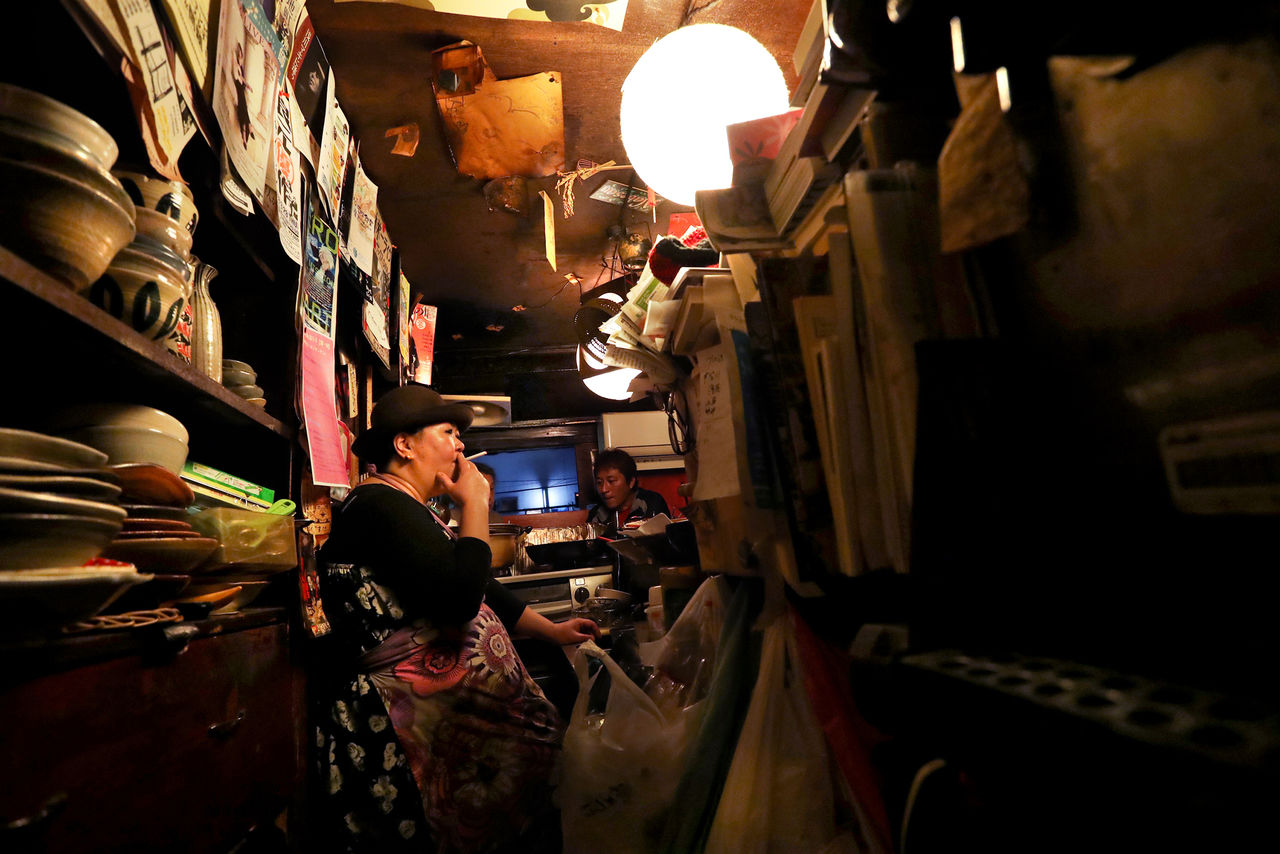 Nao-san surveys the scene from behind the counter at Nabe-san.

From Black Market to Red-Light Distric

Golden-gai sprang up in 1945, just a few months after Japan’s defeat in World War II. A black market that had abutted the east exit of Shinjuku station was relocated north to the present-day Golden-gai by the Occupation forces. Known at the time as Sankō-chō, the area had few buildings and was just a large expanse of weed-covered, unoccupied ground.

Running north-south along the western edge of the Golden-gai grid is Shiki-no-michi, which runs parallel to Kuyakusho-dōri, the street leading to the Shinjuku municipal office. Shiki-no-michi, created as part of a ward redevelopment project, is a parklike strolling area built along the tracks for a streetcar service that ran through here until 1970. The streetscape today is thus quite different than in the past.

Six streets run east-to-west through Golden-gai, with a seventh running north-to-south. The district has two business associations: one is the Shinjuku Sanko-chō Business Development Association, which covers the northern part of the district, and the other is the Shinjuku Golden-gai Commercial Association, for the southern part. The reason for the two associations, the former known as Sanko-chō and the latter Hanazono-gai, is that their members originally consisted of different types of businesses. In addition to restaurants and bars, Sanko-chō’s members included beauty salons and medical clinics, while Hanazono’s membership was much more amusement-focused. 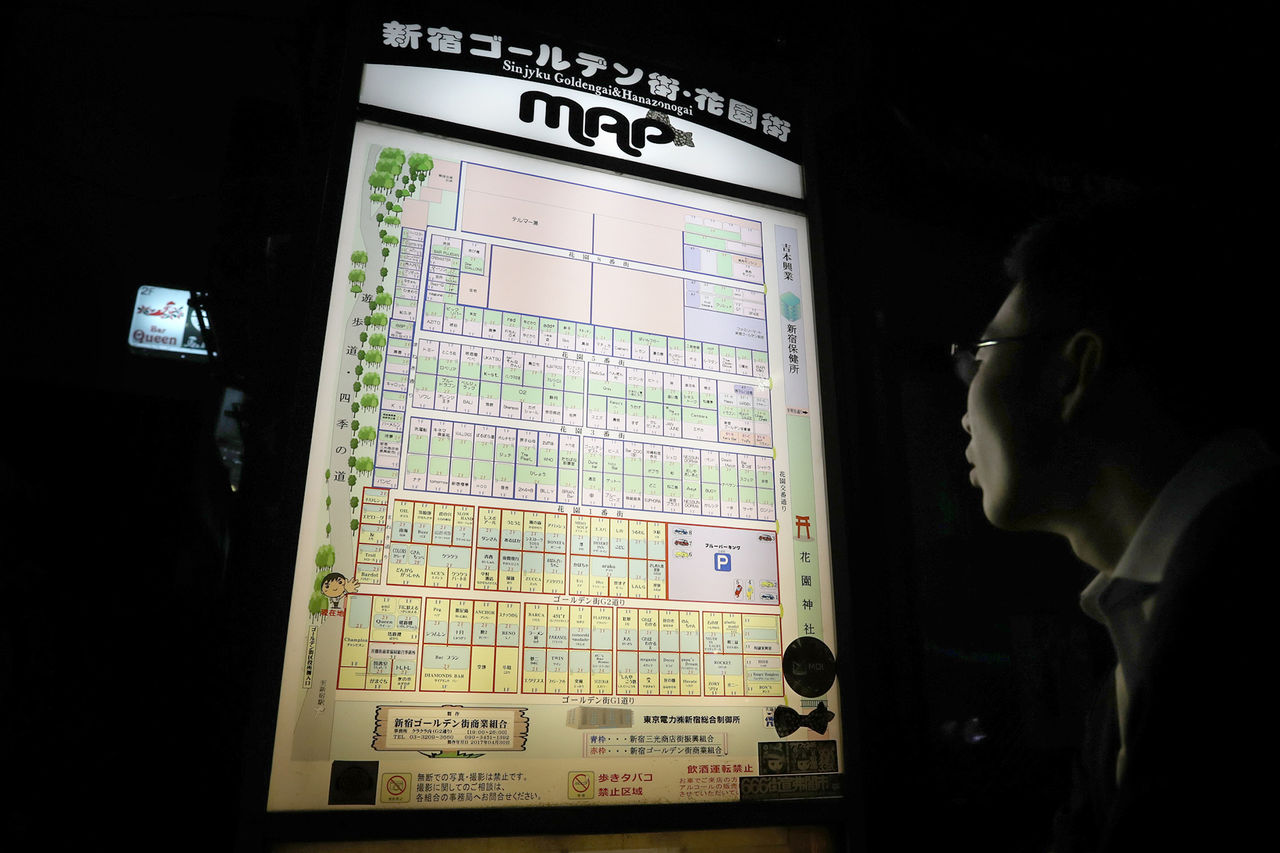 The map at the entrance to Golden-gai.

The rather louche atmosphere pervading the area is due to its rowdy past as an illegal zone for prostitution. Prostitution, practiced in regulated areas, was legal until 1958. Although Golden-gai was not a designated sex quarter, sex workers carried out a booming trade on the second and third floors of the buildings in the district; after prostitution was outlawed, those establishments became bars. That history, coupled with the tenements’ weathered appearance, contributes to Golden-gai’s slightly seedy air. 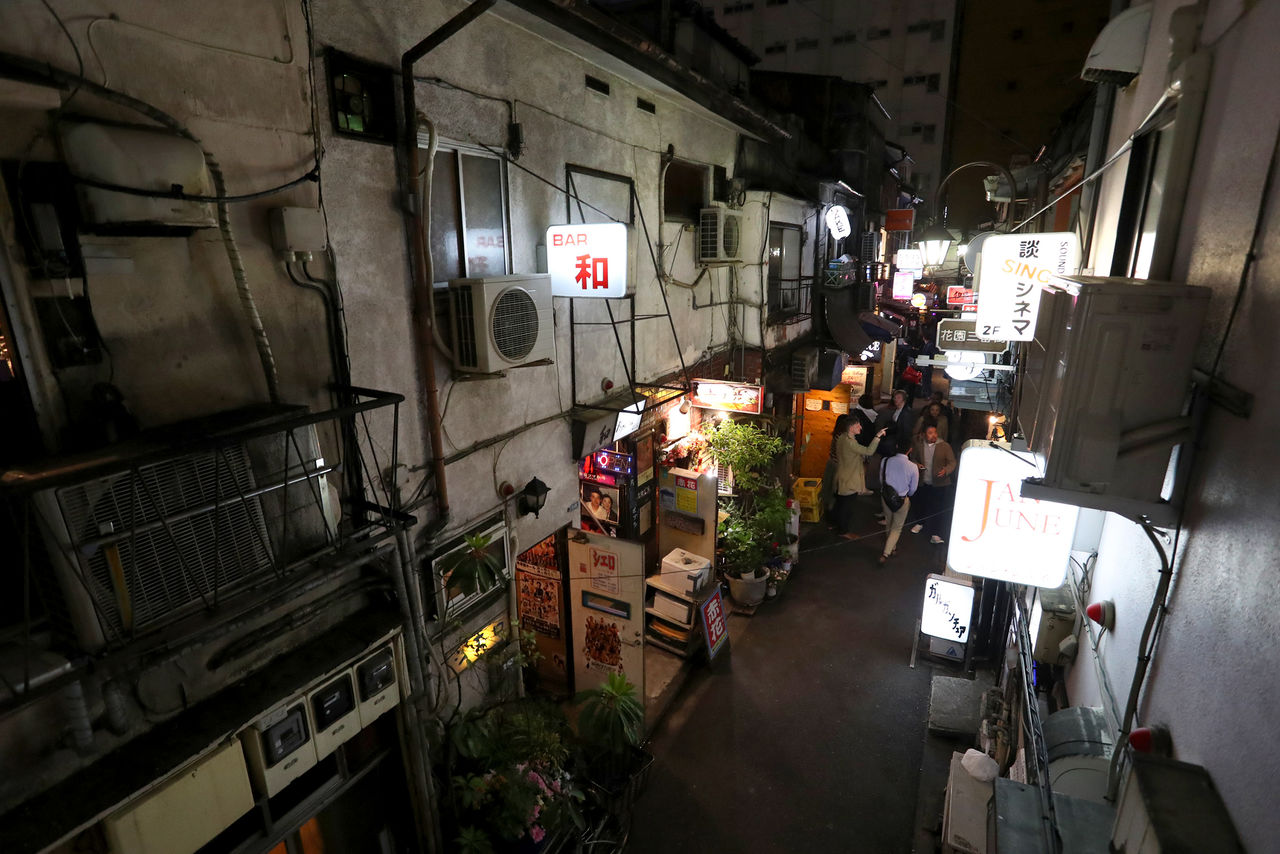 A Golden-gai street viewed from a second-floor establishment. Until the law banning prostitution was enacted in 1958, the upper floors were used for assignations between prostitutes and their customers.

Today a Place for Everyone

Starting around 1970, Shinjuku became a hub for a new kind of culture that manifested itself in music, films, theater, and art. Counterculture elements pushing back against mainstream culture gave the area a distinctive vibe, making it a gathering place for all kinds of intellectuals, from writers and poets to actors and media people. Here they would drink, debate, and discuss all manner of topics until the sun came up. Among a certain crowd, Golden-gai is still the place to go to for intellectual stimulation. 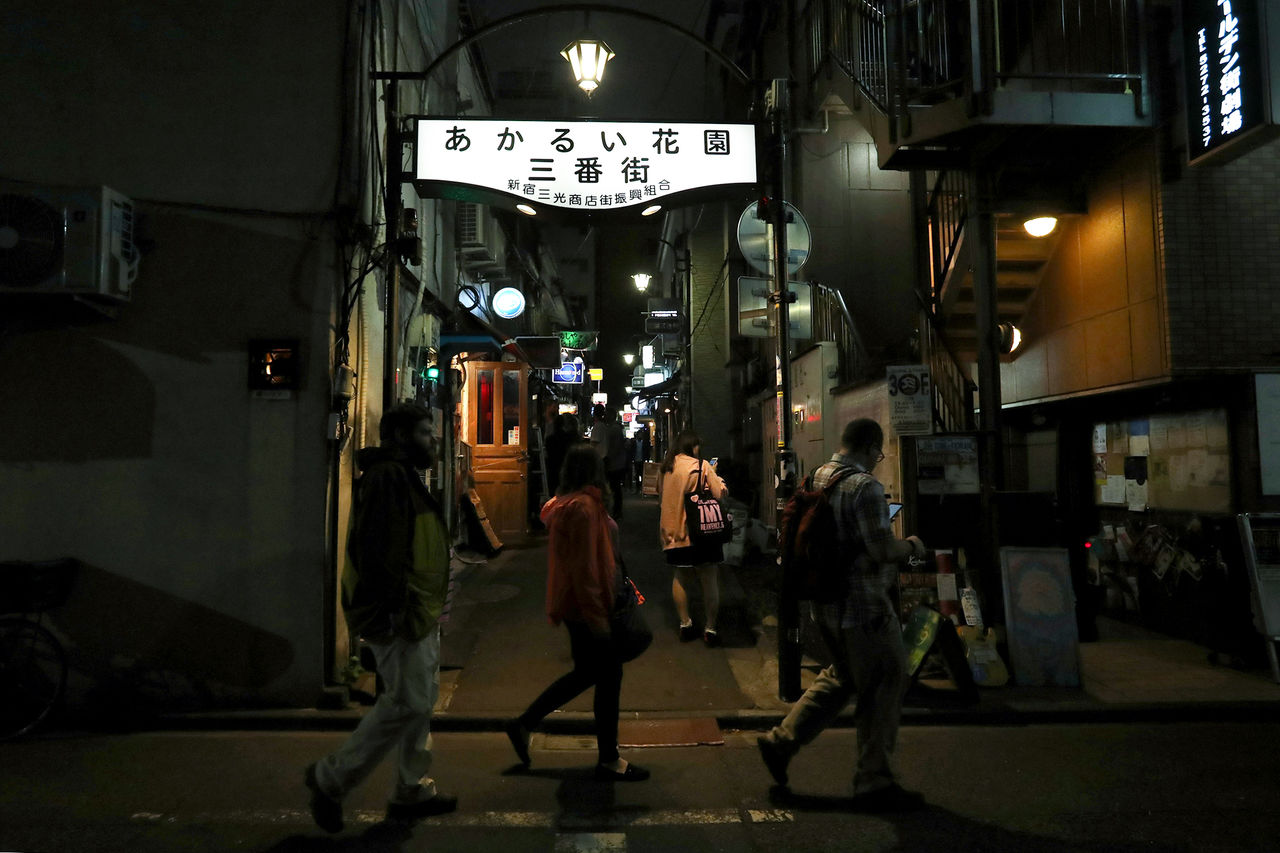 Sanbangai is where Golden-gai’s distinctive atmosphere remains most in evidence.

A Golden-gai regular, writer Tanaka Komimasa, described the district in these words in his 1978 Shinjuku furafura zoku (The Wandering Tribes of Shinjuku). “Hanazono’s Golden-gai, formerly a red-light district, has an atmosphere all its own. It’s not a place where regular office workers go to drink.” In those days, hard-drinking intellectuals would engage in heated discussions about literature or politics. As a whole, Golden-gai was viewed as a dubious place with a disreputable atmosphere that kept more upright members of society away. 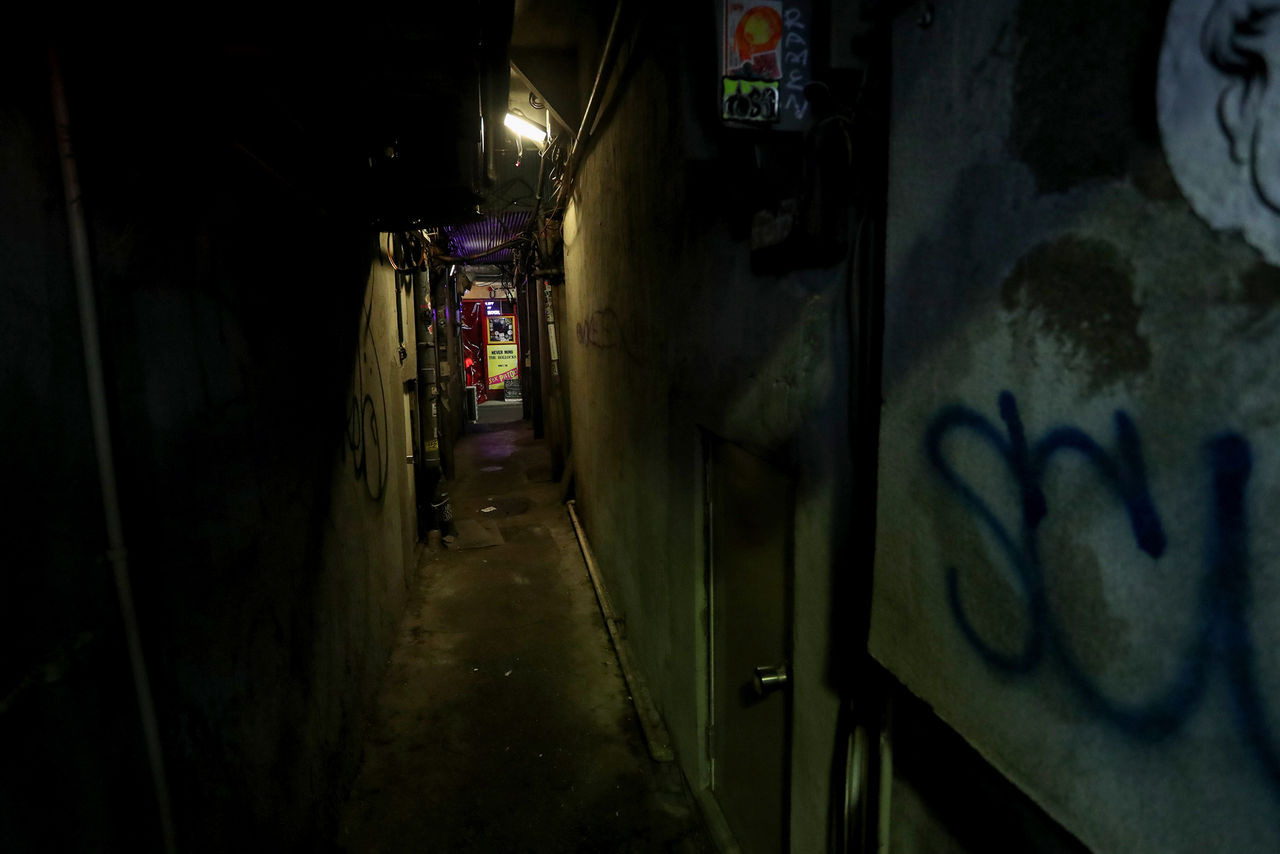 Golden-gai’s alleyways, redolent of Japan in the 1950s and 1960s, attract foreign visitors.

During the bubble economy years of the 1980s, Golden-gai’s existence was threatened by developers who tried to buy occupants out, sometimes using underhanded tactics. But in another of its many comebacks from the brink, the area survived and is today enjoying renewed popularity as a place to sample the atmosphere of bygone days.

Some of the establishments are run by younger owners now, who have redecorated their premises to make them brighter and inviting. But the old and the new have settled into a happy coexistence in Golden-gai, which has changed and now attracts a much more varied range of customers among men and women alike. Added to the mix are foreign visitors, making Golden-gai more vibrant than ever. But whatever changes have taken place at Golden-gai, one thing remains the same: it’s a great place for the tipsy, and revelers’ voices echo through the night until dawn, just like they always have. 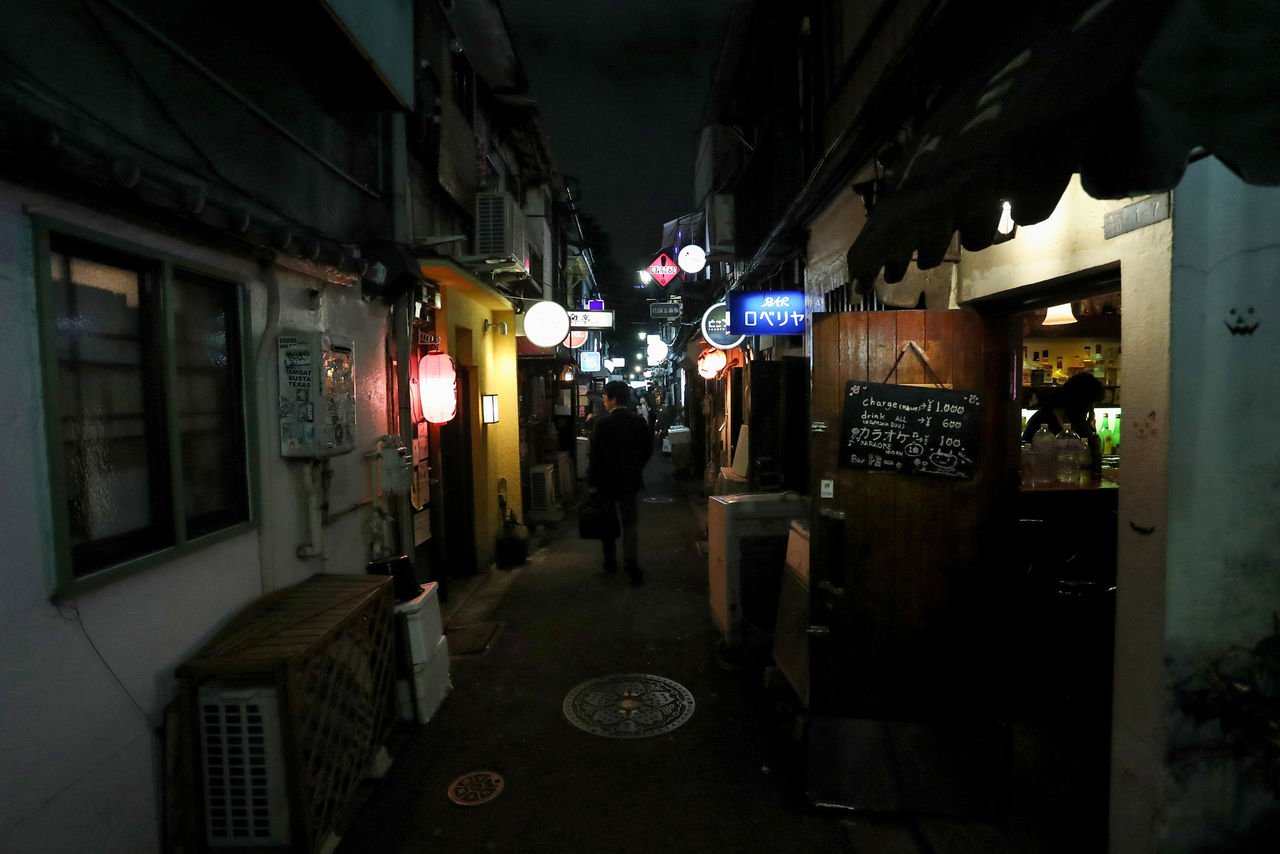 Bars along Hanazono Gobangai. In recent years, a growing number of ordinary office workers have discovered Golden-gai as a place for solo bar-hopping.

(Originally published in Japanese. Reporting and text by Yamashita Kazuki. Photos by Kubo Takahiro. Banner photo: The portal sign at the entrance to Golden-gai.)